Skip to content
American Motors joined forces with Giotto Bizzarinni in 1970 to produce an affordable mid-engine GT. Unfortunately only a handful were produced. 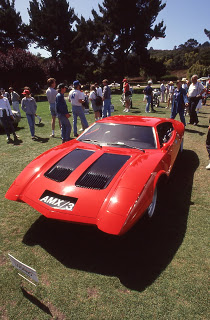 Unquestionably the finest design to ever come out of American Motors (AMC), the AMX/2 Concept and AMX/3 sports GT could’ve been a contender. Even though AMC’s 390-inch V8 was a very competent engine, it did not have the cache and performance potential enjoyed by big and small blocks from Chevrolet and Ford. But the project did not die because of engine choice, but rather by manufacturing costs and pricing that would’ve put it head-to-head with lusted-for Italian exotics. The slick Ford-powered Pantera later came in
at a price that AMC could not compete with.

AMC shipped the AMX/3 body mold to Bizzarinni’s Turin facility where it was generated road-worthy GT bodies. The single-four-barrel 390 engine, as used in AMC Javelin and AMX, put its power to the pavement via an OTO-Melara transaxle.

Steel-bodied Hybrids made use of a 105.3-inch wheelbase Bizzarinni platforms and BMW Engineering handled final performance testing. Between upcoming bumper regulations
(1973) and escalating production costs, the AMX/3, above, (photo by Brain Snelson),  program faded into obscurity.

For more information about the AMX/3 and its development, please visit our friend Mike Gulett’s My Car Quest,
http://mycarquest.com/2013/05/american-motors-and-bizzarrini-team-up-on-the-amx3.html

Check these other sources: http://www.motortrend.com/classic/roadtests/c12_0509_american_motors_amx3/viewall.html