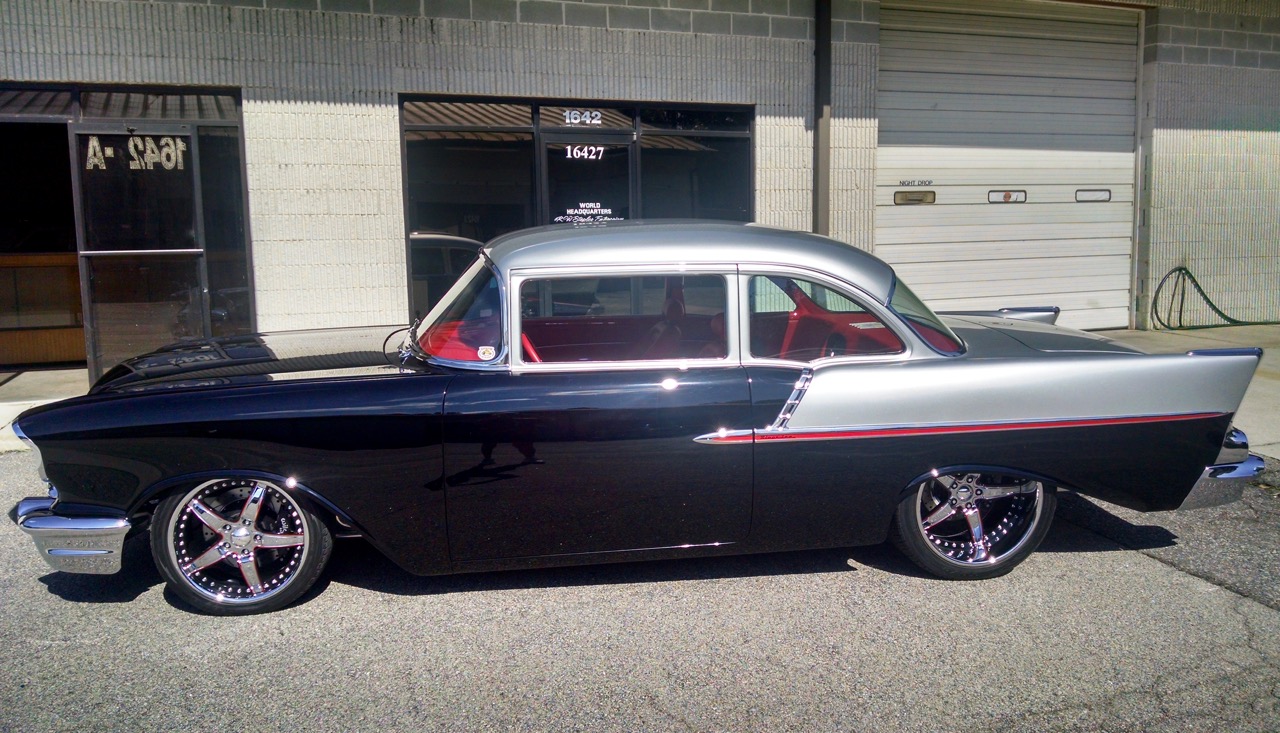 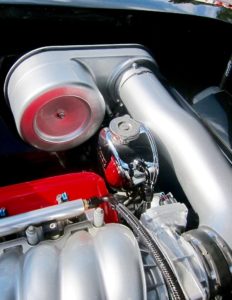 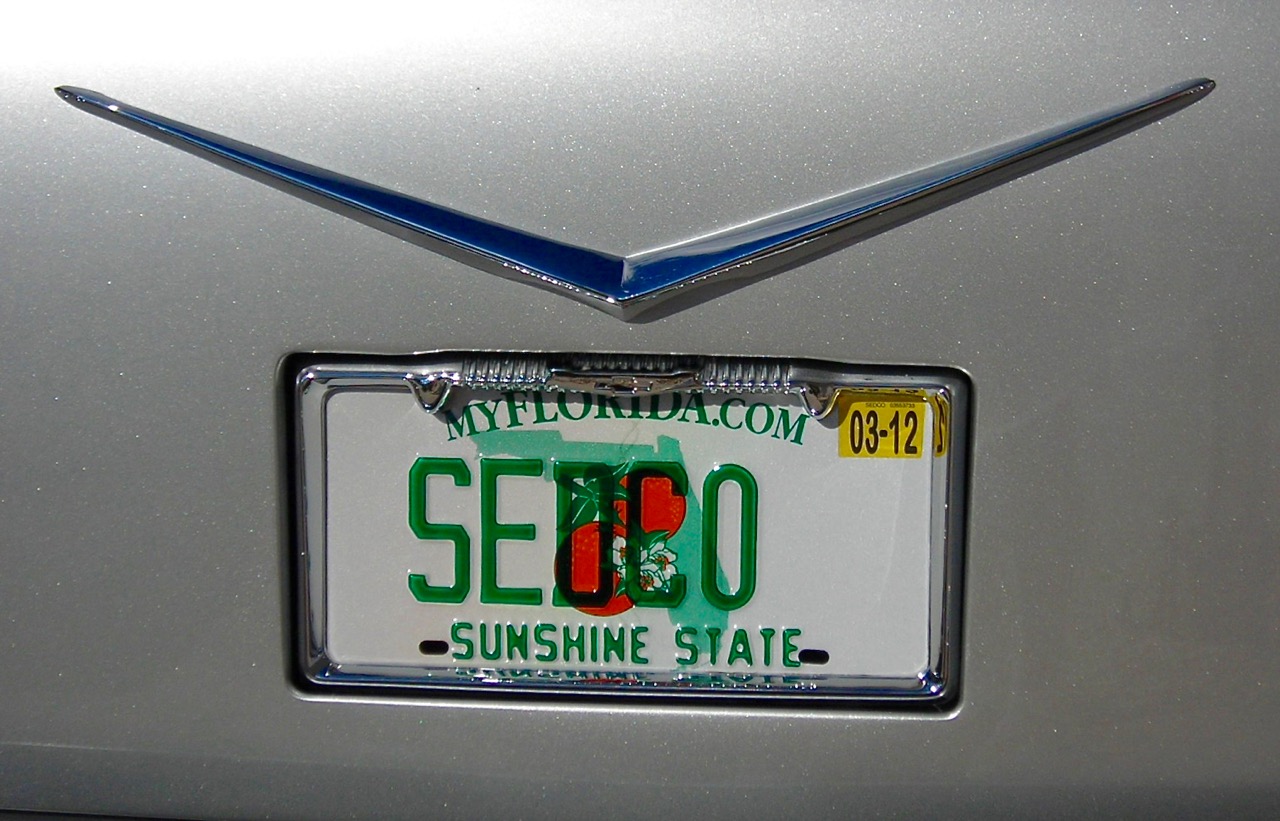 Heading up SEDCO, with blessings from GM Vice-President and Chevrolet General Manager, Ed Cole, was Vince Piggins, former chief Engineer at Hudson and later credited with the Z/28 Camaro, ZL1 Camaro and a host of 1960s-1970s high-performance Chevrolets. SEDCO was best known for its fuel-injected black & white ’57 Chevy 150 two-door (Black Widow) sedans that first appeared in February 1957 at Daytona during NASCAR Speed Week. Buck Baker won a national championship in a Black Widow in 1957. The SEDCO operation was shut down mid-year in accordance with GM signing on to the absurd AMA racing ban.

Over the years there have been sightings of hundreds of cloned Black Widows, ranging from simple hot-rodded black & white ’57 Chevys two-door sedans to restored exact replicas that could pass as real. Ronnie Staples’ SEDCO Supercar, even though its paint scheme has not been cloned, is in a class by itself. It boasts a modern chassis and powertrain, and custom touches – many not noticed at first glance – that set it apart from all other variants on the Black Widow theme. Plus, it showcases a concours-quality execution that shouts, “Best in Show! 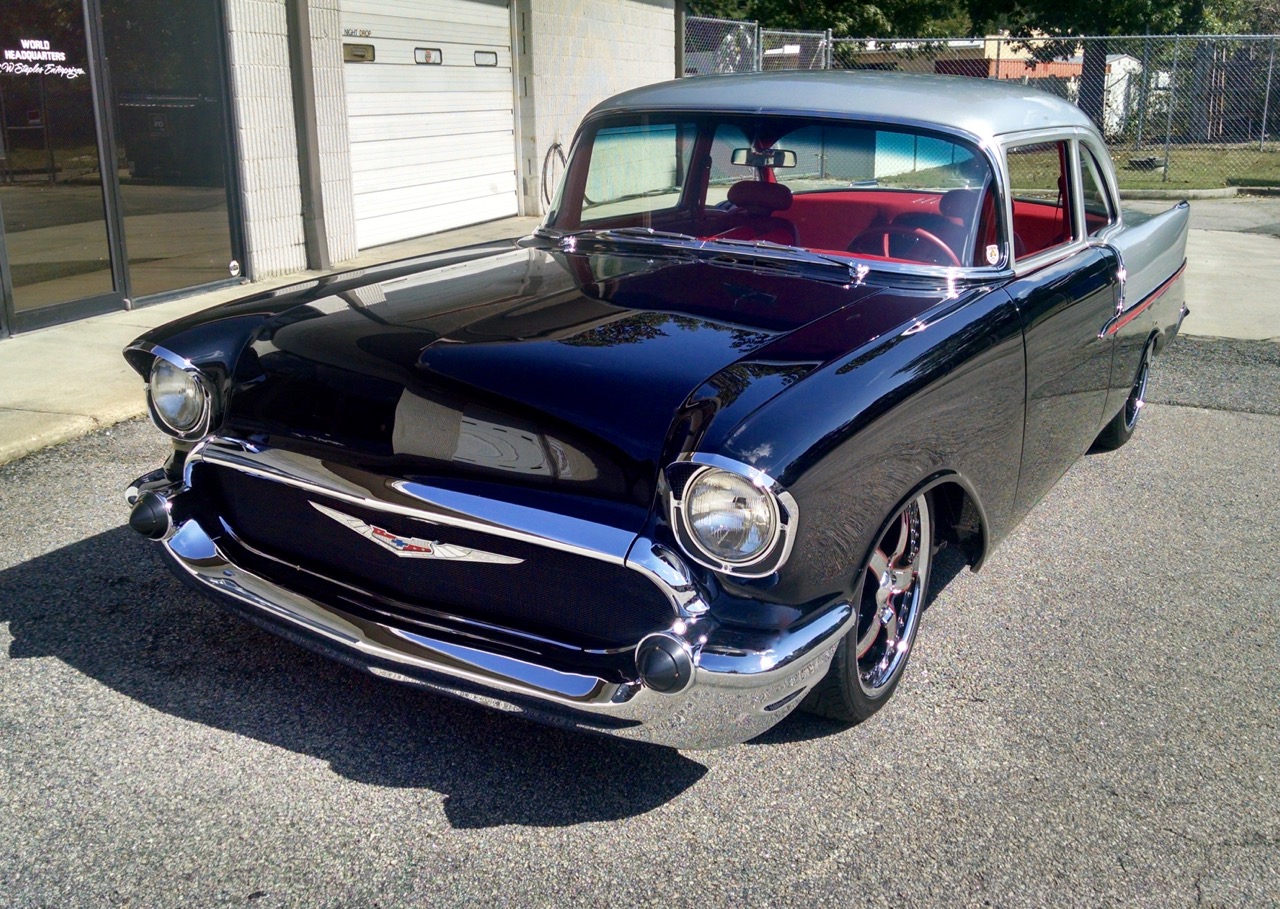 One day after his 15th birthday, Ronnie Staples took his driving test in his parents’ ’57 Chevy 150 two-door, a yellow & white, six-cylinder, three-speed “stripper” with a single sun visor and no radio. He scored a perfect 100 points. That was 1959, and his ties to a ’57 Chevy two-door sedan continue to this day with the ‘57 CHEVY: BLACK WIDOW REDUX.

The Chevy 150 donor car, rust-free and with all original sheet metal, for this custom build was acquired in California in the late-1990s. Marty Martino, a friend in Gum Springs, VA, came up with the concept of turning this two-door sedan into a business coupe by shortening the roof eight inches, along with cutting the quarter windows and garnish moldings. Vent windows were removed and all new glass installed. It’s truly one of none as most carmakers, including Chevrolet, stopped building Business Coupes in 1954. Now Ronnie Staples had a ’57 Chevy 150 Business Coupe.

Marty and Ronnie had worked together on a two of his cars prior to the Black Widow variant: A pinch-nose ’33 Ford three-window coupe and a chopped and sectioned ’48 Ford convertible. The ’57 Chevy’s roof mods were finished around 1999 and it sat unfinished for a few years until Ronnie decided to jump back in and sketch and lock in a series of modifications, They led to how his 150 Business Coupe looks and runs today. 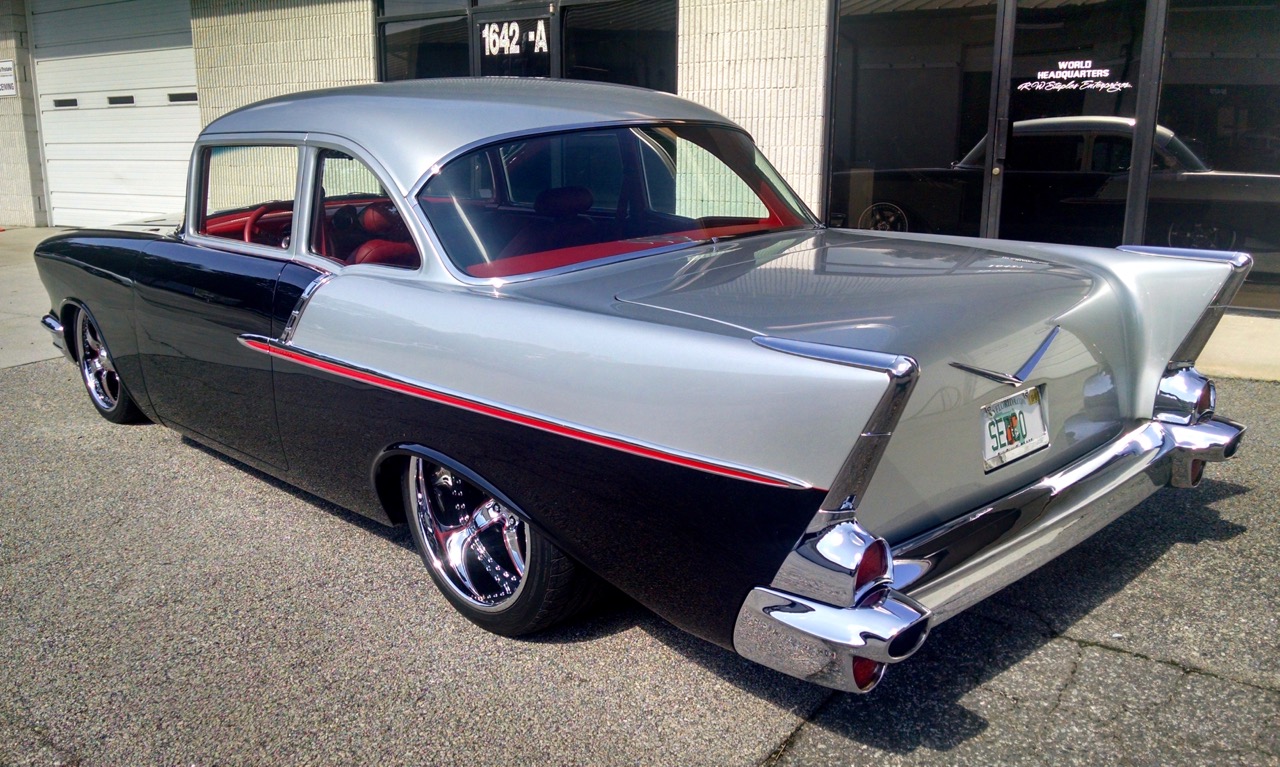 There were more than 90 changes made during the car’s build. The fenders are “pie cut” 1 ½ inches, front to back, lowering the headlights and insuring that the tops of the fenders line up with the hood instead of going up from wheel wells forward. Ronnie wanted the fender top grille eyebrows to match the curves in the bumper.

Nelson Cunningham, New Visions Auto Body and Paint, in Chesterfield, VA did all the rest of the mods in his shop. The pot metal upper grille eyebrows were shortened approximately four inches after narrowing the bumper two inches on each side. Front bumper “Dagmars” were replaced with five-inch exhaust tubing welded to the bumper, then fitted with stock rubber tips. Three LED lights function as turn signals. Grille is from a fireplace screen!

After narrowing the grille area, the stock parking light bar was too big and was replaced with ’60 Corvair (dealer-installed) hood emblem with tri-color bow tie and chrome bezel with wings. Headlight bezels were fitted to the fenders without traditional rubber seals. The hood’s “rockets” and metal “teardrops” were removed and later used to fabricate the interior’s custom console. Like a Corvette, the hood is hinged at the rear.

The windshield is from a two-door hardtop, 1½ inches shorter than used on a sedan. They cut the top over the driver/passenger head area, rolling it down to meet the shorter windshield and straightened the A-pillars. At the rear, wheel wells were raised 1½ inches and extended four inches. Side trim from a ‘55 Chevy Bel Air with painted inserts was lengthened eight inches to fit the quarter panels of the ‘57 CHEVY: BLACK WIDOW REDUX. 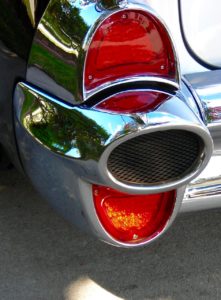 Rear fin trim, taillights and bumper are tucked tight to the body. A second pair of taillights was flipped upside down on the lower bumper ends. Exhaust is routed through the bumper fixtures that formerly housed backup lights. Stock Chevrolet script on deck lid was removed, license plate was moved up, recessed and hinged hiding the trunk lock. 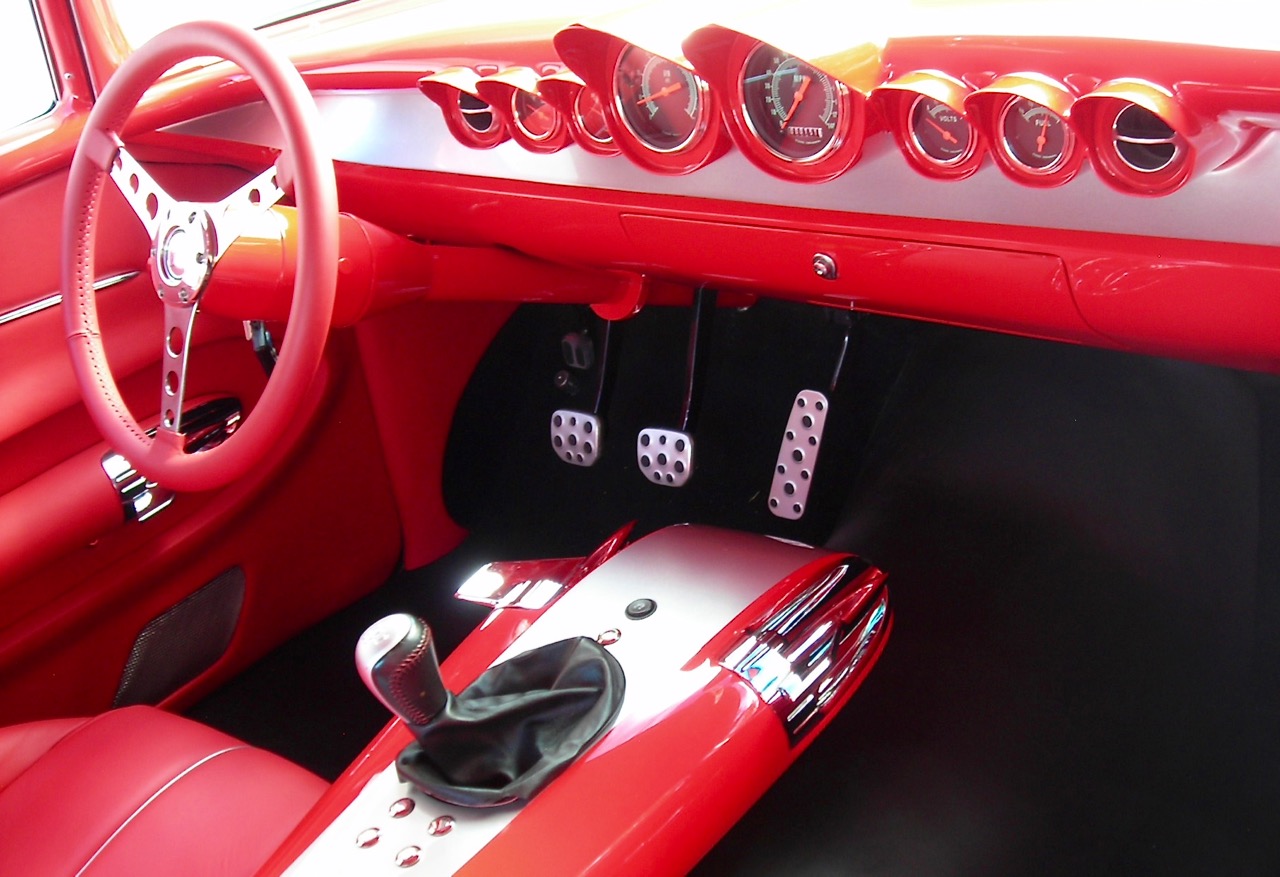 Exterior modifications strongly influenced the interior design. The stock instrument panel was removed and filled and the custom tachometer and speedometer were fitted with 5-inch exhaust tubing mounts and bezels that match the headlight bezels. Balance of gauges and the AC vents utilize 2 ½-inch exhaust tubing mounts and bezels. The glove compartment and ashtray lids were welded together to eliminate any extra lines, or breaks, in the ultra-smooth dash. 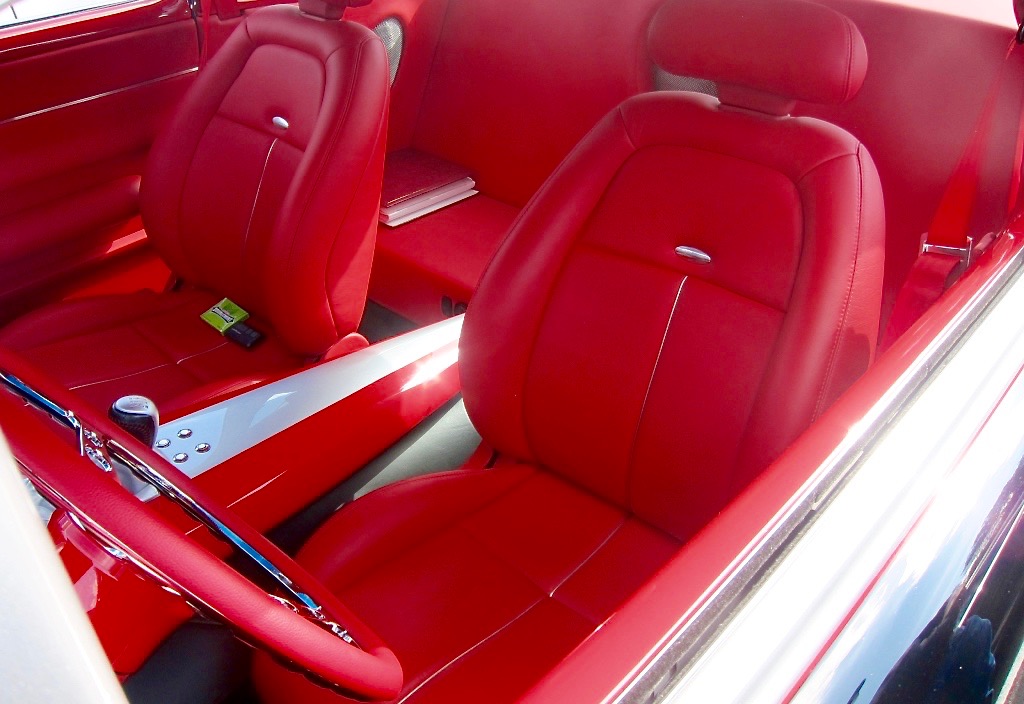 Flanking the handcrafted console is a pair of red leather 1990s Saturn bucket seats, with cut head rests. Additional hood rockets are on the door panels. A storage platform replaces the rear seat. A six-button key fob operates doors, windows, and functions as the ignition switch (in addition to an interior mounted push-button). 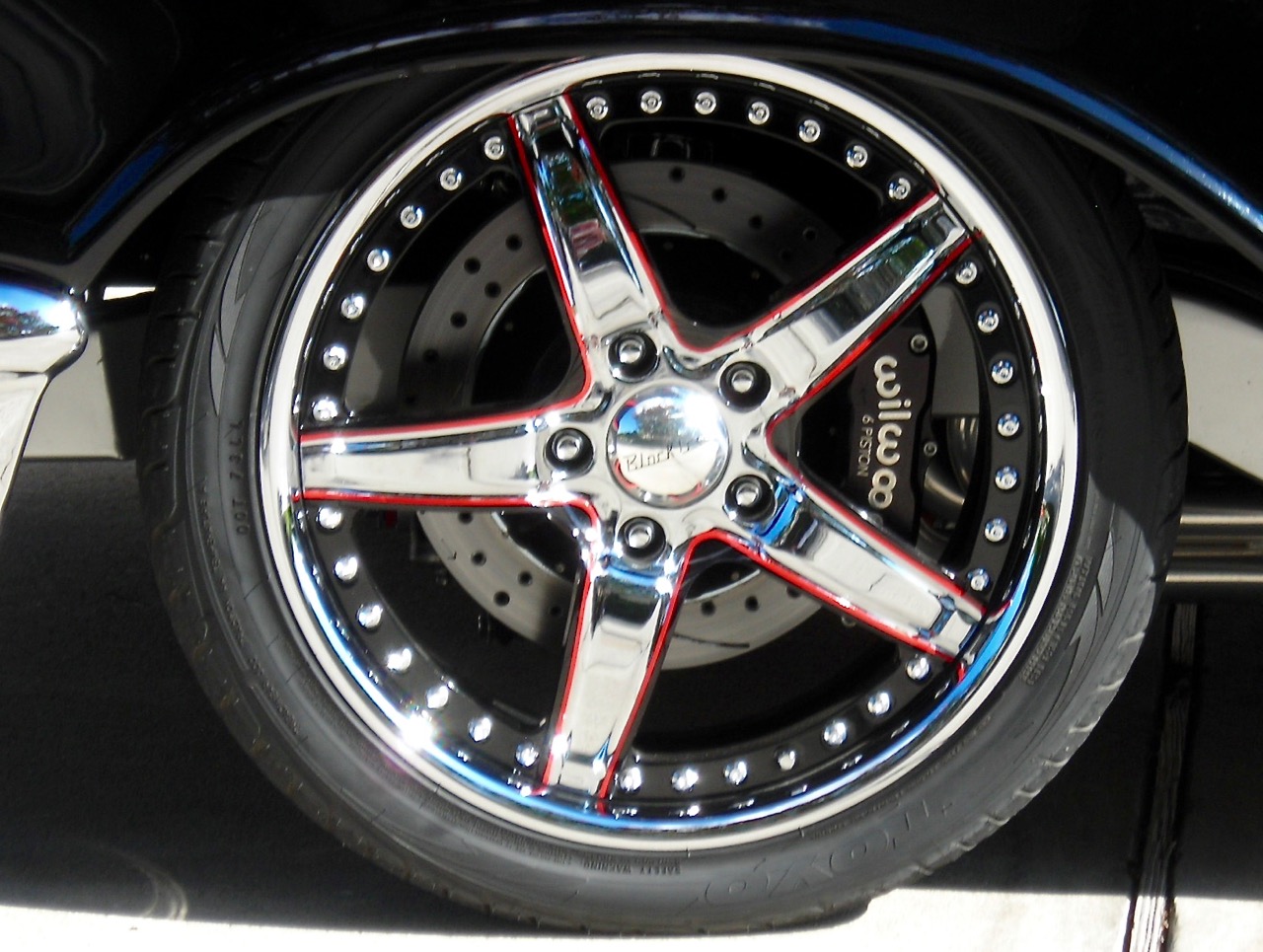 Ronnie Staples’ Resto-Mod Chevy has been re-engineered as well as re-designed! Under it’s head-turning body is an Art Morrison chassis, tucked in an extra 2 inches in the rear for the 20×12-inch wide custom Boze wheels fitted with 315.35×20 tires. Suspension mods include front tubular A-arms, coil-over shocks, power rack and pinion steering, and Wilwood 12-inch, 6-piston disc brakes all around. At the rear there’s a four-link, coil-over suspension with a 9-inch Ford rear with 4.10 Posi gears. Mike Griffin custom hot rod builder, a friend and also a member of the Sarasota Café Racers, C-notched the frame after the car was built to lower its rear ride height.

Nestled under the customized hood is a Chevy/GM LS II small-block, pirated from a ’06 Pontiac GTO along with its matching six-speed manual transmission. Boosting power is a high-performance Corvette camshaft and full-length headers. Detailed like a show car, the engine compartment brings back memories of a period Black Widow Chevy powered by a fuel-injected small-block. That’s a ’57 Chevy passenger car fuel injection air cleaner assembly, flipped 180 degrees and ducted to stock vents over the headlights. That insures a supply of fresh air at ambient temperatures at the FI throttle body. 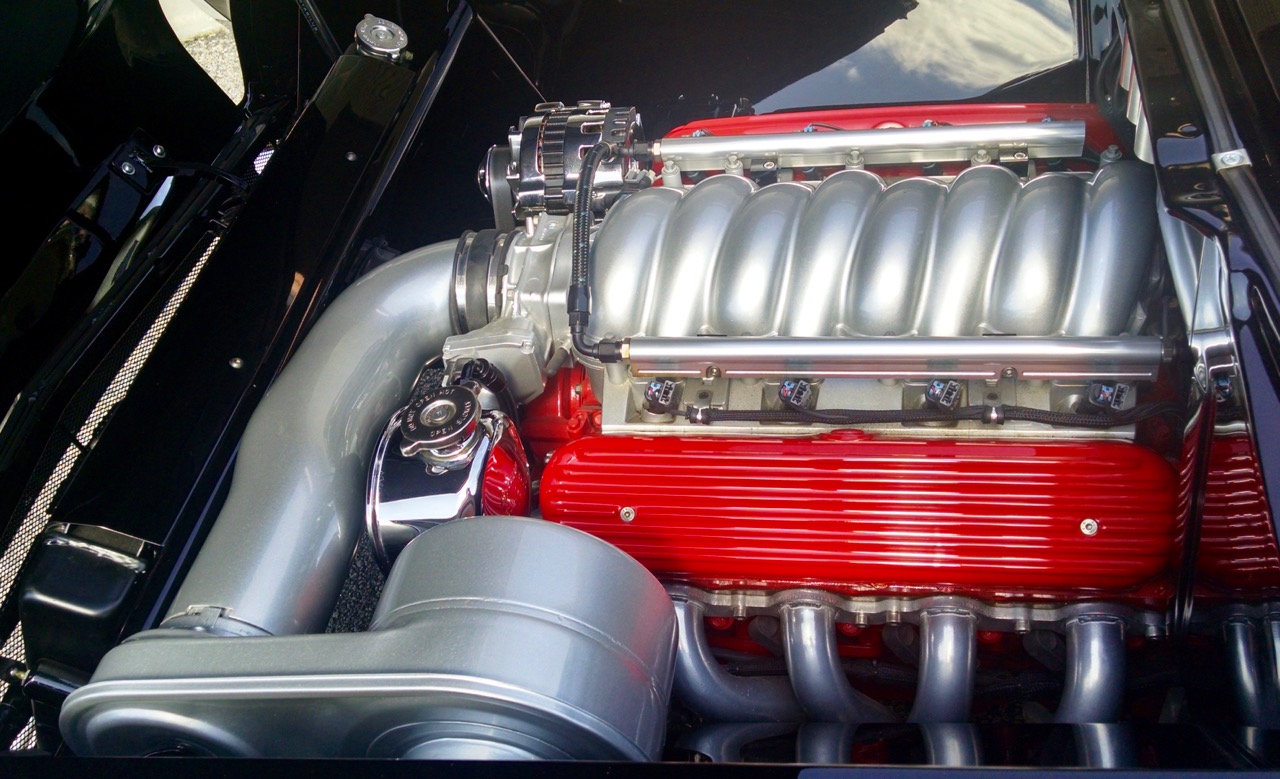 Customizing and hot-rodding a ’57 Chevy can net you one really cool ride. Resto-modding one the way Ronnie Staples did raises the bar to new heights. In addition to turning heads or smoking the tires, this 53-year-old ‘57 CHEVY: BLACK WIDOW REDUX runs, drives and rides like a new car. It’s fast; handles and stops like a well-tuned sports car. It’s a worthy addition to Ronnie’s collection of old school hot rods, customs and resto-mods, all licensed, insured and ready for the road!