The start to our vintage racing coverage schedule this year was, as in the past, the Wild Hare Run put on by VDCA (Vintage Drivers Club of America) at VIR (Virginia International Raceway) in Alton, VA. Our Mike Matune was trackside at VIR. 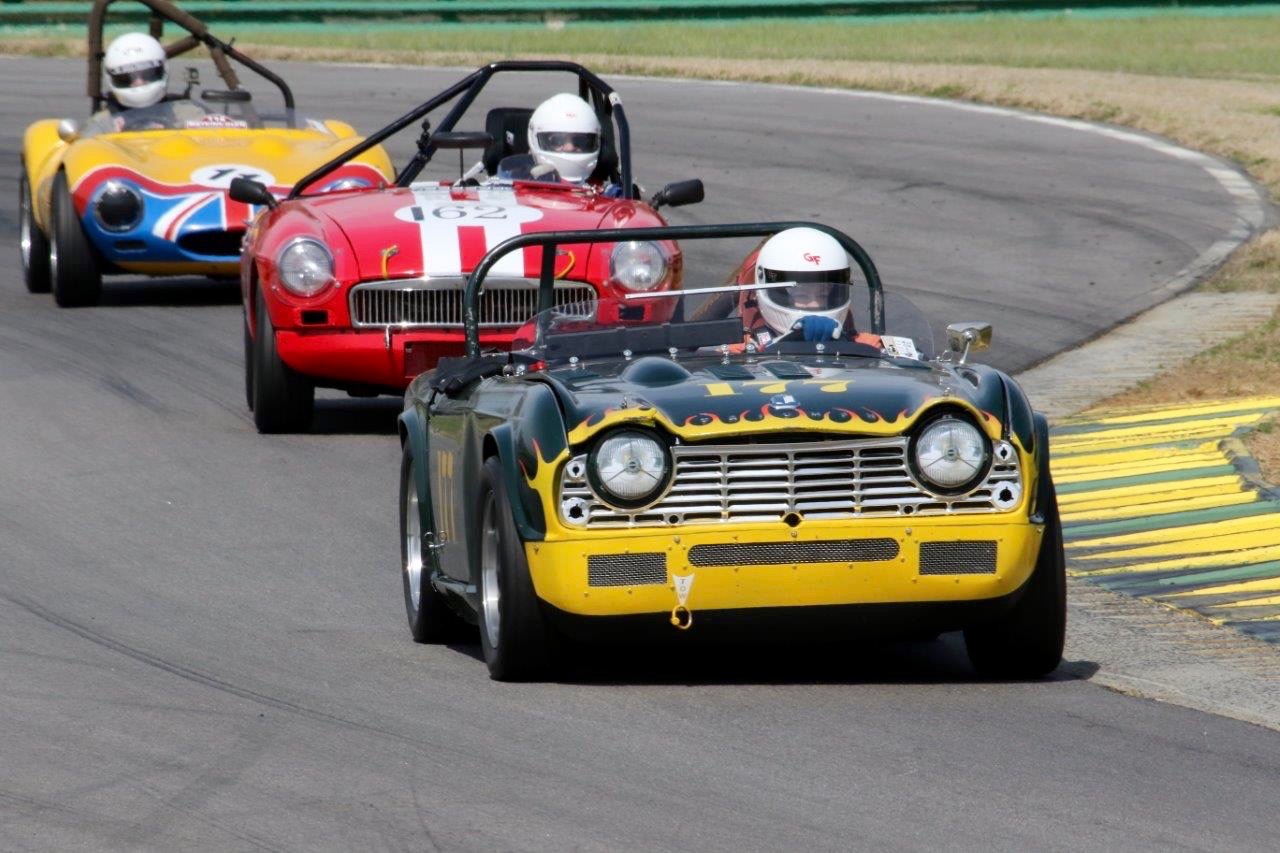 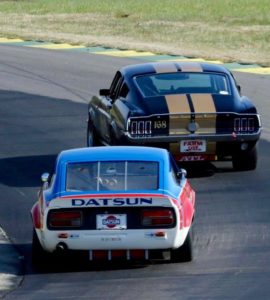 Vintage racing can be as competitive as any other type of competition as showcased here by this tightly spaced group attacking the “Snake”. Leading the pack is Dean Tetterton (Triumph TR4) followed closely by John Fontanella (MGB) and Hervey Parke (Ginetta G4). 3199

Lee Buckner accelerates away from the bottom of the Roller Coaster in his Mustang, right, dogged by George Wright in his Datsun 240Z. The Wild Hare Run was marked by a huge weather change in the middle of the weekend. Friday was one of those sunny, warm days that gave hope that this endless winter may in fact be ending. 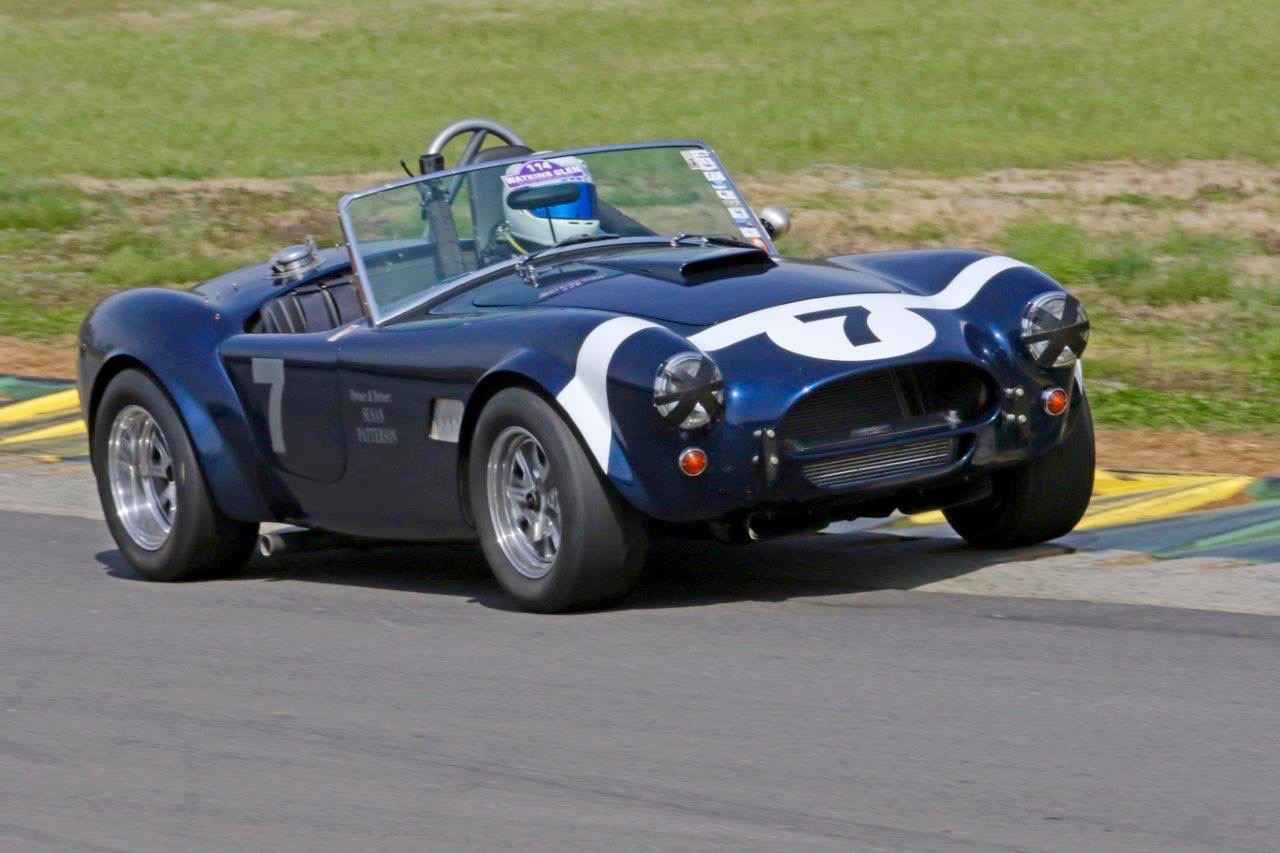 Susan Patterson won the Wild Hare Run in her Cobra. Her car is a faithful reproduction of an early Cobra right down to its traverse leaf spring front suspension and 260-inch Ford small-block. The Wild Hare Run is a fun event held annually and all cars racing at VIR that weekend are eligible to enter. They are handicapped and started in order from slowest to fastest. The concept is for the faster cars to catch and pass the slower ones. In a perfect world all would finish simultaneously. Alas, the world isn’t perfect and in its history, there has never been a photo finish at the Wild Hare. 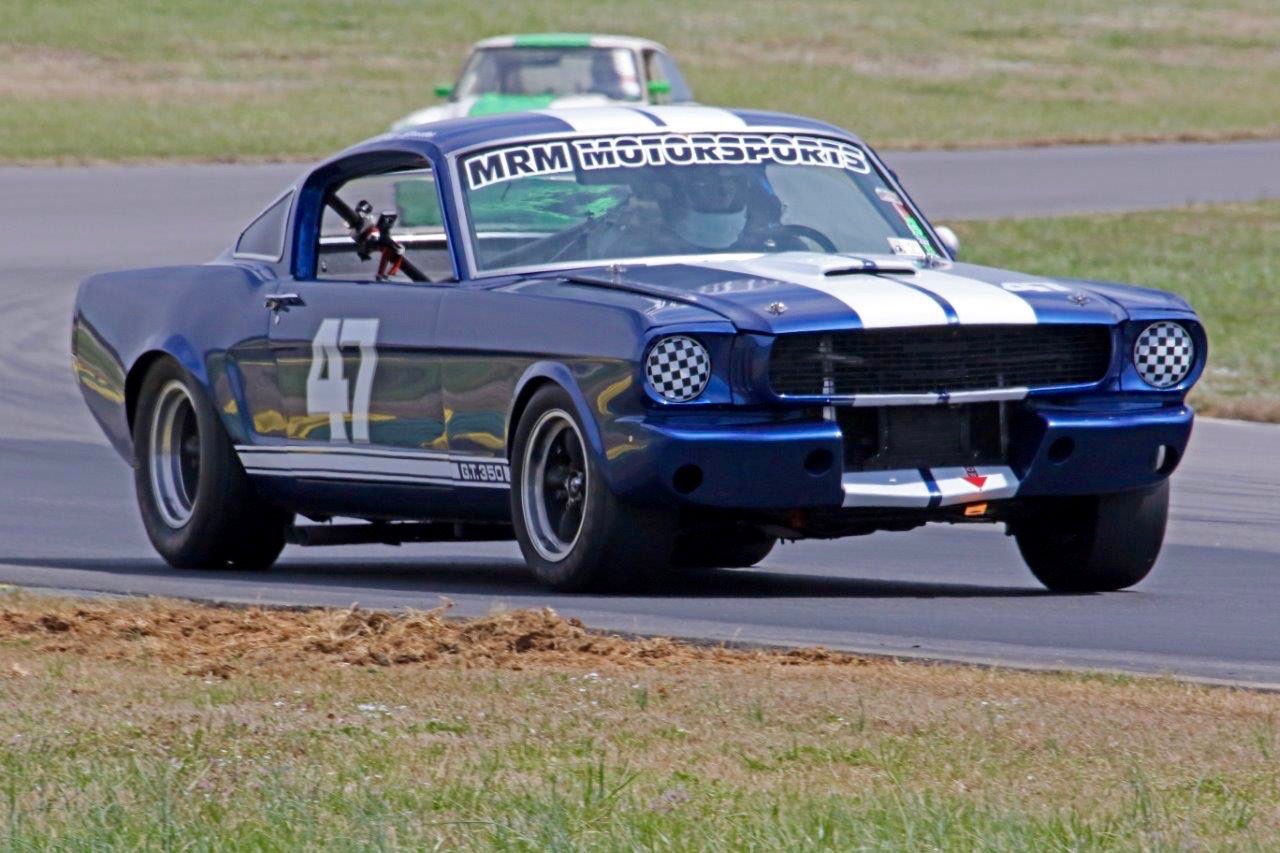 Greg Sproles’ GT350 clone began its competitive life as a derelict pulled from a riverbank. Once all the snakes that considered it home were scared off, the work of converting it to a racecar began! For the most part it has been prepared to period GT350 specs. After its debut in the 1980s, it has competed in the Carrera Panamericana (Mexican) road race on multiple occasions and at a host of vintage racing events. 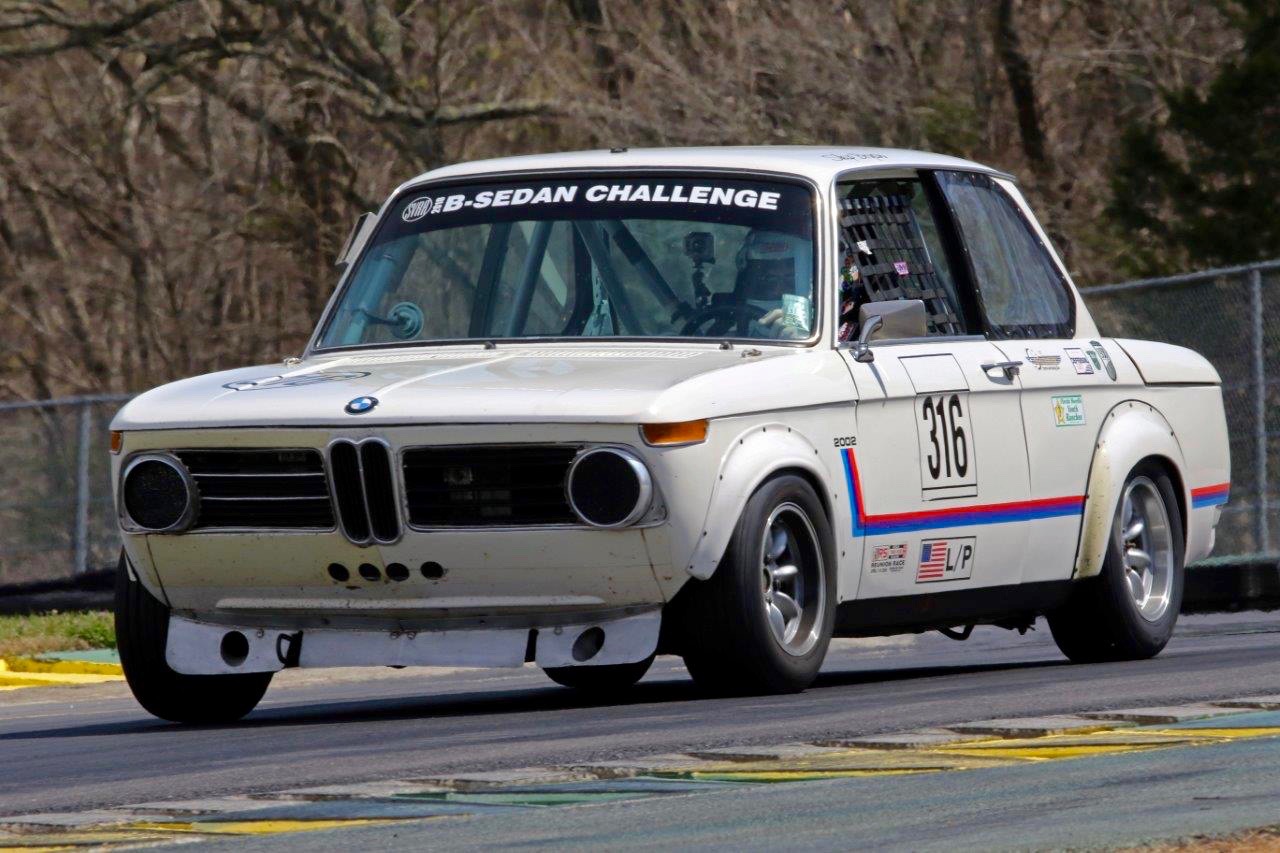 The windshield header on Skip Bryan’s BMW 2002 heralds the beginning of a group new to vintage racing, the B-Sedan Challenge. It is designed to encourage participation by cars that raced in the original SCCA B Sedan & 2.5 Trans Am Challenge as well as similar IMSA classes. The group had their inaugural race at Sebring and appear on their way to establishing themselves as players on the vintage racing scene. 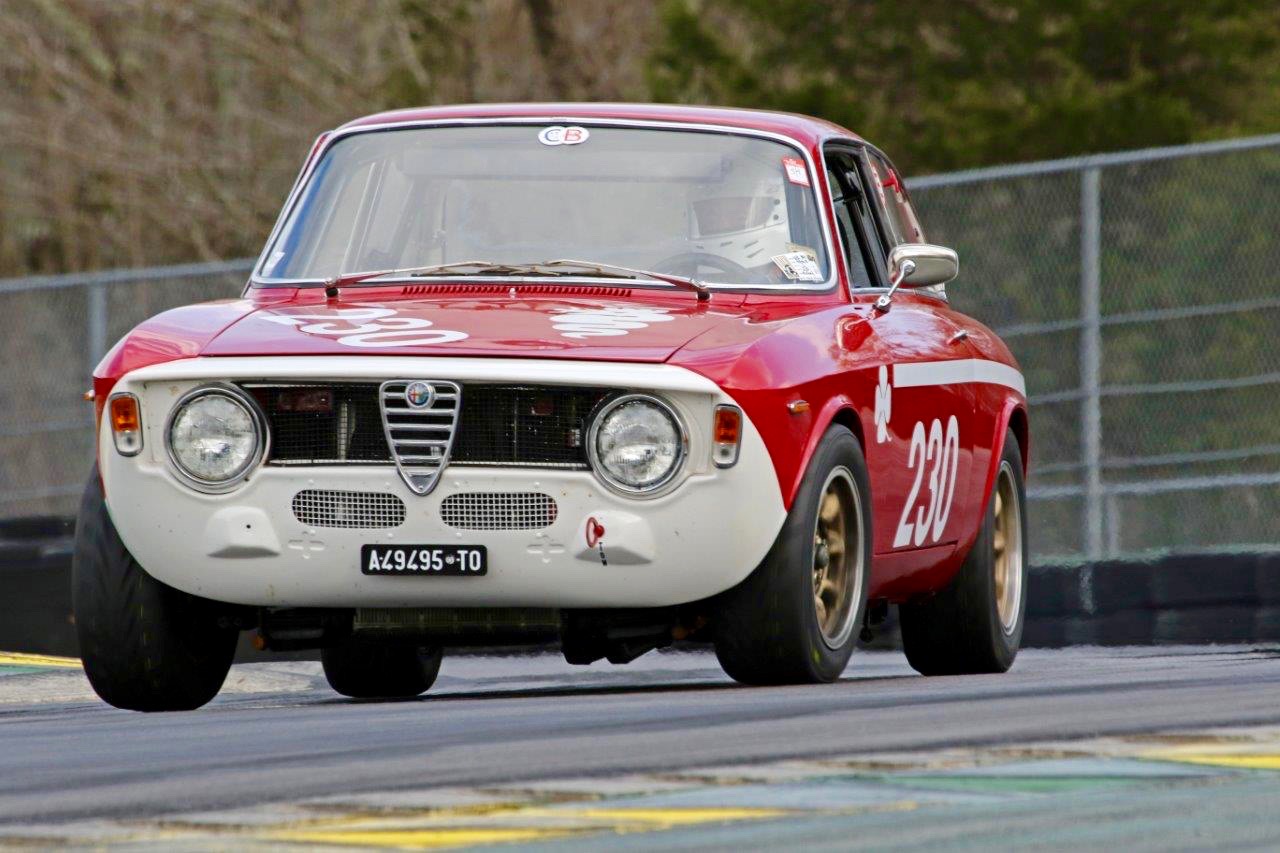 Alfas are certainly no strangers to vintage racing and we’ve covered numerous examples in past posts. At VIR, a couple of notable Alfas showed up including Russ Jones’ Alfa Romeo GTA. Part of a very limited production run, this one has the smaller 1,300-cc engine. GTAs were produced in displacements up to two liters. One of the things that make them unique is weight saving aluminum body panels and thinner gauge steel inner panels. Jones reports that Autodelta, Alfa’s competition arm, raced the car before he imported it.

Another rare Alfa was Sharon Adelman’s ‘60 Sprint Zagato “Coda Tonda” or “Round Tail”. One of approximately two hundred built, the car was once identified as “some kinda’ Miata” by a young enthusiast. Forgiveness should probably be granted, as you aren’t likely to see this shape often. Power comes from a 1,300-cc engine hooked to a five-speed transmission, all wrapped in a stunning aluminum skin. This one was raced in its homeland before coming stateside where it has competed in vintage events such as Monterey and the Pittsburgh Vintage Grand Prix. Adelman is to be congratulated on using the car as it was intended, on a racetrack. 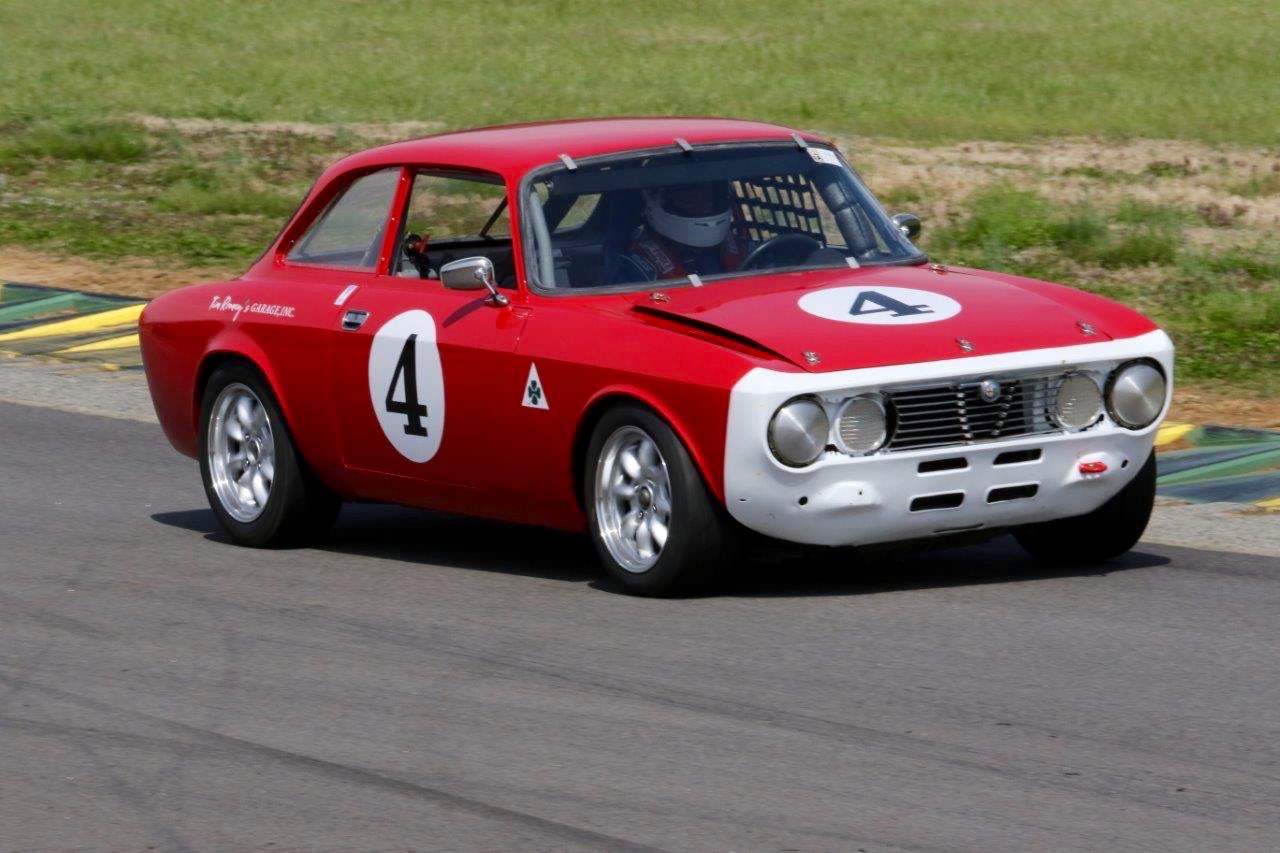 Before we leave the Alfa contingent, thought we might share with you the story behind the four-leaf clover emblem so prominently displayed on the side of Alfas. The clover, or quadrifoglio in Italian, set in a triangle traces its roots back to 1923, when Alfa racer Ugo Sivocci painted the good luck symbol set in a diamond on the side of his Alfa racecar in an attempt to break a string of second-place finishes. It worked. He won the Targa Florio that year. His luck wouldn’t hold, and he lost his life in a subsequent racing accident. The emblem was revised to a triangle, symbolizing the loss of his life and the badge became de rigueur on Alfas. Here it is displayed on Shawn Bullard’s Alfa GTV. 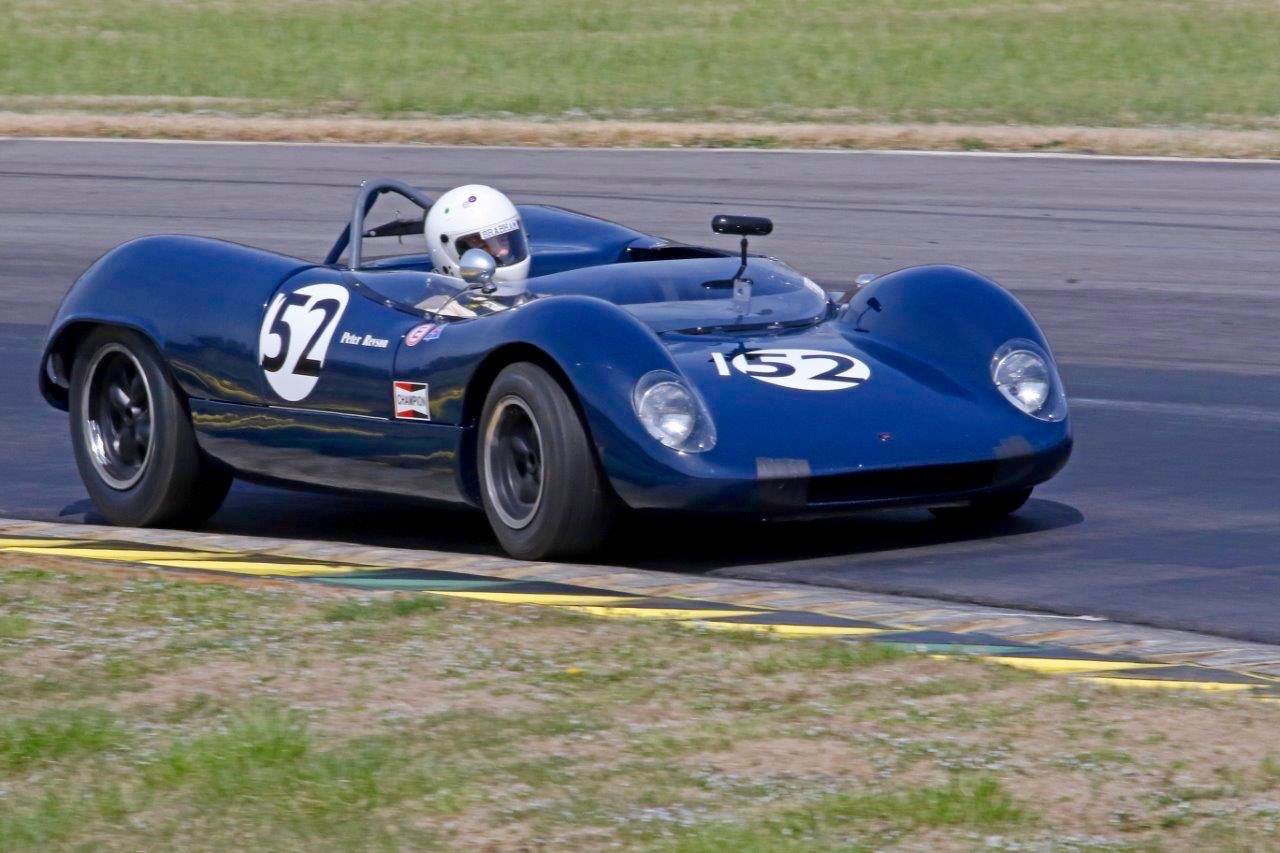 We could spend eons of time telling the full, detailed story of Dan Chapman’s Brabham BT8, but we only have time for some highlights. It starts with Peter Revson who campaigned the car in Europe, Canada and Nassau, before passing it to Skip Barber. He raced it with success in SCCA events and held the track record at VIR on two occasions. It followed the path a lot of cars do as it passed through the hands of different owners and sported various powerplants before its revival to period standards for vintage racing. Now fitted with a Coventry Climax 2.5-liter DOHC FPF, the car has proven its competitive worth on both sides of the Atlantic. Chapman recently acquired the car and VIR was his first outing with it. Last we saw him, he was smiling broadly! 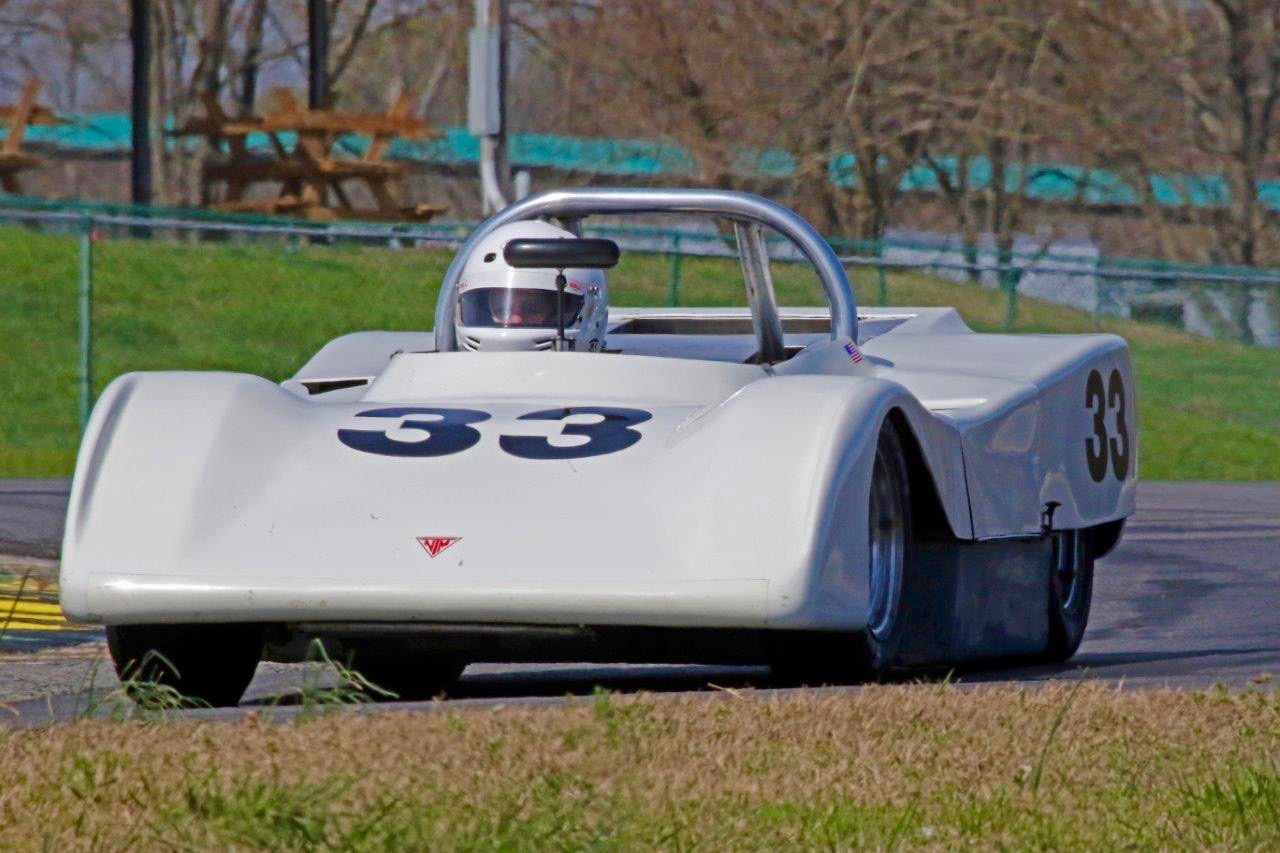 Let’s face it when the little cars come out, some of us go on break. But we do ourselves a disservice by missing some true innovation and creativity. Take Doug White’s NTM Mk III H-Modified racer. It looks like a shrunken Can-Am car, but under the skin it sports a full fiberglass monocoque and scores of bespoke suspension pieces. Total weight is in the vicinity of 850 pounds. Power comes from a Honda S800 four-cylinder engine that appears to be based, at least in part, on Honda motorcycle technology. White’s version is fairly stock making about 85 horsepower; a full race version would pump out closer to 125 horsepower. 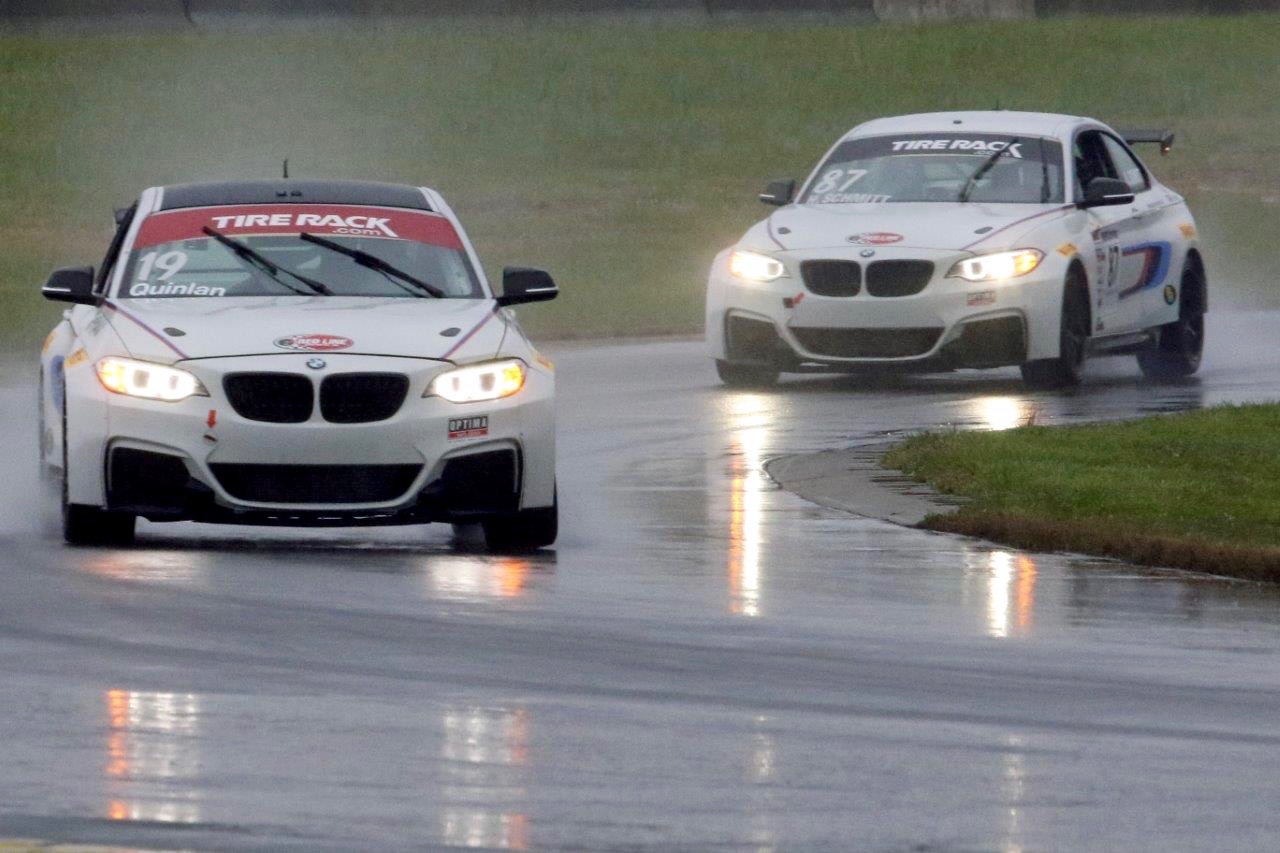 Saturday proved that winter had not quite completely loosened its grip. The day dawned cold, rainy and windy. Intrepid racers like Sean Quinlan and Gregory Liefooghe braved the element, splashing through the puddling rain, their lights ablaze fighting the doom and gloom. The duo was part of an avid group of BMW racers who took part in a BMWCCA race held in conjunction with VDCA’s event.

Special thanks to David Baltazar of VIR for his help with credentials.