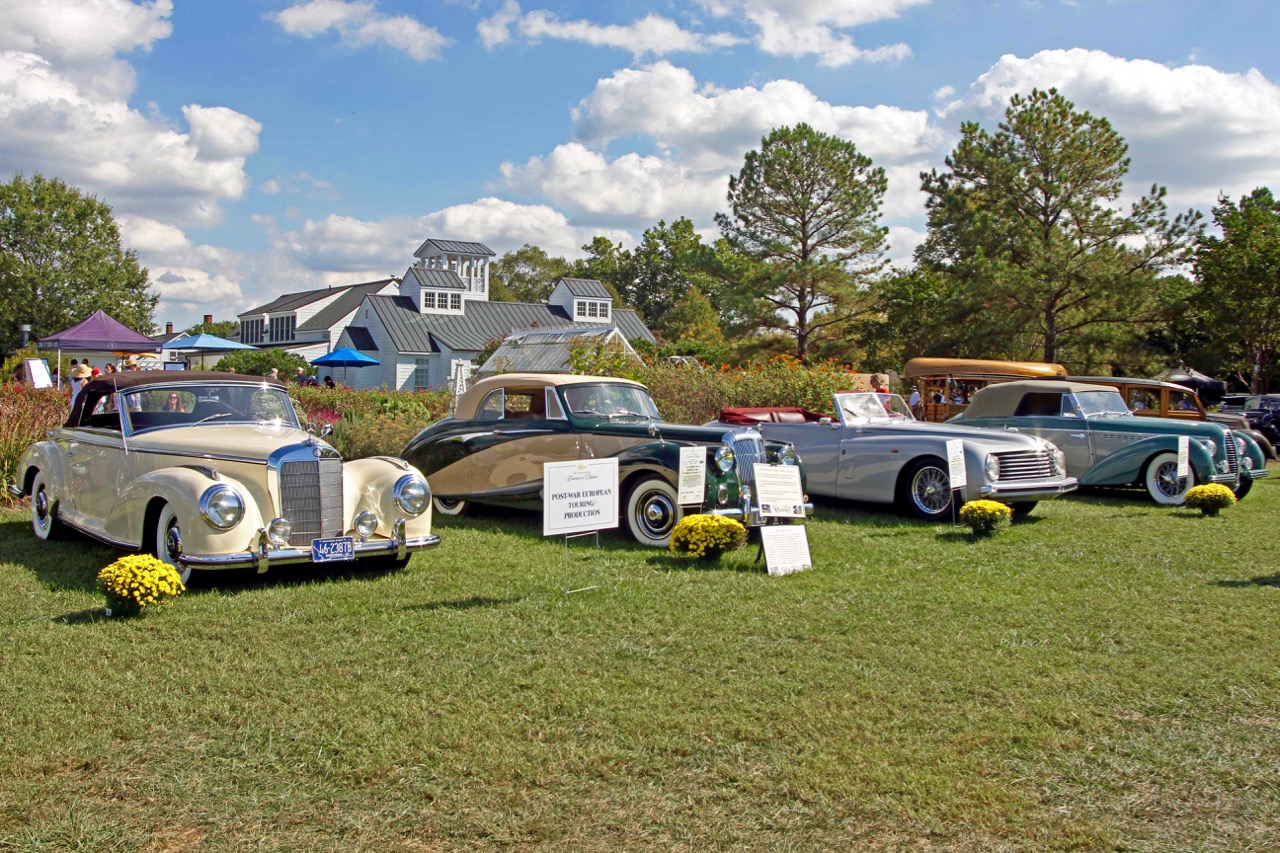 This year was lucky number 13 for the St. Michaels Concours d’Elegance. Situated on the grounds of the Inn at Perry Cabin and the Chesapeake Bay Maritime Museum, it showcased the beauty and grace of classic cars and boats set among the splendor of Maryland’s Eastern Shore on a late summer Sunday afternoon. New this year was a gathering of the Senior Award winners along the waterfront for the presentation of the named awards. Owners of five top cars nervously waited to be called forward for individual honors at ST. MICHAELS: CONCOURS ON CHESAPEAKE BAY! 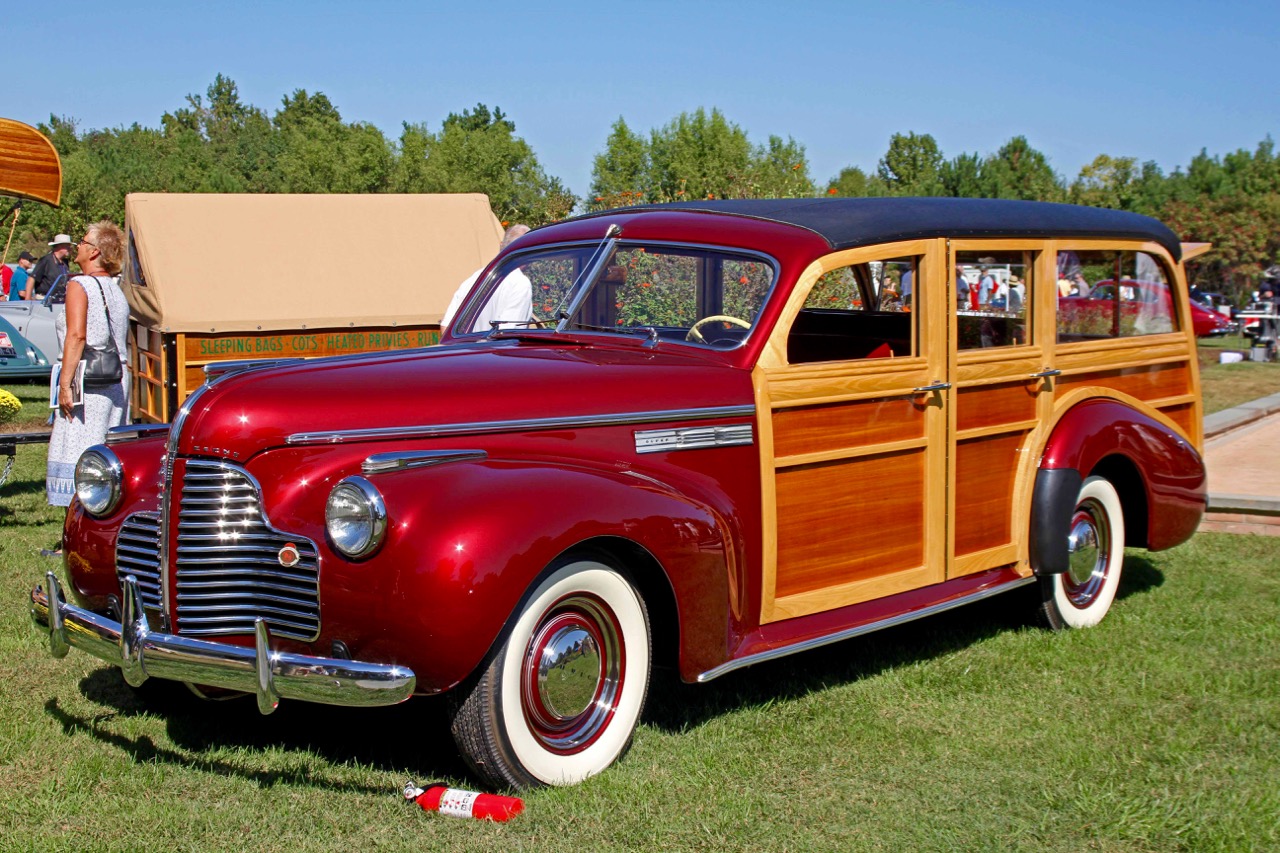 The rumored backstory to Buick’s first production station wagon is almost as interesting as Steven Newby’s ‘40 Buick Super Estate four-door Woodie. Seems a Hollywood producer was entertaining Buick executives and mentioned he didn’t drive a Buick, because they didn’t make a wagon. That set the wheels in motion and this car resulted. Newby’s Buick was notable for its meticulous restoration and presence on the show field. 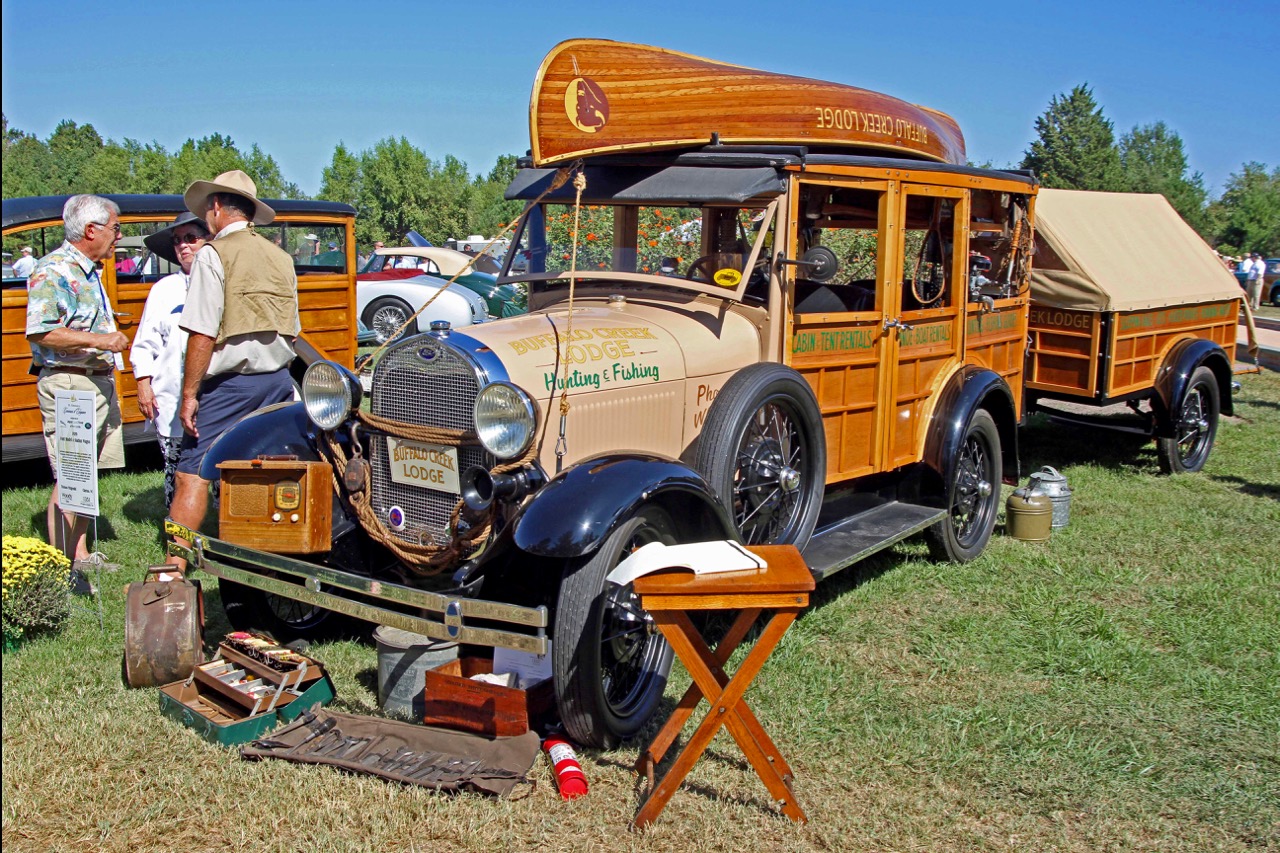 Maryland’s Eastern Shore has welcomed all manner of outdoor lovers for years. Thomas Fitzgerald brought that history to life with his ‘29 Ford Model A station wagon. Period accessories abound to take show goers back to a time when camping was camping, and air-conditioned RVs didn’t exist. Fitzgerald’s Model A so charmed those there, that he left with the People’s Choice Award. 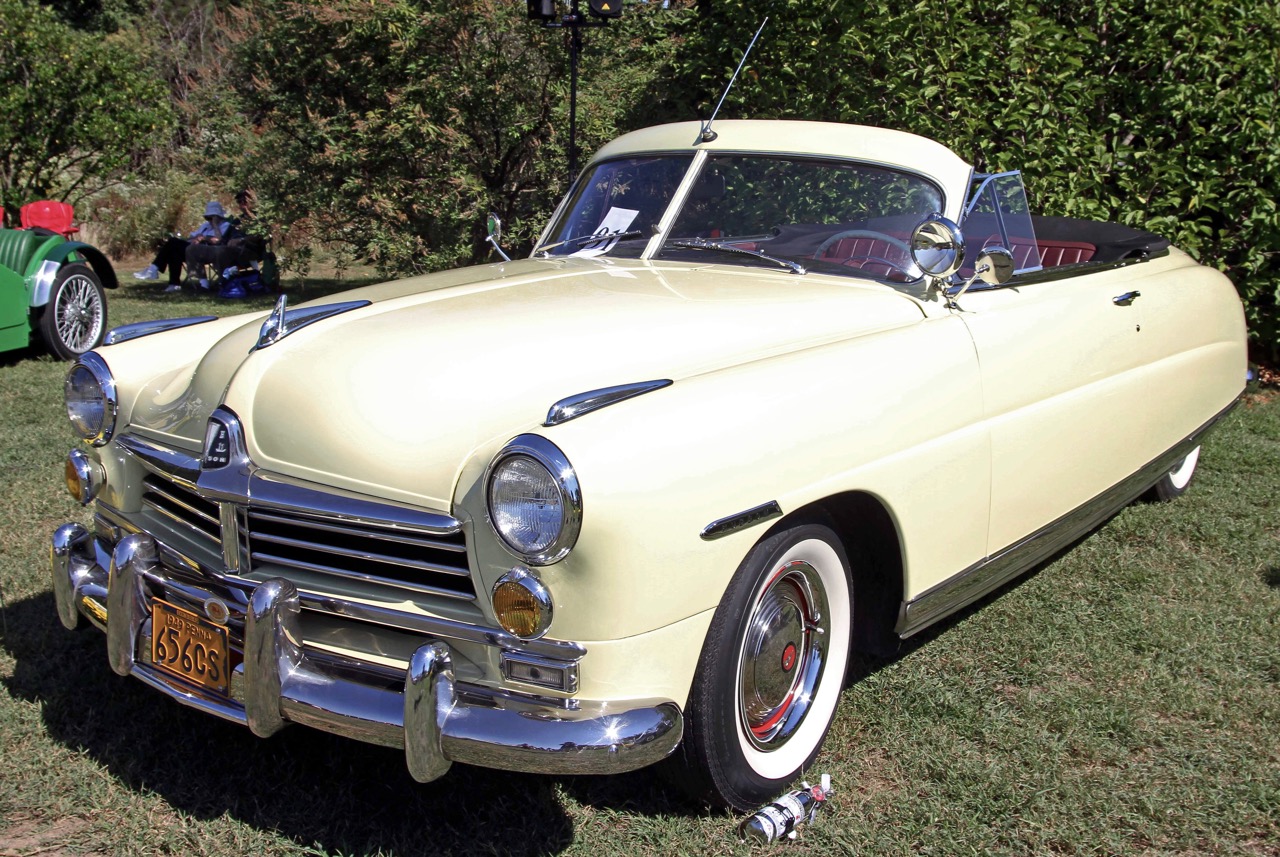 In the late 1940s, if you wanted a hot car, you bought a Hudson like Bob Broeze’s ‘48 Hudson Commodore Custom Convertible Brougham. Rather than using a body-on-frame design, Hudson’s “Step-Down” design relied on uni-body construction providing a lighter, lower car. Under hood, power came from Hudson’s potent Twin H engine, the scourge of the early NASCAR racing days. 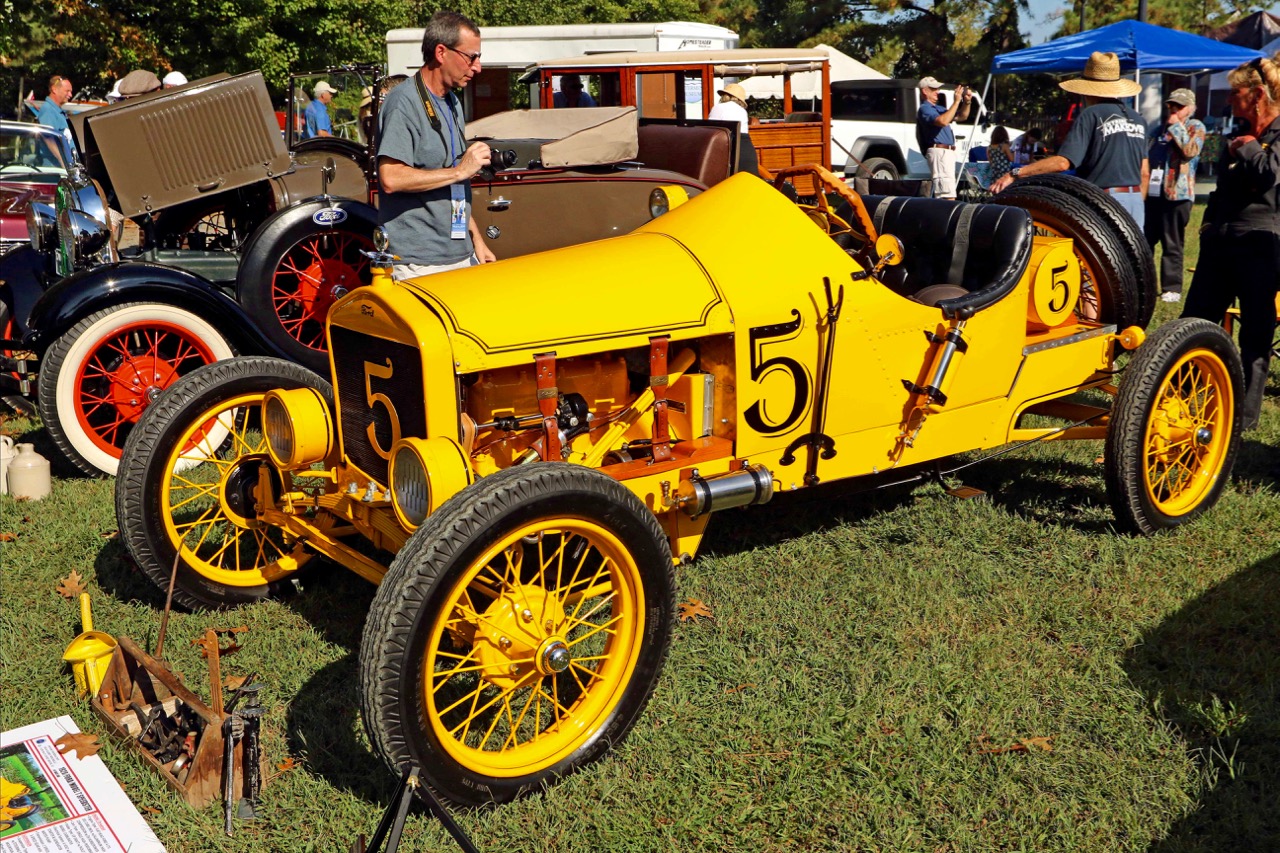 As with many early racecars, the exact history of Karen & Joe Minchelli’s ‘20 Model T Speedster is somewhat cloudy. The best information available says it was built by George Navarro sometime in the late 1920s and saw action in various west coast endurance races. It found its way east and was discovered languishing in Virginia before its restoration. Today it competes in events across the country. Top speed is a very white-knuckle 70 mph, aided by its hot-rodded 26 horsepower Flathead Four. 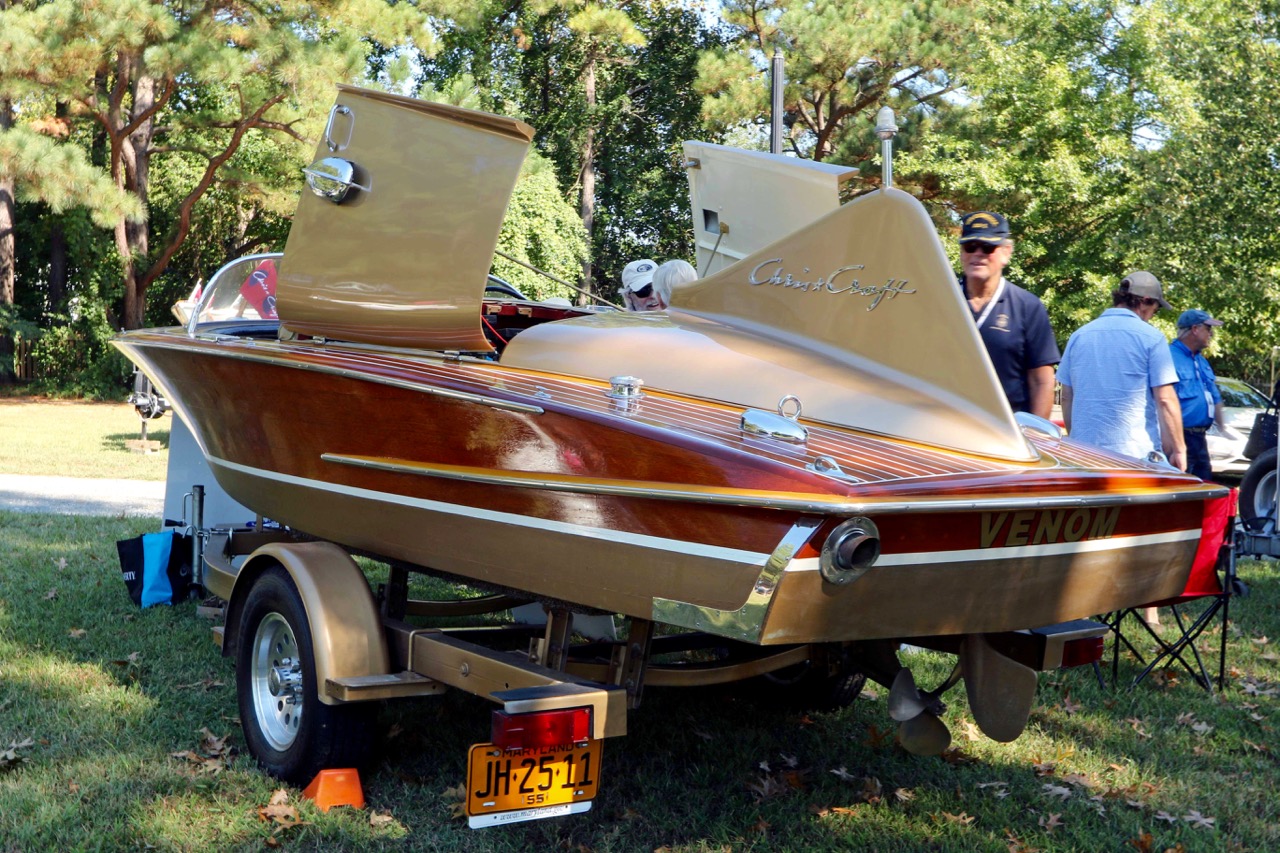 On the grounds of the Chesapeake Bay Maritime Museum, the St. Michaels Concours also showcases classic wooden speedboats. Taking home the honors this year was Bob Boardman’s ‘55 Chris Craft Cobra named Venom. Its 18-foot length includes several styling features derived from cars of the period, including its tail fin. Performance was brisk, pushed along by a 131 horsepower Flathead Six. 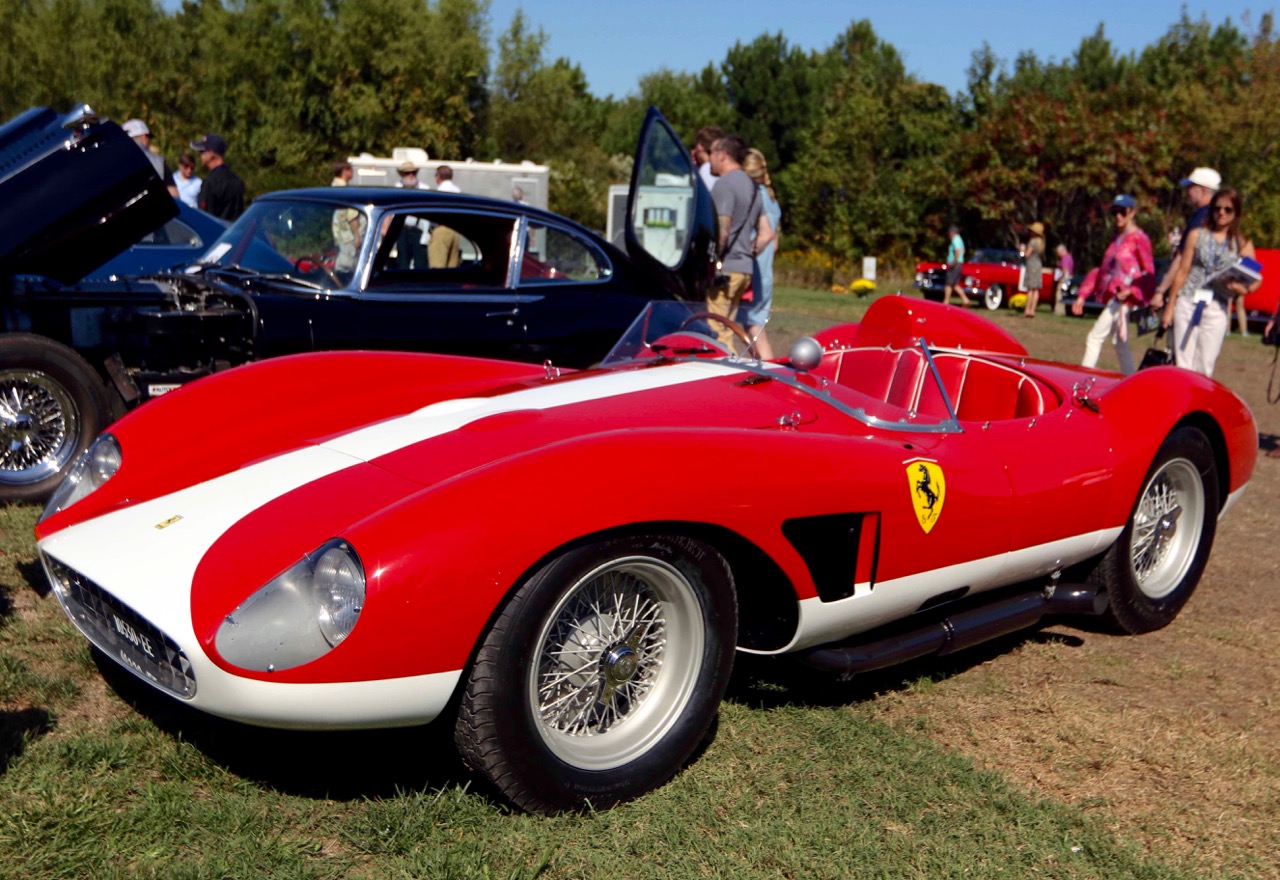 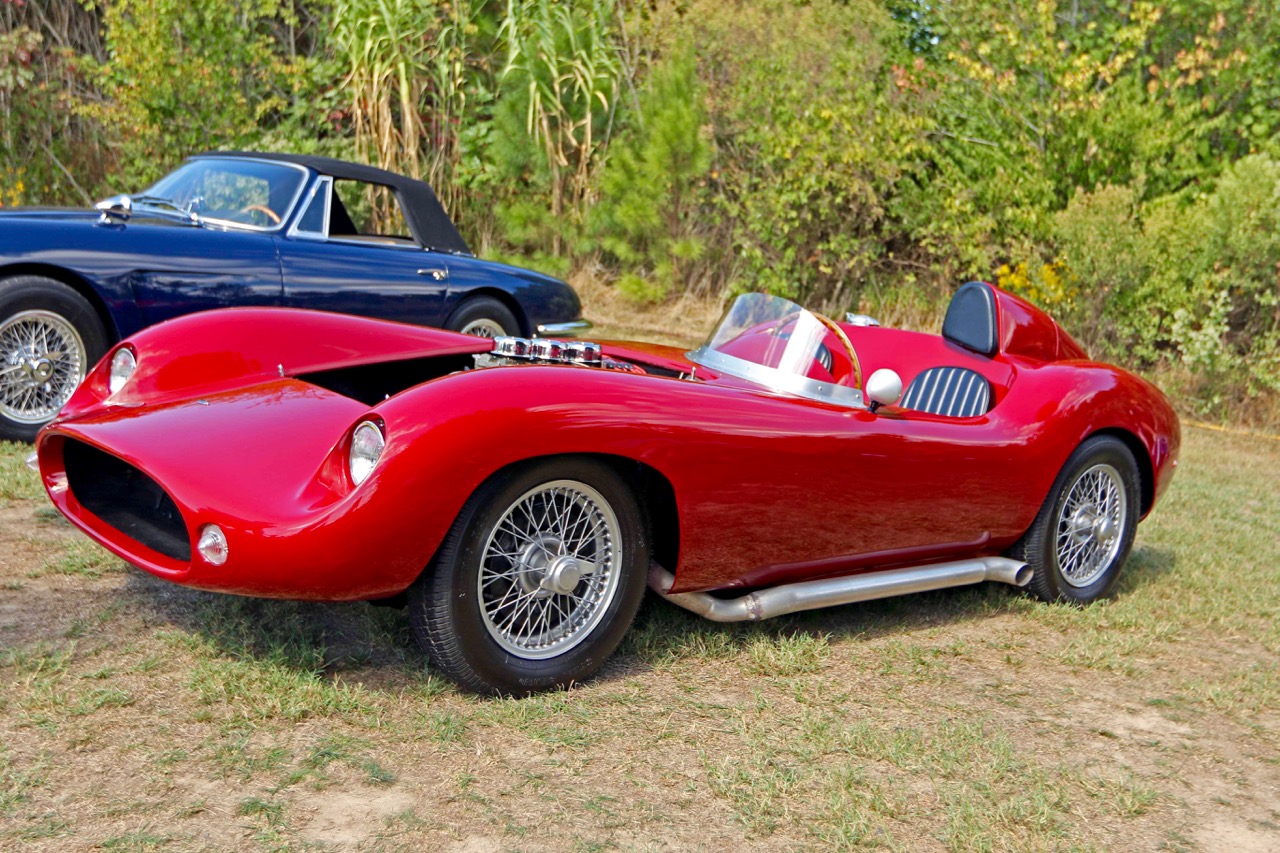 If a Ferrari wasn’t exactly within your racecar budget in the 1950s, you could simply build your own! Phil Fleming’s ‘58 Special combines a Devin body with an Austin-Healey chassis and Chevy power. Fleming restored the car, reporting it was originally constructed to a very high standard and featured a number of Devin specific optional accessories, including a tri-power intake manifold, valve covers, steering wheel and gauges. 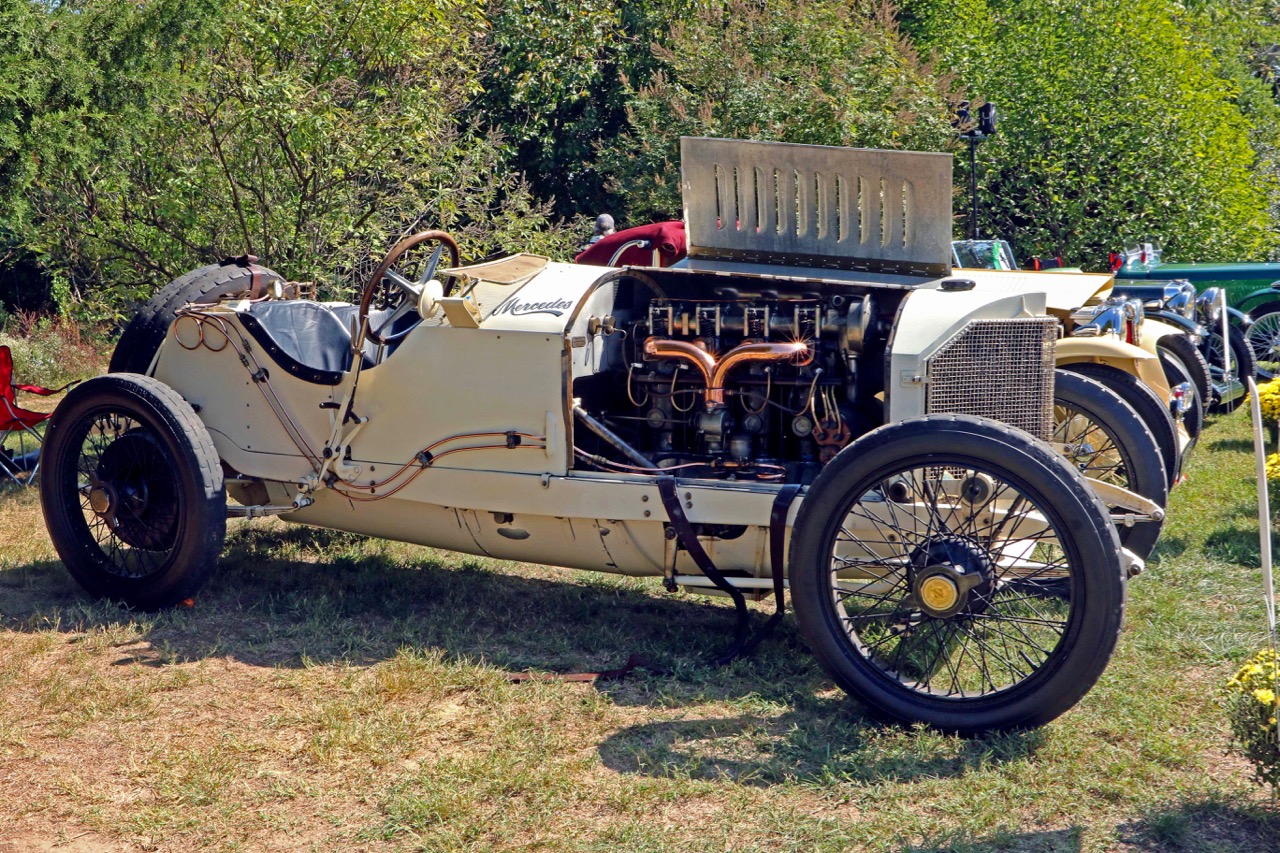 Here’s proof that the “put a big engine in a little car” performance formula isn’t new. Upfront in this 1912 Mercedes Racing Special is a 9.5-liter engine producing a death-defying (at the time) 100 horsepower. An unknown builder stuffed the Hall Scott airplane powerplant into a Mercedes chassis. Its earliest history is traced to Australia. Between that time and its restoration in England circa 2004, not much is known. Owner Halbert E. Fillinger, III has returned it to competition for vintage racing here and in Europe. 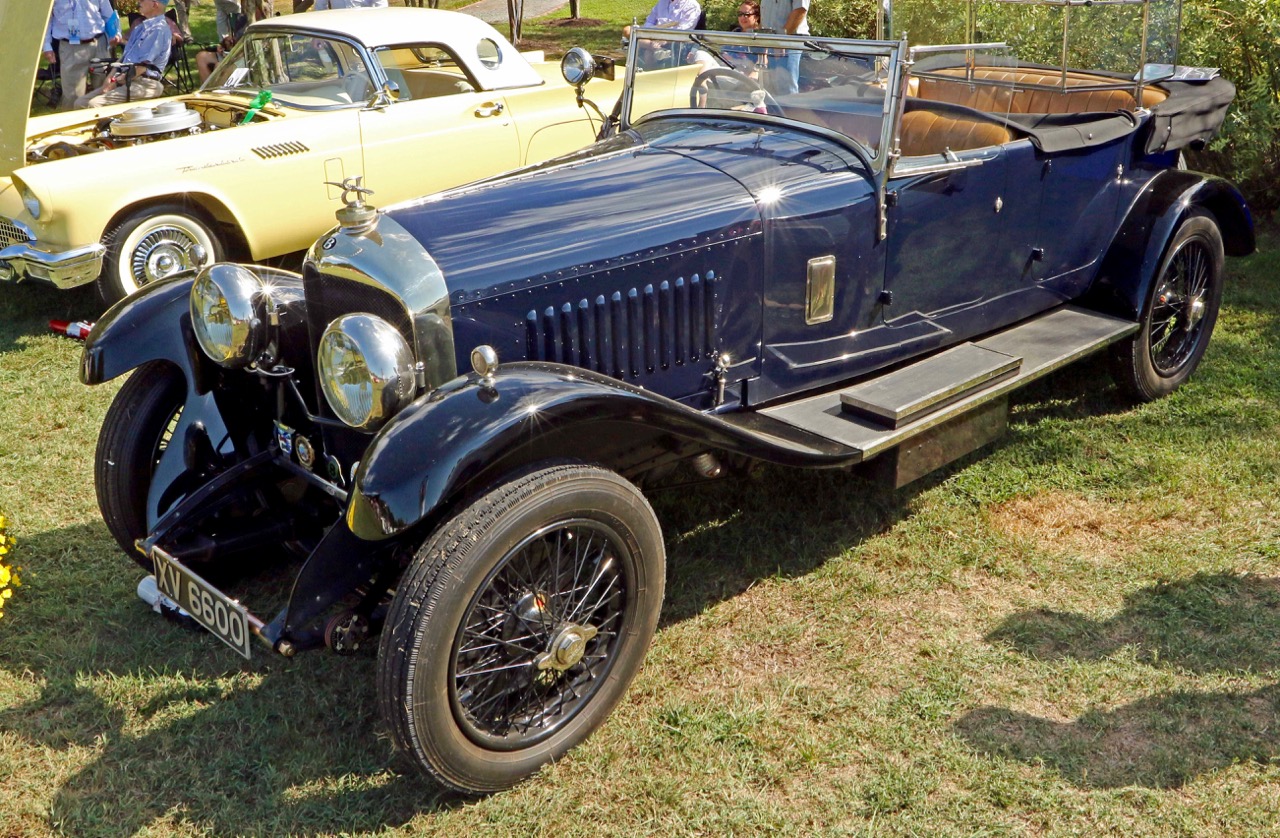 Thomas Heckman’s ‘29 Bentley 4.5-liter four-passenger Tourer with coachwork by R. Harrison & Sons is unusual for two reasons. First, it still possesses its original body, engine and powertrain. Some Bentleys of this era were lost to wartime scrap drives or are actually assemblages of several cars. Secondly, Heckman drives this car on numerous tours, adding about 2,500 miles per year. It certainly isn’t a “trailer queen”. 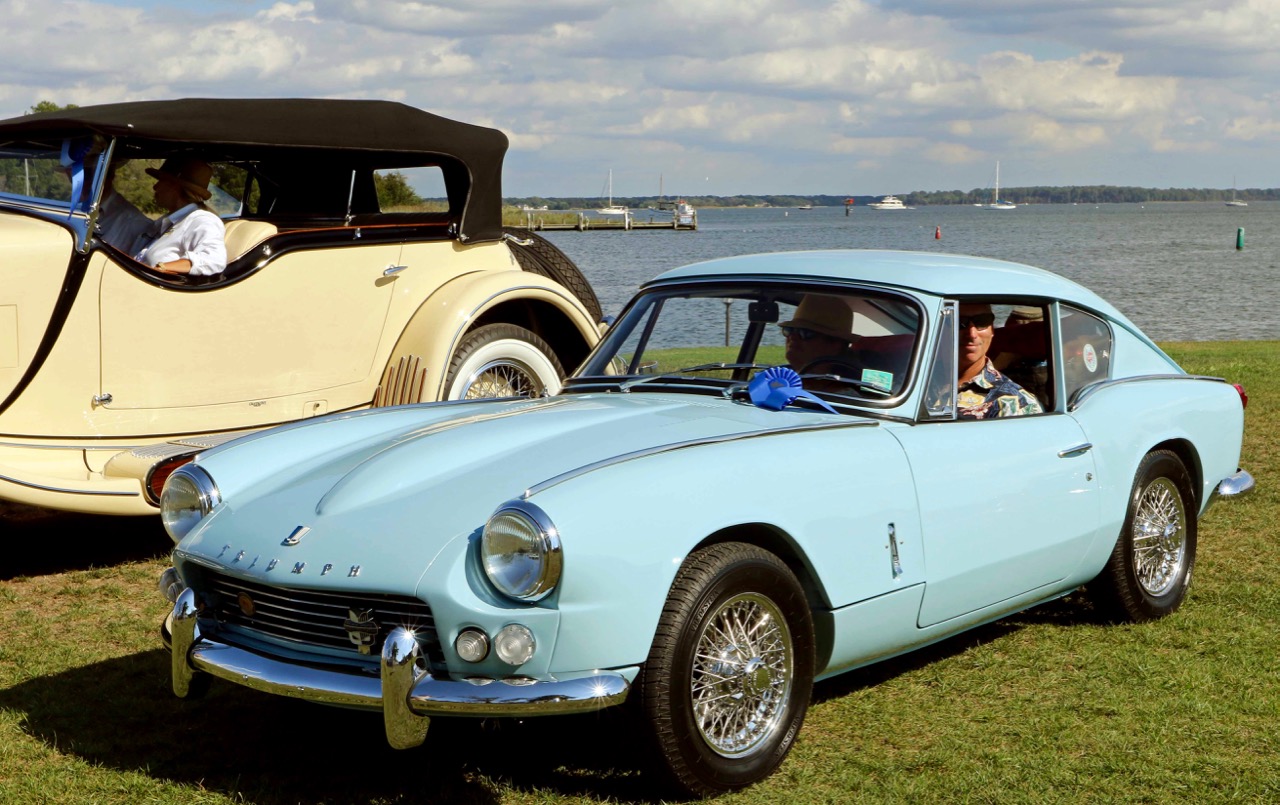 Among the awards presented at the ST. MICHAELS: CONCOURS ON CHESAPEAKE BAY! is one for best owner restoration. After a four-year process, Megan Lampinski took home this year’s award for her ‘68 Triumph GT6 Mk 1 coupe. Not only did Lampinski compete on the show field, she proved the Triumph’s mettle the day before on the Saturday Tour. Congratulations to her for her skill and perseverance. 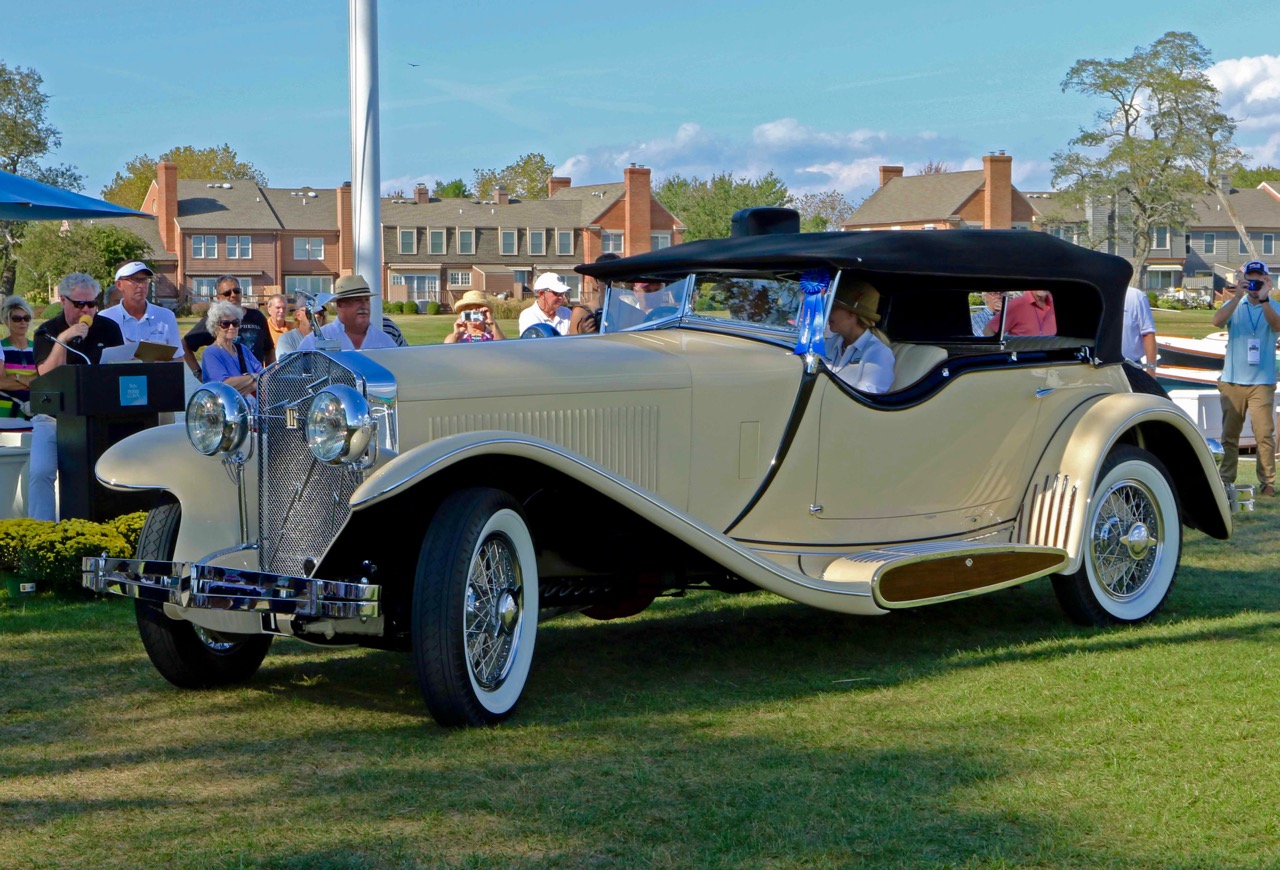 Stephen R. Plaster stops in front of the podium in his ‘33 Isotta Fraschini Tipo 8A Sports Tour with body by Castagna after being called up to receive Best in Show honors. It imparts feelings of luxury, performance and flamboyance all at the same time. Its history includes an appearance at the Paris Auto Show, ownership by radio personality Joe Penner and a movie part in the film Giant. 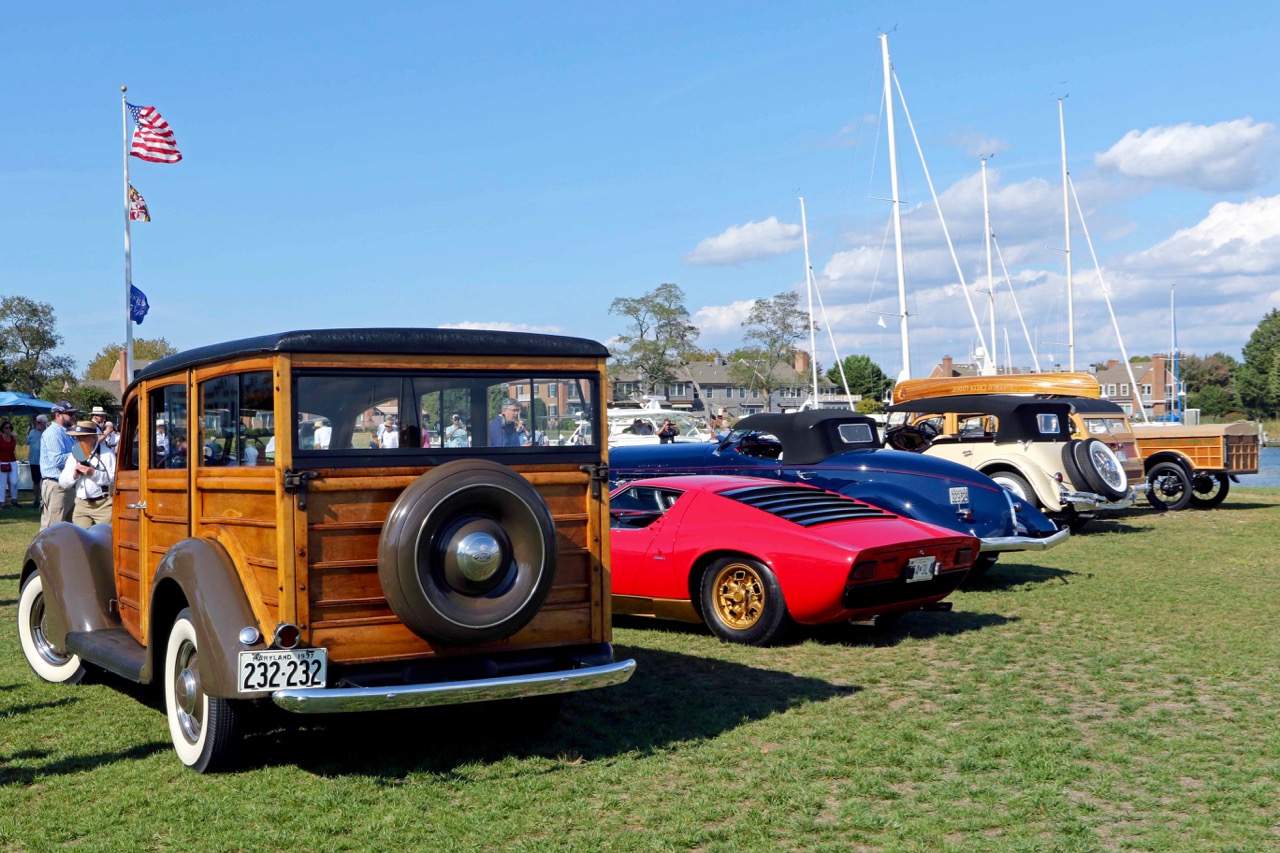 Our thanks to Concours’ Chairman Luke Phipps, Founder George Walish and Chief Judge Dave Olimpi for their help in covering this year’s Concours. Next year’s event is scheduled for September 27, 2020. Make plans to not only attend the Concours, but to also take in all the charming town of St. Michaels has to offer.

For more information about ST. MICHAELS: CONCOURS ON CHESAPEAKE BAY!, details about the 14th annual event next year and non-automotive family-oriented things to do in the area, please visit: http://www.stmichaelsmd.org/