Historic racecars come out of the woodwork worldwide once a year to challenge each other and the legendary Corkscrew at Rolex Motorsports Reunion: Laguna Seca. It’s the most important vintage-racing event in the US. Mike and Maureen Matune captured highlights for us. 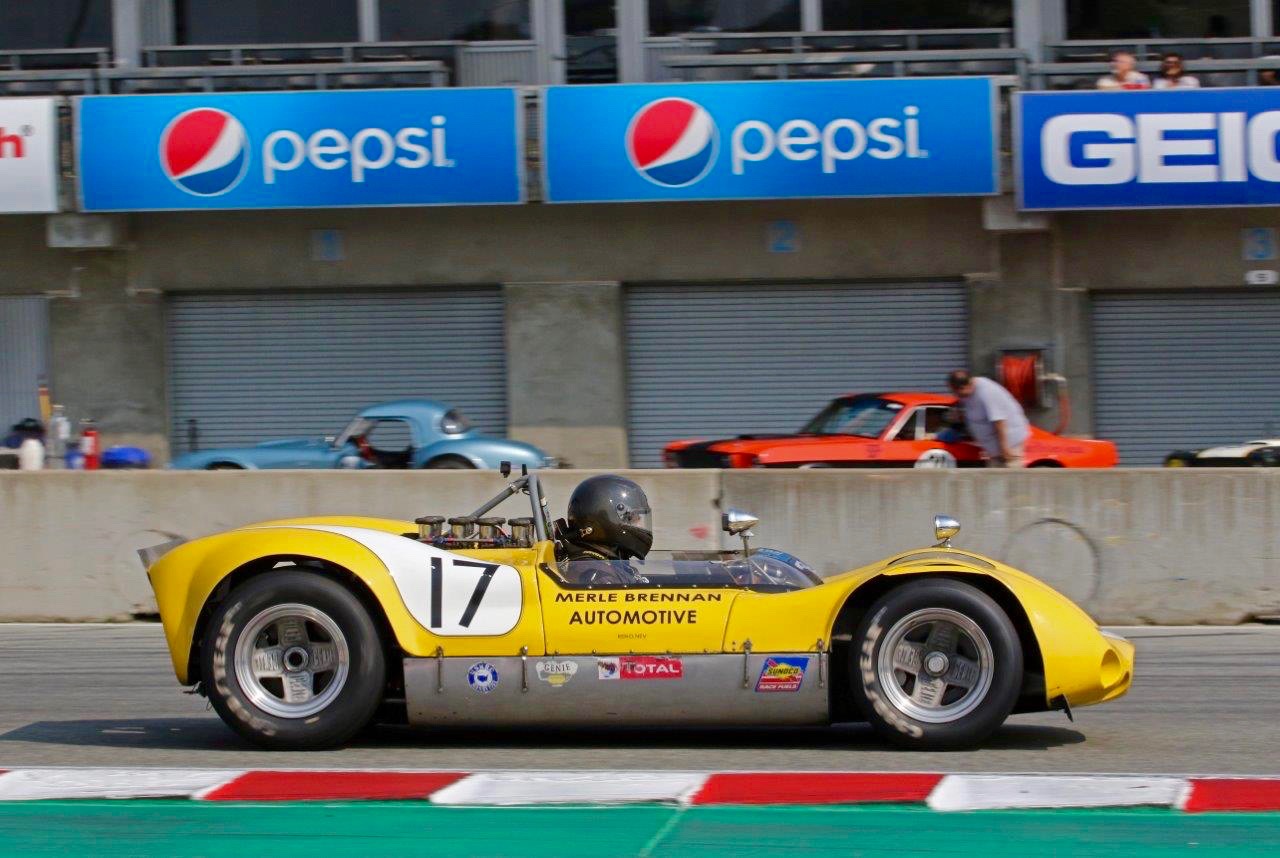 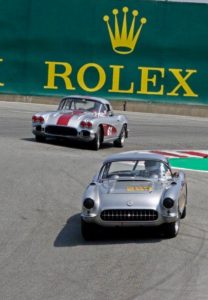 If it’s August, it must be time for the 2018 Rolex Monterey Motorsports Reunion at WeatherTech Raceway Laguna Seca! An annual pilgrimage for many of the automotive faithful, the event serves as one bookend for the extravaganza known as Monterey Car Week. Over four days, they cram a seemingly unending array of vintage races tracing motorsports history from brass-era cars through to the aerodynamic advancements of more recent years.

Joe Huffaker’s shop took a shot at building a Can-Am racer in the form of the Genie Mk10B, Top. AC D’Augustine’s example was the works’ entry driven by Bob Bondurant. Later the car was raced by Merle Brennan in both the USRRC and Can-Am. It is in Brennan’s livery that the car appeared at Monterey. It enjoyed limited success as progress in the class bounded forward at an ever-increasing clip, leaving it behind. Still a great looking car though. Together the Corvettes of Ron Erickson and Carlos Martinez de Campos, Right, plunge down into the legendary Corkscrew. 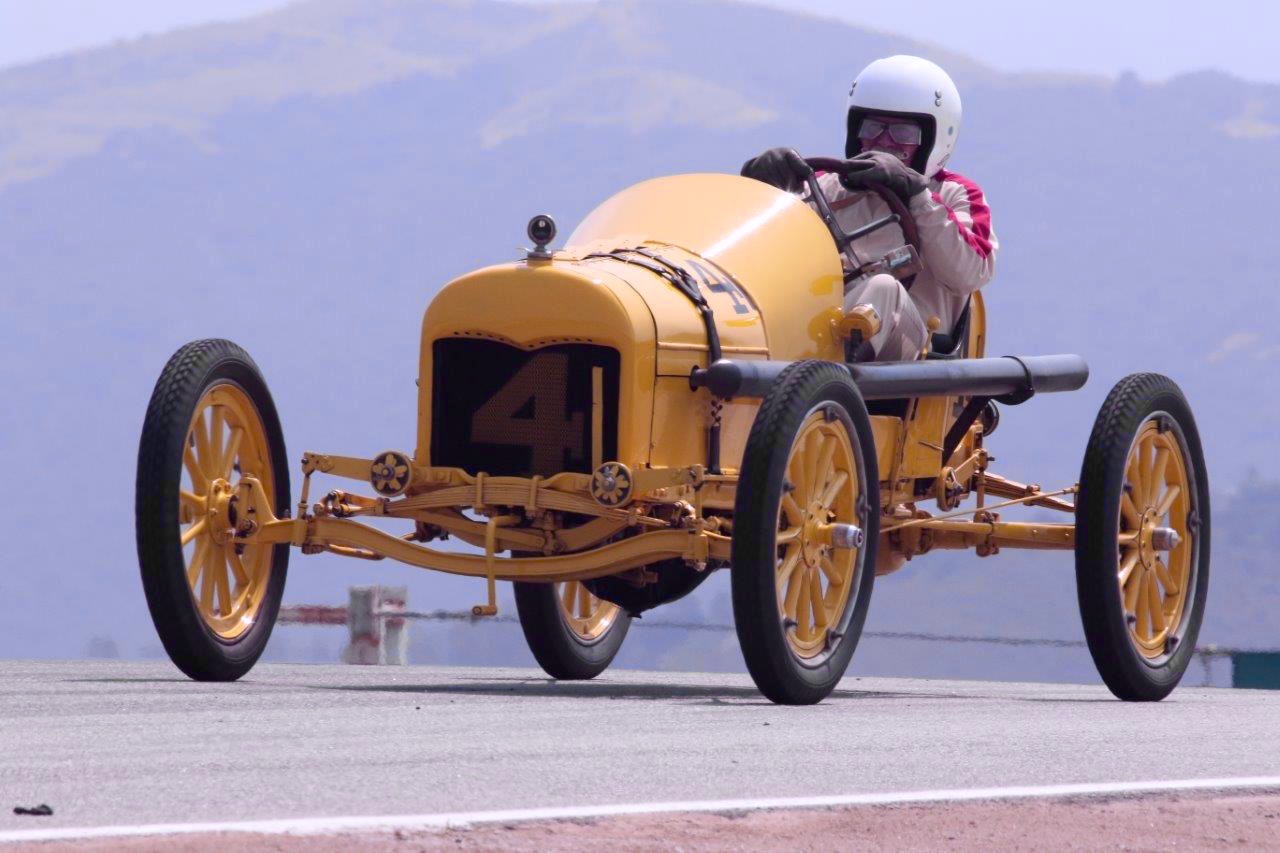 Perennial Pre-War competitor Ed Archer and his ‘15 Ford Model T Racecar have graced the stage at Monterey every year almost from its inception. Here the intrepid duo climbs the Rahal Straight to Laguna Seca’s highest elevation. The car was raced in-period in Southern California. Following restoration and upgrades, it began its “modern” racing career in 1967, almost enough time to qualify as a second “in period” time-frame. 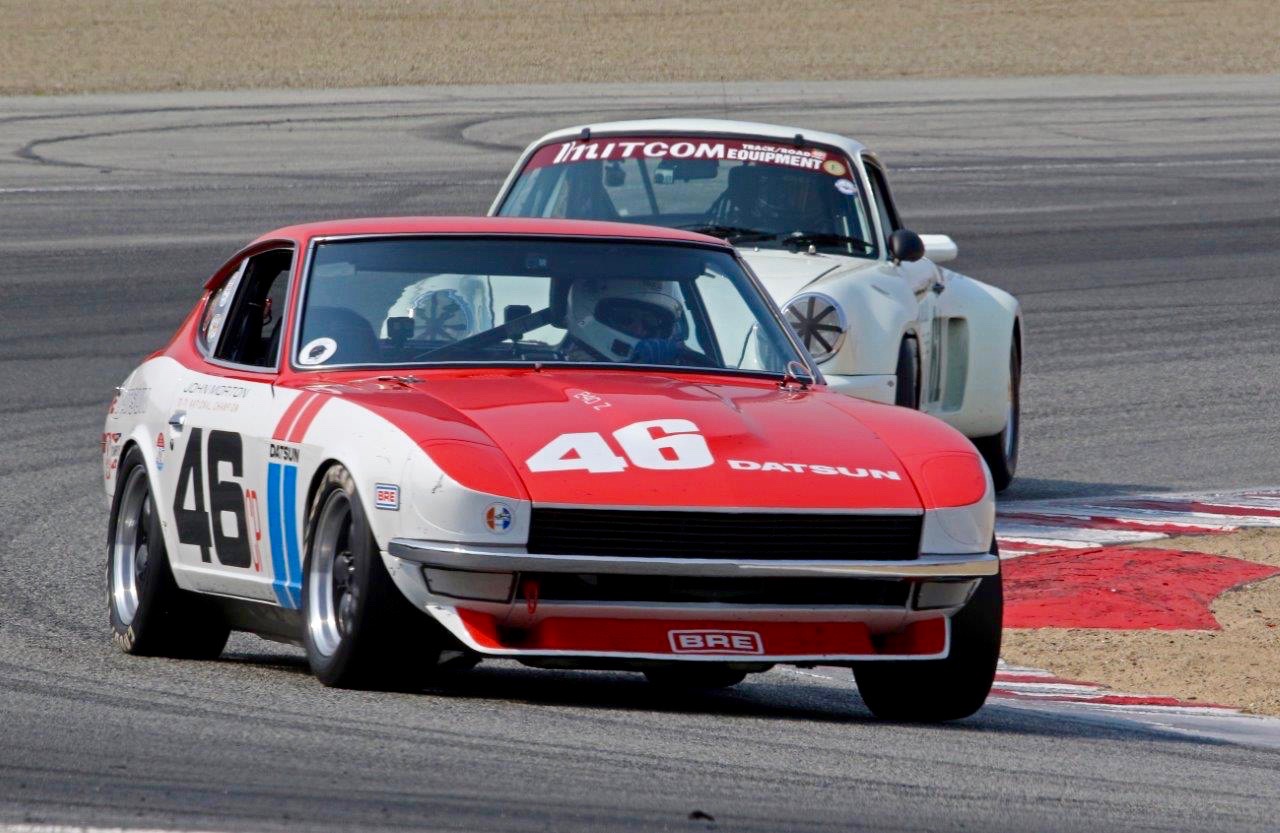 In 2018 RMMR celebrated the racing legacy of Nissan/Datsun, the first time a Japanese marque had been so honored at Monterey. To help celebrate, the two-time (1970 & 1971) national champion Datsun 240Z appeared to contest Group 5A. To add to the memorable moment, driver John Morton was reunited with his championship mount. At age 76, Morton showed no signs of slowing, as he and #46 made a good showing of it. 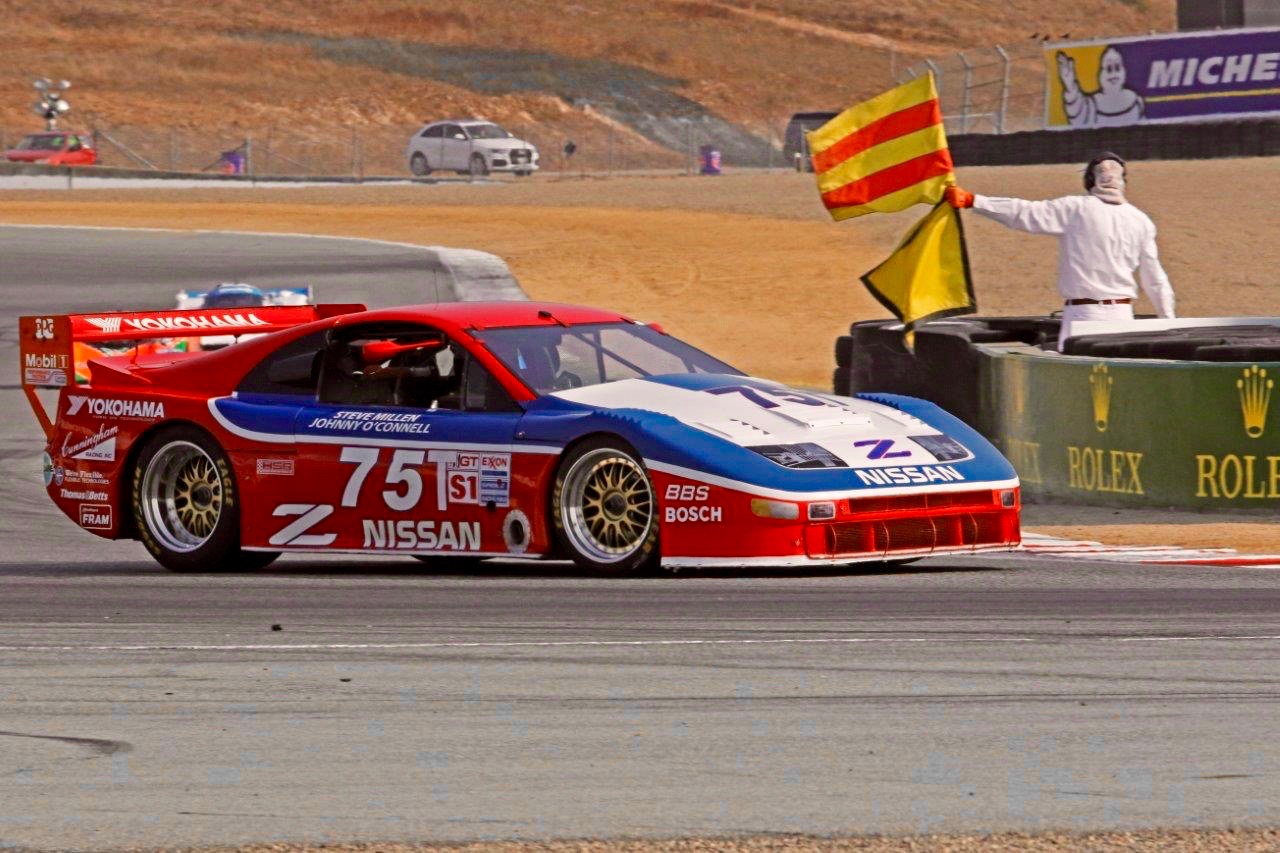 The Nissan/Datsun racing story did not end in the 1970s, continuing strongly to race today. An example of a later car is Craig Bennett’s Nissan 300ZX-T. As the Datsun sports car evolved through a variety of body styles and powerplants, so did the racers based on them. Bennett’s car is a veteran on IMSA GTO campaigns in the late 1980s. Comparing the two pictures, you can see how racing preparation has grown in the intervening years. 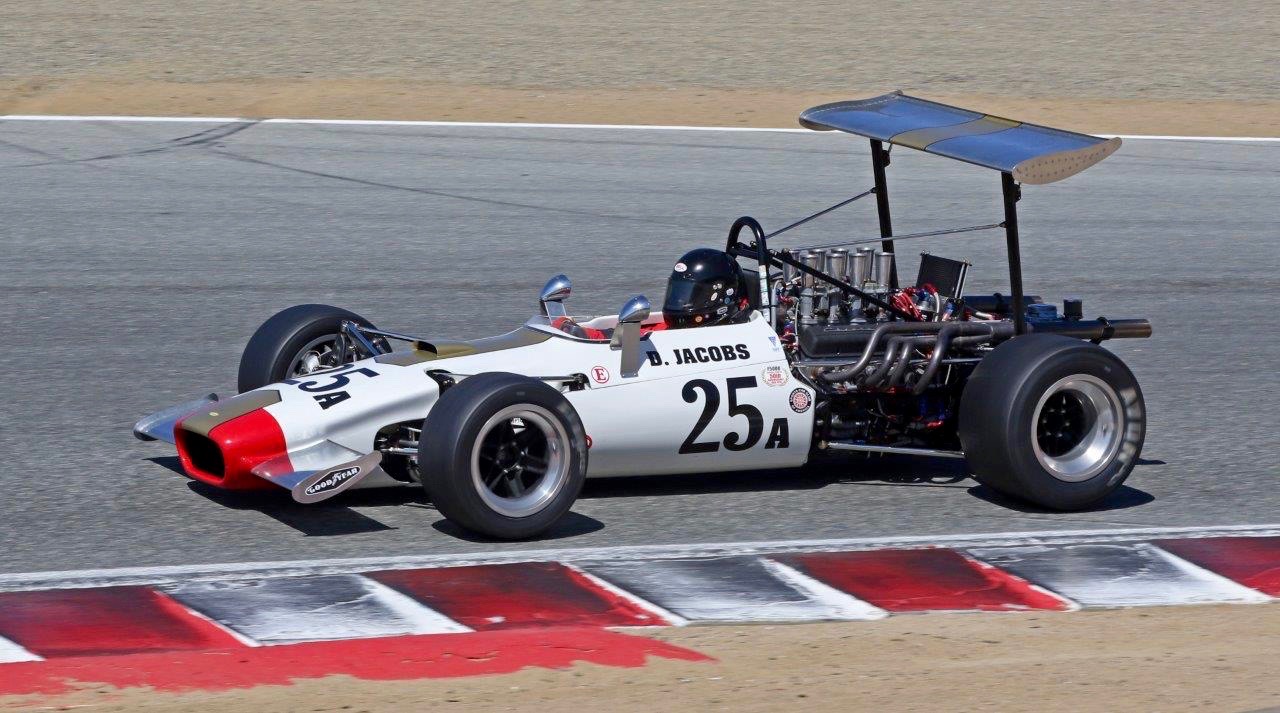 The Formula 5000 fielded a sizable number of cars. Some hailed from as far away as Australia, New Zealand and Great Britain. This class combined open-wheel, formula bodywork with five-liter American pushrod V8 power. Paul Kuhl’s ‘68 Lola T-140 is an early example as shown by its cigar-shaped body with front mounted radiator, high, struts mounted wing and open carbureted engine. 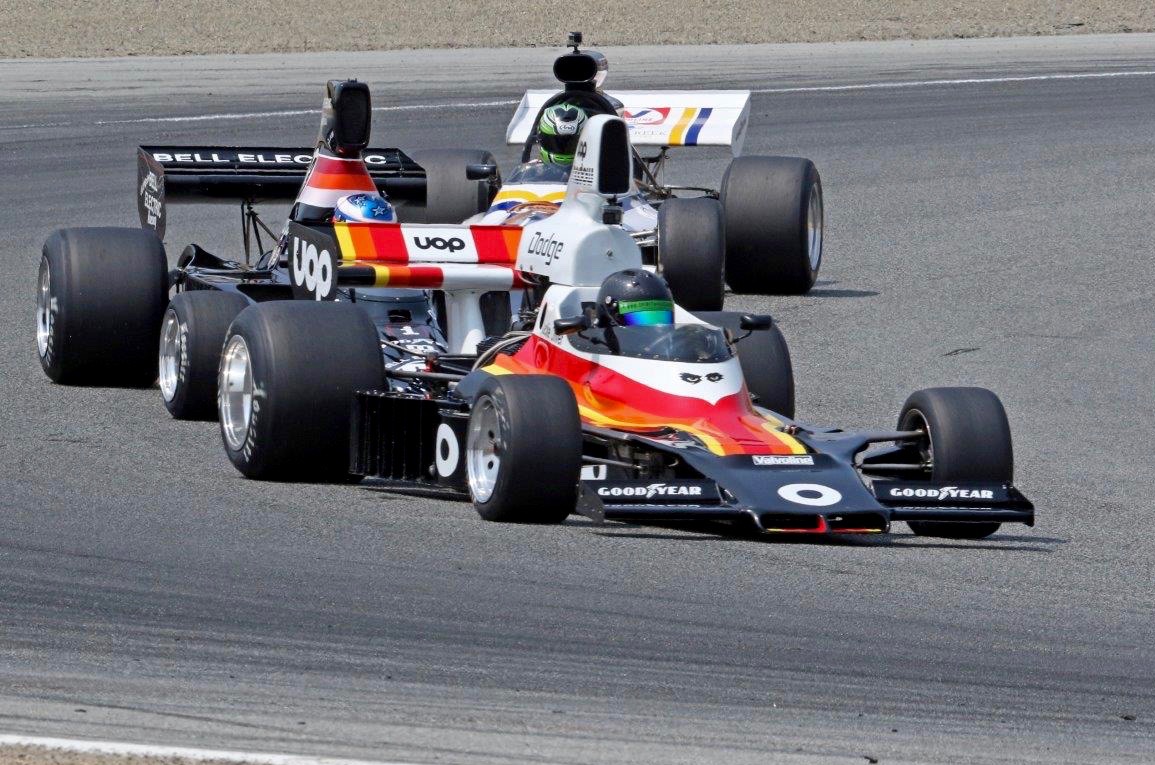 As time progressed, the cars became flatter in appearance, radiators moved back along the sides and fuel-injected engines were enclosed and fitted with high mounted airboxes. The wings became lower and smaller, but likely more efficiently shaped. Racing at RMMR was as close as back in the F5000’s heyday. Here Craig Bennett (‘76 Shadow DN6) leads Andrew Higgins (‘74 Lola T-332) and Michael Collins (‘72 McRae GM-1). 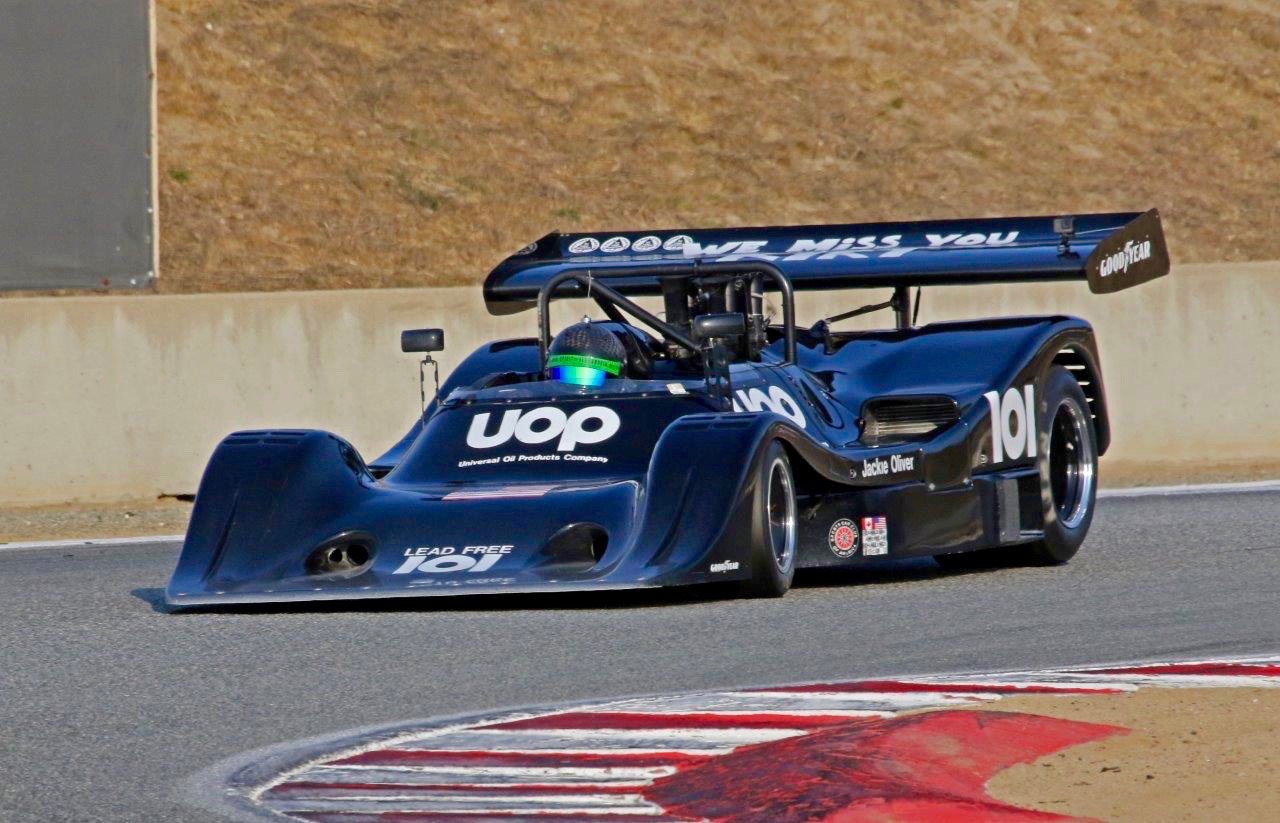 Memories continually come forth as one era in history after each succeeding race group celebrates another. The Can-Am series got its due as a grid of ground-shaking machinery sprang into action. You were transported back to a bygone time when these beasts stirred the racing fans souls. Sadly, the series would fall away and cease to exist, but before it did, there was one last gasp of life as Shadow fielded its DN4. Craig Bennett reprises the role played by Jackie Oliver and George Follmer back in the day.

If you are of a certain age and lived in the Midwest, you may have seen this Sunbeam Tiger before. Raced out of the Sports Car Forum in Columbus, OH, it was driven by Don Sesslar. For the RMMR, John Morton enjoyed some time behind the wheel. The Tiger was another of the cars influenced by Shelby American. It was essentially a modified Rootes Sunbeam Alpine powered by a small-block Ford with Cobra influences. It’s pretty damn quick! 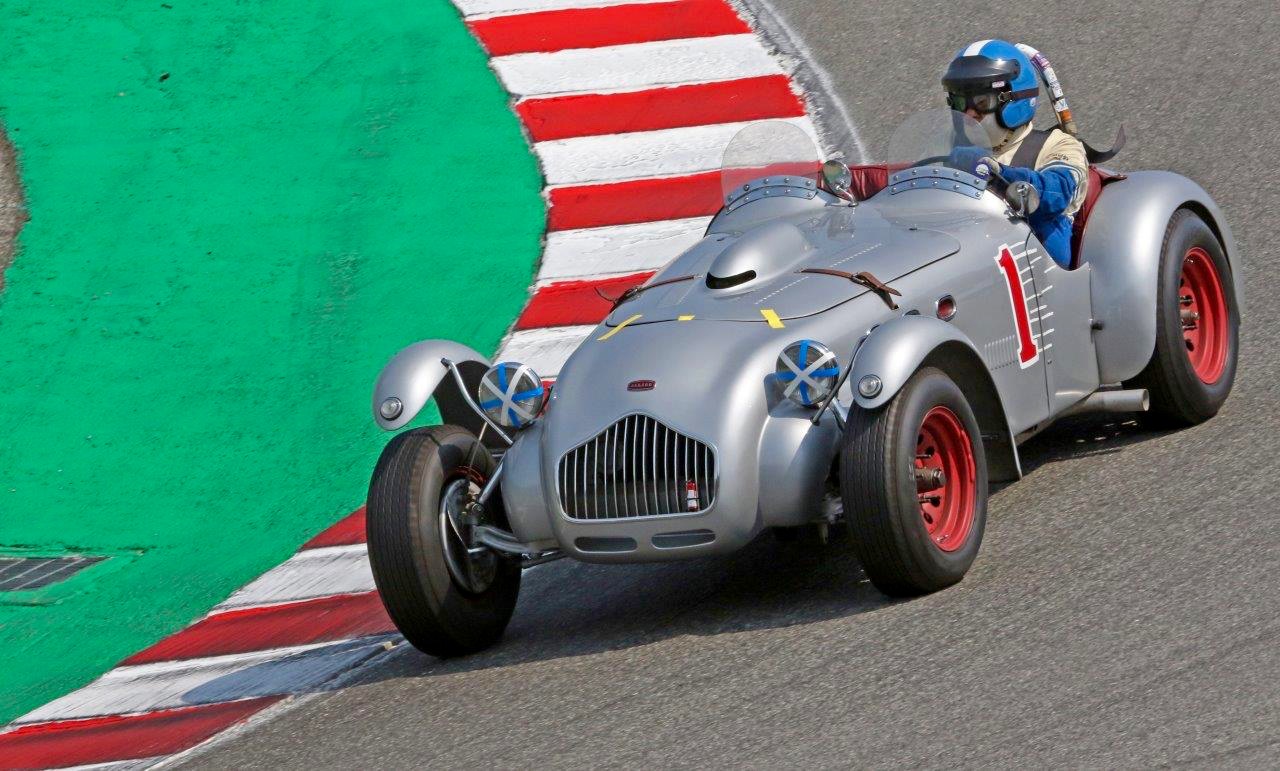 Some say that Carroll Shelby’s idea of combining an American powerplant with an English car may have come from his early exposure to Sydney Allard’s cars, such as Bernard Dervieux’s ‘50 Allard J2. In their time, these were world-beaters based on prodigious amounts of horsepower and “barely acceptable” handling. As time progressed, their somewhat rudimentary approach to racecar design would be superseded, but while it lasted, what a ride! 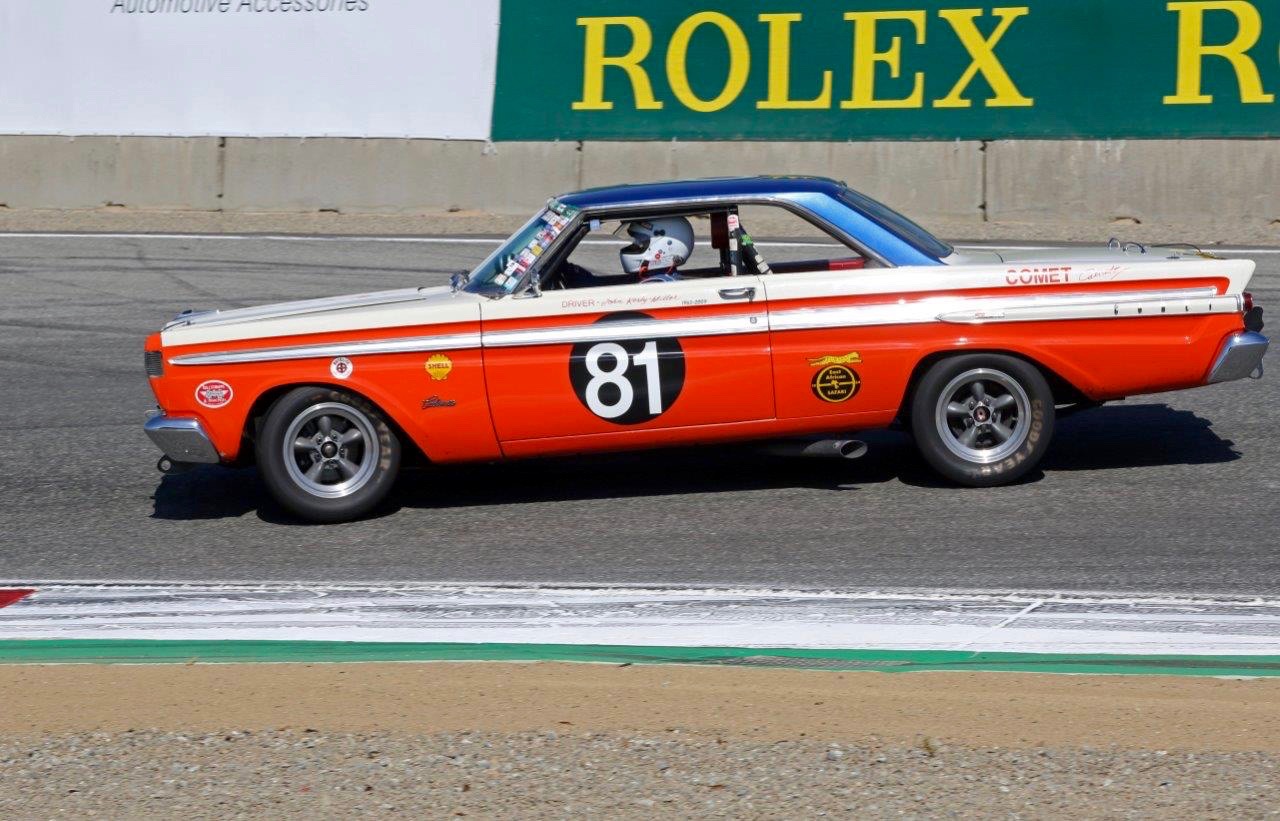 One of the reasons you go to Monterey is to take in the unusual and learn their back-stories. Greg Umphenour’s ‘64 Comet is one such example. It began its competitive life as one of the Bill Stroppe prepared East African Rally cars. Following that ordeal, it came back to the U.S. and was converted into a sedan racer competing at such places as Cotati, Laguna Seca and Vacaville in 1965 and 1966 and that is only part of the story. Tracing the car’s past, it is safe to say it has had almost as many lives as a cat! 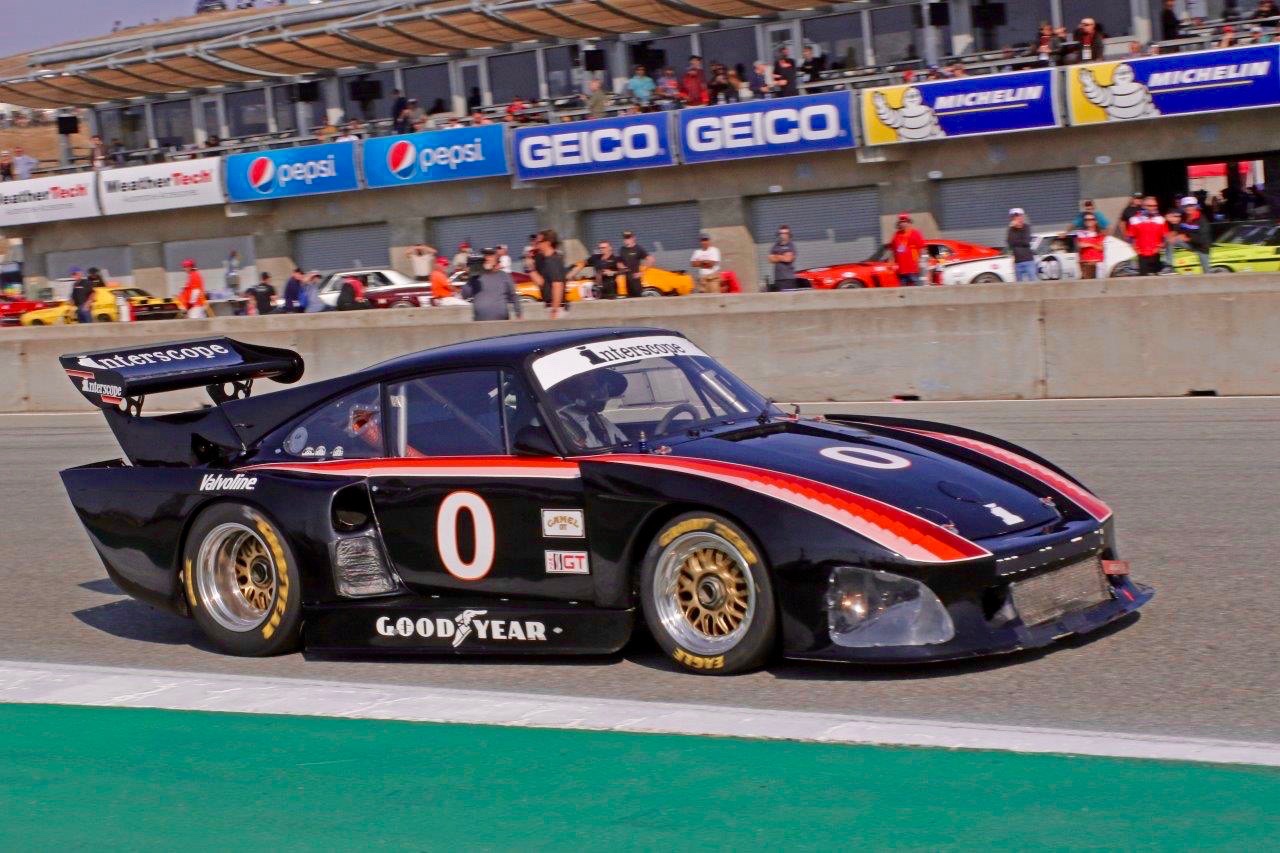 This car is familiar to anyone who watched IMSA racing in the 1980s. Driven by Danny Ongais and entered by Ted Field’s Interscope Racing, this car appeared in multiple rounds of the IMSA championship. Bearing only a brief appearance of a relationship to Porsche’s road-going offerings of the time, they were all racer-tuned to provide mind blowing performance. For those of you who remember this period of racing so fondly, you’re in luck as in 2019 RMMR will honor 50 years of IMSA racing. Dates are set for August 15-18, 2019. See you there!