A new event this year was the Japanese Automotive Invitational held on the grounds adjacent to the Pebble Beach Concours; the Matunes were on-site representing the Chronicles.

A cooperative effort between Infiniti and Motor Trend Group, the JAI showcased significant milestones in the history of Japanese cars. Among them was Caroline & Tommy Kendall’s 1982 Malibu Grand Prix Mazda RX-7 racecar. In its competitive lifespan, it would garner five season championships for three different drivers including Kendall. Its list of over twenty wins includes victories at Daytona and Sebring. Kendall has chosen to keep the car, as it is so significant in his successful racing career.

Since the debut of Datsun (Nissan) & Toyopet (Toyota) at the Los Angles Imported Motor Car Show in early-1958, Japanese cars have become a mainstay of the American automotive consumer. But their start in the U.S. market was hardly awe inspiring, Nissan selling just 1,300 cars in 1959. In his book on Nissan/Datsun, author John Rae tells stories of Datsun personnel going door to door in Japanese neighborhoods selling pickups like this one to Japanese landscapers. This ‘59 Datsun 220 resides in the Mike Malamut Collection. 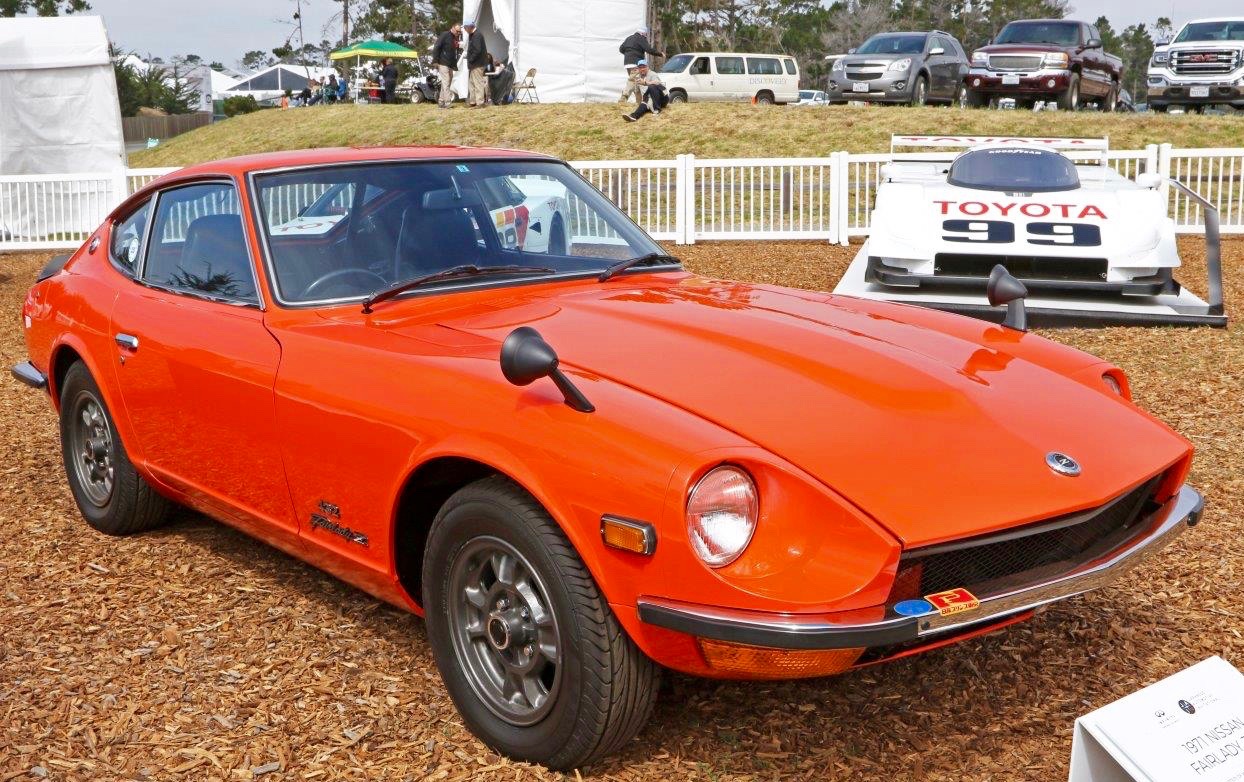 Looking like a run-of-the-mill 240Z, this is a ‘71 Nissan Fairlady Z432, produced only for the JDM (Japanese Domestic Market). It was separated from the American 240Z by its power train; a DOHC, 24 valve Six making 160 horsepower coupled to a five-speed transmission, feeding a limited-slip rear end. They were rarer, total production at around 42 units and more expensive at nearly double the price of the base Fairlady. Newie and Mark Brinker brought their example to the show. 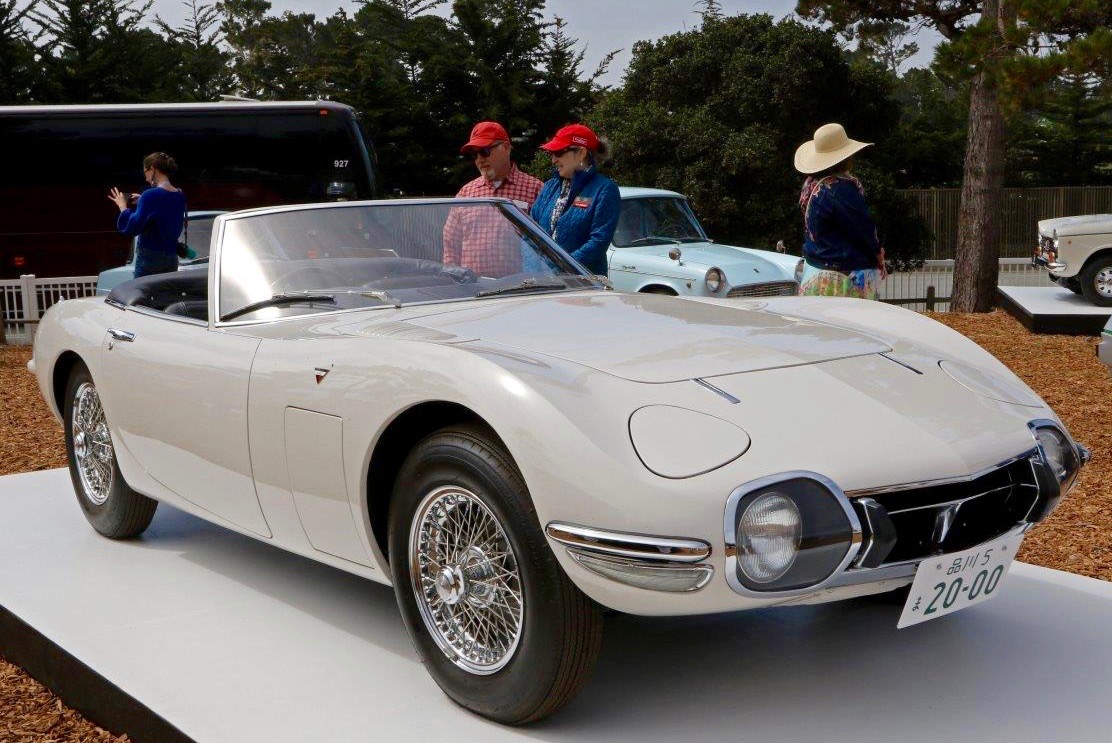 This ‘67 Toyota 2000GT Roadster appeared courtesy of Takeshi Moroi and the Petersen Automotive Museum. It gained fame when it would appear in the James Bond film You Only Live Twice driven by actor Akiko Wakabayahi. The 2000GT was Toyota’s attempt to identify as the builder of excitement not just basic transportation. They contracted with Yamaha to build a limited number and today they are widely sought and command big numbers.

The Dome Museum in Japan in cooperation with the Petersen Automotive Museum made sure the show included this example of a 1978 Dome Zero. A racecar manufacturer, Dome began work on the Zero as a road going Supercar, unveiling a prototype at the Geneva Auto Show. Low, sleek and displaying the wedge shape so prevalent at the time, the car excited the automotive community. Unfortunately, plans to bring it to production ran afoul of the regulators and the project was stillborn. Attempts to convert it to a racer came to naught. Today we are left with a few examples that beg that question, “What might have been?”

This is a ‘72 Nissan Skyline GT-R “Hakosuka” owned by Eric Bizek. These were limited production, racing oriented cars and followed the American Musclecar formula of a big engine in a little car. The Japanese added lightening tricks to up its performance. From the outside we can see the rear fenders modified for wheel clearance and the factory’s rear spoiler to improve aerodynamics. These, like other rare Japanese models, have surged onto the radar screens of American collectors recently. 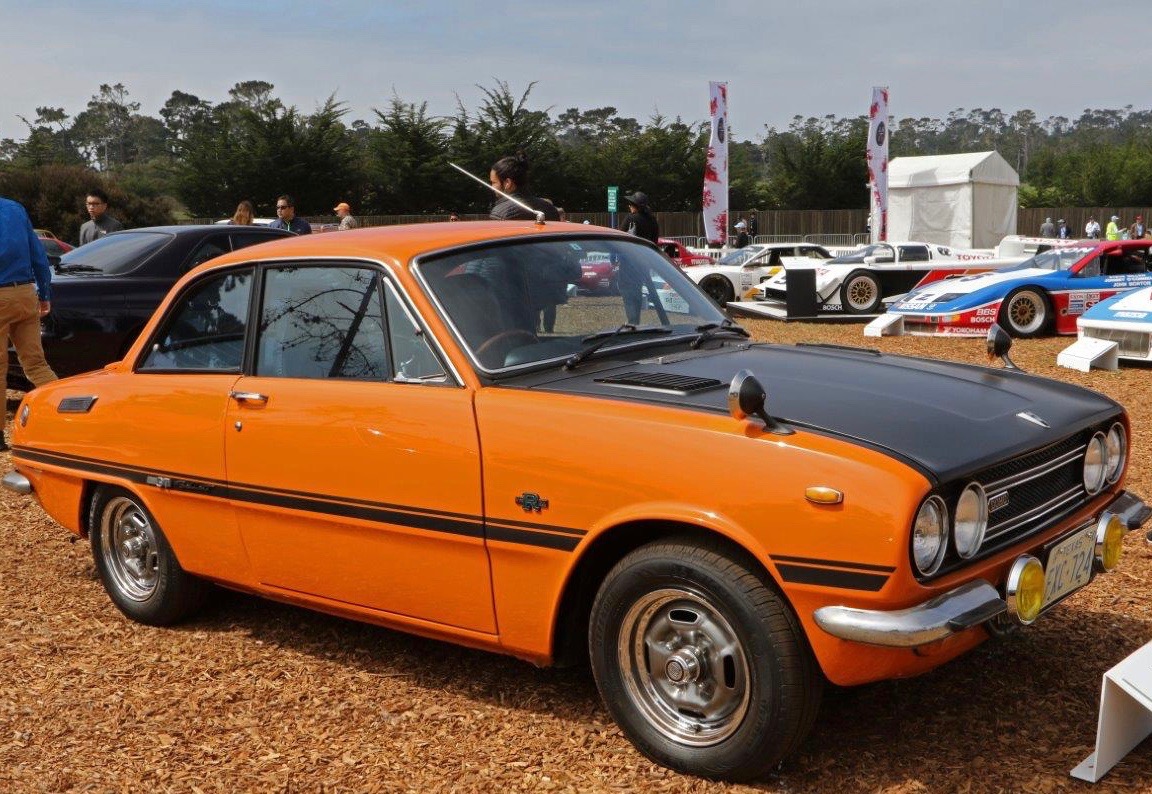 Not to be left out of the low production, racing oriented field, Isuzu had the ‘70 Isuzu Bellett GT-R. Starting with their small coupe, they added their DOHC 1.6 liter four-cylinder engine and cloaked it in a distinctive paint scheme. The result was a hit with consumers and racers alike, earning success in circuit racing and rallies. Noted Japanese collectors Newie and Mark Brinker brought this one.

Knowing of Adam Carolla’s weak spot for Japanese racecars, it was not a surprise his collection would be represented at the JAI. He brought this Datsun 510. Originally the third car on Peter Brock’s 1972 2.5 Trans-Am Challenge team, it was reserved for guest drivers. It is finished as NASCAR driver Bobby Allison drove it to third in that year’s Laguna Seca round.

Infiniti introduced their Prototype 9 at last year’s Pebble Beach Concours. It is as stunning in person as it is in photos. The car combines styling cues drawn from 1940 racers with modern electric vehicle underpinnings. At the same time, it seems to exist in the past and present. You can get lost in all of the surface details and in numerous touches like the gauge panel and “brake drums” that actually hide modern disc brakes.

As mentioned, the Japanese Automotive Invitational held its inaugural event at the 2018 Pebble Beach Concours d’Elegance. It was a great start and we look forward to seeing what Infiniti does with it in the future. Maybe it will become the foundation for a celebration of all things Japanese automotive like Concorso Italiano has become for Italian cars and Legends of The Autobahn is for German ones.