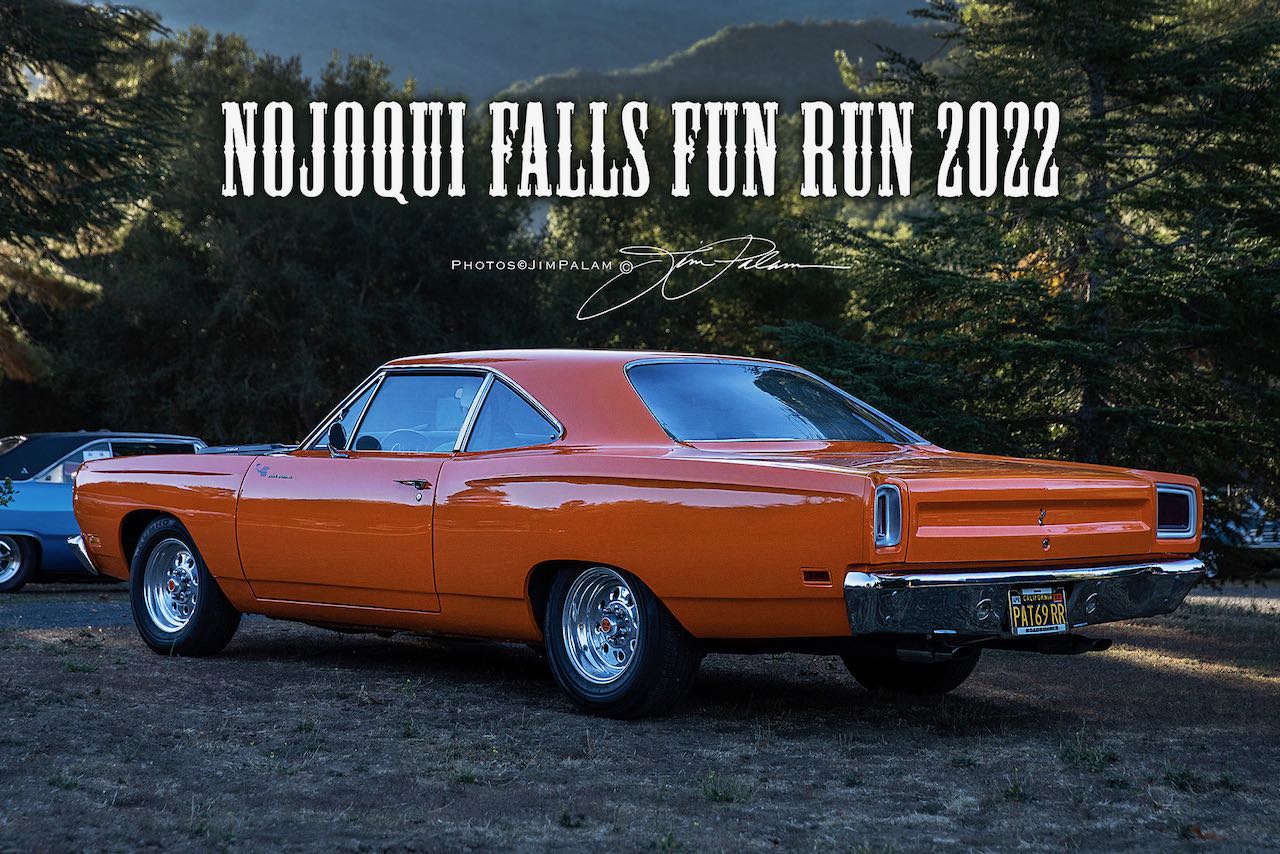 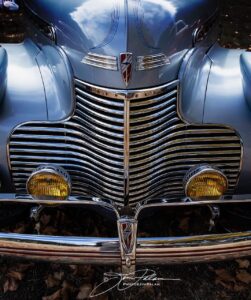 Nojoqui Falls was originally named for a Chumash village named Naxuwi, which means meadow. It is a Santa Barbara County Park located on Alisal Road, 2.6 miles southwest from Solvang, CA. An old legend has it that a Chumash Indian chief held an all-night prayer vigil asking the gods to help bring water to end a long period of drought. In the early morning, a beautiful woman appeared and led the chief to a fern-covered glen. The woman arose into the air, and as she disappeared, her flowing white dress turned into a beautiful waterfall. Nojoqui Falls was born, and the drought was broken.

A new legend – started by me for this report – is that the 190 Car Guys who brought their shiny hot rods, classics, customs and cruisers to the dusty, gopher-gobbled park meadow for the NOJOQUI FALLS FUN RUN 2022 also prayed for rain to come after the show – to rinse their rides clean before parking them in their man caves. And lo, don’t you know it, it rained for two days after the show! OK, the only part of this new legend that’s true is the two days of much needed rain that did materialize here in California.

The weather for Sunday’s show started off overcast and chilly but quickly turned to ‘Autumn in California’ perfection. Most of the participants brought their cars from cities and towns in the Central Coast – like Paso Robles and Arroyo Grande up North and Camarillo and Ventura down South. There was of course a strong contingent of local cars from the Santa Ynez Valley, and a few Central Coast car clubs made the scene. Joe Gonzales of the Draggers brought his absolutely beautiful ’40 Chevy Special Deluxe coupe. That’s the coupe’s front end and grille in the inset shot above, right.

When editing my photos to pick the lead image I kept coming back to this ’69 Plymouth Road Runner, top. Over and over, I thought, “Hey… it’s a Road Runner… and this is a Fun Run.” Now that’s kismet kool! So, thanks to Pat for bringing his Road Runner – and thanks to all the club members, volunteers, participants and attendees for bringing your Car Guy love and magic back to Nojoqui Falls for the 50th time – for the always fabulous Fun Run! 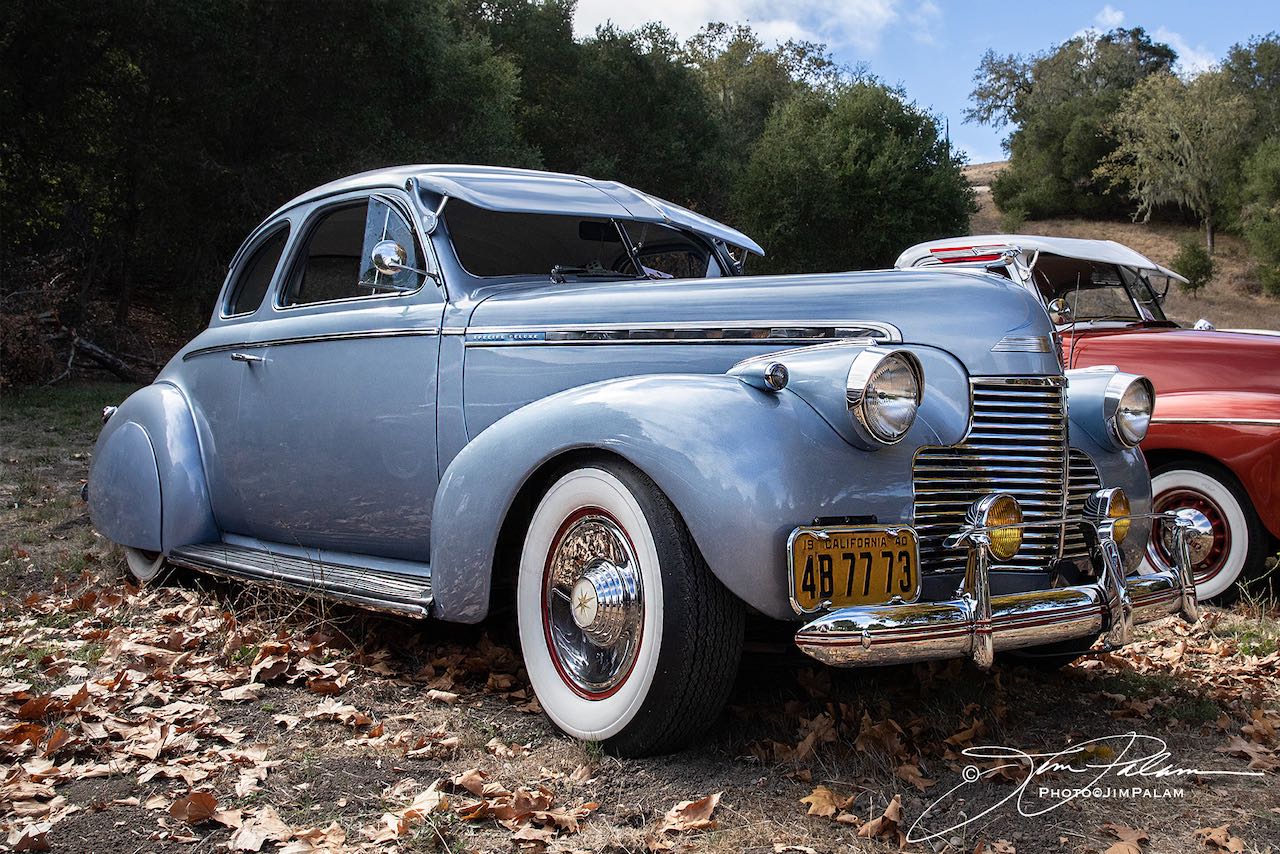 Chevrolet built 25,537 Special DeLuxe 2-doors in 1940, but it took the creativity and skills of Joe Gonzales of the Dragger’s Car Club to turn one into this rolling showcase. Joe’s DeLuxe gets it power from a 216-cubic-inch straight-six Stovebolt, and he added disc brakes up front for modern stopping power. According to Joe, the Draggers are a 99.9% traditional car club with a mission to keep the old-school whitewalls and hubcaps look of the 1950s in the public eye. Show goers couldn’t keep their eyes off this stunning coupe, so mission-accomplished Joe! 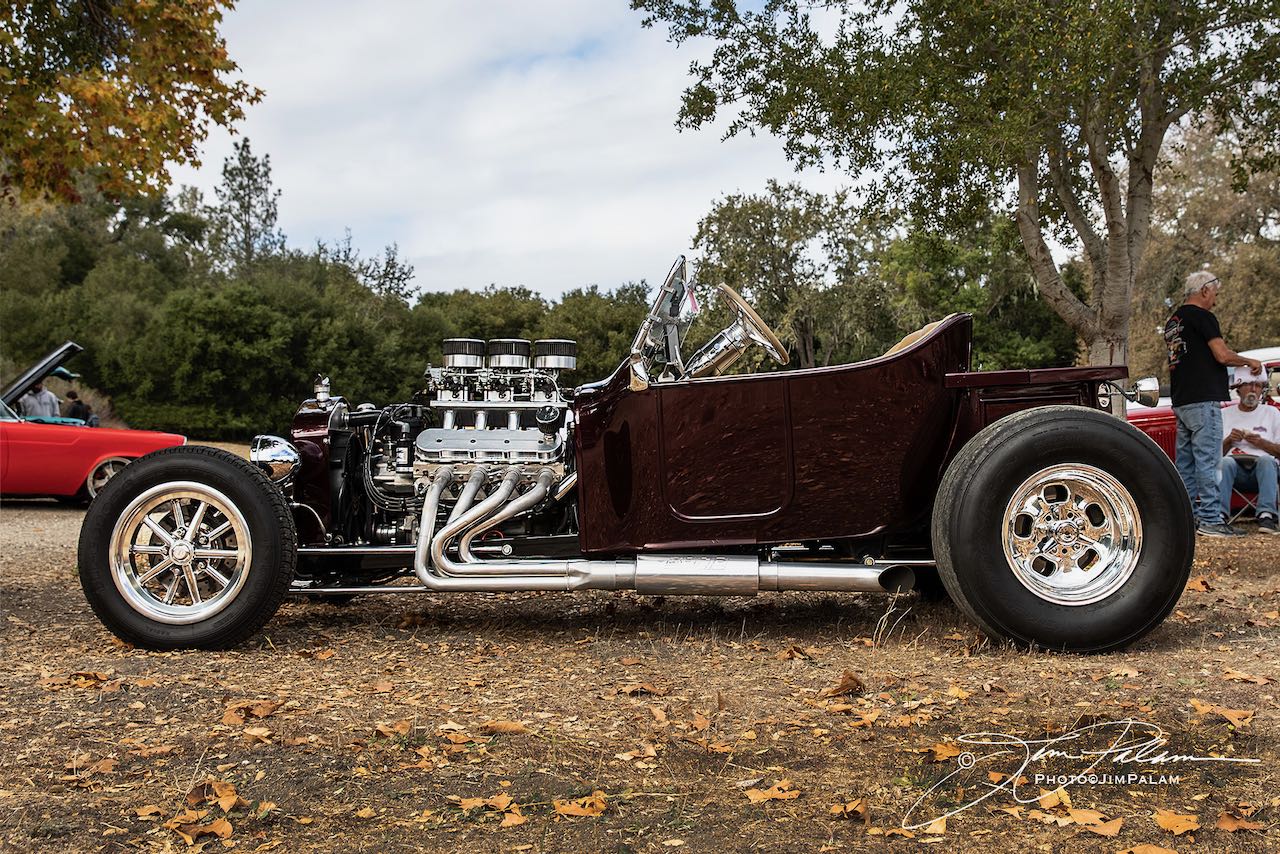 The first time I photographed Bill Maropulos’ tasty ’23 Ford T roadster was back in 2019 at the Ventura Rods & Roses show. It wasn’t the beautiful deep Molten Red Pearl paint or the four-inch dropped front axle that initially drew me to it – it was the pro-built 604 horsepower LS2 engine. Crowned with three Holley 500-cfm carbs on a custom-machined Hogan’s Racing intake manifold, the engine also features ported heads and titanium valves under billet valve covers. 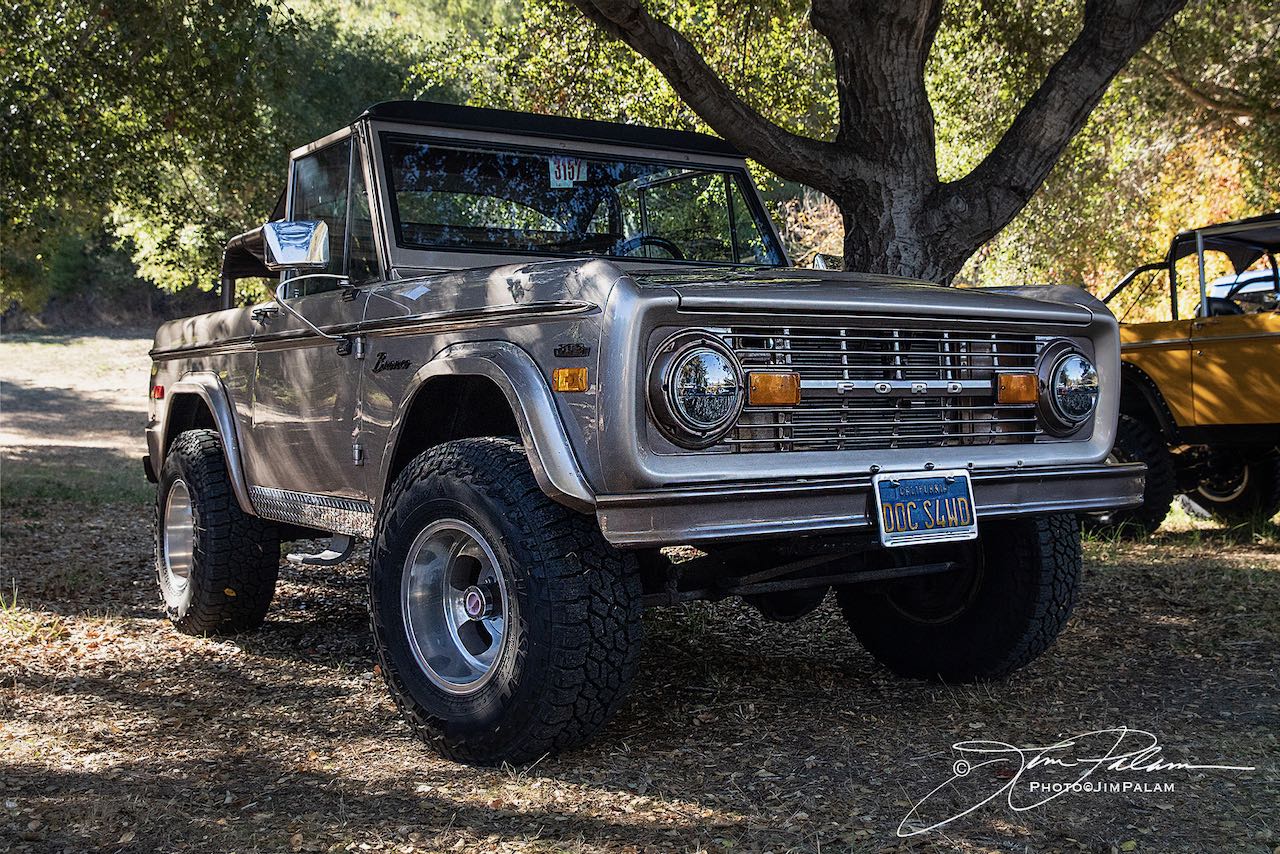 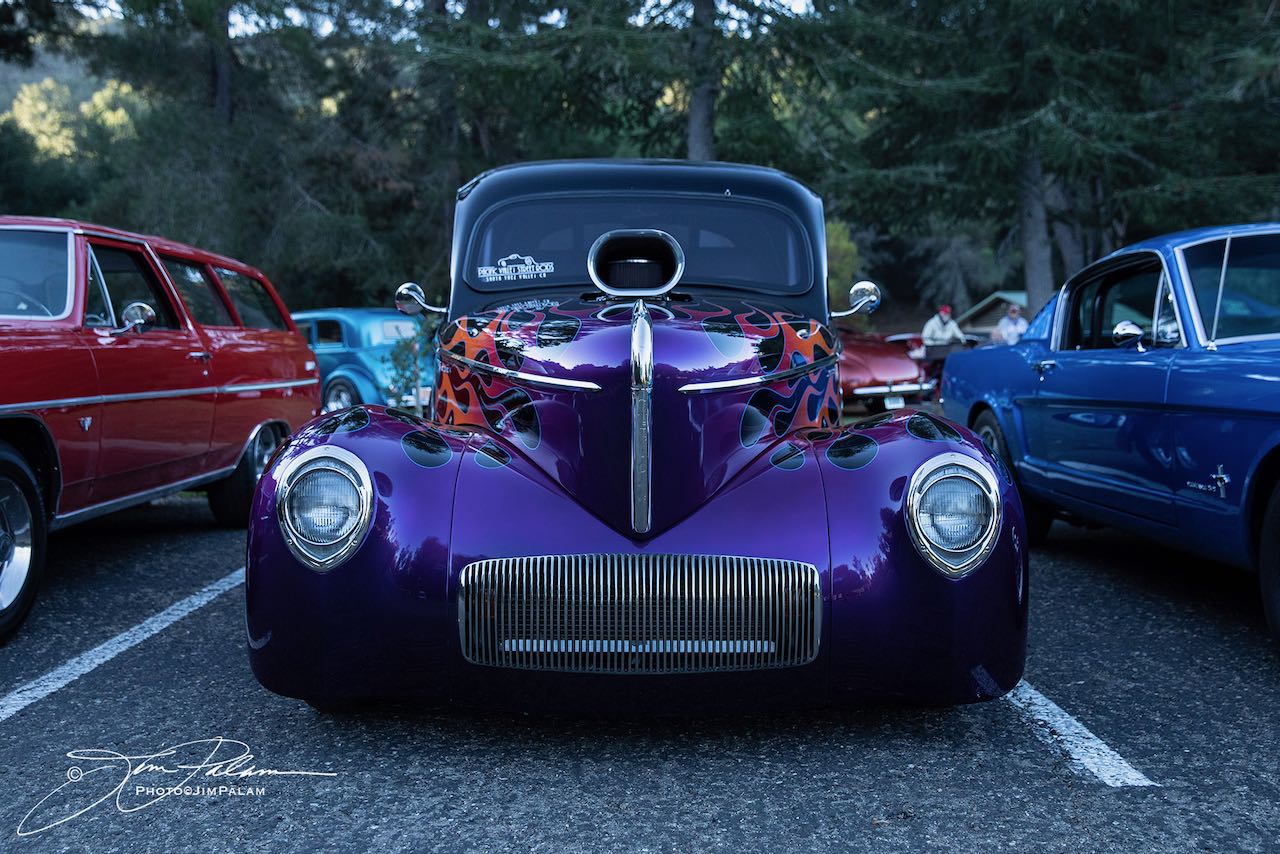 My buddy Hank Carralejo of Santa Ynez has been actively participating in the street rod scene in the Central Coast since the 1960s. He has a penchant for Pro Street jaw-droppers with fat tires, wicked flames and whirring superchargers. In this shot we are nose-to-nose with his impressive ’41 Willys. It gets its brutish power from a blown Chevy 468 hooked to a Turbo 400 transmission. It gets its love from Hank and an endless parade of admirers!

I had to wait until I was 18 to get my license to drive in New York City where I grew up. The car I would drive was my parents Plain Jane ’62 Chevy Biscayne. I was thrilled to drive, but honestly the Biscayne was no Chick Magnet. Now, had I been lucky enough to drive a head-turner like Michael & Yvon Frazier’s rare, silver blue ’62 Belair Bubbletop, I’m sure Raquel Welch would have been snuggled-up close to me as we cruised the mean streets of Astoria, Queens! 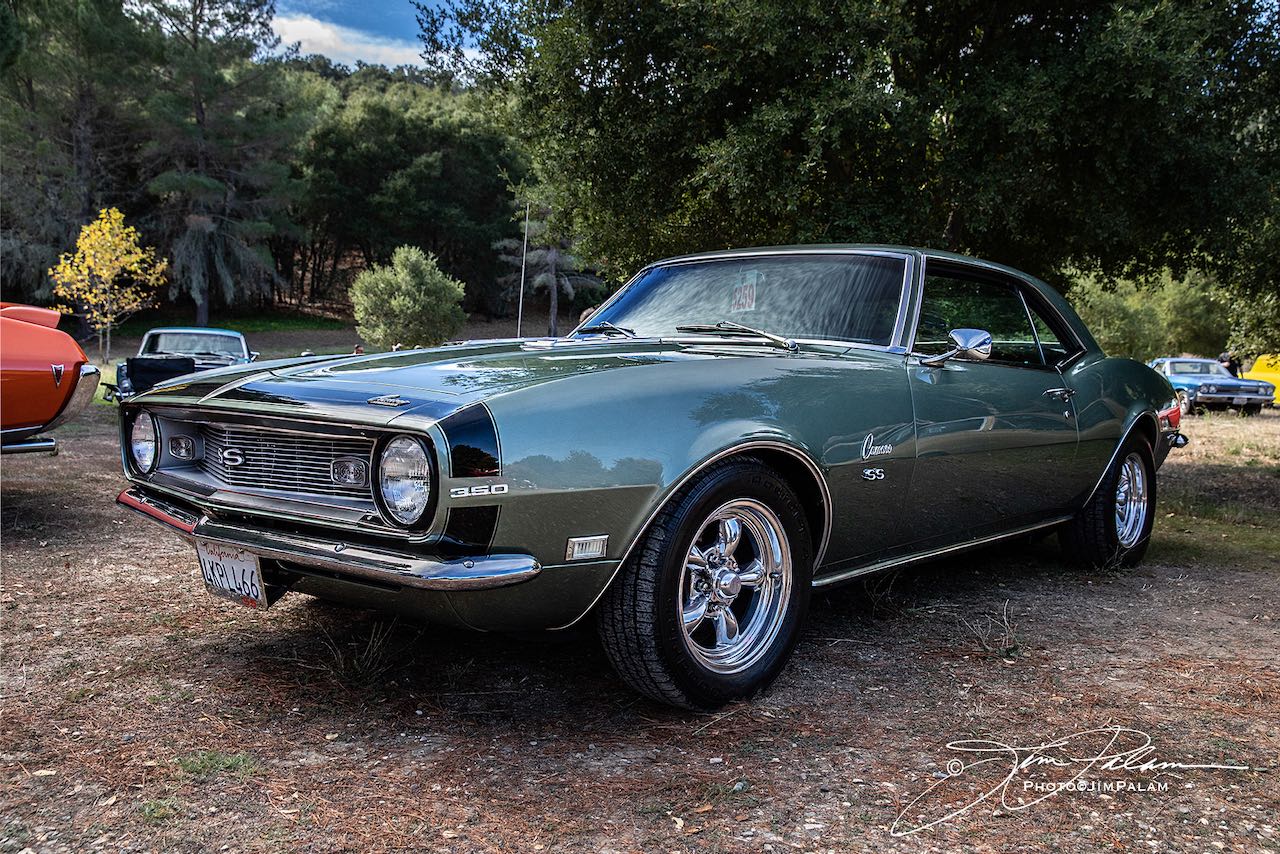 This beautiful Jade Green ’68 350 Camaro started its life as a 6-cylinder, 3-On-The-Tree grocery getter. After an inspired year of restoration and modification by Lynn and Keith Raphael, the Camaro is now getting admiring looks and kudos from the enthusiast community. It’s not unusual to find both Lynne’s Camaro and Keith’s eye-poppin’ supercharged Chevy 350 powered ’61 MGA roadster pleasing the crowds at shows up and down the California coast. 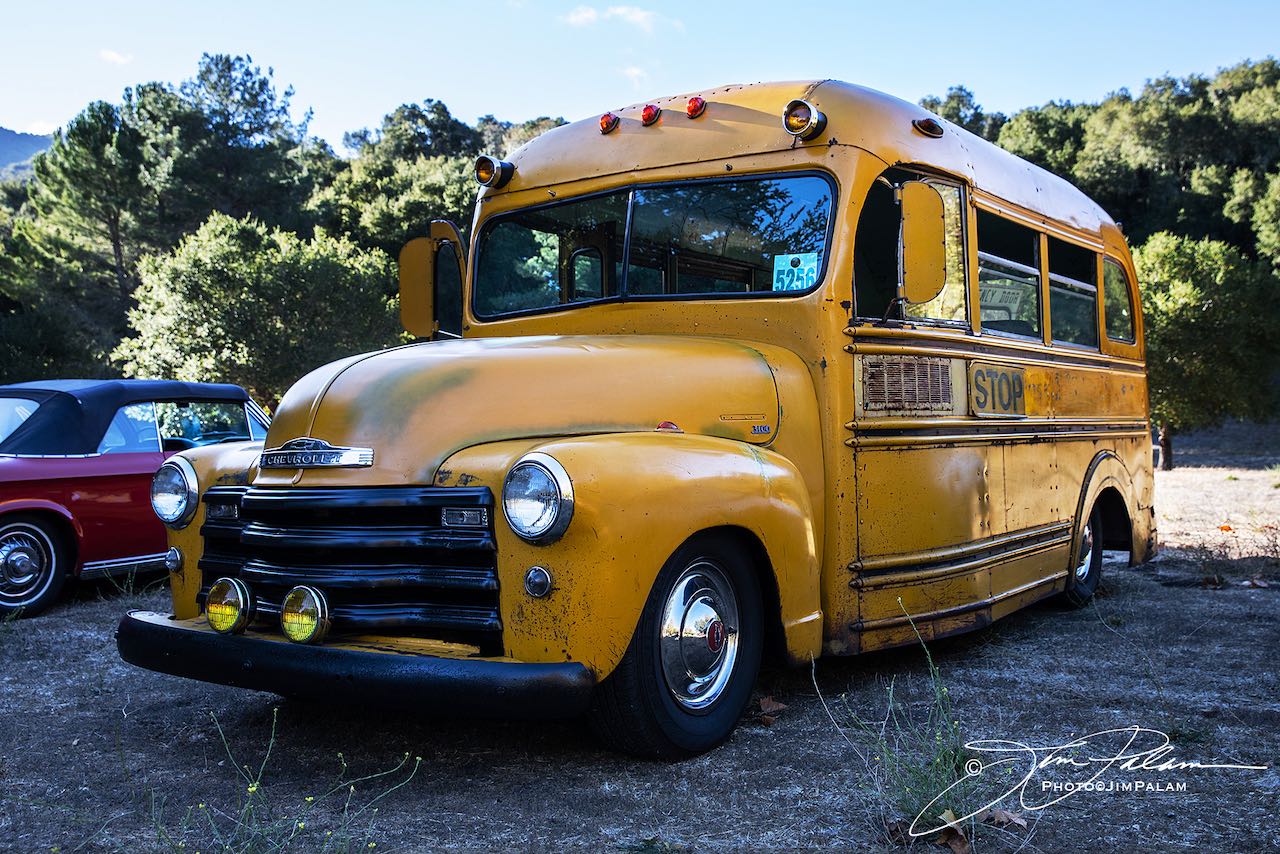 If you grew up in rural America in the 1940s -1950s, there’s a good chance you headed to your little red schoolhouse in a little yellow school bus – like this ’49 Chevrolet Model 3100, 8-passenger short bus. The interior of this restored people hauler, with an “as you found it paint job” is somewhat sparse, but that’s how it would have been during its many years of service. No entertainment screens, no Bluetooth or USB outlets. Oh, the horror! 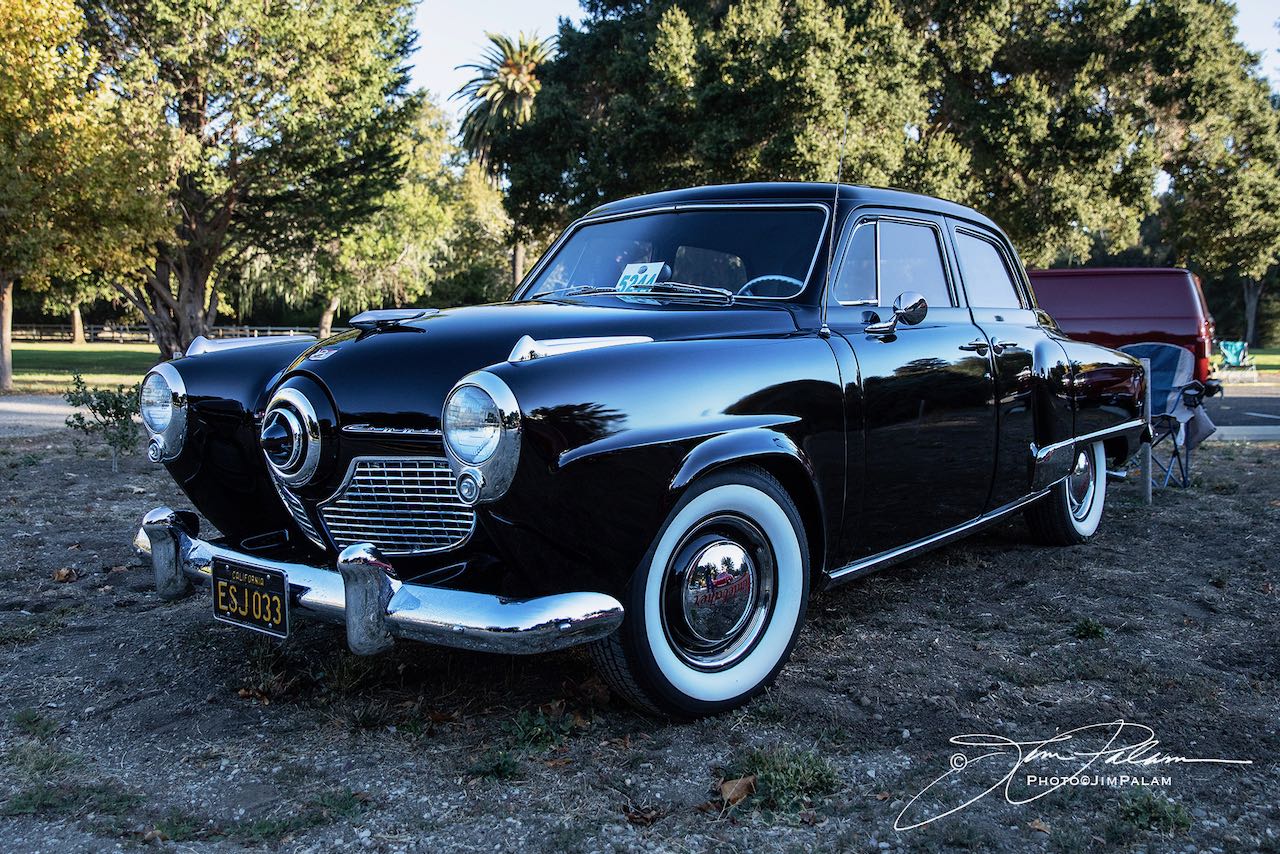 The Studebaker Commander was the South Bend, IN company’s mainstream model. It made its debut in 1927, and with the exception of production years 1936 and 1959 to 1963, it continued until 1964. If you’re like me you have a soft spot in your heart for the Raymond Loewy Associates designed Studebakers – like this beautifully restored and upgraded Bullet Nose ’51. The ’50 Champion was Studebaker’s all-time highest production model. Studebaker unfortunately shut down production of all models in 1966. 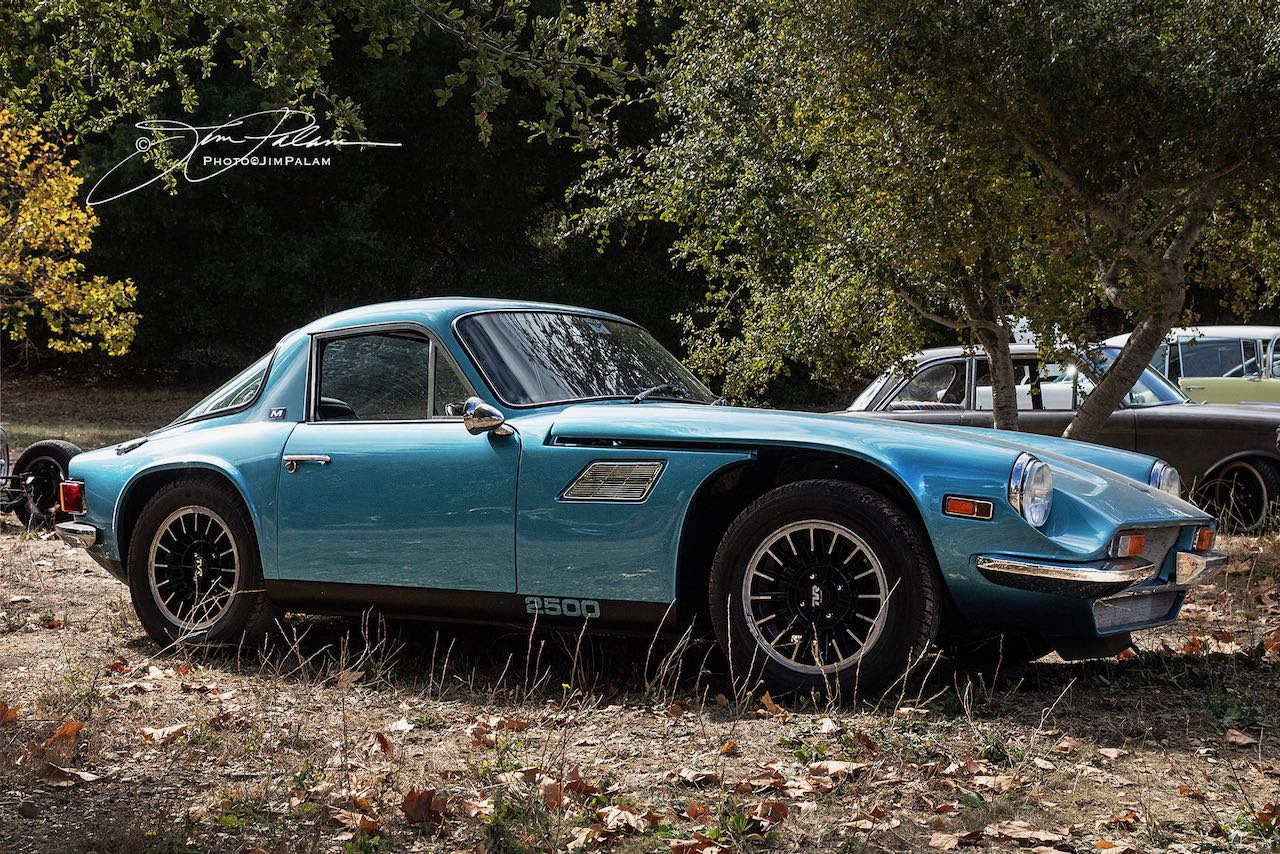 Did I mention the gopher-gobbled fields at Nojoqui? This ’71 TVR Vixen 2500 was parked no less than 6 inches from what could be described as a gopher sinkhole. Fortunately, the car’s owner Chuck Huber is an accomplished aerospace engineer and expert driver; there was no repeat of the Corvette Museum debacle! TVR Vixen 2500s were built between 1971 and 1972 and powered by Triumph 2.5L inline-sixes. Chuck’s engine is fed its fuel through triple Webers. 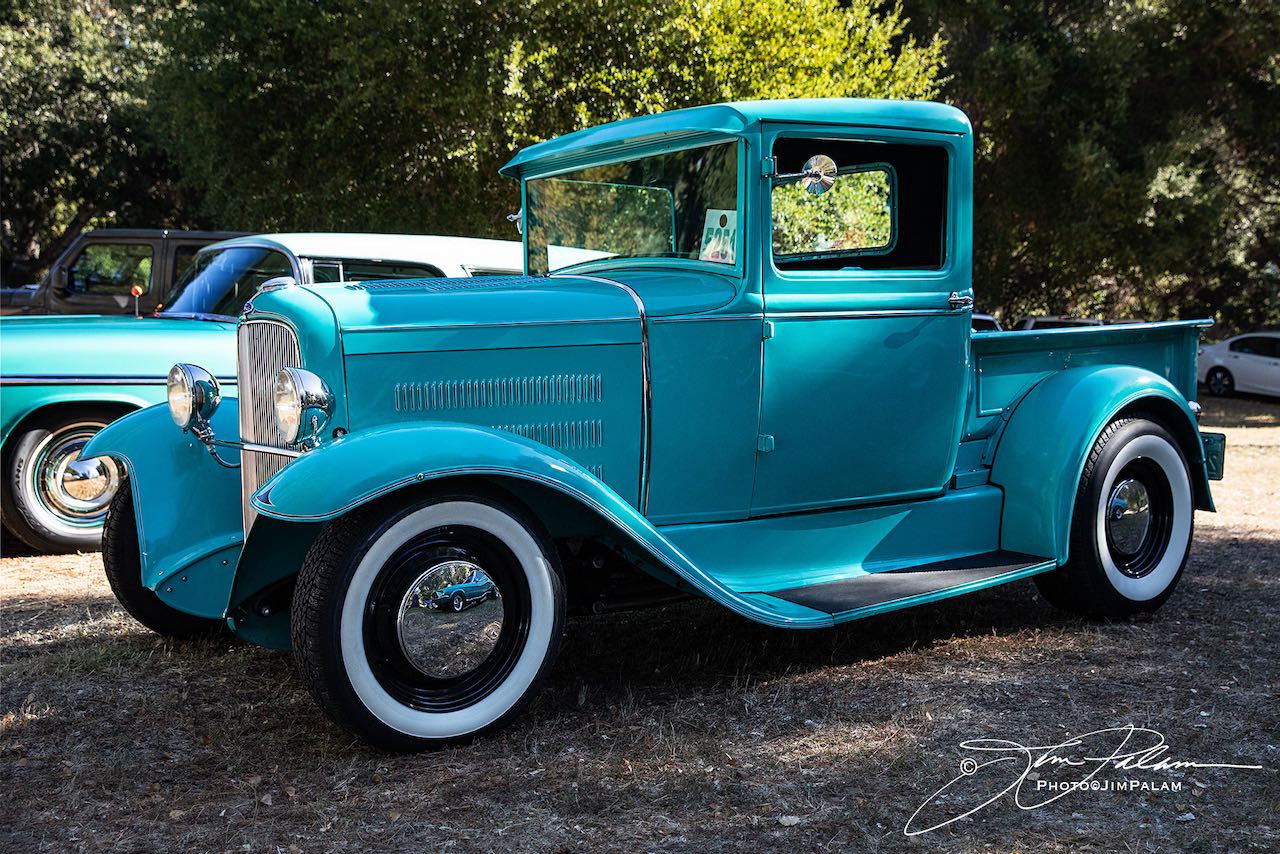 This is a test: Stare at this blue truck for 10 seconds. Are you smiling? You should be. Studies have shown that early Ford pickup trucks finished in soft baby blue paint transmit smile inducers through the retina’s (hot) rods and (ice cream) cones to the brain. Test subjects have often been heard whispering phrases like “Oh yeah baby”, “I love this” and “I’m painting the Tesla baby blue when I get home” during observation!

From 1961 through 1963, Ford broke away from its Squarebird (Thunderbird) designs by releasing the restyled Bullet Birds. In addition to the fabulous jet engine tail lights, the new ’61, 2-door Coupes offered 390-inch V8s with 330, 375 and 401 horsepower options. These beautiful Thunderbirds – like this pristine red example featured here – were not all that light, weighing-in with a curb weight of 3,958 pounds, and not that affordable, with sticker prices in the upper $4K to mid $5K range. 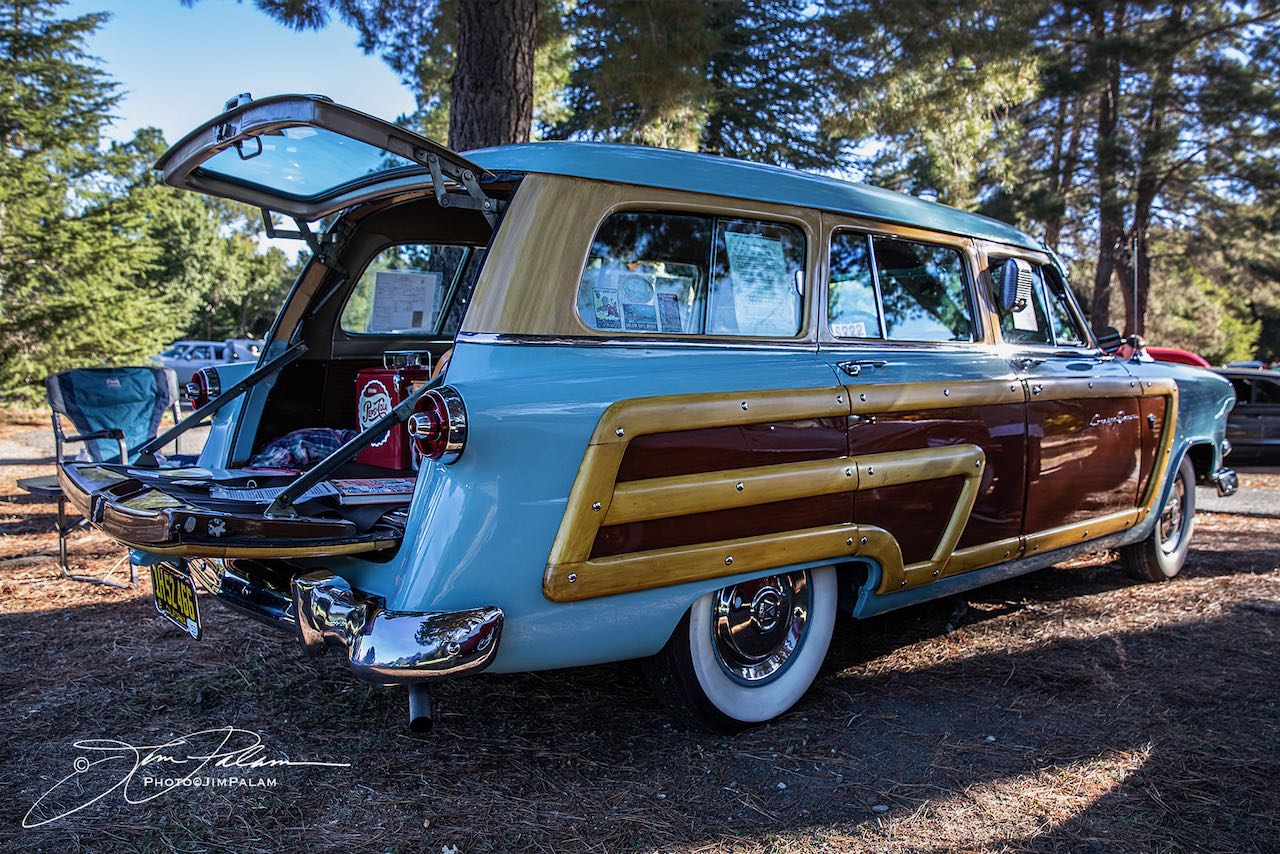 If you remember riding in a ‘53 Ford Crestline Country Squire station wagon, there’s a good chance there’s some gray in your hair and perhaps a few aches in your bones – unless of course you’re a younger vintage car enthusiast or a lucky owner like Scotty Cramolini. This model was top of the wagon line for Ford in 1953. This was also the year where midway through Ford stopped using real wood for the signature trim and began using wood-grained fiberglass trim – and the last year for the venerable flathead V8. 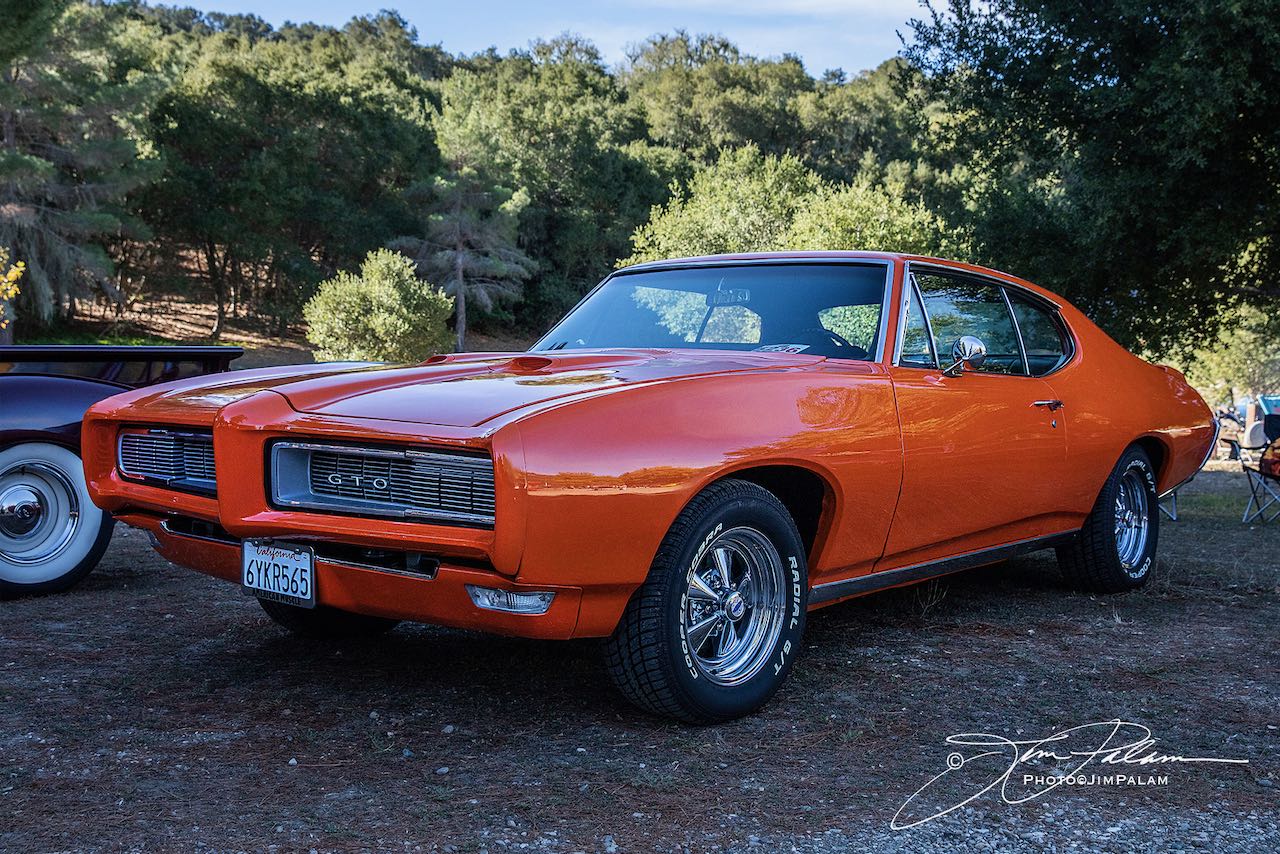 One of the emotions that’s ever-present in the enthusiast community is love. We don’t just like cars, we love-love-love cars. And it was ‘love’ that brought the owners of this backyard-restored GTO together. When Lorin and Louisa Cuthbert first started dating it was in Lorin’s GTO, the same car they eventually honeymooned in. Decades later Louisa found a project Goat and, thanks to some free time during the Covid sheltering-in phase, this backyard restoration now propels them to car events all over California. You gotta love it! 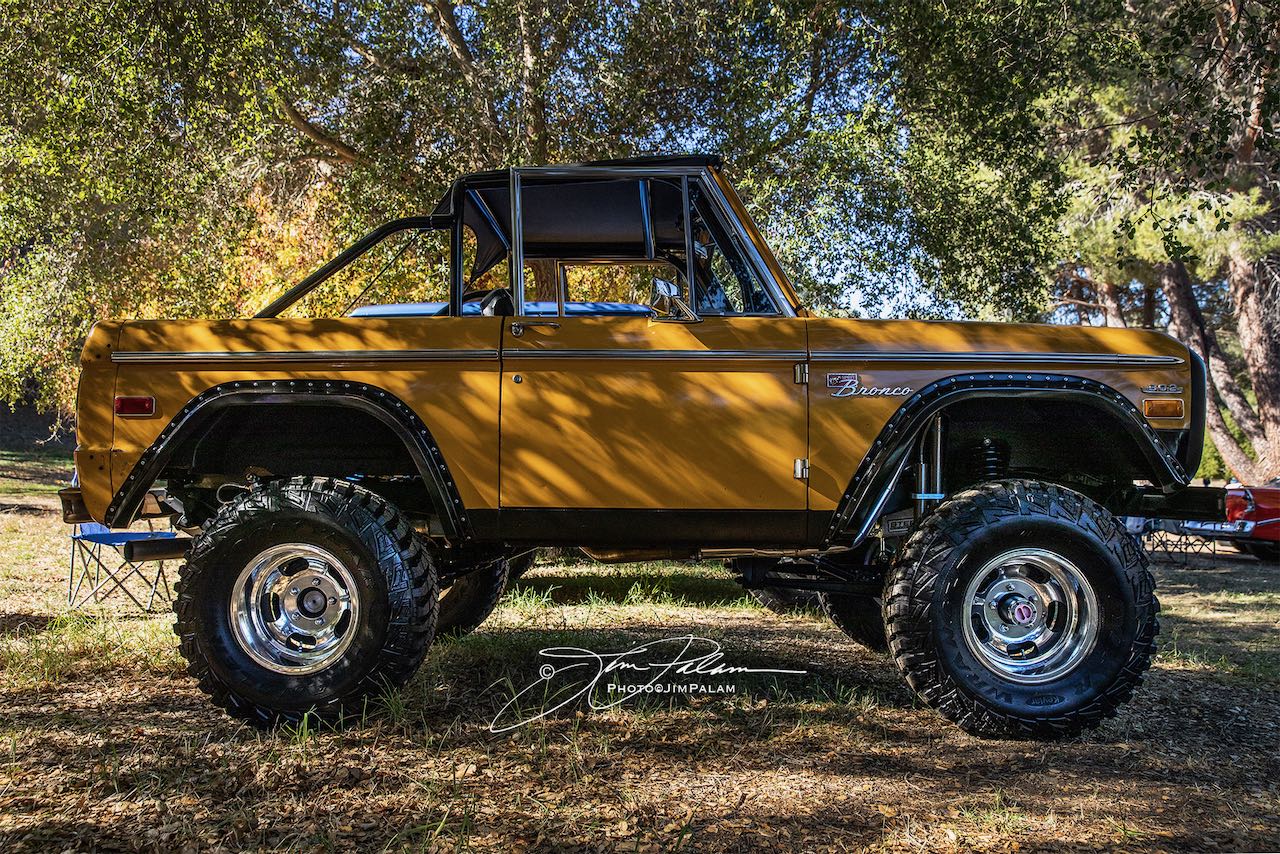 OK, just hold on to your saddle horns; yes, I am featuring another Bronco. When you live and play on the terrain of California’s Central Coast, you develop a relationship with trucks and off-road vehicles. There were at least two-more tricked-out Broncos at the NOJOQUI FALLS FUN RUN 2022. Some of these reimagined Broncos can cost well over $200,000, but that hasn’t slowed the Bronco market down a bit. Perhaps you’ve got a dusty Bronco in an old barn somewhere? 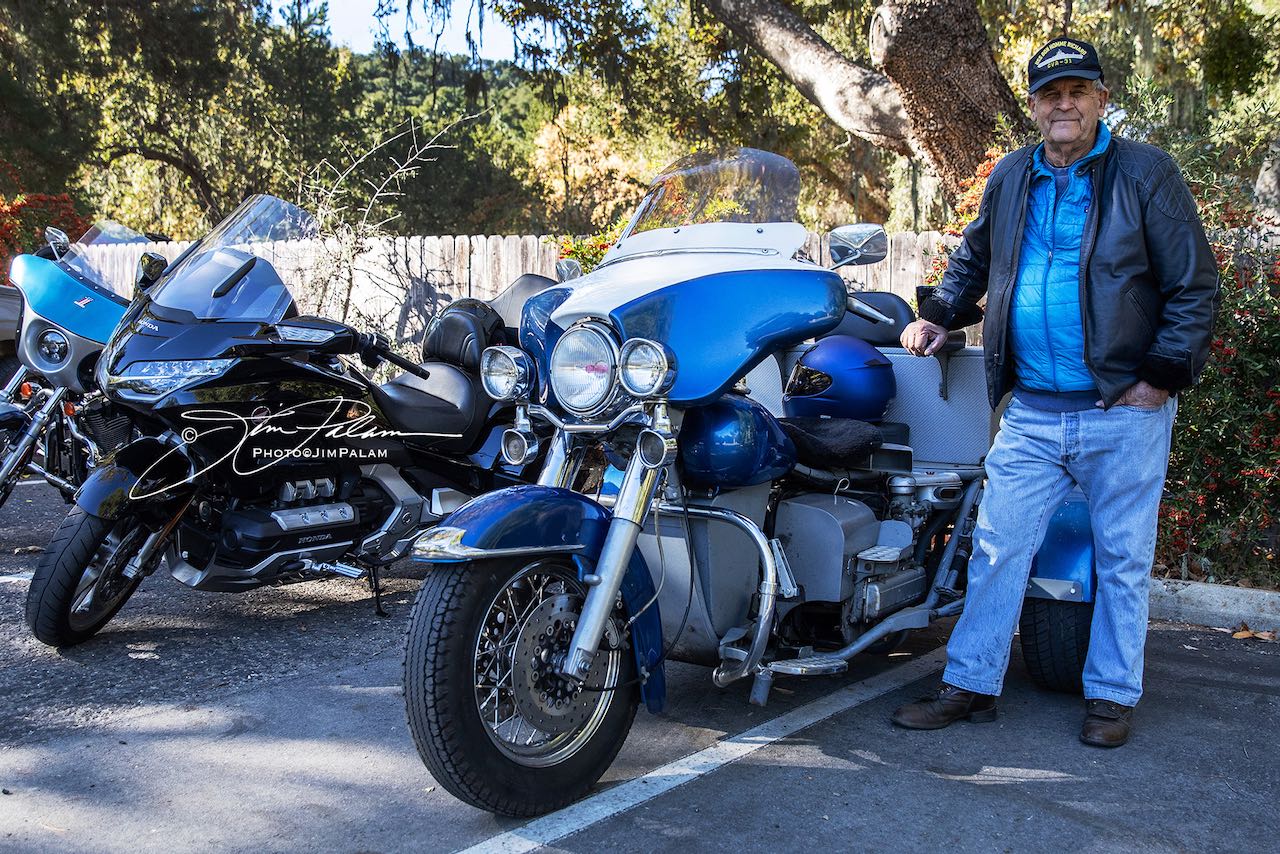 There were only two motorcycles at the NOJOQUI FALLS FUN RUN 2022. I found three more and Paul MacLaren out in a parking lot. Paul is affable, sturdy and 83 years young. He built his Corvair powered Harley trike, which he rode 70 miles in 40-degree, overcast weather to get to the show. Meeting ageless motorheads like Paul is one of the big draws for me to attend car shows and motorsports events. No matter our age or backgrounds, we all share a love for style and engineering – and the freedom our cherished rides give us to cruise, race, and escape the mundane. Vroom-vroom!