Both Steve Miller (Band) and Dan Gurney had chart-topping Eagles, but IN DETAIL: FLY LIKE AN EAGLE! zooms in on Dan Gurney’s AAR, the only constructor in the US to design and build winning F1, Indy 500 and sports car Eagles. 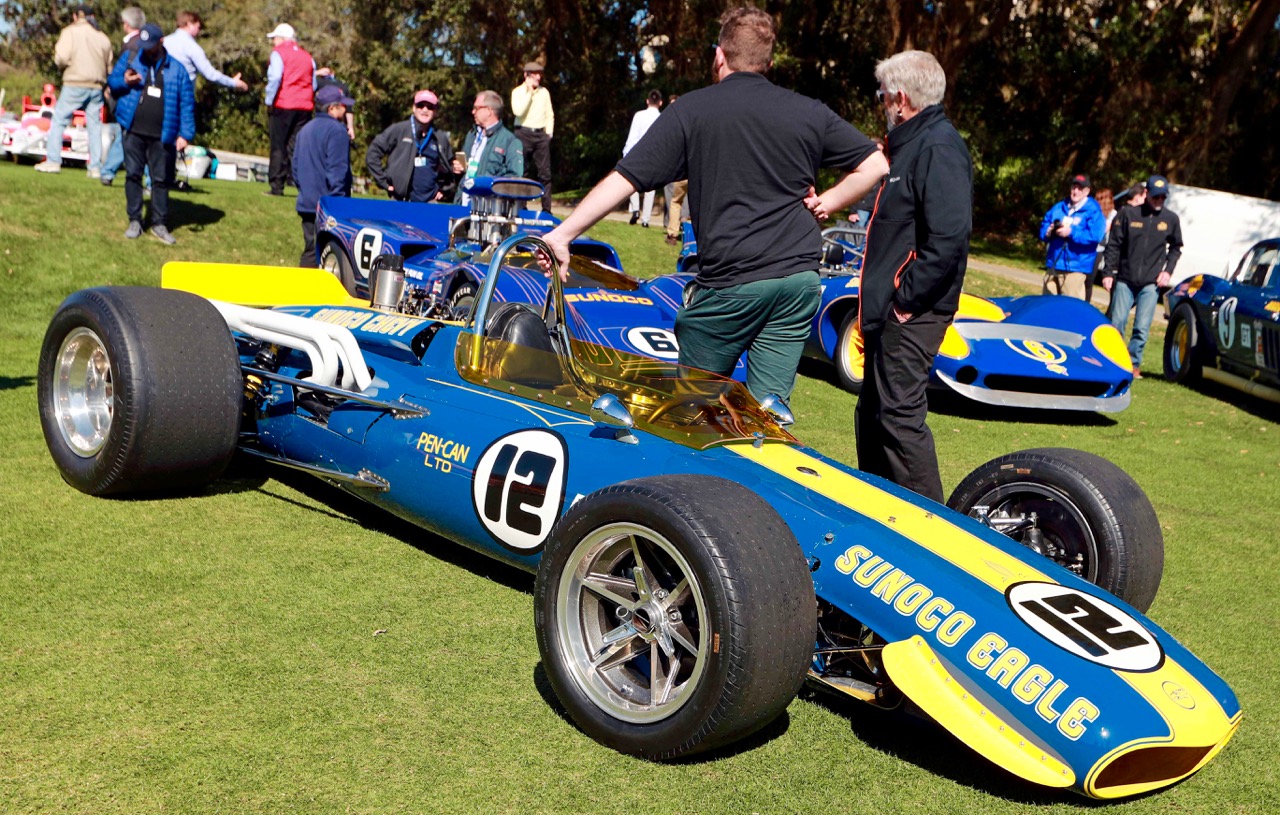 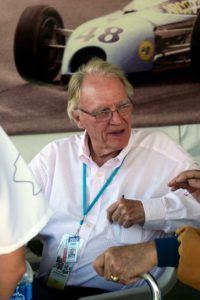 For our second installment of “In Detail”, we  look at a pair of Eagles from the Amelia Island Concours d’Elegance (AICE), up close and personal. These came from All American Racers (AAR), established by Dan Gurney who made many contributions to racing as a driver, owner, constructor and constant innovator.

Brit Tony Southgate penned the 1968 Indy Eagle, known as the Mark 4. The car was successful as Eagles finished first, second and fourth powered by three different powerplants in the 1968 Indy 500. Bobby Unser won with a turbo Offy, Gurney himself came home second with a Ford-Weslake engine and Denis Hulme was fourth, his car powered by a DOHC Ford V8.This shot is from the 2010 Rolex Monterey Motorsports Reunion (RMMR) where Dan Gurney, left, so deservedly served as the event’s honoree, one of only two individuals to be so honored (the other being Juan Manuel Fangio). He spent the weekend as both the honoree and an ambassador for the sport. He greeted countless throngs of well-wishers in a soft-spoken manner; always with a smile. 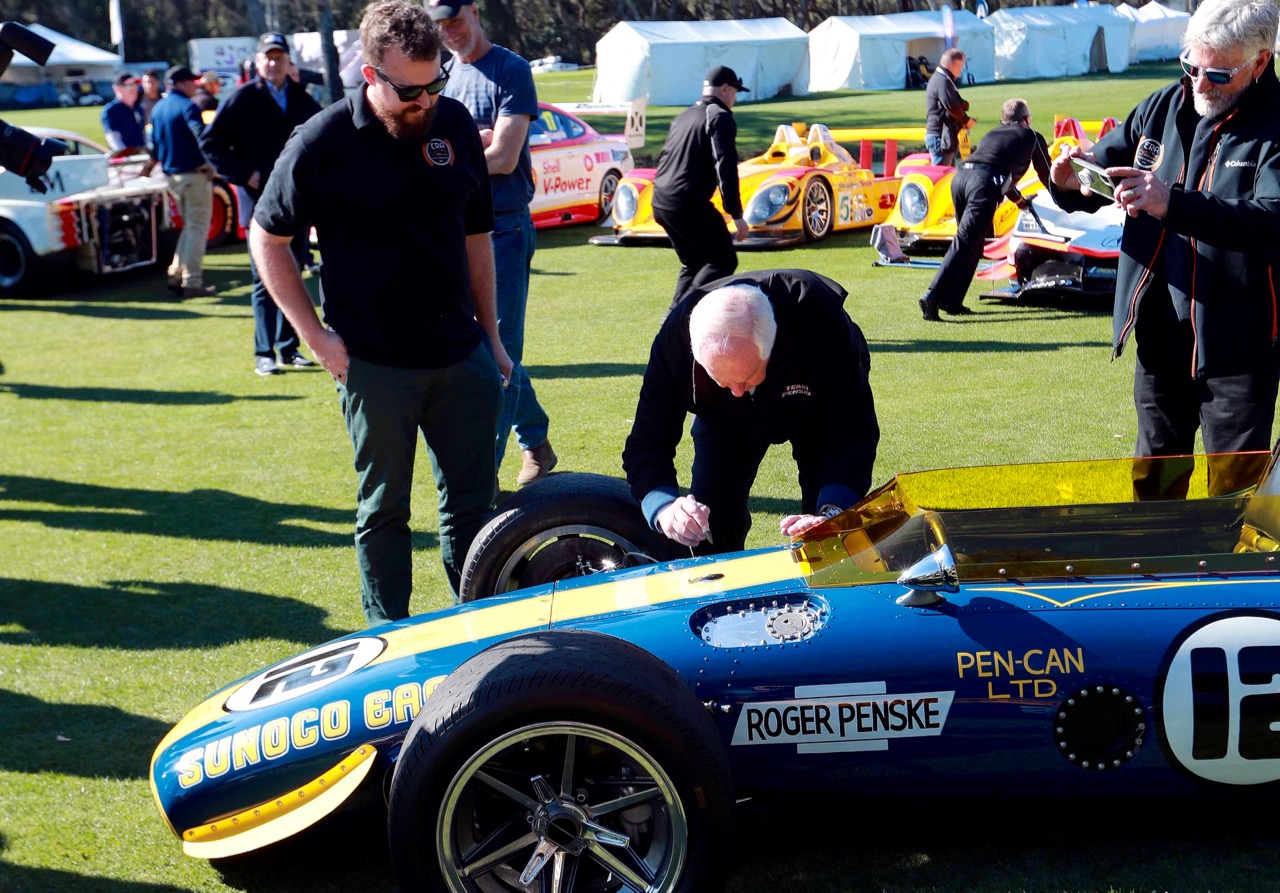 Roger Penske purchased a Mark 4 as his first USAC entry. The intent was to test the waters before making a full-on assault of the Indy car ranks. Here he signs the car at the AICE, now owned by The Allegra Collection. Team Penske did not keep the car long, only two races and an Indianapolis test session, but it showed they could compete. Eighteen Indy victories would say they came to the right conclusion! 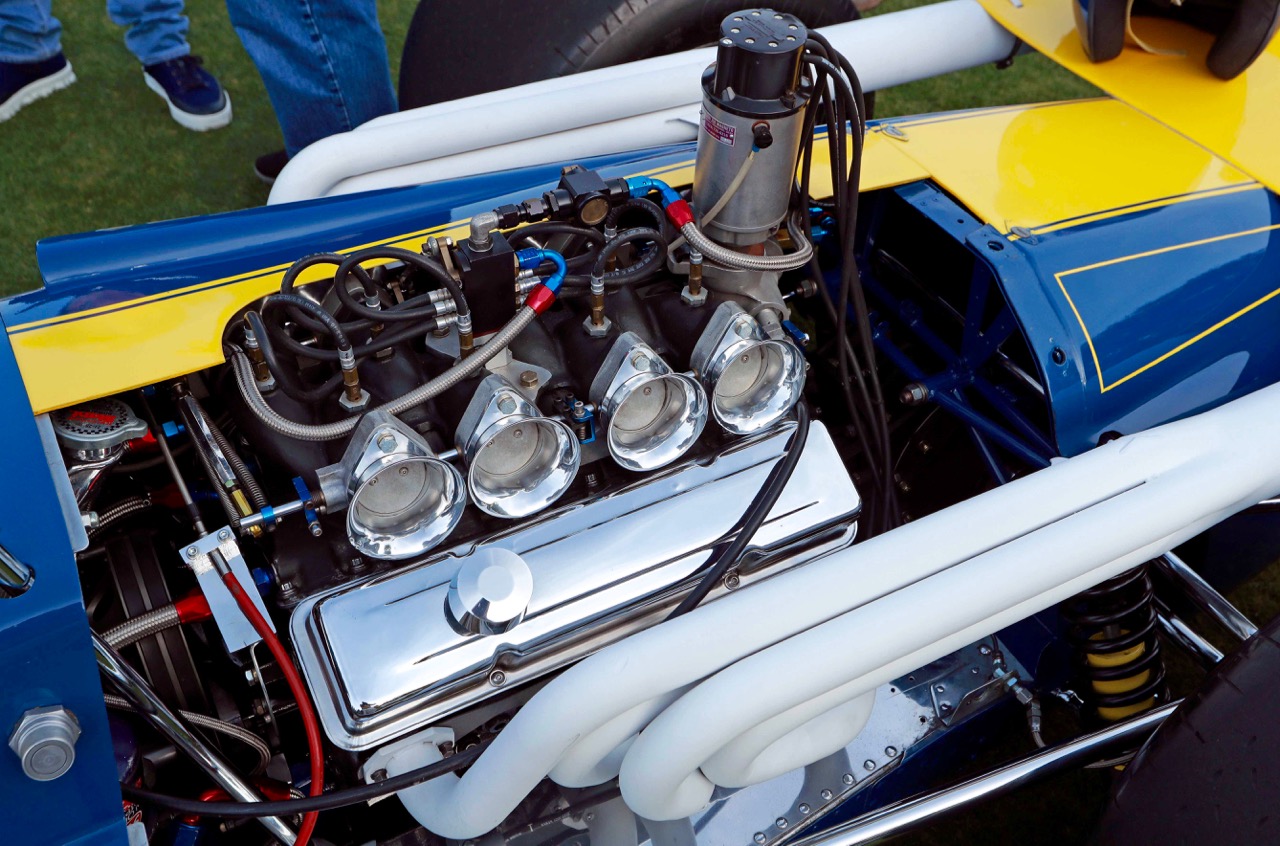 Penske chose to go with Chevy stock block power, running on gasoline to stay in his comfort zone. This Vertex magneto-sparked small-block sports fuel injection. He was running Chevy small-blocks in other series and knew the engine well. Besides, his primary sponsor at the time, oil company Sunoco, did not make methanol! 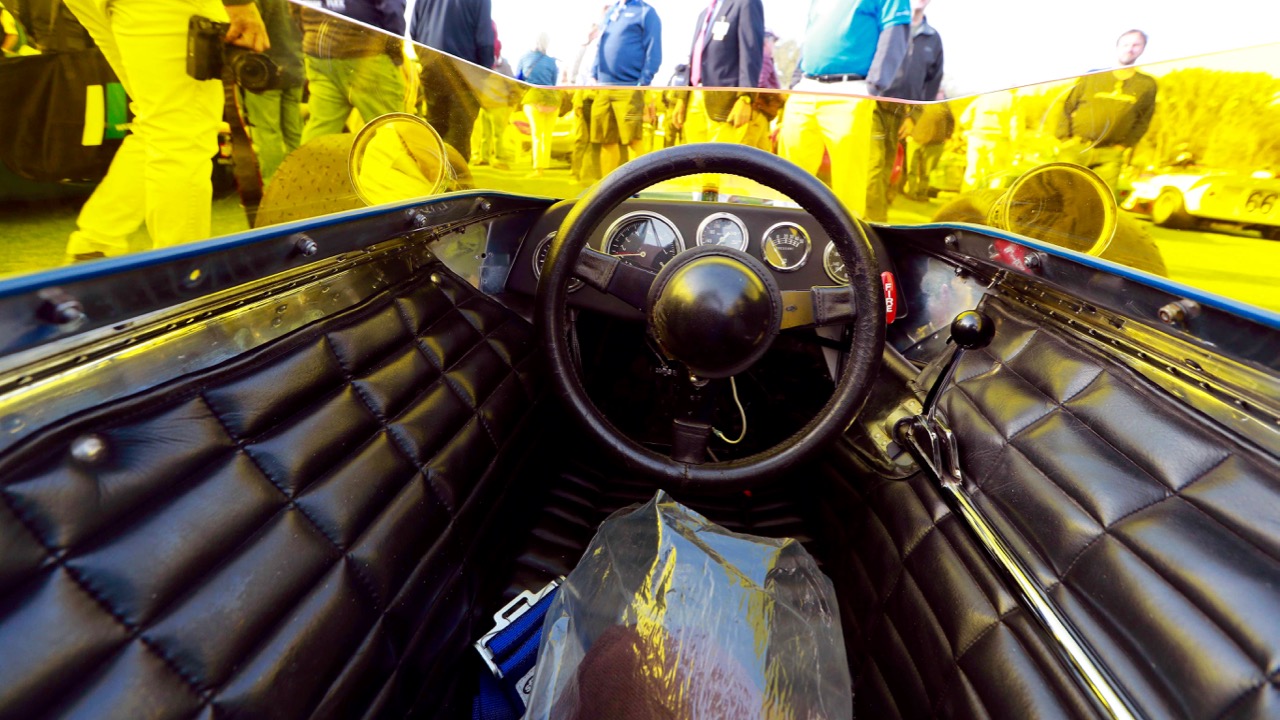 From this perch, Mark Donohue drove the car in its maiden Penske outing at Mosport, finishing fifth. At the final round in Riverside with the engine now converted to methanol, he challenged Dan Gurney in the factory Eagle before succumbing to a broken suspension component. 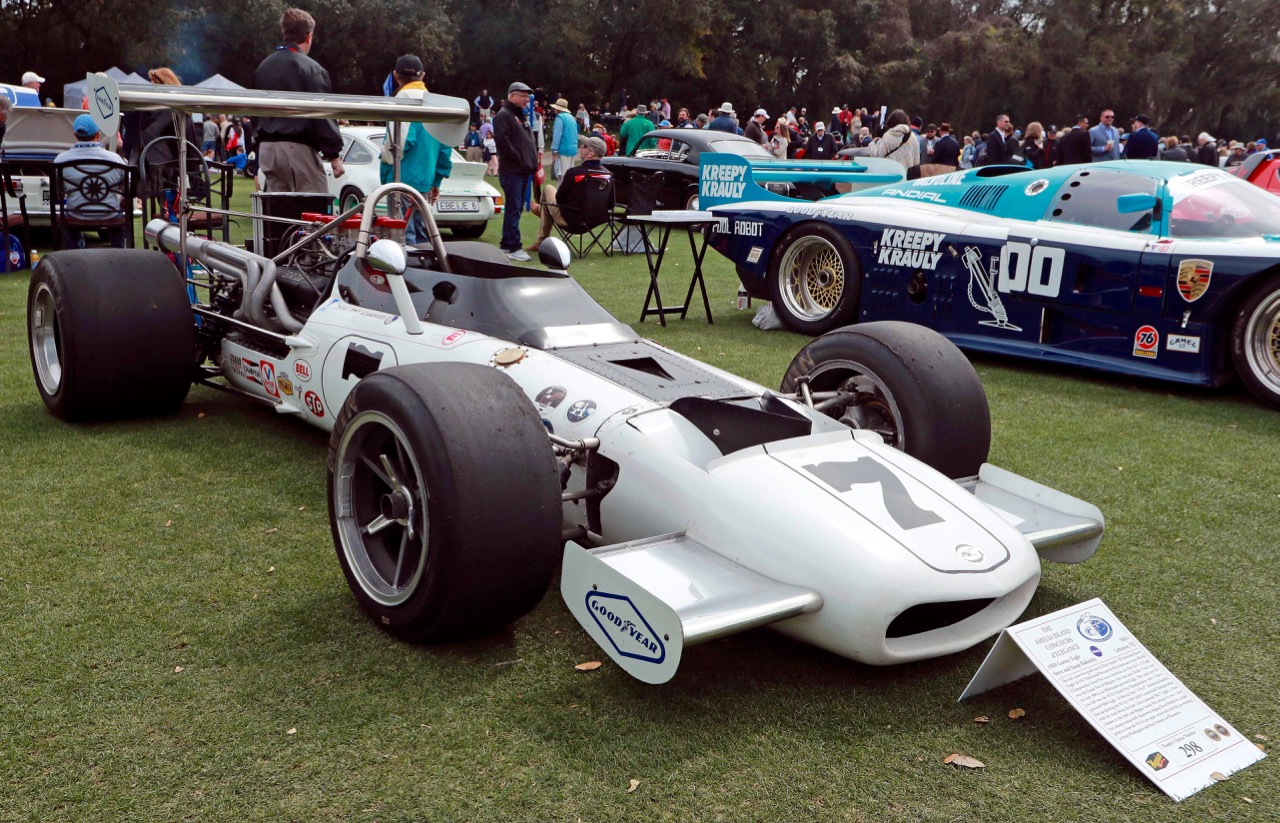 A close cousin to the Indy focused Mark 4 was the F5000 version called the Mark 5, also a Southgate design. Differences included the materials used in construction that differed by sanctioning body – USAC and SCCA. 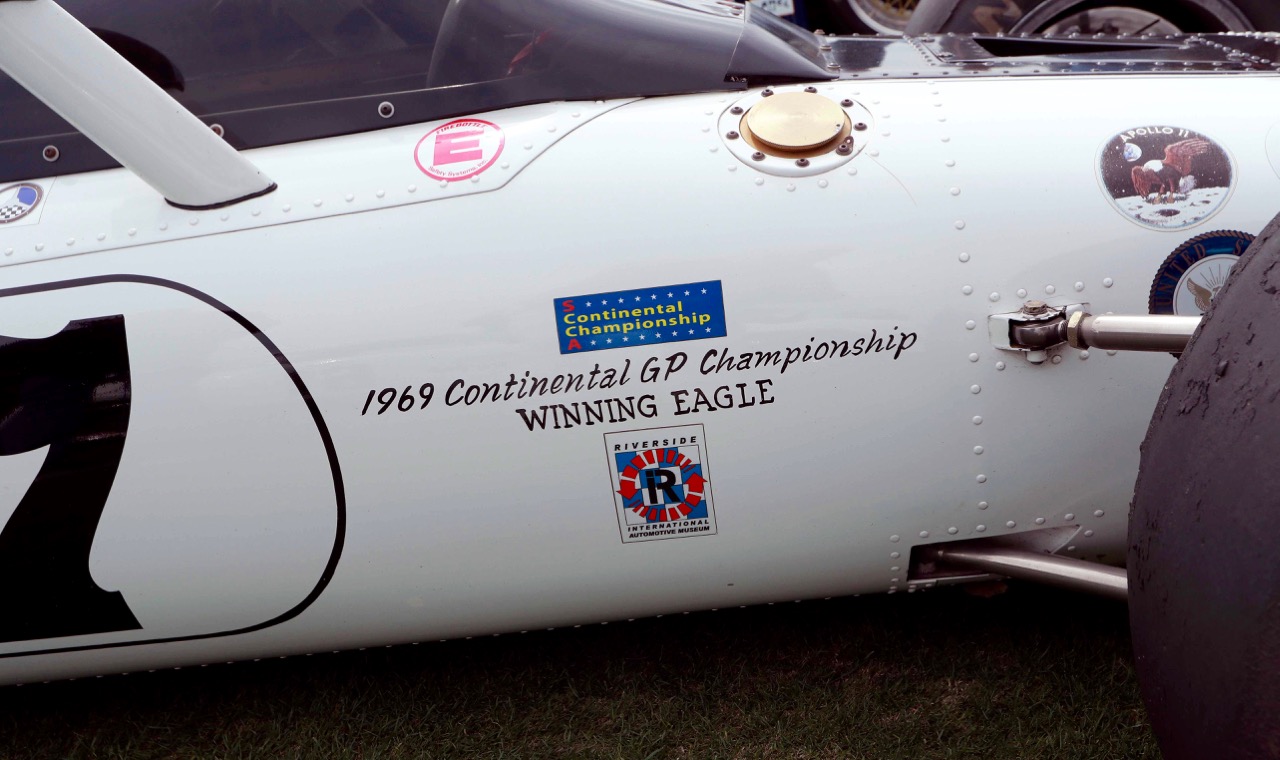 Dr Lou Sell clinched the 1968 Formula Continental championship in an Eagle Mark 5, with Tony Adamowicz (AKA Tony A-to-Z) taking the honors in 1969 in a similar car. This is the 1969 series winner as shown at the AICE by Susan & Steve Babinsky. They deservedly won an Amelia Award for the car’s impressive presentation. 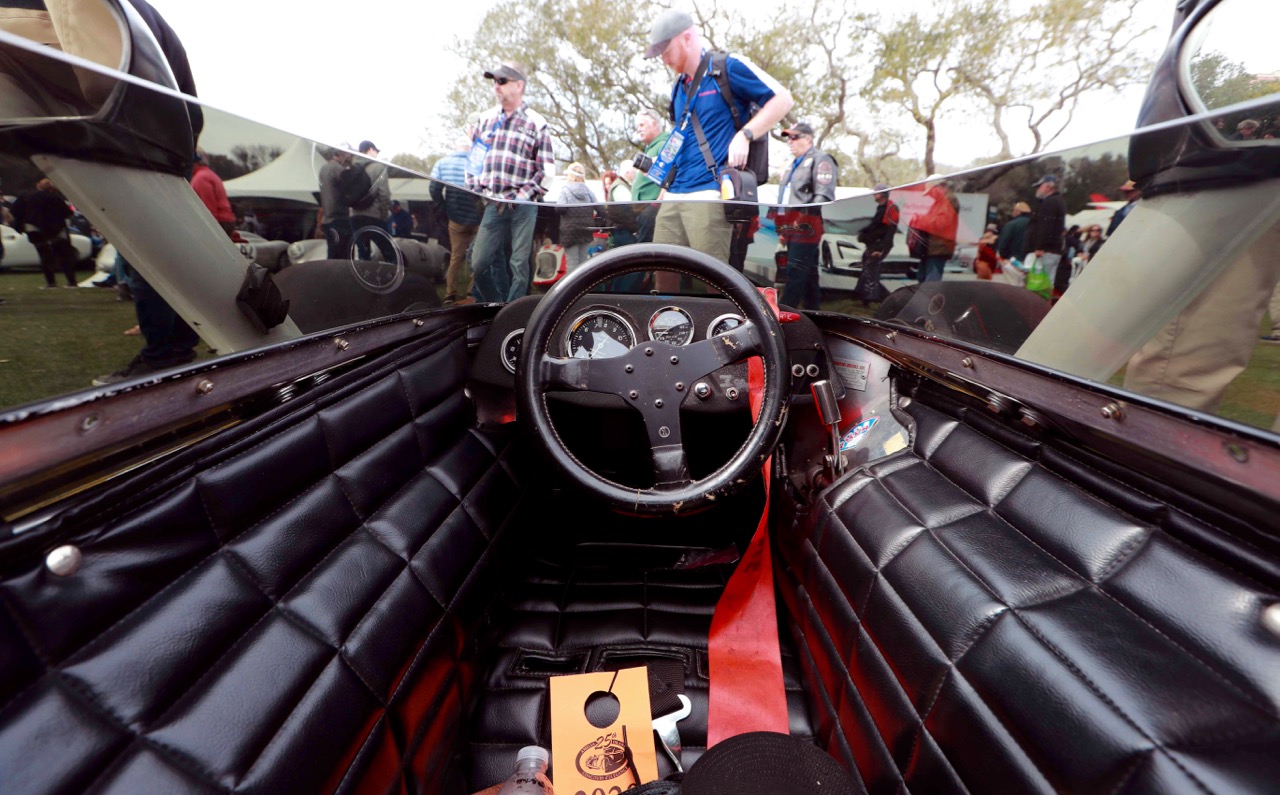 The cockpits of the Mark 4 & 5 do not appear much different. The driver sits in a reclined position with their arms and legs stretched out ahead of them. Eye level is below a standing person’s waist. The view to the rear is limited to two small stalk-mounted mirrors. Beneath those quilted covers sat copious amounts of fuel. It was not a place for the faint of heart! 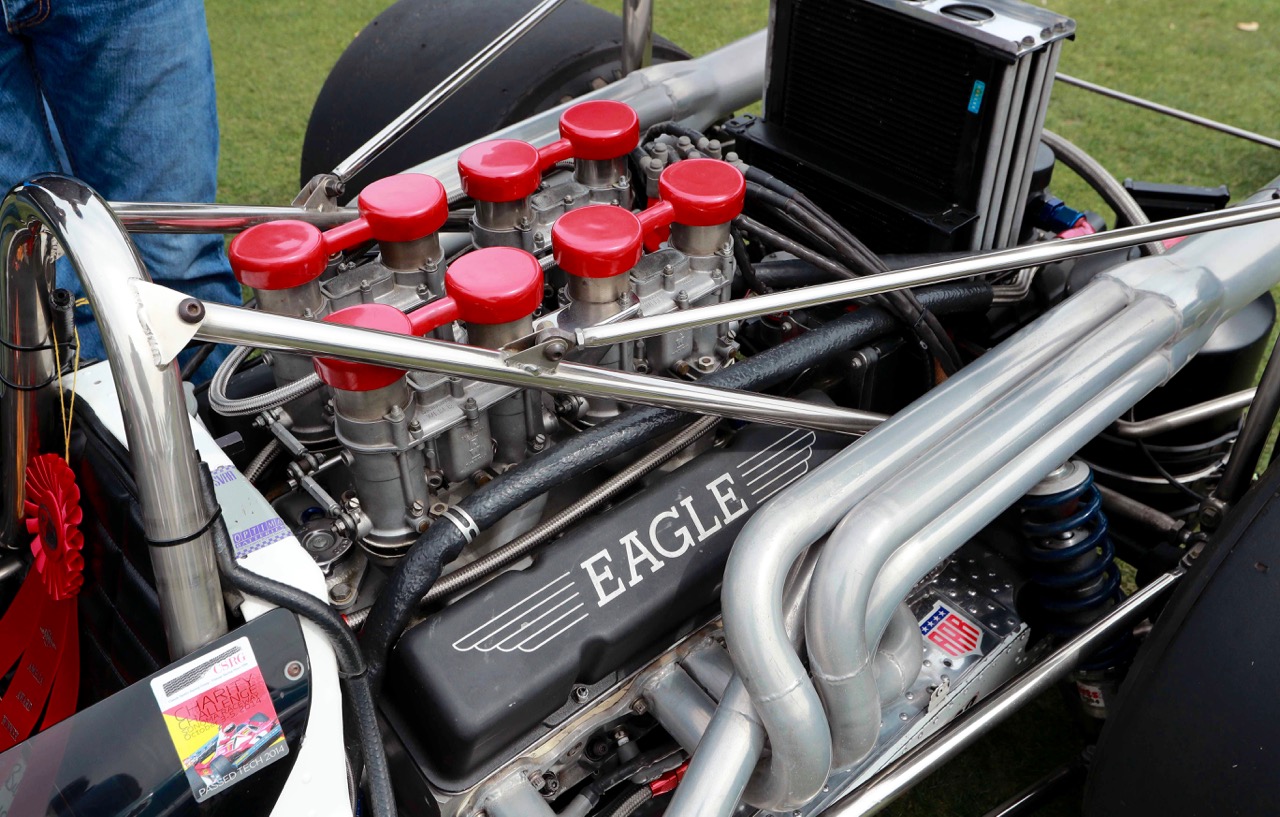 The Penske Mark 4 and Adamowicz Mark 5 both rely on Chevrolet small- block power. In the case of the F5000 car, it features Weber carburetors and a distributor ignition in place of Penske’s choice of fuel injection and magneto ignition for the Indy car. The headers look similar and must have emitted a fearful racket. 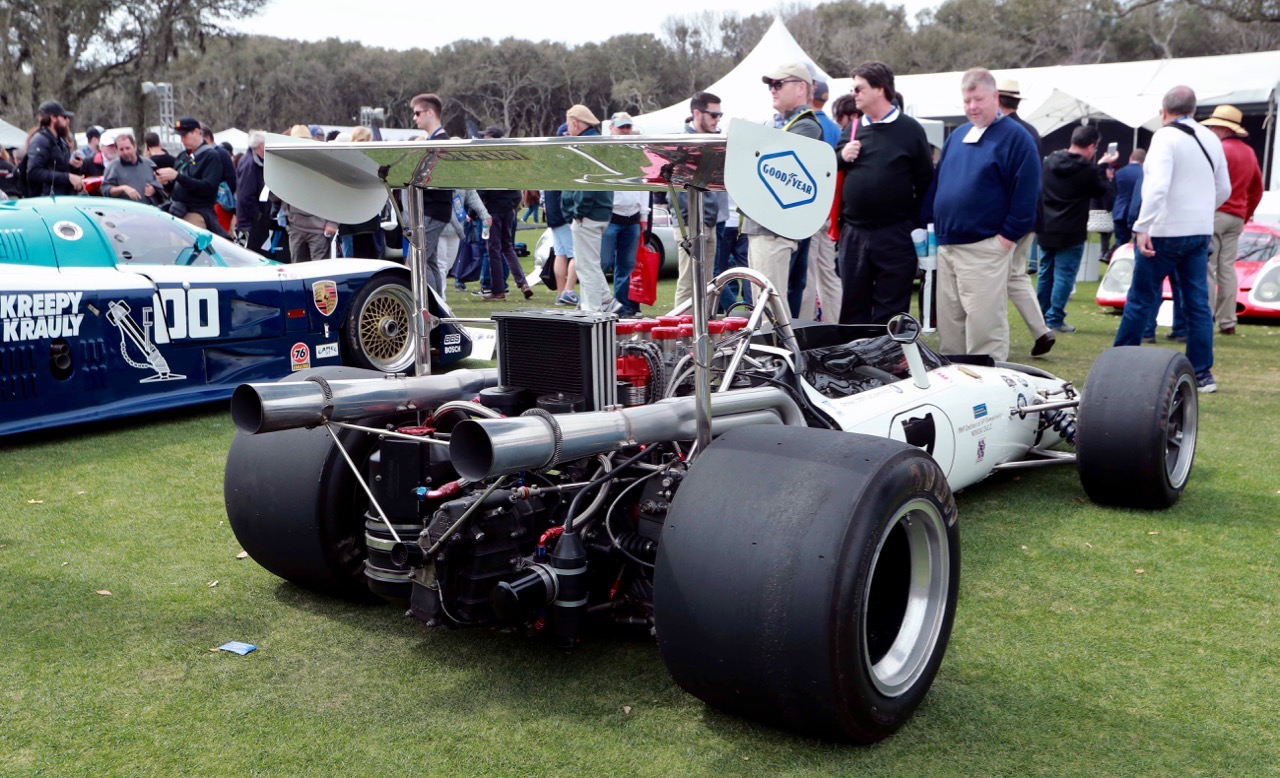 A one-year-only feature for 1969 was a high mounted, adjustable wing feeding its downforce directly onto the rear uprights. Those rear wheels measure 16×15. From this shot, you can see aerodynamics were still in their early stages with most of the mechanicals exposed to the air stream. Later, fully enveloping bodies with countless vents, scoops and aids would come into place on all racecars. 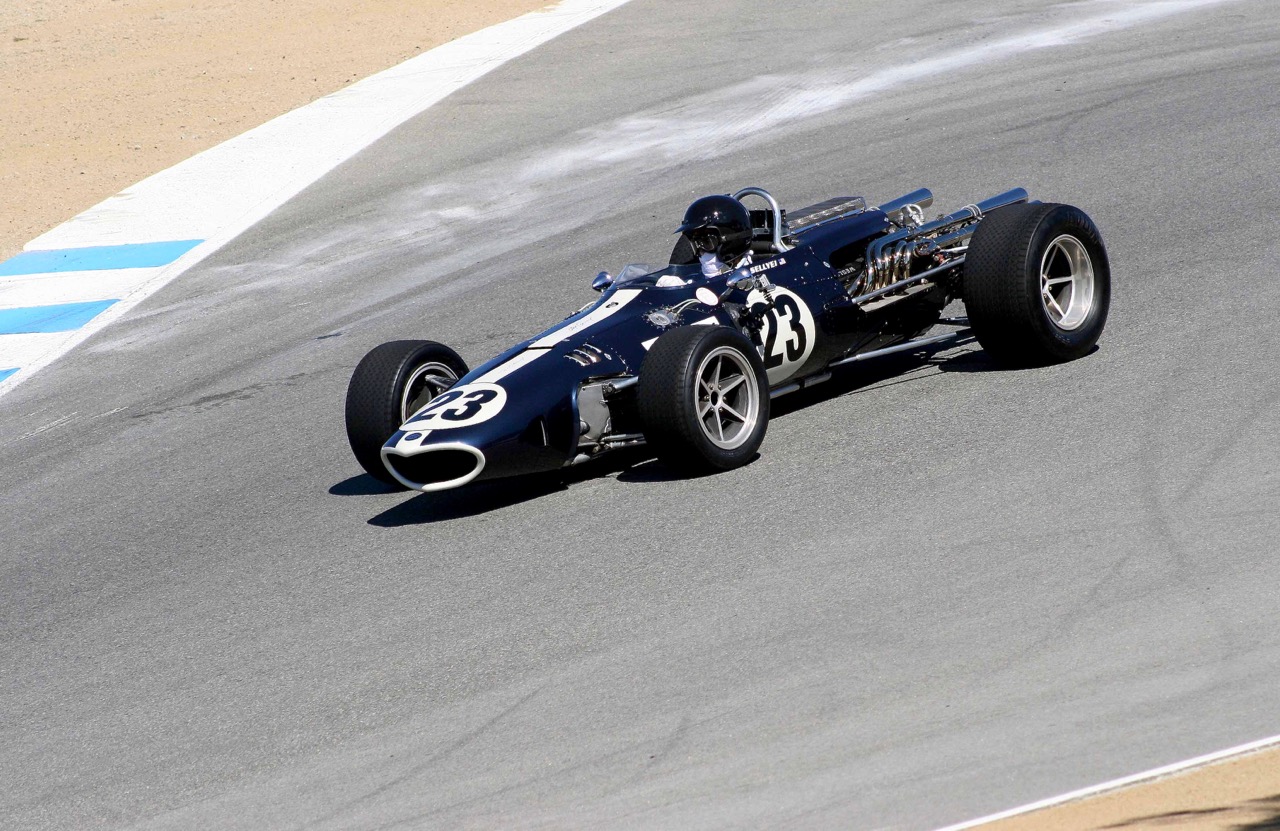 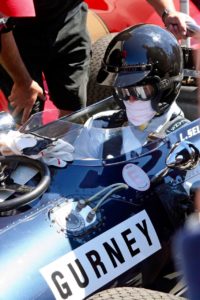 Dan Gurney was not the only Gurney in attendance at the RMMR in 2010. His youngest son, Alex, was also there. Alex is a successful racer in his own right, having won the Rolex Sports Car series Daytona Prototype Championship, not once, but twice. At Monterey, he reprised his father’s role, above, driving the first of the V12-powered Eagles (chassis # 102). The first and only time an American would win an F1 race in a car of his own construction. Alex, right, would later play his Father in the film, Ford v Ferrari. Reports at the time said that the 2010 RMMR was the first time Alex had driven one of his Dad’s cars. Here we catch him beginning his descent into Laguna Seca’s famed “Corkscrew”.

For more information about the AICE, please visit  https://www.ameliaconcours.org/