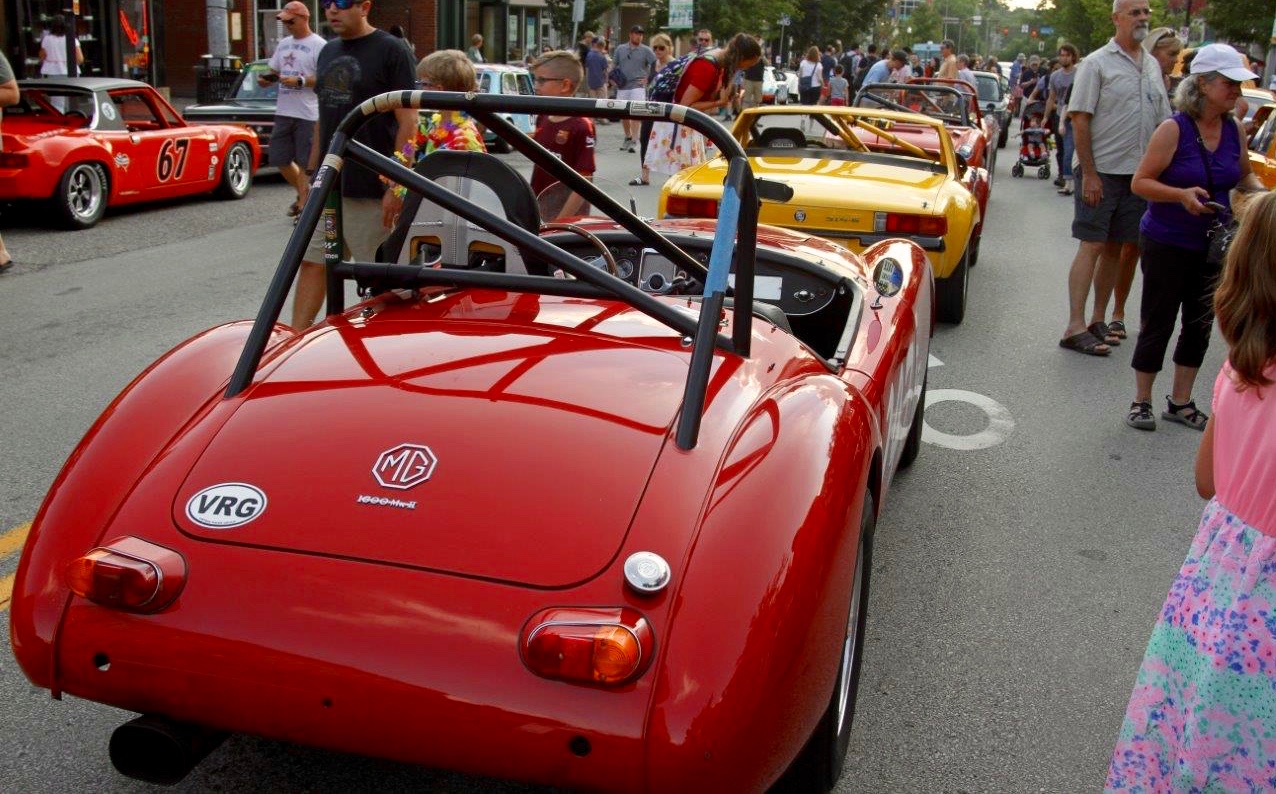 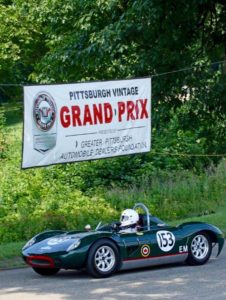 On Labor Day 1983, a group of enthusiasts brought their dream to fruition by staging a vintage race through the streets of Schenley Park in downtown Pittsburgh. Thirty-five years later it has grown to incorporate two race weekends with a dizzying array of car events stretched out in between.

One of those events is Friday night’s Forbes Avenue of Speed, above. Under a most generous police escort provided by Pittsburgh’s finest, racecars run through surface streets from the Paddock to a closed-off section of Forbes Avenue. There drivers enjoy a welcoming reception hosted by Orr Jewelers while throngs of families wander through racers lining both sides of the street. For many, it’s their first chance to get up-close and personal with vintage racing. This is how you make fans and friends. 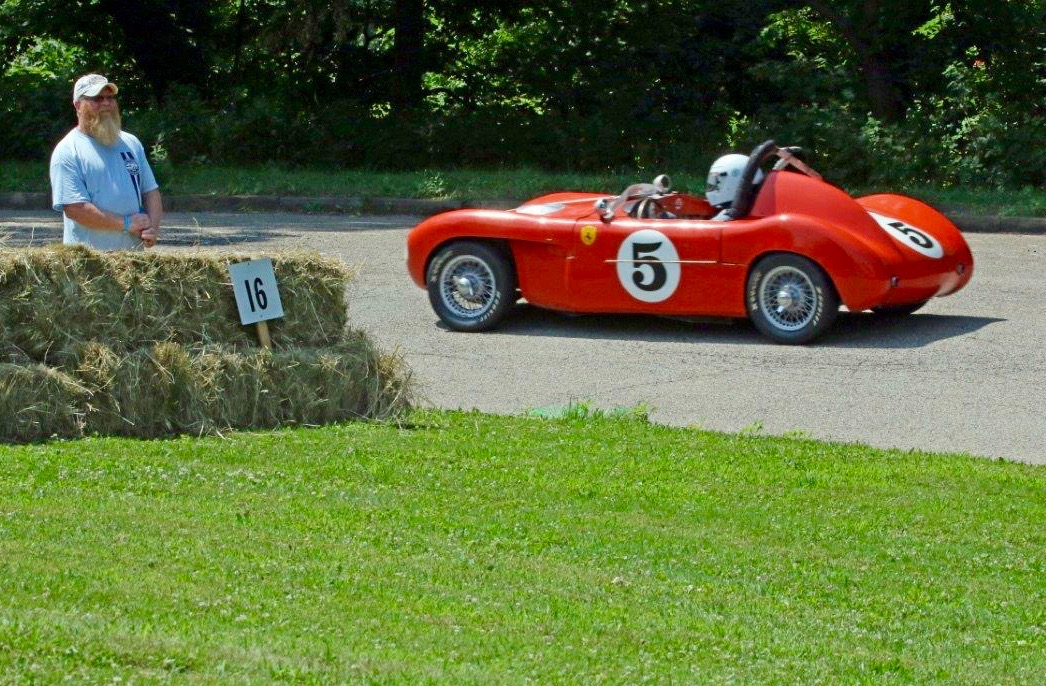 The sheer size of the operation is mind-boggling, and perhaps even more so when you realize just about everyone you see is a volunteer. Some 1,400 return year after year to toil in all kinds of weather. They build a circuit and show field, then tear it all back down in short order. Their reward is in being part of one of the most fun vintage races anywhere. Here a Turn 16 corner worker keep a close eye on Paul Wilson’s Jabro. 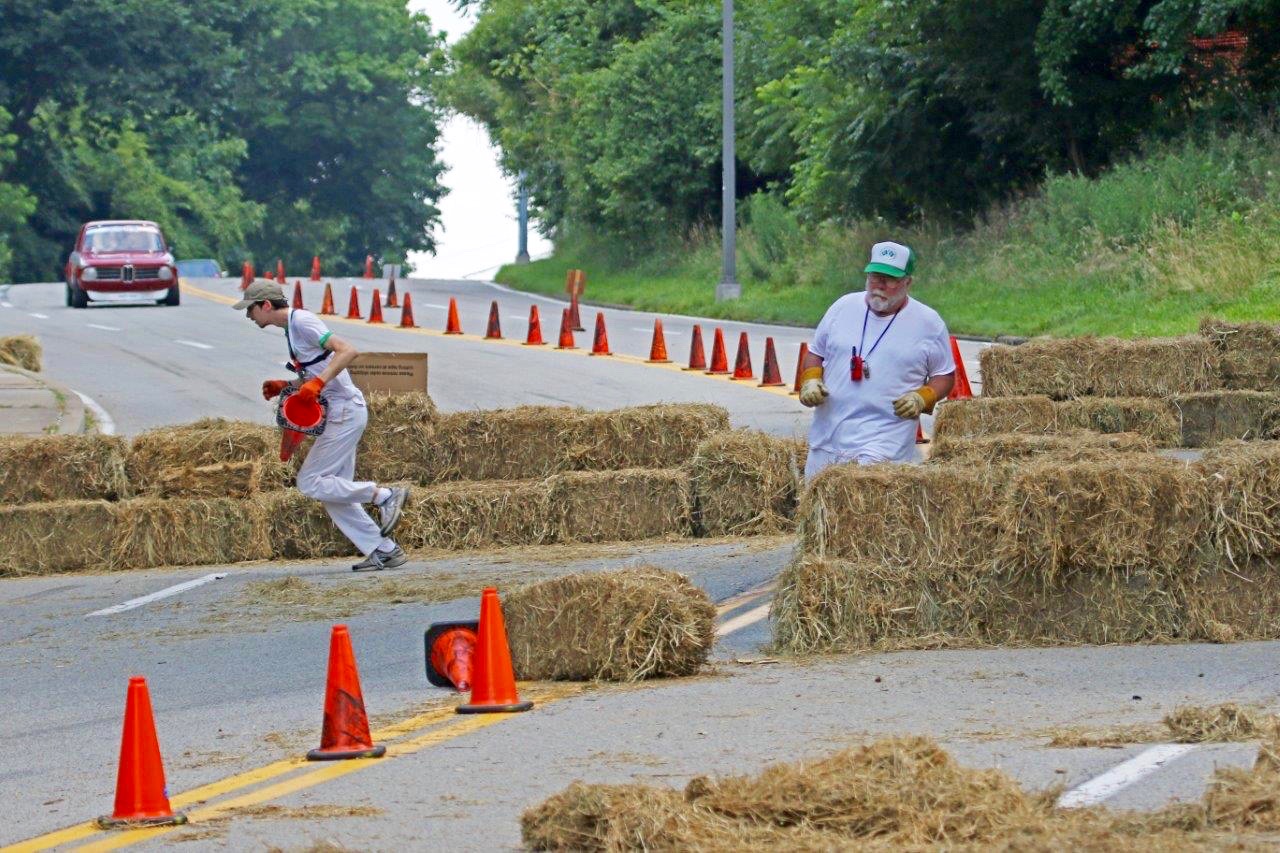 Speaking of corner workers, one scene we return to witness every year involves the haybale chicane on the back straight. (It’s really not straight, just less curved than the rest of the circuit). Racers continually abuse the chicane. As workers scurry to repair the damage, hauling haybales and cones along with them, racecars bear down on them. It is definitely not a station for the faint of heart, yet crewmembers return each year. 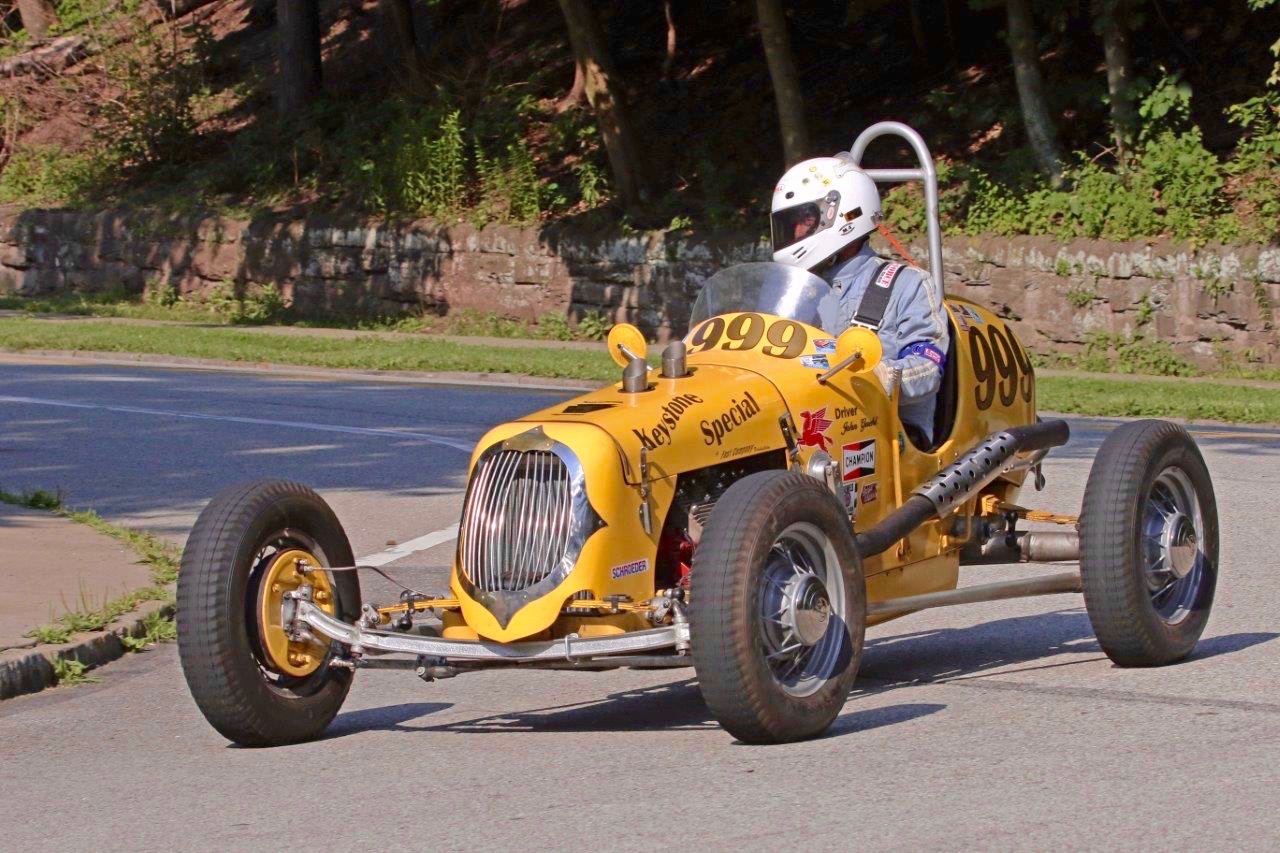 American racing can trace some of its roots to a thousand dirt bullrings spread out across the country. Here drivers raced machines they constructed themselves from what they had on hand. John Guehl’s sprint car sports a ’40 Ford front end, ’39 Mercury engine and trans, with ’36 Ford wheels and a ’48 Ford rear end. Outside of an electric cooling fan and a Corvette master cylinder, it is exactly as raced in period. 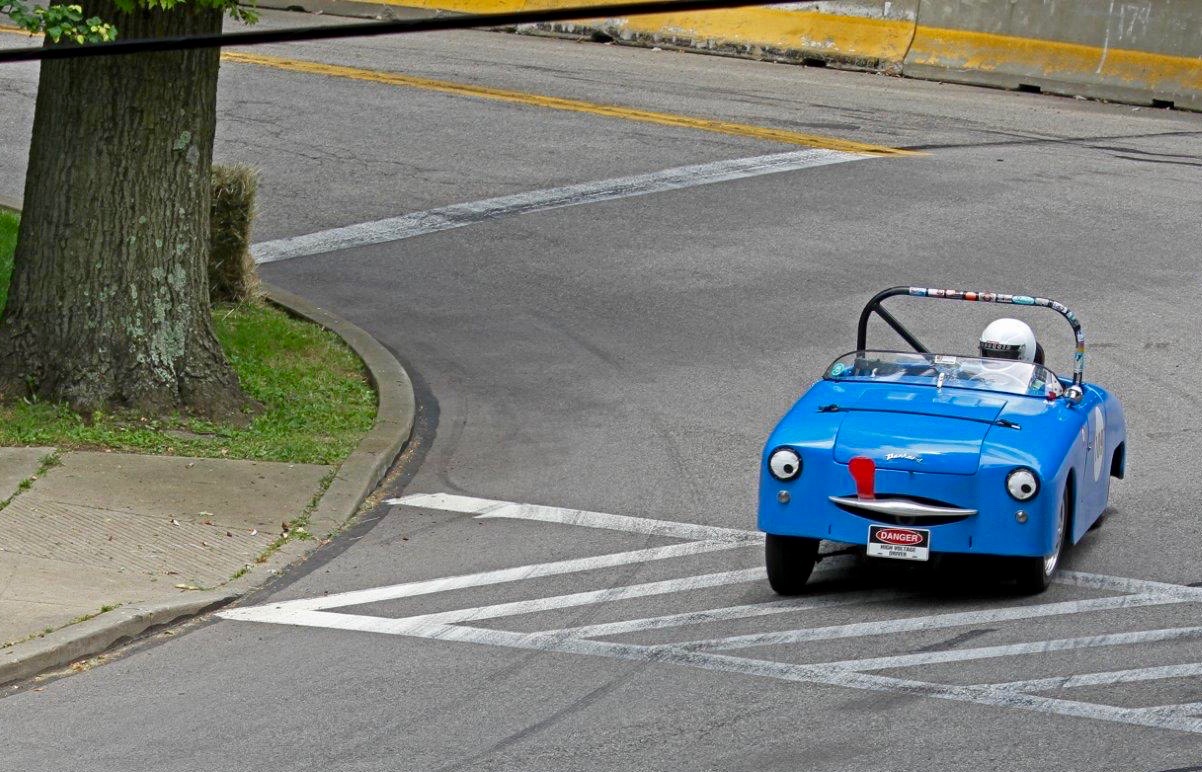 This ‘55 Panhard Dyna Jr. sports a V8 vegetable juice can fixed to its air cleaner. When asked why, owner/driver Robert Deull says, “so I can tell people it has a V8 in it!” In actuality, power comes from a flat twin. Looking at the countenance of Deull’s car, one gets a further glimpse into his sense of humor!

Long time racer Dave Nicholas and his stead “Honeybee” drove Schenley Park for the first time. He was impressed and perplexed at the same time. He commented that in some places, the track behaved like a racetrack, but in others, it was like nothing he had ever seen. Constant changes in elevation, lighting and surfaces combined with numerous common road hazards tax driver and machine alike. It is a place where local knowledge goes a long way. Nicholas was quick to point out the help be received from long time PVGP competitors, George Vaapa and Charlie Dolan. 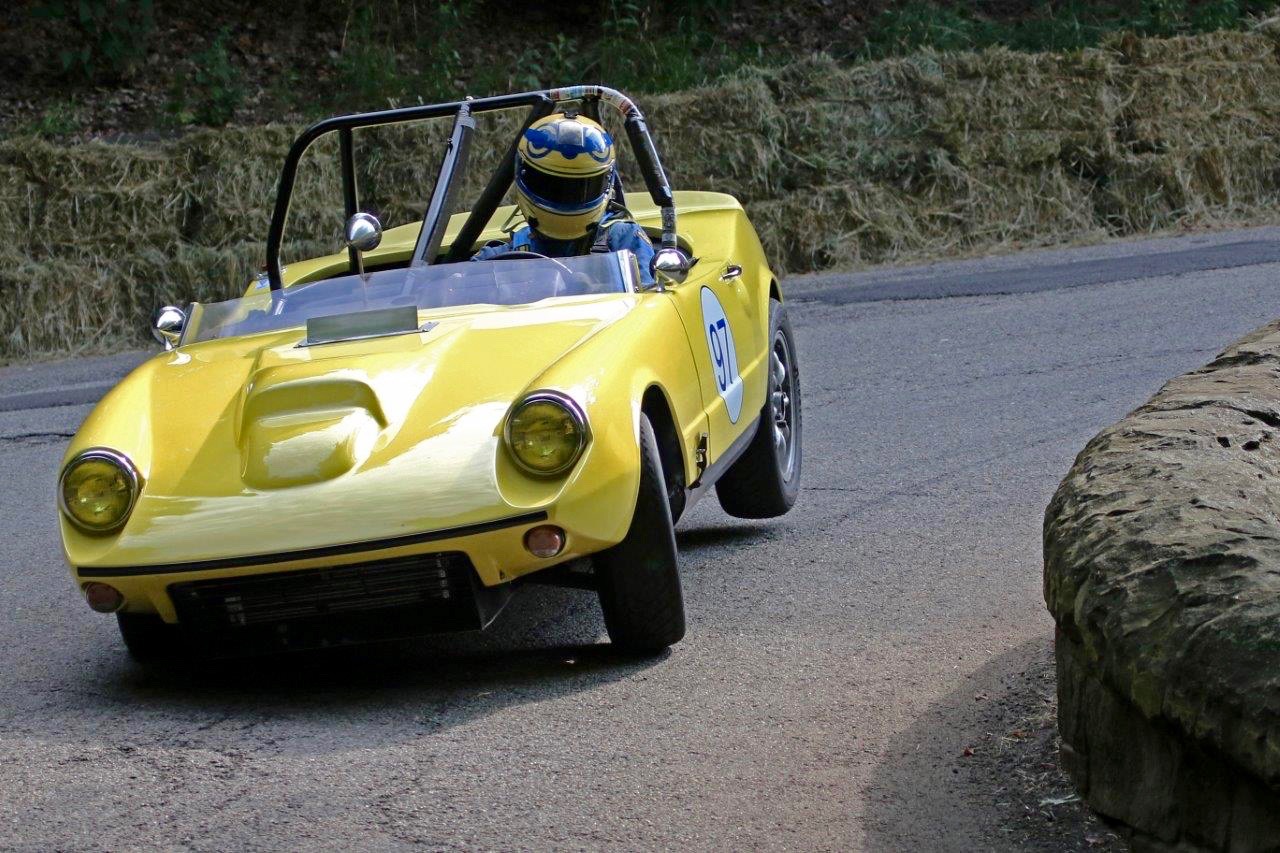 This shot of Stefan Vaapa in his SAAB Sonett will give you an even better idea of what we are discussing here. The Sonett contorts itself as Stefan pushes through Turn 19. To one side is a stone wall, to the other haybales lining an embankment, while the duo deals with crowned, imperfect city streets. The margin for error is preciously small. 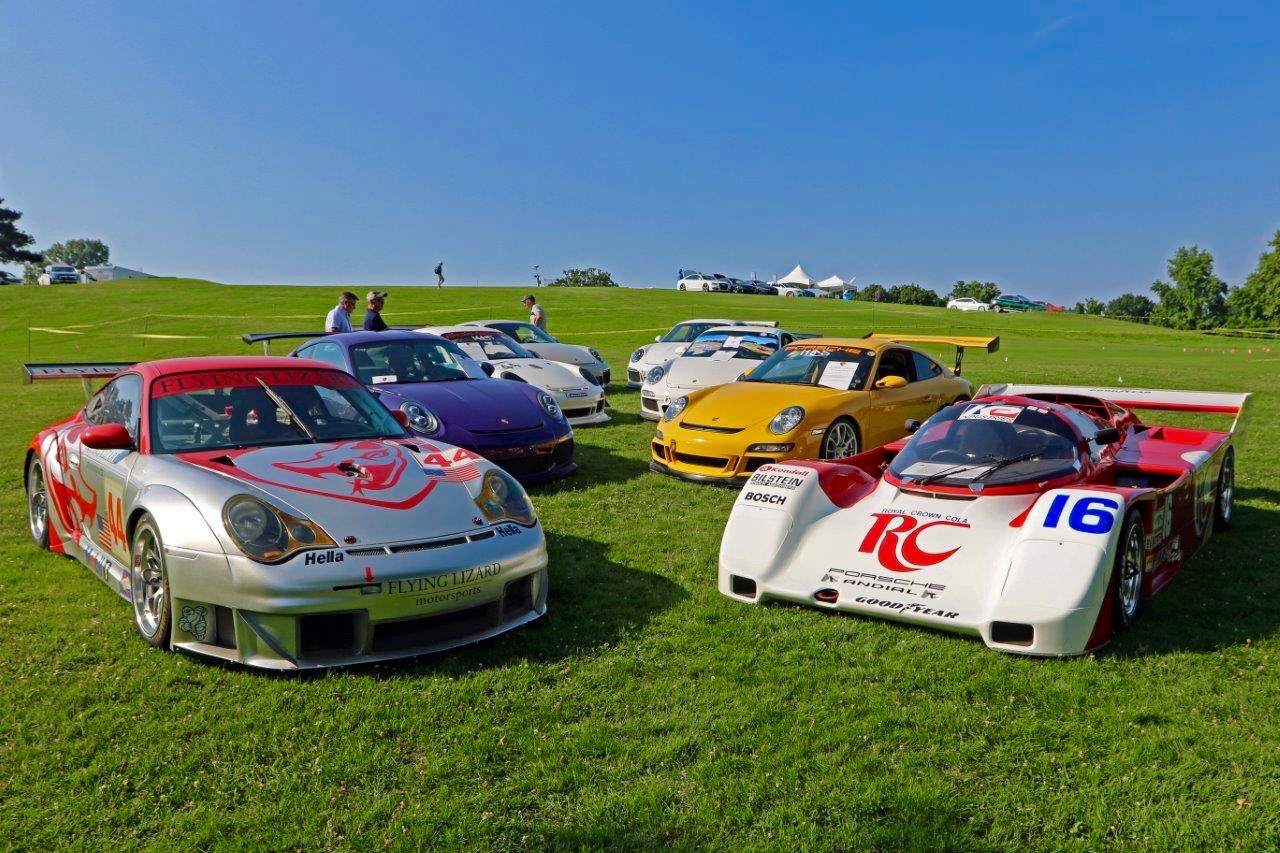 If one tires of the dizzying array of racecars on track, immediately adjacent is an extensive car show along the Bob O’Connor Golf Course. Grouped by country of origin, there is something to suit every taste. Just behind Turn 13 lies German Hill with eye candy from all manners of German marques new and old. The Porsche contingent gathered a collection of newer racers: Flying Lizard GT3RSR and a Dyson 962. Both cars have extensive, and successful race histories. 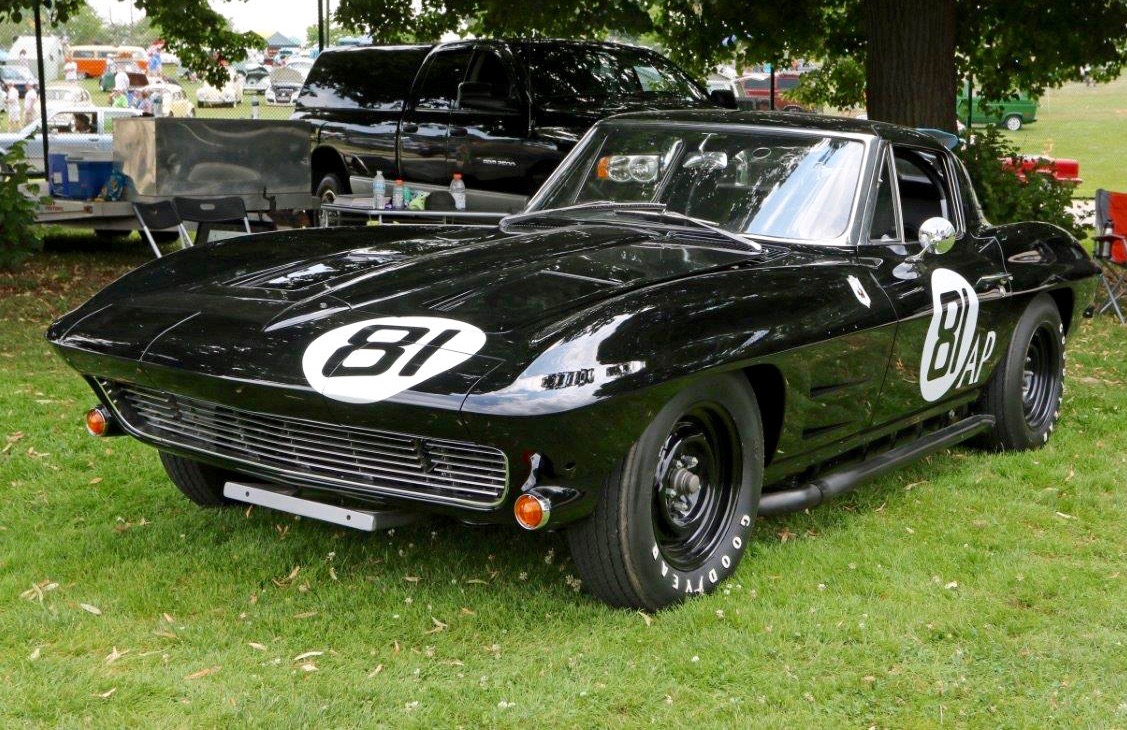 Talk about the Holy Grail of Corvettes – this one is a ‘63 Z06, “Tanker”. Originally campaigned by Al Forsyth of Forsyth Chevrolet in nearby Homestead, PA, it represented GM’s hope to dominate SCCA production class racing. Unfortunately, their timing was just a bit off as they ran headlong into something called a Cobra. This car has received an extensive restoration back to its as-raced condition and was presented with a binder full of documentation. 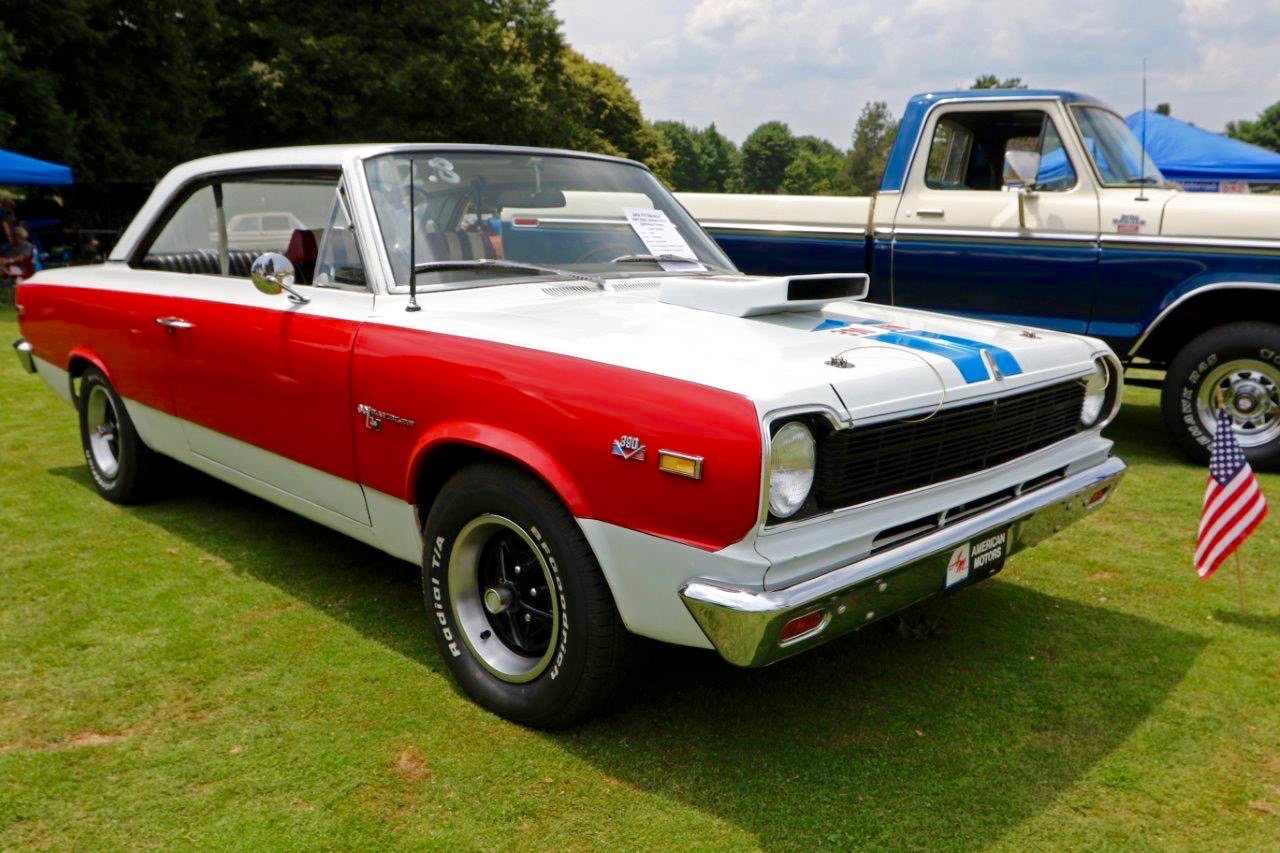 The debate is on as to who built the fastest Muscle Cars of the era, but who built the most flamboyant may not be up for discussion. AMC was a latecomer to the party but made up for it when they created the Hurst SC/Rambler. It followed the tried and true Muscle Car formula by stuffing a big engine into a little car but went a step further by cloaking the car in a tri-color paint scheme. They furthered their muscle car ways by adding a prominent hood scoop. Bob McClurg tells the story of AMC performance very ably in his book The History of AMC Motorsports. 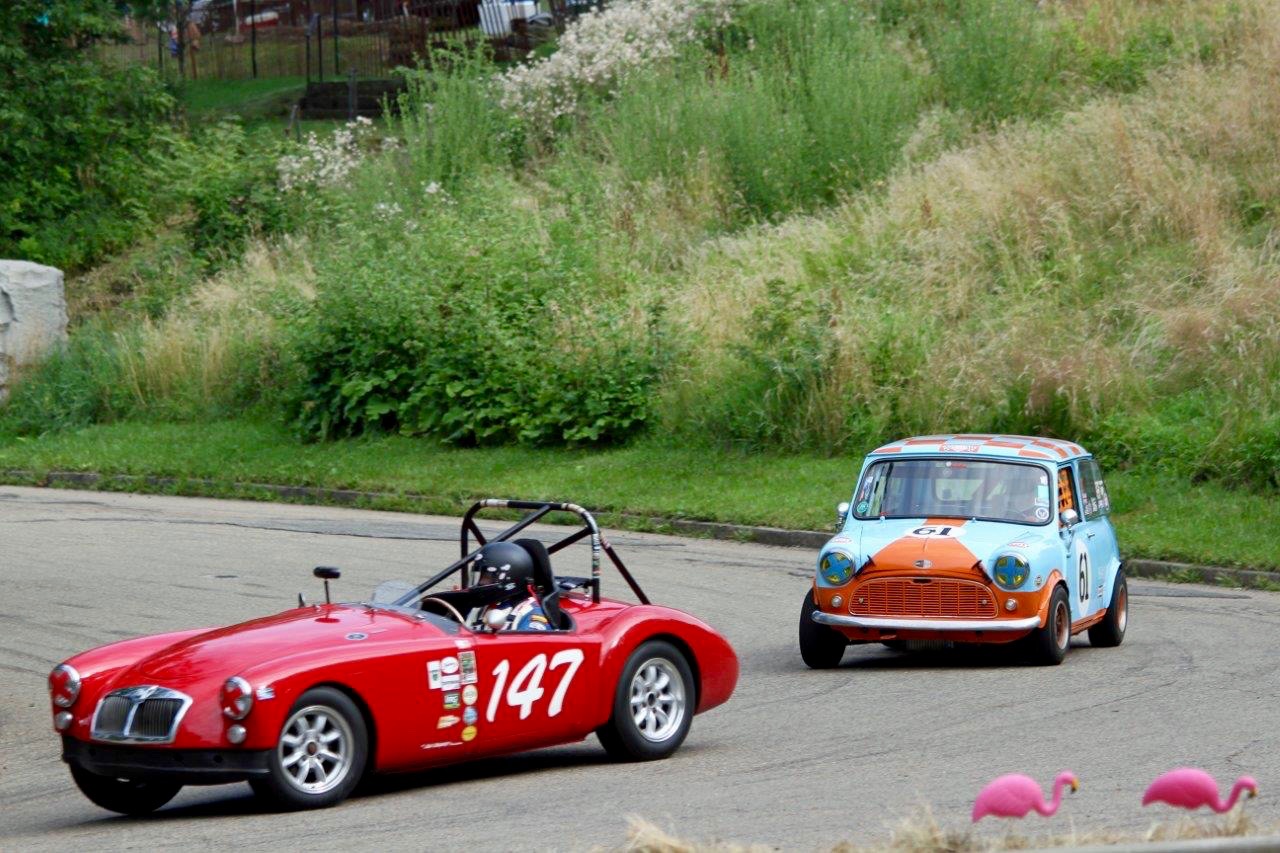 The PVGP has grown into a true automotive extravaganza with something for every taste. Plans are already taking shape for next year’s Celebration of the Automobile. Make your plans to attend. Kick-off is at Pitt Race Complex the weekend of July 12-14, 2019. Following a week of activity, things wrap up the next weekend with the car show and vintage races in Schenley Park. We’ll let Tom Dick (MGA # 147) and Bruce Whipple (Mini Cooper #61) say goodbye for us as they scoot through “Flamingo Gulch” past the pastoral park setting.