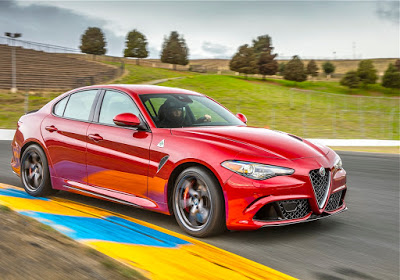 I love Alfas and own an ‘88 Alfa Romeo Milano Verde, the Quadrifoglio four-leaf clover-badged ancestor of the Giulia and its last rear-wheel-drive model until now. When Alfa Romeo left the U.S. in 1993, its only two models were an aging Spider and a sleek front-wheel-drive 164 Sport sedan. Neither was a ringing reminder of an Italian company whose legend included Grand Prix-winning racecars and powerful coupes that rivaled Ferrari. Enzo Ferrari was once Alfa’s race team manager.

But like a thunderstorm that delivers after hints with light and sound, the legendary Italian carmaker has returned. They first teased us in 2016 with the exotic 4C Spider baby supercar, and now with a honest-to-goodness sports sedan. The ‘17 Alfa Romeo Giulia Quadrifoglio is a jewel, and we test its facets.Alfa Romeo opted not to play games when it designed the new Giulia, so we didn’t either when we drove it.

The sedan sits on a new “Giorgio” rear-wheel-drive platform with a low center of gravity, which FCA chief designer Ralph Gilles told us was a “big deal.” The Giulia and Giulia Ti have a new 2-liter, direct-injection turbocharged aluminum 4-cylinder engine with 280 horsepower, plus rear-or all-wheel-drive – the claim is 60 mph in less than 5.1 seconds. Then there’s our Quadrifoglio’s 2.9-liter twin-turbo V-6 with 505-horsepower and 443 pound-feet of torque under a carbon fiber hood. Alfa’s first rear-wheel drive sedan since 1992, its eight-speed ZF automatic with electronic shifter and very usable paddle shifters are hooked to rear wheel drive via carbon fiber driveshaft.

Alfa’s V-6, basically a Ferrari V-8 with two cylinders removed, looks pretty under its plastic cladding. It’s set back and down for better balance and topped with a stiffening cross brace. With a muttering snarl at idle, Alfa says it offers a power-to-weight ratio of almost seven pounds/hosrepower, that power dialed in via a console-mounted DNA selector that also plays with suspension, steering feel and economy setting.

Set in Dynamic, perfect for daily driving, the eight gears kept the engine in the turbos’ sweet spots with no lag between decisive upshifts, each with a gruff exhaust bark. Downshifts went quick and smooth, with a throttle blip and more snarl and pop from the exhaust. Paddle shifters delivered gearshifts in less than 100 milliseconds. Launch hard and we had a millisecond of moderation before our 9,300-mile-old Alfa’s turbos smoothly kicked in and wheelspin briefly beckoned in the first-to-second shift en route to 60-mph in 4.1 seconds and 100-mph in 8.7.

“Race” mode shuts down stability control, kicks in more aggressive engine and throttle tip-in, really sharpens shifting and opens up the exhaust to bark, snarl and crackle. We had much sharper brake and steering feel as the suspension really firmed up, tightly damping movement with firm rebound. A button in the DNA knob allows it be set to a milder ”Mid Damper Active” setting – firm but a bit more buffered. In Race, I controlled rear wheelspin with my foot, so we slipped a bit to 60 mph in 3.8 seconds, and 100-mph in 8.6. It was fairly easy to control the rear power on dry pavement.

In every mode, the eight-speed automatic offered none of the harshness some single clutch systems can give. And that exhaust gave a Ferrari-like snarl straight from pipes with no electronic augmentation – tunnels were wonderful! We got 15 mpg on premium when driven in “A,” the V-6 shutting off at stoplights in all modes except Race. I sometimes beat the engine refire, giving a brief stumble moving off at a green light.

Alfa claims near-perfect 50/50 weight distribution on our sports sedan, which lives on a double wishbone front suspension and an Alfa-link rear axle design with vertical rod. Its rear differential supposedly optimizes torque delivery to each wheel separately for improved power delivery. We found the ride perfectly composed, active suspension quickly buffering rebound on bumps even in Race – no brittleness on any surface, even cobblestones.

Our Alfa did lean a bit into a turn as its sticky Pirellis bit and active suspension handled mid-turn bumps without drama. The car remained neutral as we pushed, agile with steering input so sharp and precise with nice feedback. In Dynamic, engine and gearbox are more lively, the car eager to be pitched into a turn. We could power the tail out just a bit, easy to catch with steering and throttle as stability control aided. We had just enough stability control to help as active suspension molded the car to the road at high speed, confidence inspiring around curves. And with four adults, ride and handling were unaffected.

Set in Race, the car comes alive. Turbo boost comes on fast, wheelspin in the first three gears as the driver controls it all, lightning-quick shifts with an exhaust “blaat!” The driver can hang the tail out, holding it with throttle and very direct steering. I even got some controlled drifts on our skidpad, fairly easy to balance on throttle and steering. Plus, the info display between the gauges gives you upshift and downshift arrows when you toggle shifts in manual, which mandates you shift yourself in Race mode. 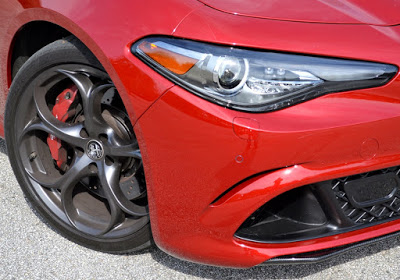 Brembo brakes have huge 15.4-inch front discs with six-piston aluminum calipers, and four piston calipers on the 14.2-inch rear discs. There was never fade even after burying the pedal repeatedly, brakes biting hard to haul us down fast with minimal nosedive. The G-force meter tagged me at 1.20 Gs in braking from high speed!

Does it look like an Alfa should? Just-retired Alfa designer Lorenzo Ramaciotti nailed it for the most part, Gilles saying the new sedan has a signature look where “power is celebrated by the front end” and the bodywork is stretched to show no “excess fat. He’s right, mostly.

Ah, but the flanks are a bit generic, fake side vents in front fenders joined by a Quadrifoglio (four-leaf clover) badge. The lower door sills flare with carbon fiber blades for effect, while a slim carbon fiber spoiler is at the trunk’s trailing edge. From the rear, you appreciate a wide and muscular set of haunches and rear underbody aero fascia with big quad exhaust pipes.

The flat-bottom steering wheel frames a 200-mph speedometer and 8,000-rpm (6,500 redline) gauges flanking a color display for the usual as well as a G-force display that’s more show than go. Long alloy paddle shifters behind the wheel don’t turn with it, but were always a handy fingertip away. Dash center is a wide screen for navigation, stereo and the like with clumsy graphics, handled by an alloy twist/tap/nudge knob in the console. Most interior controls look upscale. The back seat gave two adults decent head and legroom, but no center armrest. The trunk is deep, expandable with folding split rear seats.