Skip to content
The 370Z Roadster is still fast, fun and cozy comfy for two. But there are others that do it better and have a bit more room without feeling it, blogs Dan Scanlan. 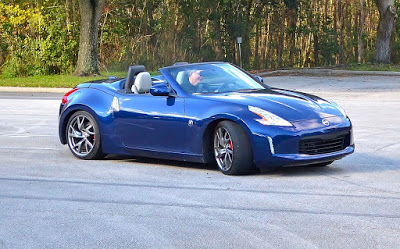 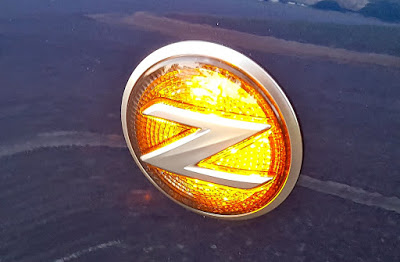 Yutaka Katayama, best remembered by media as consummate enthusiast, Mr. K, may not have been thinking “topless” when he birthed the original 240Z in 1970. But Nissan was when it revived the Z in 2002. It was a real convertible version of the iconic two-seat sports car – smaller and lighter than the last generation and not saddled with a roll bar.

But as we checked out the ‘16 Nissan 370Z Roadster on a chilly winter week, it’s hard to forget that this version is more than six years old. So in a world where other marques’ lightweight sports cars remind us what “sports” means, has the 370Z aged into the grand touring class? 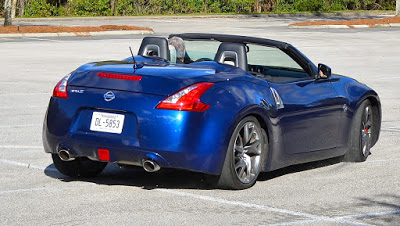 Set in “Sport,” our blue roadster pulled strong to hit 60-mph in 6.3 seconds with brief wheelspin on the shift into second, and a sporty exhaust snarl. A flashing light on the center tach alerts when you close in on the 7,500-rpm redline, while a downshift rev matching system in “Sport” mode blipped the throttle to match revs, audibly evident in third-to-second downshifts. The engine had power in any gear and could easily pass anything in sixth gear. We saw an indicated 25-mpg during mostly highway driving, dropping to about 20-mpg in mixed use on premium.

The double-wishbone front suspension with forged aluminum arms and aluminum-alloy cradle, and a four-link rear suspension delivered a firm yet supple ride that handled bumps and expansion joints without drama. It wasn’t soft, but it buffered potholes well, giving it a supple grand touring ride. 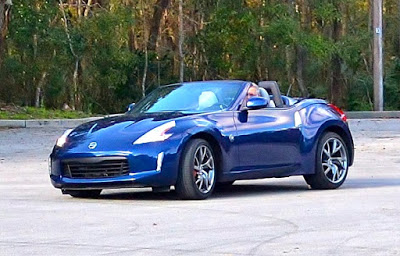 With rear-wheel-drive, the Z was a blast on curving roads, where it cornered fairly flat and quite neutral, only showing some understeer when pushed. Play harder and grip remained high, with the ability to power-out the tail with throttle, caught by stability control if you get too hot. Shut off traction control and you can play and catch the tail quite well. It’s fun, but still feels a bit less sharp than some of its competition. The power steering had a precise feel and lots of feedback, plus a tight turning radius. The Touring Sport had larger 14-inch front/13.8-inch rear disc sport brakes and offered precise pedal feel, quick stops and little fade after repeated hard use. 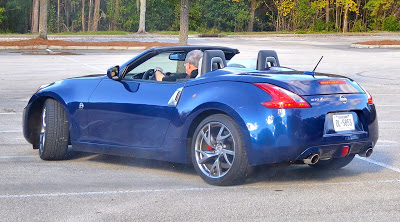 Nissan’s first 240Z was light, with a torquey engine and classic handling. But by the time the company retired the 300Z in 1996, it had become a heavy luxury GT. Nissan went back to its roots when a fully redesigned 350Z made its 2002 re-intro. It was 2.5-inches shorter, with minimal overhangs, smooth long nose/short tail look and a more aggressive stance. Then came the sixth generation in 2009, with a lightweight aluminum hood and doors and rectangular headlights. In 2013, some minor redesign to freshen a four-year-old look – the nose’s air intake is widened, with slim LED DRLs added to the outer edges. 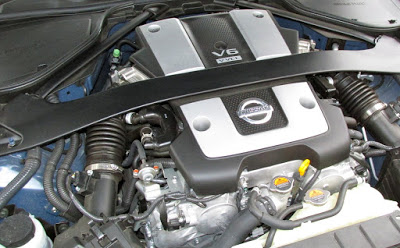 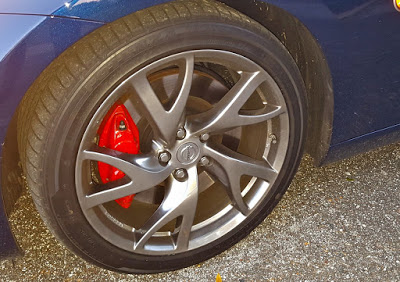 The close-coupled cockpit design is familiar, in black with cream high-back bucket seats, some silver accents and amber/orange instrument lighting. The side windows dip when you grab the alloy door handles, unsealing them from the power top, but they both stuck a bit. You drop down into very supportive seats with heat plus noisy power ventilation on its high setting. There’s power slide and seatback tilt, but my long legs would have loved just a touch more. Manual front and rear height adjustment helped, with the thick-rimmed steering wheel offering familiar silver Nissan controls for stereo, cruise, navigation/phone/stereo voice command and Bluetooth. It tilts but doesn’t telescope, the small hooded gauge package moving with it. 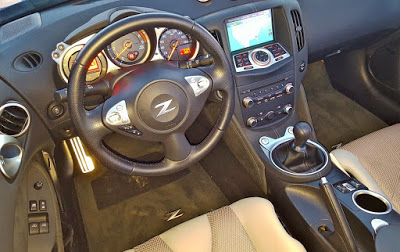 A deeply-inset central 9,000-rpm tach has a dot matrix-like digital gear and normal/sport mode readout. A 180-mph speedometer has a dated digital trip computer with orange dotted gas and temperature gauge on the left. The LEDs wash out on a sunny day. Dead center is a 7-inch navigation touch-screen with 8-speaker Bose AM-FM-SiriusXM-CD sound system with weather and radar, fuel economy, traffic and maintenance information. Voice command handles navigation, phone, audio and information. 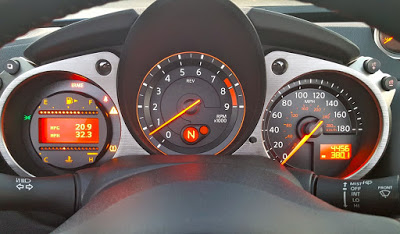 Nissan’s familiar menu buttons with an alloy zoom ring make up the control center. It works fine, but needs to be simplified and moved to the center console. Below it, the six-speed manual shifter with “Sport” button, its center console’s flanks done in a padded suede with dual stitching, as are door panels. You can remotely drop the side windows via the key fob remote, but not the power top, which raises or lowers in about 20 seconds.

The audio system can kick out tunes loud enough to be heard with the top down at 70-mph, where wind buffeting is livable thanks to a clear wind-blocker between the roll bars. But there is wind noise from the top when it’s up, making the cockpit noisy at highway speed. The trunk is boxy but very small. Visibility with the top up is OK, with a slim rear window. 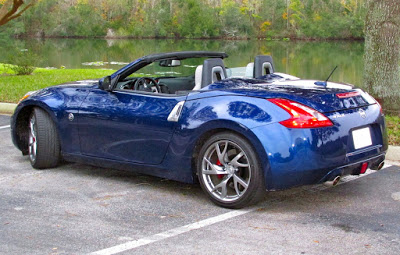 There are a few other rear wheel drive convertible sports cars out there – the new Mazda MX-5 Grand Touring roadster that starts at $30,000, as does the Ford Mustang V-6 convertible. The Chevrolet Camaro 2LT is $37,000, the Audi 2.0T TT Roadster is $46,000 and the BMW M235i $49,000. The Mazda is still the corner-stitching king, fun to toss around, with just enough power and grip to play with. But the latest Camaro is pretty swift in curvy bits, as is the all-wheel-drive Audi, with the BMW and Mustang not too far behind. The Camaro and Mustang are the biggest and the most practical, with back seats and trunks, while the BMW has smaller versions of both. The Mazda and Audi are true two-seaters like the Z. My favorite: Mazda!

For more information about the 370Z Roadster, please visit http://www.nissanusa.com/sportscars/z-roadster