Skip to content
Race series could prevent so many of their own problems if they would simply allow the pole sitter to do his job, blogs Stephen Cox. 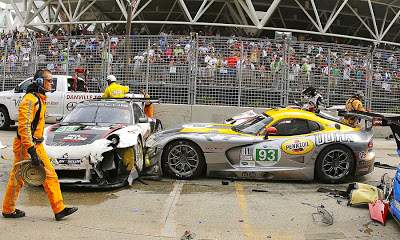 Every driver’s meeting across the country is plagued with endless speeches dictating what the drivers must do at the start of the race. Here are a few of the pre-race instructions I’ve been given just over my past twenty races or so:

I’ve seen Race Directors and flagmen ramble for fifteen minutes desperately trying to
micro-manage the start of a race and still fail to get a decent start for one simple
reason: They insisted on stripping the pole sitter of his rightfully earned authority
and re-assigning it to the series.

The flagman shouldn’t decide when a race starts. The Race Director shouldn’t decide when a race starts, nor should he decide the speed that the field must maintain to start a race. There is no need to accelerate simultaneously or reach a painted stripe on the racing surface or any of the other choreographed, nonsensical instructions given to drivers. The field belongs to the person who earned the pole. His job is to allow the field to properly align, and then choose when and where the field will accelerate. 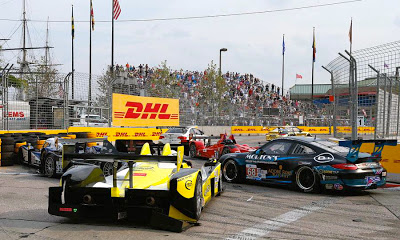 The American Le Mans Series had all sorts of problems at Baltimore last month, above, because they failed to heed the authority of the pole sitter. The second-place starter jumped quickly and everyone else followed, assuming – correctly – that the series would ignore the
pole sitter’s pace and throw the green flag anyway.

The fact that an awkward pair of chicanes was plunked down in the center of the track at the beginning of the main straightaway didn’t help, either. Chicanes are the opposite of racing. They are supposed to slow drivers down. Racing is supposed to speed them up. But I digress.

The chicanes were placed in the center of the track. The field was to preserve the side-by-side rows of two by driving to each side of the chicanes at the start of the race, and observe the chicanes for every lap thereafter.

You could see this coming a mile away. The pole sitter kept a steady pace while the Second-place car nailed the throttle and left the field. The green flag was thrown and the accordion effect began, with mid-pack cars suddenly rear-ending each other. 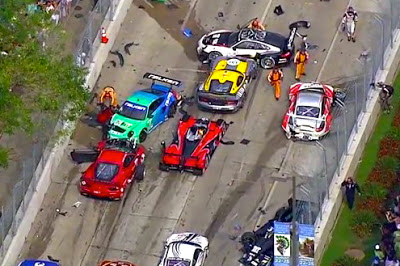 The result was an ugly, seven-car pileup, above, before a national television audience on ABC and an embarrassingly long cleanup process.

While this incident was particularly nasty, the same basic scenario is repeated weekly at oval tracks and road courses around the country in both major series and amateur events. Occasionally, series and track officials appear to be concerned that the pole sitter will take the lead in the first turn, yet this is precisely what is supposed to happen. That is not an unfair advantage. It’s the advantage that rightfully belongs to the driver who earned it.

Racing has become the most over-regulated sport in the world. Robbing the pole sitter of his rightful authority over the field and awarding it to flagmen and race directors is but one symptom of a much bigger disease but it’s a good place to start. Clean up auto racing. Let the pole sitter do his job!

Stephen Cox is a co-host of Mecum Auctions TV coverage and an active racer, sponsored by Boschett Timepieces, http://www.boschett-timepieces.com/index.php