Skip to content
Stephen Cox blogs about the most iconic of the thundering Turbo Porsche 917s.
PART III: The Replacement.

“We drove by the seat of our pants. We had to muscle the car around the track. We did not have cool suits.” – George Follmer

“I didn’t know him from Adam,” said chief mechanic Woody Woodard. “But I’d certainly heard his name. He was a good guy.”

Marilyn Motschenbacher Halder, then married to McLaren driver Lothar Motschenbacher, recalled Follmer’s arrival at the track. “Everybody loved George. He would always wander around the track when he wasn’t working with the guys on the car. He always looked good; he was so nice and always had a smile. He was a jokester. He was fun, but a dedicated driver.”

A lot of people had already heard George Follmer’s name. He had driven from the back of the grid to 15th place at the 1971 Indianapolis 500-mile race and would’ve placed higher had all his pistons functioned properly for the final 50 laps. He had already posted an Indycar victory at Phoenix and had just wrapped up a Trans-Am title days before. His talents would eventually take him to the pinnacle of American road racing and then to Europe in Formula 1.

But on July 7, 1972  Follmer stood along pit lane at Road Atlanta, clueless and hopelessly lost. 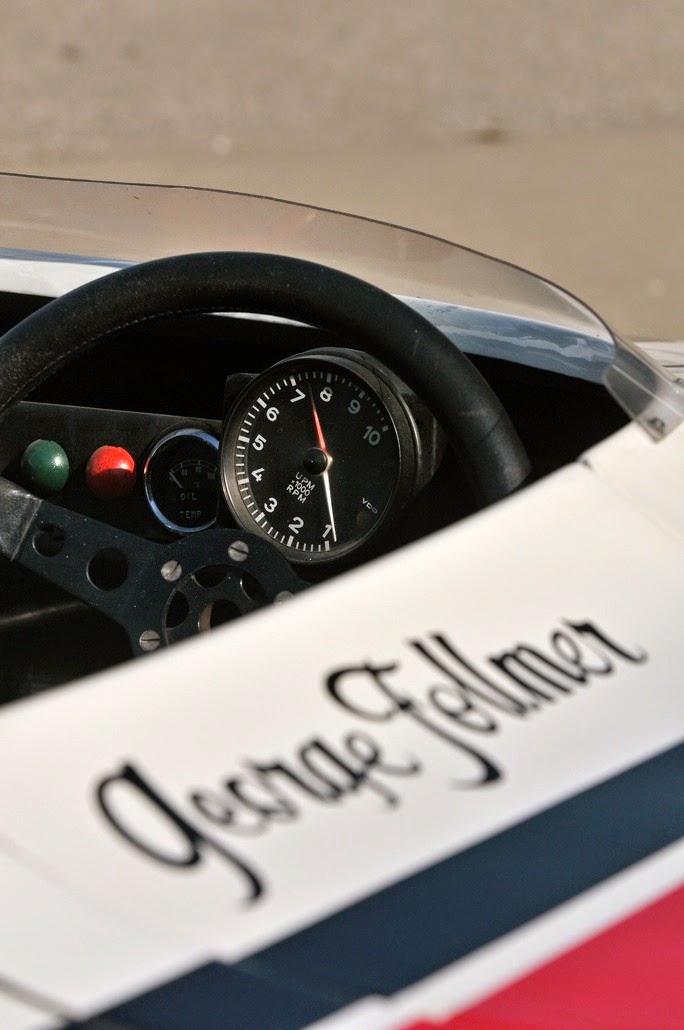 After Donohue’s crash early in the week, Roger Penske wasted no time finding someone on whom he knew he could rely. Follmer got a mid-week call from the man still known as “The Captain.”

I had driven for Penske before in 1967. The Captain called and asked me if I’d come down and replace Mark at Road Atlanta, and I said, ”Well… sure!”

When The Captain calls, you go.

That was about all Follmer knew when he hung up the telephone. He had never before seen a Porsche 917/10 racecar, let alone driven one at the highest level of competition. He had never before driven Road Atlanta. He hadn’t even seen the track. The facility was so new that the paint was barely dry.

“I got there,” Follmer recalled, “and Mark was there on crutches and told me a little bit about it. He couldn’t tell me very much. He said, ‘You know, it’s got some [turbo] lag,’ which I expected because I’d run Indycars. ‘It’s got pretty good brakes, so go out and have fun. If you’re a pro, you’d better figure it out.’”

Donohue’s pain went deeper than his badly injured legs. Although he tried to remain professional and upbeat, he was being forced to watch from a hospital bed while his season, his ride, his championship and part of his legacy slipped away.

Follmer was gracious and knew what Donohue was going through. “You’ve got to remember that it was Mark’s car. He developed it, tested it and helped engineer it. It was his car,” Follmer said.

Woodard saw the same signs in Donohue’s eyes. “Mark did his due diligence and told George everything he could. If there was anybody who was unhappy it was Mark. It was his car. He’d gotten hurt and couldn’t race it, and now here’s one of his competitors coming in to drive his car… and winning. I think Mark struggled with that all year.”

A group of fans at Road Atlanta that weekend posted a huge wooden sign in front of their green Chevy van in the infield area that said, “Get well Mark.” But Donohue never saw it. He returned to the hospital while the usual social festivities continued at the racetrack.

Although Can Am was one of the highest forms of road racing in North America, it still had a club-like atmosphere to the participants. Every track had its own personality. The drivers had favorite restaurants in each town. They all stayed at the same motel at every race.

Their social circle was small and intimate. Marilyn Motschenbacher Halder spent much of her time at the universally recognized social center of Can Am’s inner circle, “Spanky’s trailer.”

“I don’t even remember Spanky’s last name. I don’t think anybody ever knew it,” Marilyn said. “It was an old Winnebago. There would be Denny [Hulme], George [Follmer], Revvie [Pete Revson], and the photographers, and Lothar and me, and the wives. Jackie Oliver would be there. We’d always gather at Spanky’s trailer and everybody would sit there and laugh and shop talk. They’d say, ‘You should have seen me in this turn!’ and just bench race.”

Away from the social scene, one of the more immediate business concerns on pit road was getting Follmer fitted into the seat of the L&M Porsche.

But climbing into the cockpit of the 917/10 was an acrobatic endeavor that required Olympic-level gymnastic skills. The bodywork was so thin that no weight could be placed on it. Instead the aspiring driver was to make one giant step across the fuel tanks and into the cockpit while avoiding the instruments, gear shifter, tachometer, and everything else.

Success eluded Follmer on his first try. “When you got in, you had to step on the bar,” Follmer recalled. “It was a tube frame. The floorboard – or what we called a floorboard – was just a piece of fiberglass and it was put up there with tie-wraps. So all you had to do was cut the tie-wraps and pull the fiberglass down to work on the car.”

There was a piece of tape that marked the only available spot where a driver could safely place his foot on entry. George missed it by a mile.

He stepped into the cockpit and placed his feet on the floorboard where they promptly poked through the fiberglass and went straight through to the ground. It was an inauspicious debut that inspired little confidence. 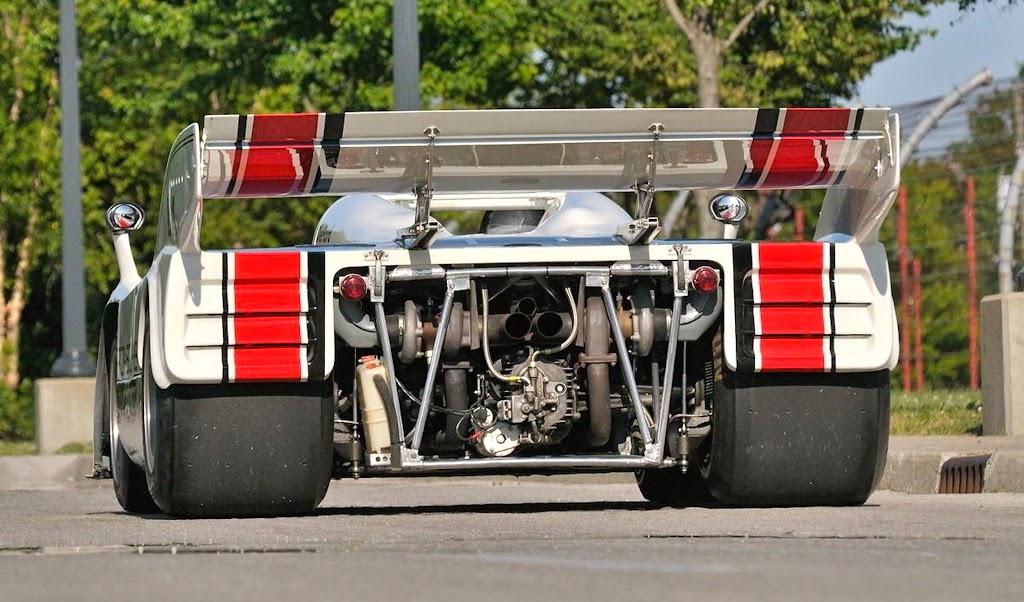 While a new floorboard was being installed on Saturday morning, Follmer got his first chance to see the racetrack. Road Atlanta had a full schedule of activity and qualifications that day so special arrangements were made to open the track at 6 am and allow Follmer a few familiarization laps… in his rental car.

“I took my rental car – it was a Crown Vic – and drove around the racetrack,” Follmer said. He was accompanied by a team engineer who pointed out how the car might theoretically react at different points along the course.

“That’s how I learned the track,” Follmer understated. “It was a pretty steep learning curve.”

He then switched from a Crown Vic to the L&M Porsche and began practicing. By the end of the final session he had posted a lap time of 1:14.163, less than one-tenth of a second slower than Denny Hulme’s Gulf McLaren. Hulme would win the pole position with Follmer’s L&M Porsche on the outside of the front row. It was an impressive performance from a guy who didn’t know how to step into the cockpit 24 hours before. Pete Revson qualified inside Row 2 in McLaren’s second entry, but neither M20 would survive the opening laps of the race.

Follmer took the early lead and built a slight advantage over Hulme, while Revson struggled with ignition problems and dropped back quickly. On the fifth lap, Hulme lost control of his M20 at nearly 180 miles per hour along the back straightaway just a few yards from where Donohue’s crash had occurred nearly a week before. A newspaper article described the carnage:

The wedge nose of the McLaren got air under it, lifted up, and, like a hydroplane run amok, flipped straight over backwards… there is a flash of orange, something heavy slamming to earth, a spray of red clay. It’s Denny, upside down.

People cluster to the wreckage, heave it over onto its belly, and fire blooms. It’s out quickly in a cloud of white powder, and they bend over the driver. He’s moving, just coming around.
He doesn’t seem to know where he is or to recognize his teammate, but in response to direction he can wiggle his toes.

It’s all right then, they can pull him out and pack him off to the track hospital.

Hulme escaped with no serious injuries, but his pumpkin-orange and black McLaren M20 was a total loss after cartwheeling for more than a hundred yards. His teammate fared little better. Revson continued to have ignition problems and his race was over. McLaren was done.

Follmer was dominant in the L&M Porsche. Now alone at the front of the field, he was getting faster as he learned the track. Greg Young, holding down second place in an outdated McLaren M8F, had no chance. Follmer lapped the entire field and cruised to victory.

Porsche was ecstatic. This was the win they’d hoped for at Mosport. Now, with their confidence soaring, they were ready to spring their new American road-racing venture in the German press.

Penske Racing was overjoyed, as were the sponsors and fans. The only person who really didn’t know what to think was George Follmer.

“I was there to do the best I could.”
To be continued.