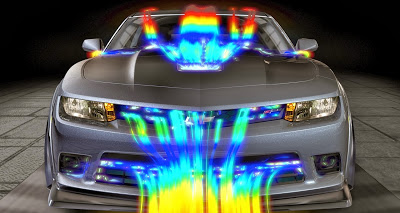 When it comes to keeping its tail on the track, the ‘14 Camaro Z/28 manages airflow like few other production vehicles, generating downforce like a racecar for high-speed stability and greater cornering capability. Numerous modifications were made to the exterior, compared to the Camaro SS, with new and revised content developed to improve aerodynamics, powertrain cooling and brake-system cooling. They help the Z/28 produce 440 pounds more downforce at 150 mph, than the SS which generates slight lift at that speed.

In fact, the aerodynamically optimized design helped the Z/28 log a lap of the Nurburgring road course four seconds faster than the Camaro ZL1, and beat published times for the Porsche 911 Carrera S and the Lamborghini Murcielago LP640 Supercar.

“Most production cars are designed with some lift at speed in order to slip through the air for greater fuel economy, but the all-new Camaro Z/28’s track-oriented purpose dictated an entirely different take on airflow management,” said Tom Froling, lead development
engineer – aerodynamics. “Its carefully tailored aerodynamics package generates downforce
for greater handling stability at speed, and the grilles are optimized to meet stringent
cooling flow and brake-cooling requirements.” 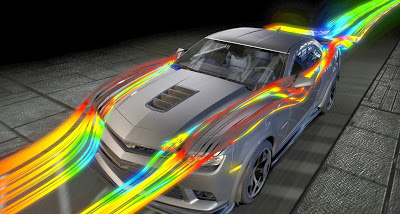 The new Camaro Z/28 is the fastest factory-produced Camaro ever on a track, with improved speed coming from increased grip (capable of 1.08g in cornering acceleration, due to comprehensive chassis revisions), increased stopping power   (Brembo carbon ceramic brakes capable of 1.5g in deceleration, and consistent brake feel, lap after lap) and reduced curb weight (weighs 300 pounds less than the supercharged Camaro ZL1, with changes ranging from lightweight wheels to thinner rear-window glass).

Power comes from the 7.0L LS7 engine, rated at 505 horsepower and 481 pound-feet of torque. A close-ratio six-speed manual transmission is the only transmission offered and power is distributed to the rear wheels via a limited-slip differential featuring a helical gear set, rather than traditional clutch packs, for optimal traction.

“It’s a track-proven, uncompromising collection of hardware that generates the Z/28’s power and channels it to the ground, but it’s the way the Z/28 manages airflow that truly helps it stick to the track to make it fast and stable at speed,” said Froling. “None of the car’s unique exterior elements is without a performance-enhancing purpose. In fact, it shares several racing-inspired aero features from various Camaro and Corvette racecars.” 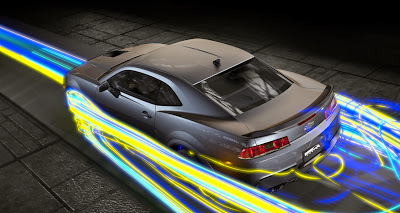 Additionally, the Z/28’s unique front fascia plays an important role in airflow management. It is based on the Camaro SS, but the fog lamps, air dam and the upper-base grille are replaced with covers for deleted fog lamps (to reduce weight), an air duct support bracket, an airflow-optimized upper grille for enhanced cooling and a modified fascia lower inlet that incorporates provisions for the brake cooling ducts. They funnel air from the splitter/lower grille through
the ducts to the brake rotors and calipers.

The new Camaro Z/28 arrives in dealerships next spring, ready for the 2014 racing season. For more information on 2014 Chevy vehicles, please visit http://www.chevrolet.com/