Jim Palam, our man on the West Coast, dug in to deliver a dozen delights from his five-day crusade to capture some of the gusto and glory of Monterey Madness.

For the uninitiated it’s simply overwhelming: An endless smorgasbord of mighty and majestic machines, fabulous fashion and sensory extravagance. It’s enticingly spread out along the Monterey Peninsula and yours to consume if your pockets are deep and your energy level high. When I wasn’t thinking Monterey Car Week is a smorgasbord I was thinking it is a Thing of Beauty. A good example is this stunning ‘61 Ferrari 250 GT SWB Berlinetta – made even sexier by the proximity of tight-white designer jeans. It was the jewel of the Ferrari Performance Collection at the RM Sotheby Auction.

When the Japan-exclusive Koenigsegg Agera RSR was introduced in 2016 it made quite an impression. Fast forward to the Quail Motorsport Gathering 2017 and this turquoise, black and gold beast, one of three built, still snaps necks even when just parked.

Take a seat and imagine yourself in Milan. It’s 1901 and newly formed Isotta Fraschini has just built Chassis #1. This little single-cylinder invention was used as a test vehicle. In 2015 it was fitted with wicker seats so it could be driven in the London to Brighton Run. This historic car was one of the 200+ automotive wonders on the field at the Pebble Beach Concours D’Elegance this year.

It’s a dilemma only James Bond can handle: Do I take the Supercar or the Super-yacht? Poised for action at Concorso Italiano in Seaside, this matte blue L63 Lamborghini Huracan Avio Special Edition will definitely get your heart pounding as you set out to test its 200+mph top speed. You can cool down after your run with a little cruise in the yacht!

Not-so-mellow yellow! This ‘67 Ferrari 412 P Competizione has a wind-tunnel-inspired aluminum body, a 410 horsepower 4-litre V12, six Weber carbs and an indulgent amount of attitude. In 1968 Ferrari converted it to road specs for Dean Martin, Jr. It’s since been converted back to original racing trim. Its crackling race engine and bright yellow livery made it one of the head-turners on the winner’s ramp at Pebble Beach.

New to the Peninsula this year was Worldwide Auctioneers’ Pacific Grove Auction. With a location on the municipal golf course just down the road from my hotel I just had to check it out. Sitting race-ready under the gallery tent was the No. 26 Fred Kepler built ‘68 L88 Corvette. L88 + Car Guy = Heaven!

Back to the Future? The folks at Nissan were certainly having fun when they produced this sleek, open-wheeled, all-electric retro-roadster. Prototype 09 was born from the premise “What if Infinity created a race car in the 1940s?” On the field at the Quail Motorsport Gathering this handcrafted, modern technology gem from Japan glistened for all to enjoy.

Pagani owners are accustomed to interiors that look like fighter jet cockpits. If you’re like me, staring at the dash of a $2.4 million supercar interior is akin to staring at a centerfold: I just can’t peel my eyes away. This Pagani Huayra Roadster is one-of-one-hundred and production has ceased. This Roadster was on display with a bevy of pricey Paganis at the Quail.

I had the good fortune to talk with Peter T. Boyle of Oil City, PA. He is very comfortable in the rarefied air of the Pebble Beach Concours D’Elegance – as well as sitting here on the tool compartment of his show-winning ‘28 Isotta Fraschini Tipo 8A SS LeBaron Cabriolet. This beautiful Boattail was originally a gift to silent-screen star Marguerite Clark, who was the inspiration for Walt Disney’s Snow White.

James Hetfield of Metallica calls Rick Dore’s custom creations, “Sleek, classy and timeless.” Rick brought two of his beauties to the Quail Motorsport Gathering,  After Shock in the foreground and Shangri-La, background. After Shock started as a ‘37 Ford – with an Art Morrison chassis and body by Luc Delay. 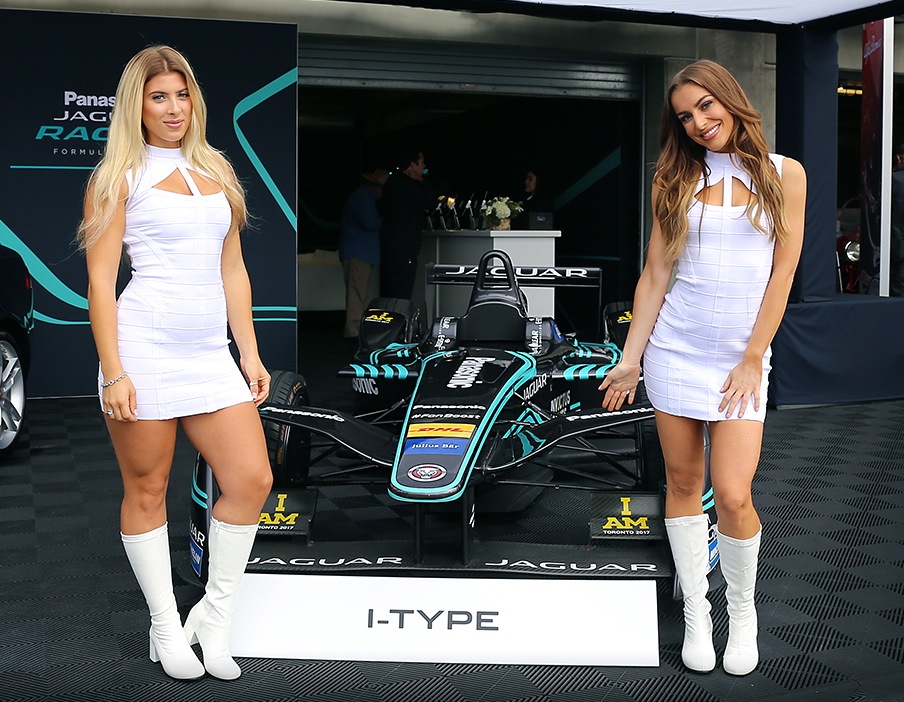 Can you see the I-TYPE all-electric Panasonic Jaguar Formula E racecar? It’s that low thing between the ladies in white. Exploring the paddock area at Laguna Seca Mazda Raceway is one of my favorite things to do during Monterey Car Week. That and well, looking at “Things of Beauty.”