Skip to content
I don’t do much amateur road racing these days. But I really should. The ending alone makes it worthwhile and no matter how many times you see it,
it never gets old, blogs Stephen Cox. 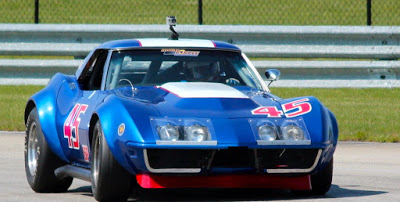 The World Racing League held its 16-hour amateur endurance race recently at Texas World Speedway and league president Joey Todd was kind enough to hook me up with an amazing team called Rocksteady Racing.  Not only did a thrilling turn of events take us to the podium with only 40 minutes remaining, but I got to experience one of the finest moments in sports.

Endurance racing is a grind. It takes weeks to prepare the car for a 16-hour event. The team then travels to the venue sets up shop, unloads the trucks, and checks into a hotel. Friday is a practice day. You’re hustling from 6 am until 10 pm. Sometimes later. Then comes two days of hard racing, with the crew working on the car day and night. The attrition rate is brutal.
By the time the race comes to its final lap, you are physically and emotionally exhausted. But when the flagman gives the “one lap to go” signal and reaches for the checkered flag, an amazing thing happens… everyone ignores the rule book, climbs over the pit wall and walks out toward the race track.

Mechanics drop their wrenches. Crew chiefs climb down from their perches. Wives, girlfriends, kids and whole families jump over the wall and walk toward the track in a massive wave of humanity. Not a soul remains in the garage area and the pits are abandoned.

The inside wall of the front straightaway is lined with hundreds of people, and everyone is waving something. A flag, a shirt, a cap… anything colorful that will fly in the wind. A thousand cameras are pointed at the overall winner as the checkered flag is thrown. Corner workers fly every flag they can hold. One particularly enthusiastic official in Turn 13 stood atop the tire barrier and waved his flags as high as he could reach. Safety crews abandon their vehicles and rush to the track to salute the field.

But it’s not just the winner who is honored. Every single car that crosses the finish line – in first place or last – is cheered by a thousand hoarse voices. The emotion of that moment is very much like the feeling experienced by fans on the final lap of the Indianapolis 500, though on a much smaller scale.

In order to understand it, you can’t just show up at the end. It won’t be the same. You must be there for the entire event. You have to bleed a little and have some skin in the game. But it’s worth it. There are few moments in sports that surpass the final lap of an endurance race.