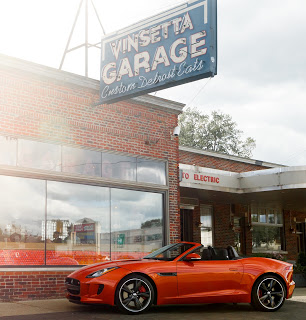 If that isn’t a big enough surprise, behind the wheel of one F-TYPE will be Jaguar Design Director, and passionate hot rod enthusiast, Ian Callum. For the past 18 years, Ian has never failed to participate in the Pebble Beach Concours d’Elegance in California where he’s been an official judge and Jaguar ambassador.

But, as a lover and owner of classic American performance cars – a gorgeous ‘32 Ford Model B coupe and a ’56 Chevy Two-Ten custom sedan – Ian has always been disappointed that the Dream Cruise has landed on the same August Pebble Beach weekend. With this summer’s landmark launch of the all-new Jaguar F-TYPE, Ian felt the time was right to head to the ‘Motor City’ and showcase Jaguar’s first new sports car in 50 years at this weekend’s Woodward Cruise.

How could we not be there? After all, this is the world’s biggest one-day automotive event with an estimated 1.5 million performance car enthusiasts lining both sides of Woodward Avenue between Pontiac and the Detroit city limits just south of 8-Mile. The United States will be the F-TYPE sports car’s largest market, and the crackling V8S model, its best seller. 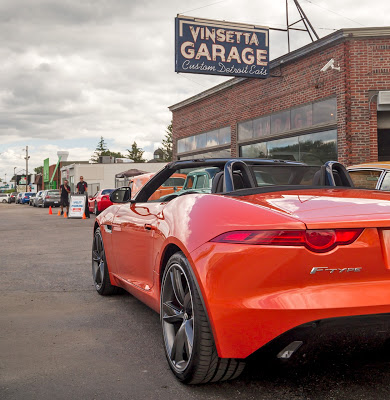 Ian and I will be “cruising” Woodward with a pair of ‘14 Jaguar F-TYPE roadsters – a 495-horsepower supercharged V8S and a 380-horsepower supercharged V6S. When we’re not in the cars, we’ll be based in the parking lot of the famous Vinsetta Garage restaurant, above,
– the oldest gas station east of the Mississippi and a true Motor City landmark. It’s on Woodward near Catalpa Drive in Berkley, 20 or so miles outside Detroit.

This is such a fun place. It’s been around since 1919 and, after they stopped pumping gas in 2011, the building was bought, lovingly restored and transformed into a terrific restaurant by Curt Catallo and KC Crain. Crain is VP and group publisher at Crain Communications.

Ian and I are also excited that there’ll actually be another Jaguar F-TYPE cruising Woodward with us. Since 1992, Joe Roeder, a service consultant at a local Jaguar retailer, Jaguar of Troy, has been transforming Jaguars into look-alike Police cars for the Woodward Cruise weekend in honor of fallen Michigan police officers. Joe, an auxiliary sergeant with the Hazel Park Police Dept., will be behind the wheel of his Jaguar F-TYPE Police Special this weekend.

We’re really looking forward to joining the Dream Cruise with our Jaguar F-TYPEs and seeing the crowd’s reaction to our modern British muscle cars. One thing’s for sure; the awesome sound of the F-TYPE V8S’ exhaust will fit right in with all that American muscle! 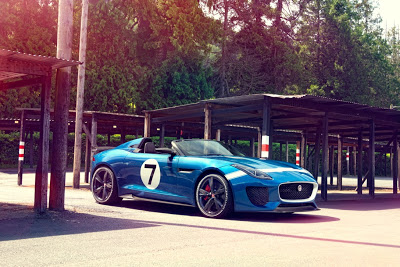 Of course, while Ian and I will be in Detroit this weekend, Jaguar Land Rover will naturally have a strong presence at Pebble Beach and on the Monterey Peninsula. We’ll be hosting our Friday evening Jaguar VIP party in partnership with Playboy to introduce our new high-performance models, including the ‘14 F-TYPE, XJR and ultra-track-ready 550-horsepower XKR-S GT. We’ll also have our sensational Project 7 Concept Car, above, making its North American debut on the Pebble Beach concept lawn on Sunday.