Stephen Cox blogs about one of our great racetracks you’ve probably never seen. 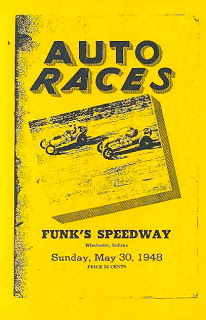 In the spring of 1914, Indiana farmer Frank Funk had an idea. This whole newfangled automobile thing seemed to be catching on. Lots of folks were racing them. Carl Fisher had recently built a big oval near Indianapolis and scads of people were paying to see his 500-mile race every year.

Funk had made good money in farming. He had plenty of acreage, and his fields, just west of the small town of Winchester, didn’t grow enough corn to affect his bottom line either way. So why not try his hand in the auto racing industry?

By the summer of 1916, Funk’s Motor Speedway was in business. Big business. And it has remained active ever since, making it the third-oldest racetrack in the United States and among the oldest circuits in the world. Today it is known as Winchester Speedway.

From the 1920’s through the 1960s, Winchester was a primary training ground for Indy 500 drivers. Ironically, the grandstands held 6,000 fans – considerably more than the 4,000-seat capacity of today – and they were usually full. 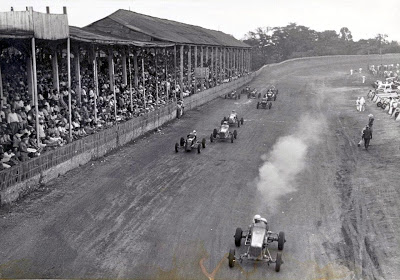 Despite being one of the highest banked tracks in existence and perhaps the fastest half-mile anywhere, Winchester Speedway originally had no guardrails. A mistake in one of Winchester’s 100-mile-per-hour corners was likely to launch a hapless driver into orbit! Photo above, 1936.

The track was designed with a clay surface and remained as such until it was paved in the 1960s. Dust was a serious problem during Winchester’s early years and Funk solved the issue – mostly – by dousing the track with oil just prior to each event.

The famed oval has remained virtually unchanged for more than one hundred years. The layout hasn’t been altered by an inch. The insane 34-degree banking (parts of the track reach 37 degrees) harkens back to a day when racing really was dangerous and there was no such
thing as a routine crash. The grandstands are a bit smaller and have no roof, but occupy
the exact same place and position as in 1916. The track is still recognizable, even from photographs dating to the early-20th century.

But Winchester fell on hard times when Indycar abandoned American short tracks and their drivers in the early 1980s. Rather than the birthplace of Indy champions, Winchester Speedway became just another track struggling for survival. Chatting with current owner Charlie Shaw Saturday night just before the green flag fell on the World Stock Car Festival, I asked him how Winchester could respond to this challenge.

“The people in open wheel racing are going on to NASCAR,” Shaw responded. “The big challenge now is to get them through here and into NASCAR, and then get some of those drivers to come back and run in our races.” 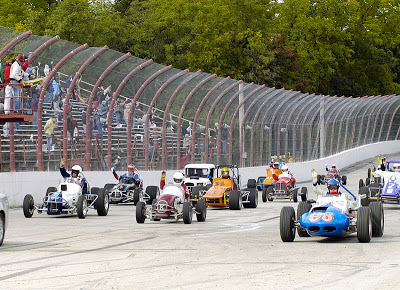 “Usually, on a given Sunday, more than half of the drivers in the field in NASCAR have raced here. That’s not nearly as well known as the track’s connection with the Indy drivers. I don’t think I’ve done a real good job of getting that conveyed, but that’s actually
a fact,” Shaw concluded.

Winchester Speedway still requires more sheer courage than any track I’ve ever experienced. Admittedly, I’ve not driven all the major speedways in North America, nor do I make any such claim. But I’ve raced enough of them to make a comparison. The Milwaukee Mile, Texas Motor Speedway, Iowa Speedway and many others are all great circuits, but I assure you that not one of them takes your breath away like Winchester. The place is wickedly fast and genuinely treacherous. The G-forces are staggering.

Shaw said of short track ace Gary St. Amant, “They’re getting a 3,000 to 3,200-pound load on the front wheels when they go into the corner. Well, if you think about it, that’s more than the weight of the car and people have a hard time getting used to that.”

“Some of the greats didn’t win any races here. It’s humbled some people. I’ve had NASCAR drivers tell me that this place fascinates them and they have a chill run up their back
when they get out there.” 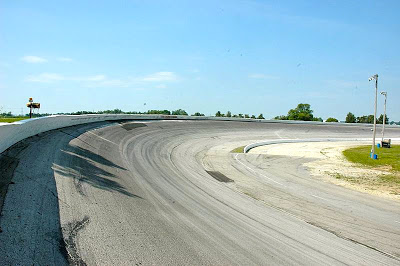 And hurry. The track’s future is not guaranteed. It was Shaw’s purchase of the facility that prevented it from being shut down long ago. There aren’t many Frank Funks left. When I asked Shaw if he realized that he was the modern incarnation of the old farmer who built the track, he shrugged, “I never considered myself a big promoter, I just didn’t want to see it close.”

Stephen Cox is co-host of Mecum Auctions’ TV coverage and a racer sponsored by http://www.boschett-timepieces.com/