It’s all about fins and flames at the Fairpark, blogs CGC’s Jim Palam! 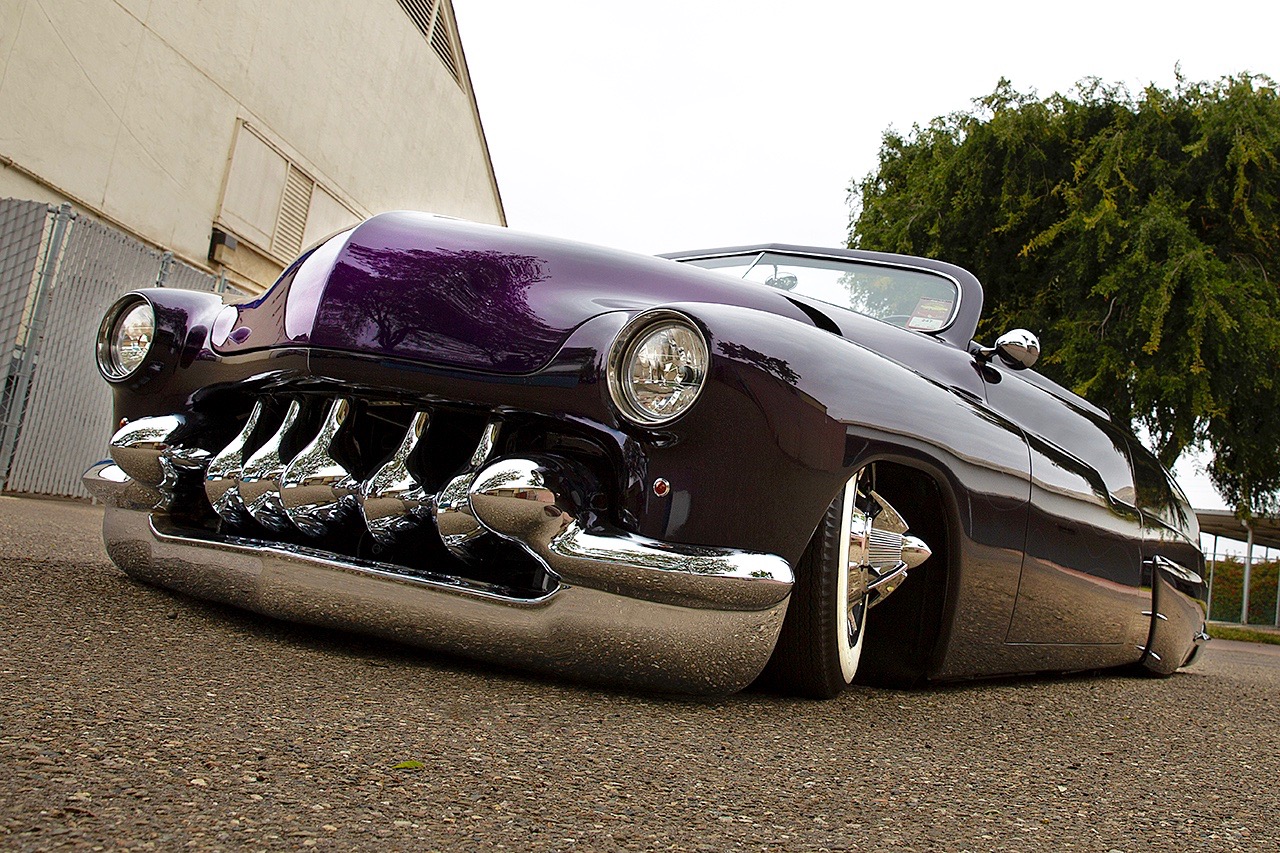 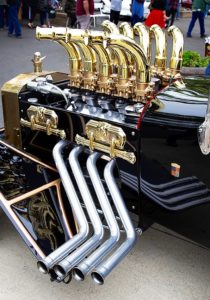 Let’s call it a mash-up of pinstripes, cuffed-denim, fins and flames – tucked and rolled into a colorful celebration of Kustom Kulture at the Fairpark in Santa Maria, CA. Now in its 38th year, the family-friendly 2019 WEST COAST KUSTOMS: CRUISIN’ NATIONALS! proved once again that interest in and passion for customized American cars continues to sizzle.

Thousands of show-goers participated in WCKCN events, including the popular Friday Night City Cruise, Kustom Kulture Art Show, Model Car Show, Swap Meet, vendor booths and a Rockabilly concert. Hundreds of extraordinary customs were on display – many from legendary builders and customizers including George Barris, Gene Winfield, Dave Crook and Dale Gould. This was a car show of the people, by the people and for the people. Long may it roll!

No custom car show would be complete without a Slammed Sled. This ground hugging, Plum Purple chopped ’50 Mercury, top, with frenched headlamps and massive chrome grille and bumper is a prime example of the mandatory customizing treatments typically used back in the day to create a proper Lead Sled.

If you watched TV in the 1960s you’ll probably recognize the business end of the “Munster Koach”, above, right, designed by George Barris in 1964. It took 21 days, three ‘27 Model T bodies and $18k to “bring the Koach to death.” This, the only authorized 2nd “Munster Koach” ever built by Barris, remains in the Barris Family collection. 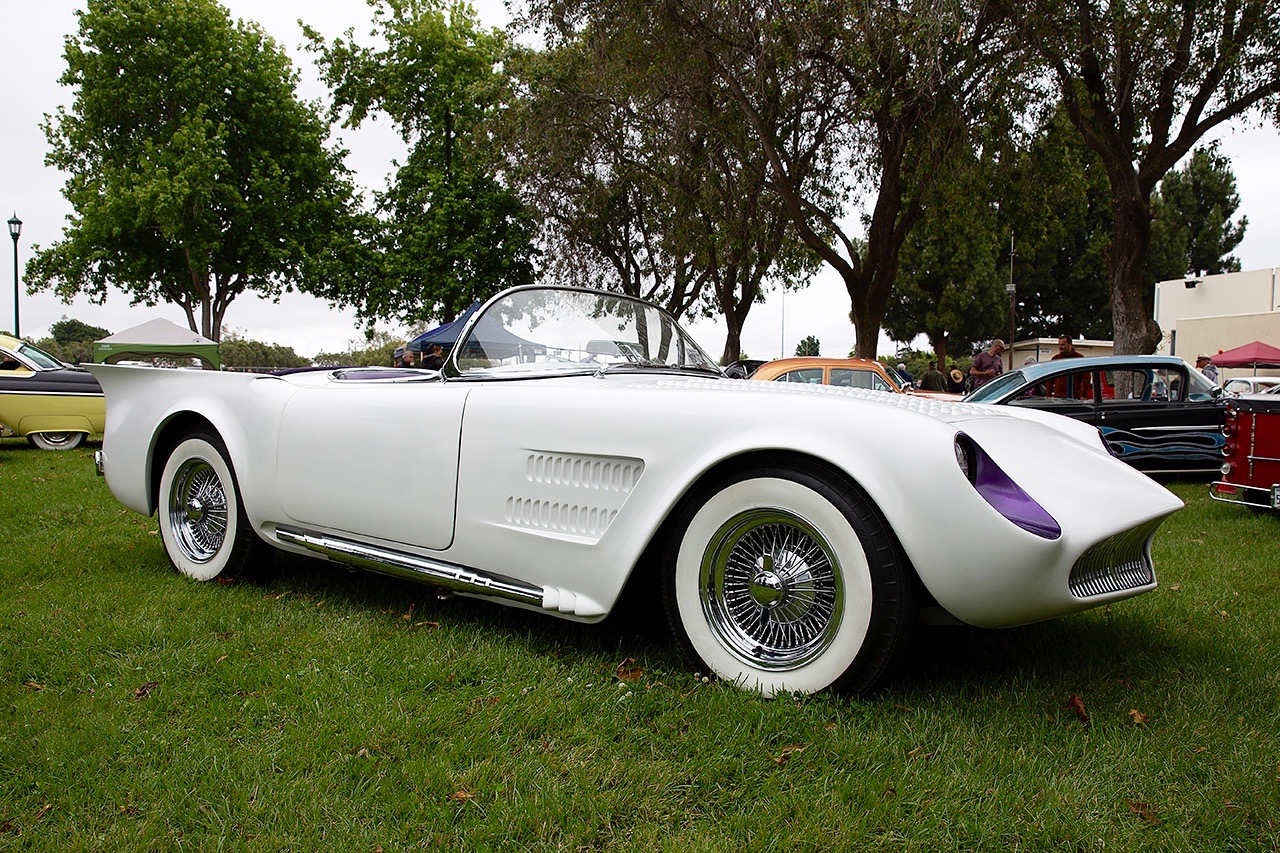 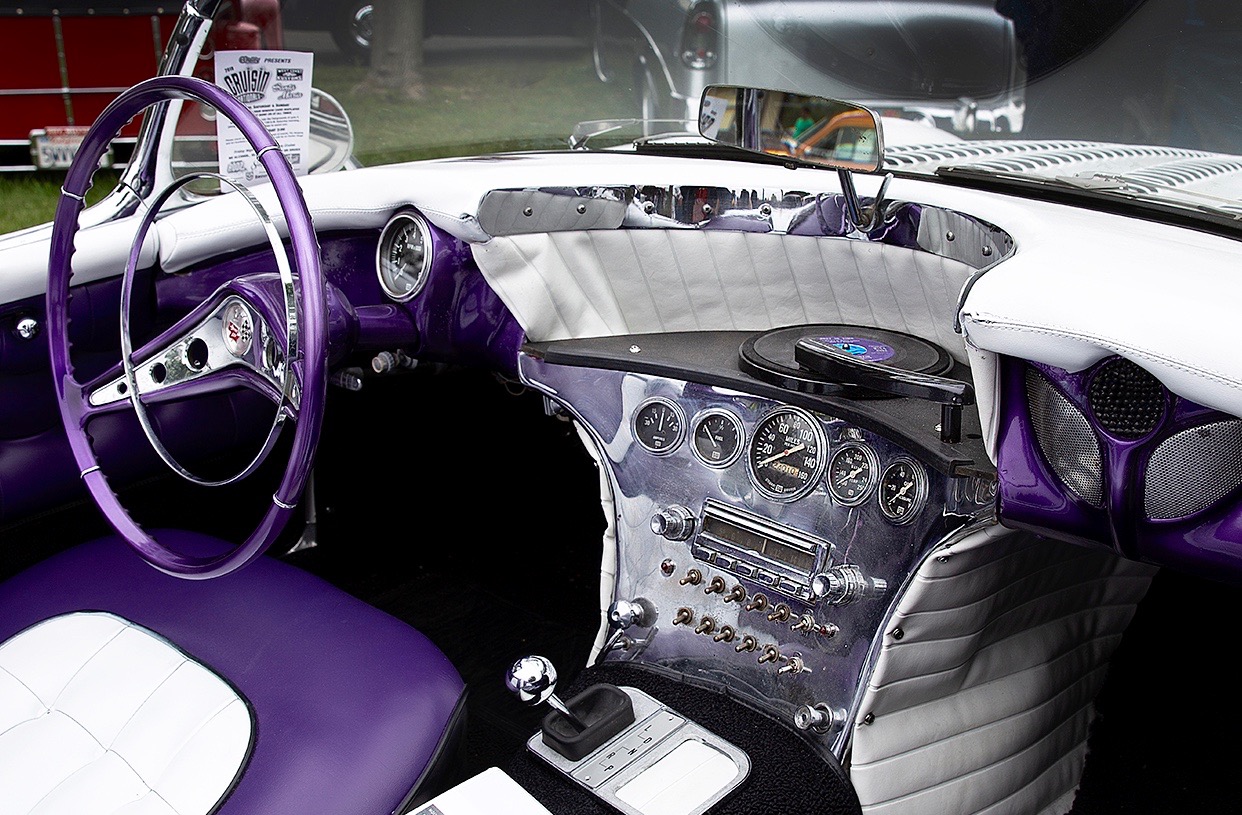 1950s/60s-era car customizer Bob McNulty’s radically altered ’55 Corvette “Shark” was rescued recently from a dusty tomb beneath the Petersen Automotive Museum. Many iterations of this Corvette were featured in car magazines from 1958 through 1964, as Bob continued to upgrade and modify its components and appearance. When Bob died in a boat accident, his mother donated the car to the Petersen.

Years later, the Petersen Museum decided to auction off the “Shark” that needed a serious restoration. Kevin Bennett was the high-bidder who acquired this historic custom, and he’s been busy bringing it back to its mid-century glory. One of the features added back is the dashboard record player. Time to break out the old 45s! 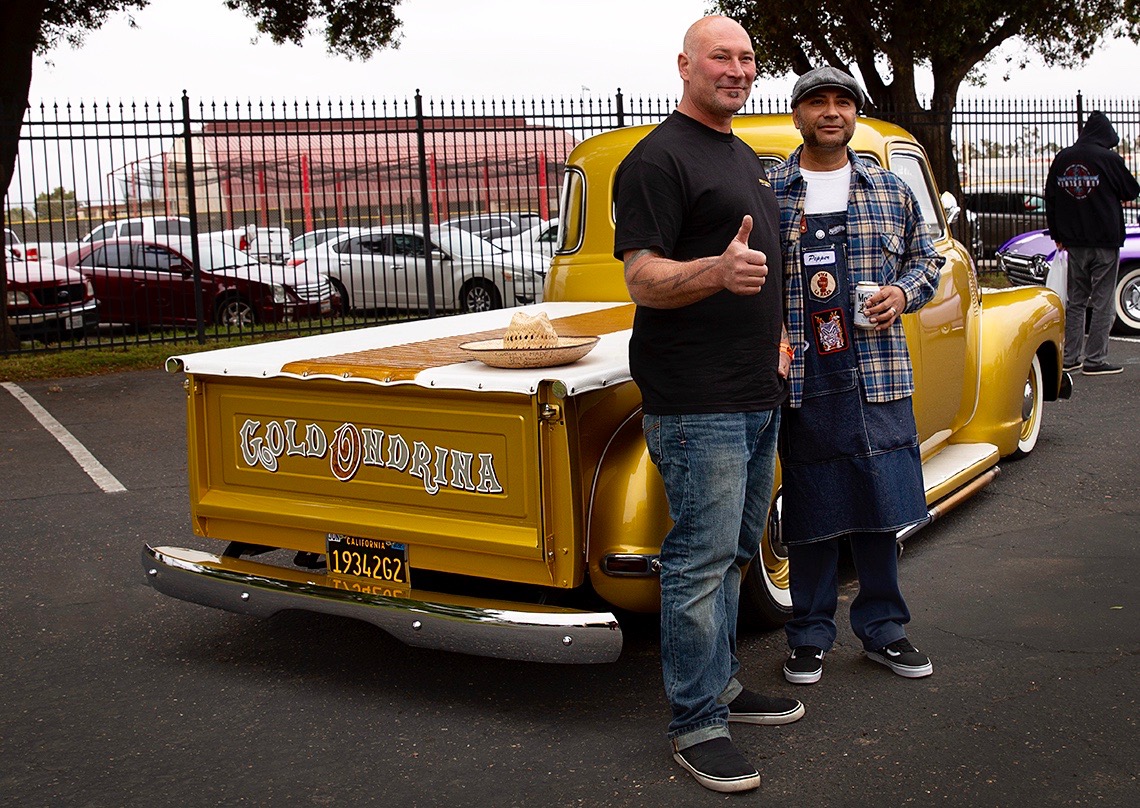 You may recognize thumbs-up Ian Rousell, the master car builder and star of Motortrend TV’s Full Custom Garage. Despite his tough guy appearance, Rousell is always friendly and willing to accommodate requests – like signing a sombrero for Pepper, the owner of the “Gold Ondrina” pickup. 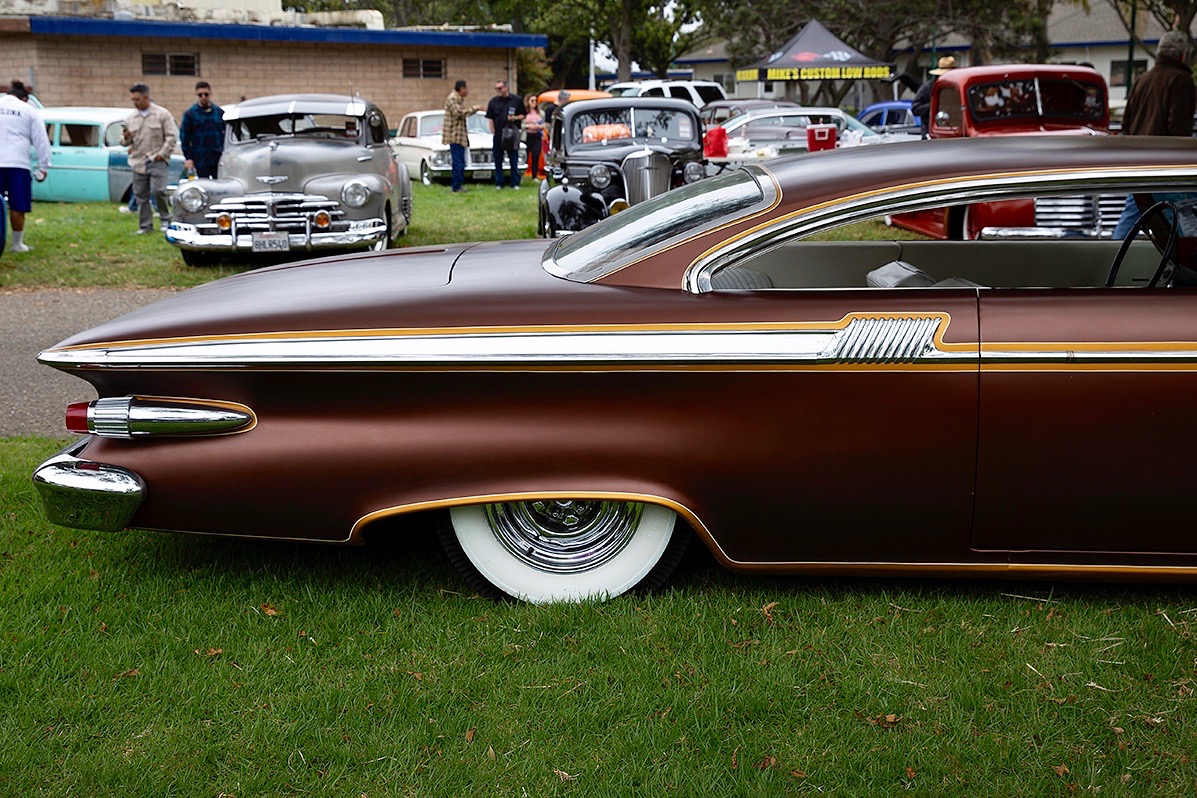 OK, here’s one for you experts who could identify the year, make and model of a car a block away back in the 1950s and 1960s. All you needed then was a recognizable grille or taillight, or maybe the sound of the motor. Show us you’ve still got it by identifying the YM&M of this long and low custom on the grass at the Cruisin’ Nationals. Send us your guess via the comment window below. 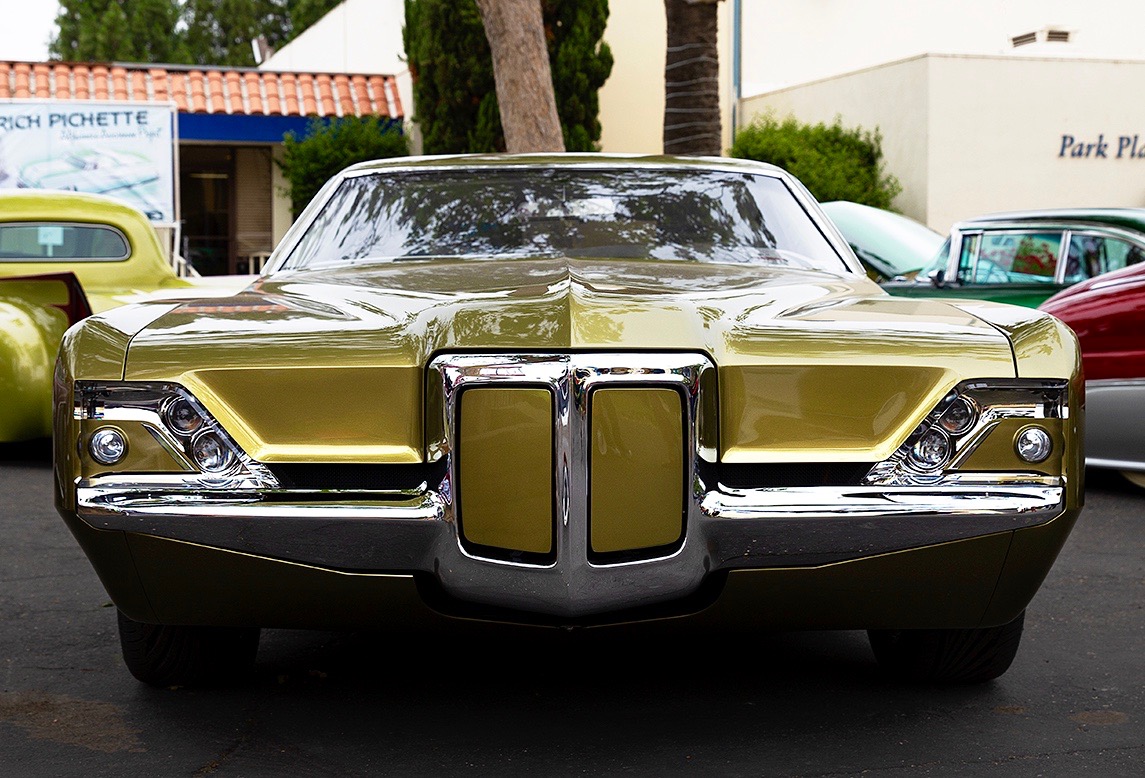 What does the Oscar Mayer “Wienermobile” and this custom ‘69 Pontiac Grand Prix have in common? Harry Bentley Bradley, the American car designer who also shaped the initial launch of Mattel’s Hot Wheels line, designed them both. In 2011 Harry teamed up with master builder Dave Crook, who built this re-imagined Pontiac Grand Prix following his detailed sketches. 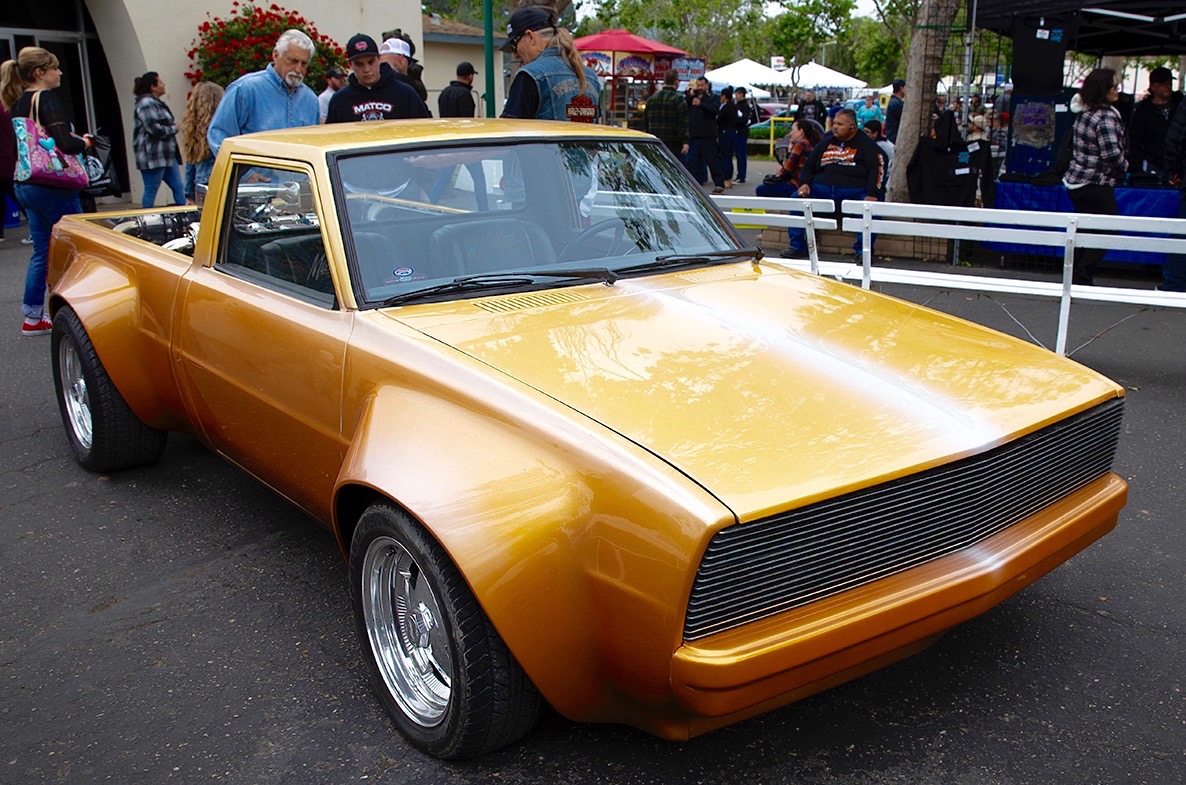 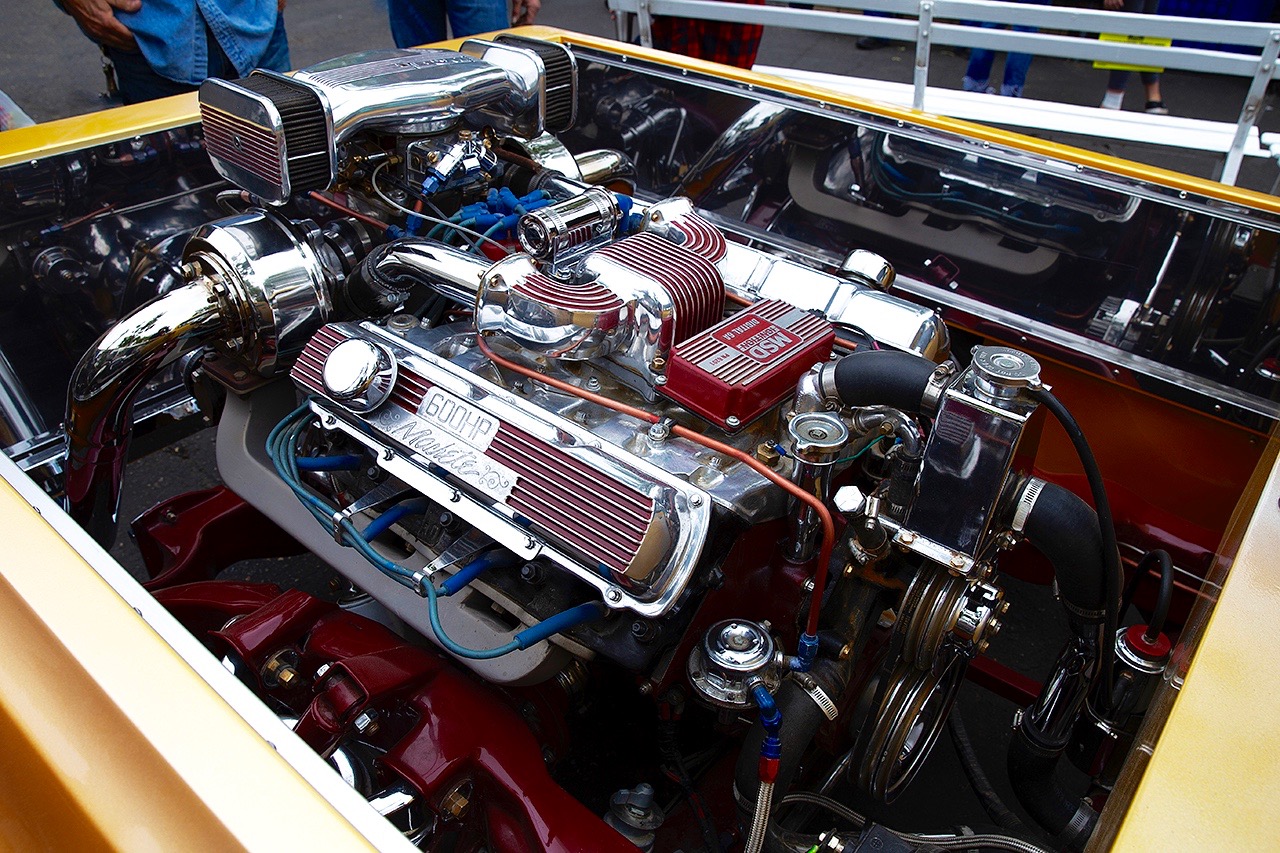 This rad pickup started life as a scrappy ‘80 Dodge D50. Then Nick Gutknecht and Gene Winfield got busy – hacking, chopping, flaring and shaving – to create the “Machete” pickup. Its one job now is to haul its bed-mounted twin-turbo 600 horsepower Oldsmobile Toronado engine and drivetrain. Gene Winfield applied custom House of Kolor paint. 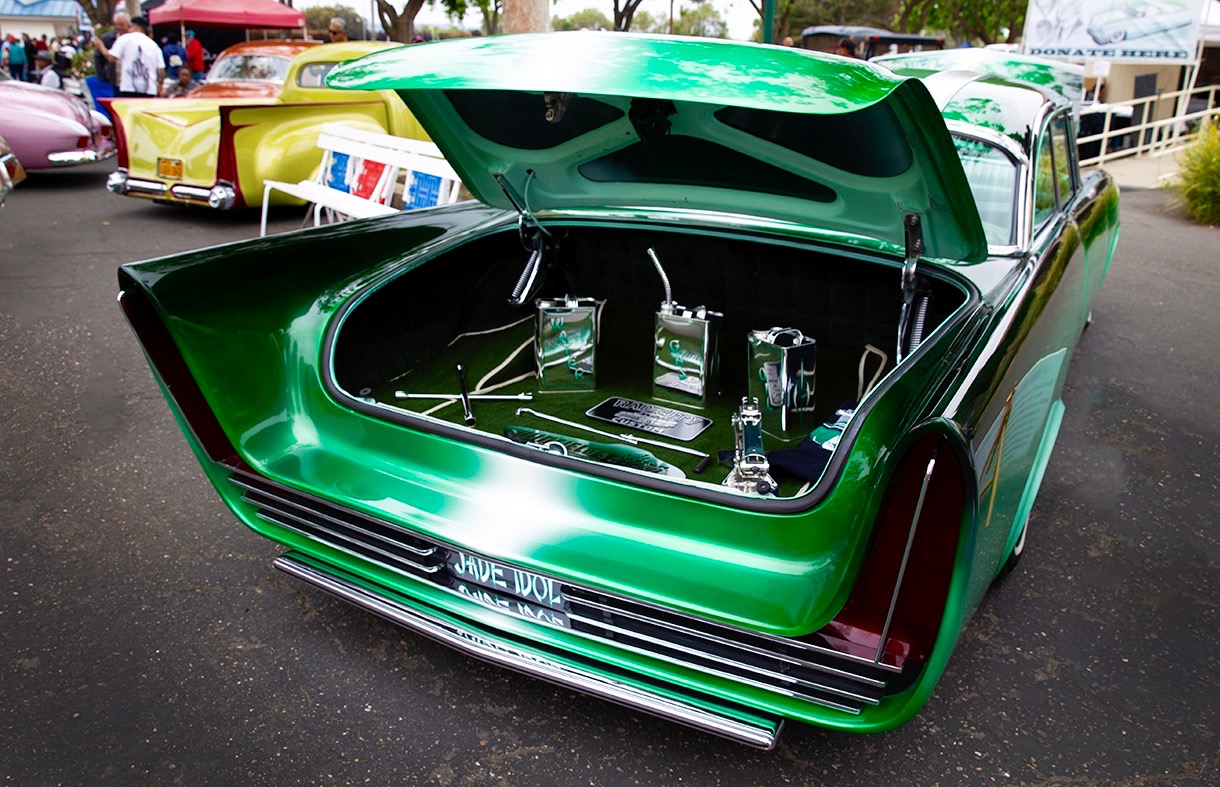 The “Jade Idol” is one of Gene Winfield’s most famous customs. Originally a ‘56 Mercury, this radical custom has undergone many updates, transfers of ownership and an extensive restoration after being wrecked when being hauled back to California from a Missouri car show. In 2017, its latest owner acquired it. He shipped it back to Winfield to recreate the original paint job he gave it in 1959! 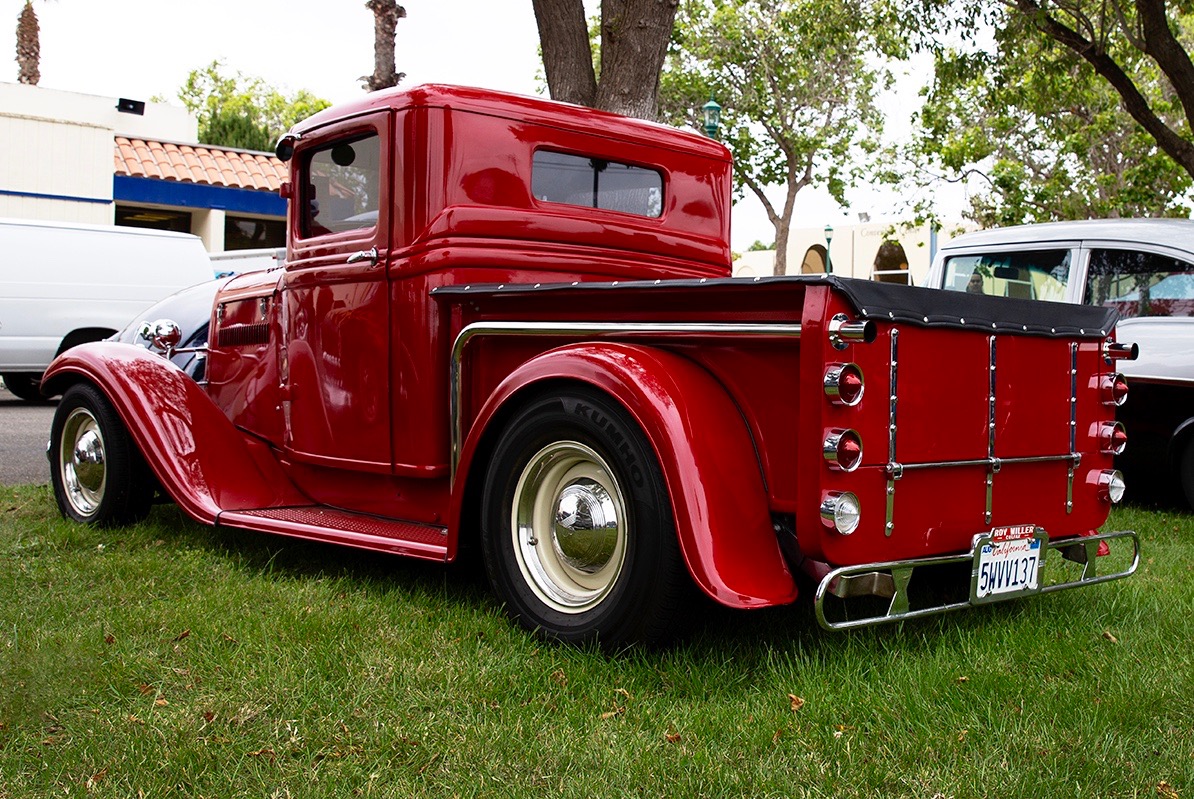 From a distance I thought the long chrome side pipes were latch or step rails for this custom ’34 Ford’s pickup bed. Upon closer inspection I discovered they were actually cleverly routed exhaust pipes with tips exiting over a vertical stack of taillights. The vertical to horizontal transition of the pipes is in perfect harmony to the pickup’s lines. 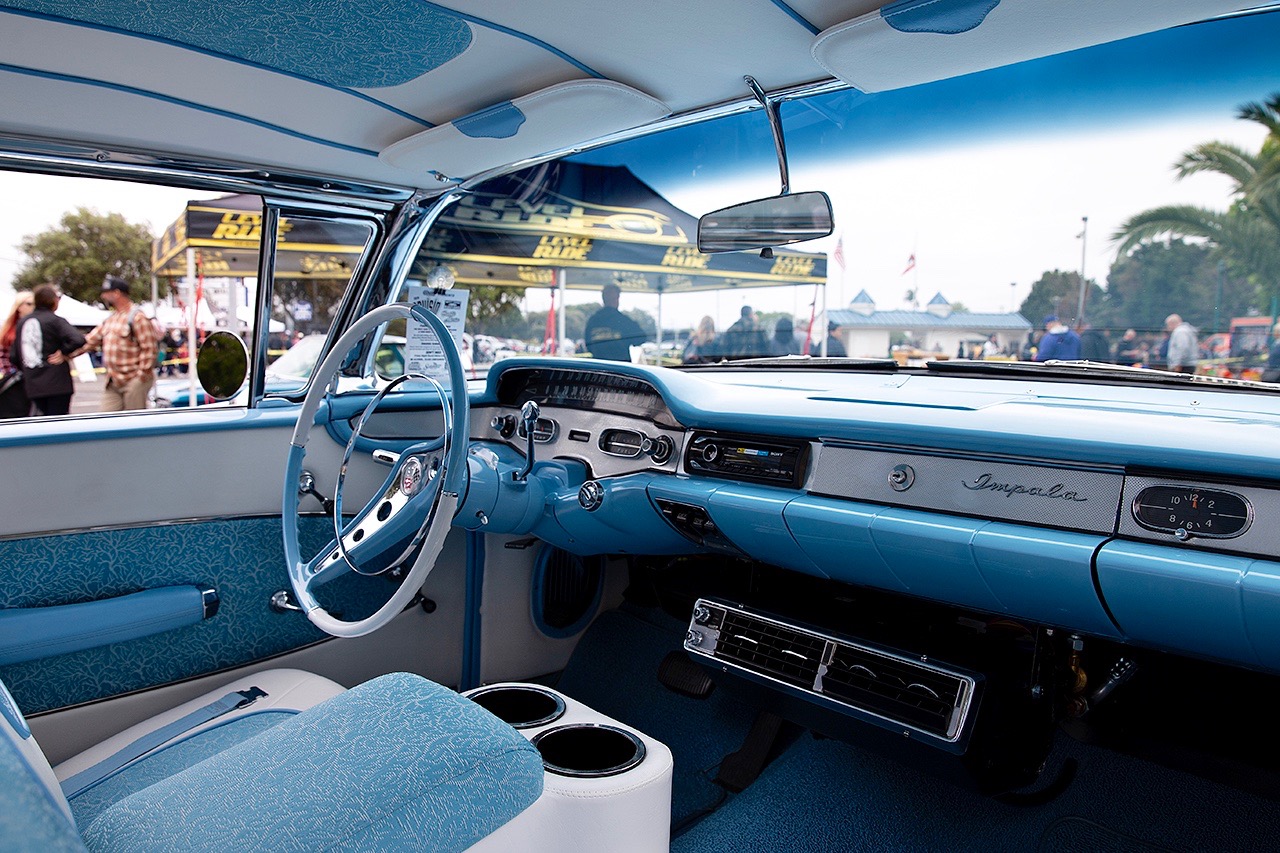 Think of this photo as our CarGuyChronicles 7th Inning Stretch! It was our chance to stretch out and relax in the Baby Blue tranquility of a plush ’58 Chevrolet Impala interior. Thank you, Jim & Ronnie Petersen, for delivering our comfort chamber all the way from Keyport, WA to Santa Maria, CA. 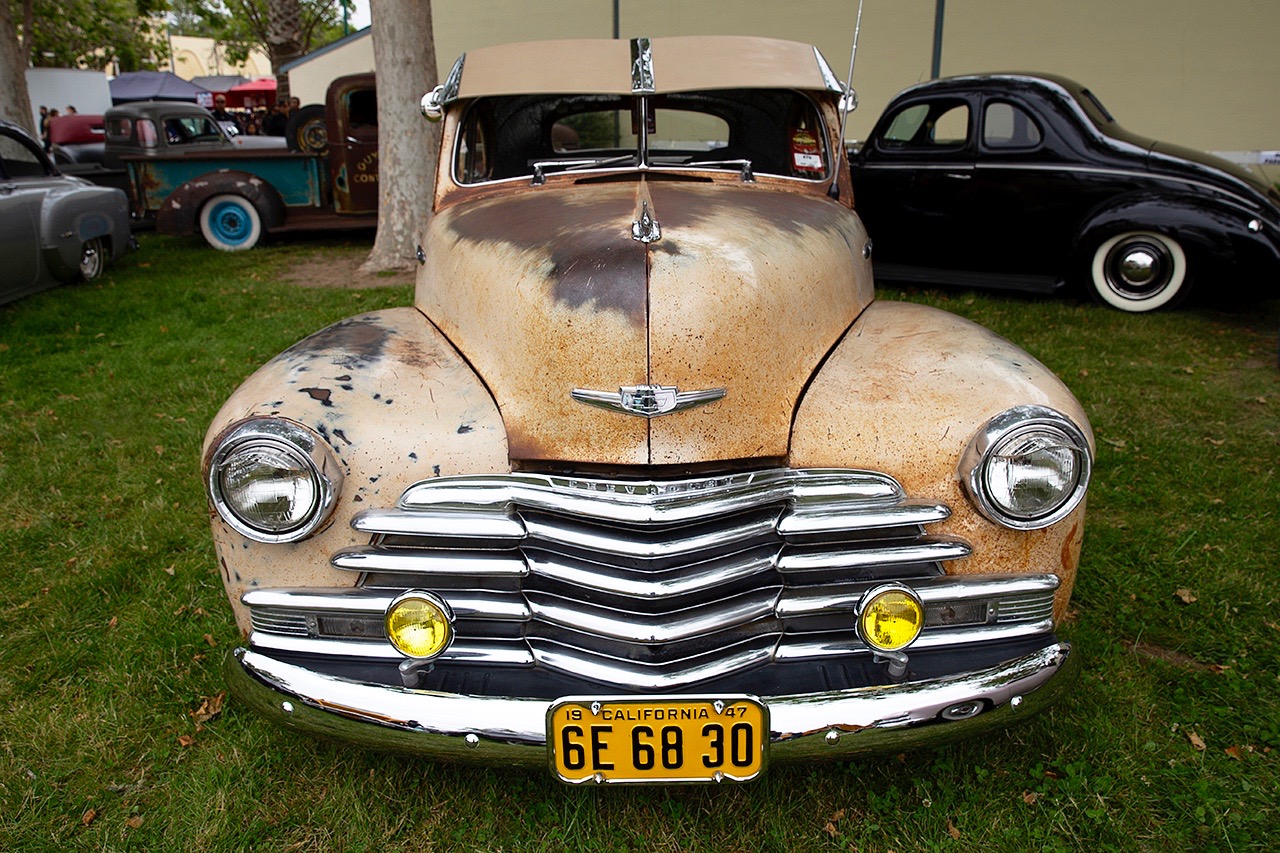 Now that we’re rested up it’s time to take a long, long journey – from 1947 – in this road-worn, rusty and trusty Chevrolet Fleetmaster coupe. The Fleetmaster was produced from 1946 to 1948 and was powered by a 216-inch Straight Six wedded to a 3-speed manual transmission. It was a popular post-war family and salesman’s transporter. 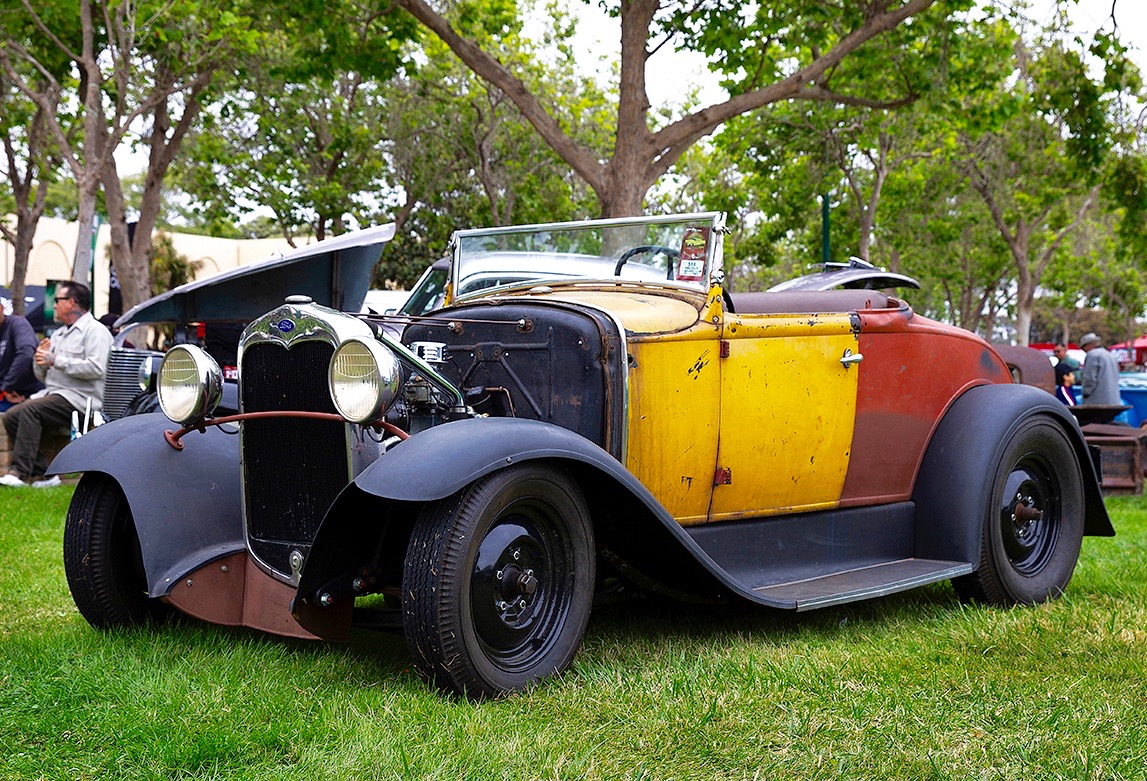 This chopped ‘31 Ford Jalopy is missing something: Maybe college students wearing raccoon coats sitting inside, or perhaps the words “California or Bust” crudely hand painted on the sides? Or just maybe, it’s perfect the way it is – unpolished and unpretentious – ready to rumble along American roads, no destination required. 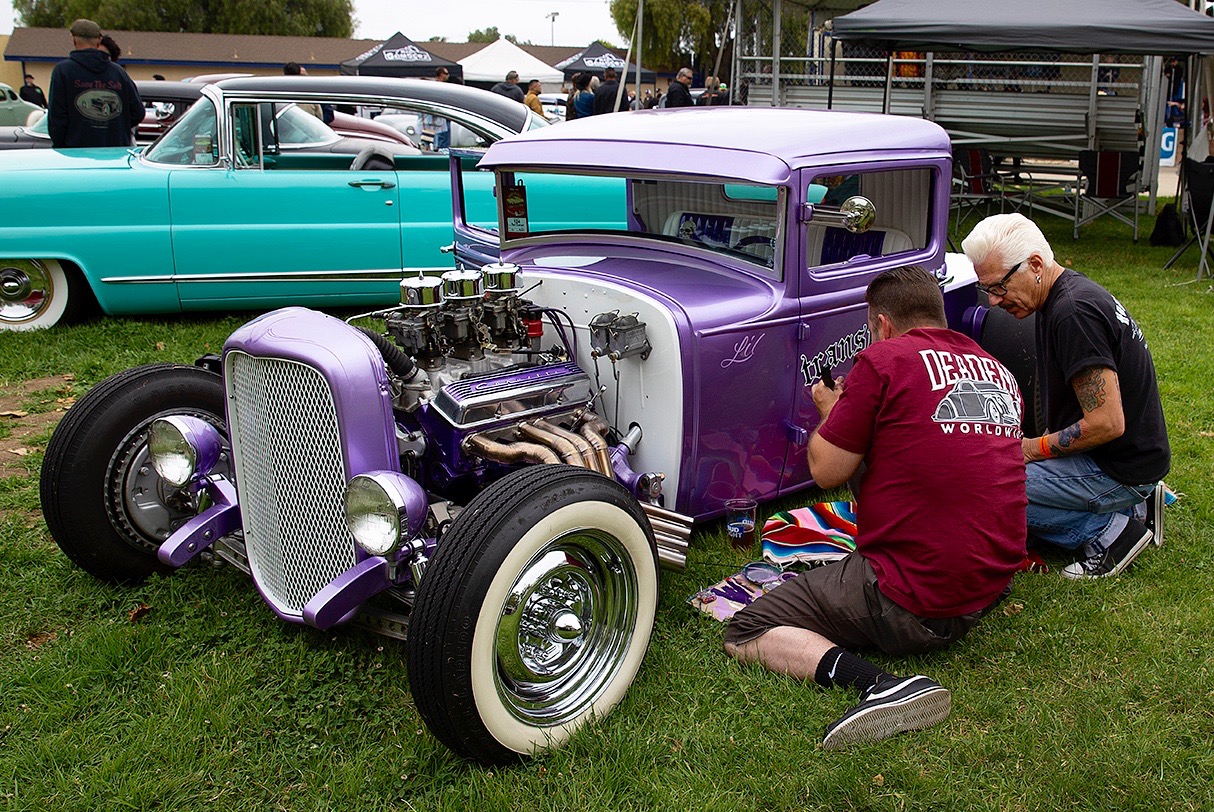 Putting finishing touches on Pat Jeter’s Periwinkle ‘31 Ford, three-window coupe – and this report – is lettering artist Grant Lippert. He’s carefully readying his squirrel hairbrush, and paints as Pat looks on. I didn’t have time to see what name would follow the just-painted “Lil”. Classic hot rod sports popular 1950s and 1960s features: Tri-carb Corvette small-block, chrome reverse wheels and whitewalls, dropped front axle and a smooth ’32 grille shell. Thinking how much I enjoyed this show and all that it offered, perhaps the name “Lil More” would be a good one for the coupe!