As summer begins to give way to fall each year, the vintage racing crowd heads to the picturesque VIRginia International Raceway in southern VA for SVRA’s Heacock Classic Gold Cup. CGC’s Mike Matune brings us highlights. 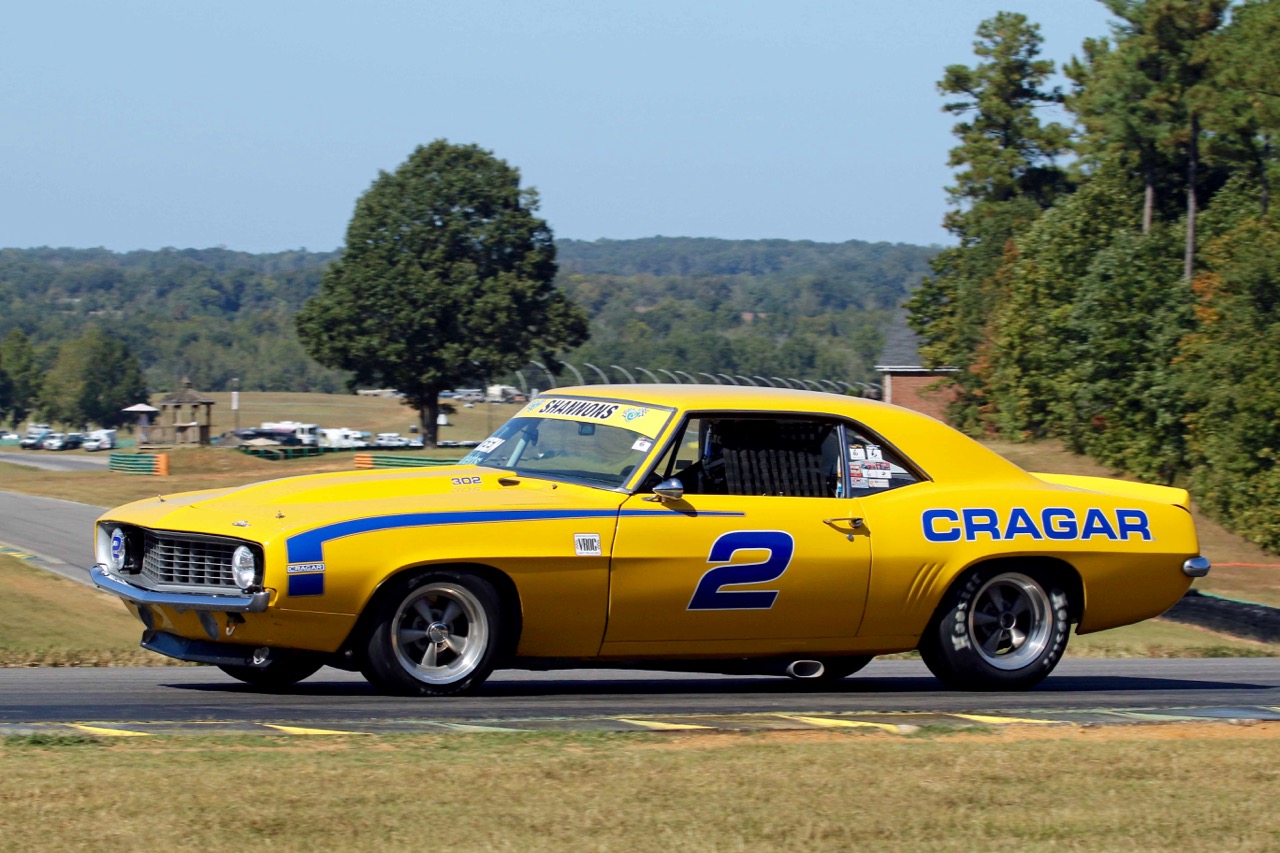 The challenging 3.27-mile-long VIR circuit welcomes all with its undulating, rolling pavement. The VIR: CLASSIC GOLD CUP! hosts a variety of activities that entertain automotive enthusiasts of all ilk and ages. Here Dave Roberts sets up for VIR’s Turn 12 before starting down the back straight in his ’69 Camaro. 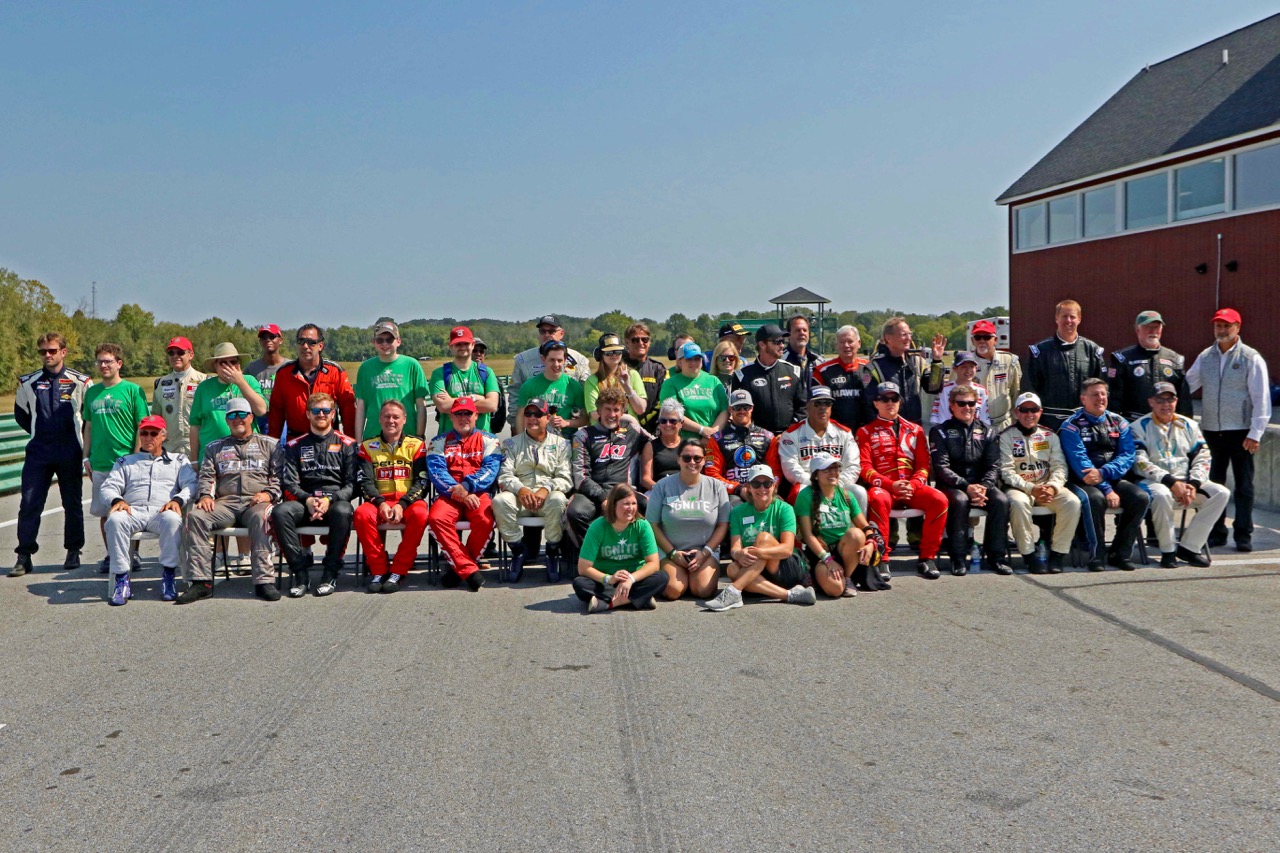 A part of SVRA’s season long vintage racing series is the Vintage Race of Champions (VROC) Charity Pro-Am presented by Chopard. The series matches up professional and amateur racers in vintage Corvettes, Cobras, Camaros and Mustangs. Fifteen teams contested the VIR round to benefit IGNITE – the Autism Society of North Carolina’s community center for young adults with high-functioning autism or Asperger’s syndrome. IGNITE was founded by The Evernham Family Racing for a Reason Foundation. Here they join VIR’s Connie Nyholm and SVRA’s Tony Parella at the pre-race festivities. 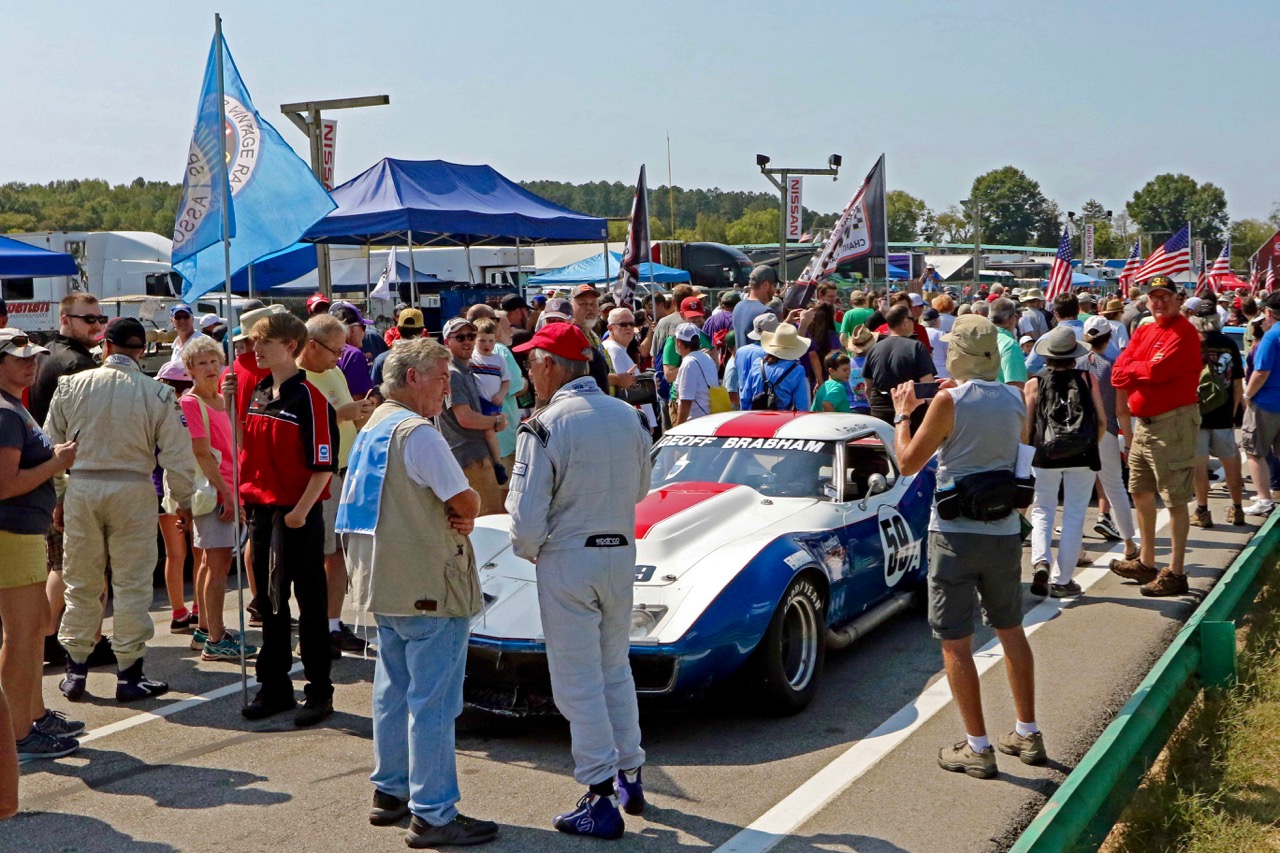 Those pre-race activities took place on pit road and included a fan walk allowing spectators to get up close and personal with the drivers and cars competing. Flags and a band added to the festive atmosphere. The crowds present in this shot bear testament to the popularity of the VROC…and vintage Corvette racecars! 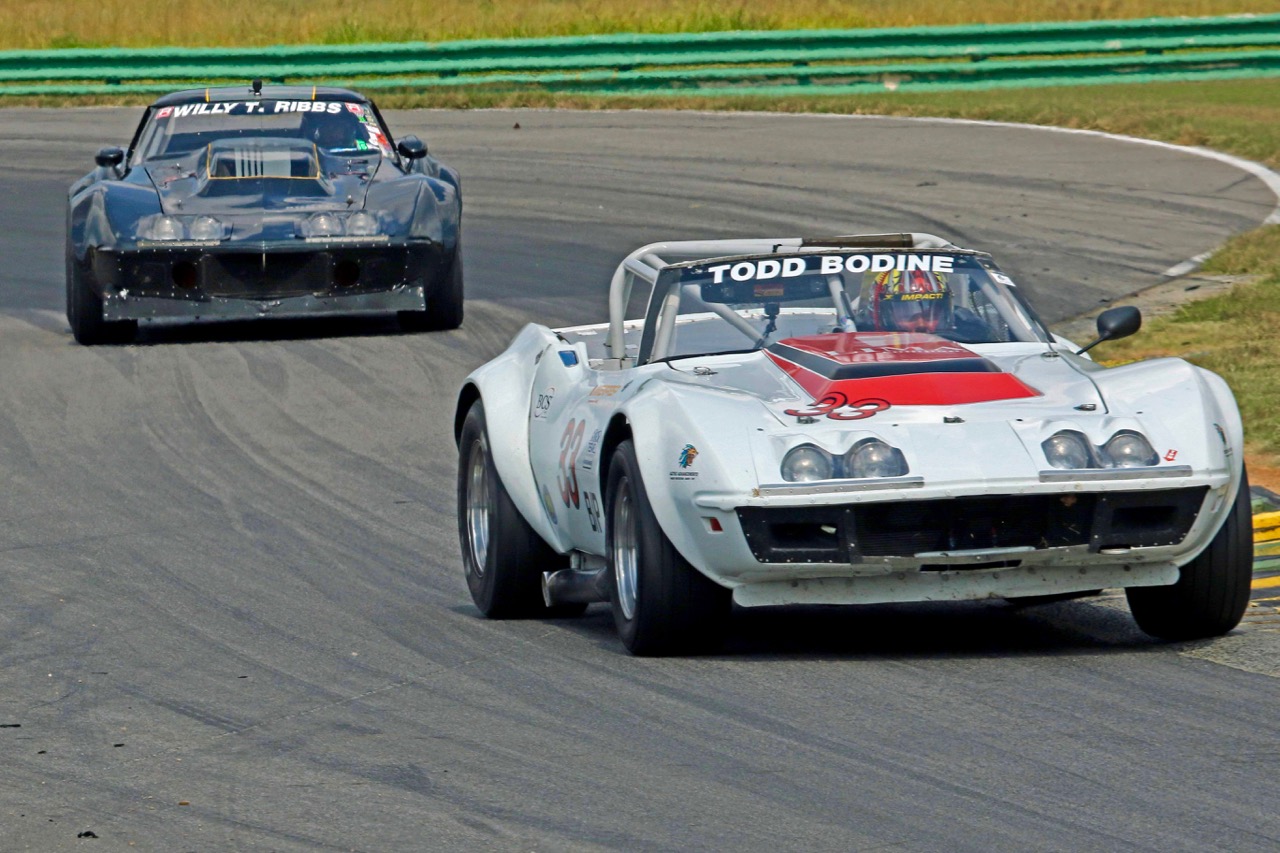 When the dust had settled, Todd Bodine and Bob Lima held off Willy T Ribbs and Edward Sevadjian for the honors, both in Corvettes. To the crowd’s delight, race action saw cars sliding through corners and pounding the curbs in the esses. 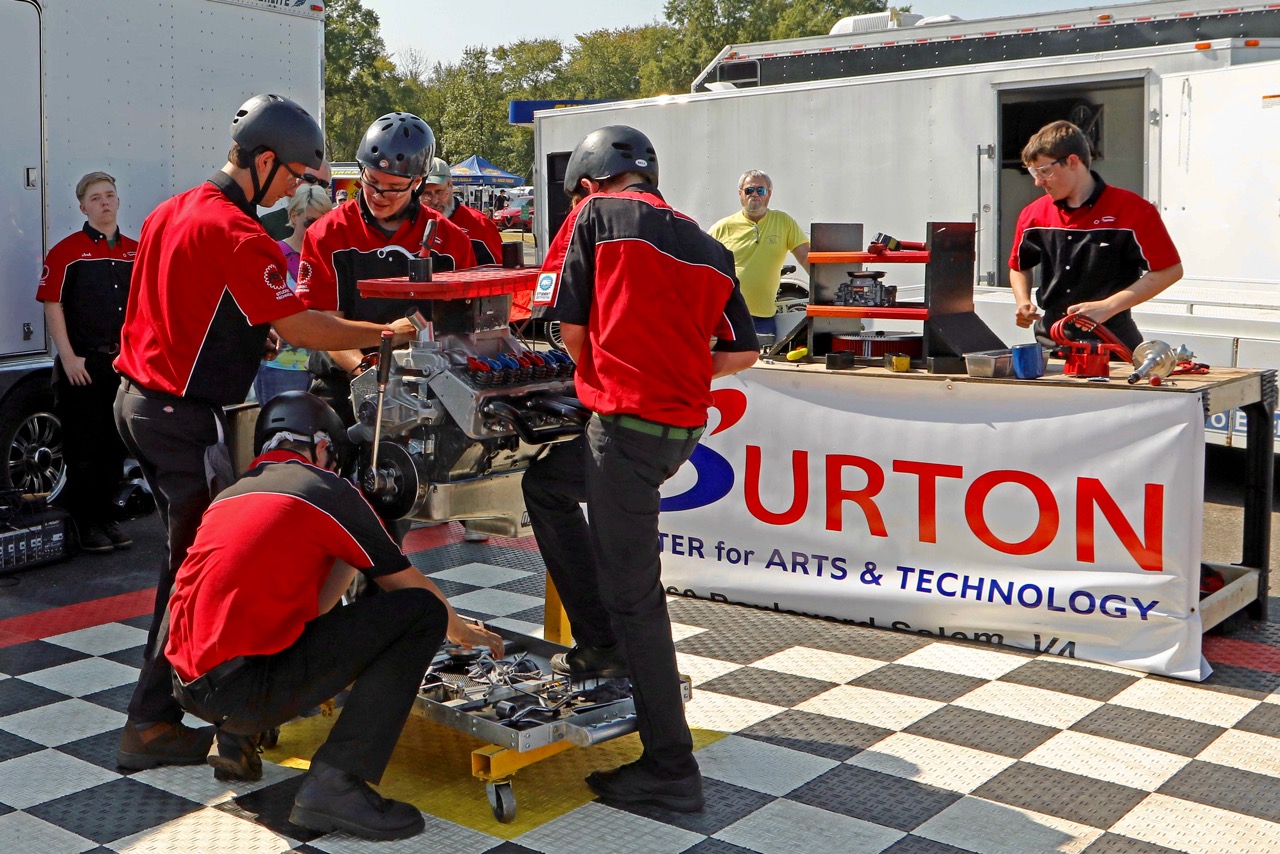 High schoolers from the Burton Center for Arts & Technology in Salem, VA demonstrated their considerable talents in the paddock. Part of the Hot Rodders of Tomorrow Engine Challenge, they compete for scholarship money in local and national competitions. The concept is simple, disassemble and reassemble a Chevy as fast as you can. The Burton team qualified fourth in the U.S. with a time of nineteen minutes, thirty-seven seconds. These are the next Car Girls/Guys; good to see our hobby is in good hands. Watch the video on the site; it is very interesting: http://www.hotroddersoftomorrow.com/default.htm 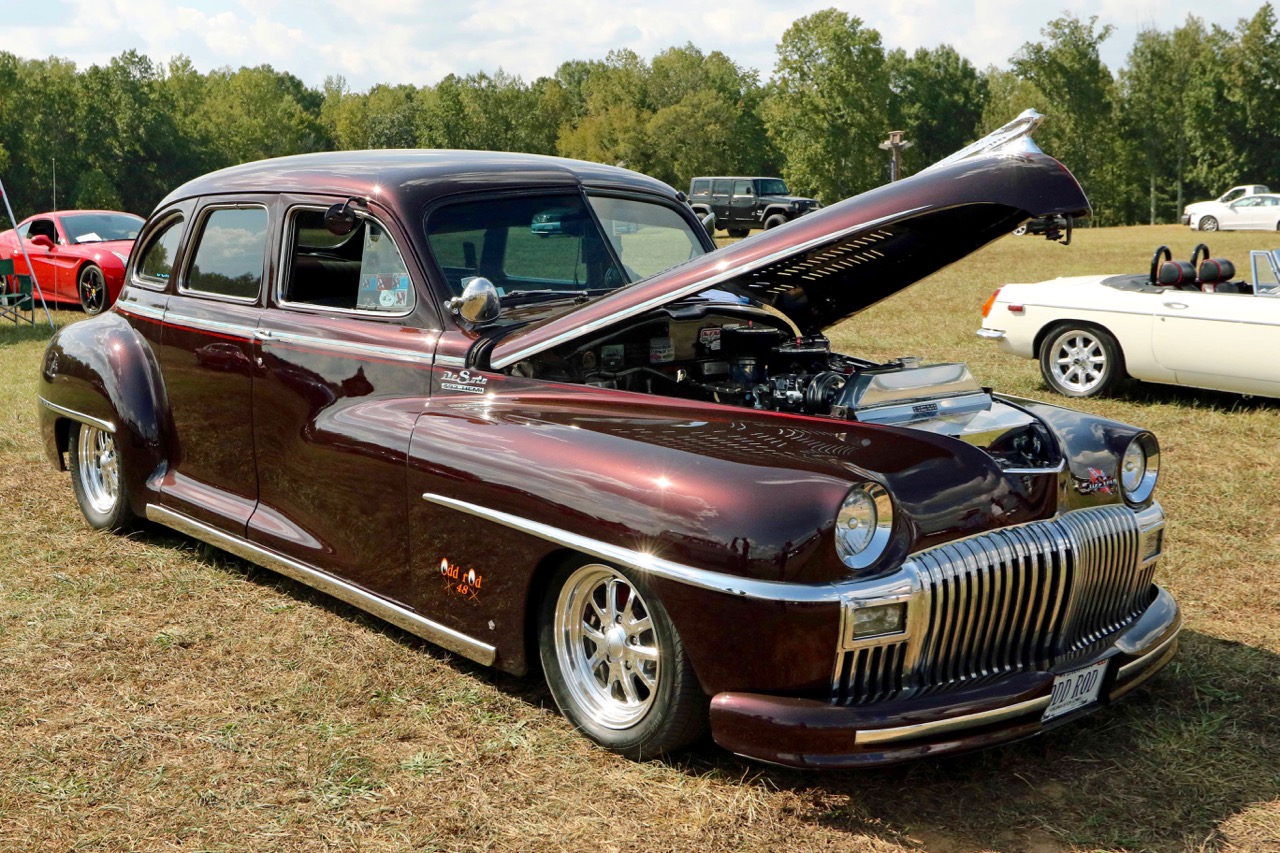 While racecars rush around VIR, there is a little serenity at the Hagerty Insurance Cars & Caffeine staged on the infield. This is a car show in every sense of the word, presenting an eclectic mix of cars. 2788 – The Odd Rod exemplifies the variety. Starting with a ‘48 DeSoto sedan, custom touches included frenched headlights, louvered hood, chrome spots on the cowl and peep mirrors. Under hood is a dual-quad 392-inch Hemi. The fit and finish rivaled many Concours cars. 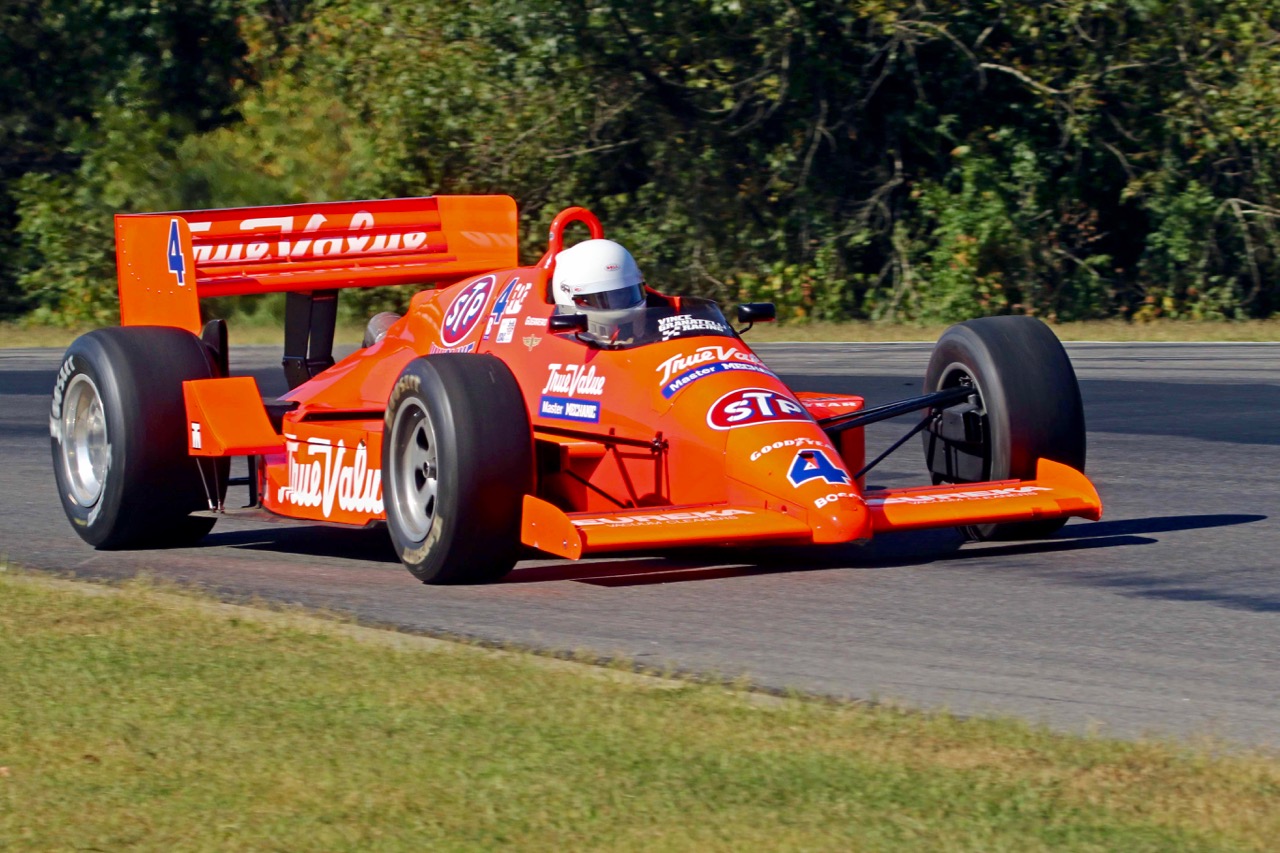 In 1987 Andy Granatelli’s son, Vince bought Dan Cotter’s True Value Indy team. With Columbian Roberto Guerrero driving, the team would score two wins that year in this March 87C, one at Mid-Ohio, with a second win coming at Phoenix. Today Patrick Bennett owns it. In a nod to maintenance ease and reliability, a naturally aspirated 358-inch Chevy replaces the original turbocharged Cosworth DFZ. 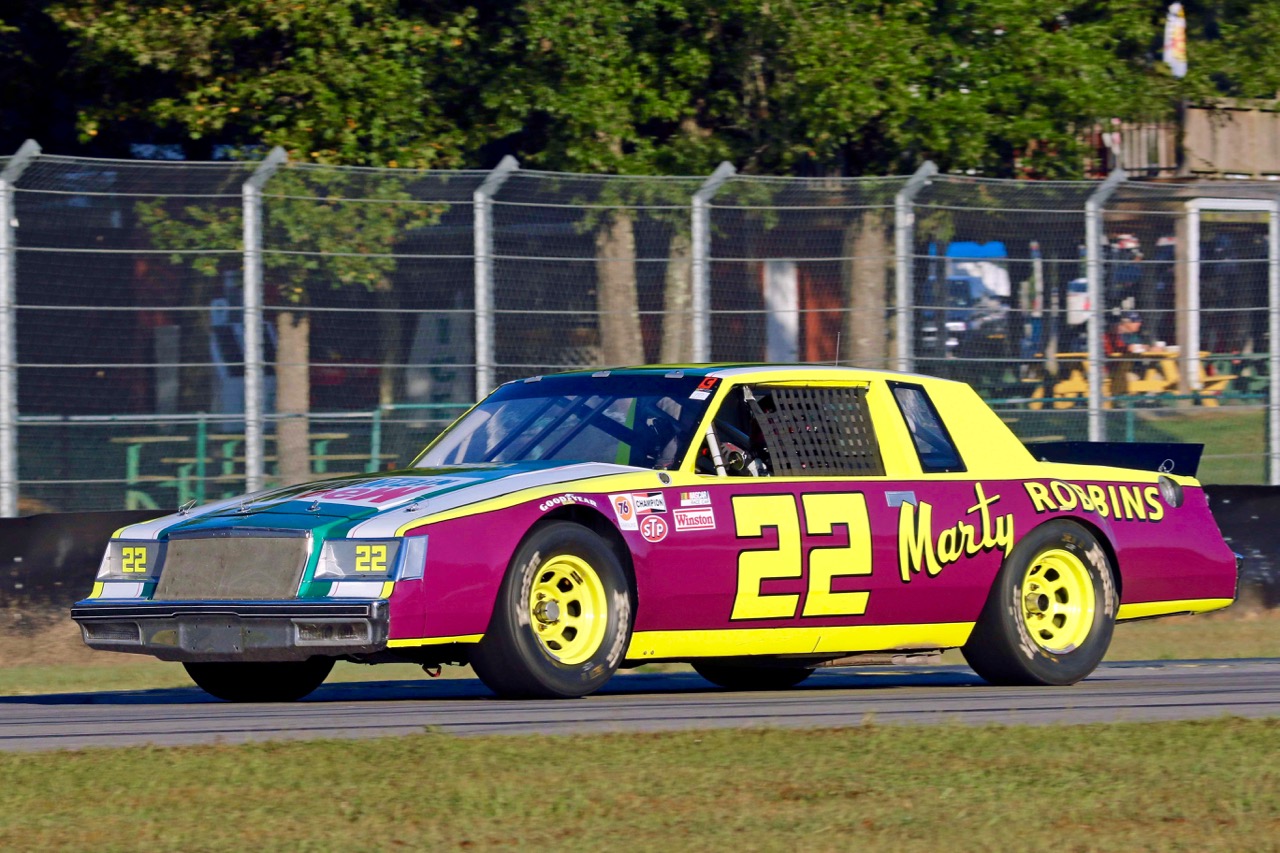 Country & Western star Marty Robbins was also a NASCAR racer. In 1982 he rented this Buick from Junior Johnson for his last two race appearances before his passing. The car was originally built for Daryl Waltrip. After Robbins passed away, his family donated it to The Grand Ole Opry Museum before current owner Scott Borchetta acquired it and had it restored by Ray Evernham’s shop. 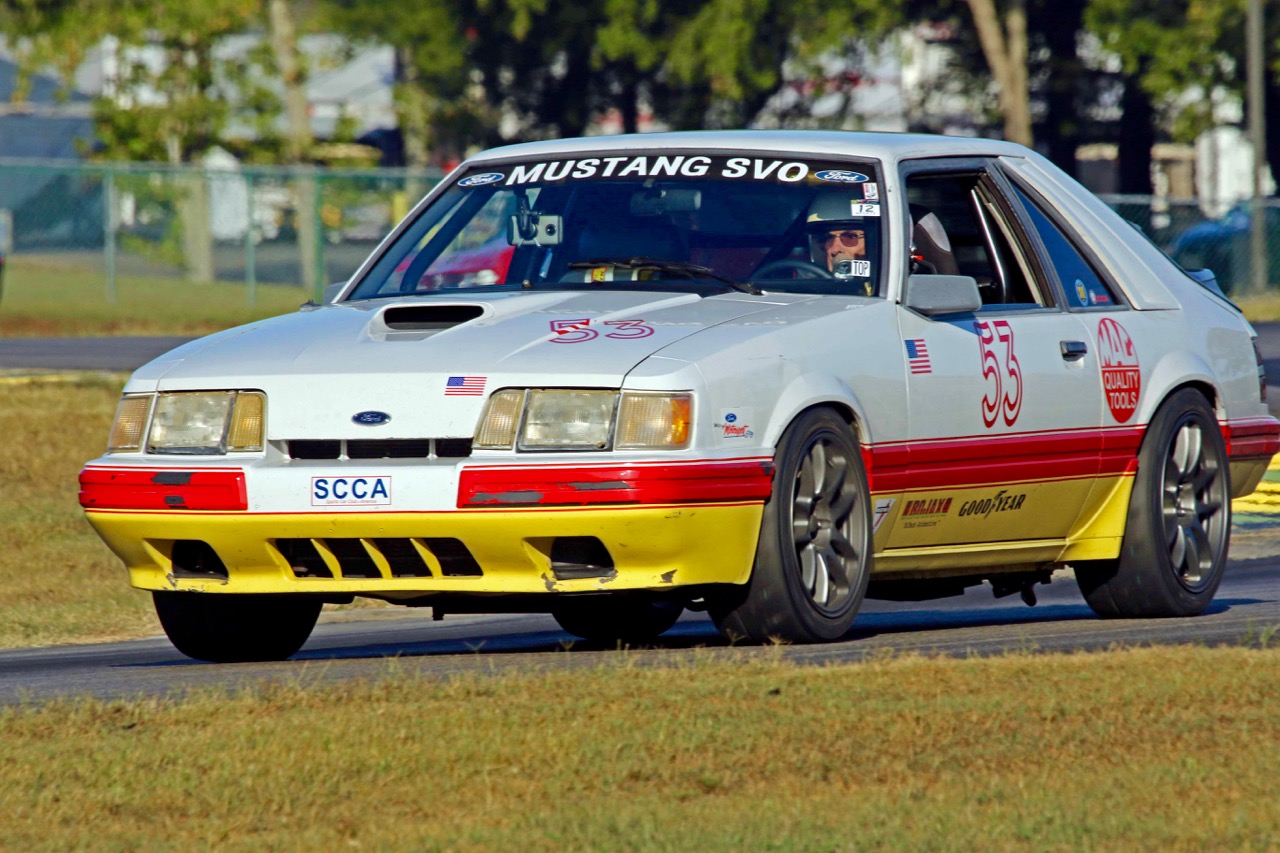 Bill Harris brought his unusual 1985.5 Mustang SVO racer. It represented Ford’s idea of internationalizing the Mustang. Exterior refinements included a dual-plane rear spoiler and a NACA hood scoop to feed the turbocharged, 2.3-liter, SOHC Four. Some raced in Showroom Stock in the day and Harris’ car replicates the livery used on the factory cars. 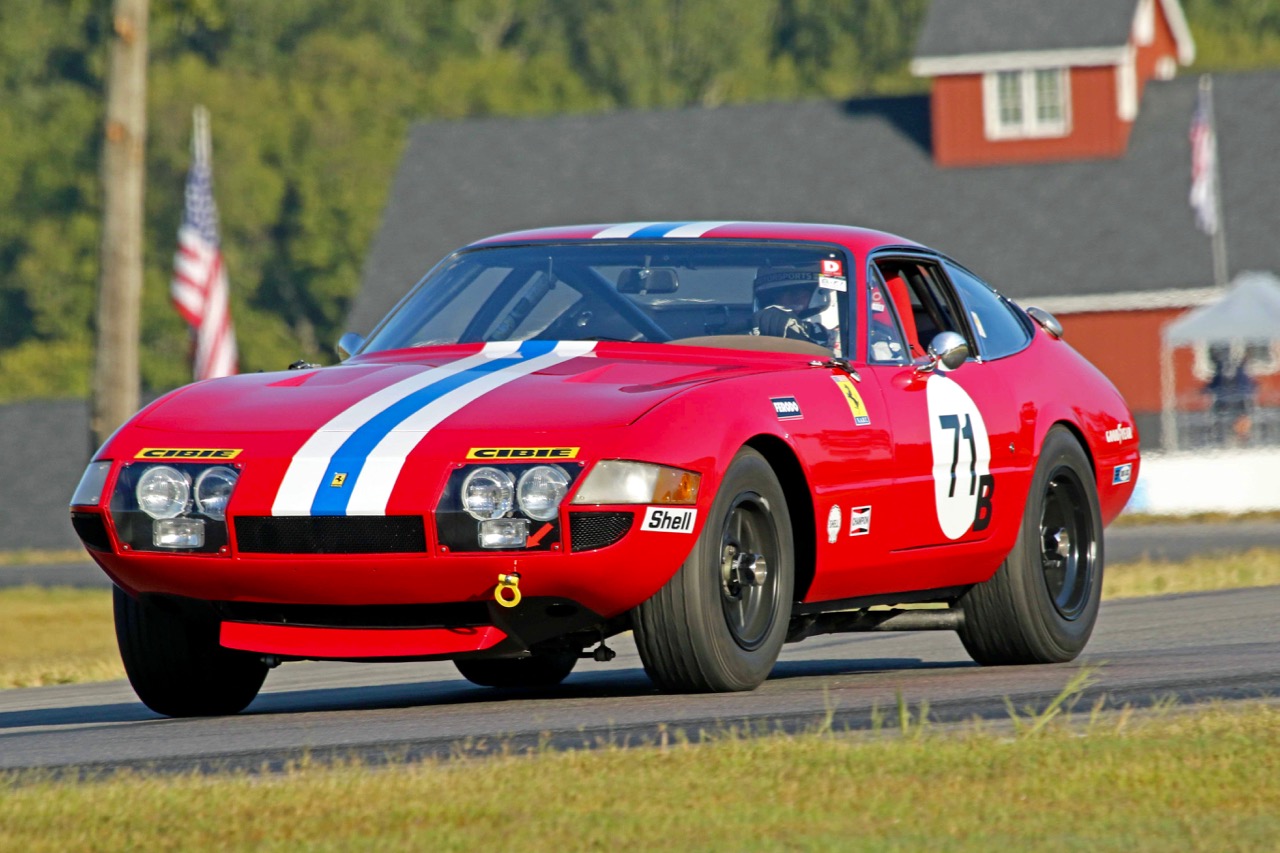 Vito Bigioni’s Ferrari 365GTB4 Daytona left the Ferrari factory intended for competition as one of four cars ordered by Luigi Chinetti’s NART for sale to privateers. Legal entanglements resulted in the car never turning a wheel in anger. Now, some 40-plus years later, it returns to it’s originally intended purpose – racing. 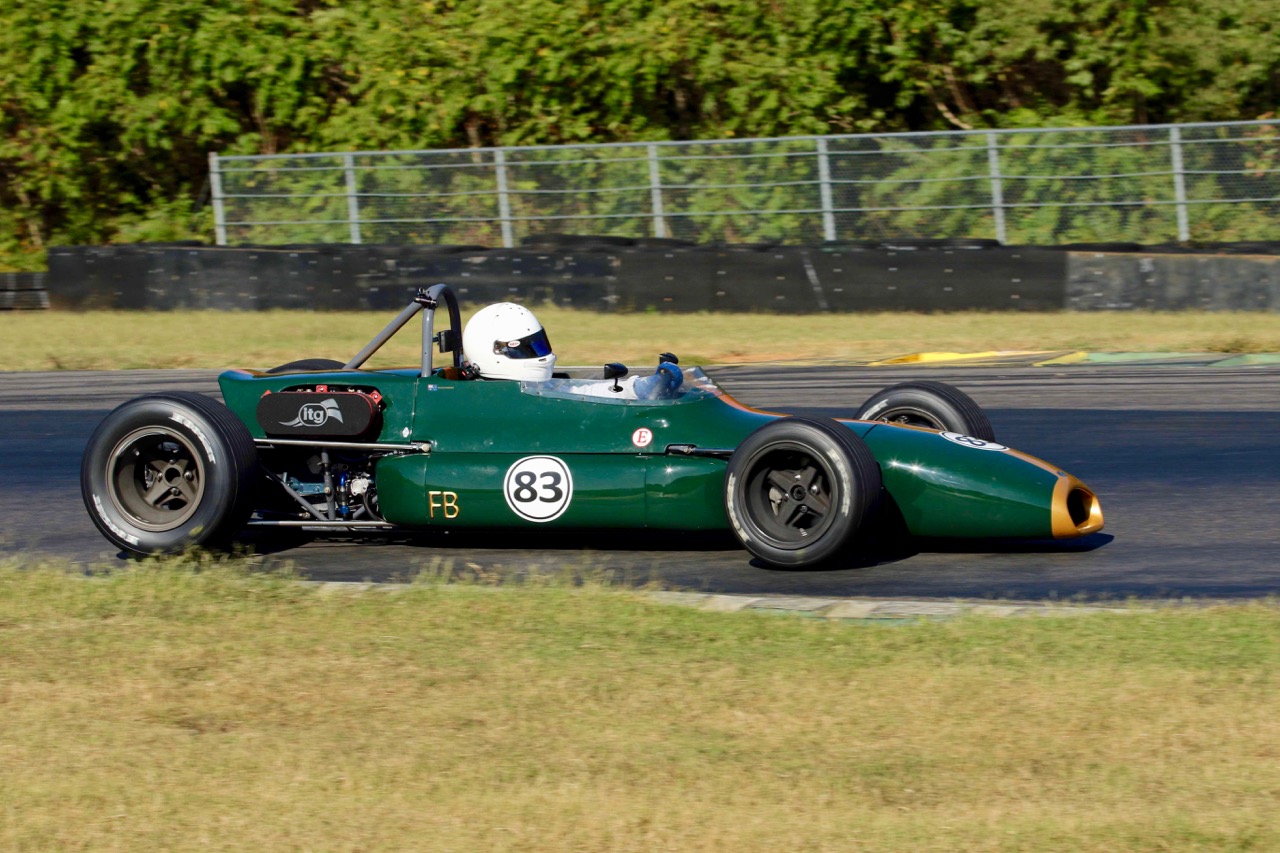 Geoff Brabham owns a very enviable racing record that includes victories and championship in Europe, the United States and Australia, driving everything from sportscars to formula cars to touring cars. Over that career, he has displayed his talents in a remarkable number of marques, but somehow, he just looks right in this Brabham BT35-31, taking the right-hander at the top of the “Roller Coaster”. 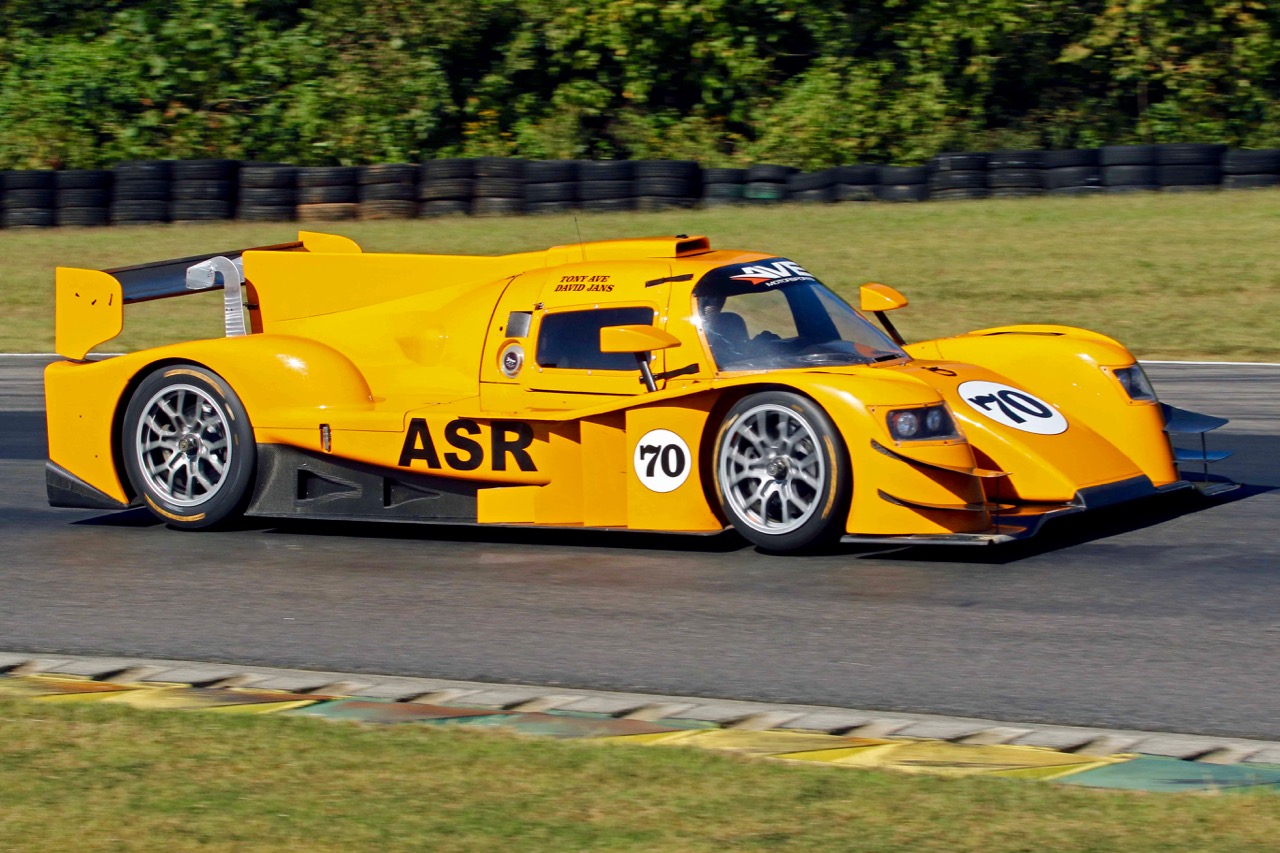 Sometimes the line between vintage racing and modern racing can get a bit blurred. Such is the case with David Jans’ Ave-Riley AR-2. A currently eligible IMSA P3 car, it competed with the fastest cars entered. A carbon fiber tub compliments an Xtrac six-speed sequential gearbox taking power from a 5.0-liter Nissan V8 making about 500 horsepower. Comparing and contrasting this car with others at VIR gave one an insight into the progress in racecar design that has occurred in a relatively short time period. 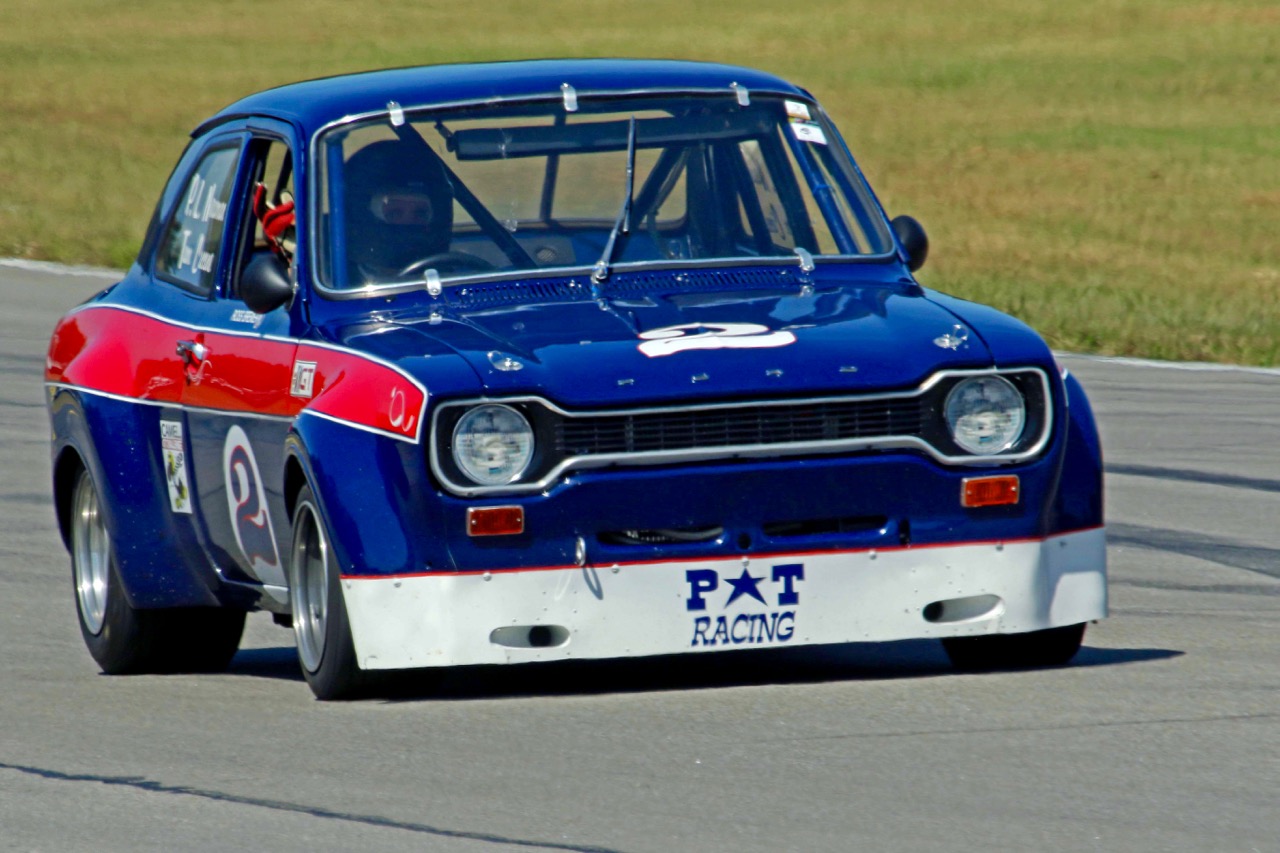 This Escort MKI RS1600 was built in England and found its way to Canada before being acquired by Tom Ciccone who raced it with co-driver P. L. Newman in a number of IMSA events in the mid-1970s. That is the origin of the PT Racing moniker on the front bumper – Paul and Tom Racing. Following its career on the east coast, it passed to Chaffey College where it competed extensively on the westc. Its history goes dark until a dealer in Texas offered it for sale to Ross Bremer. There are a couple of other twists and turns to the story, but Bremer bought it and restored it twice. Today he shows and races it frequently. 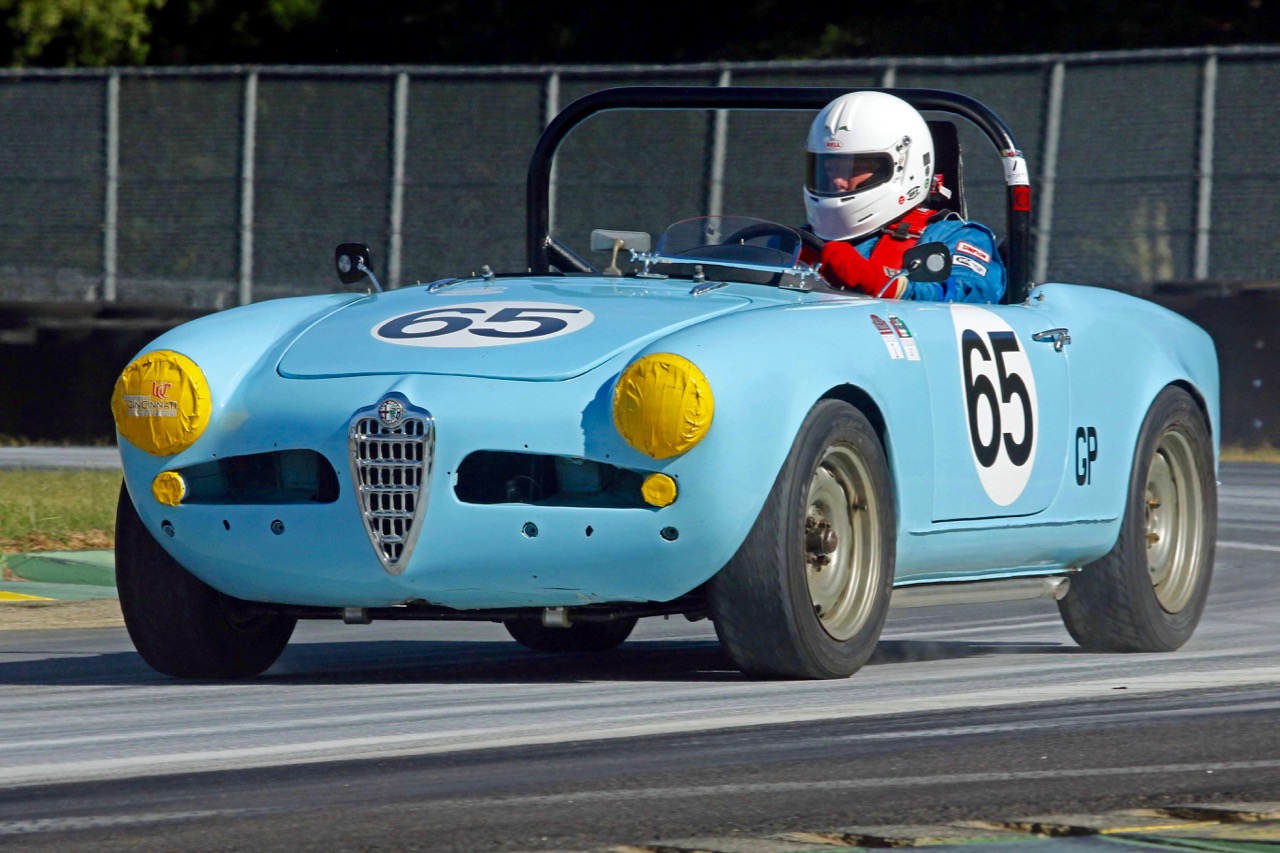 Kurt & Bill Niemeyer raced the same ‘58 Alfa Giulietta Spider their Dad and Uncle Chuck raced extensively in the midwest back in the day. Part of its legacy is participation at the first race ever staged at Mid-Ohio. The Niemeyers are family friends and my brother Tim joined us for the race. It was a fantastic weekend full of memories and camaraderie. It is the little-known stories of drivers and cars, as well as the forum for sharing that draw one to vintage racing.

Special thanks to Connie Nyholm, Christa Walker and Mitchell Smith for their assistance at VIR: CLASSIC GOLD CUP!