Skip to content
Our Mike Matune is trackside at one of the most anticipated events on this year’s
vintage racing calendar. 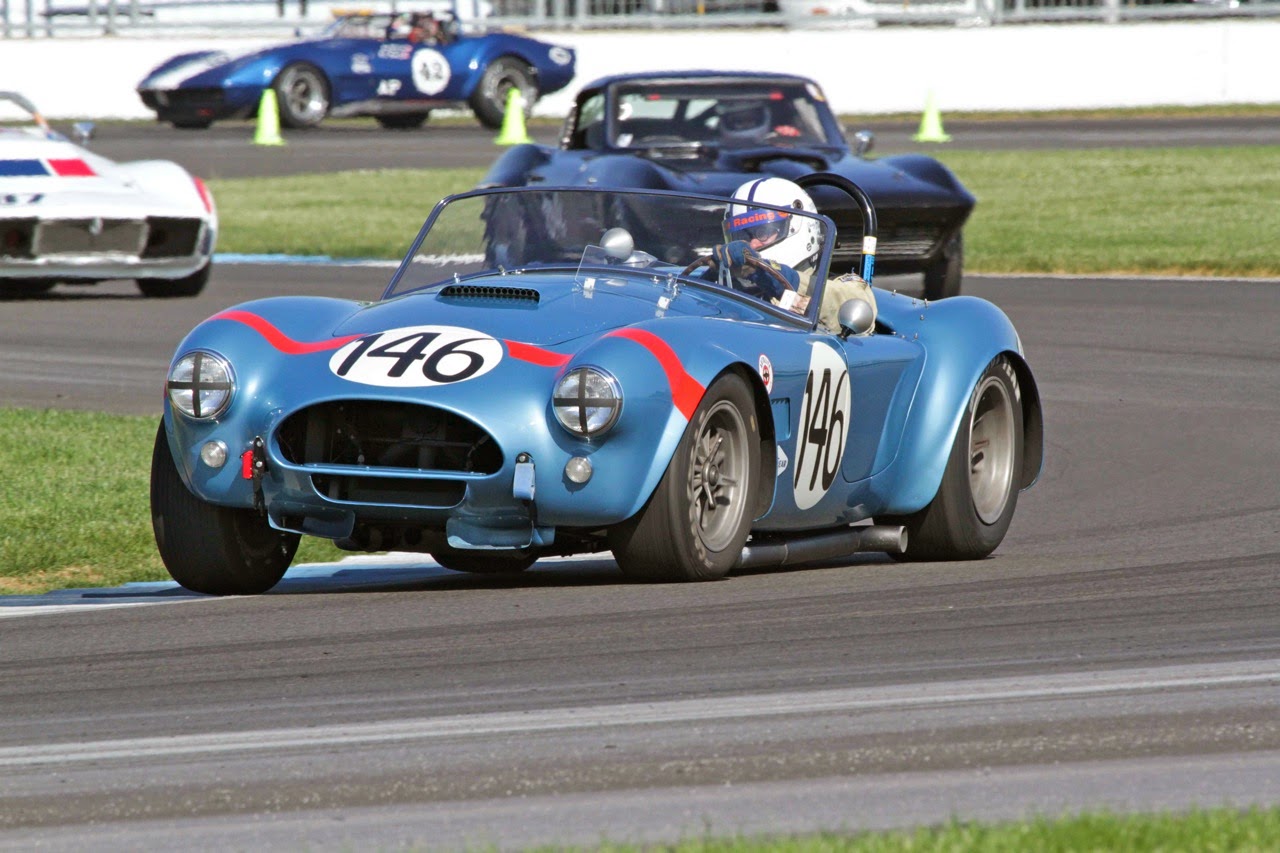 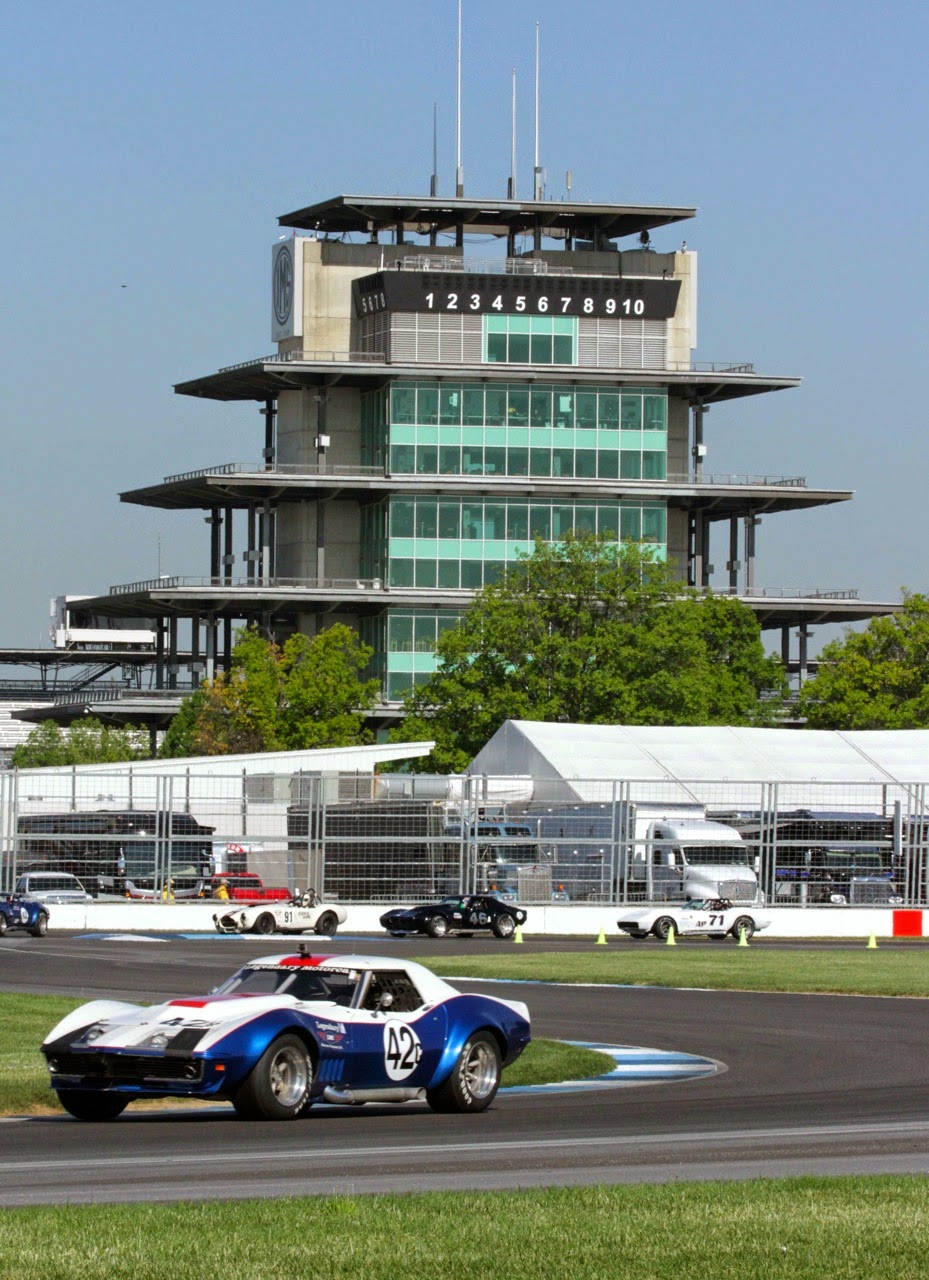 The inaugural Brickyard Vintage Invitational at the Indianapolis Motor Speedway drew a field of over 700 cars to contest three days of racing around both IMS’s road and oval courses. Rick Mooney’s ‘68 Corvette negotiates Turn 9 with the “Pagoda” in the background. The event was well received by spectators and competitors alike. This year’s race hopefully signals the birth of another major event on the historic racing calendar.

Chris MacAllister’s 289 FIA Cobra is a Shelby team car that appeared at major venues: Targa Florio, Spa and the Nurburgring with Dan Gurney, Jerry Grant and Innes Ireland sharing the driving.  Shelby and his Cobra Team would come close to wrestling the championship away from Ferrari in 1964, but politics entered the fray and the last race of the year was canceled leaving Ferrari’s thin margin in the Championship to stand. It would all come good for the Californians the next year! 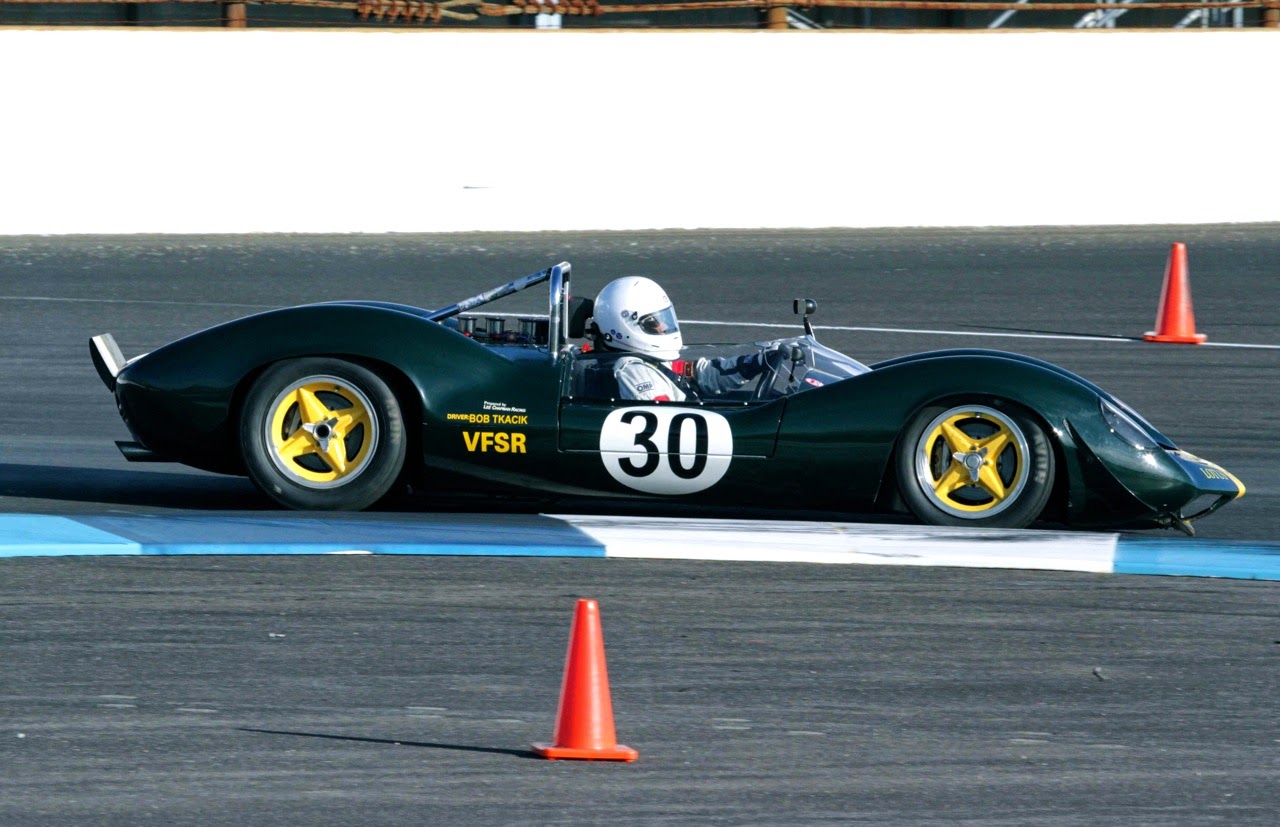 Bob Thacik in his 289 Ford powered Lotus 30 drops down from the oval onto the infield road course. The Lotus 30 was an early attempt by Colin Chapman to build a big-engined sports racer. These were coming into vogue at the time as interest in the USRRC & Can-Am was beginning to grow. Unfortunately it was not one of Lotus’ more successful efforts. Thacik’s car sports a number of modifications to make it more competitive, safer and easier to handle. 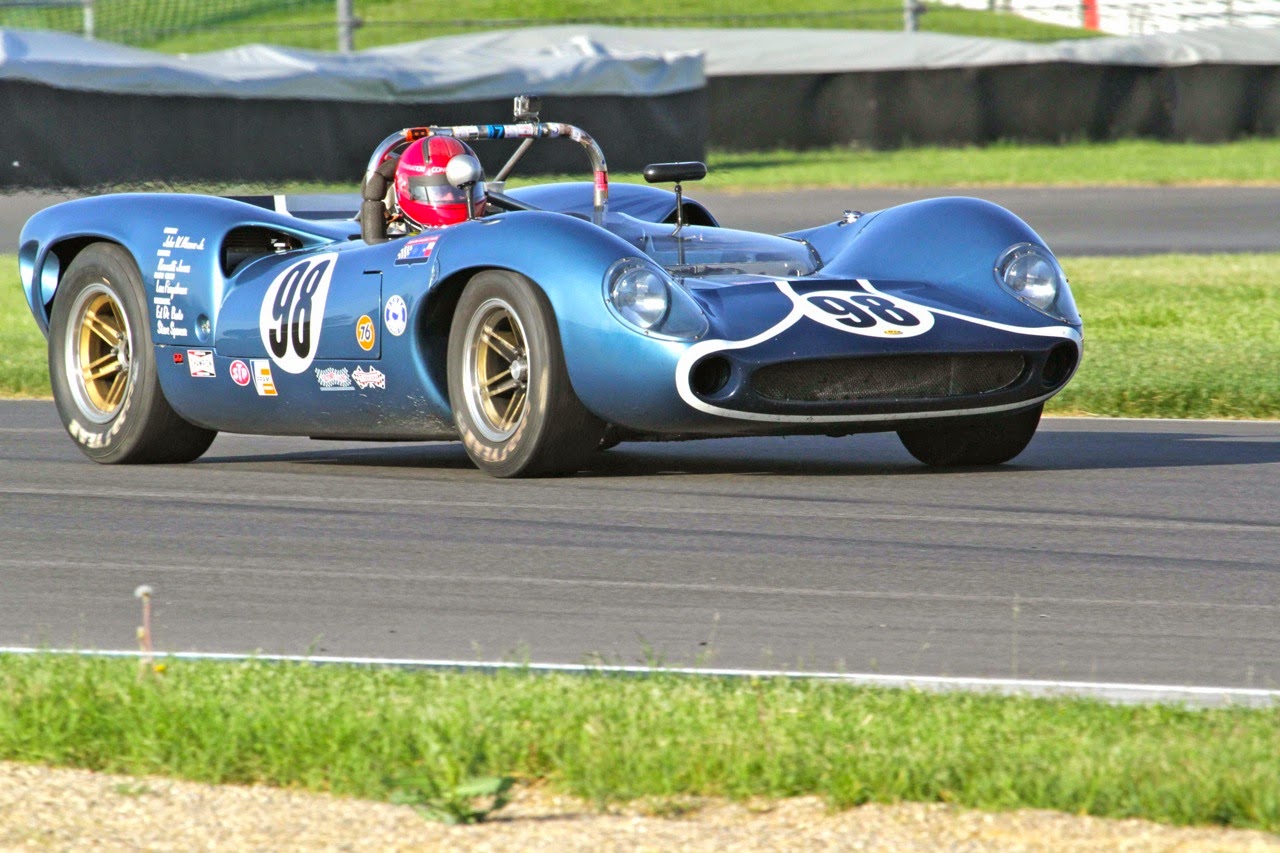 David Jacobs is at the wheel of the ex-John Mecom/Parnelli Jones Chevy-powered T70. In 1966 the Mecom/Jones Lola ran in three Can-Am events, winning a heat at the Laguna Seca round. 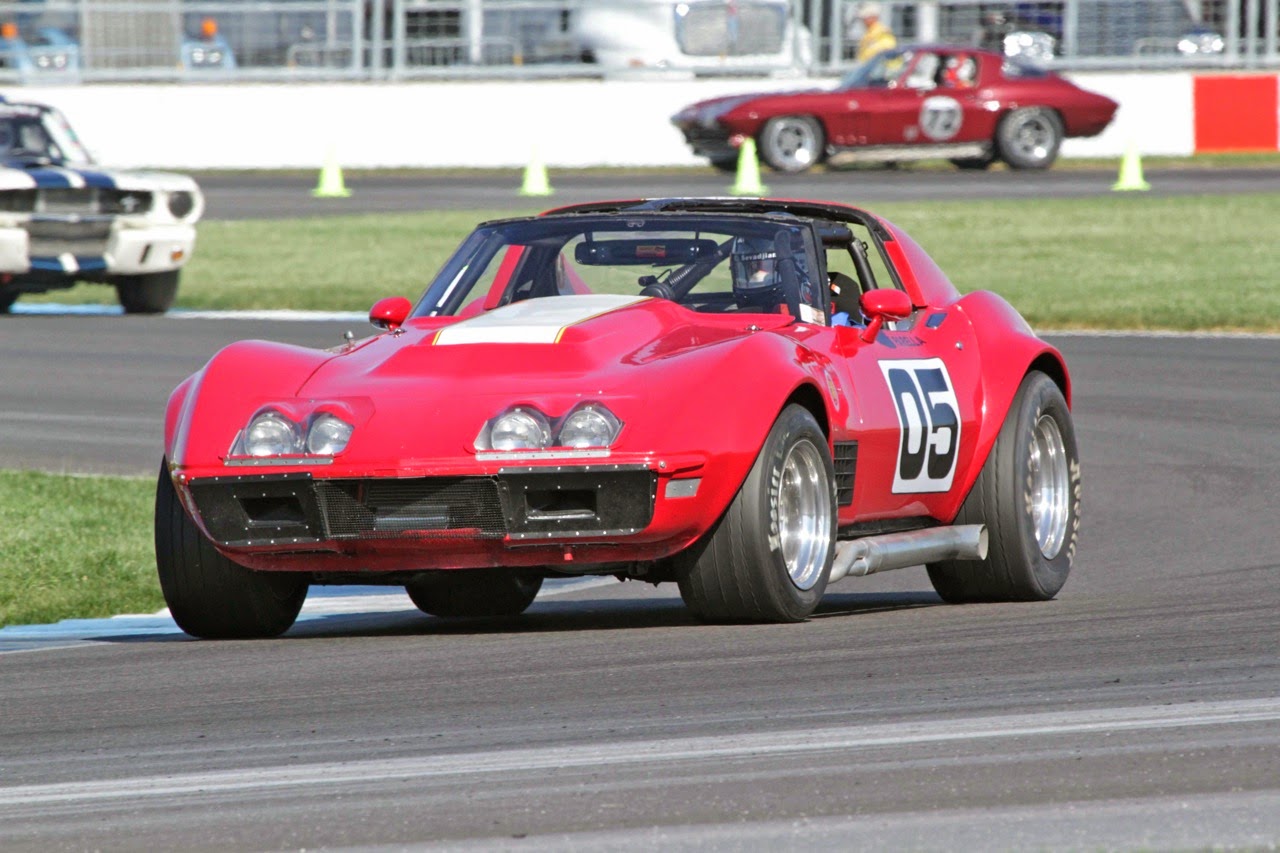 SVRA’s majordomo, Tony Parella, couldn’t resist having some fun at the event himself. Here he’s hustling his ‘72 Corvette through the twisty bits after the back straight before climbing back up on the oval. Willy T. Ribbs would drive this car to a third place finish in Sunday’s Pro-Am race. Kudos to Tony and the entire SVRA & IMS Teams for a great start on what I hope will become a major stop on the vintage-racing calendar. 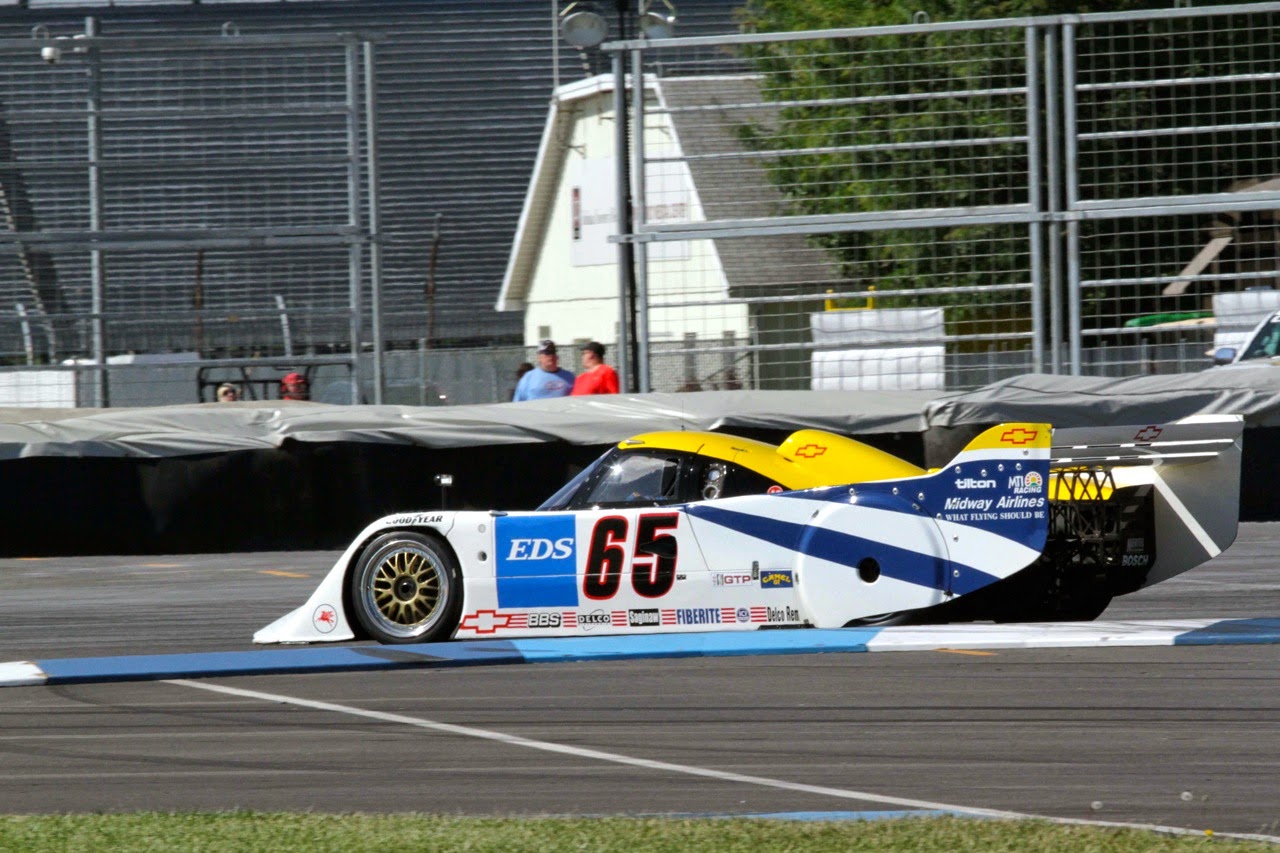 Toby Bean is caught mid-corner in his Chevrolet Intrepid GTP car. Designed by Bob Riley and built by Protofab for owner Jim Miller, the Intrepid would gain success at the hands of drivers Tommy Kendall and Wayne Taylor. The IMSA GTP days represented a high point in racing. 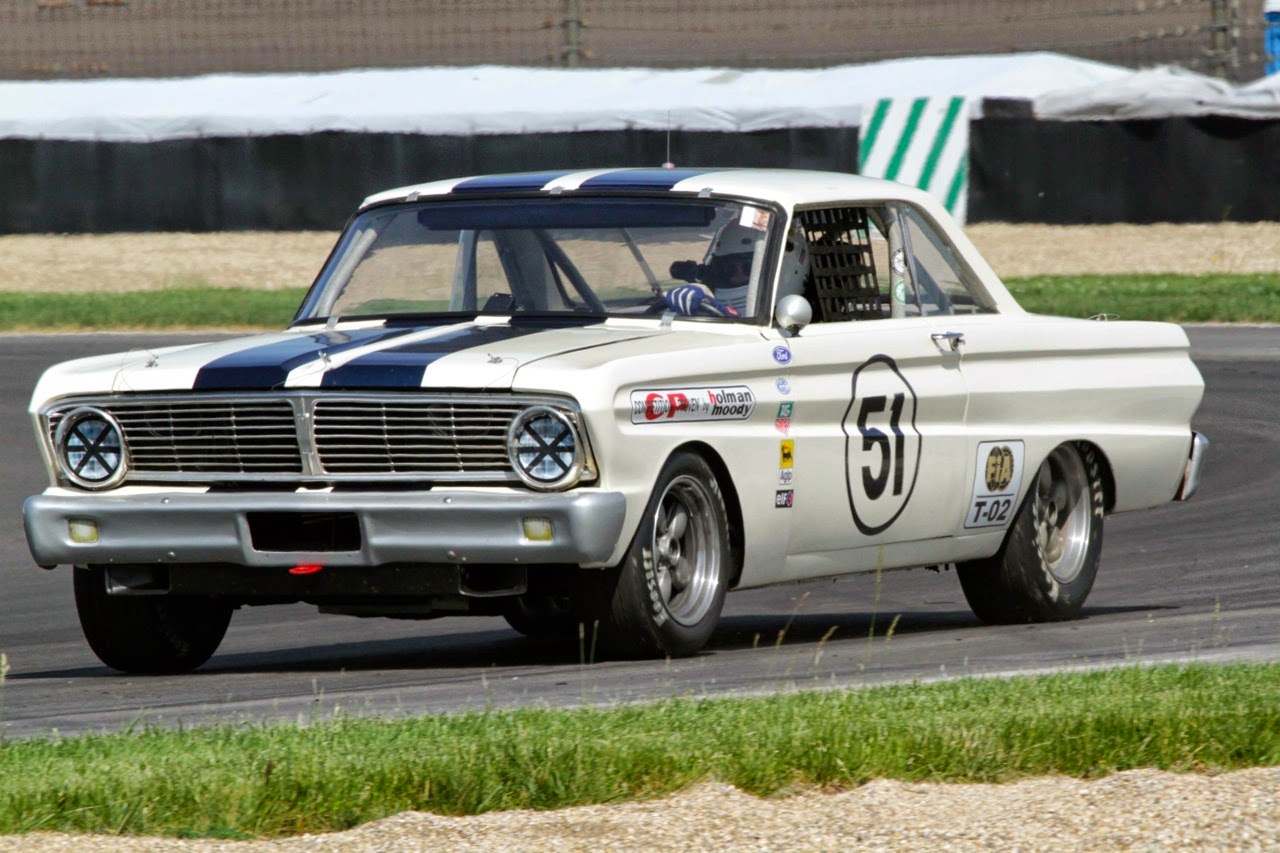 Before there were hoofs, there were wings. Before the Mustang’s introduction, Ford’s competitive weapon of choice was sometimes the Falcon. Originally conceived as an econocar, it morphed into a mini-muscle-car. Under the tutelage of Holman & Moody and others, the Falcon would see success in road racing and rallying. Bill Feaster and company traveled up from Florida to give us a taste of his Falcon’s fury. His car features an SCCA A/Sedan racing history. 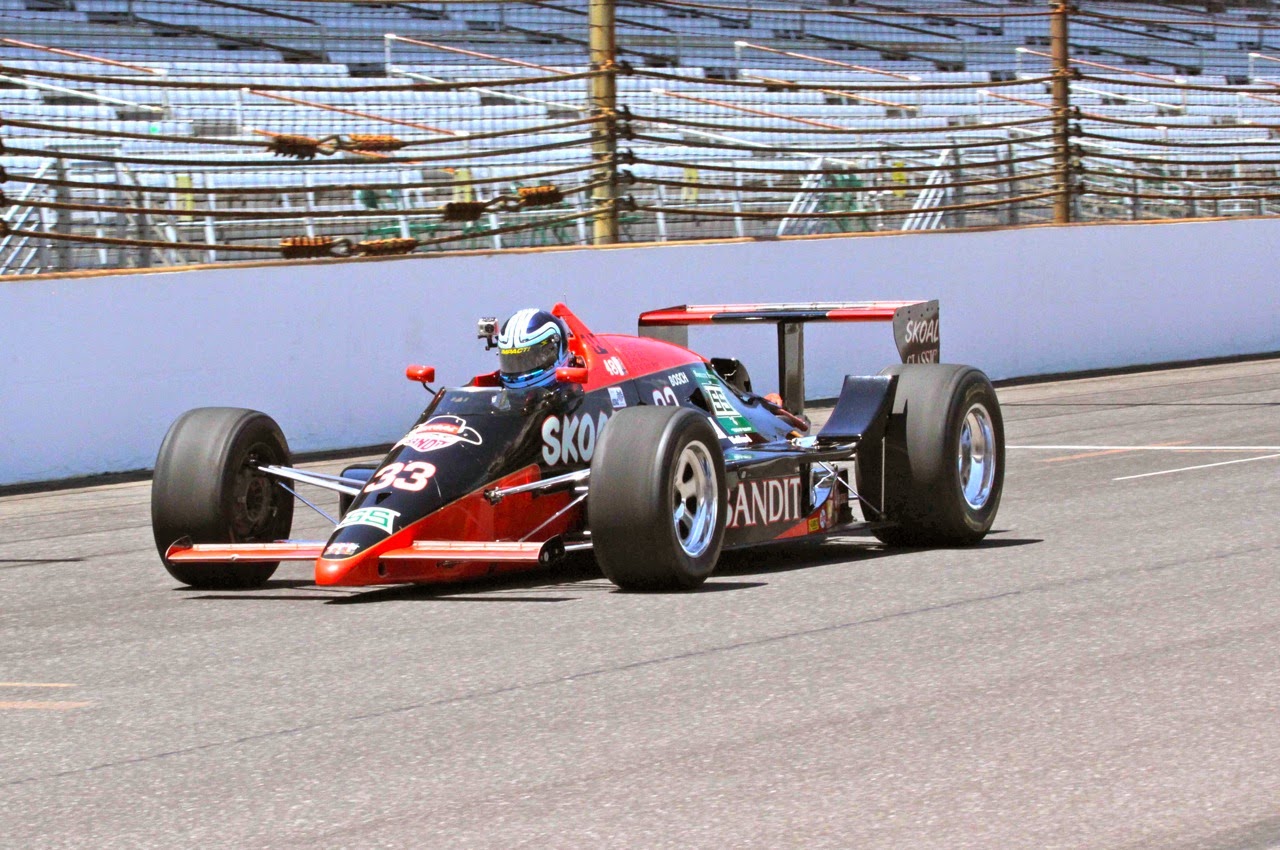 Tom Malloy looks right at home in his March 86C on the front straight during the oval track sessions. Powered by a turbocharged Cosworth V8, the March 86C would see considerable success during the mid-1980s, taking home back-to-back Indy 500 wins. 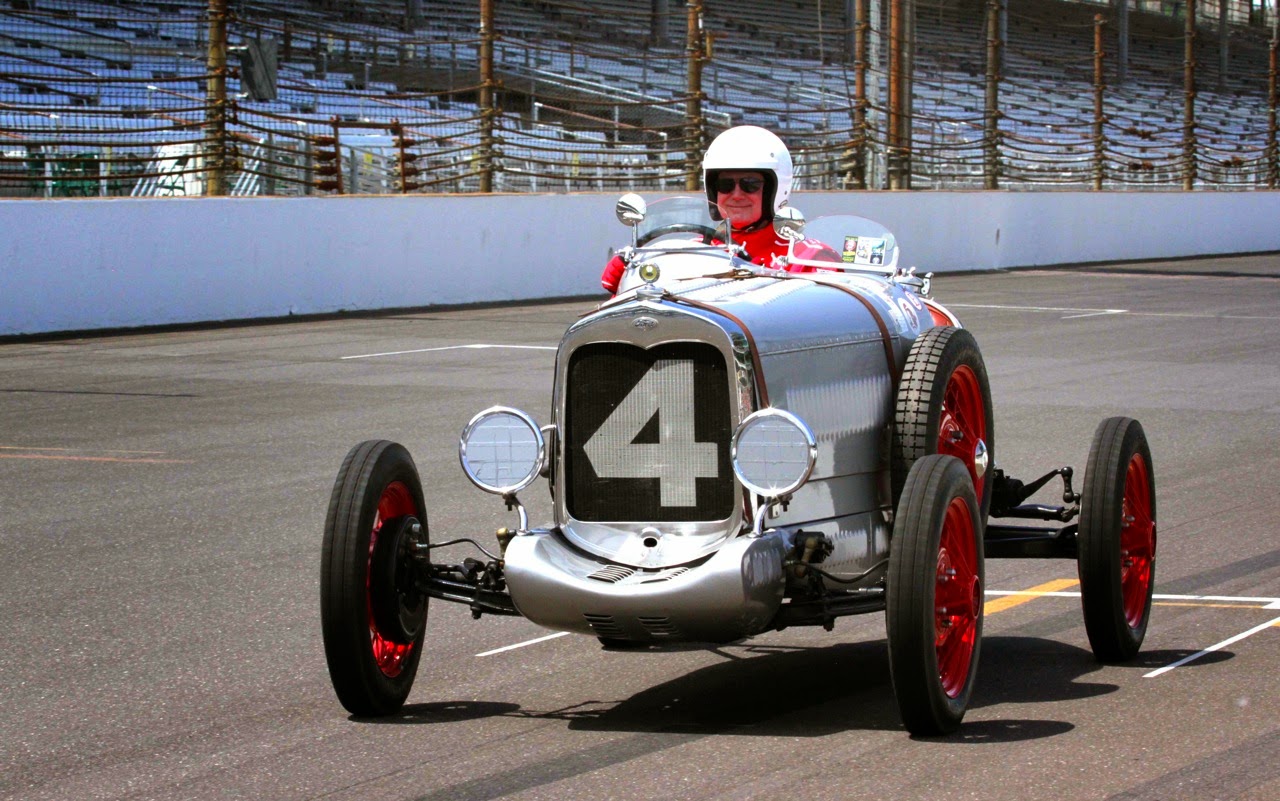 Check out the smile on collector-racer Ford Heacock’s face. It was that kind of experience as racers realized a dream to actually run at the Speedway. Heacock’s ‘29 Ford Roadster was originally raced in Europe later returned stateside to compete in vintage events. 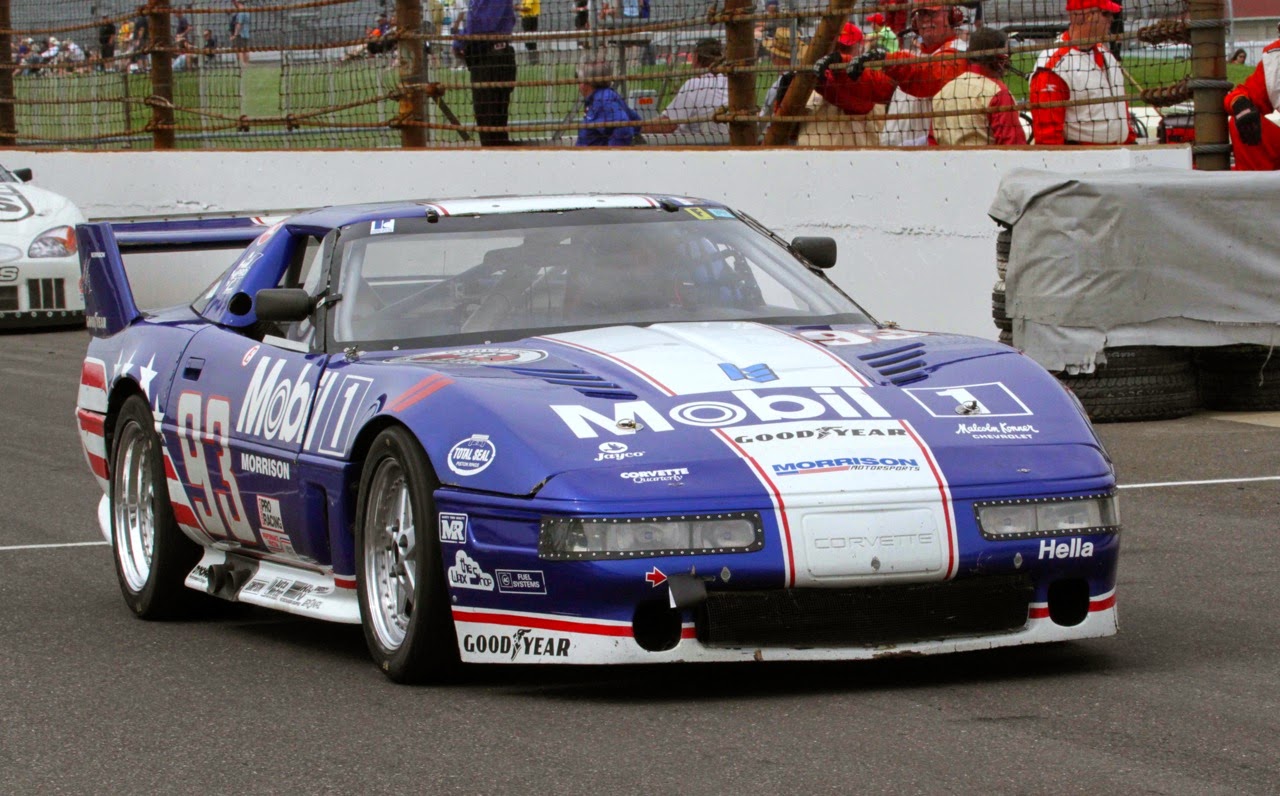 In the early 1990’s, GM decided to kick the C4’s performance up a notch and spawned the ZR1. Equipped with a Lotus designed quad-cam, four-valve aluminum V8, wider wheels and bodywork and upgraded suspension, the car represented a pinnacle in Corvette development at the time. Corvette racer Tommy Morrison, took a few racing and created this car, now driven by Jon Pfeffer. Called the Snake Skinner, the cars featured aero-tweaked styling. 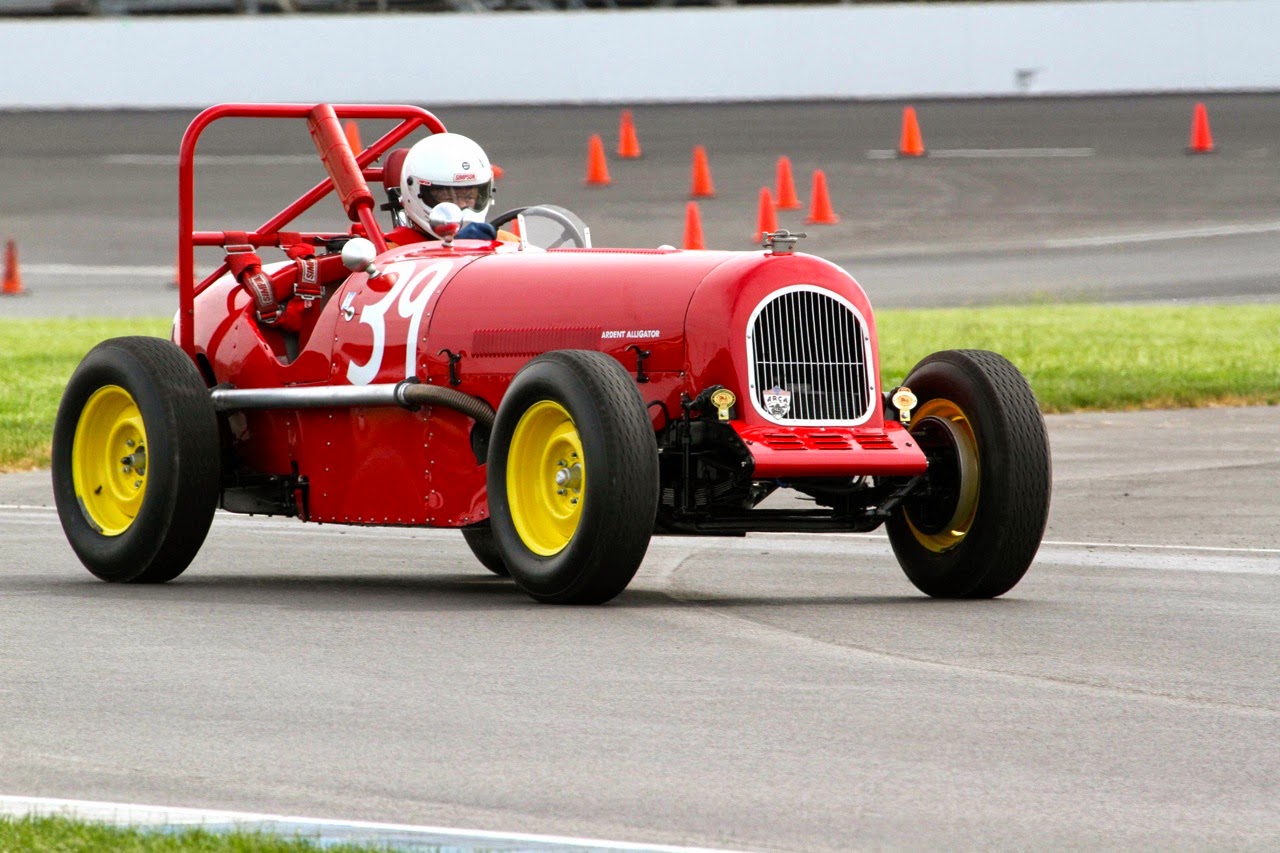 You would think that after a lifetime of racing and winning, the Ford Flathead-powered Ardent Alligator would be retired to a pampered life of climate-controlled trailers and carefully manicured show fields. But that is not how Joanne & Pete McManus see it. They regularly ring
it out in vintage races throughout the country.