Skip to content
Mike Matune showcases some of the finest vintage racing Corvettes, off track
at Corvettes At Carlisle. 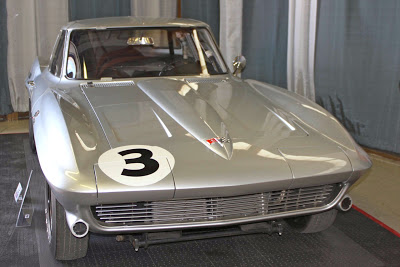 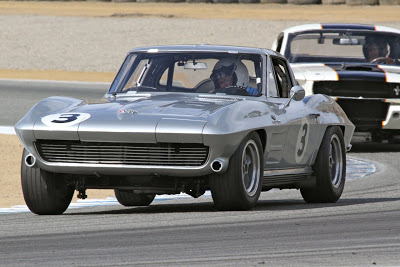 It was like I couldn’t get enough of Corvettes. Scarcely a week after attending the Monterey Reunion where Corvette was the featured marque, I found myself in Carlisle, PA attending Corvettes at Carlisle. With dust from Laguna Seca literally still on my shoes, I wandered the grounds among the Corvette faithful, as fervent a crowd as you would ever hope to see. There’s little doubt based that Corvette is indeed America’s sports car. From its very inception as a six-cylinder automatic boulevard cruiser, it has suffered from corporate neglect and misdirection, as well as the slings and arrows of pundits and naysayers. It has been strangled and crippled by regulators and suffered any number of indignities. But through it all it has persevered. Today the Corvette enters its seventh iteration and “World Class” is being bandied about and not so lightly. The faith of the faithful may be about to be realized.
But before we go there, let’s look back.

In case you thought I was joking, here are two pictures of Tom McIntyre’s ‘63 Mickey Thompson Corvette racecar, above, taken one week and, according to Google Maps, 2,858 miles apart. In early 1963, Mickey Thompson took four of Chevrolet’s new Sting Rays to Daytona for Speed Week. Two were small-block cars intended to compete in that year’s Continental. The other two, including this one, were powered by Chevrolet’s 427-inch “Mystery Motors” and slated for the American Challenge Cup. Junior Johnson would qualify Tom’s car, but as race day dawned cold, dark and rainy, he would hand the driving duties over to Billy Krause. Krause compared the car to driving a sauna as the rain flashed to steam when it contacted the exhaust system. He would finish Third behind Paul Goldsmith’s Pontiac Tempest and A. J. Foyt in another Corvette. That same week, GM Chairman, Frederic Donner would reiterate GM’s participation in the AMA racing ban and it all became a game of “what might have been.” 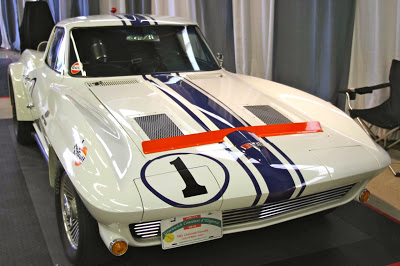 To understand the significance of John Justo’s car you only have to review the names associated with it: Dr. Dick Thompson, Grady Davis (Gulf Oil) and Don Yenko (Yenko Chevrolet). This too was a very early Sting Ray delivered in October and competing in the Grand Prix of Puerto Rico, November 1963. The car would compete in both the SCCA A/P ranks and as an FIA car at Daytona and Sebring. In this shot you get an idea of the modifications made to accommodate wider tires on knock-off wheels as well as to add side and top marker lights. Up front the headlight door motors were removed. The hood features metal grates and an orange spoiler reportedly designed in GM’s wind tunnel. 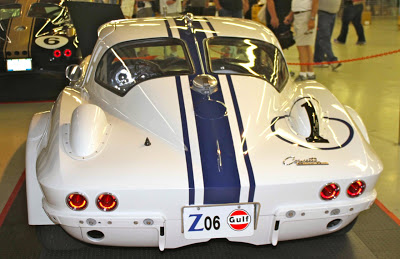 When you move around back, you see the special Plexiglas windows along with the rear brake scoops. The fuel filler is moved forward from its stock Z06 location to aid fueling. On the driver’s side, the small black object is an antenna for the two-way radio, now commonplace, but cutting edge technology then. And these are just the modifications discernible by eye. Underneath the car featured changes to its engine, brakes and suspension, all designed to take it round a track just that much quicker. This car was likely slated to have competed at Le Mans that year along with entries from Mickey Thompson and Alan Green. 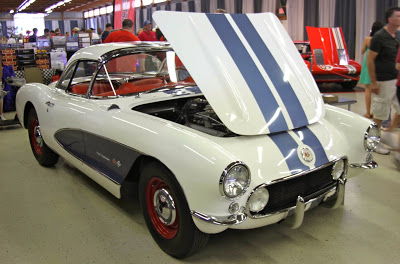 This is a car you would walk right by thinking it was just another well-restored straight-axle Corvette. But this car has the unusual RPO 684 “Air Box” option. Air was inducted from behind the headlights, routed through ducts along the rocker panels and delivered to scoops on the rear brake backing plates. Marchal driving lights add a unique touch. 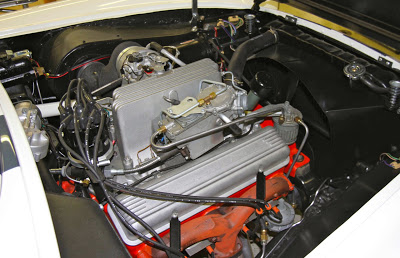 Under hood, you can see another feature of the RPO 684 package: Rochester fuel injection engine. Underneath, RPO cars featured special frame “X” members to accommodate a
larger diameter exhaust system. 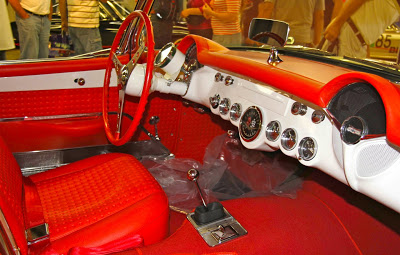 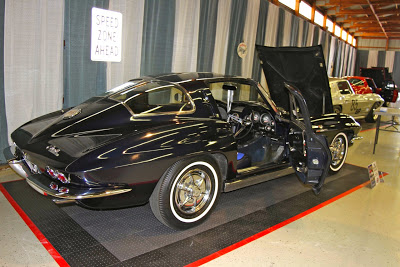 No the negative on this one hasn’t been flipped; Terry Michaellis’ ‘63 Corvette is right-hand-drive. Originally exported to the GM Holden in Australia, the car features the Z06 option and radio-delete. Beyond its Z06 value, the car is a true low-mileage survivor having not been subjected to the usual abuse at the hands of countless owners. Michaellis continues to sort out the car’s history and documentation hoping to someday be better able to explain its lineage. 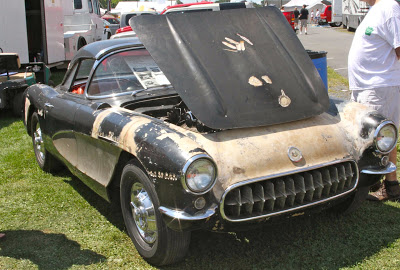 Bear with me on this one. Unlike all of the beautifully restored Corvettes featured here, this one remains in “Barn Find” condition. Looking more than a little worse for wear, it caught my attention based on the very subtle, domed hood. 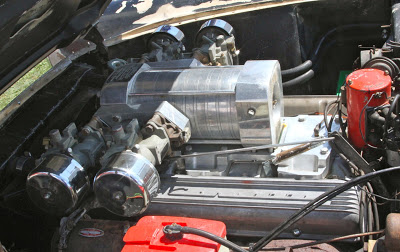 When I took a look under the hood, I was pleasantly surprised to find some great vintage speed equipment. This car was quite the hot rod in its day. It features four side-draft single barrel Carter carburetors feeding a Latham axial supercharger. A Spalding “Flamethrower” ignition supplies the spark. Latham superchargers date back to the 1950s and were similar to a turbine engine design. They took fuel from the carburetors at the front and used a series of blades to compress it and then force it down into the manifold at the back of the supercharger.
In its day, this was state of the art. 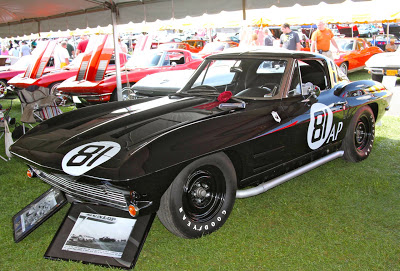 The Z06 option on the ‘63 Sting Ray packaged together all of the high-performance pieces to make the Corvette a competitive SCCA production racer. The rare Z06 delivered better brakes and suspension with an oversized fuel tank and a “breathed on” Rochester fuel injected engine. Despite low, low production, Corvettes At Carlisle was crawling with them!

Among them was C.J. Titterington‘s car. Immaculately presented, this car is the result of a long restoration and painstaking documentation process carried out by C.J. and his sons and friends. It was originally campaigned by Alvin Forsyth, a Chevrolet dealer from the Pittsburgh area. 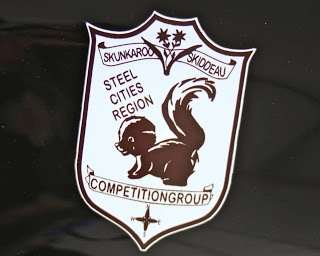 Forsyth was associated with the Steel Cities region of the SCCA along with Gulf Oil’s Grady Davis and benefitted from that association, as Davis was able to gain Forsyth access to GM’s “back door.” C.J. is justifiably proud of the car and invited close inspection over, under and through it. Nothing, and I mean nothing, was out of place. This period sticker, right, is but one example of the depth of the detail on this restoration.

Check out Corvettes At Carlisle, http://www.carsatcarlisle.com/events/corvettes/