While he wasn’t ready to spike-up his hair and tattoo a car club logo on his chest, Car Guy Chronicle‘s contributor, Jim Palam, was more than willing to motor South on Highway 101 and immerse himself in the cuffed-denim and octane-fueled culture of the 18th annual VENTURA NATIONALS: RODS, CUSTOMS, BIKES & GUITARS! 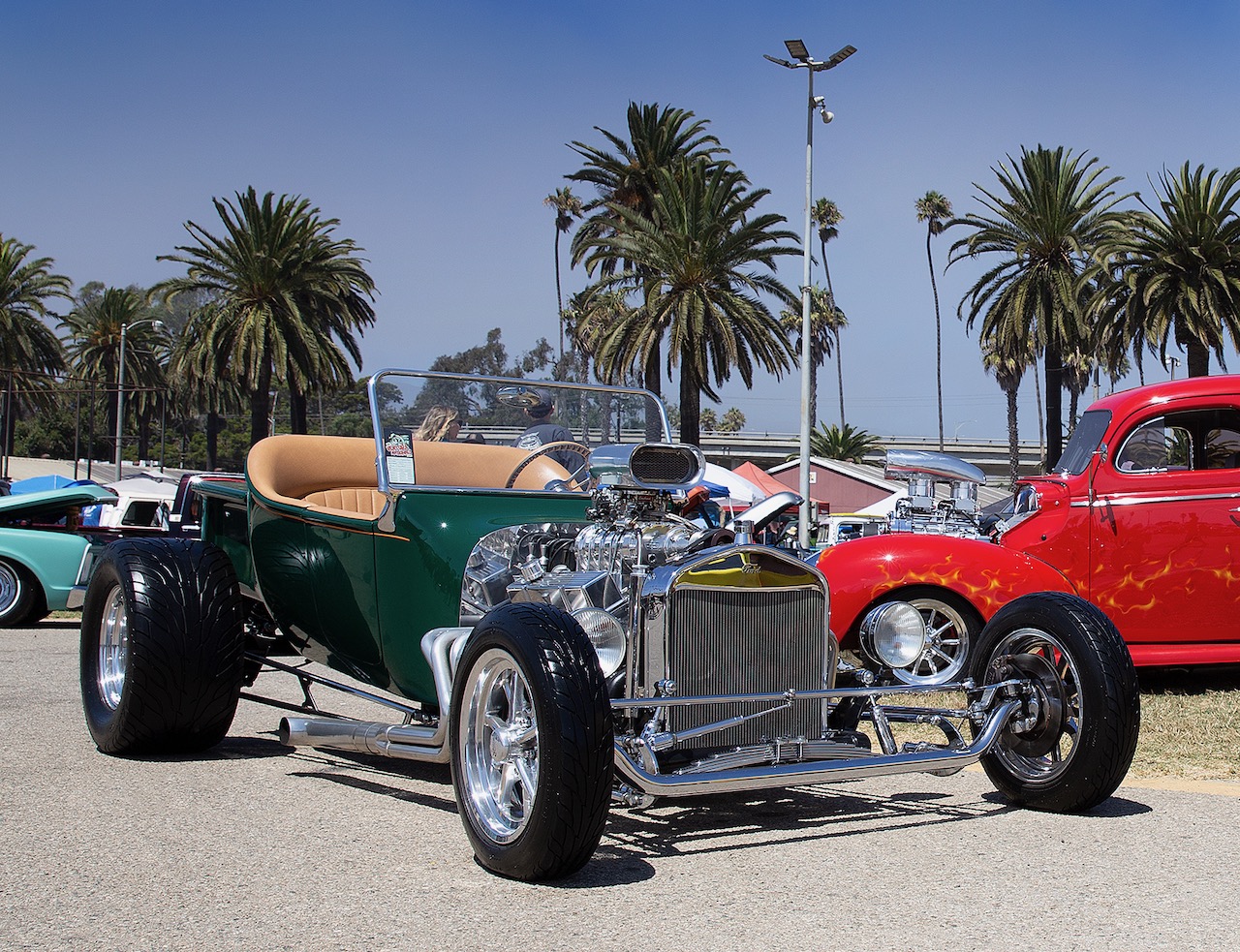 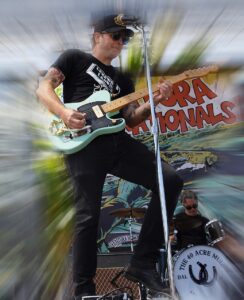 There are lots of things that go together well – like bows & arrows, macaroni & cheese, Batman & Robin. But for those of us with octane in our veins, the rhythm of our lives purrs along best when there’s a stick shift in our hand and a wailing car song in our ears. From Jackie Brenston’s Rocket 88 and Chuck Berry’s Maybelline, to Golden Earring’s Radar Love and Deep Purple’s Highway Star, thumpin’ music and high octane has long been a potent elixir helping to fuel the fun and adventure factors in our Car Guys’ lives. So, it was with a tingling in my spine and Ramblin’ Man on my radio that I headed to the Ventura Fairgrounds for the VENTURA NATIONALS: RODS, CUSTOMS, BIKES & GUITARS!

This was the 18th annual gathering for this popular Central Coast car event at the spacious Ventura Fairgrounds. Acres of oceanside parkland and thousands of square feet of indoor meeting space got covered and filled with almost 1,000 hot rods, customs and vintage motorcycles. There were also pedal cars, vendor booths and an outdoor stage for high-energy music acts that fired up the fairgrounds, including the Delta Bombers, The 40 Acre Mule and Jackie Mendez. If the music wasn’t blasting from the live stage, it was booming from premium car audio systems that seemed to be a requisite component of the flaked and slammed Lowriders and Customs on display.

As I worked my way around the Fairgrounds I was struck by the dichotomy between the perception and reality of this denim-clad, Mid-Century influenced car culture. Tough LA street guys talked to me about their mission to pull kids out of gangs by providing projects for them in fabrication and speed shops. A heavily tattooed member of Satan’s Escorts dug into his cooler to give me a free bottle of designer water. Ruby-lipped moms and bandana-wrapped dads pushed their happy toddlers around the Fairgrounds in custom pedal cars. While there was rockin’ music and high-octane in the air there was something else, something special, much more present: there was lots of love – for the custom machines, the exciting music and of course for family and friends. Kudos go out to the hard-working staff of this event, especially to show producers, Aaron & Holly Stein

Henry Ford introduced the Model T in 1908. With its simple design, interchangeable parts and affordability it not only became the best-selling car in the world, it became the choice for many hot-rodding transformations in the 1940s and 1950s. With the prosperity and Jet Age stylings of the 1950s and 1960s the “T” lost some of its allure, but you’ll still find excellent examples like this supercharged T-Bucket, top photo, at car shows and rod runs around the world. 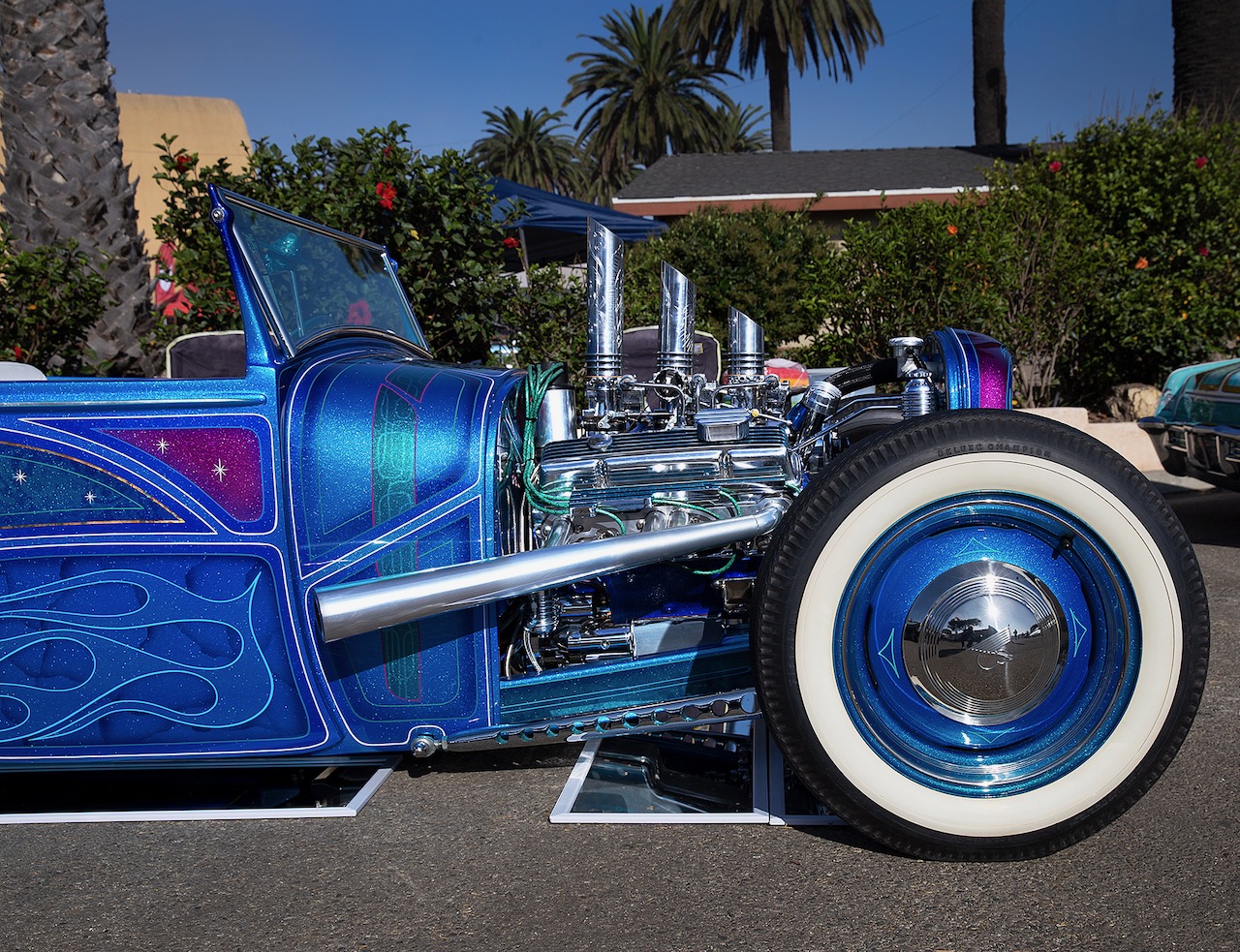 Stacey Gann has a precious heart. Her full-custom ‘29 Model A Preciosa Corazon is another fabulous Kreation from K-Daddyz Kustomz of Bakersfield. Triple ascending and truncated velocity stacks give the motor from Mark’s Automotive a pipe organ profile. The club’s name, Loco Banditos, is scripted below an array of floating chrome buttons on the rod’s grille. 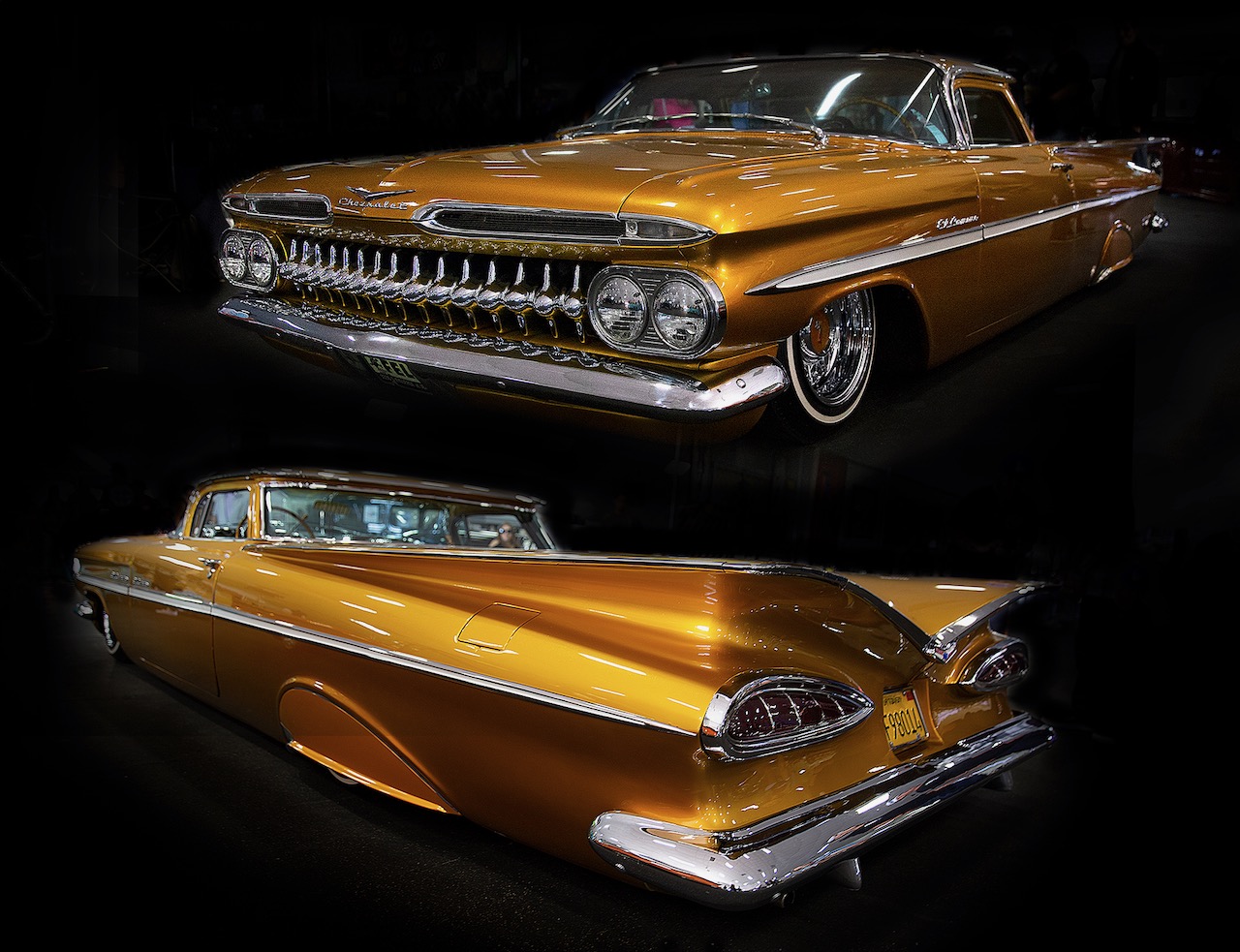 While there were over 22,000 El Caminos produced in 1959, it’s still pretty rare to spot one these days. It wasn’t the shimmering chrome or drool-inducing Candy Gold paint that alerted me to Gustavo Palacios’ long and low ’59 Chevrolet El Camino – it was the ear-drum-cracking, sonic thumping from its explosive audio system that stunned me and many of the other 7,000 attendees at the show. (Note to self: Add ear plugs to gear bag for next show). 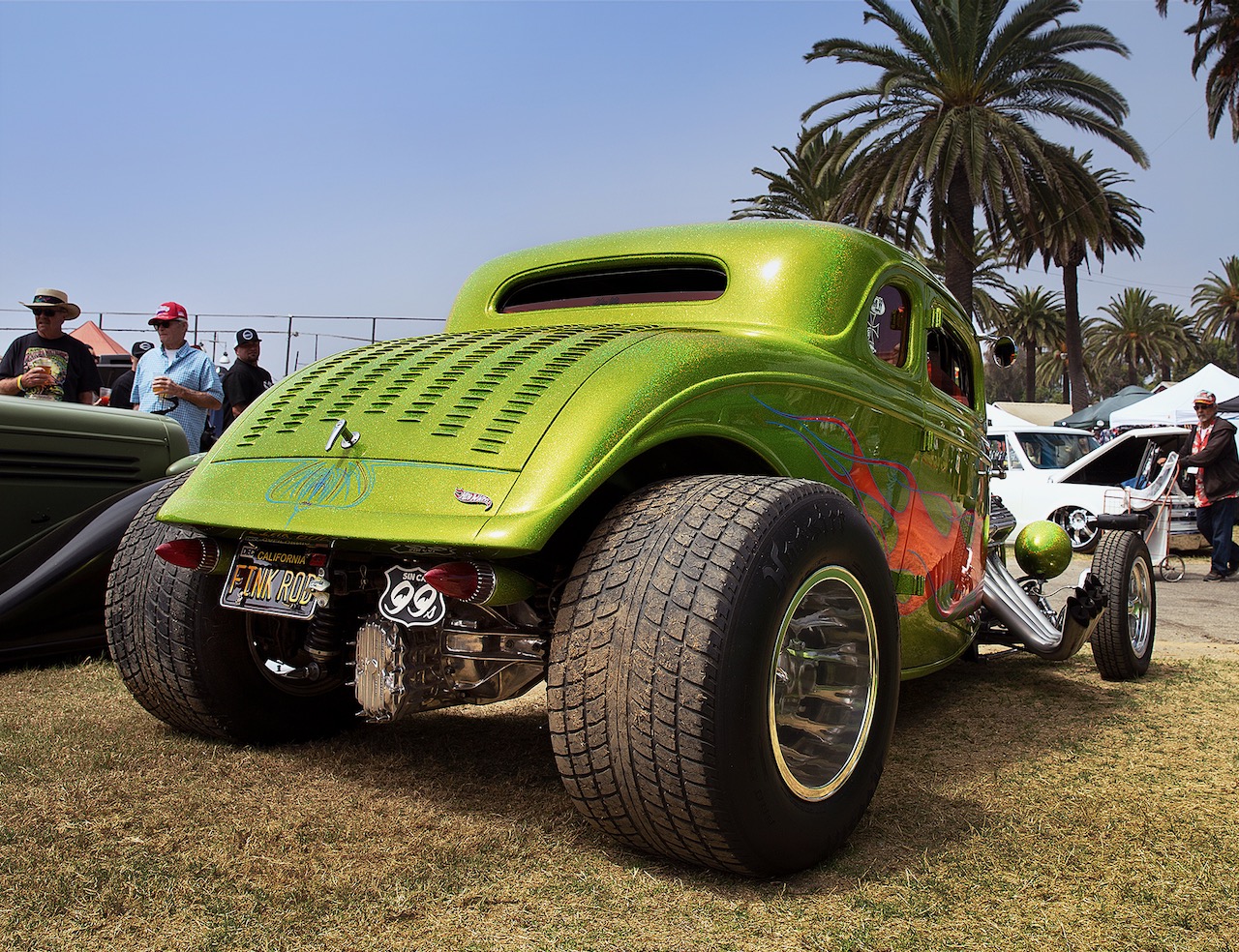 FINK: An unpleasant or contemptible person; avoid at all costs. FINK ROD: A bad-ass bright metalflake green, supercharged ’34 Ford 5-Window Coupe; get behind the wheel if it’s the last thing you do. This Kustom Kulture Advisory brought to you by Fink Rod owner, Lillard Hill of Bakersfield. 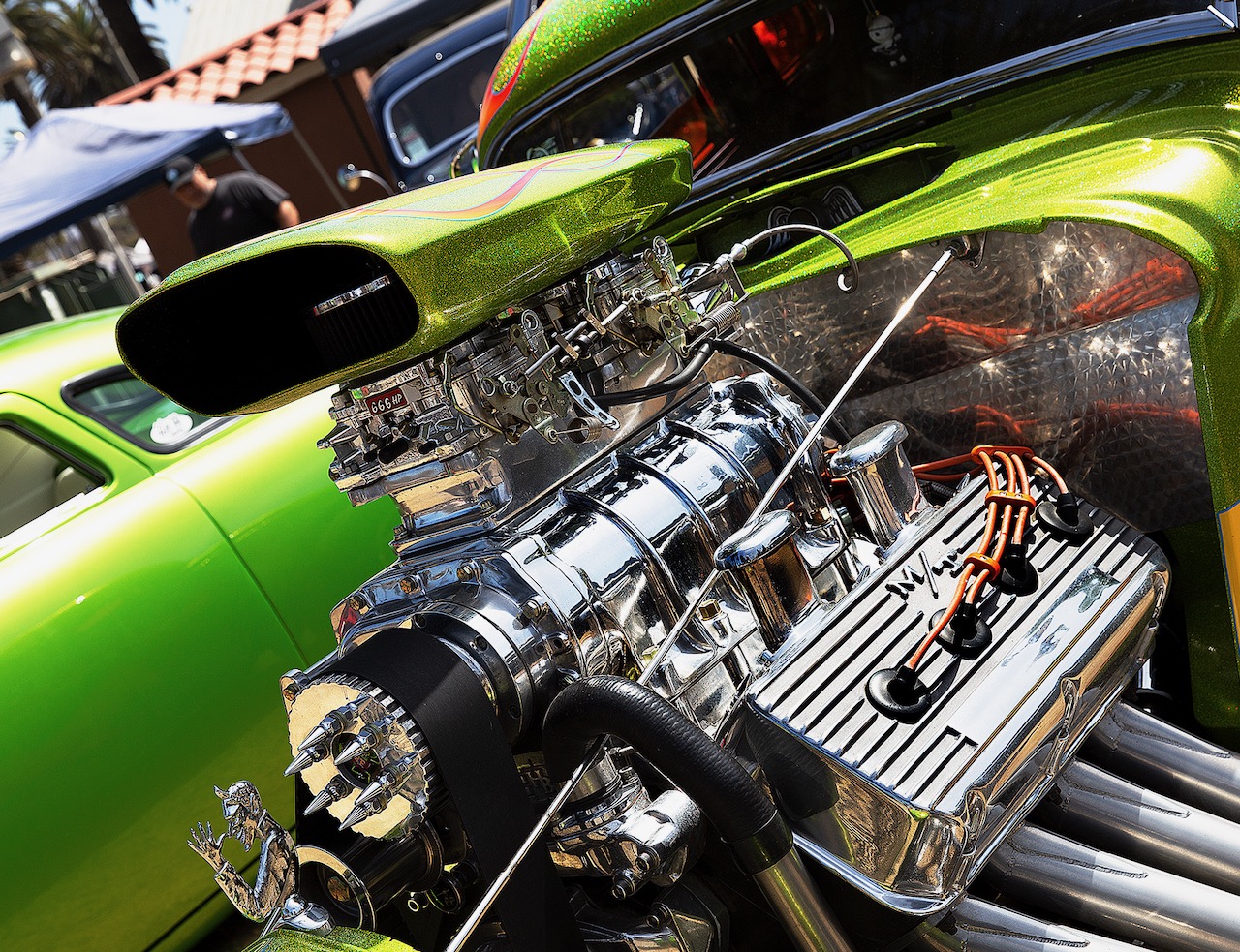 FINK ROD Specs: Wicked from every angle, this homage to Hot Wheels and Ed “Big Daddy” Roth gets its bang from a supercharged Chrysler 392 Hemi. Power is delivered to a 4.56:1 Halibrand quick-change rear end via a Turbo Hydramatic 400 trans with a Gear Vendors overdrive. Fink Rod bites at defenseless roads with its massive 31×16.5 Hoosier tires! 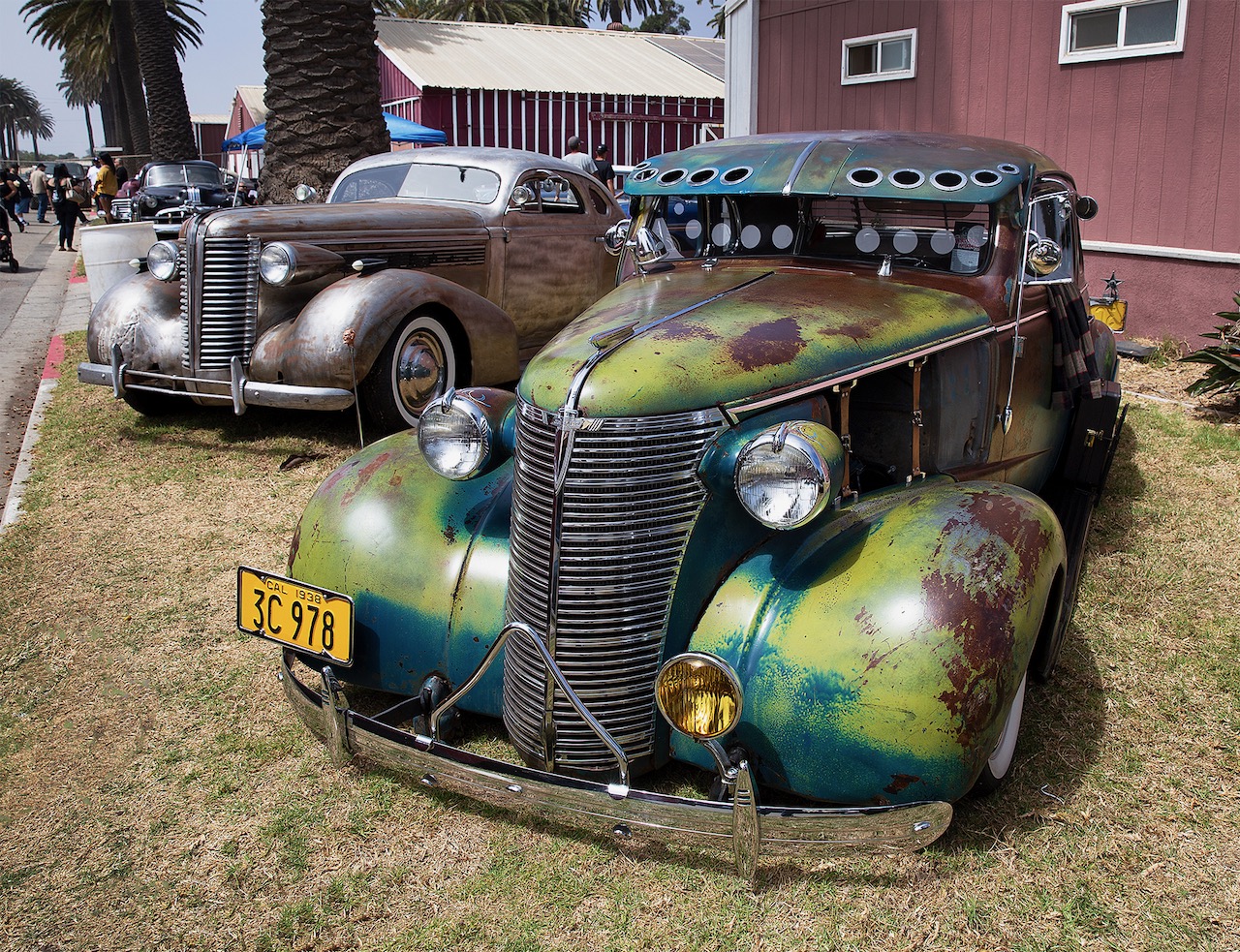 Welcome to the Unfinished Line. Back in the day you rumbled through town in your primered hot rod not so much because you were going for a look, but rather that you spent your entire budget getting it running. These days, a primered, traditional or “patina” look is often the end goal – albeit most primers are now clear coated to seal and protect the finish. Edwin Hernandez’s ’38 Master Deluxe Business Coupe is a good example of one of the endless possibilities that can be achieved when going for a weathered, patina look. 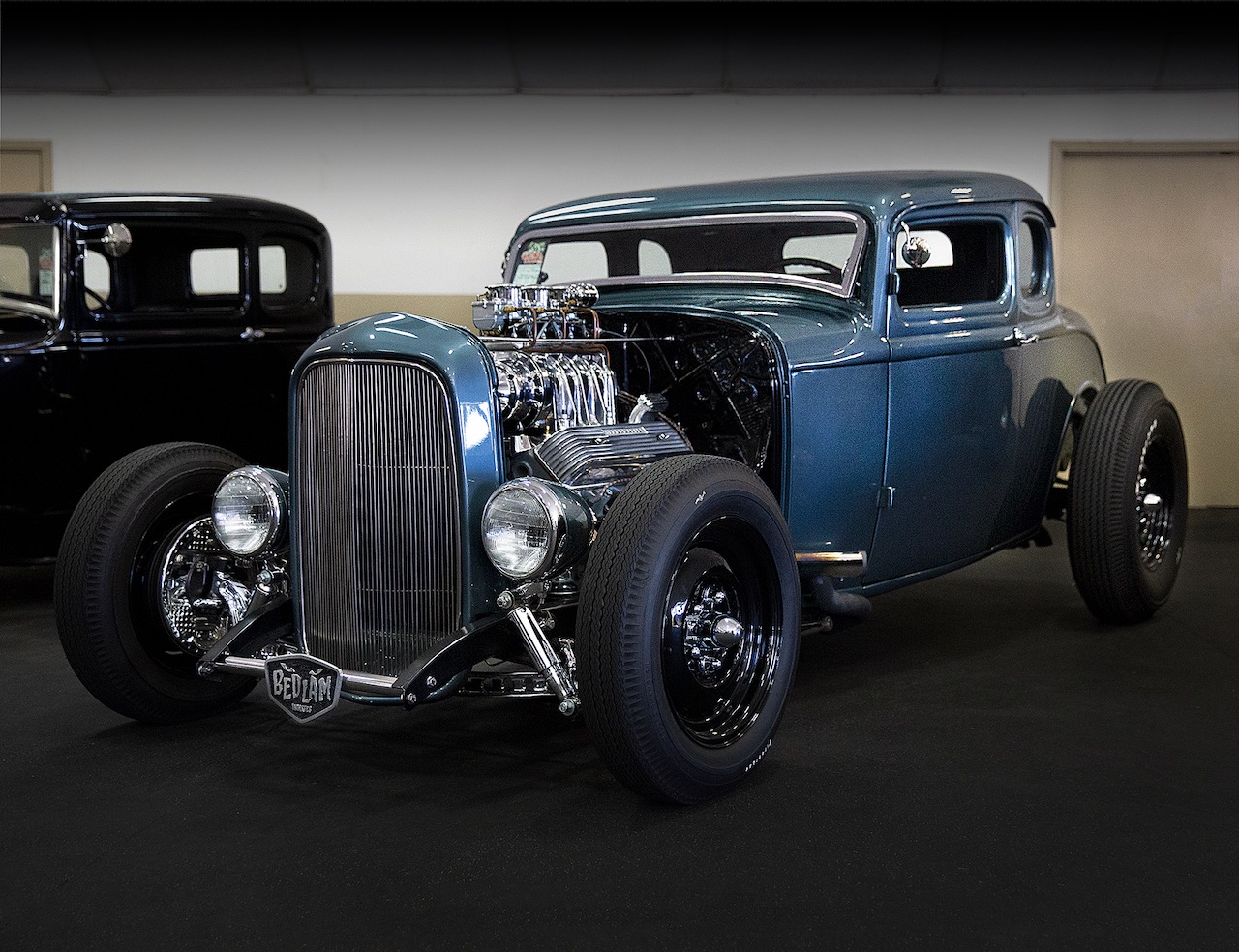 Simon Gluckman’s Best of Show Hot Rod ’32 Ford 5-Window Coupe gets the “Hot” part from a blown ’56 Olds motor. This London-to-LA transplant’s Bedlam Car Club is home to some of the purest looking and sweetest running 1940s and 1950s traditional hot rods in Southern California. Bedlam, which took its club name from an infamous psychiatric hospital near London, is a relatively new and small club. If you hear that Bedlam is coming soon to a show or event in your town relax, it’s a good thing! 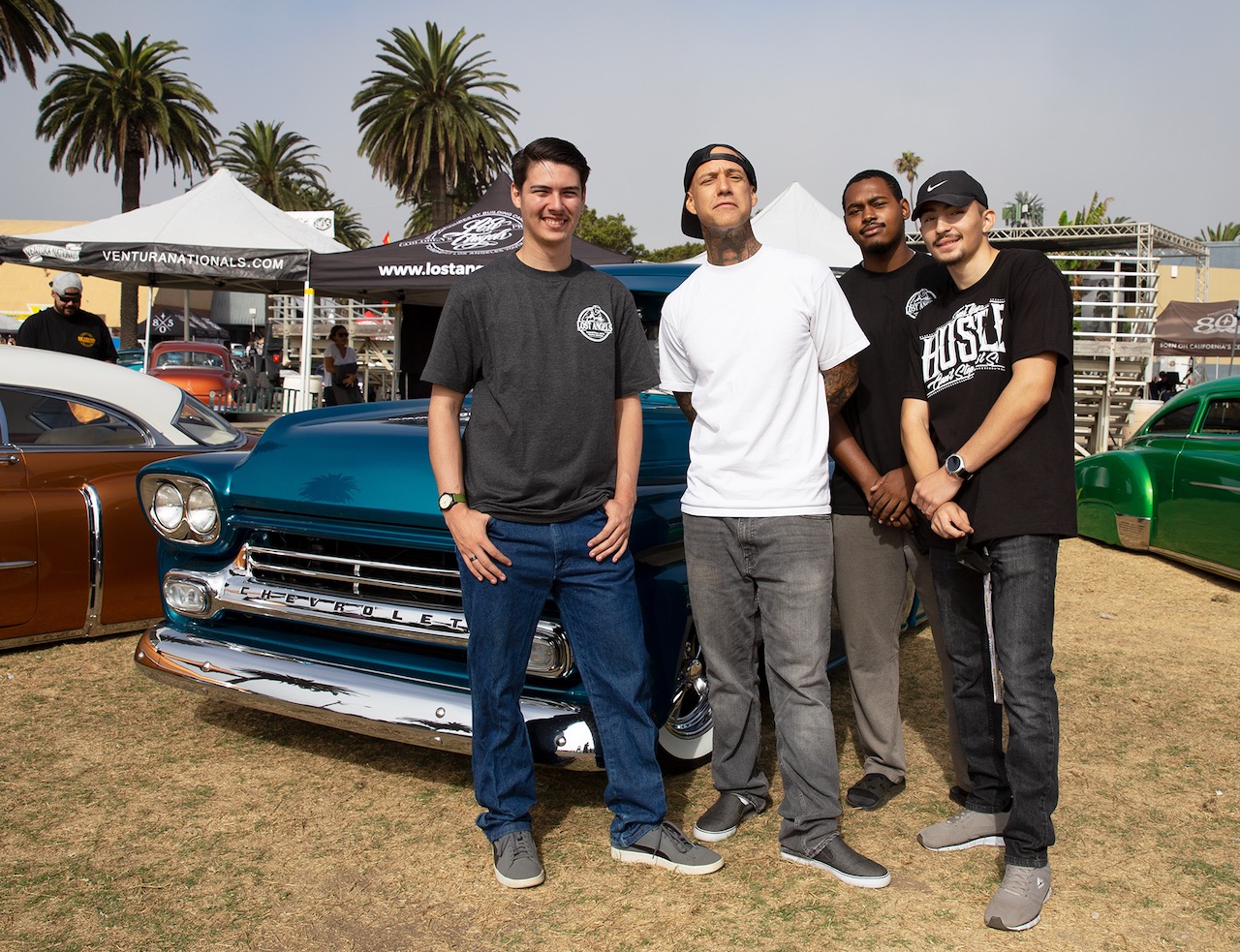 Aaron Valencia made the right decision when he arrived at a fork in the road of his troubled life. He went into rehab, took guidance and support from people who cared, and when he got a modicum of success with his automotive repair and fabrication business, he quickly focused his time and energy on helping disadvantaged and at-risk kids. In 2014 he helped found the Lost Angels Children’s Project. He’s pictured here in a white tee with three young men – and a custom pickup – whose lives have been redirected to a positive future thanks to the Program and this dedicated Car Guy. 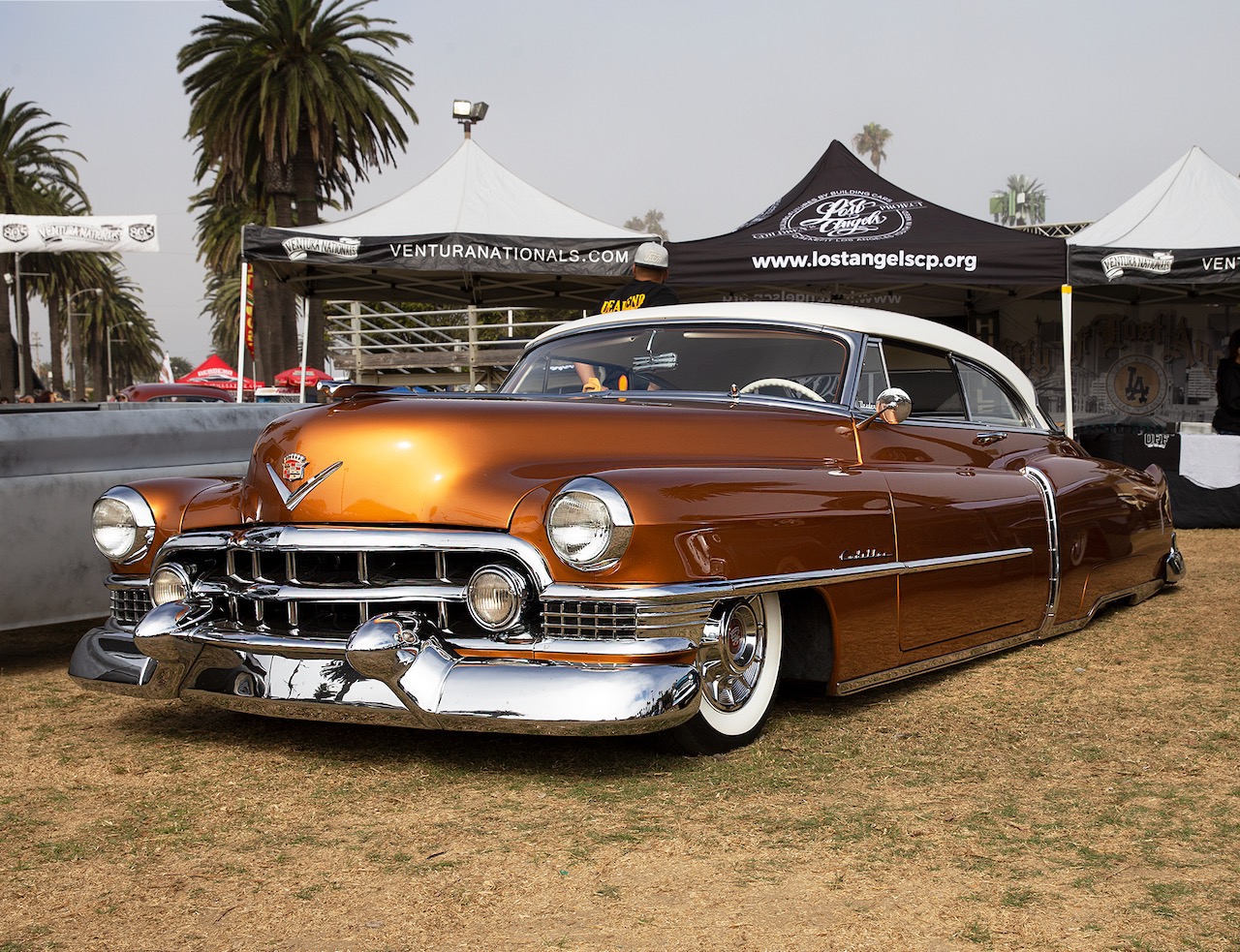 One of the ways the Lost Angels Children’s Project raises money is by restoring a classic car and raffling it at shows like the Ventura Nationals. When I asked Mike from Salinas who was polishing his gleaming ’51 Cadillac Coupe how a young guy like himself managed to afford such an outstanding custom he joyfully responded, “I won it!” It was from there that I was introduced to Aaron Valencia and learned about all the good things the Lost Angels Children Project does. Check it out @ https://www.lostangelscp.org/ 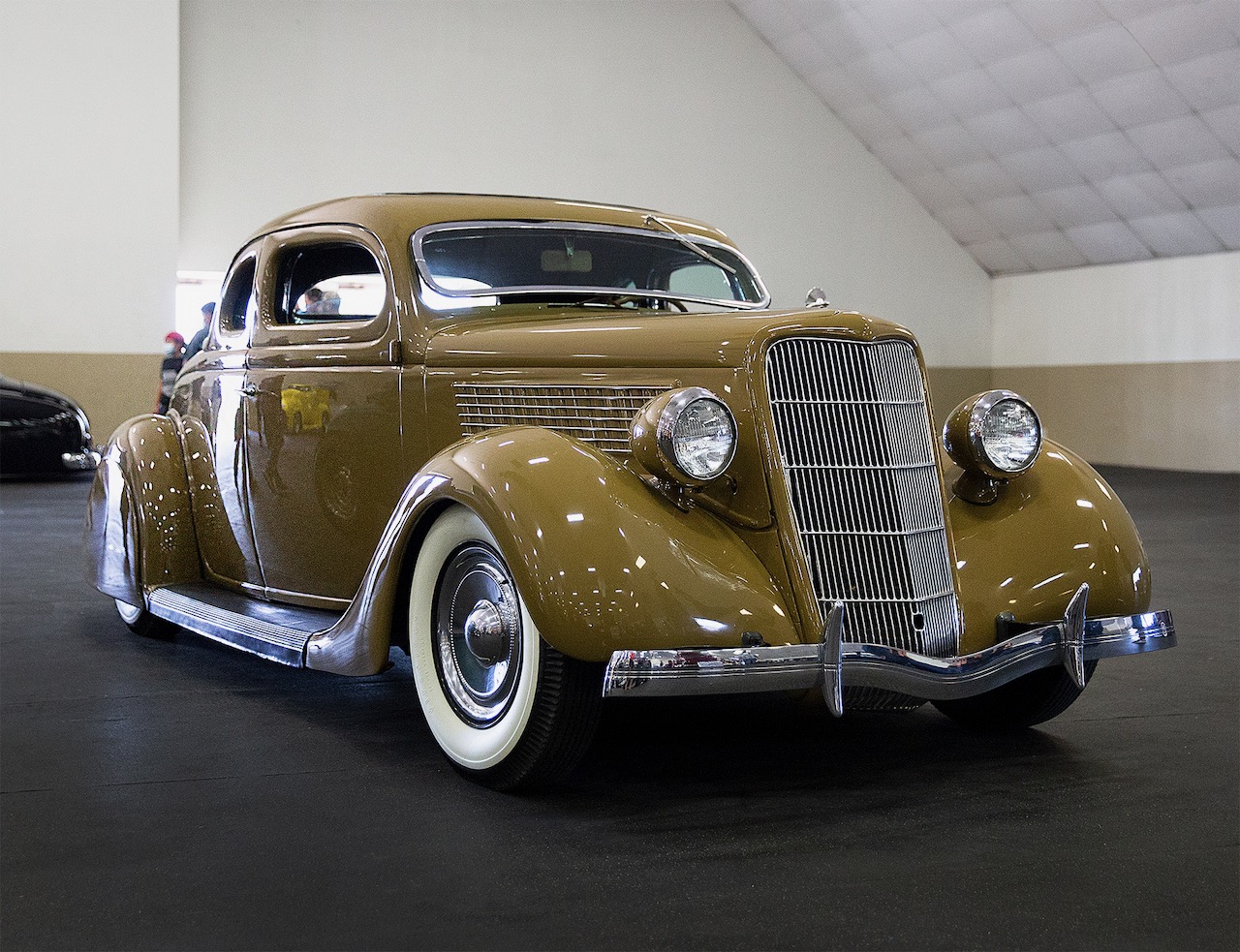 The ‘35 Ford 5-window Coupe, with its sleek lines and rum-runner stance, has long been a favorite of customizers. Joe from JV Garage in San Diego brought his dropped, chopped and skirted ’35 to the Ventura Nationals and it’s a real beauty. Fat Firestone whitewalls make a snappy style statement against the custom-mix Buckskin Tan paint. 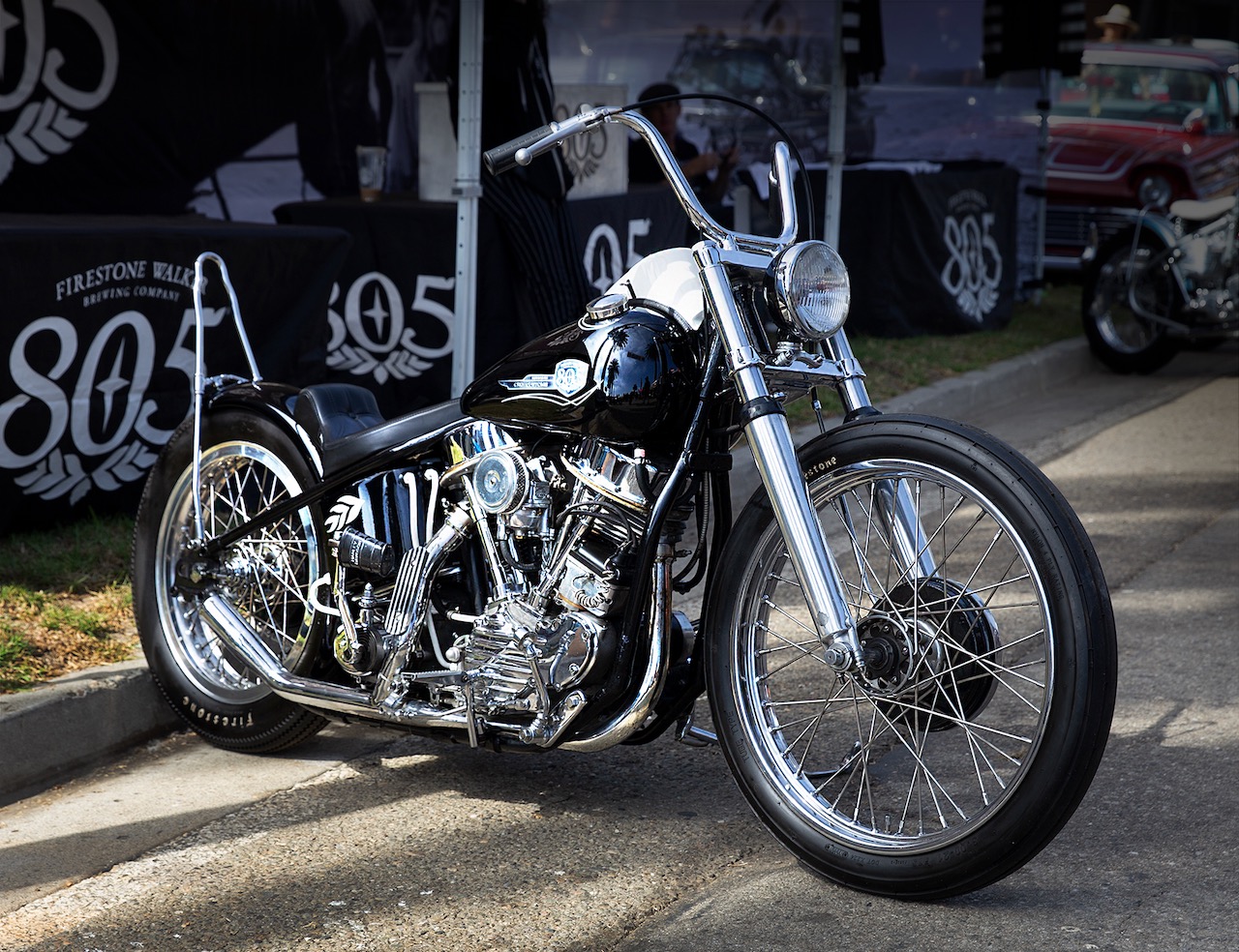 805. It’s an iconic California number. You can be from the 805 if you live in Santa Barbara, San Luis Obispo or Ventura Counties. You can drink an 805, which is the immensely popular blonde ale from Firestone Walker Brewing Company. And if you’re motorcycle builder Caleb Owens, an 805 is perhaps the highest profile build to come out of your shop, Cro Customs. Built for the brewing company, the 805-badged chopper is an understated and tastefully transformed ’51 Panhead FL. And yes, it’s wheels are wrapped with Firestone tires. 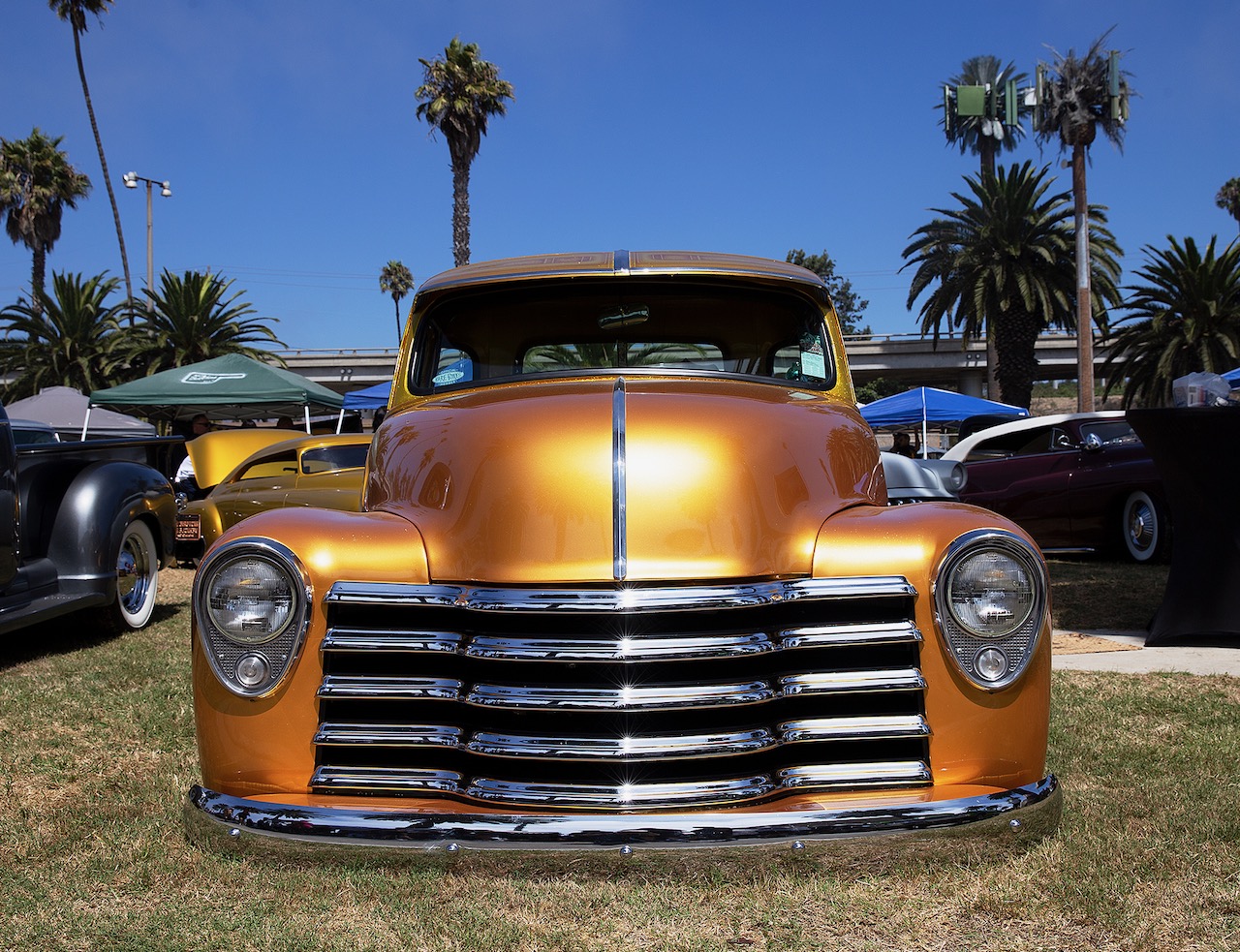 A low center of gravity has distinct benefits – if you’re racing an F1 car, but if you’re Adam Hartley rolling your custom ’52 Chevy Pickup from Vegas to Ventura for the Nationals, a slammed to the ground stance at the show has nothing to do with racing geometry. It’s an attitude bred from anti-Anglo Lowrider culture that grew over the decades into a worldwide automotive aesthetic – as popular in Japan today as it is in Southern California. And you don’t need an X-framed Impala to go low. Today’s hydraulics technologies and suspension kits can slam or stance your pickup, your Prius or your Peterbilt. Just watch out for those speed bumps! 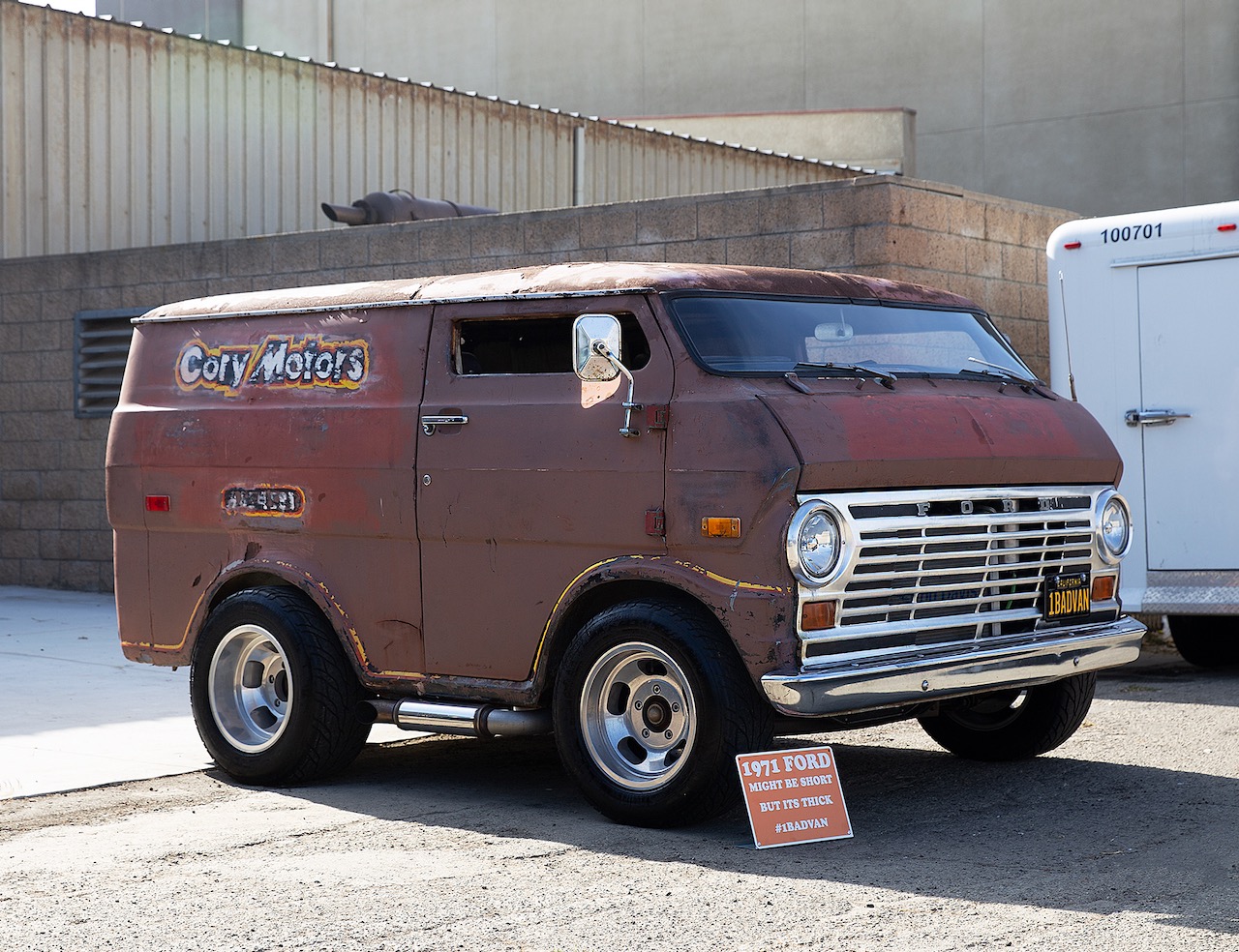 VANdalism? Here’s one for the It’s a Small World files. One of the first Customs I encountered when first entering the Ventura Fairgrounds early Saturday morning was this radically chopped and shortened ’71 Ford Econoline Van. My current mechanic who has helped me dial-in my 914 Porsche worked at Cory Motors in Santa Barbara for years and yes, this is a 40+ year-old project by the original owner of the shop. The resurrected van is currently owned by Travis Walker. 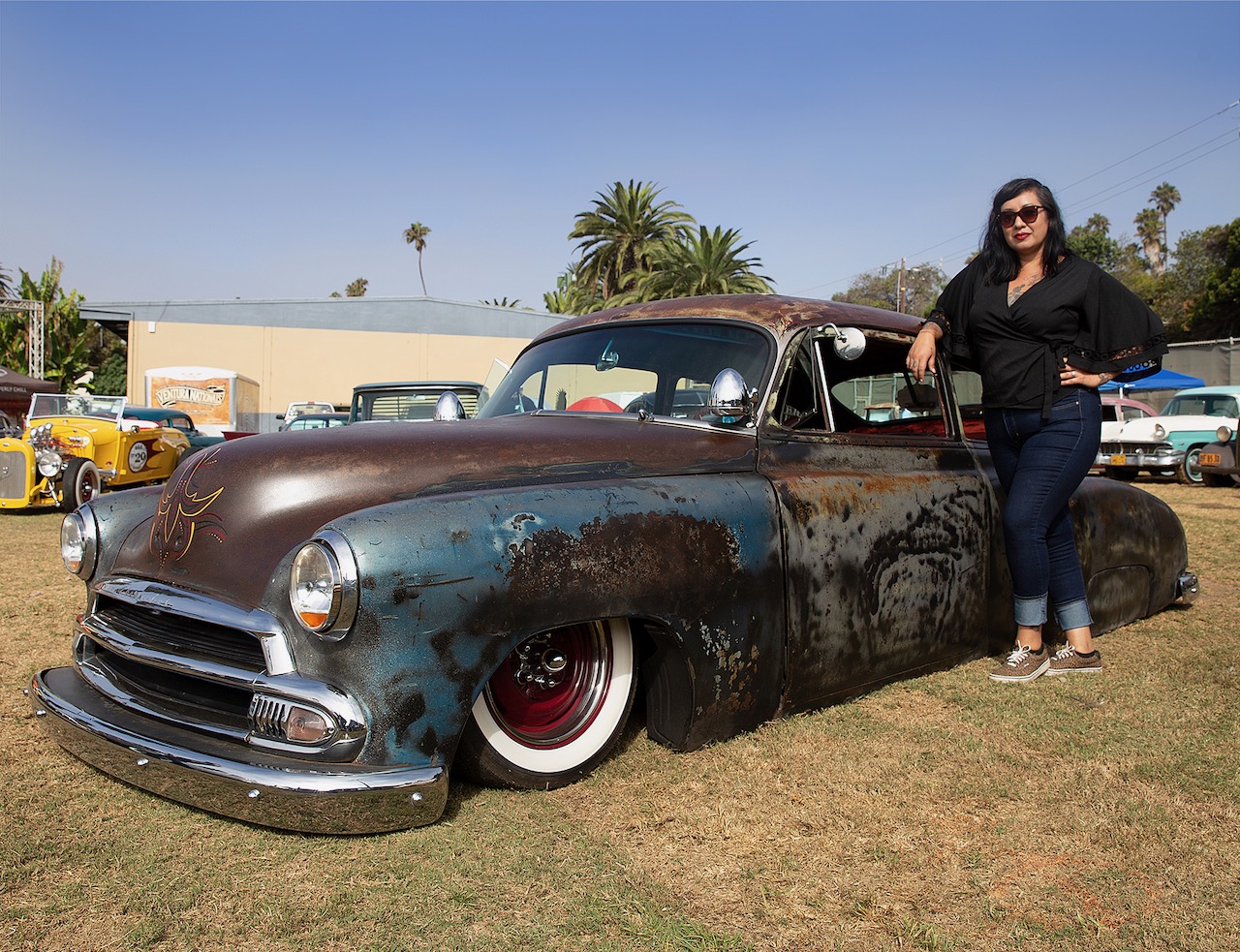 Meet Maria – and her ’51 Chevy Deluxe Coupe. She and her husband have been transforming their Chevy slowly but surely, from a survivor to a showstopper. It’s perfectly fine that it’s in something of a Rat Rod stage right now because that’s a “look” too that fits Maria’s style. “I’m not worried about the details now. We got her driving well and we’re always cruising.” 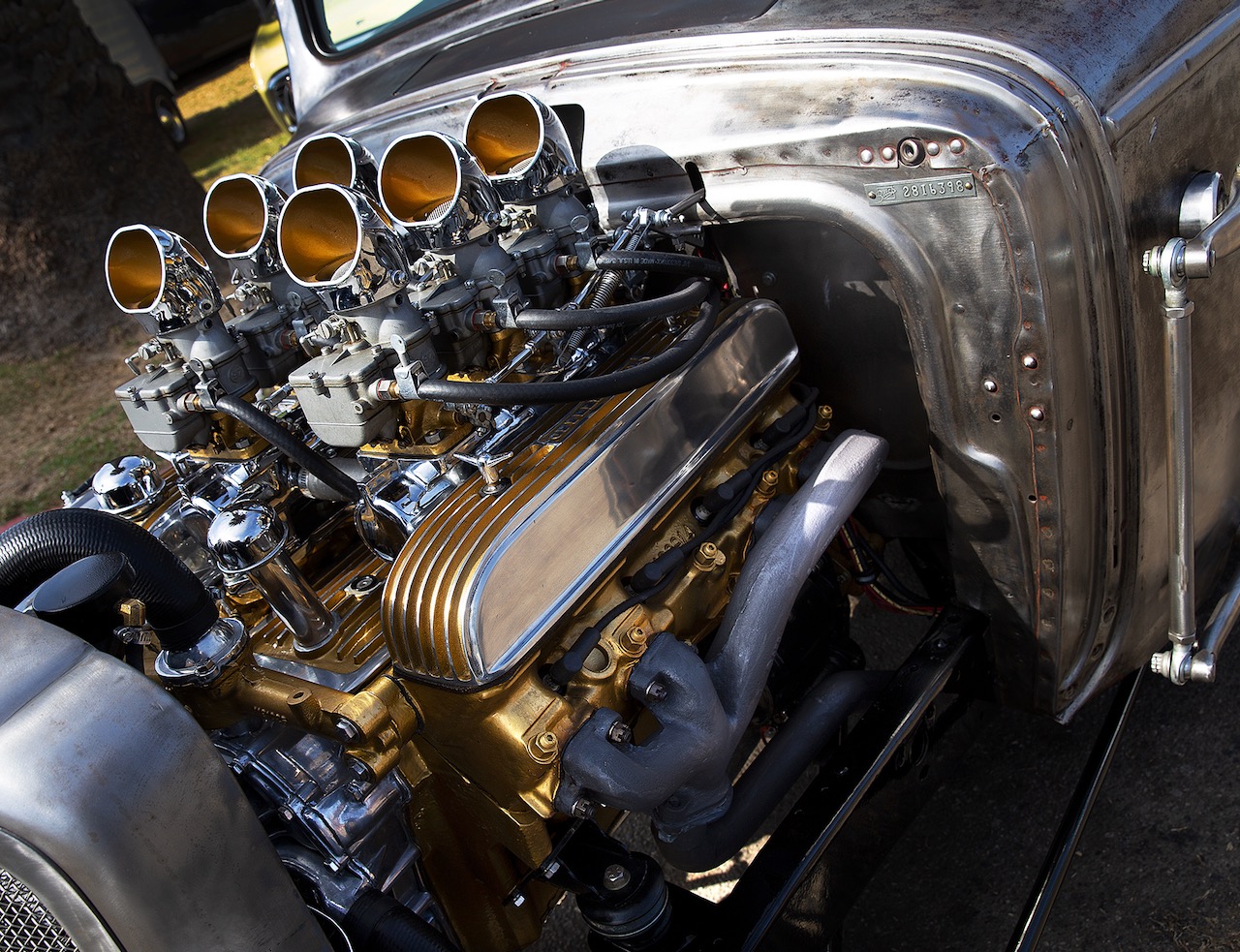 Jim Ramierez from the Throttle Kings Car Club landed a main thoroughfare parking position for his wicked ’34 Buick hot rod. While the heavily-modified, unpainted body is a hammered-metal piece of art – thanks in part to the gang at (Jimmy) Shine Speedshop – I just couldn’t take my eyes off its high-rev Nailhead Buick engine. Introduced in 1953, it was Buick’s first V-8. 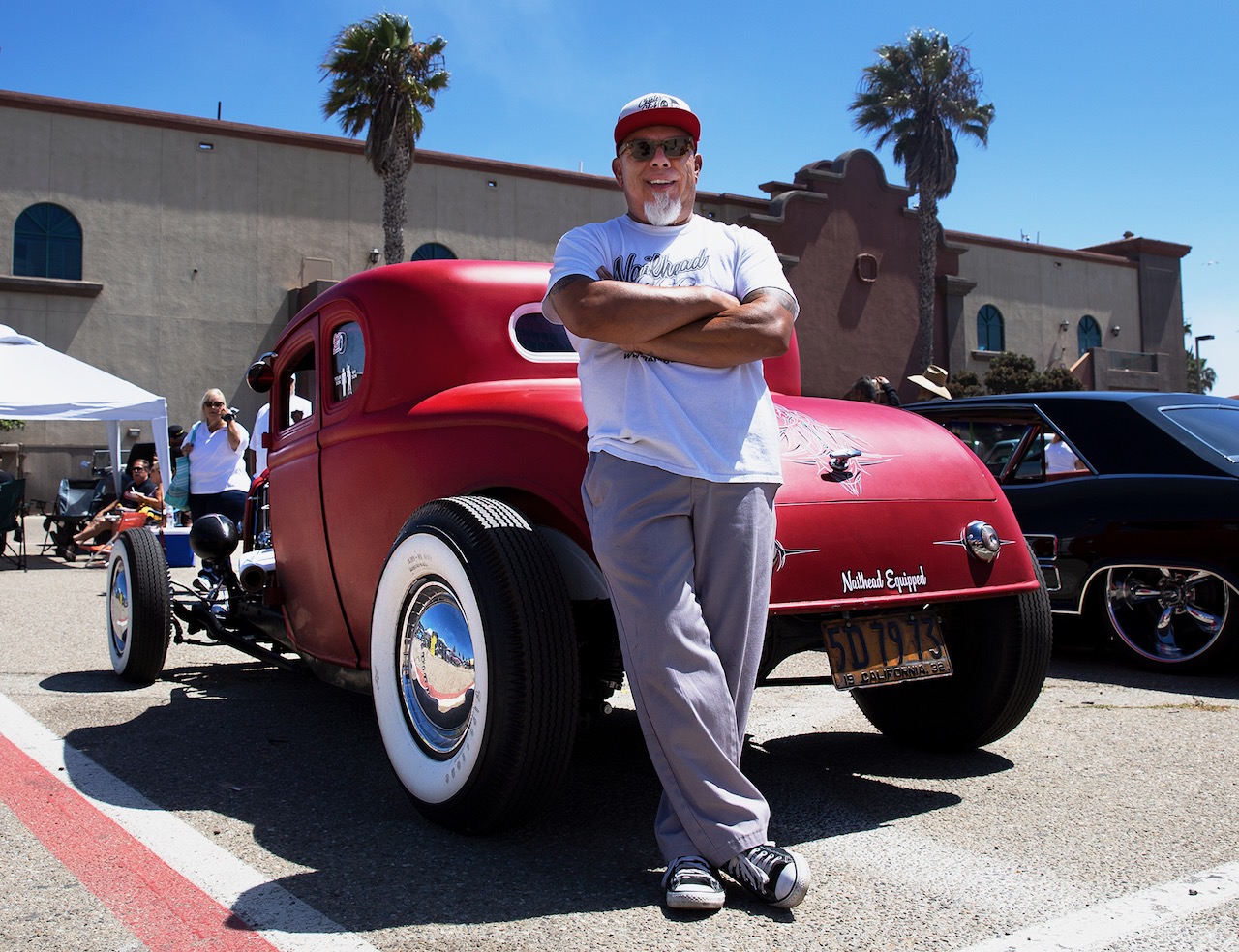 OK, flashback to the beginning of this report where I was talking about all the love firing-up this Car Guy gathering. It must be the love of hot-rodding that motivated Ed here to get up at 2 AM and drive his matte-red, 425-inch Nailhead Buick-powered Coupe from Sacramento to Ventura to make a showing at the VENTURA NATIONALS: RODS, CUSTOMS, BIKES & GUITARS! That’s over 500 miles each way and, according to Ed, he would be driving back home the same day, but not before he grabbed a classic drive-thru burger. You gotta love it!