Skip to content
If eight is great, twelve is torrid. The only substitute for cubic inches is
more cubic inches! 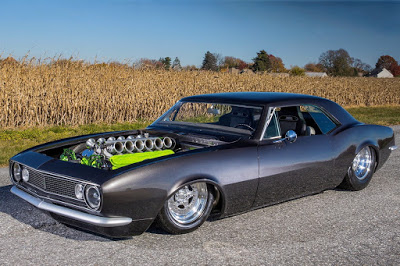 A Camaro, just off the assembly line, can offer its owner power, style and performance without much additional effort. Streetable Camaros are not uncommon on the National Parts Depot showfield at the Carlisle Chevrolet Nationals. Along with daily drivers, the grounds have even more cars, Camaros or otherwise that have seen many aftermarket upgrades. Every car at Carlisle may turns heads, but none will turn more heads than this V12 Camaro that will be part of the indoor Building T display. That’s right, a 12-cylinder car is coming to Carlisle in June.

Mike Heim, Quality Custom Rides, owns this V12 Camaro. He is bringing the V12 to the Carlisle Chevrolet Nationals after a smashing debut at SEMA in the fall of 2016. While guests will want to see the entire car, the engine itself will be getting a bulk of the attention. 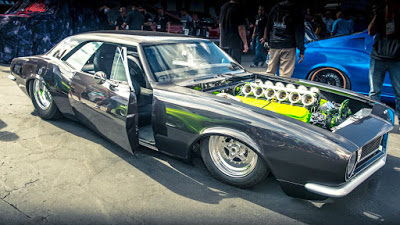 Matt and Shane Corish of V12LS.com designed this massive power source. The Australian based team debuted this car with Mike at SEMA last fall and it stole the show; articles are still being written about it months later.

The Gen I Camaro has seen not only its engine bay modified to house the wicked V12, but the car itself has been chopped, its rockers shortened and floor moved up. Heim even diligently worked to add suicide doors and take over an inch out of the roof, giving the car a look not seen on an F-Body car.

All this engineering excellence will stand front and center June 23-25 at the Carlisle PA Fairgrounds and not only will the car be at Carlisle, so will Heim. Guests can see him, ask questions and pick his brain about the time, money and efforts that went into this car. And by the way, if any car lover happens to want one of their own, a production/short block version of the V12 will be available starting this year for around $35,000 per engine and a turn key version would see pricing determined by the specific build requests of the customer. 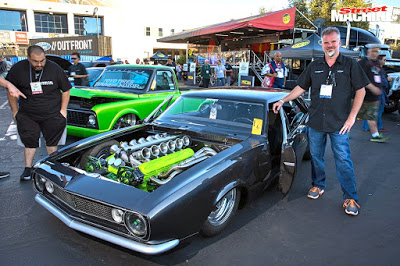 “I was approached by the V12LS guys looking for a car to put a V12LS motor in for a test mule,” said Heim. “The only car I had was my own Camaro that I was working on and since I own a shop, I don’t get a lot of time to work on my own projects,” continued Heim.”

“This is a car I have had for almost 30 years and is the first car I ever bought. The design that went into this project was one I drew up in 1991, but never had time to actually work on. This motor was the push I needed to finish it,” added Heim. “They came to my shop and saw the car and asked if we could get it to SEMA. That was December 2015 and we got it there by October 2016. Showing it to the public at Carlisle will be great, as it’s the Camaro’s 50th anniversary. I am a first-generation nut and the timing couldn’t be more perfect!”