In the 1920s, Ettore Bugatti created the most luxurious car in the world – TYPE 41: BUGATTI ROYALE – truly fit for a King! 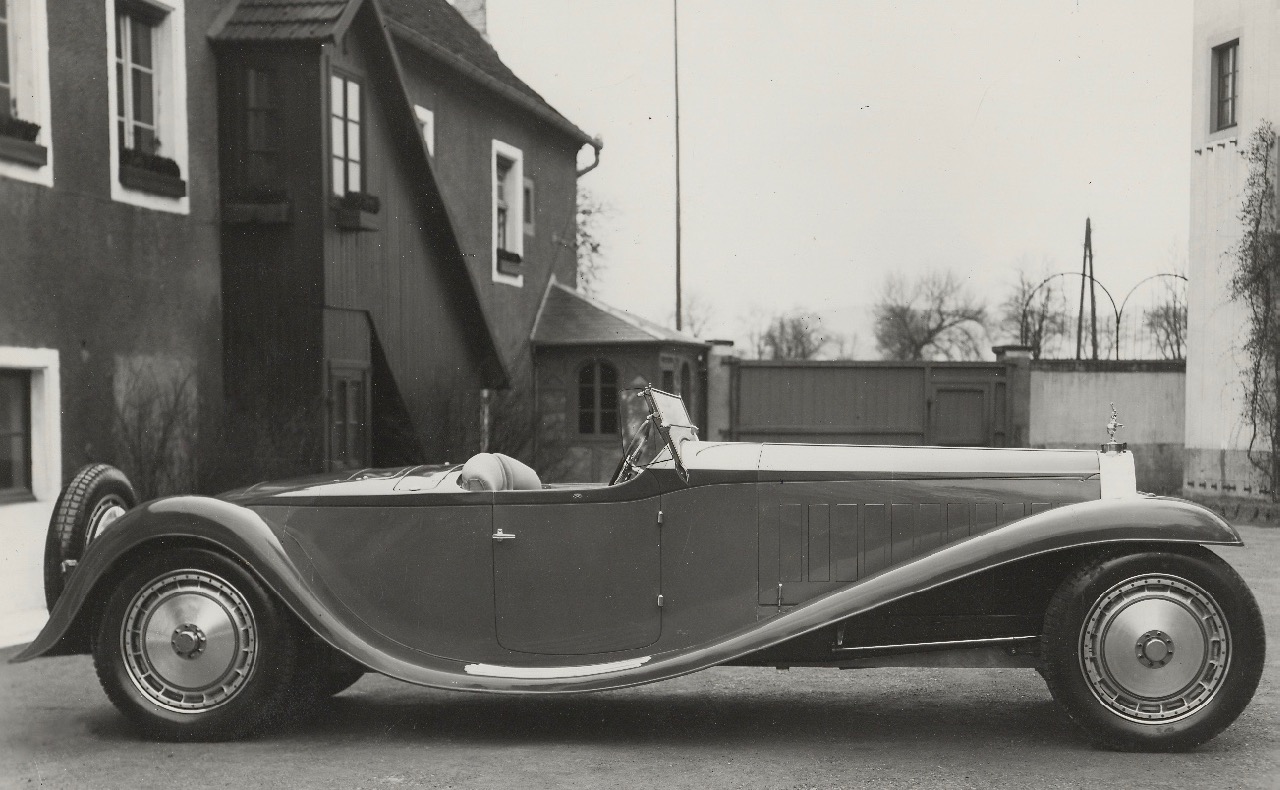 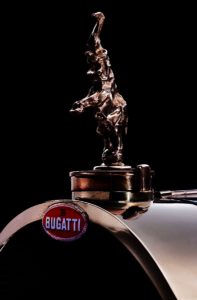 With the Type 41 Royale, in 1926, Bugatti presented the strongest, largest and most luxurious automobile in the world, characterized by unimaginable power and opulent equipment. For Ettore Bugatti, the Royale was the culmination of his creation. It was a vehicle that knew no competitors in terms of performance, quality and image. TYPE41: BUGATTI ROYALE was a vehicle for emperors, kings and queens. Simply put, “Royale” – the royal!

With a wheelbase of 4.3 meters and a length of over six meters, the Royale was the largest, most powerful and most magnificent car ever built in Molsheim. With a price of at least 100,000 Reichsmarks, it was around three times as expensive as similar limousines from other manufacturers and exceeded the price of other Bugatti vehicles about 10 times. Selected customers received the chassis with the drive and grille. As was customary at the time, independent and famous body construction companies such as Kellern & Cie, Weymann (coach, below), Binder, Bugatti, Weinberger and Park Ward took care of the set up. Company founder Ettore Bugatti invested a lot of time and money into the development and went all in.

Everything about the vehicle was unique. An aircraft engine that company founder Ettore Bugatti designed in 1927 on behalf of the French government, served as blueprint for the powerplant – at that time with a displacement of 14.7 liters and 300 horsepower. Under the long hood, a 12.8 liter inline eight cylinder engine was used in production vehicles, also with about 300 horsepower. 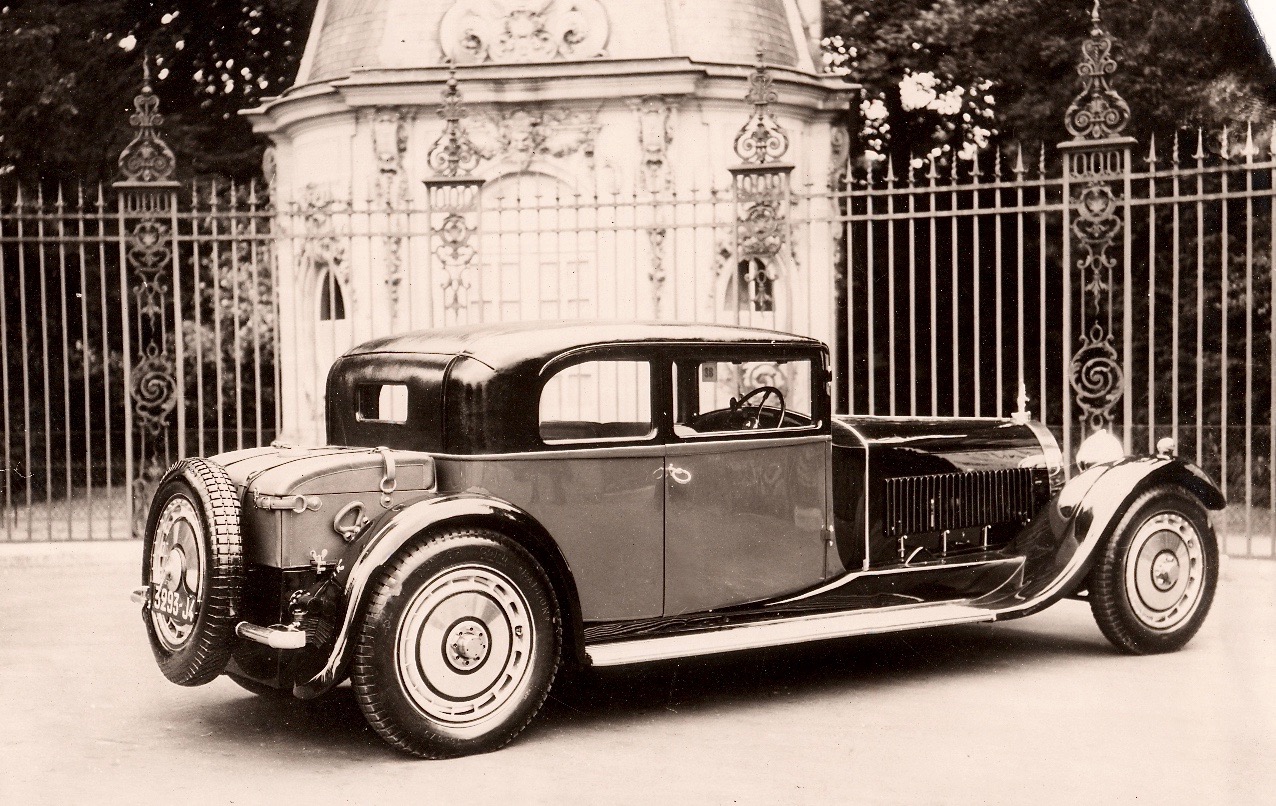 It managed to propel the vehicle, which could weigh up to 3.5 tons (depending on the body), to 200 km/h, approximately 125 mph. The engine remained discreetly in the background: redlined at around 1,800 rpm. A dry sump lubrication system pumped 23 liters of oil to the required points; 43 liters of coolant oil kept the temperature in balance. A vertical shaft connected the crankshaft and camshaft together, the long crankshaft sat on nine plain bearings. The extraordinary drive needed space; to open the bonnet, two fitters were needed to unlock and fold up the extra-long hood.

A multi-plate dry clutch that was shifted via a three-speed gearbox transmitted the power to the rear wheels. Bugatti doubled the quarter elliptical suspension on the axles in order to achieve more comfort. Solid alloy wheels with slots ensured that the large brake drums did not overheat. The 200-liter fuel tank ensured enough range. 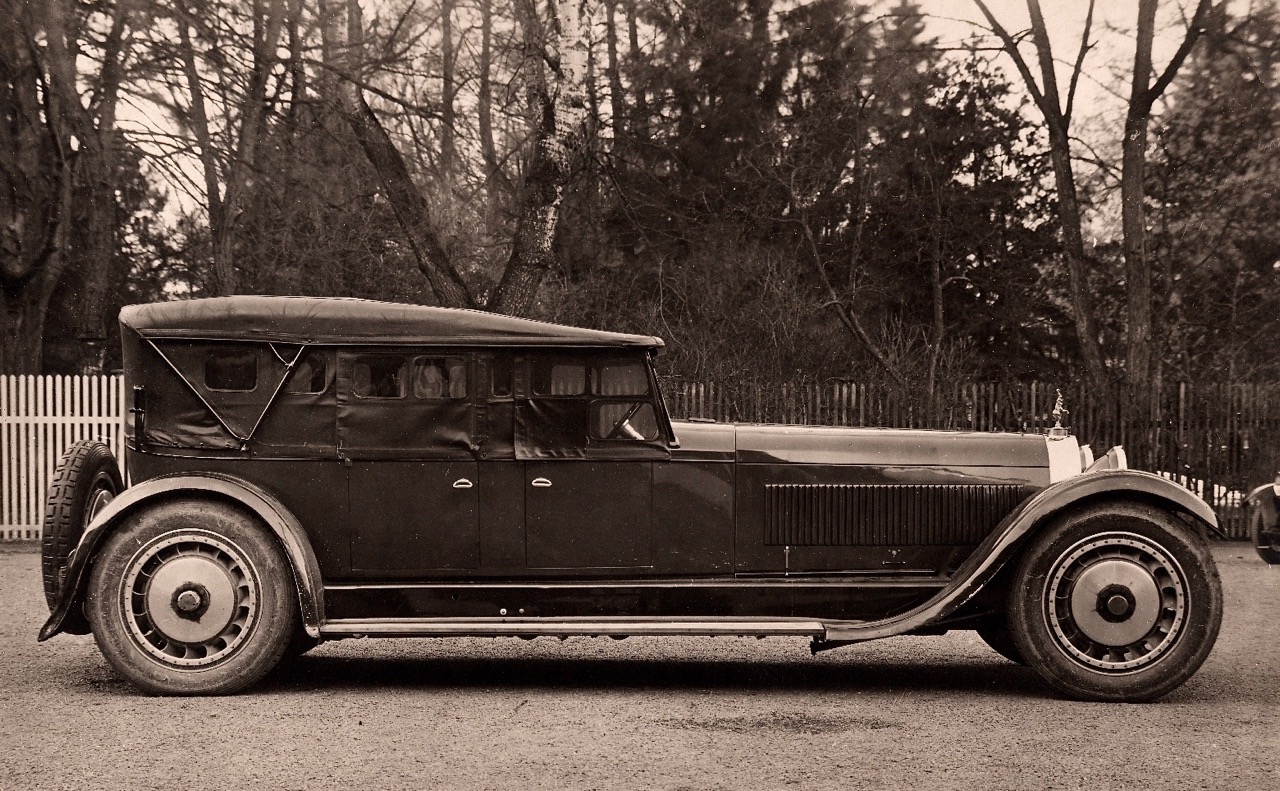 The first prototype was built in 1926, but it was based on a longer wheelbase and a larger engine with a displacement of 14.7 liters. It wasn’t until 1932 that Bugatti sold the first Royale to the Parisian industrialist, Armand Esders. An extremely elegant roadster body, below, by Jean Bugatti sheathed the eight-cylinder engine and drivetrain. Since Armand Esders only wanted to drive his vehicle during the day, the Roadster did not have headlights – giving it a more elegant look. Three other vehicles with different bodies went into customer hands. Overall, a Cabriolet, a Pullman limousine, a travel limousine with a folding top and a two-door limousine were built in the few years to come. In the Coupé Napoleon, the passenger communicated with the driver via an electrical intercom. The Royale is the only Bugatti vehicle to have a hood ornament. It features a dancing elephant, designed by Ettore’s deceased brother Rembrandt Bugatti, a well-known artist and sculptor.

Despite its extraordinary features, the Royale did not go on to be an economic success. The global economic crisis and its aftermath made prospective buyers hold back. Up until 1933, six models of the ultra luxurious Royale were built, only four of them were sold. Ettore Bugatti would be chauffeured with a Royale – or drove it himself. His wife also preferred a Royale as a means of transport. All vehicles still exist today, including two in the Cité de l’Automobile, Schlumpf Collection, in Mulhouse, France, and one at the Bugatti Headquarters in Molsheim. Each one of the six Royale vehicles can be considered as one of the most exclusive and expensive vehicles in the world. If one of them were ever auctioned, it could be the most expensive car in the world. Although Bugatti didn’t manage to sell many Royales, its construction was still a success. Bugatti modified the eight-cylinder engines that had already been produced, to use them for a new project – as units of motor coaches for express trains for the French railways. In just nine months, Bugatti designed and developed an express train based on the huge engines.

From 1935 to1958 these engines were used in the new four-axle rail multiple unit that Bugatti developed for the ETAT state railway, known today as SNCF. Depending on the version, an SNCF XB 1000 required two to four of these huge motors with an output of 200 horsepower each. During the first test runs, a train reached 172 km/h, approximately 107 mph – making it the first modern high-speed train. The SNCF ordered a total of 79 of these rail vehicles with the Royale engines, conducting extreme power without vibrations.