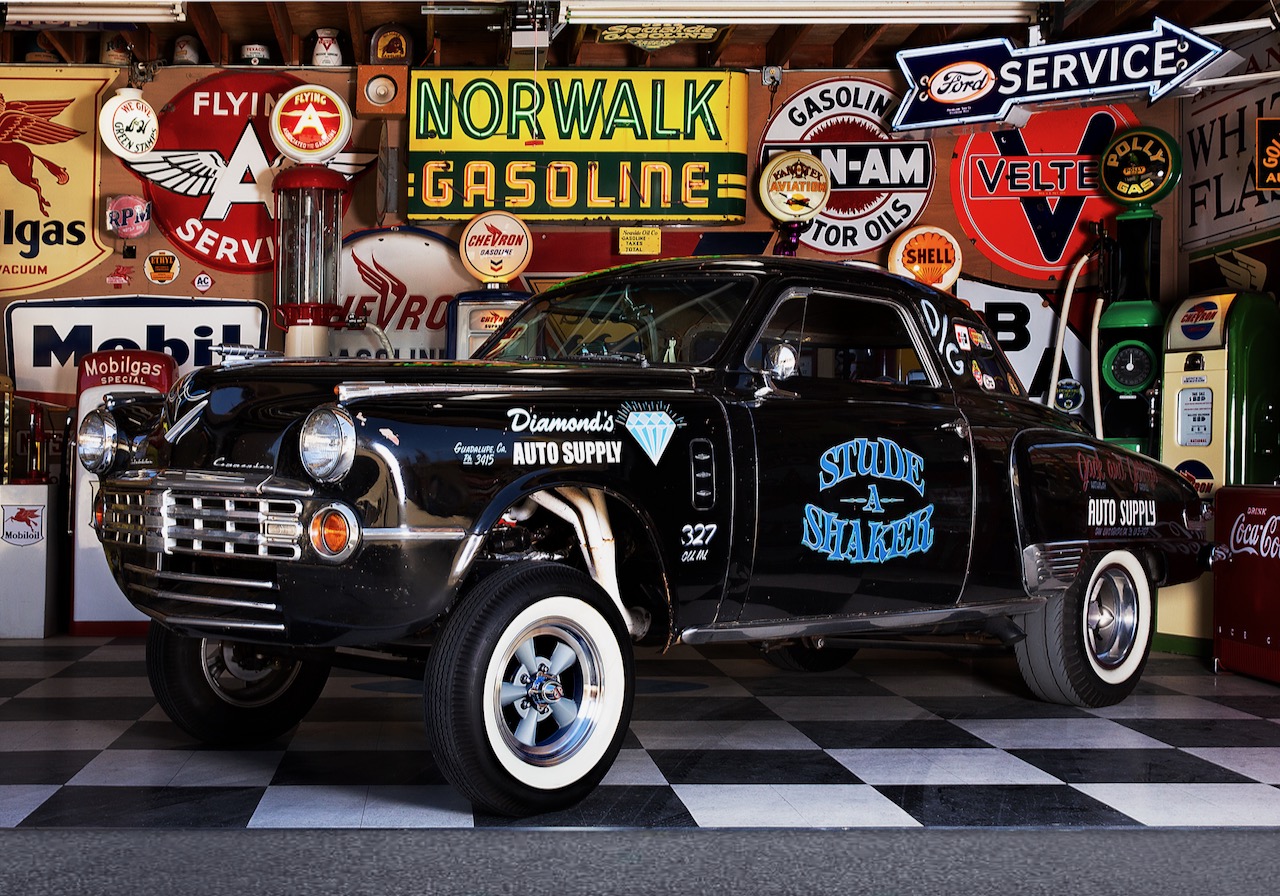 Koufax, Clemente & Mays: Baseball legends who were heroes to legions of young guys in the 1960s – but not Tony LaPolla. It wasn’t the crack of the bat that made his heart race, but rather the crackle of the supercharged 448-inch Oldsmobile motor powering a wicked ’41 Willys Gasser – owned and campaigned by barnstorming drag racers Stone, Woods & Cook. The legendary Gasser greats replaced Olds engines with Chrysler Hemis, starting in 1964-1965. These were his heroes – along with his hot-rodding father Bill, who notoriously rode his short-pipes BSA through the hallways of Santa Barbara High School! 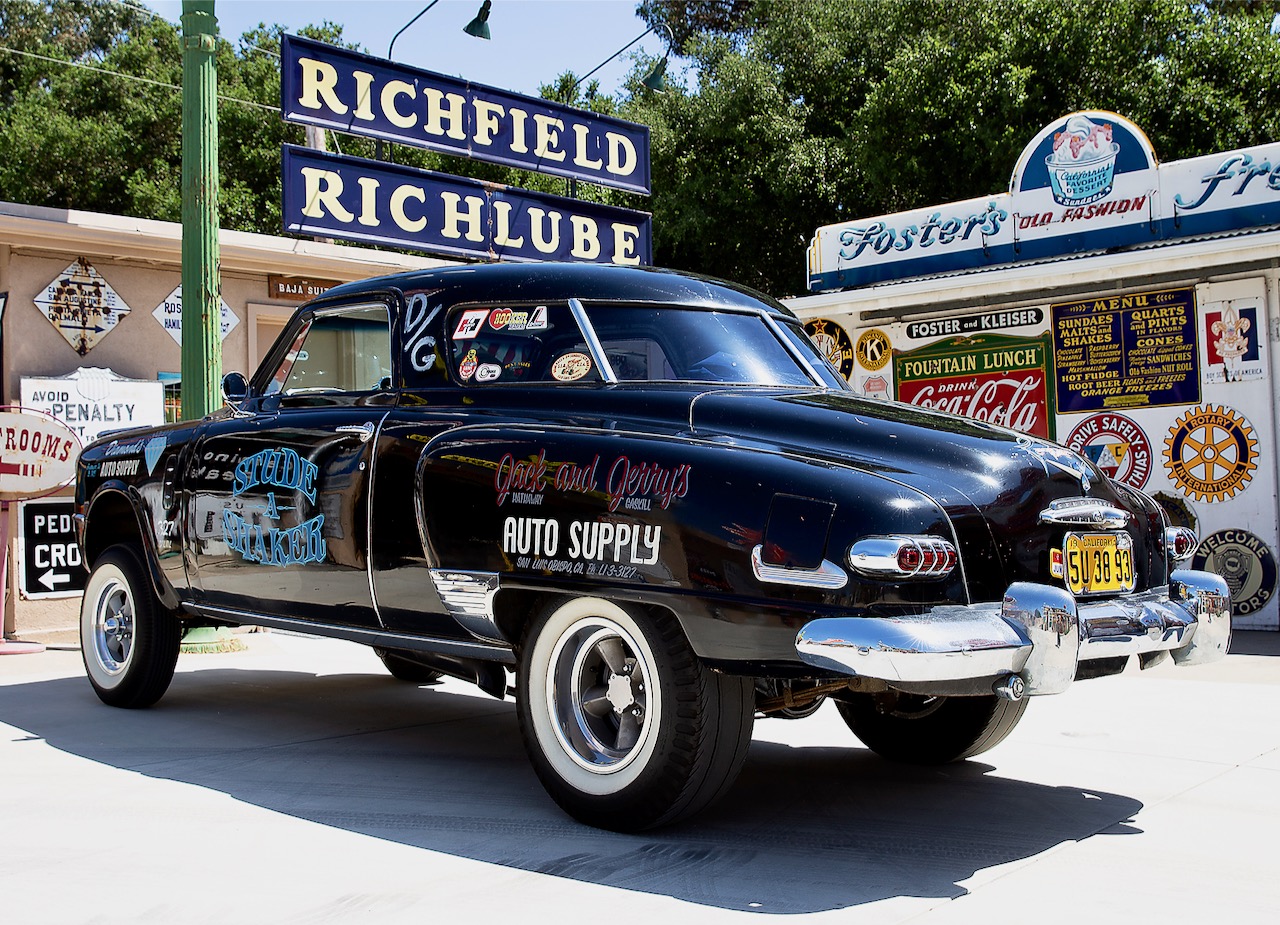 Over the years Tony and his wife Sandy have owned a number of impressive hot rods and classics, but it was always a dream of his to build an early-1960’s Gasser Tribute, one he and Sandy could drive to and from car club events they often attended in Central and Southern California. (Sandy is the Vice President of the Bent Axles Car Club of Santa Maria and her club plaque is proudly displayed on the Stude’s package shelf). When his friend Steve Goodman showed him a ’49 Studebaker Commander that was for sale back in 2018, Tony’s dream started to become a reality. He purchased the car and began transforming the mild-mannered Studebaker into the head-turning STUDE-A-SHAKER: IT’S A GAS-GAS-GAS! 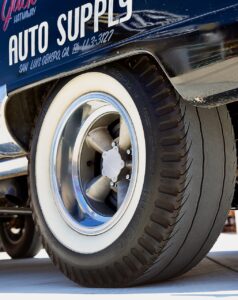 In February of this year Tony decided to retire early from United Launch Alliance and devote more time to his family and, to continue shaking-down and improving his spunky “Shaker.” When editor Marty Schorr suggested I do a story on Tony’s unique D/Gas Studebaker, I immediately thought what better a location for a Gasser photo shoot than the nearby Mendenhall Museum of Gasoline Pumps & Petroliana.

The LaPolla STUDE-A-SHAKER: IT’S A GAS-GAS-GAS! is powered by a vintage camel-hump-head 327 Chevy small-block with finned aluminum Edlelbrock valve covers with Offy breathers, and packed with a mild, lopey Crower cam that strikes all the right notes. A vintage velocity stack gifted to Tony from Gasser owner and mentor Dave Miller crowns the Holley four-barrel sitting atop an Edlebrock aluminum manifold. Eye-catching long-tube Hooker Fenderwell headers were sourced from an early Chevy Nova. The front sub-frame and fenders and hood were assembled as one-piece to create a traditional tilt front end. 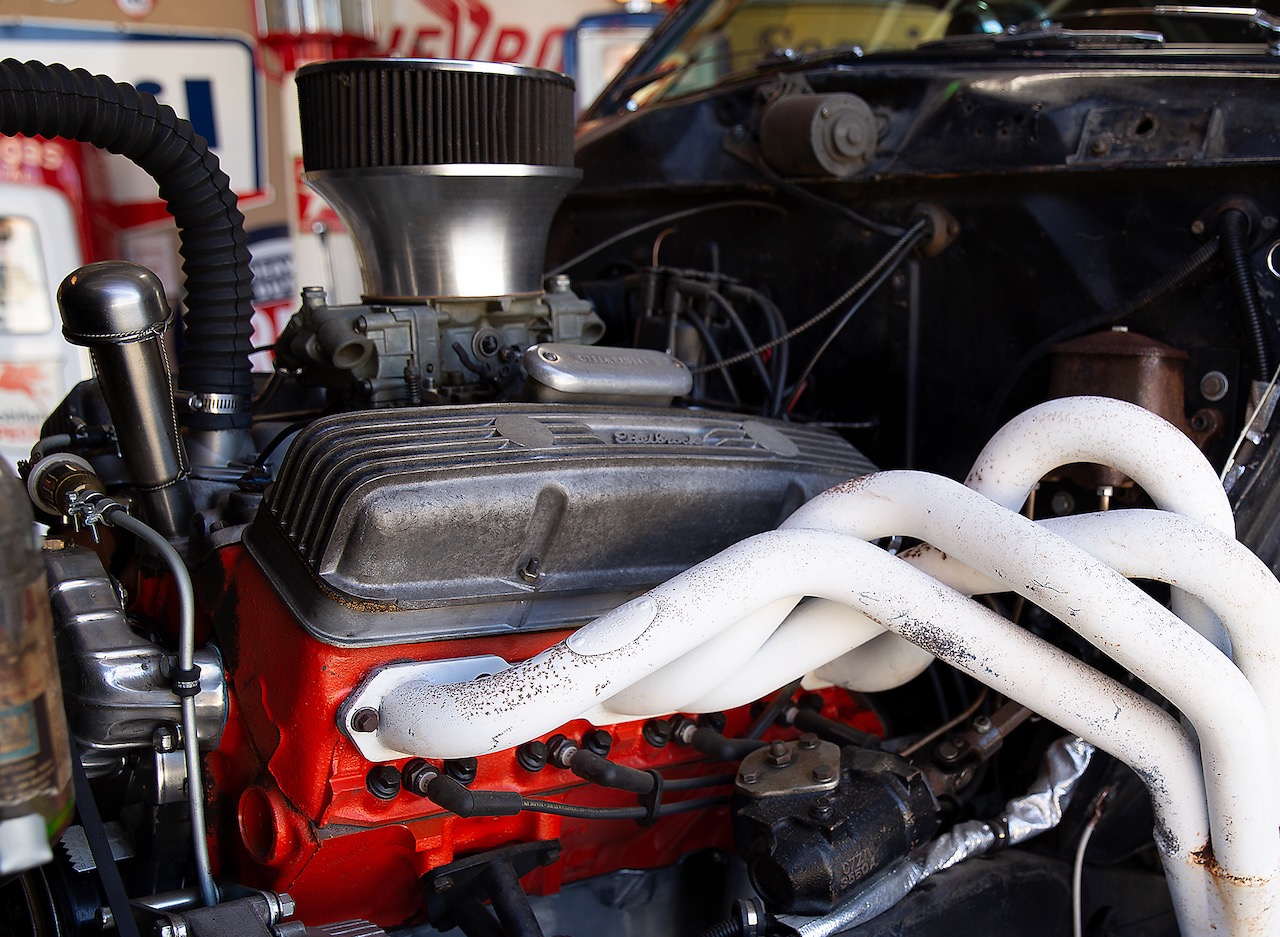 With budget restrictions and safety in mind, Tony used a straight-axle kit and long traction bars to achieve the “lifted” vintage Gasser geometry for better tire grip, and then he wisely added disc brakes. Firestone Dragster pie-crust cheater slicks from Coker look period-correct and smokin’ good on American Racing Torq-Thrust mags. The Tribute’s interior sports a dash-mounted Sun tach, some extra gauges, and a vintage T-handle Hurst Ramrod shifter with Line-Loc, hooked to a smooth-shifting, street-friendly Muncie M-20 four-speed. There’s always a “brain-bucket” resting on the rear seat just in case Tony gets the urge to make a quick-trip down the strip! 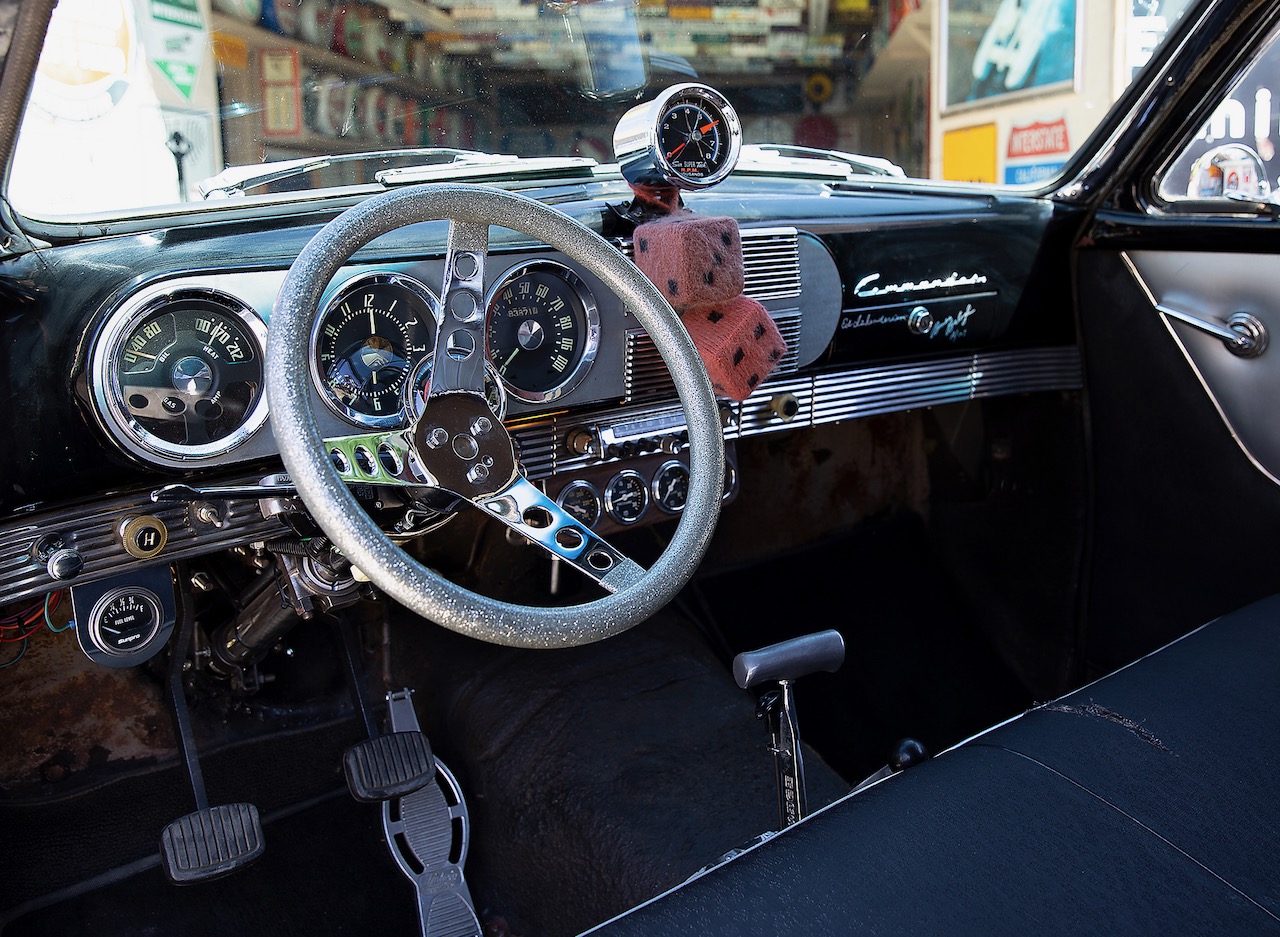 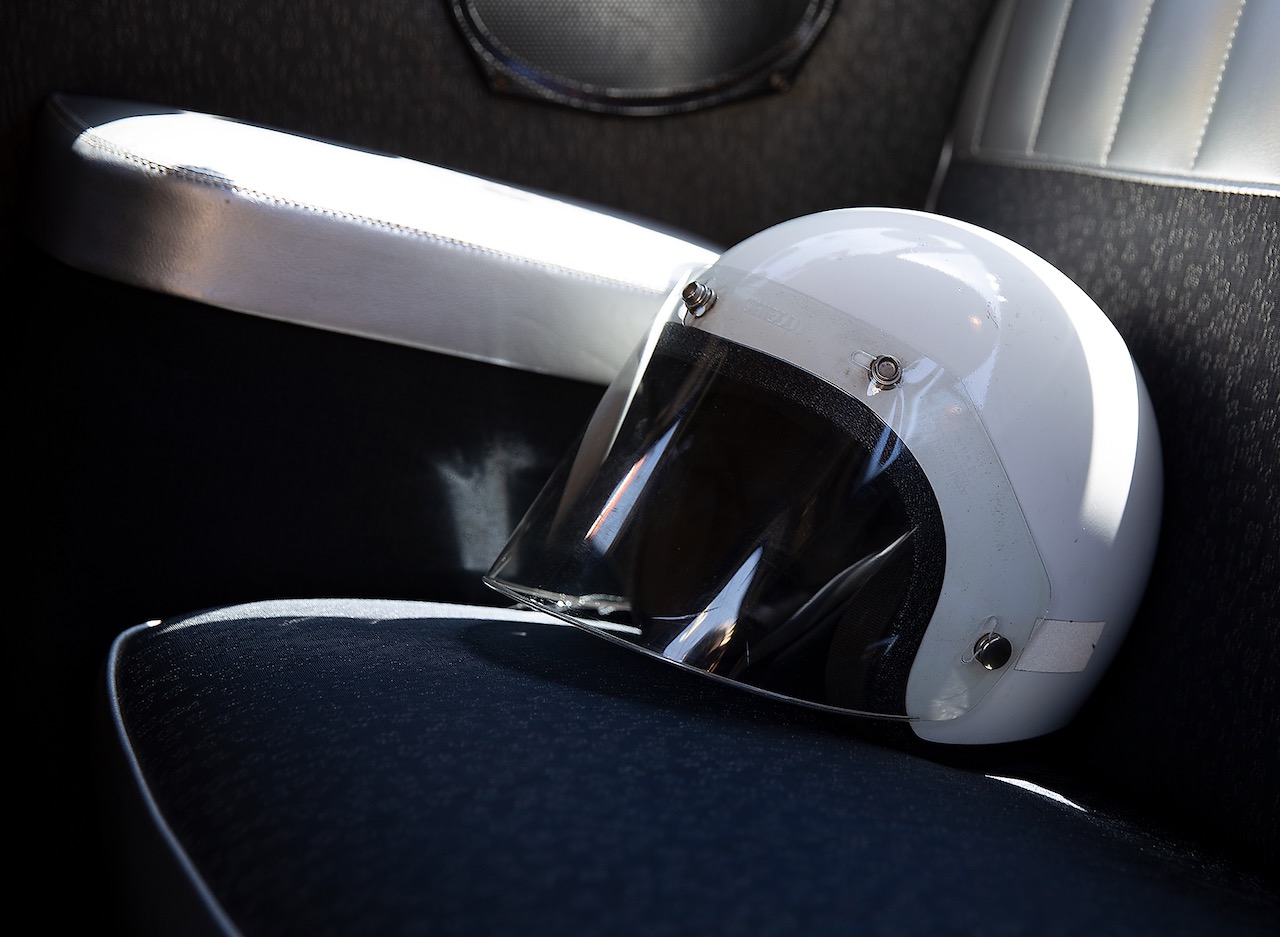 As I was shooting and talking to Tony it became abundantly clear that he feels indebted to the founding fathers of the early California drag racing scene, and in particular, to Central Coast area drag-racers and organizers, Jerry Gaskill and Vic Diamond. They not only raced, but were instrumental in starting and operating the Santa Maria and San Luis Obispo Drag Strips. The Foster Road Santa Maria strip was the third legal and second NHRA-sanctioned drag strip in the country. His love of this history is more than lip service, as he proudly displays period-correct graphics and decals for these gentlemen and their 1960s-era businesses on his Gasser. 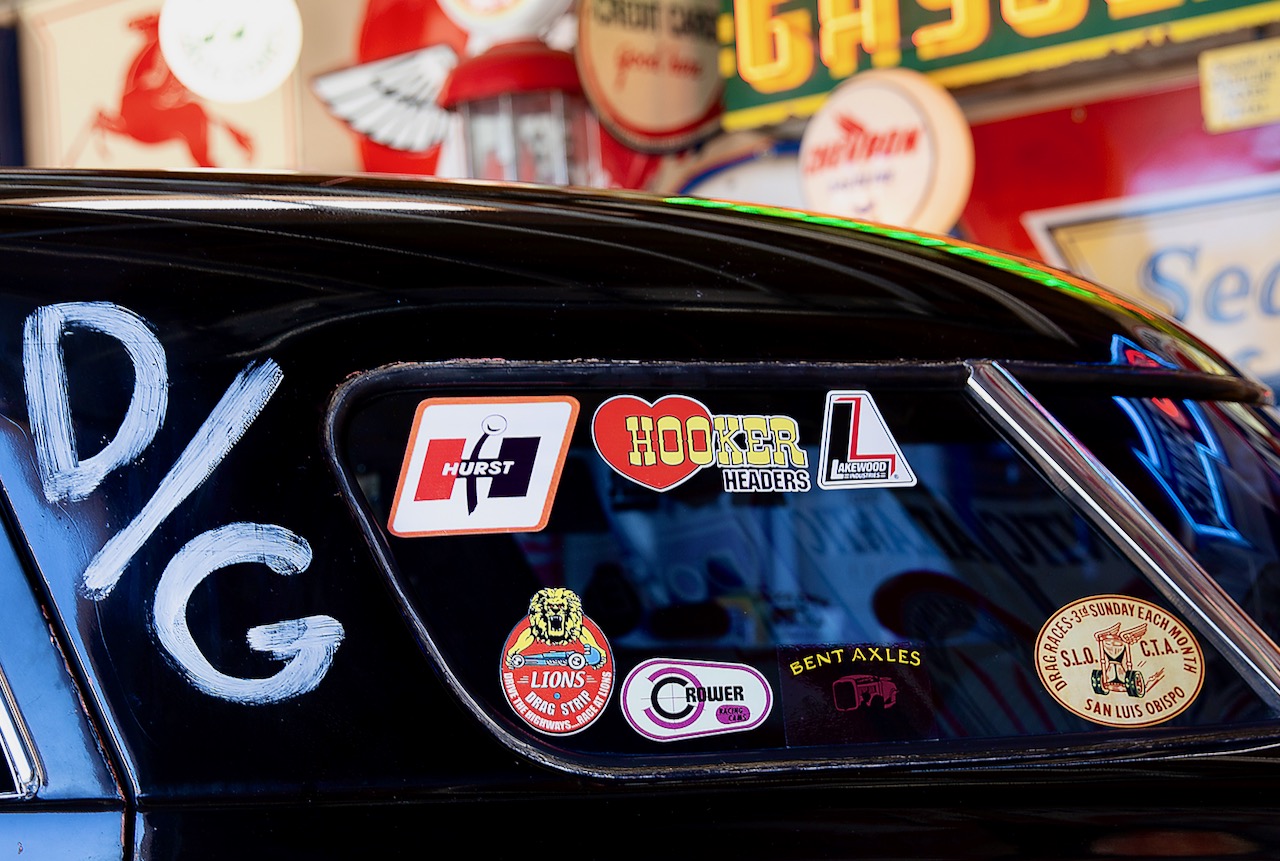 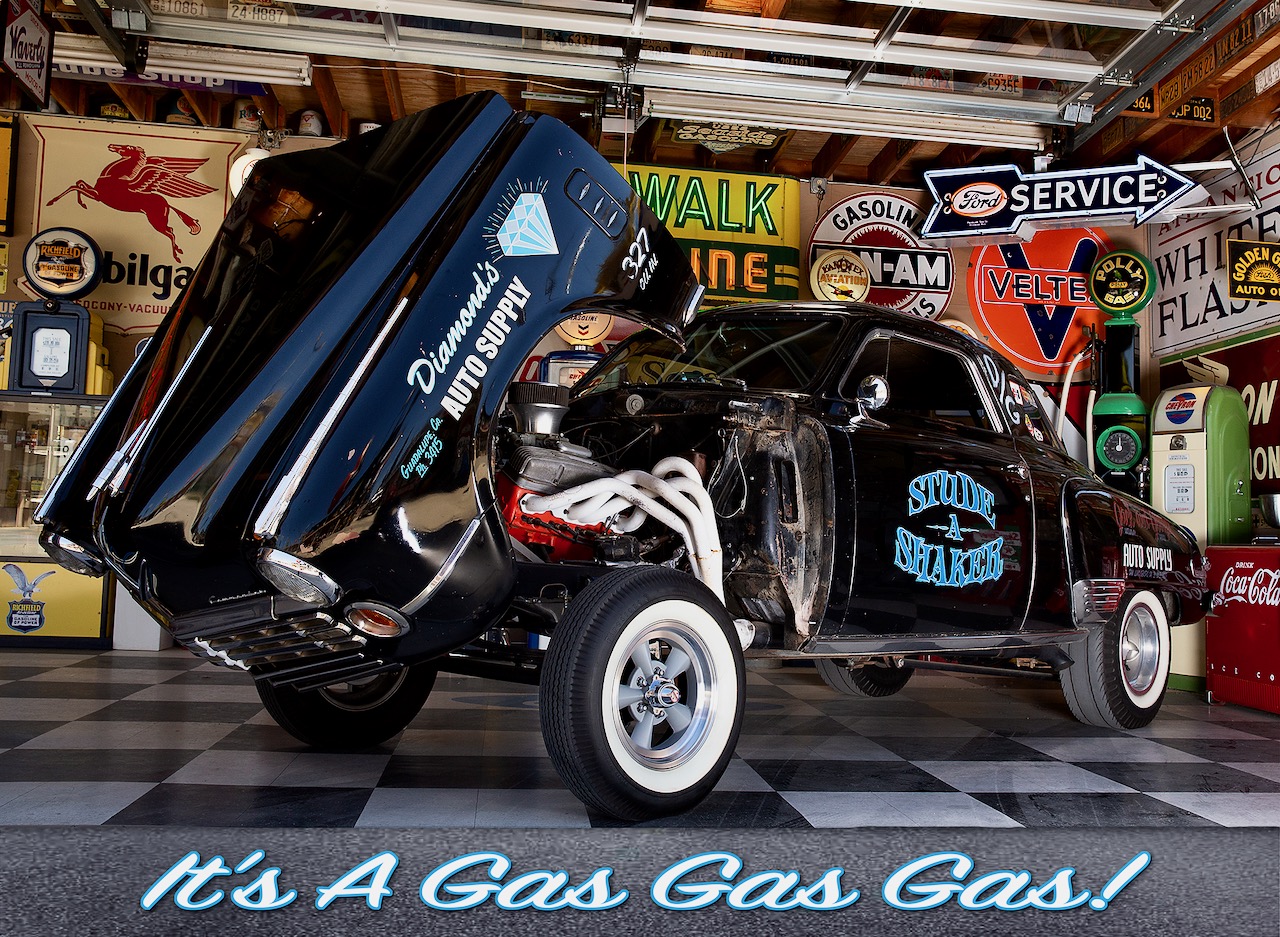 I’d be remiss if I didn’t add a special thank you here to the Mendenhall Museum’s Mark and Vicki for their hospitality. Like many privately owned, niche businesses affected by Covid restrictions, they have had a struggle since 2020. It is such a special place – jam-packed with extraordinary treasures from our automotive and gasoline history – and definitely worth a special trip to Buellton, California. Look for a special report about the Mendenhall coming soon to Car Guy Chronicles. For more information, including tour schedules, please visit, http://www.mendenhallmuseum.com/