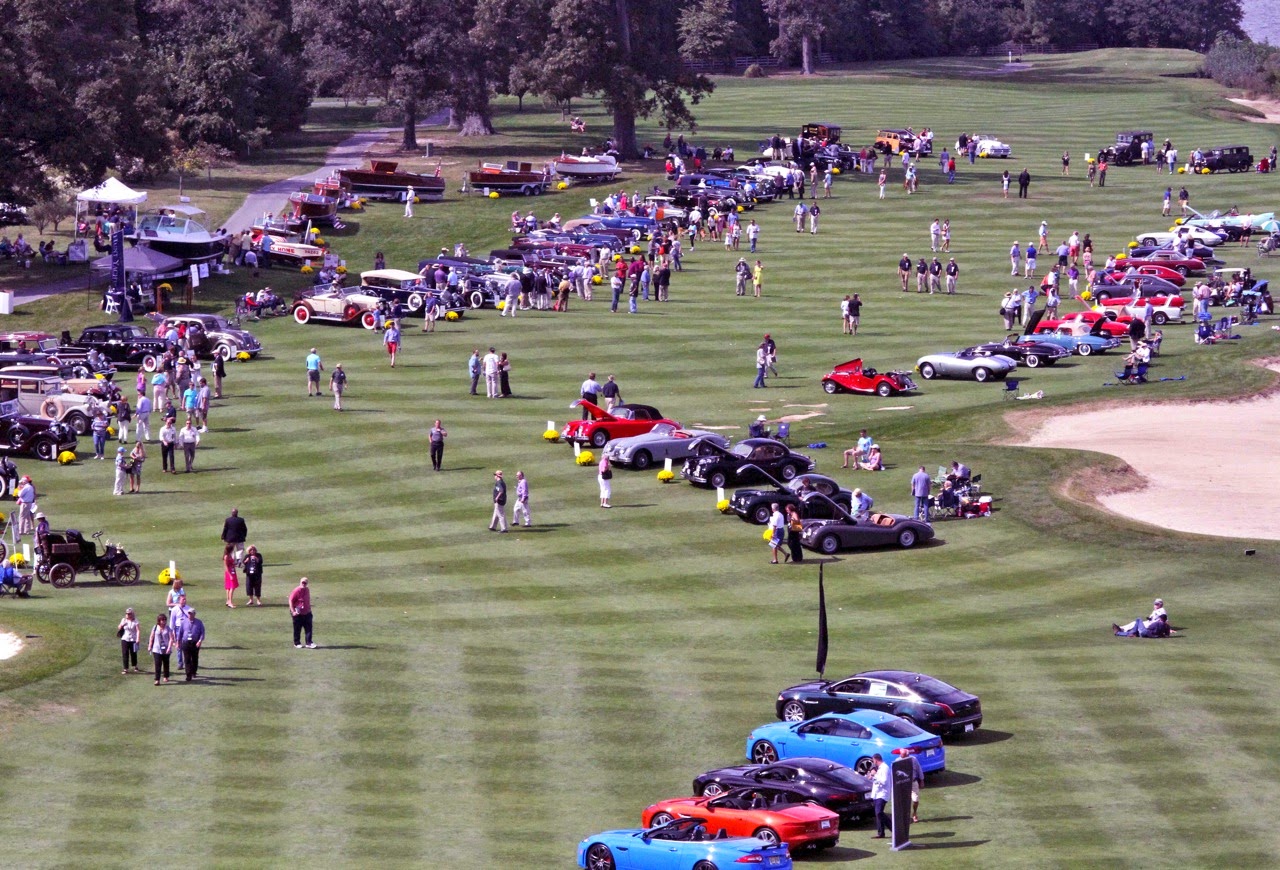 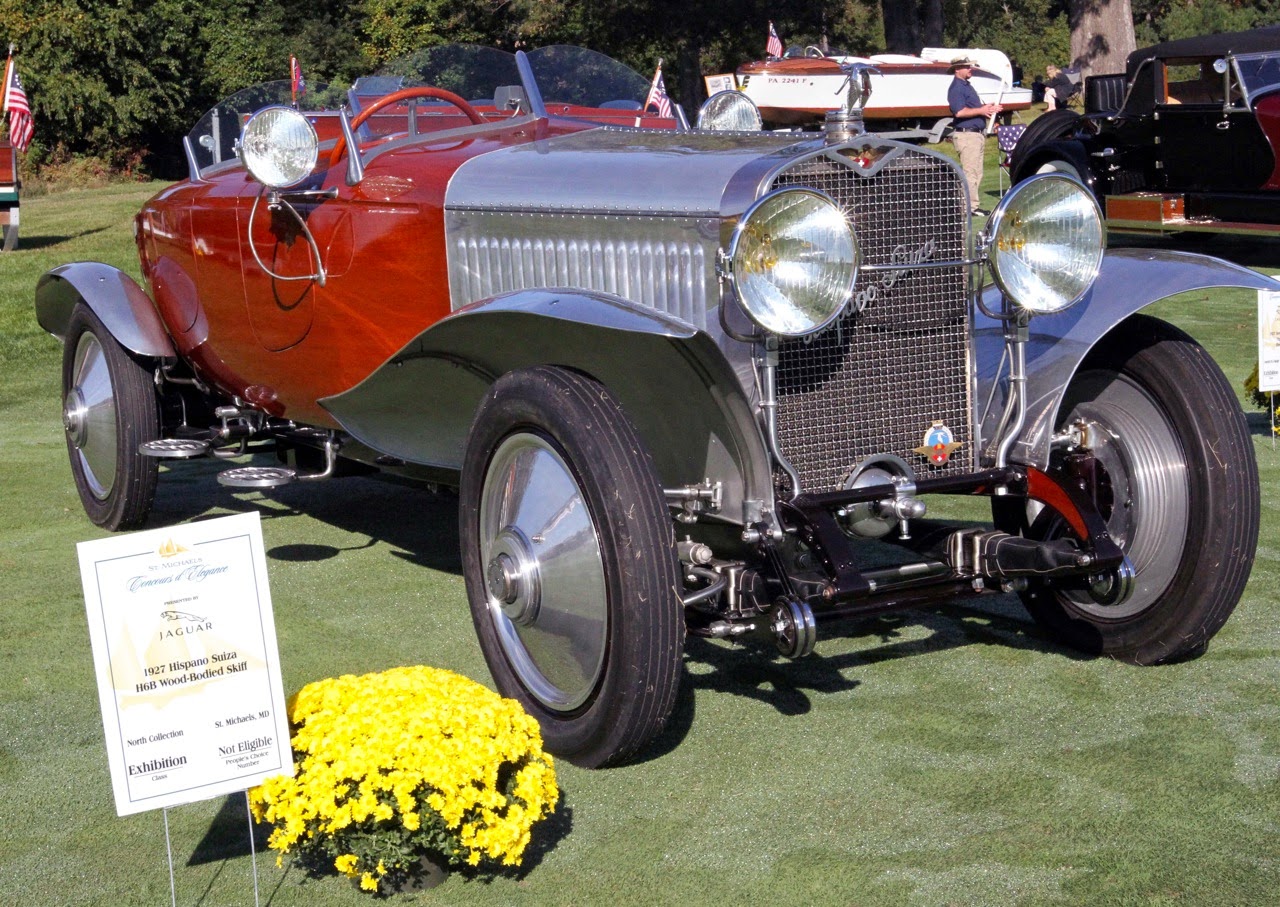 For the eighth year, George Walish, Chairman & Founder, welcomed all to the Hyatt Regency Chesapeake Bay Golf Resort, Spa and Marina for the St Michaels Concours d’Elegance. Nestled on the Eastern Shore in Cambridge Maryland, the show occupied a manicured fairway, top, at the River Marsh Golf Club. The Concours benefits the Mid-Shore Community Foundation.

Early automotive history is littered with long gone distinctive automobile manufacturers. Among them was the Spanish/French nameplate of Hispano-Suiza. The North Collection reminded us of the marque’s contributions with their ‘27 H6B Wood-Bodied Skiff, above. It represents a high point of styling, engineering and performance. 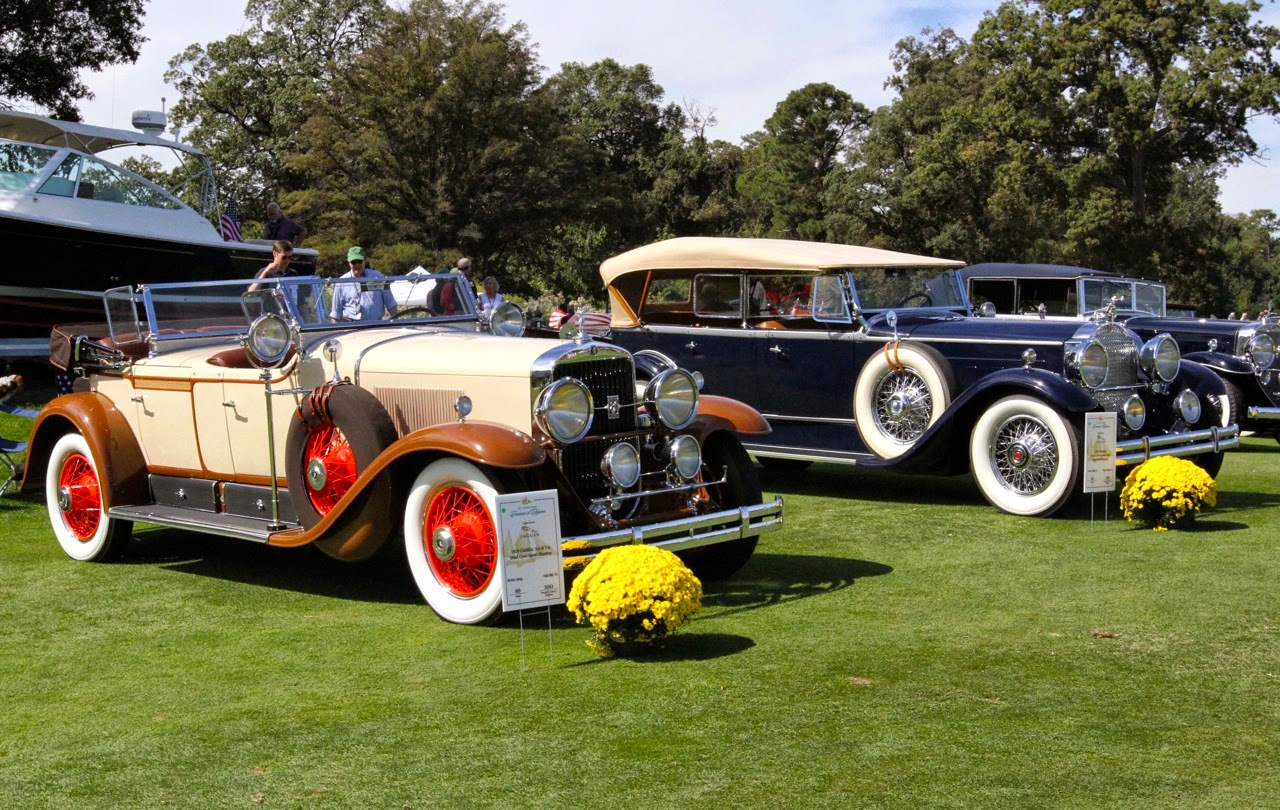 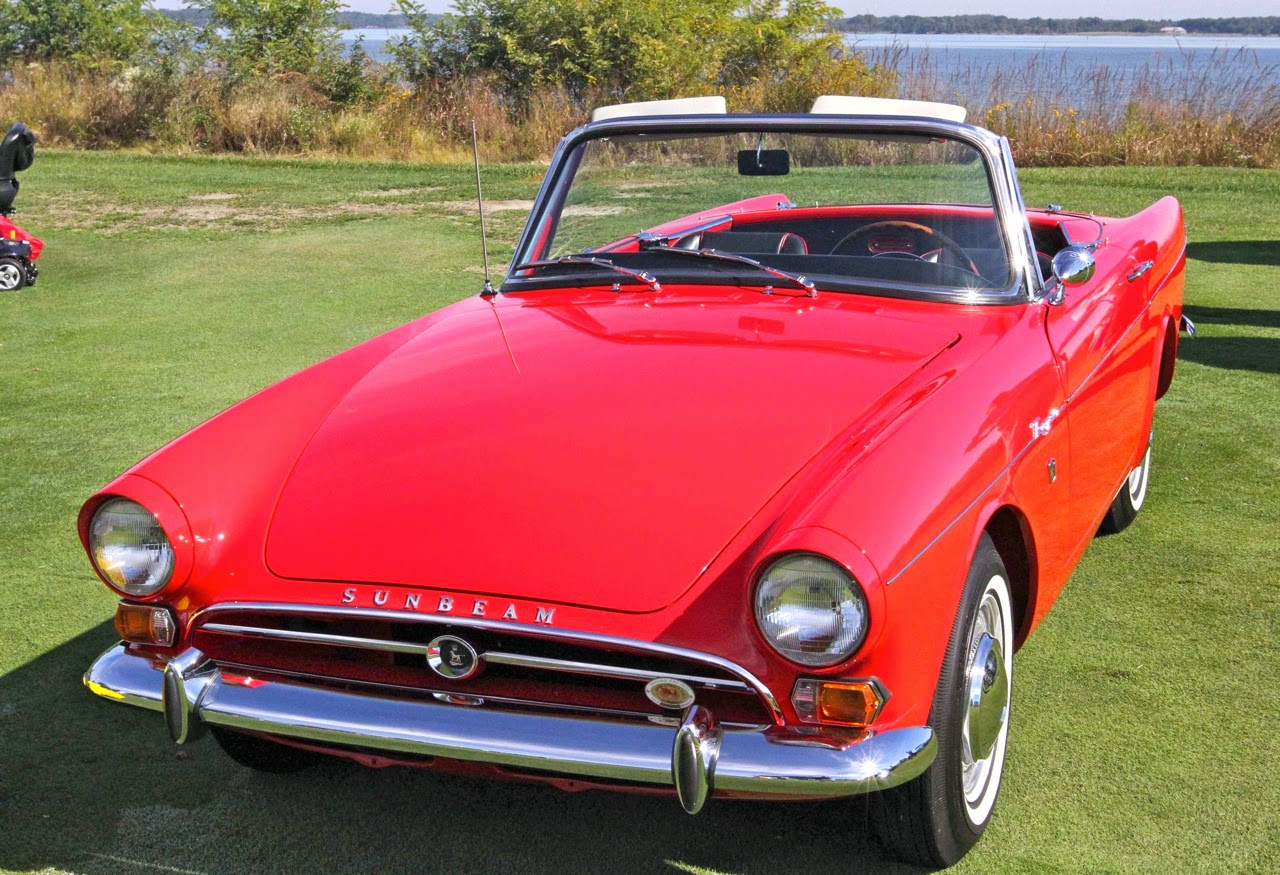 James Lindner showed his 1965 Sunbeam Tiger MK l, powered by a 260-inch Ford small-block. It was hard to believe it was an older restoration and is driven regularly, but sparingly.  It’s a very early car, completed in the first month of production in June 1964. 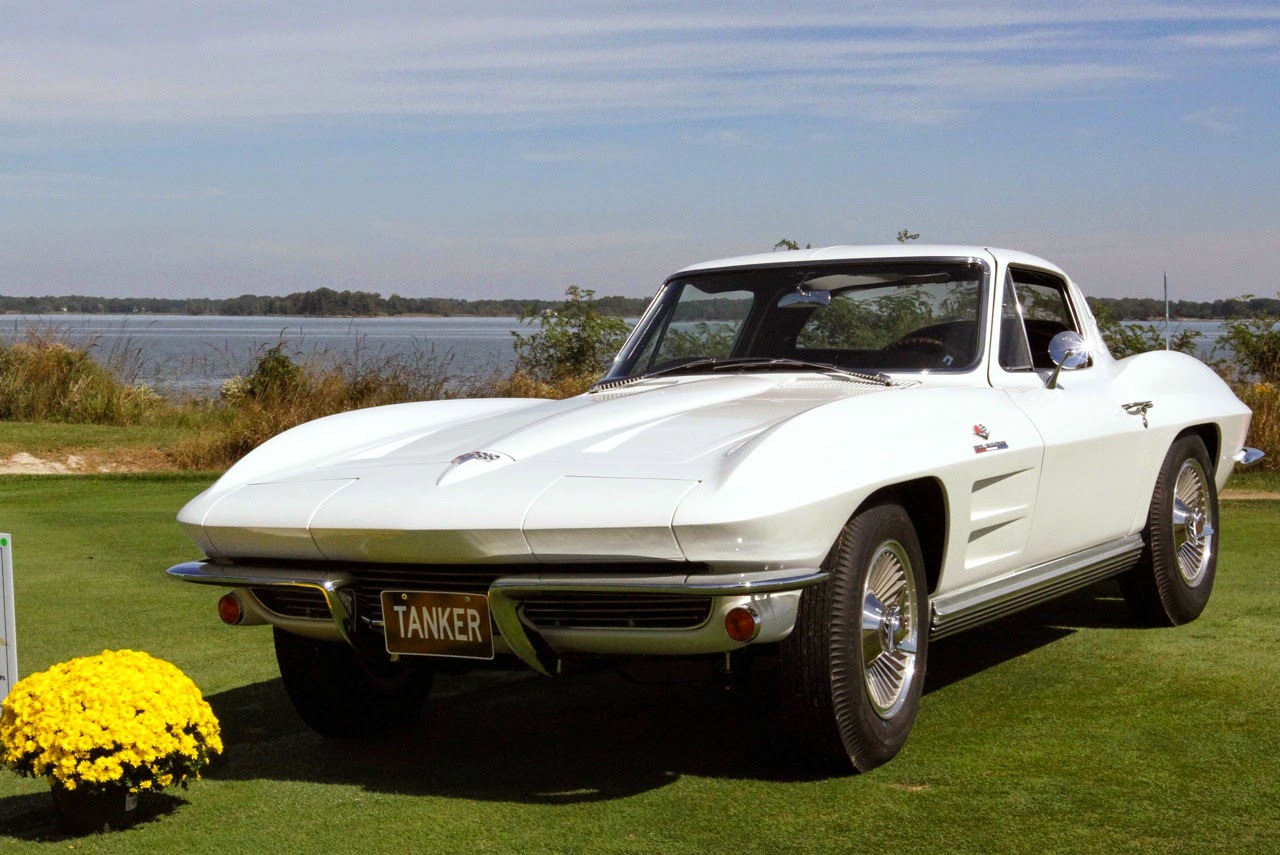 You may not feel Corvettes are all that uncommon, but closer inspection uncovers the rarity of L. Cranston’s recently restored ‘64 Sting Ray. Among its options are fuel-injected 327/375 horsepower small-block engine and 36-gallon gas tank, engineered for endurance racing. Only 38 ’64 Corvettes were built with big tanks in 1964 model year 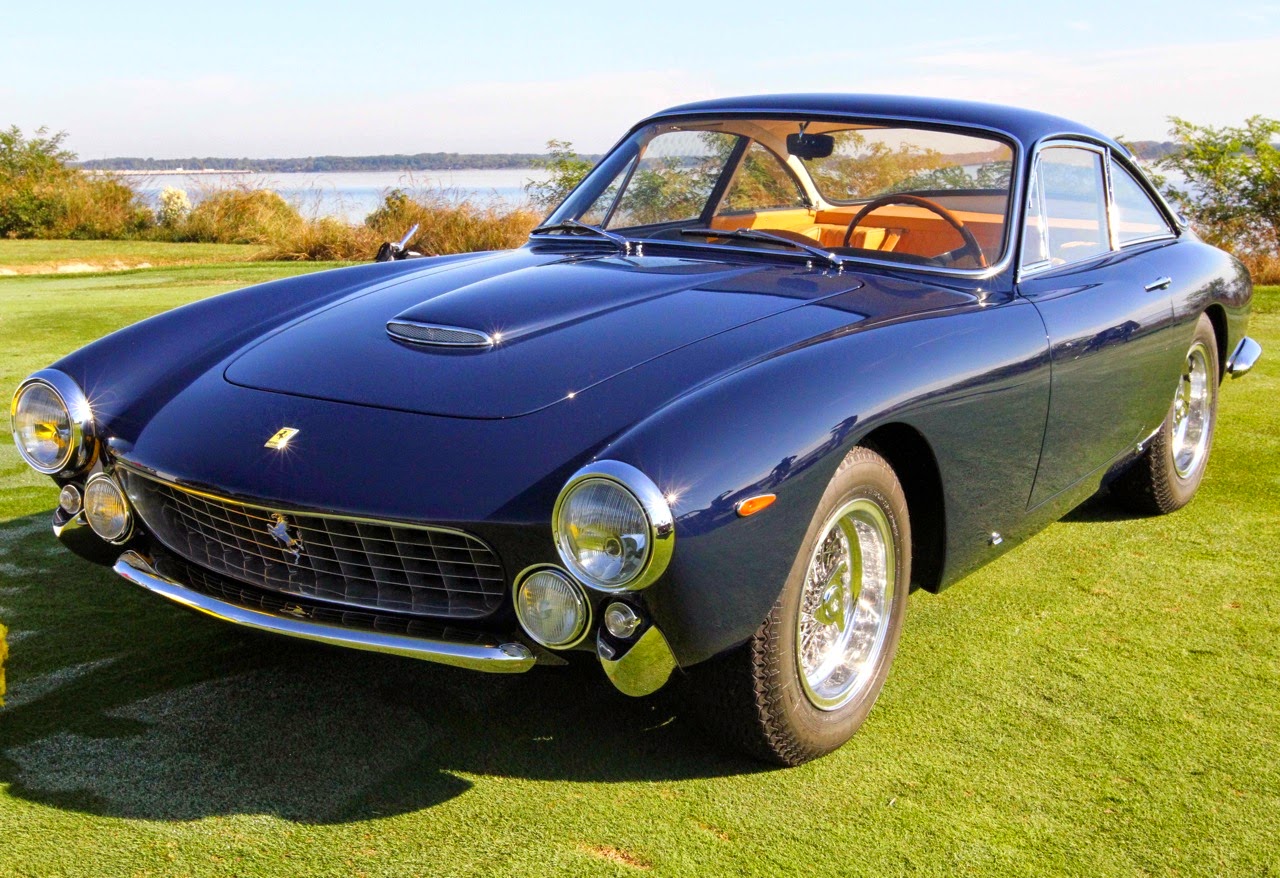 A Concours is supposed to celebrate the art of the automobile and there is probably no more fitting example of such than the BHA Automotive Museum’s ‘64 Ferrari 250 GT Lusso Berlinetta. It’s beautiful and fast! 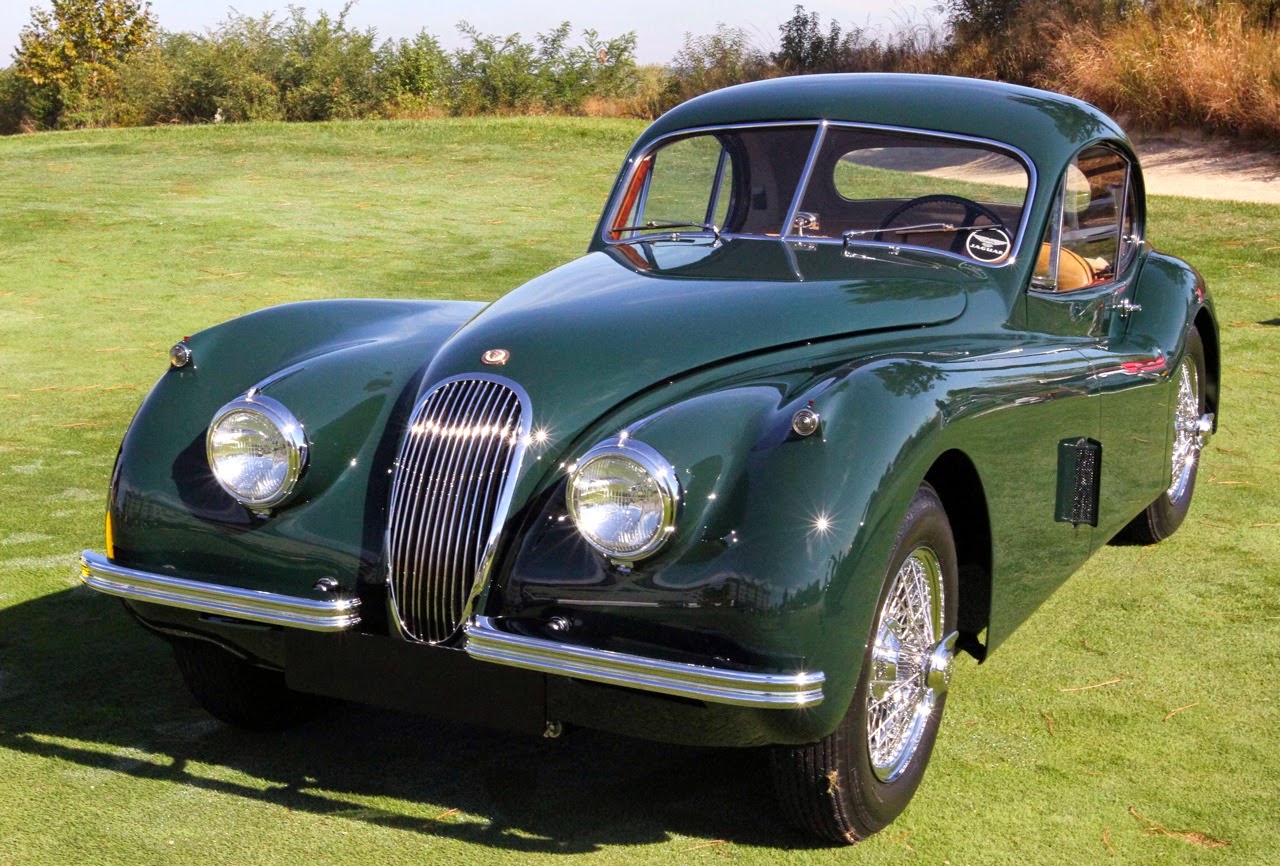 When Jaguar launched the XK120, it created a sensation. Its combination of style and performance had been previously available only in much higher priced cars. Ronald Gaertner’s ‘53 XK120 Fixed Head Coupe is the higher horsepower SE version. 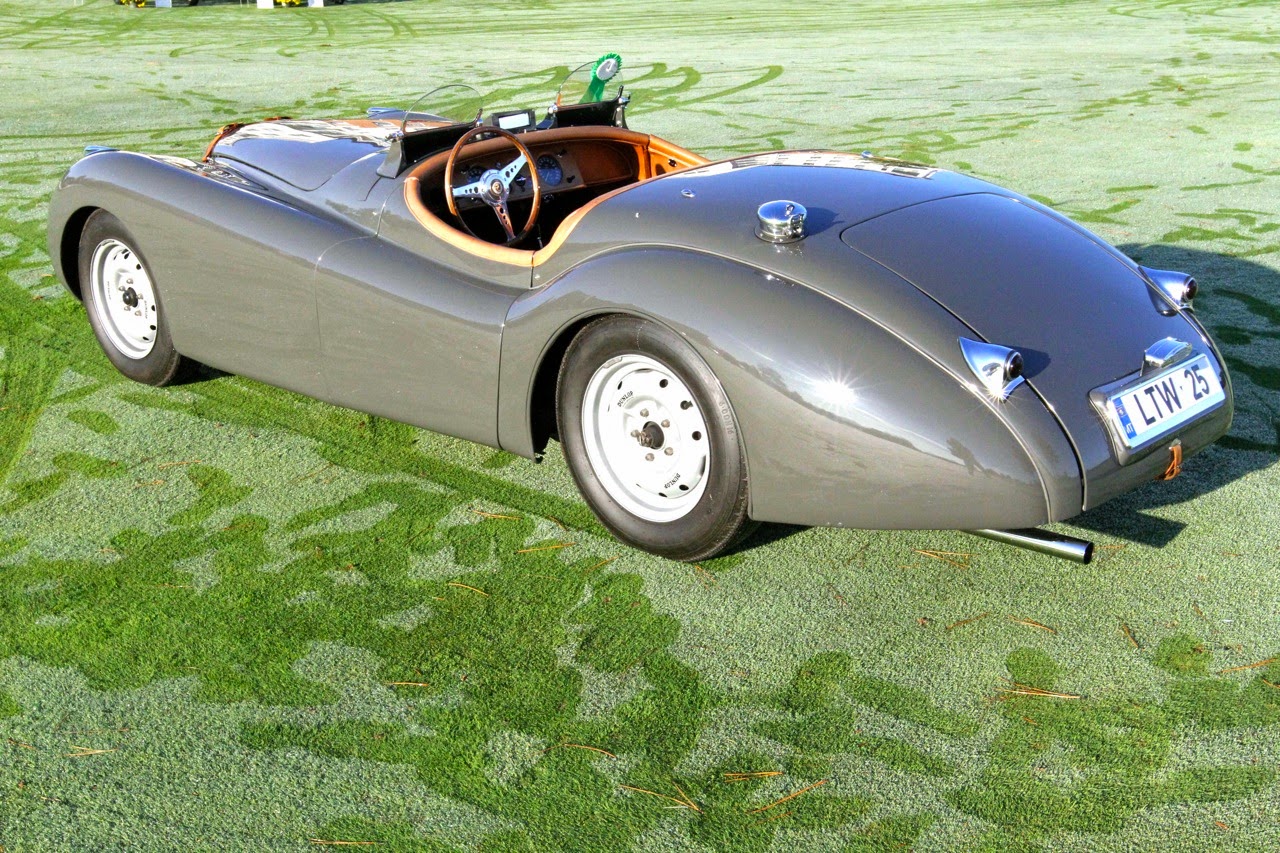 Ronald Rosner’s ‘49 alloy roadster is one of a handful built for competition and saw early action at the hands of its original owner, sports car pioneer, M. R. J. “Doc” Wyllie. Its engine features a C-Type Competition head, upping the output of the DOHC straight Six. 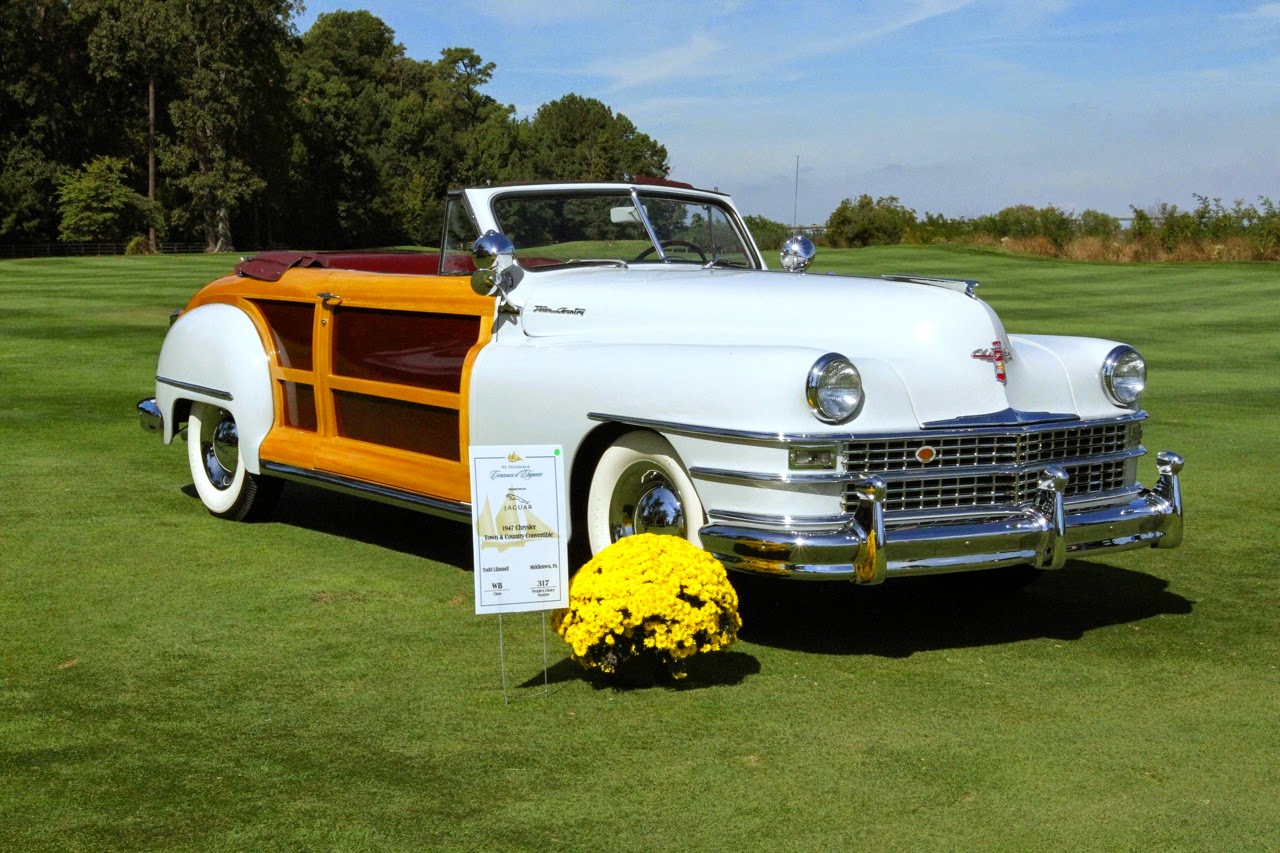 Wood was a common material in early automobiles. But as time progressed, its use diminished. Wood paneling really sets off Todd Librandi’s ‘47 Chrysler Town & Country convertible. 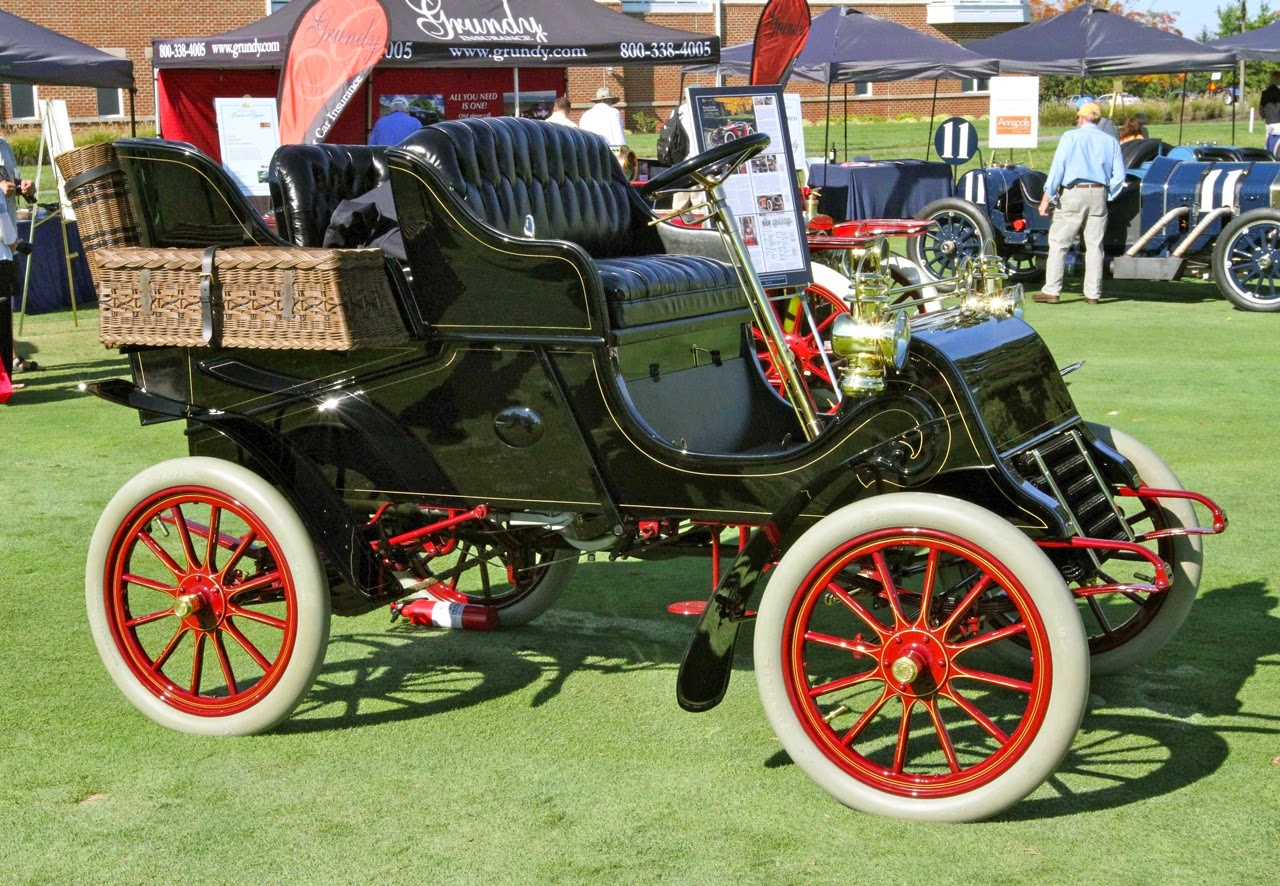 Jim Elliot’s ‘03 Cadillac Model A Rear Entry Tonneau was the oldest car on the St. Michaels show field. Not far removed from its apparent carriage roots, it represented a novelty at the time. Car is a study in detail, from flowing fenders to wicker baskets, striping and brass trim. 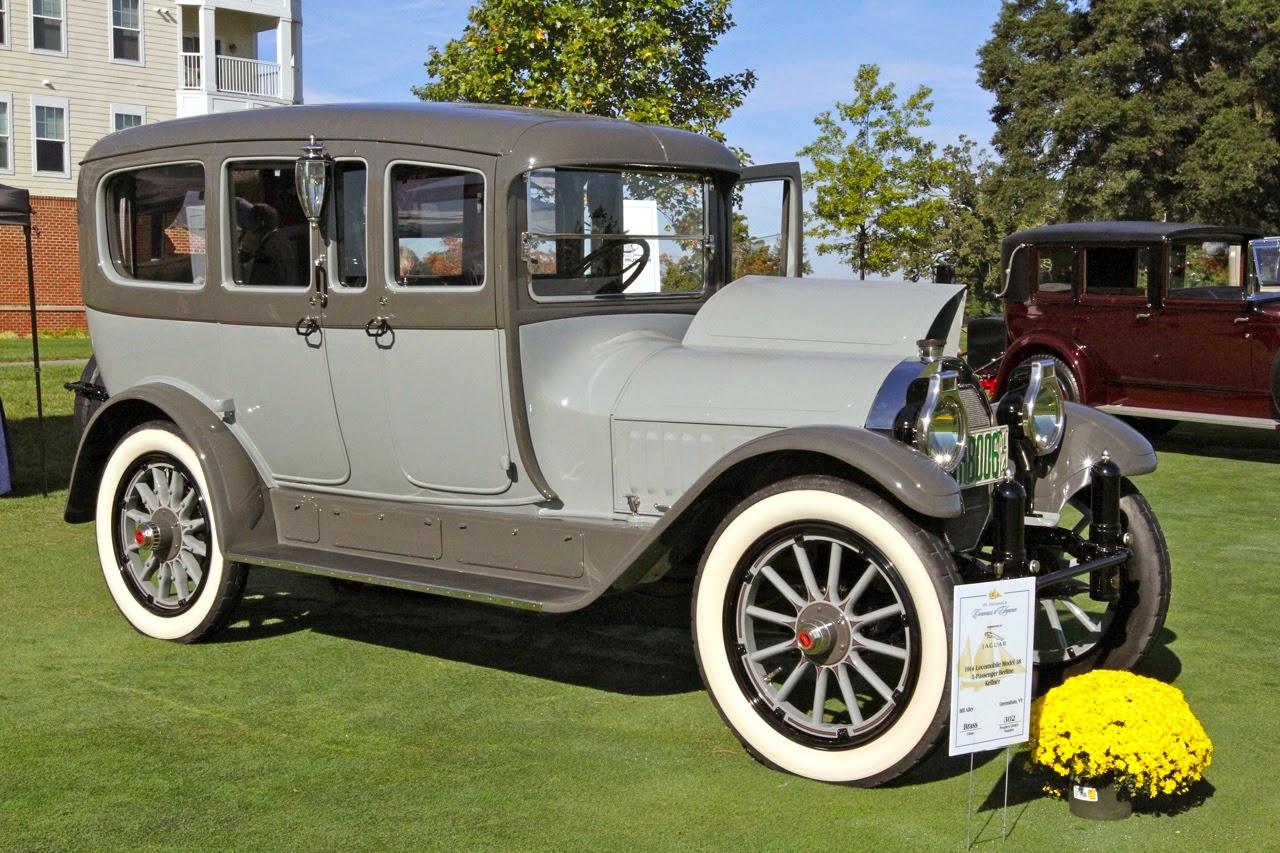 Bill Alley’s ‘14 Locomobile Model 38 Five-Passenger Berline with body by Kellner uses paint to set off its lines. The cylinders on the front suspension were early shock absorbers manufactured by Westinghouse. The car portrayed substantial yet elegant construction, featuring lamps by Tiffany with doors that closed like bank vaults. 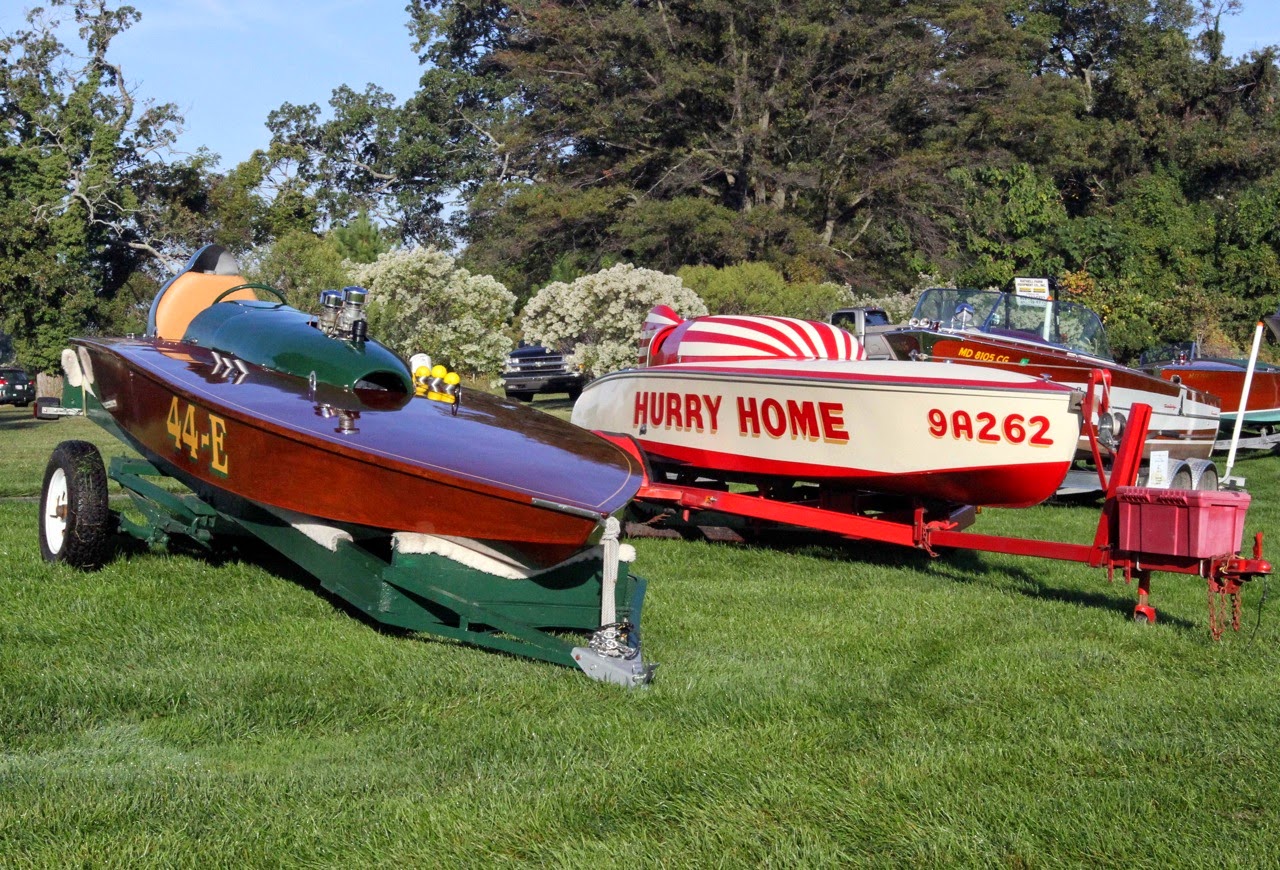 As mainstay on the Eastern Shore’s event calendar, St Michaels can’t help but pay homage to the area’s marine heritage by including boats on the show field. To the left is Tracey Colman’s 16-foot race boat “Renegade” featuring a hot-rodded Ford Flathead. Alongside it rests James Holler’s 19-foot Ventnor, “Hurry Home”. The name was given to it by its first owners who sent pictures of it to their son serving with the Army in Germany. 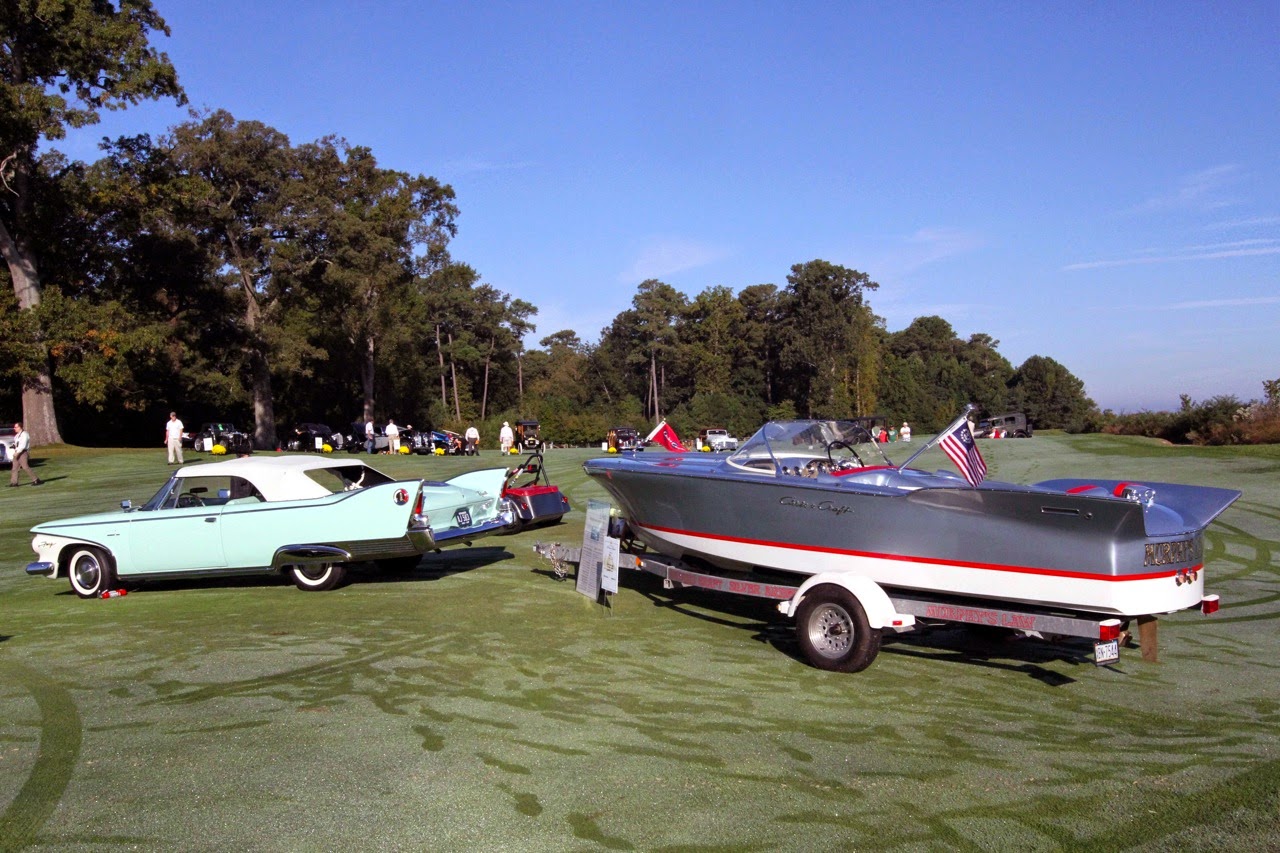 Does anything portray 1950s-era styling any better than the pairing of Barbara & Rob VanDewoestine’s ‘60 Plymouth Fury convertible with Mindy Hickman’s 19-foot ‘59 Chris-Craft Silver Arrow “Murphy’s Law”? Both featured tailfins, two-tone paint and chrome trim to convey a sense of exuberance.