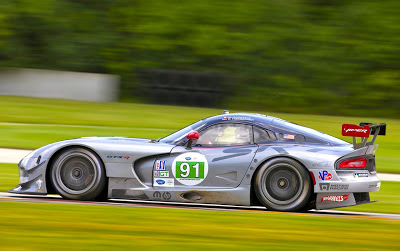 It was the 17th factory-backed victory for SRT Viper in ALMS competition (16 victories from 1999-2000). The last victory came December 31, 2000 in Adelaide, Australia. The Vipers posted a 1-2 finish led by Karl Wendlinger/Dominique Dupy followed by Jean-Philippe Belbc
and Ni Amorium. That was then; this is now!

“Winning at Road America is not only a victory for Team SRT, it’s also a win for the entire SRT Brand and the Viper,” said Ralph Gilles, President and Chief Executive Officer – (SRT) Street
and Racing Technology Brand and Motorsports, Chrysler Group LLC. “We are very proud of
the performance delivered by our drivers and the crew. I am truly humbled by the
hard work and dedication given by Team SRT this entire season. Thank you for all the
support of our extended Chrysler Family.” 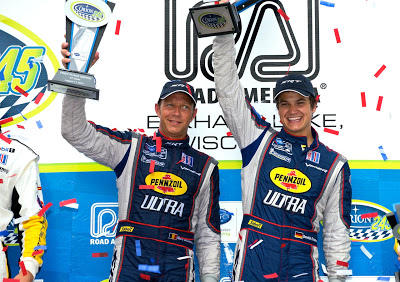 Goossens drove the #91 Viper past Antonio Garcia’s Corvette with 33 minutes remaining in the 2:45 event and was never challenged. However, there was plenty of nail biting in the SRT Motorsports pit over the final eight minutes of the race. Fuel was an issue. The #91 along with the rest of the top five in the running order were low on fuel and would have to make a final pit stop for a splash under green-flag conditions. Just as the #91 was ready to make that stop, the caution appeared. That’s all Goossens needed as he had just enough fuel to complete two more circuits around the 4.048-mile circuit at reduced speed for the win.

“I’d like to say a very big thank you to Ralph Gilles, Beth Paretta, Gary Johnson, Matt Bejnarowicz and of course Bill Riley for building such a great car,” said Goossens. “It’s not only the history of being the first factory-backed victory for Viper since 2000, but we’re only one year old with this program. This is the first track that we’ve gone to for the second time. It was a great race, a great weekend.” 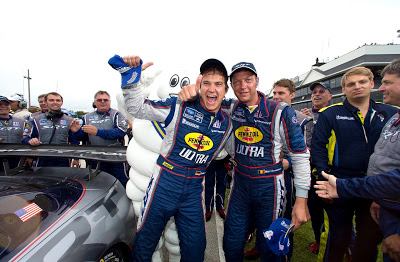 The race weekend belonged to SRT Motorsports and the two SRT Viper GTS-Rs from Riley Technologies. The #93 Pennzoil Ultra SRT Viper GTS-R claimed the pole while the #91 was
fifth on the starting grid. Both cars led laps throughout the race including a couple
of stints running 1-2 in the order.