Much more than a ‘Porsche Museum’, the Matunes take us on an historical trip through generations of racing orchestrated by a legendary name in Porsche sales and racing. It’s all about SPEED THRILLS: BRUMOS COLLECTION. 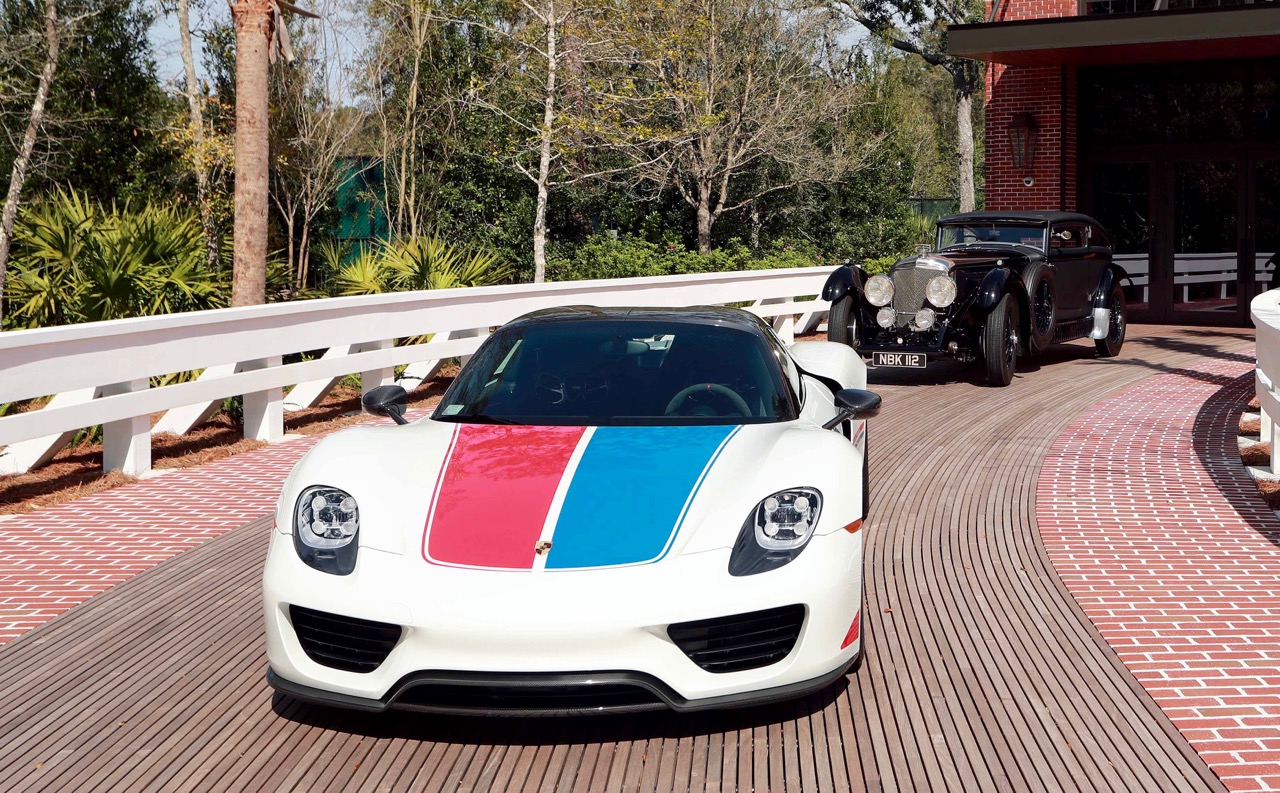 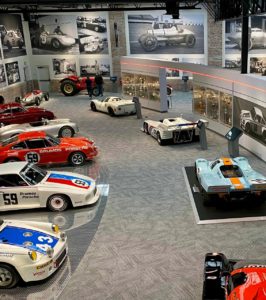 Open less than three months; the Brumos Collection in Jacksonville, FL is already making noise on the automotive front as a destination worthy of any enthusiast’s bucket list. Before you even enter the museum, you are overwhelmed by the sight of a Porsche 918 and replica Bentley “Blue Train” Special sitting nose to tail in front of the entry door.

The Frontrunners, showcases the long association between Porsche and Brumos. Along the way, you relive racing history through all forms of sports car racing from brutish Can-Am sprints to major international endurance contests.

Housed in a bespoke 35,000 square foot building replete with industrial touches, it hearkens back to the days when Henry Ford assembled Model Ts in Jacksonville. 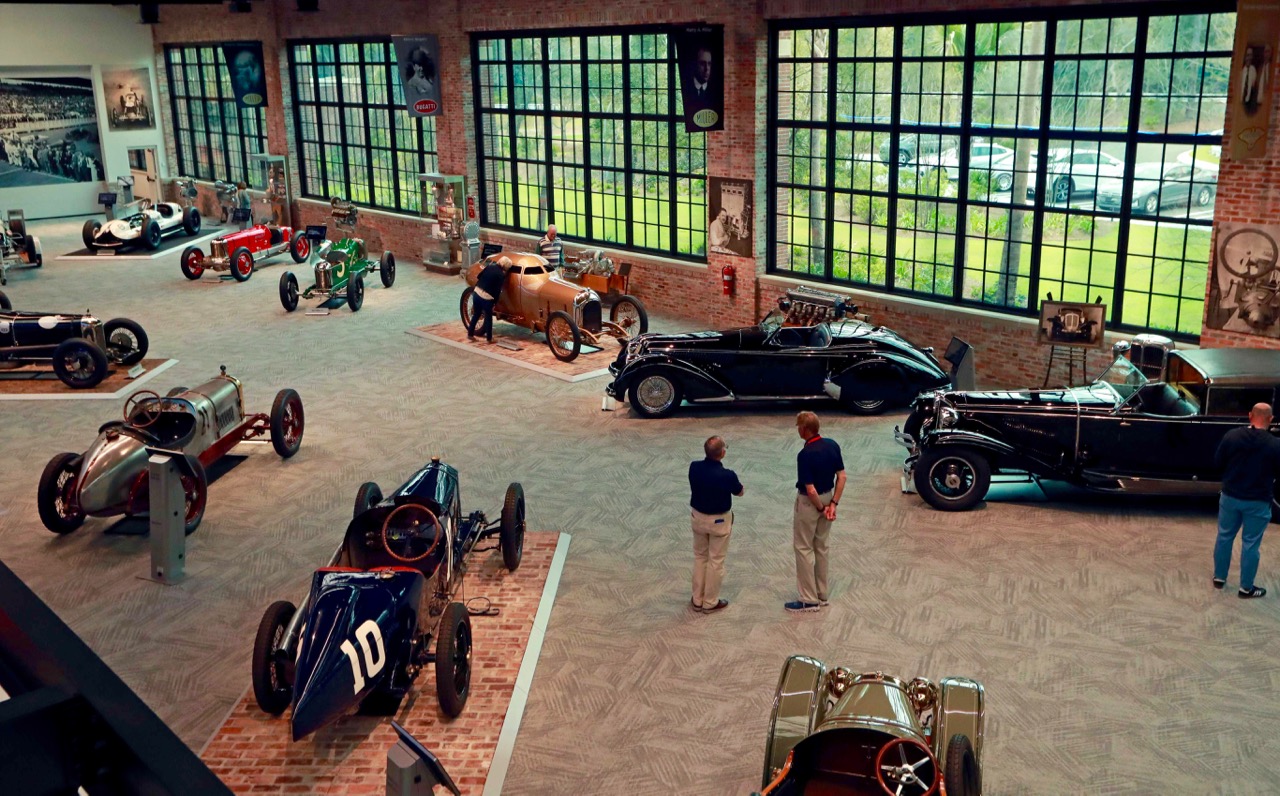 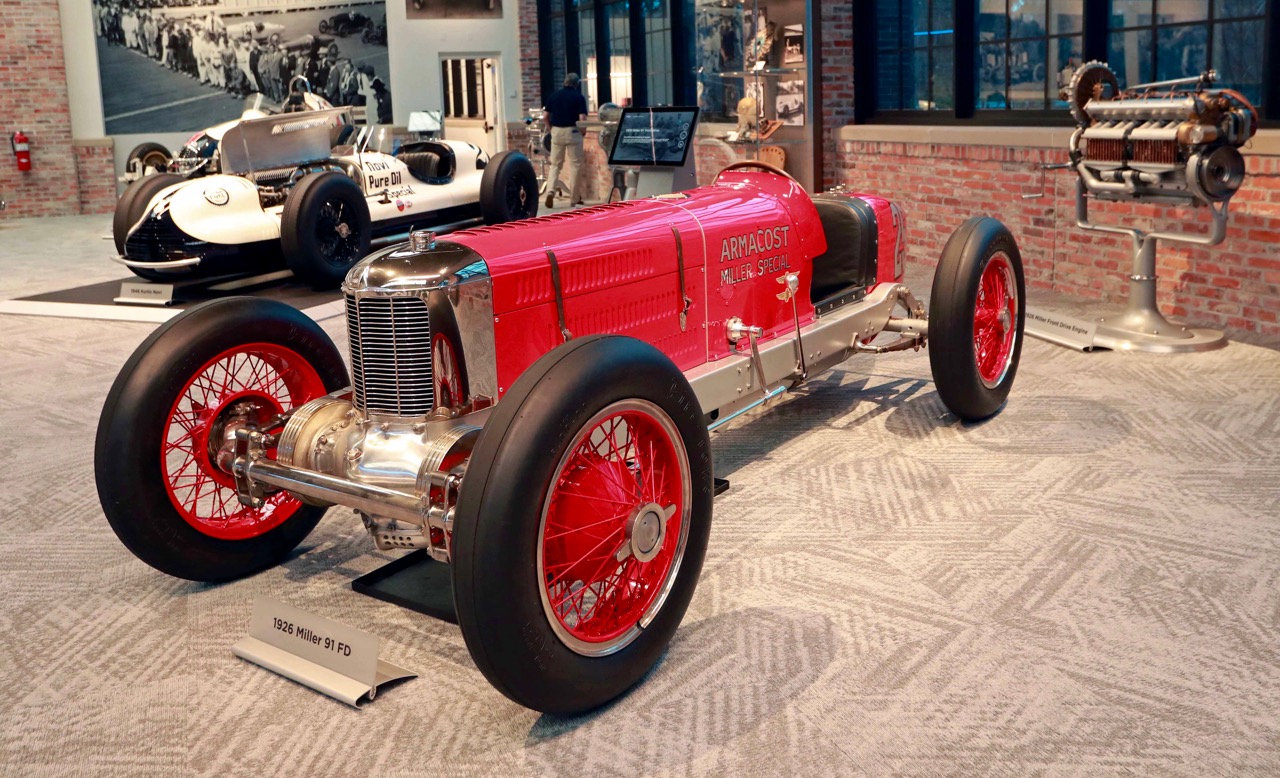 Each car in the collection is accompanied by a digital kiosk, giving detailed information on the car and displaying in-period photos. Arranged among the cars are displays on related automotive subjects and examples of engines that powered some of the cars on display. The walls are covered in historic photos with banners paying tribute to a variety of automotive and racing pioneers. Here a ‘26 Miller FWD and a ‘46 Kurtis Novi await close examination. 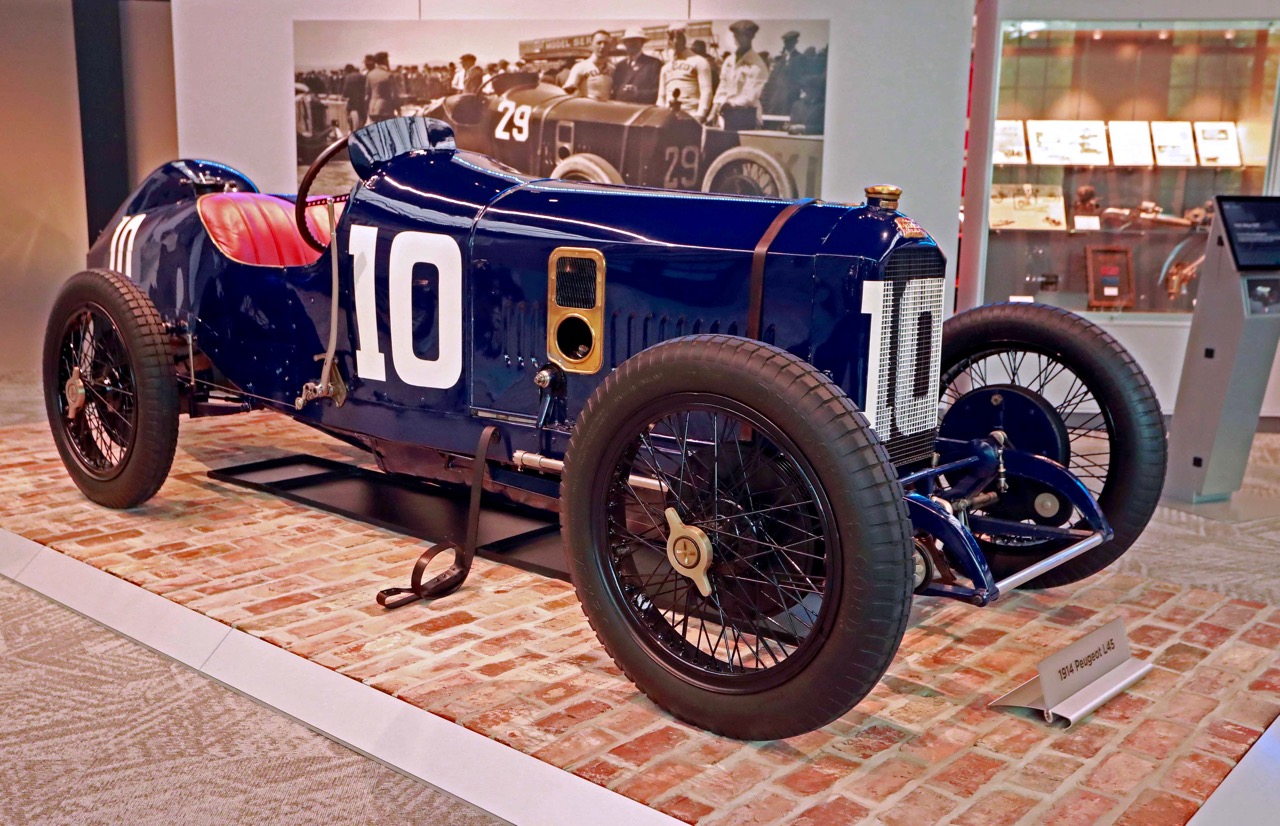 Cars exhibited are significant examples of the automotive genre and veterans of flawless restorations as exemplified by this ‘14 Peugeot L45. Today it is one of two known to still exist worldwide. It first came to America in 1915 and took part in a number of races. However, its biggest impact on racing may have been its four-valve, DOHC engine architecture that would eventually find its way onto a number of American race engines. The whole story is fully laid out in the display. 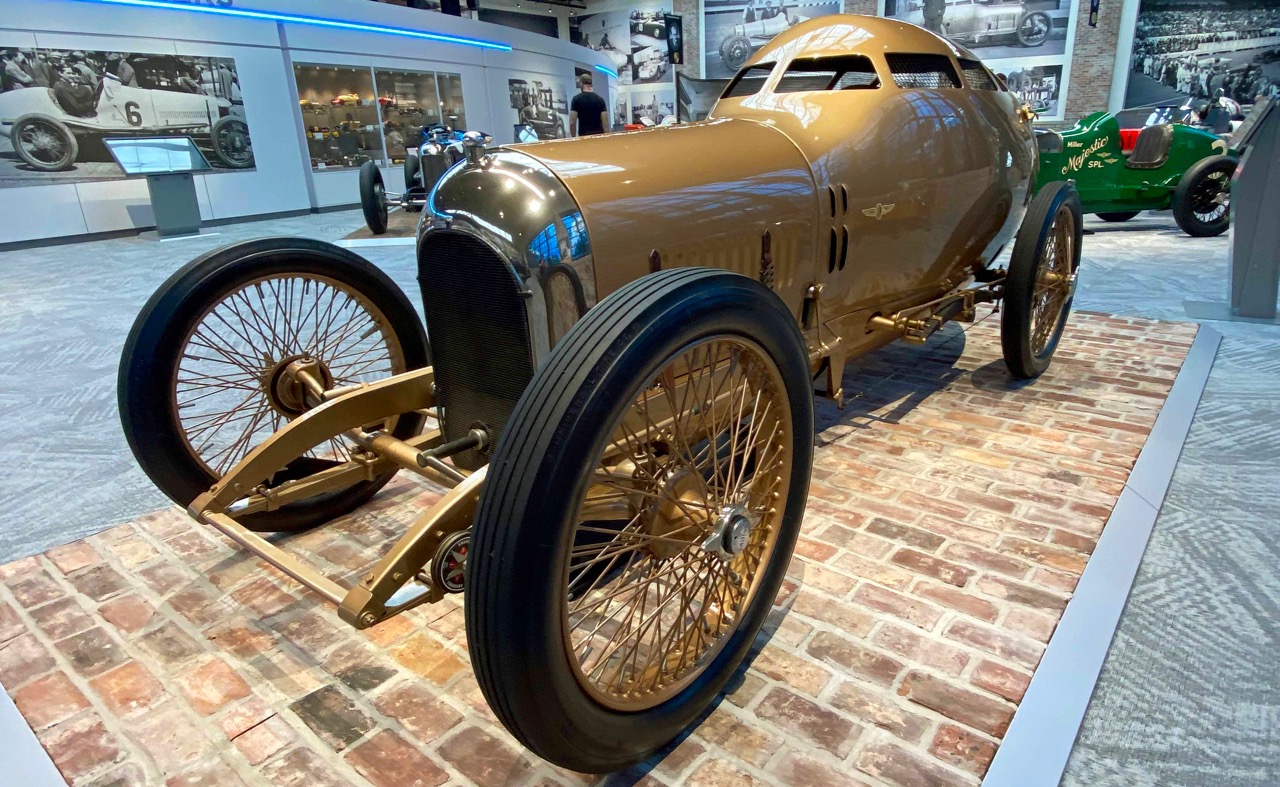 The ‘17 Miller “Golden Submarine” was viewed with disbelief when legendary showman and racer Barney Oldfield released it to the world. Henry Miller’s first racecar, it featured technology Miller found when he repaired Bob Burman’s wrecked Peugeot L24. Oldfield used the car in about 35 races, winning 17 of them. He also used the car to set numerous international dirt track speed records. The original car was destroyed, but Buck Boudeman built this reproduction so its story would not be lost to racing history. 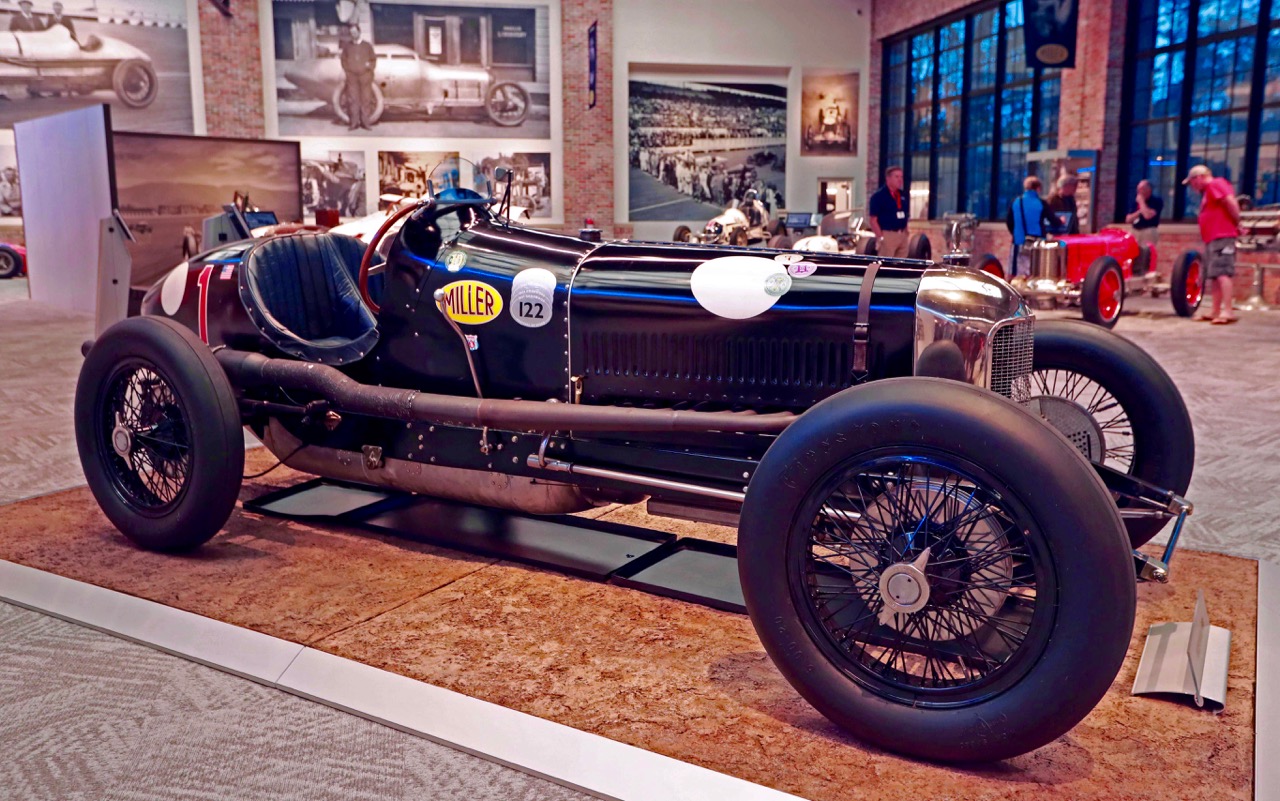 A Miller was the car to have in American racing in the 1920s. European drivers who came to compete in the Indy 500 saw that and brought cars back to Europe to contest races there. Upon receiving his, Count Louis Zborowski set out to race the car at Brooklands where he achieved some success in club events. Later he would contest the 1923 and 1925 Grand Prix seasons with less success, a second place in Spain being his highest placing. 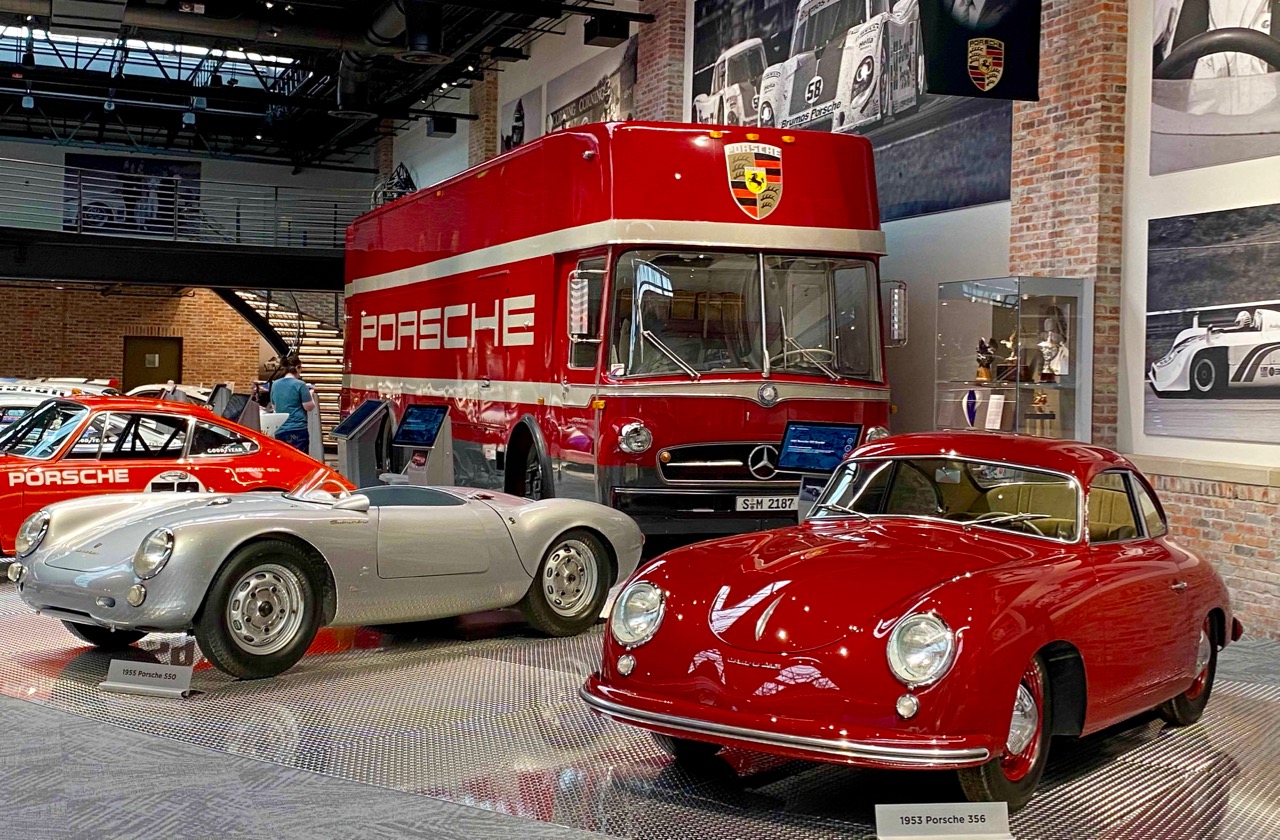 The Collection covers Porsche lineage from 1953 (356) to 2019 (Porsche works 911 RSR). Here that 356 sits next to a ‘55 550 Spyder in the shadow of a massive ‘68 Mercedes-Benz Porsche factory team transporter. Porsche had two of these built on Mercedes-Benz bus chassis. From 1968 to 1989, these would haul Porsche racecars to racing venues throughout Europe. 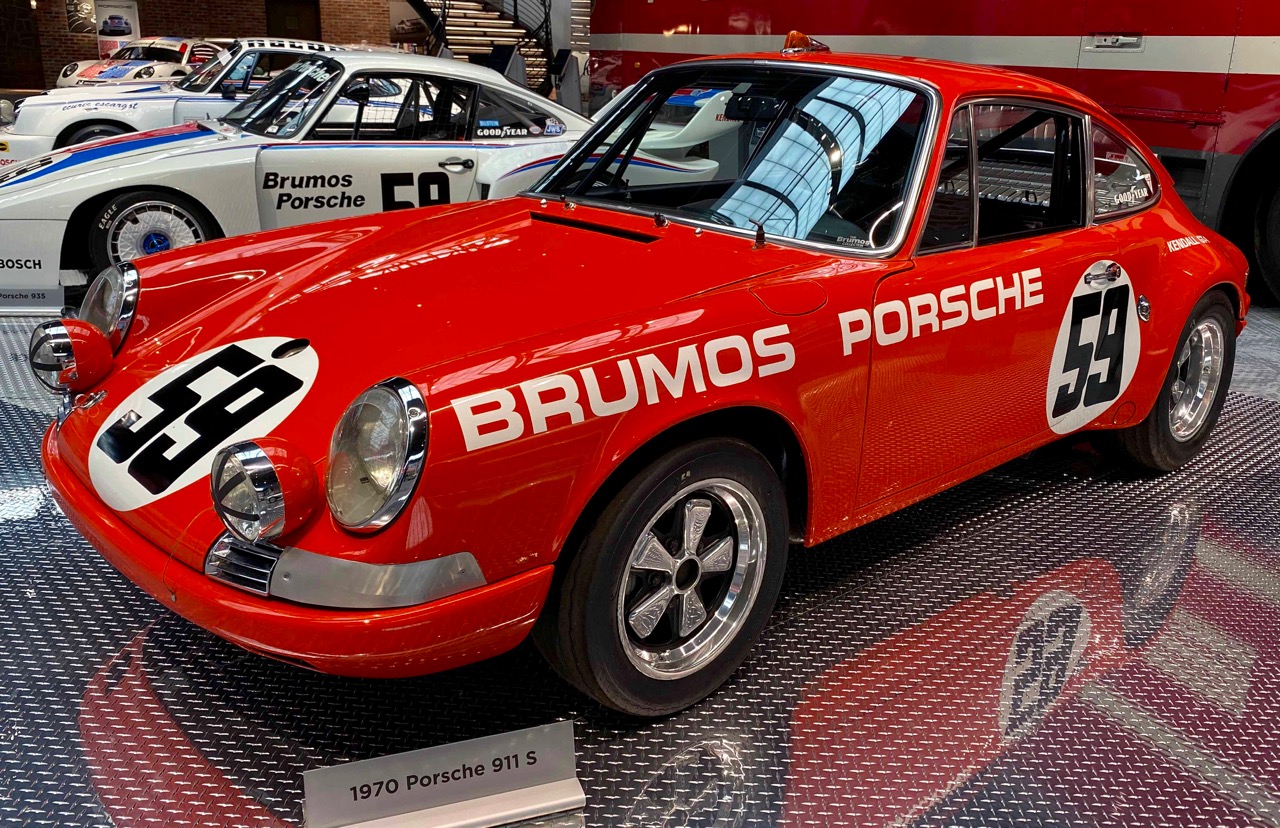 Hurley Haywood resumed his long, successful association with Brumos in 1972 with this ‘70 911S following his discharge from the Army. By year-end, Brumos would be an IMSA GT champion. This was the last Brumos racecar to sport tangerine paint before the team switched to white and later, the blue and red Brumos racing “sweeps”. The use of number 59 began with Peter Gregg in 1967 who used it to recall his time aboard the carrier USS Forrestal which was hull number 59. The font used on the carrier is repeated on the racecar! 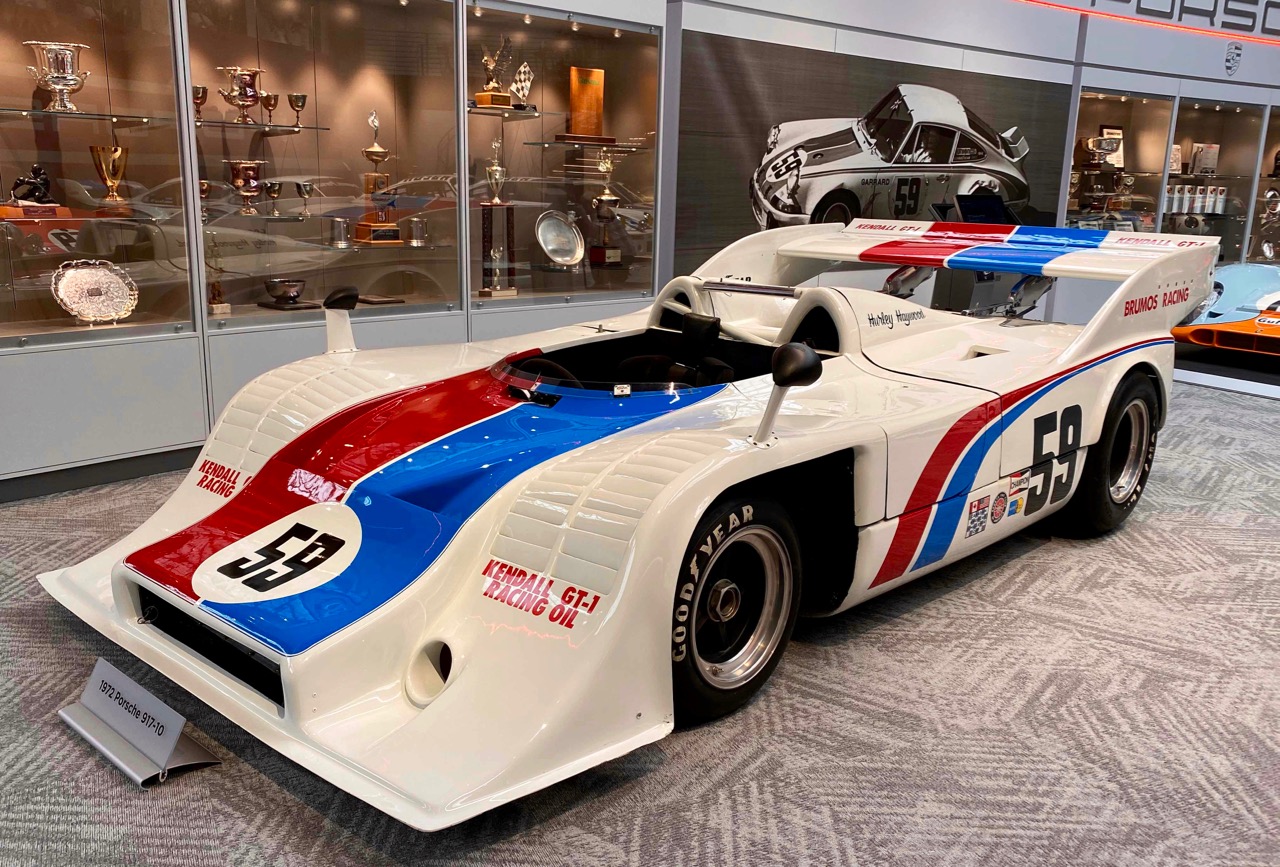 Brumos’ 917/10 came from Porsche in 1972 naturally aspirated and was later converted to a turbocharged version. Peter Gregg would finish ninth in the Can-Am that year before selling the car to Hurley Haywood. A year later, Haywood would finish third behind the two Penske 917/30s. Also of note, is that this car was the first use of the red and blue Brumos “sweeps” in the livery. 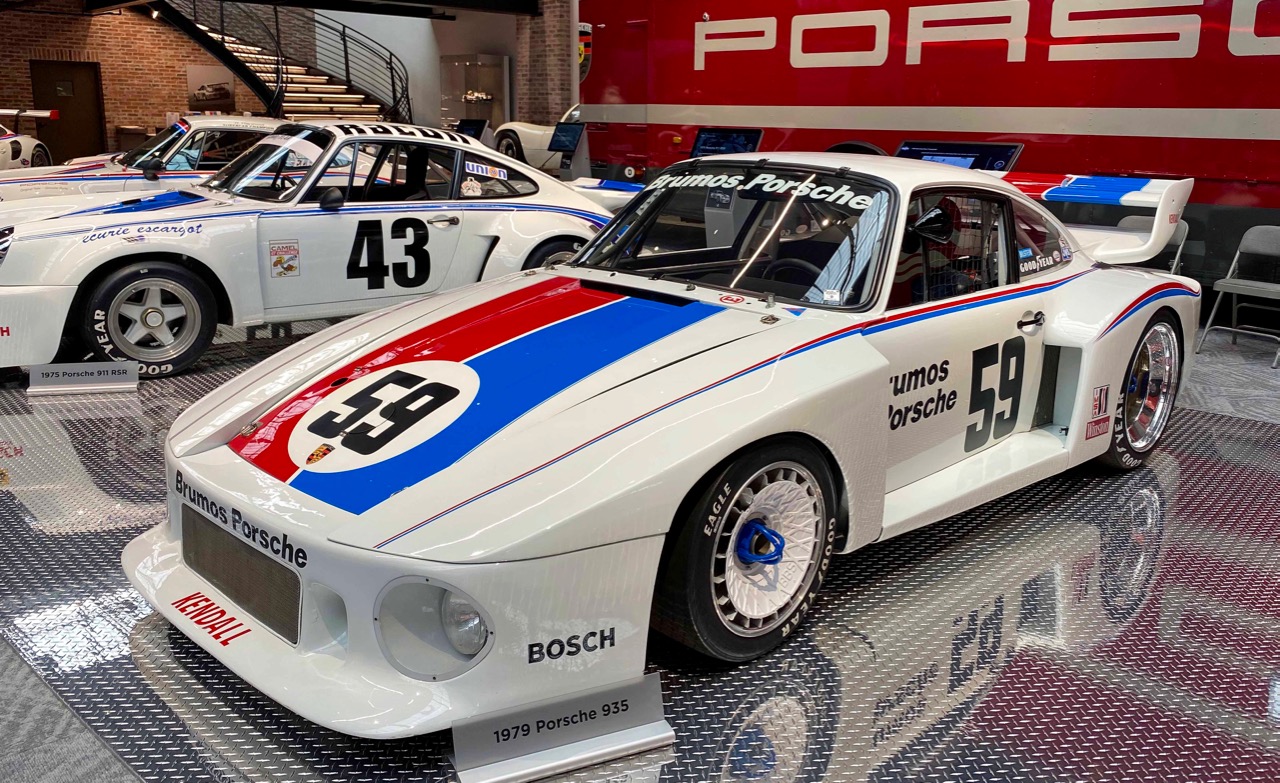 The 935 was once described by famed Porsche engineer Norbert Singer as: “ … a basic 911 with a modified front end and a new rear wing, powered by a 2.8 liter turbocharged engine producing 590 horsepower.” But in reality, it is so much more. In the hands of Peter Gregg, this car had a nearly perfect season, never finishing out of the top ten with eight victories to give Gregg and Brumos the 1979 IMSA Camel GT championship. This 935 was Gregg’s last racecar. 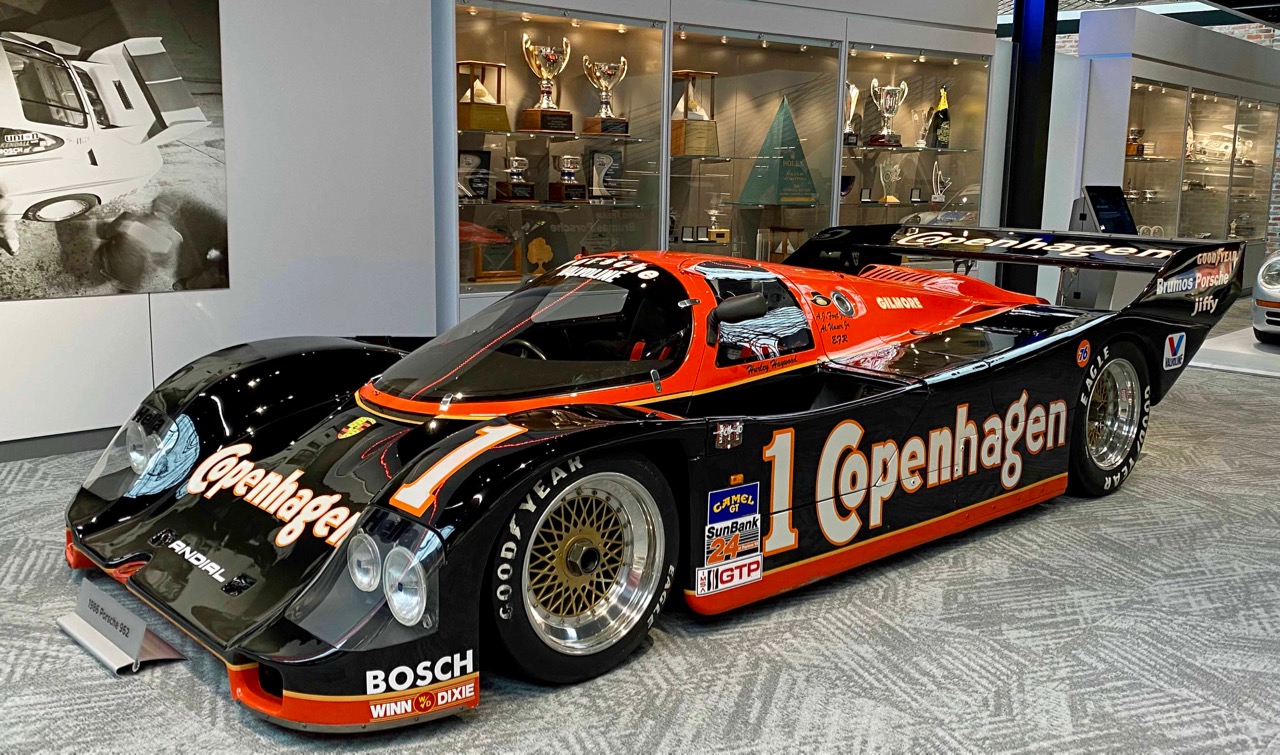 In 1987 AJ Foyt turned his attention to endurance racing and bought this ‘86 Porsche 962. It was built by Al Holbert and maintained by Brumos. Teamed with a host of high-profile co-drivers, Hurley Haywood among them, they would take on such Florida racetracks as Miami, Palm Beach, Daytona and Sebring. In eight starts, their best results were three fourth place finishes. 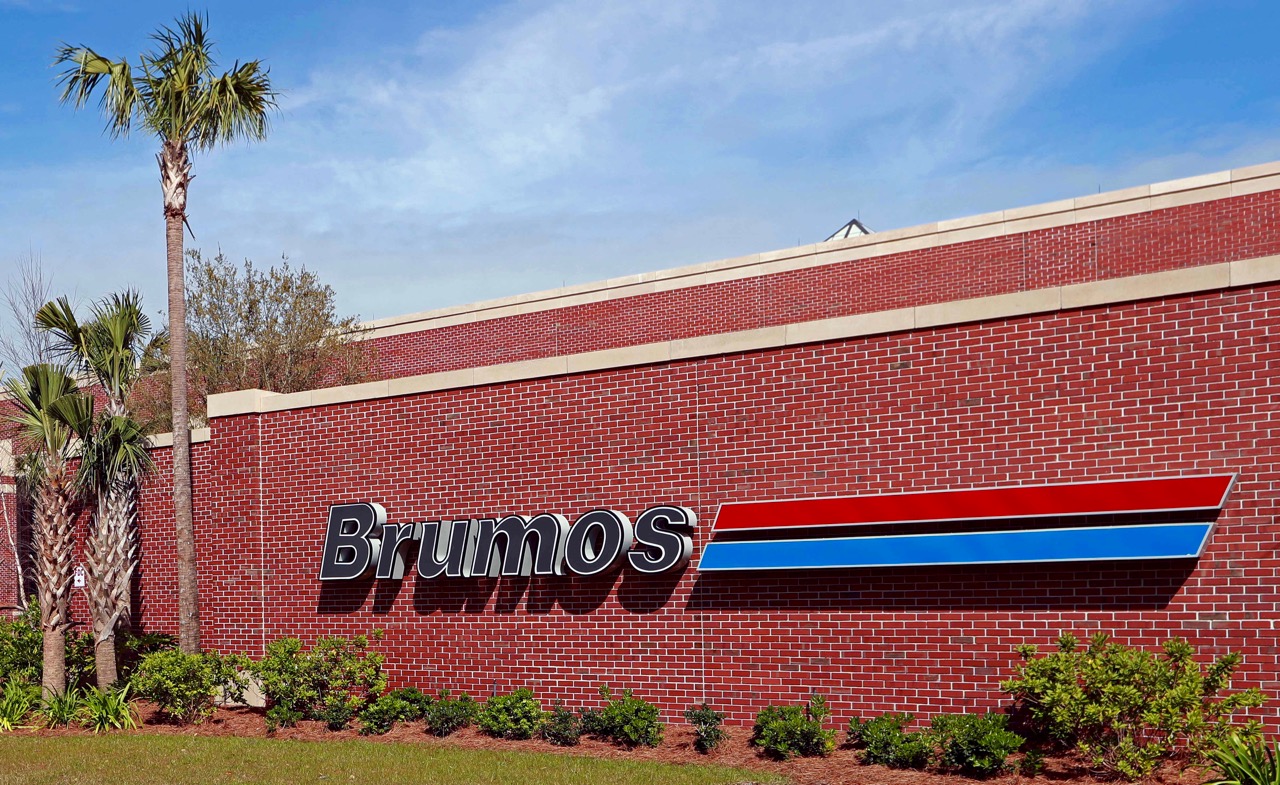 The SPEED THRILLS: BRUMOS COLLECTION Museum is located near Butler Boulevard, Florida State Route 202 about a half hour Southeast of the Jacksonville International Airport and a little over two hours North of the Orlando International Airport. At present the Museum is open Thursdays, Fridays, and the first Saturday of each month with a $19.99 admission fee (some discounts available).

Thanks to those who made our trip to The Brumos Collection possible, including Brandon Starks, Executive Director, Toni Bordreaux-Godwin, Director of Operations, and Jeff Perlman of the Dalton Agency.

It is suggested that you call 904-373-0375 before planning a trip, to double-check on whether The Collection is open considering the COVID-19 health crisis.