Thousands of people attended the 22nd annual hot rod, custom and specialty car show in Carpinteria, CA, including our intrepid photojournalist, Jim Palam, who managed to smell the roses while capturing the essence of the car culture. 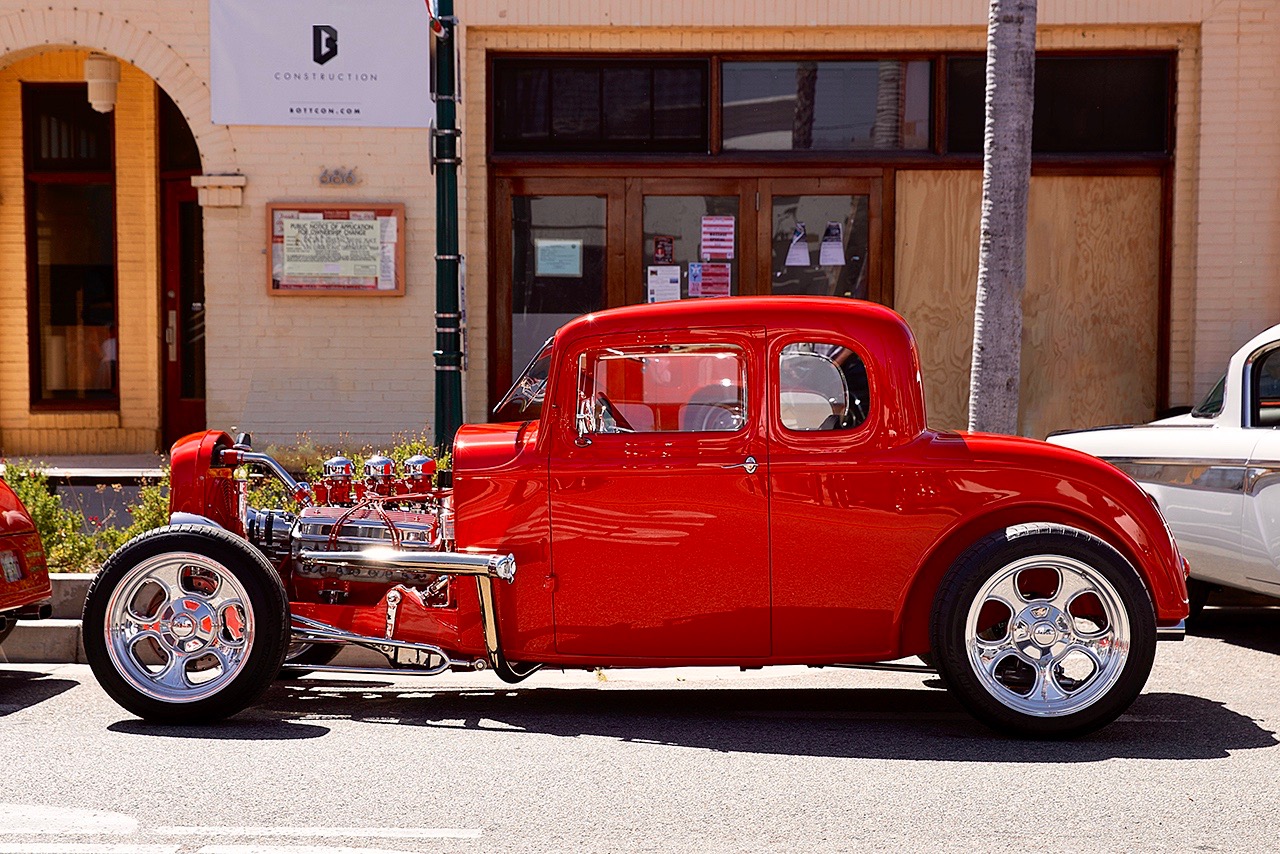 Summer is the time that car shows are in full-bloom all over America. Experienced Car Guys have an uncanny ability to sniff-out the best local shows by following the residual scent of high-octane fuel – left behind when pedals hit the metal. Ahh, but in seaside Carpinteria, CA there’s a bonus for the scent receptors – thanks to the fragrant feature of fresh cut roses at SHOWTIME: RODS AND ROSES 2019!

Now in its 22nd year, Rods and Roses draws thousands of visitors to Carpinteria where hundreds of customs, classics, hot rods and muscle cars line Linden Avenue, along with flower and food vendors, plus art and crafts exhibitors. Proceeds from this popular event support local non-profit groups such as Future Farmers of America, Carpinteria Cares for Youth, Hope Net, Carpinteria Education Foundation, The Food Pantry and Hospice Santa Barbara. So relax, breath deeply in and take a digital stroll with me – to the land of Pedals and Petals! 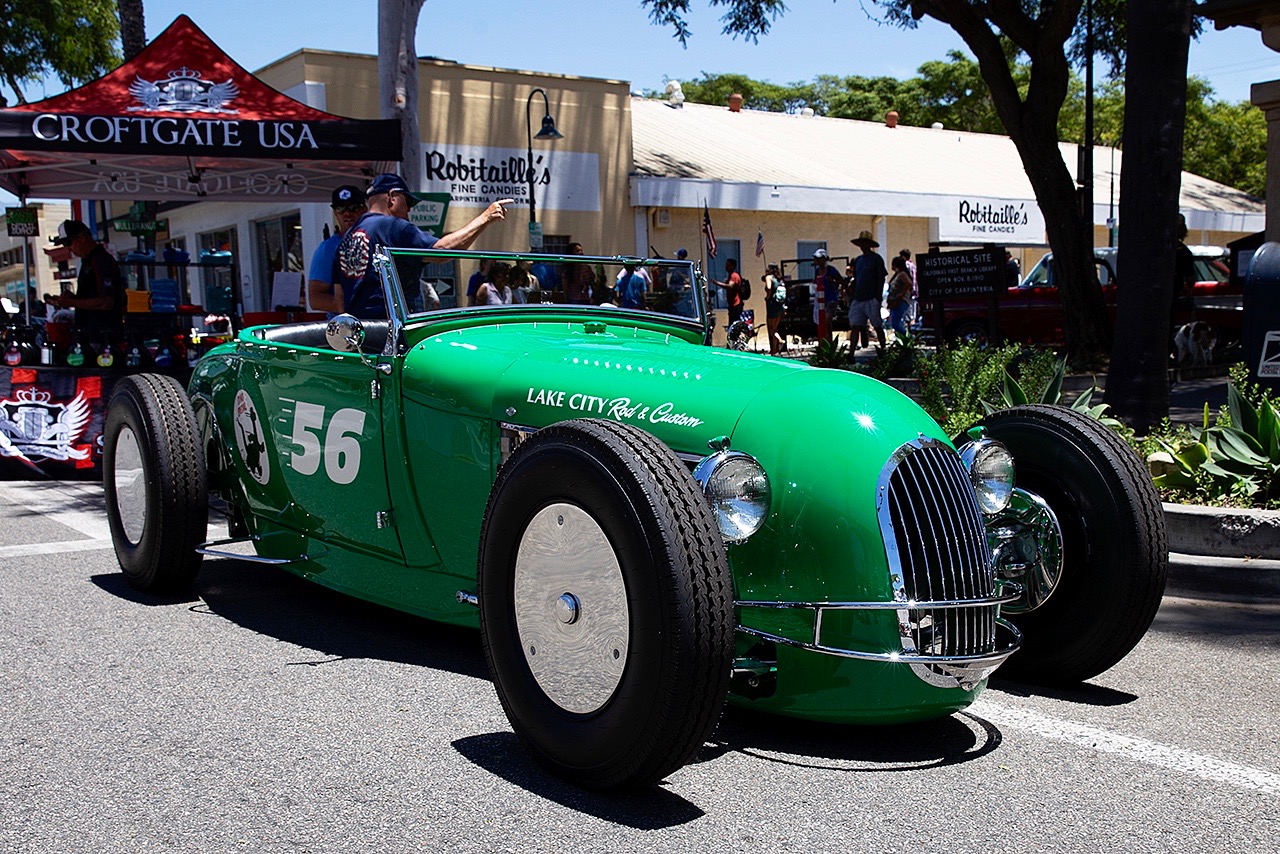 Hard work pays dividends. When Mark Lyons became the first employee at a local software startup, little did he realize that he would become Vice President of Procorp – the billion-dollar-value, cloud-based construction management software enterprise based in Carpinteria. Now he can acquire cars that he could only dream of – like the famous Gribble Brother’s Sinclair Green, ’29 Model A Indy and Lakes-style track roadster. 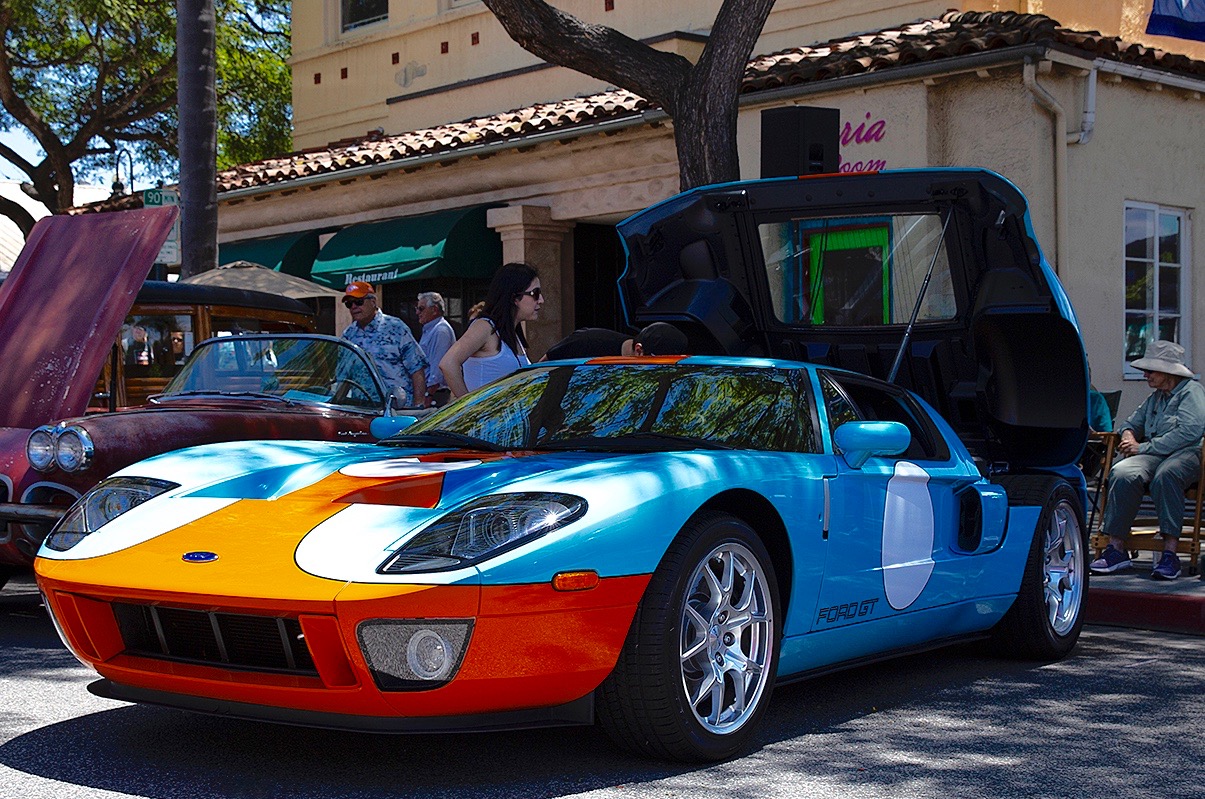 Ford GT owner Ed Wittwer must live nearby. There’s less that 1,000 miles on his Le Mans-inspired 2006 Heritage Livery GT. The Heritage package was available only in 2006 and just 343 were built. 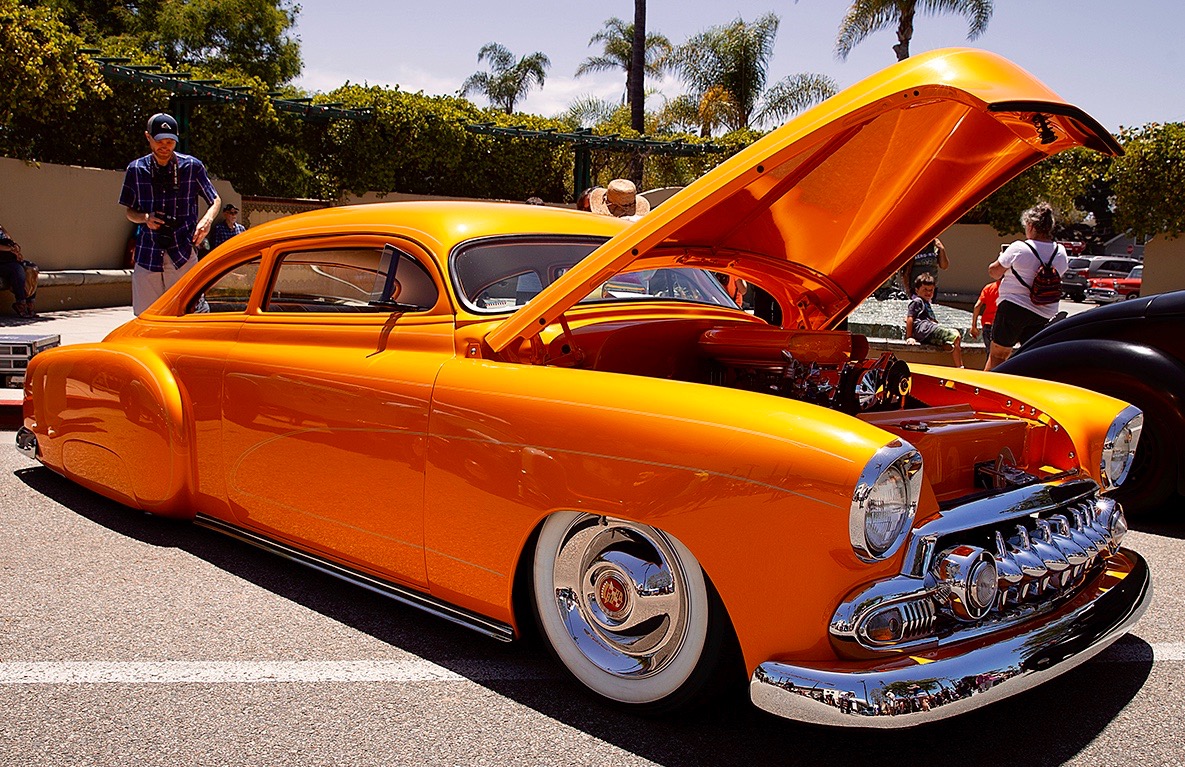 We welcome back Michael Hammer’s long and low ’51 Chevy lead sled to the Car Guy Chronicles. Michael is the Chairman and CEO of the Hammer International Foundation and the Armand Hammer Foundation. He also owns Hammer Galleries, and Hammer Productions, a television and film production company located in Los Angeles. Oh, he’s also a car guy who loves customs, classics and hot rods. 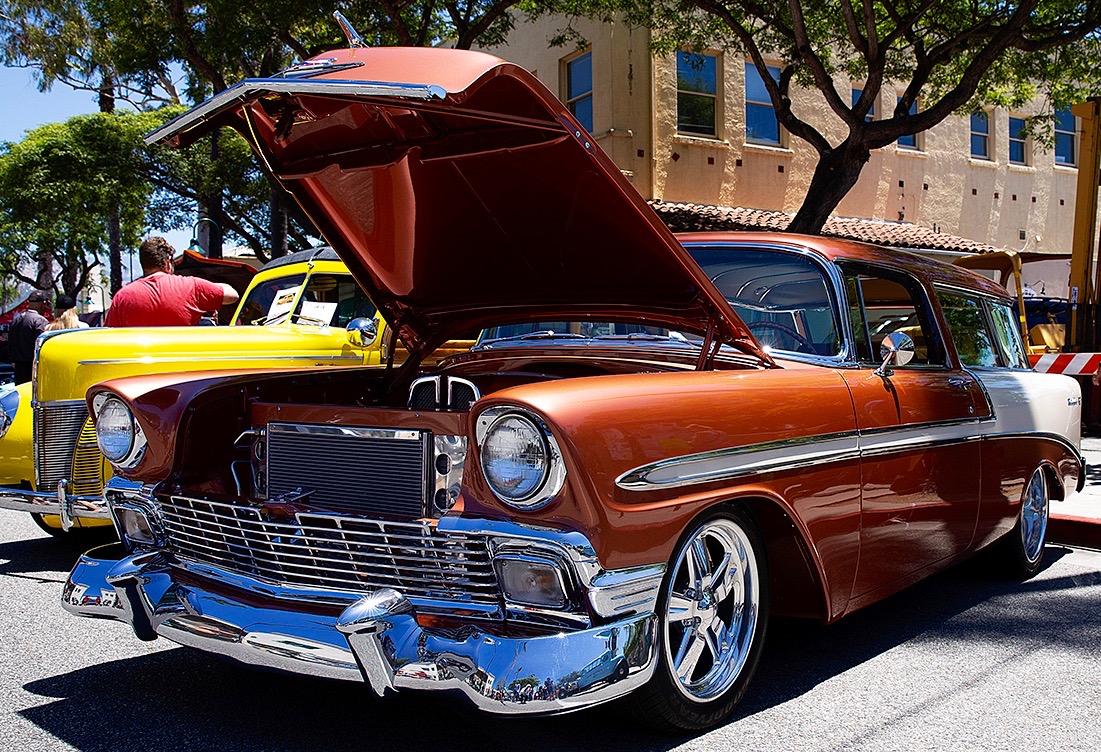 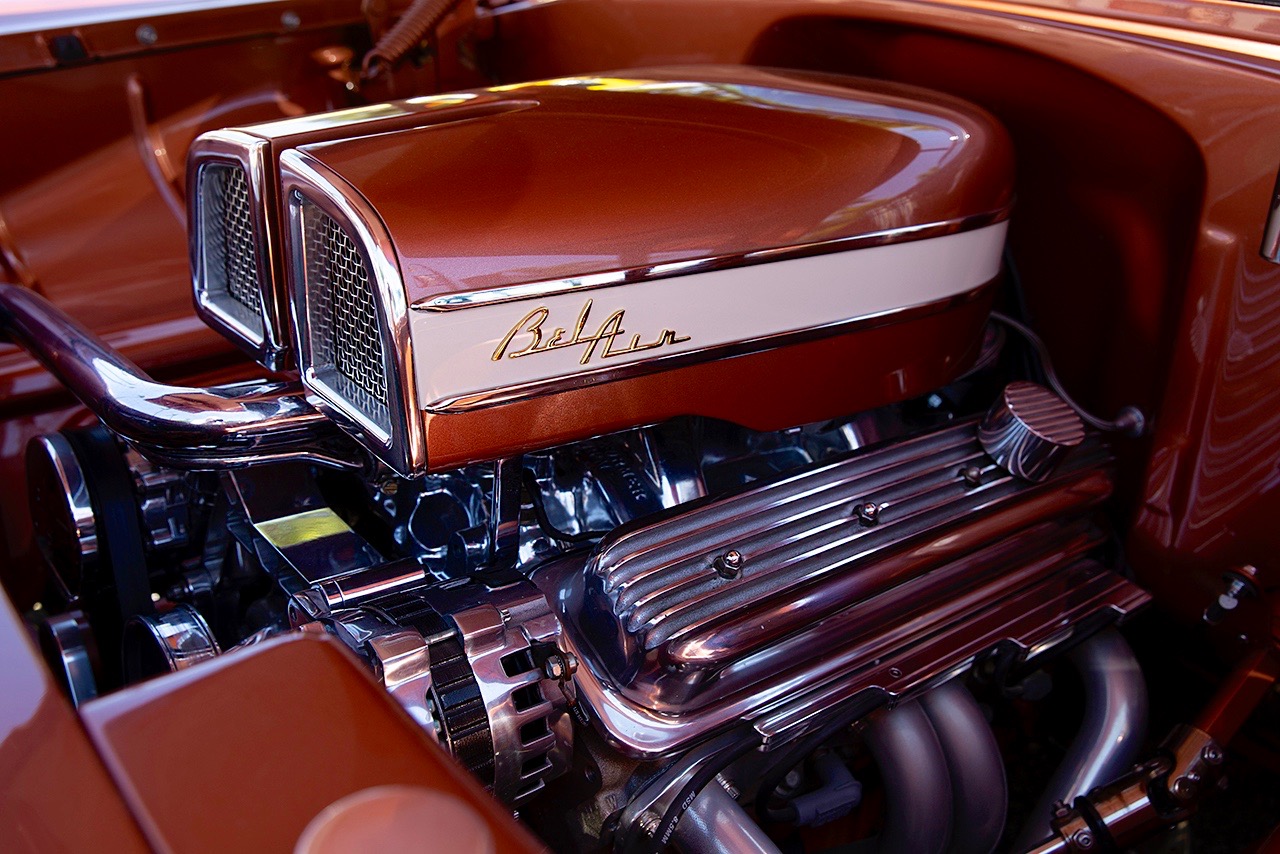 The Chevrolet Nomad concept was introduced at the GM Motorama in 1954. In 1955 Chevy began production on the two-door sport wagon as part of its Bel Air series. Production continued through 1957. This gorgeous ’56 Bel Air Nomad was a recent gift to the Petersen Automotive Museum. The Museum’s Nomad looks as good under the hood as it does on the exterior. This stock looking Nomad rides on a custom tubular chassis and is powered by a high-performance Chevy ZZ4 engine. 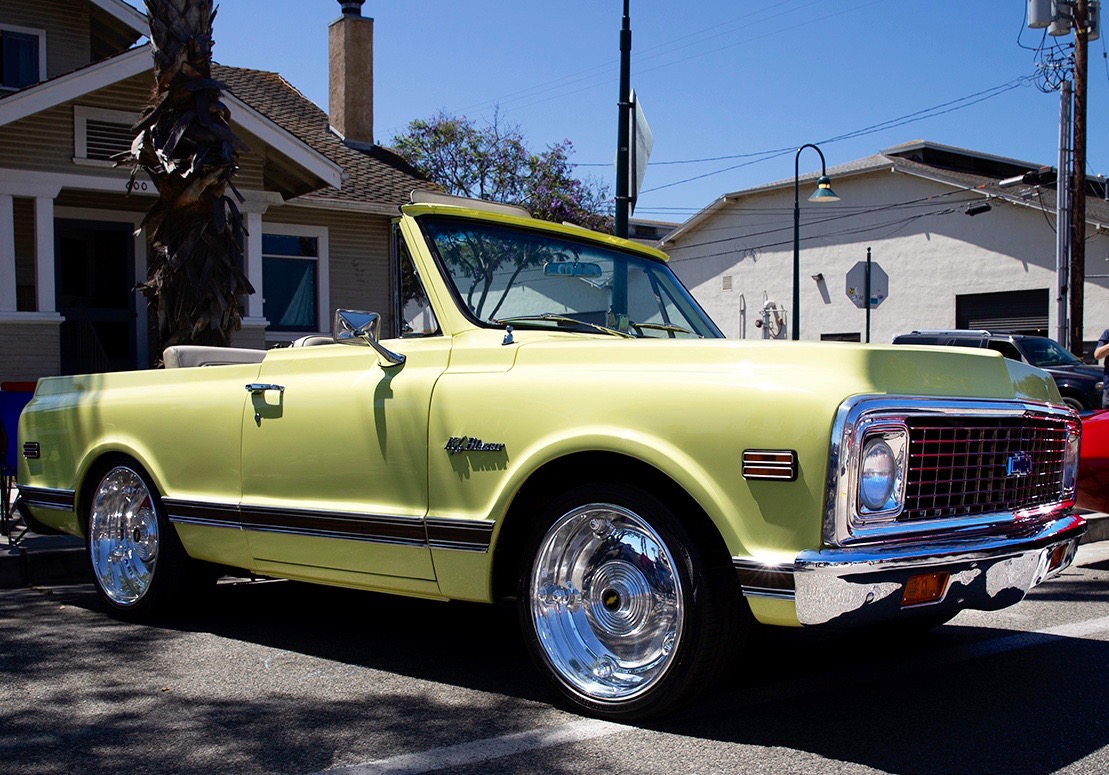 Chevy’s Blazer was the Bowtie Boy’s Bronco Buster. This short wheelbase truck was also tasked to scrap with the International Harvester Scout. Introduced in 1969 it quickly outpaced its competitors. This custom, slightly slammed RWD ‘72 K5 Chevy Blazer sits pretty, with its removable-top removed. 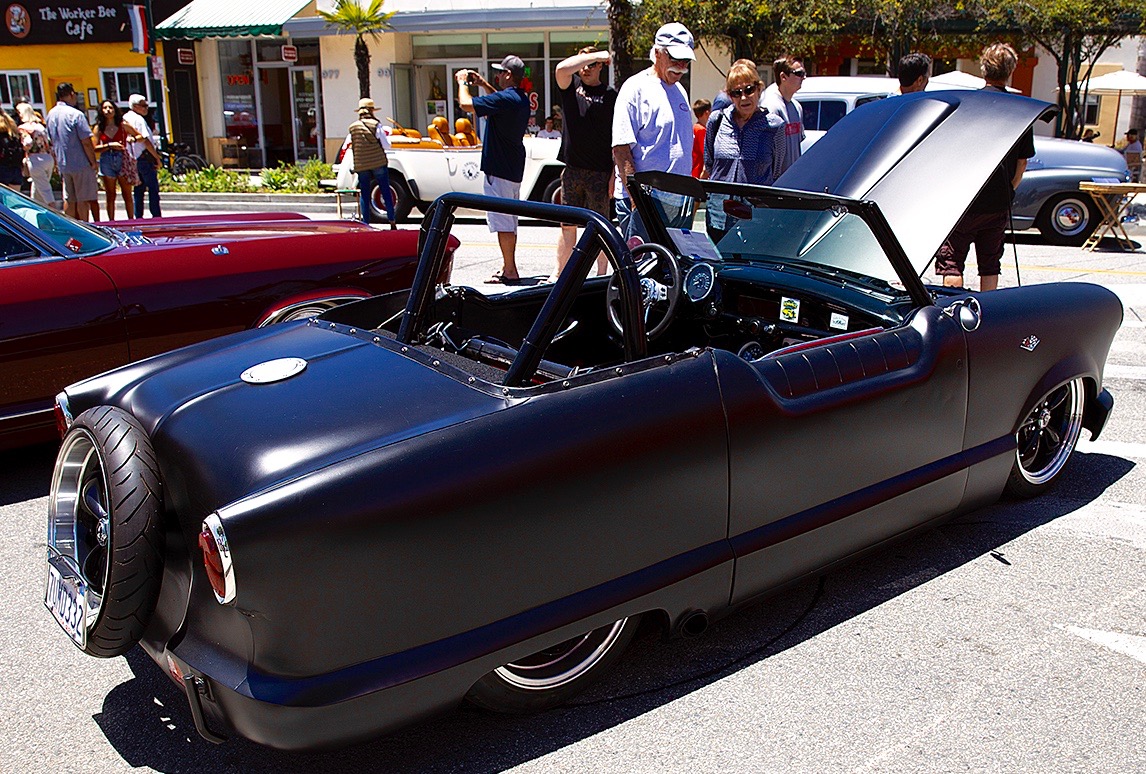 Affable Ron Lawrence is on a mission to bring joy to the car guy community. One technique he employs is to hit the car show circuit with his smile-inducer ’55 Nash Metropolitan. This mighty Metro is powered by an LS1 Corvette small-block married to a Tremec five-speed transmission. It’s super-quick, and floats comfortably along on an air-bag suspension. 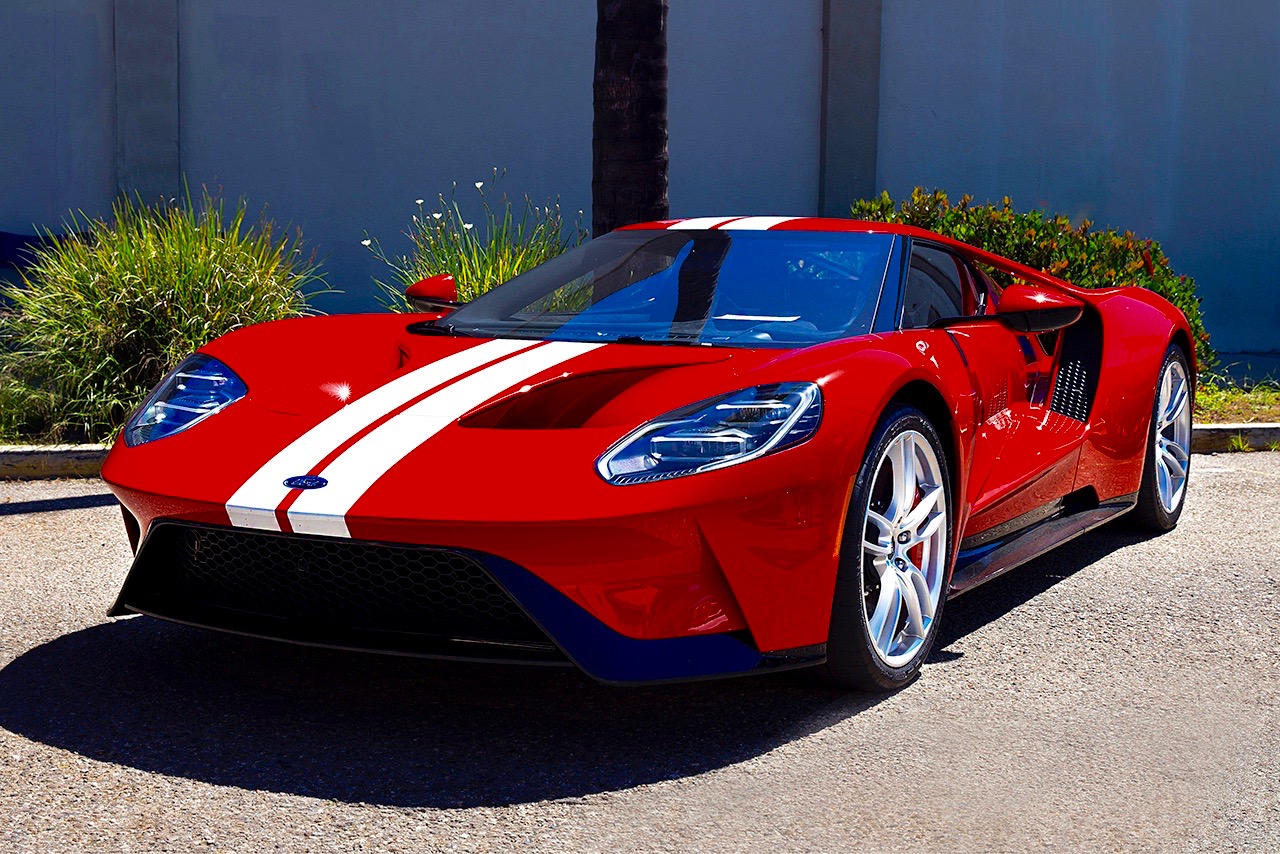 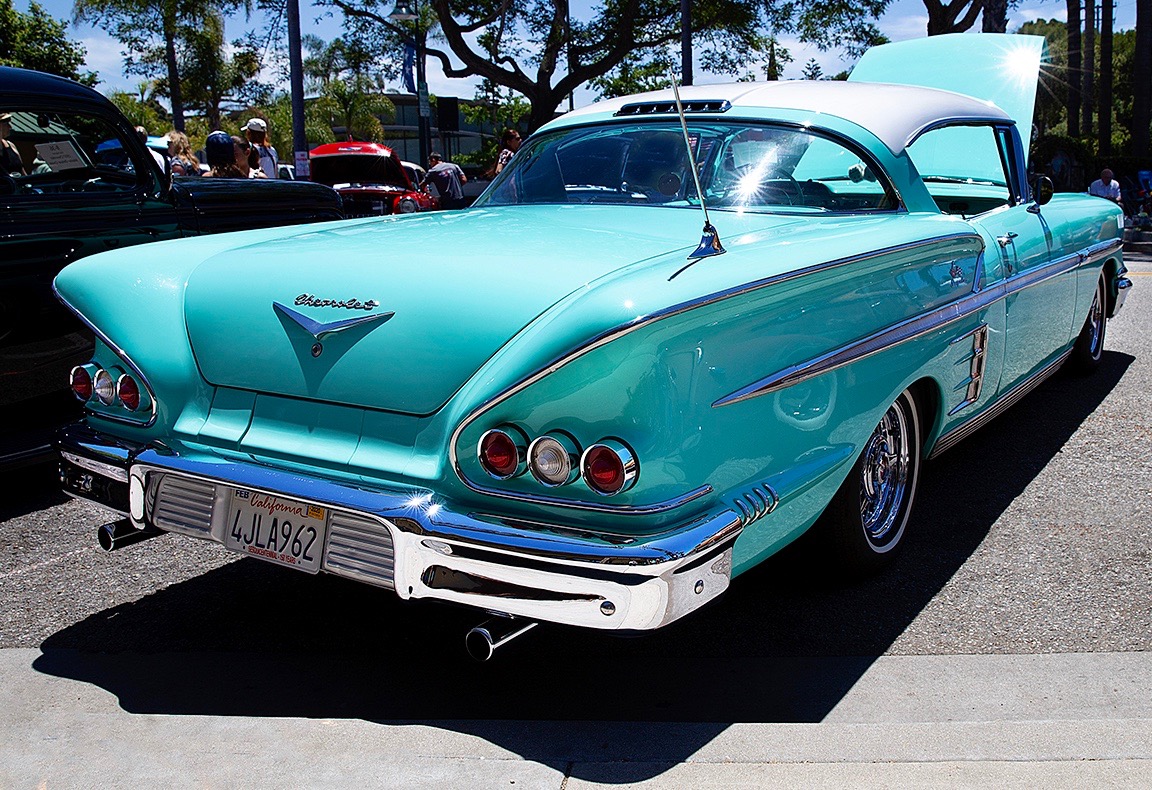 When we were young and developing our car guy aptitude, we’d often calculate Coolness by the array of taillights on a given model. The more lights, the cooler the car. So of course we loved the dual triple-sets on the iconic ’58 Chevy Impala hardtop. 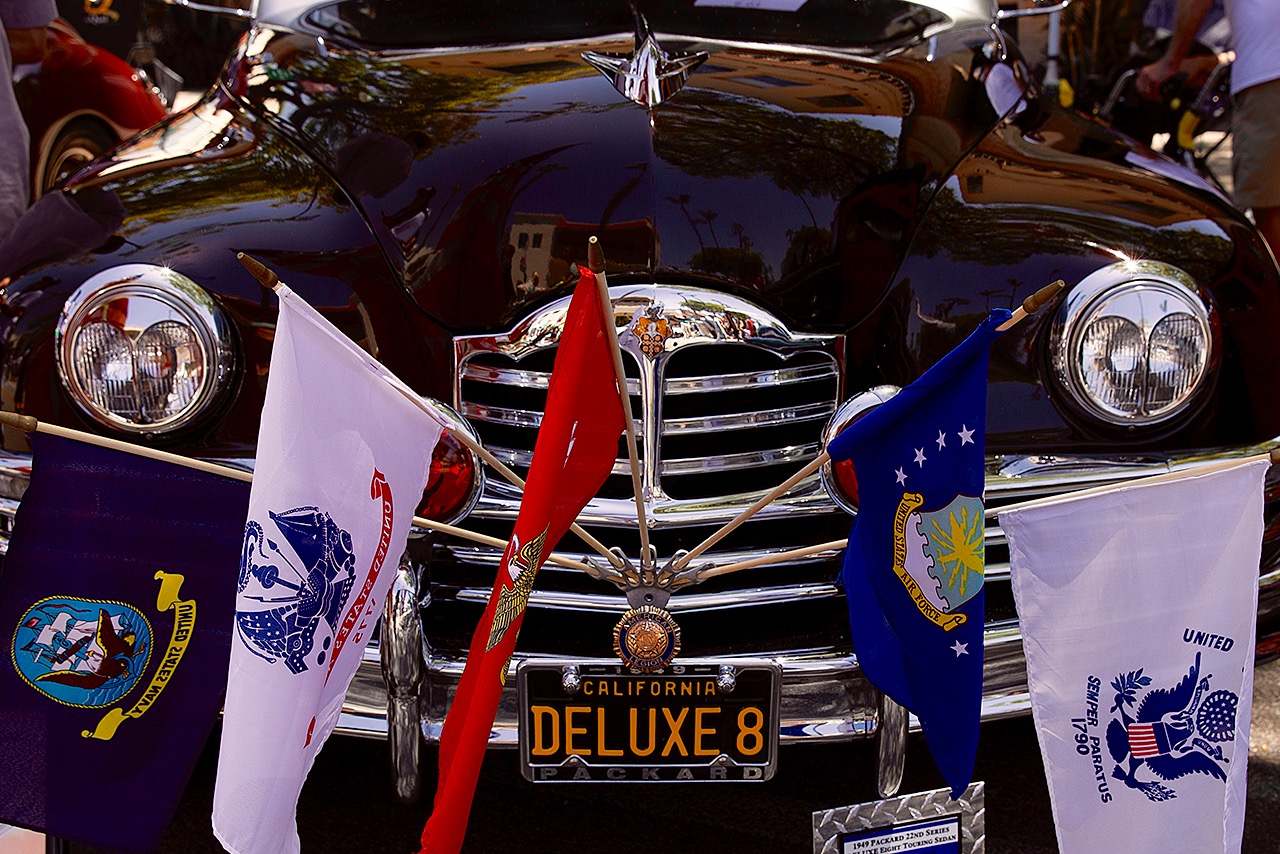 The ox-yoke grille on Ray Diaz’ spacious ‘48 Packard Deluxe 8 Touring Sedan is adorned with a radial display of military branch flags. Ray displays the flags year-round to honor all who served – including three generations of the Diaz family. Thanks for your service! 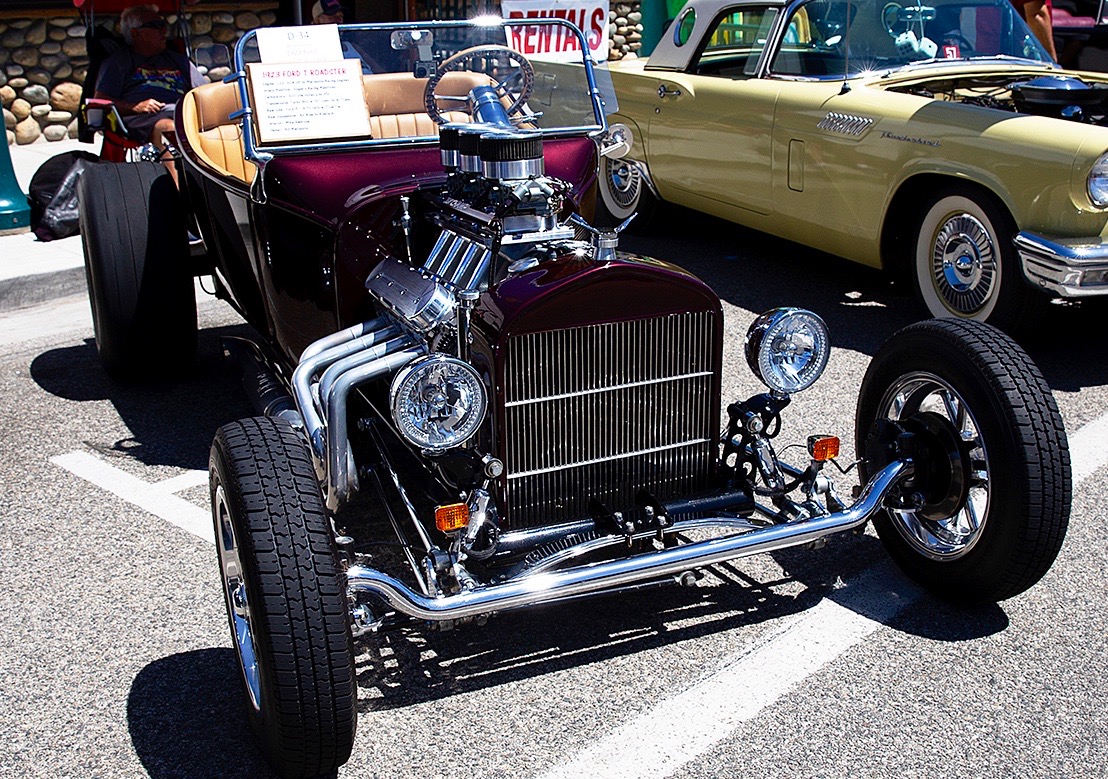 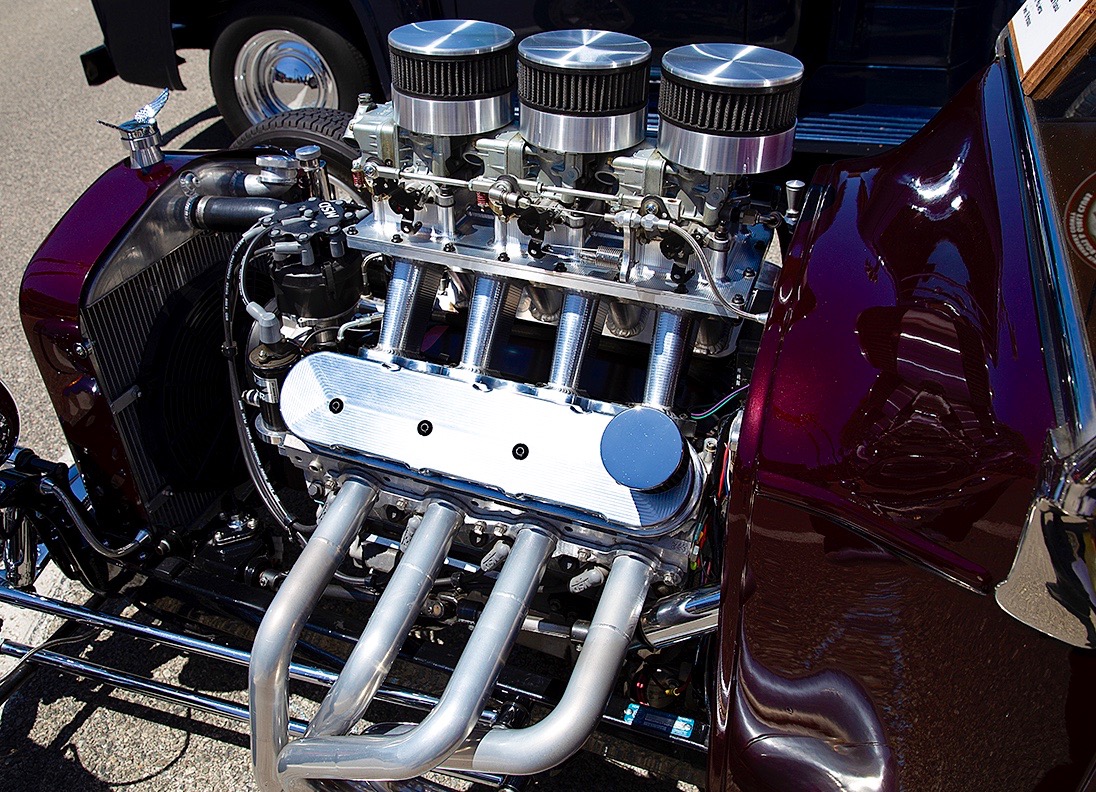 Even though I’ve ridden motorcycles and driven small sports cars since I was 18, I’ve always felt vulnerable riding in T-Buckets – and I tend to overlook them at car shows. But this one, Bill Maropulos’ precisely built ’23 Ford T roadster, caught my eye. It wasn’t the beautiful Deep Molten Red Pearl paint or the four-inch dropped front axle that drew me to it – it was the ‘Oh yeah!’ motor. The Maropulos ’23 T features one of Bill’s custom built motors – a superbly engineered 604 horsepower LS2 powerhouse. Crowned with three Holley 500 cfm carbs on a custom-machined Hogan’s Racing intake manifold, the LS2 also features ported heads and titanium valves under custom billet valve covers. If you want a Maropulos motor you’re going to have to stand in line behind his pro-racing and NASCAR clients. And if you want to get in touch with him, you might have a hard time flagging him down as he’s often out driving his comfortable, dependable and powerful T to points near and far. 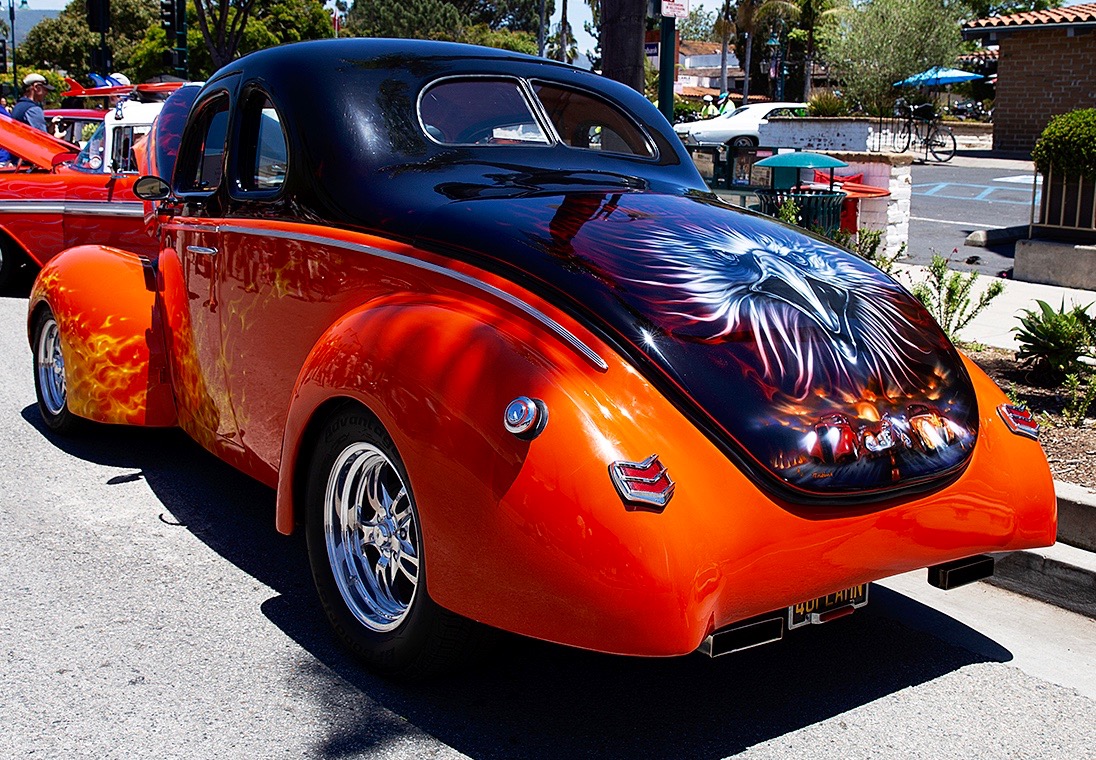 If you are one or know a Harley owner, you no doubt know that they are a loyal and passionate legion. Mike Crowder’s a Harley Guy and his ’40 Ford Resto-Rod is just one of the ways he displays his loyalty to the HD brand. It sports the orange and black Harley colors and a big, badass screaming eagle emblazoned across the Ford’s dramatically long rear end. 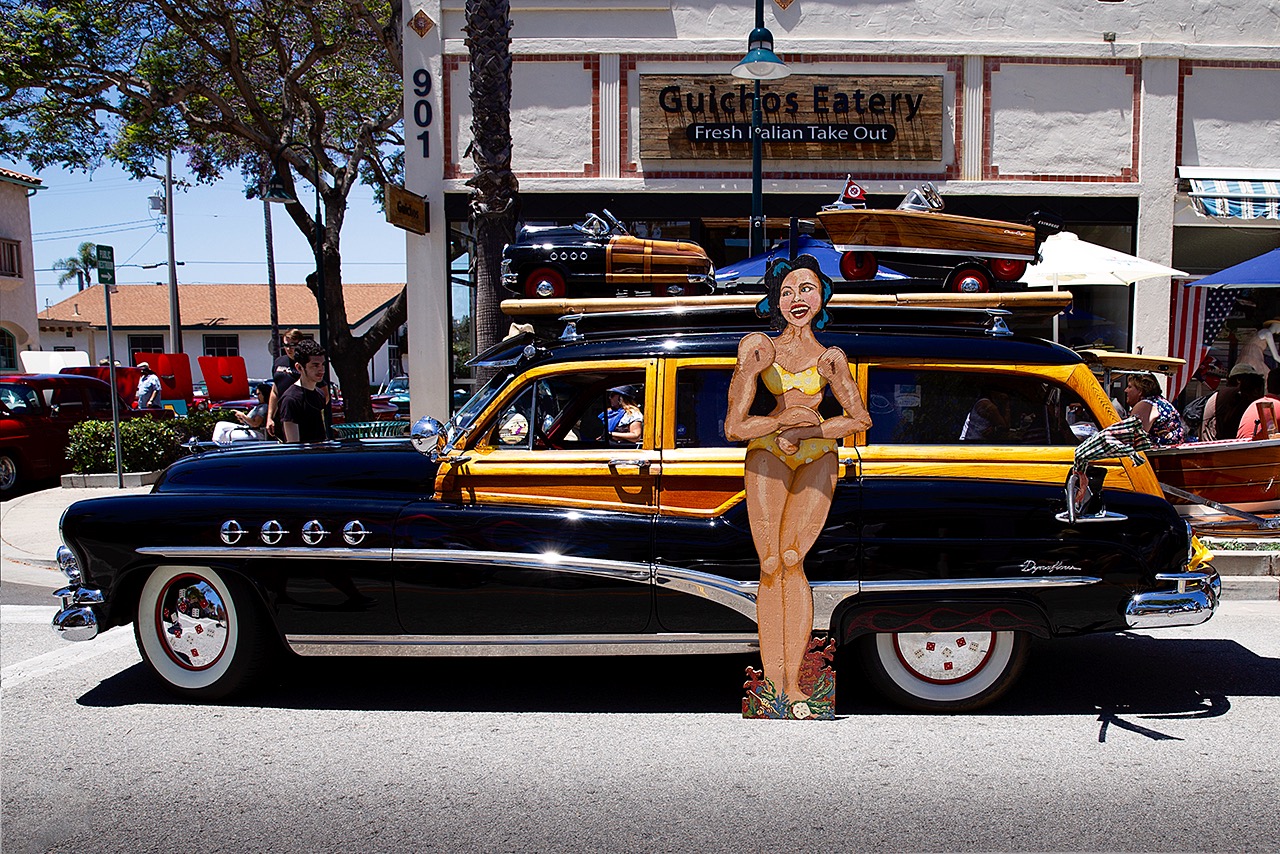 This ’51 Buick Roadmaster Estate Wagon Woodie points to the Pacific Ocean – which is only a few blocks West on Linden Avenue in Carpinteria. It certainly looks like it’s ready for a day or a lifetime at the beach: Surfboards? Check. Chris-Craft Pedal Car? Check. Girl in a Bikini? Check. 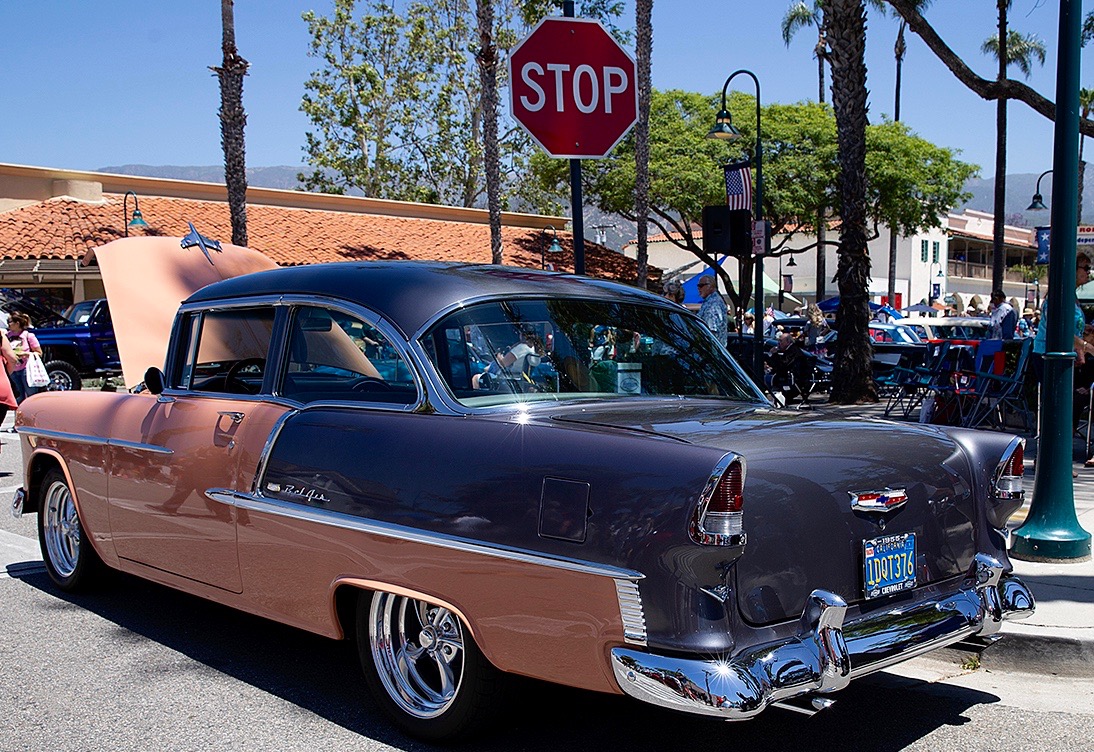 My favorite Tri-Five Chevy is the ’55 Bel Air. My favorite color combo for this iconic car is Shadow Gray over Coral – and here’s an excellent example. I recently learned that one of the options available to Tri-Five buyers was a 12V plug-in Electric Shaver kit. Take a Drive; Grab a Shave. Sure, why not?

Here’s another tasty ’32 Ford – this time a three-window coupe. The Hot Rodder ranks are somewhat split as to which ’32 configuration looks the best – with the fenders or without the fenders. Another ‘32 debate is Channeled or Highboy? Let us know your preferences by contacting us via the reply/comment window below. Thanks! 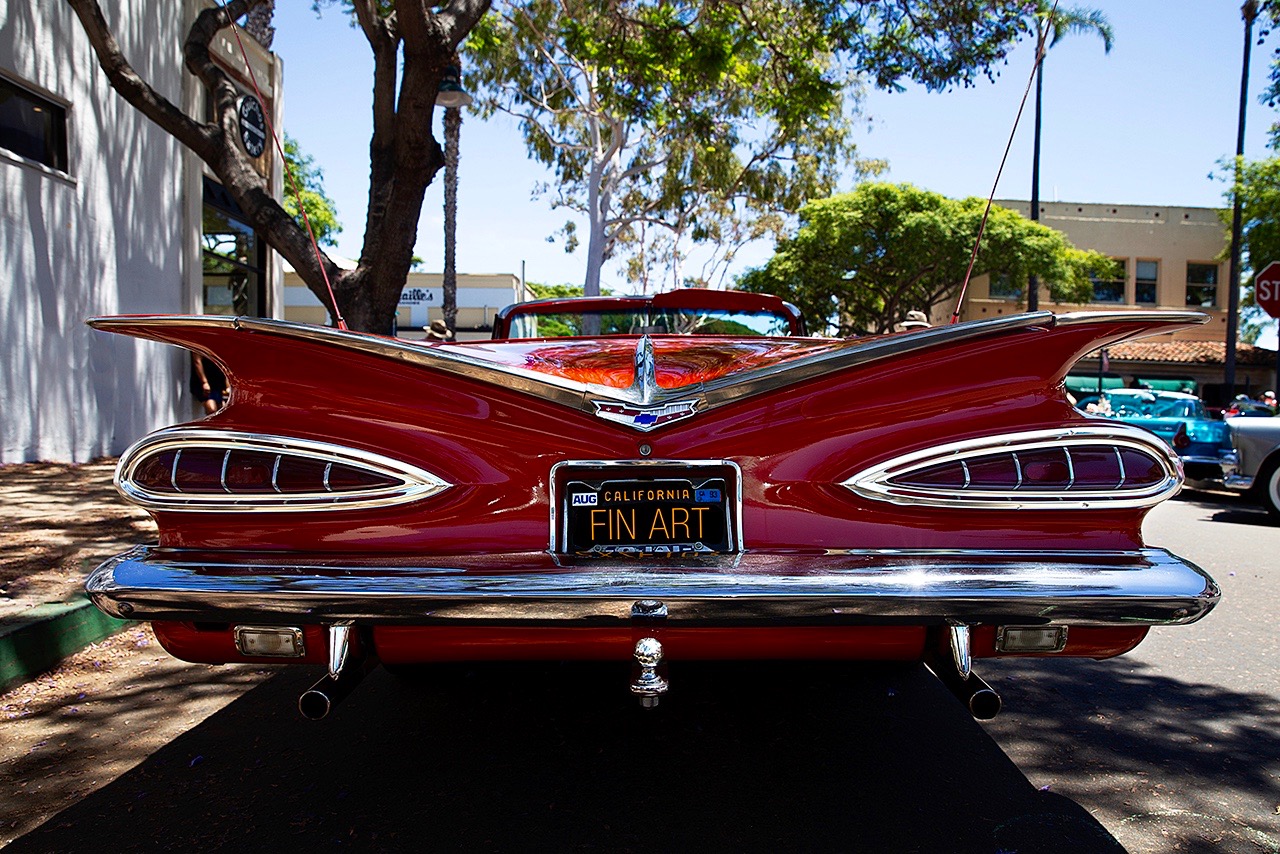 Here’s something you don’t see that often anymore – the bat-winged, cat-eyed tail of a ’59 Chevy Impala. Love them or hate them, these flopped-over wings were just one of the many design details created under Harley Earl’s supervision before he retired in 1958 after overseeing the design of 1960-1962 GM models. Legend has it that Earl wanted to trump Cadillac in the tall tail-fin era and his simple solution was to rotate the industry standard vertical fins 90°. Speaking of fins – we are now finished with this report. Thanks for visiting!