Car Guy Chronicle’s Jim Palam fights an urge to swerve to the vineyards and instead, uncorks a tasty car show report from Old Town Orcutt, CA. 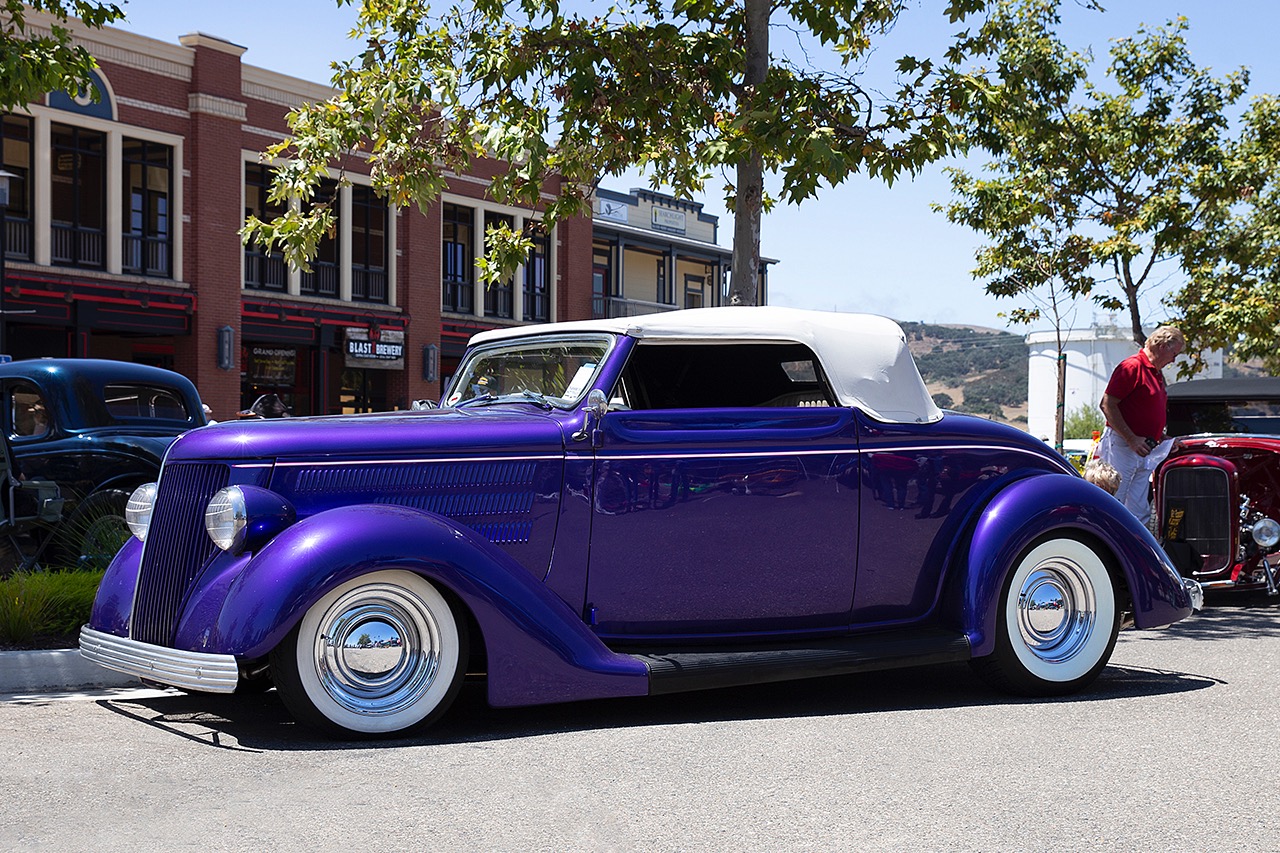 SHOWTIME: BENT AXLES STREET RODS! I’m going to give it to you straight: As I headed North from Solvang to Orcutt, CA on the 101, my thoughts were less about street rods and more about the ribbons of grape vines carpeting the rolling hills East and West of the freeway. It was Saturday, sunny and seventy degrees. Man, I could exit the freeway right now and head to a tasting room. I looked down at the digital dash clock. 8 AM. Man, that’s too early – even for seasoned oenophile like myself.

As I exited on Clarke Avenue and headed west to Old Town Orcutt and the 39th annual Bent Axles Car Show, I noticed two, custom roadsters motoring quickly up on me. I gave the drivers, both sporting dark Ray-Bans under fluttering silver hair, a thumbs-up as they passed me. I followed them to Broadway where there were over 200 hood-popped show vehicles, lined-up in a salute to American metal, artistic interpretation and the Car Guy lifestyle. Here, for you, is a taste of this casual, no trophies, and small town America rod and custom car show. 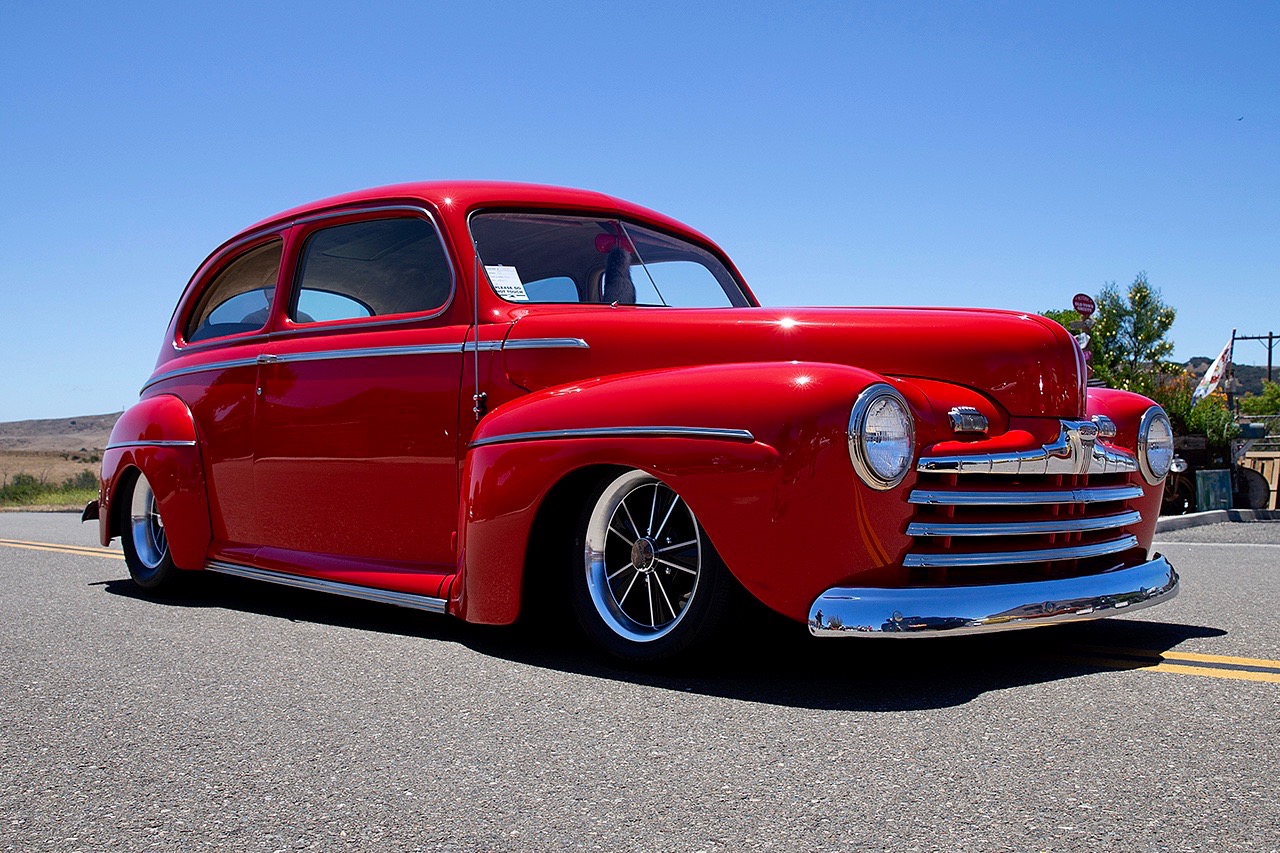 If purple doesn’t pop enough for you, then there’s always “Go-to-Red.” While Enzo built an empire painting his Supercars this emotionally intense color, one can’t forget that it’s also a favorite of bad-boy hot rod & custom builders from Brooklyn to Burbank. This ’46 Ford 2-door sedan looks poised to pounce on the outskirts of town. 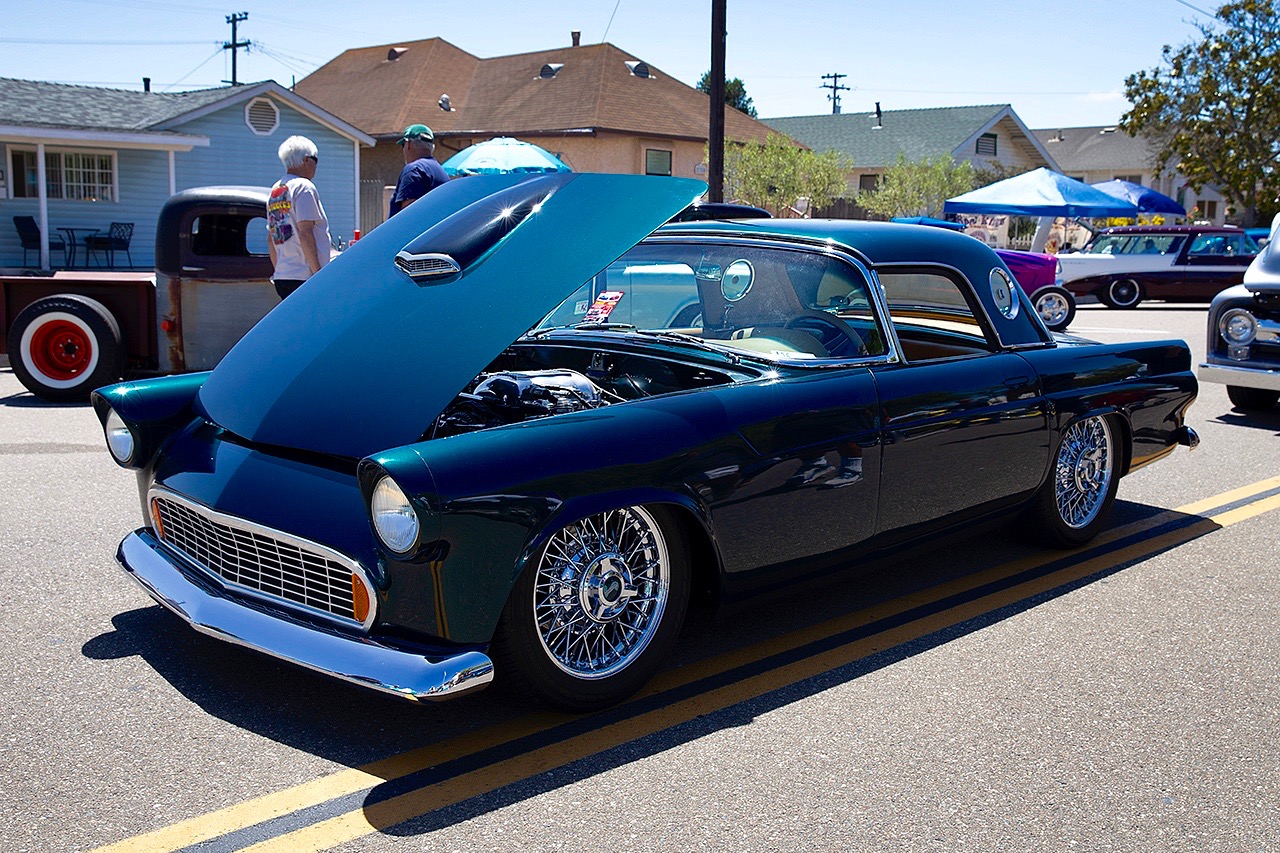 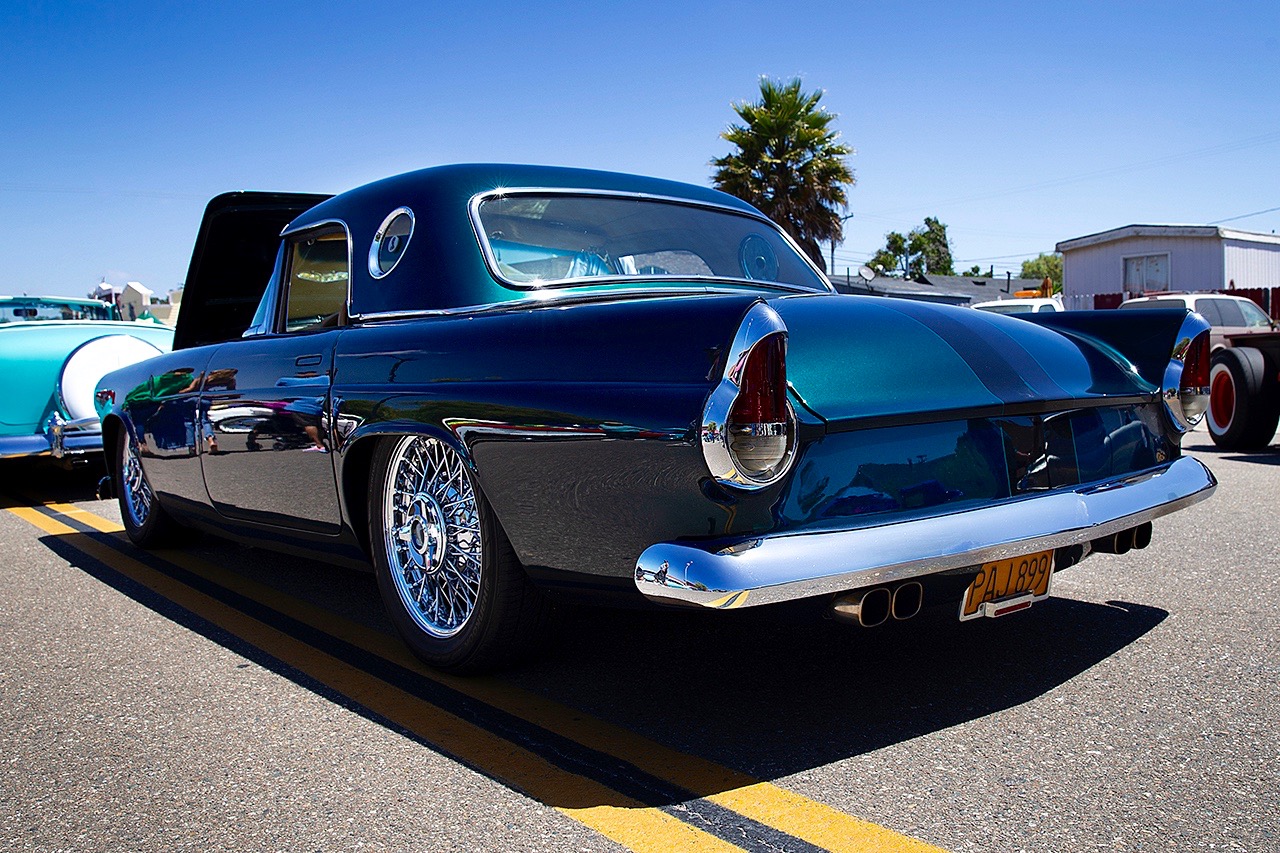 I love First Gen T-Birds – especially when they’re custom built with both performance and style in mind. Jim & Lynn Perske’s ’56 Resto-Mod ‘Bird was built by Jim Tucker Metal Works. It gets its thunder from a 4.6-L Ford Cobra Jet motor, it’s aerodynamic stance from an air-bagged Mustang suspension, and a unique esthetic with custom paint, chrome wire wheels and Mercury station wagon taillights. 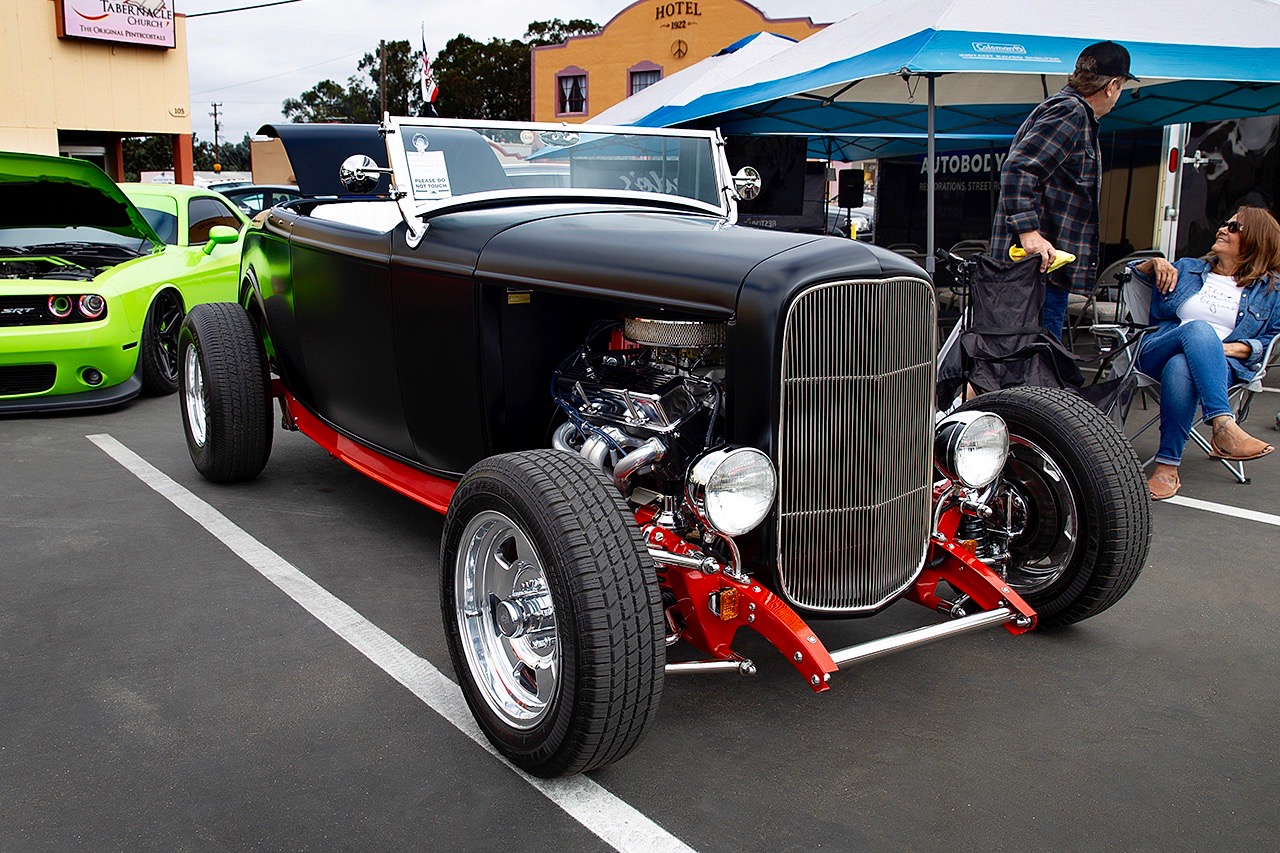 Less is more! Dave and Priscilla Pedrow took time building their ’32 Ford roadster to make sure everything is simple and functional. From the interior and exterior to the highway-tuned drivetrain, their Highboy is always a turn-of-the-key away from adventure. The red, powder-coated frame rails provide a striking visual underline to the body’s matte-black paint. Dave seemed most proud of the roadster’s vintage eight-track music player. Got an Iron Butterfly cartridge, Dave? 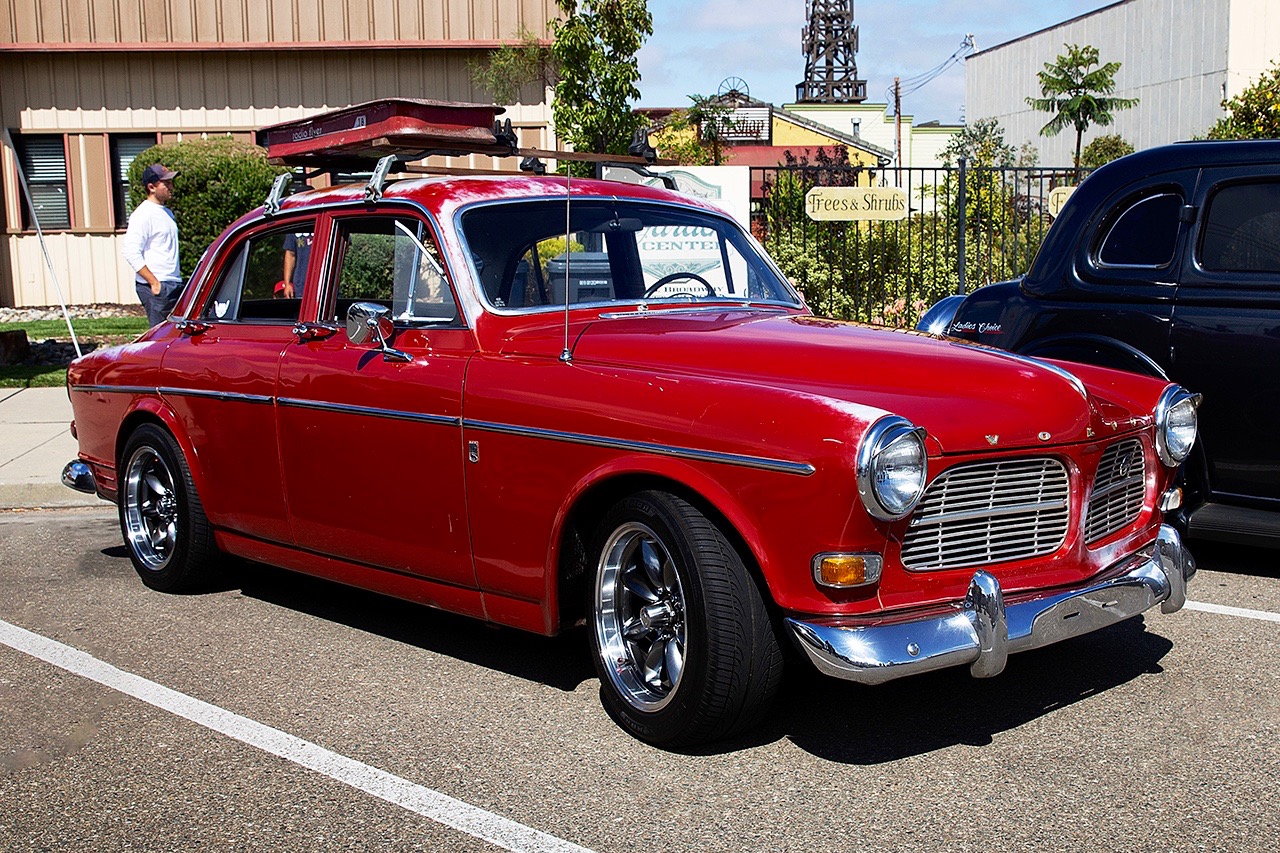 It’s the kind of car you’d expect a college professor to drive, but something tells me the owner of this ’66 Volvo 122S sedan is missing classes and racking up kilometers on the road to happiness! The giveaways are the low, sports stance, the Minilite alloy wheels and the road-worn paint. And, one can’t overlook the Radio Flyer wagon bed bolted to the roof rack. 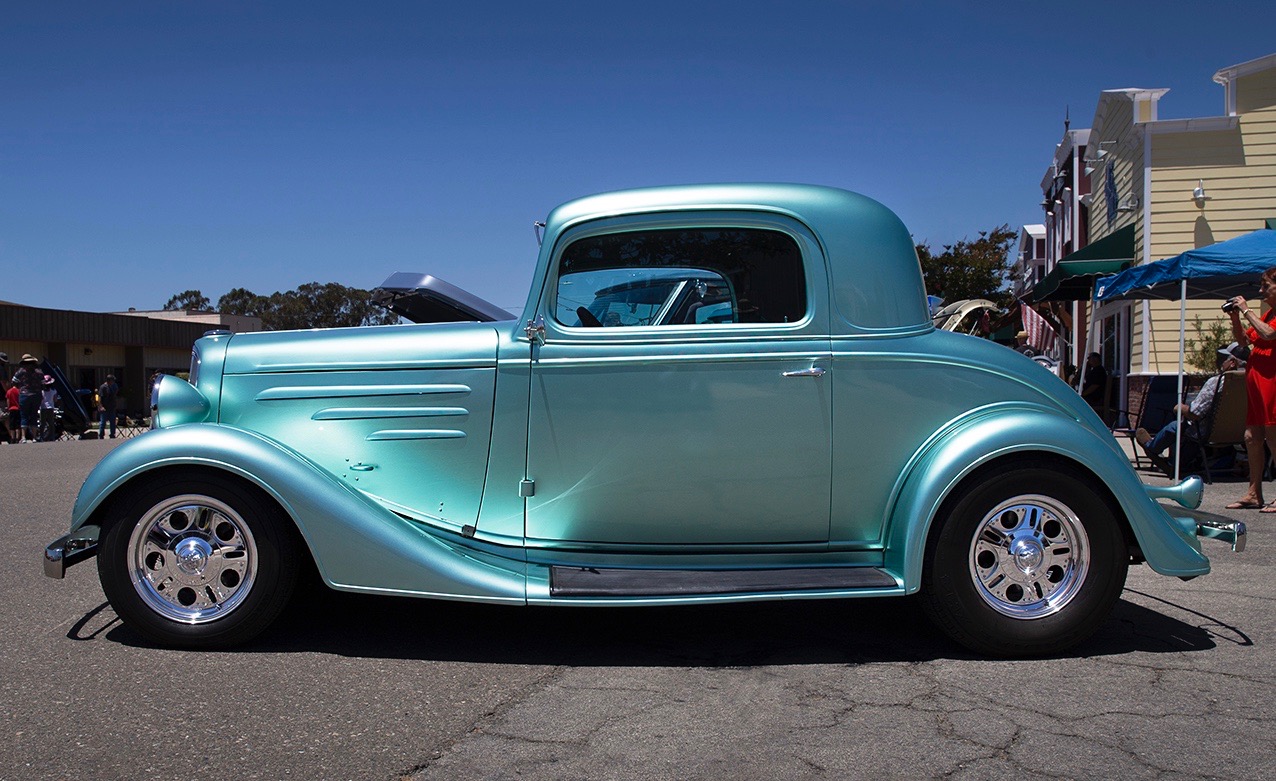 This minty ’33 Chevy 3-window coupe was literally glowing when I spotted it as I was shooting my last shots for the day. Apparently, some mystery guy pulled up and parked it in the middle of an intersection and just walked away. I wish I could have interviewed him, as I really wanted to find out how he got the hypnotizing, mother-of-pearl-like paint finish. 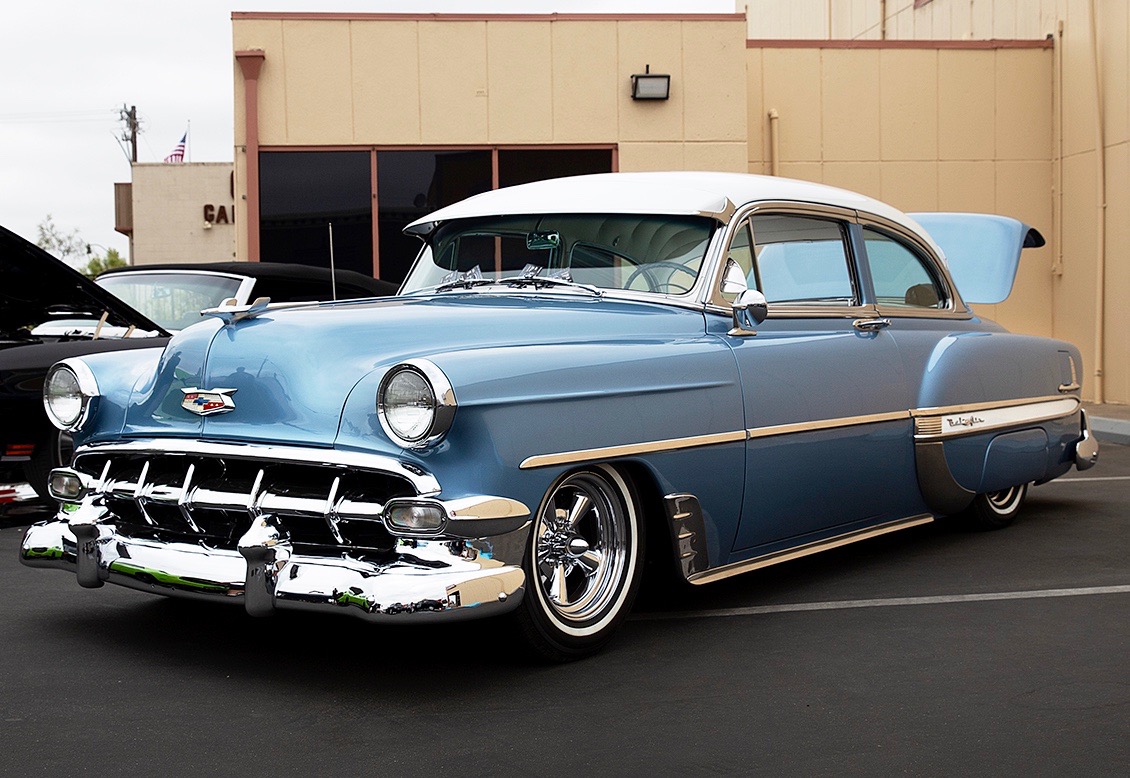 My parents owned a ’53 Chevy sedan. It’s the car I learned to drive in and it looked nothing like Joe Hernandez’s perfect, ’54 Chevy Bel Air. That the brightwork looks showroom new has everything to do with Joe working for New Age Metal Finishing. The color is a combo of ’69 Chevy Blue for the body and White Pearl for the top. Engine and transmission is period correct: Inline Six and three-on-the-tree. 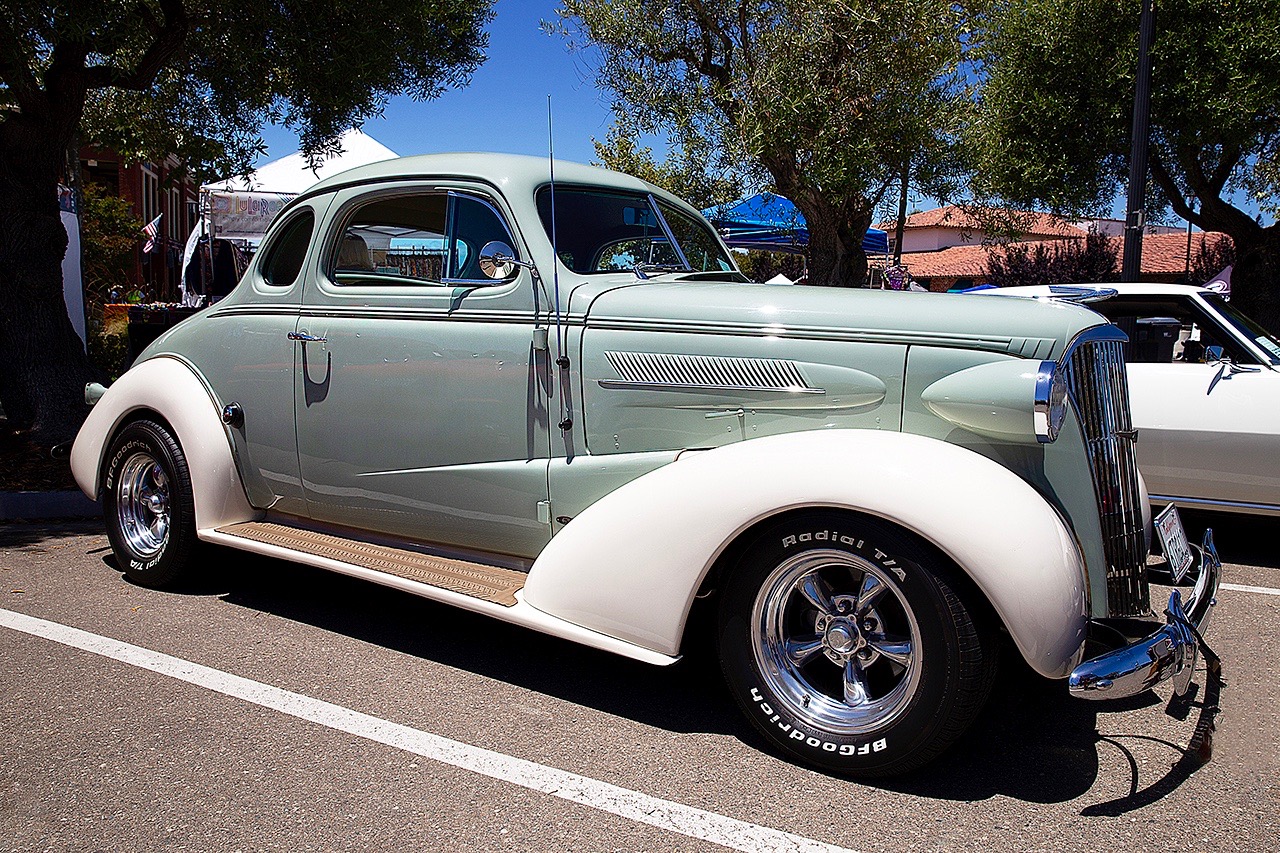 Aida Glynn’s two-tone ‘37 Chevrolet Master coupe is a stunning example of the 1930s ‘Fat Fender’ style. Jules Agramonte, who is best known as the designer of the ‘34 La Salle, designed it. The coupe’s ‘Diamond Crown Speedlines’ are the body creases that run from the fender valleys, across the side engine panels and cowl, and then dramatically down across the door panels. 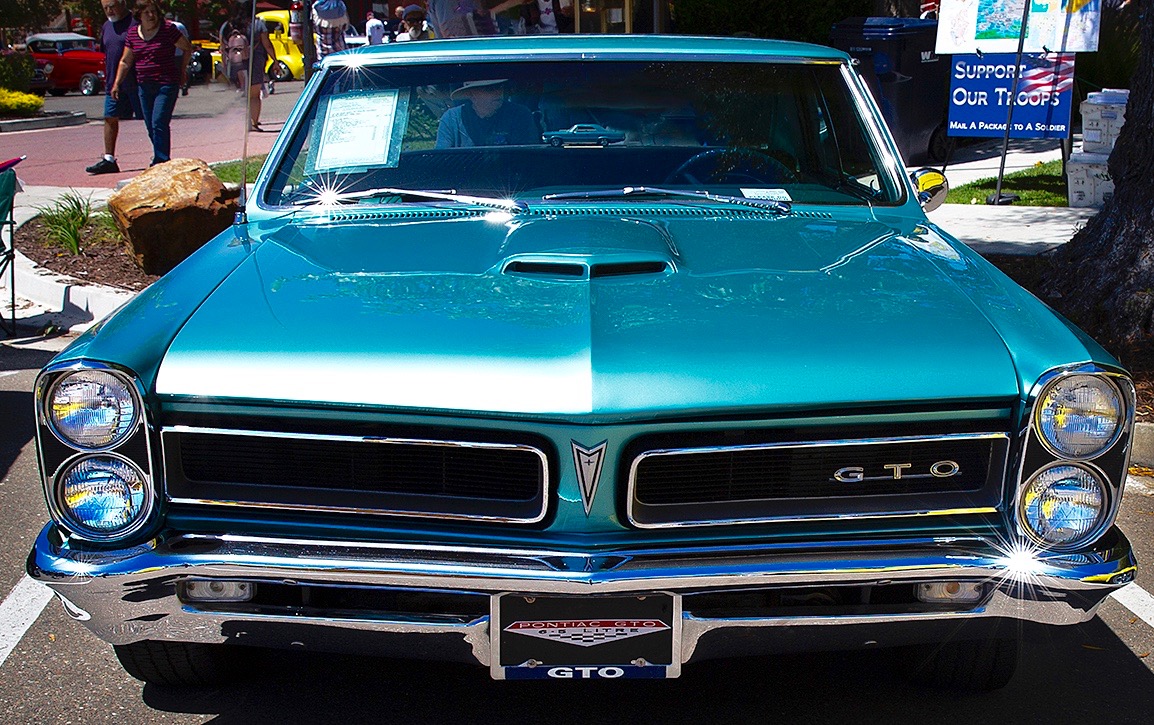 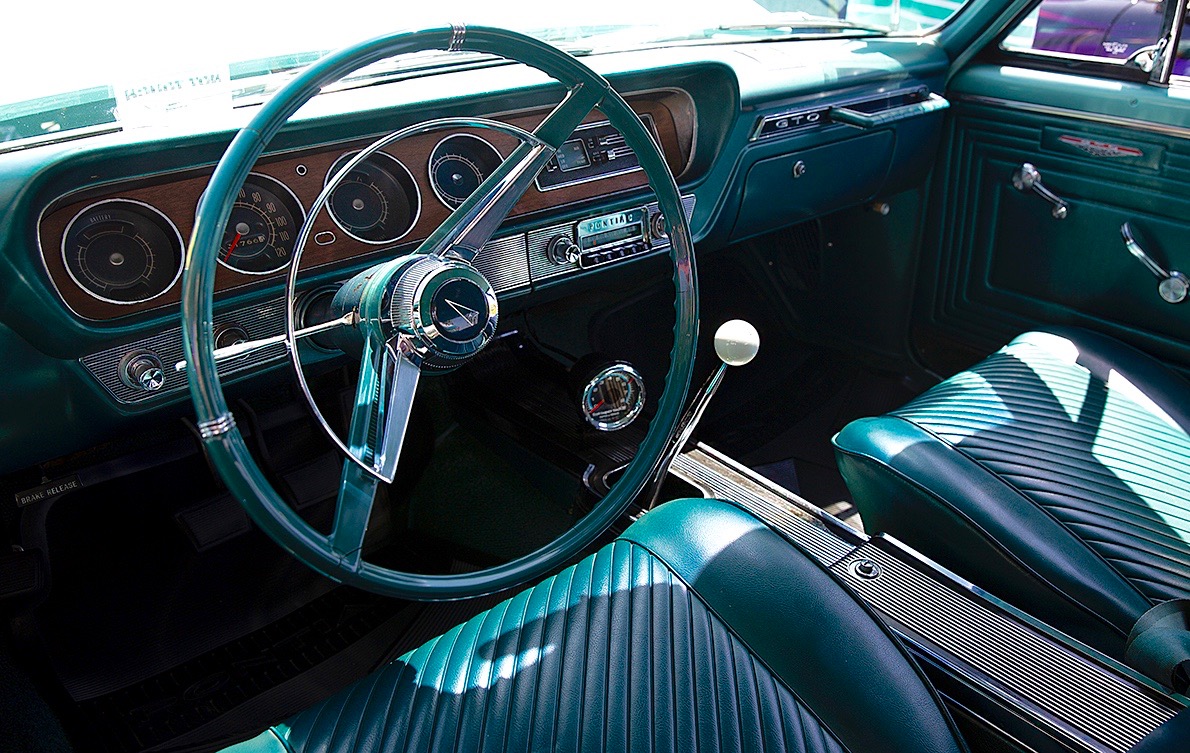 What’s your favorite GTO? Mine was the ’66, in Marina Turquoise Poly. This is Santa Marian Mike Glenn’s ’65 in Fontaine Blue Poly. It’s my new favorite GTO! As originally shipped, this Gran Turismo Omologato came with a four-speed, four-barrel 389-inch V8 with dual exhausts, plus bucket seats and a push-button radio. I was always impressed with the crisp, line-and-radius design of the ’65 – a sensibility that carried through from the exterior to the interior. This GTO carried a sticker price of $3,428.46. 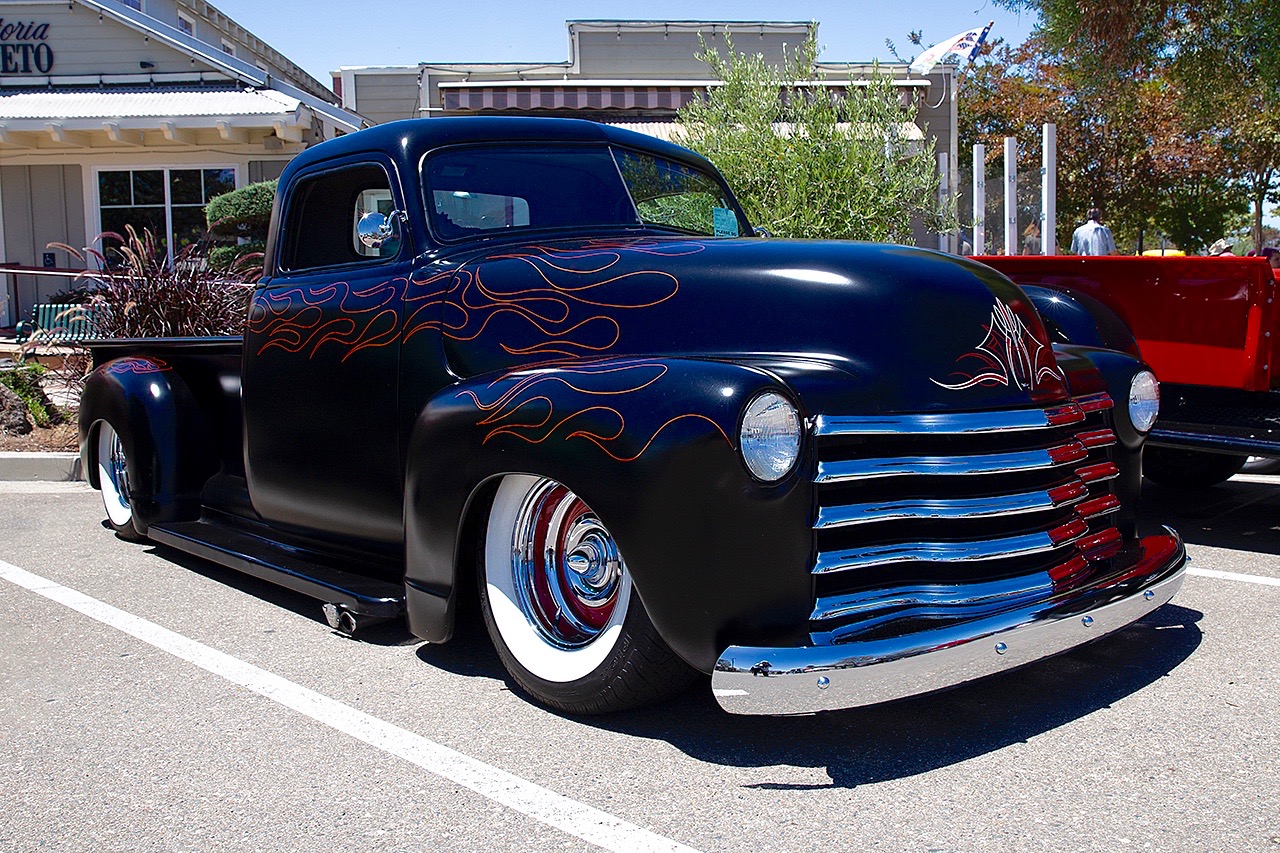 Paul Baray Jr’s shaved and slammed ’54 Chevy pickup is a curvy canvas for pinstriping. Many associate the 1950s as the decade that these hand-painted adornments were introduced, but they actually date back to the days of horseless carriages where contrasting color stripes were often applied to carriage body panels and wooden wheels. But it was the 1950s and Ken Howard – better known as Von Dutch – who took the art beyond panel edges, creating fantastic flourishes and intricate designs on hood noses, light buckets and anywhere an artistic statement needed to be. 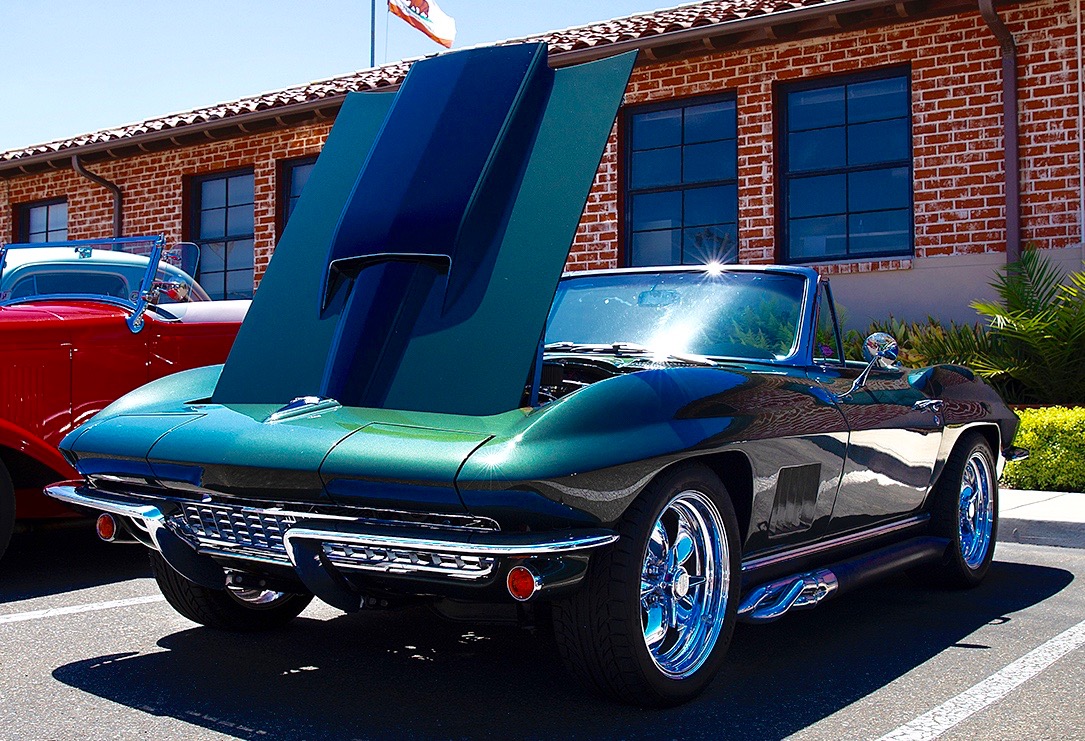 The ‘67 Corvette holds a special place in my heart – and this beautiful, modified roadster has got my blood pumping. While I’m a big believer in “Leave It Stock” I don’t have a problem if someone wants to add their personal touch to their Baby. Love the green re-paint, chrome spinner mags and especially the sidemount chrome header exhaust pipes. 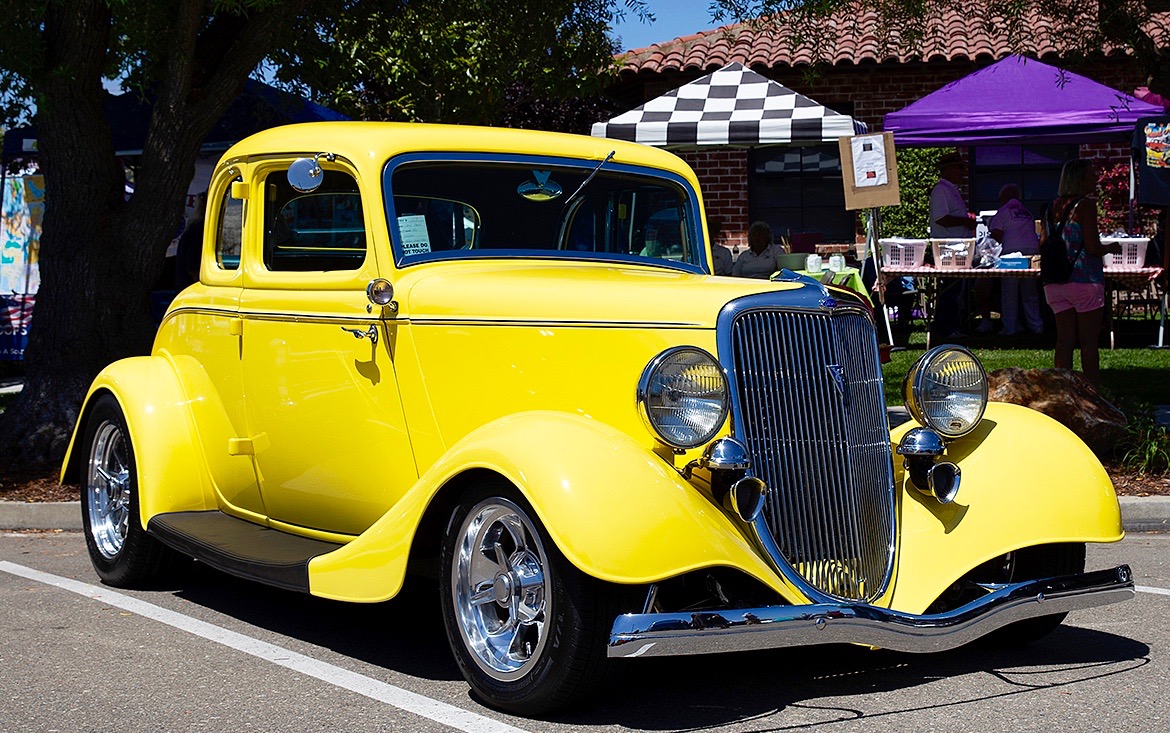 The Bent Axles Car Show may be a modest show in a small, agro-town, but it still attracts car enthusiasts from all over California and points beyond. John Carey brought his yellow, flowing-fender ’34 Ford coupe down from Fresno. One of the many draws to the show is the Sunday, Santa Maria style BBQ and sweet tradition of Strawberry Shortcake for the participants. 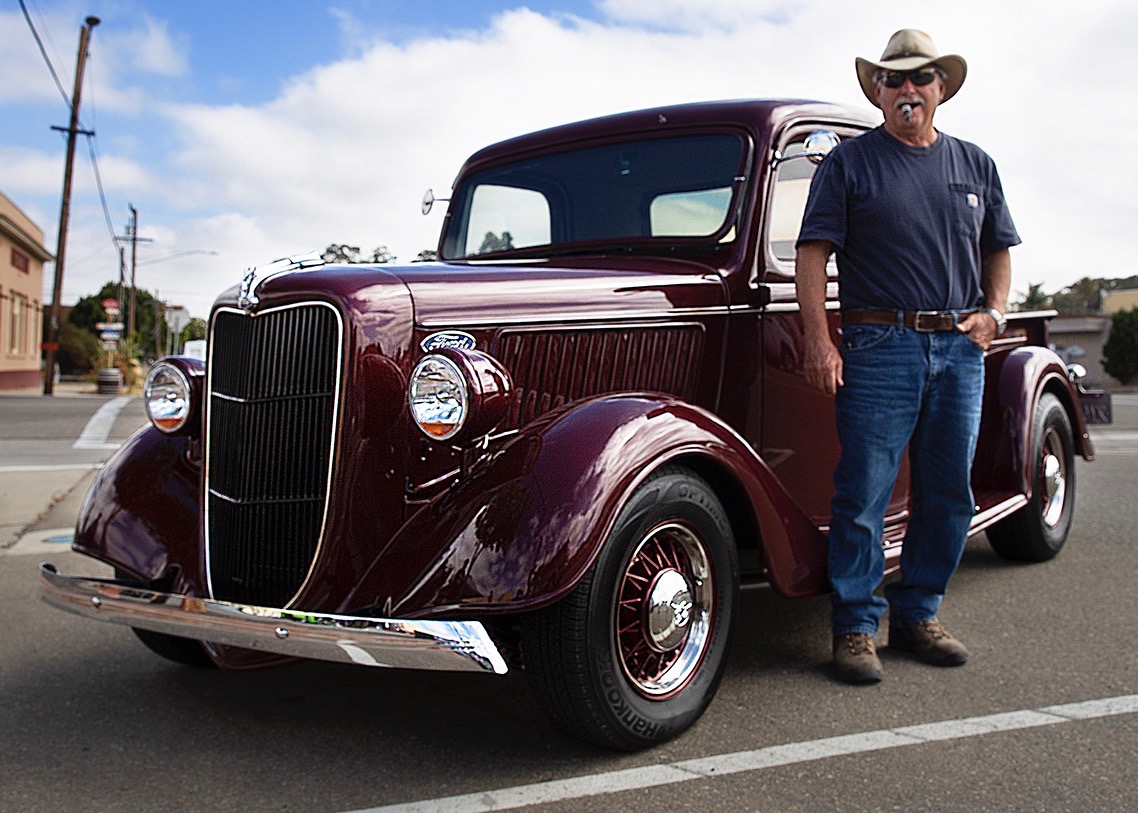 Local entrepreneur Duane Miroballi took a break from Saturday business to puff on a fat stogie and check out the show. His nicely restored and modified ’36 Ford pickup could easily have been one of the show vehicles. Under the burgundy Ford’s  hood is a 350 Chevy V8 mated to a 700R4 overdrive transmission. I’m guessing the only thing he’s hauling in this beauty is ass! 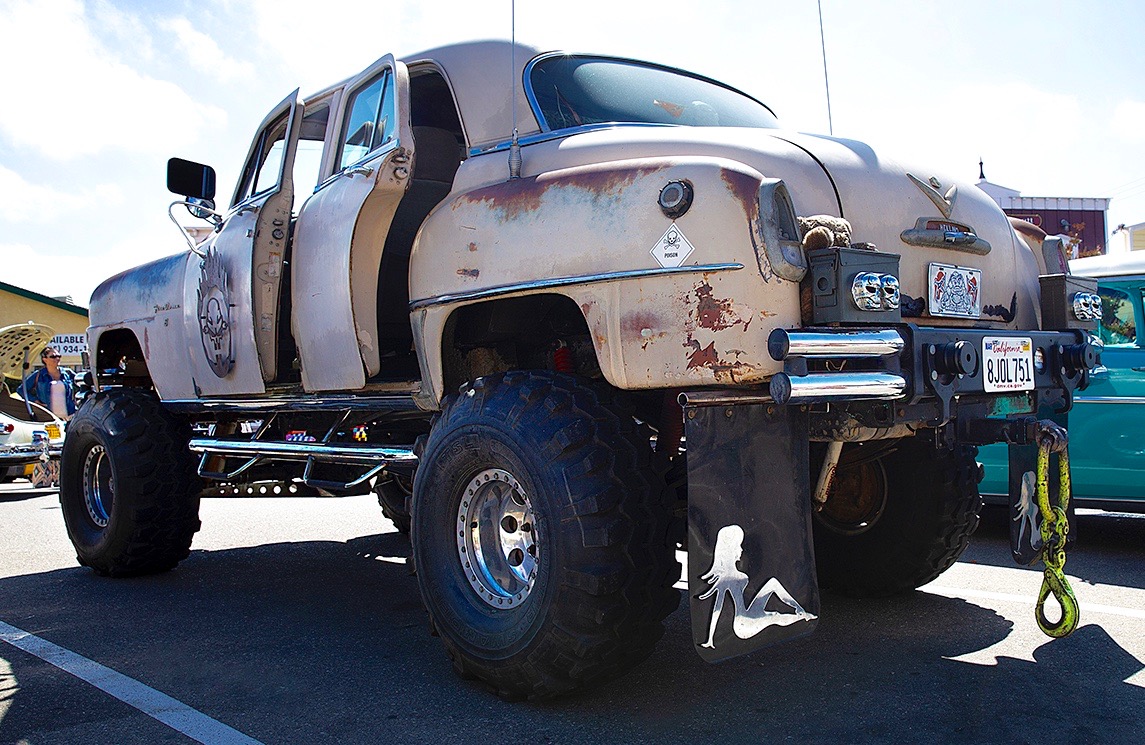 Dennis Patton’s ’53 DeSoto Fire Dome 8 sedan is the kind of vehicle you’d order from Apocalypse Motors at the corner of Fury Road and Armageddon! He brought two brash and burly vehicles from his Hell No Performance garage to the show – the Mad Max inspired DeSoto and a ½ ton Pro-Street ’73 Chevy pickup.