‘Expect the unexpected’ is why people from here and abroad flock annually to Bill Warner’s spectacle in the sunshine. Dan Scanlan brings us the best of the best from SHOWTIME: 2021 AMELIA ISLAND CONCOURS, complete with photos and videos. 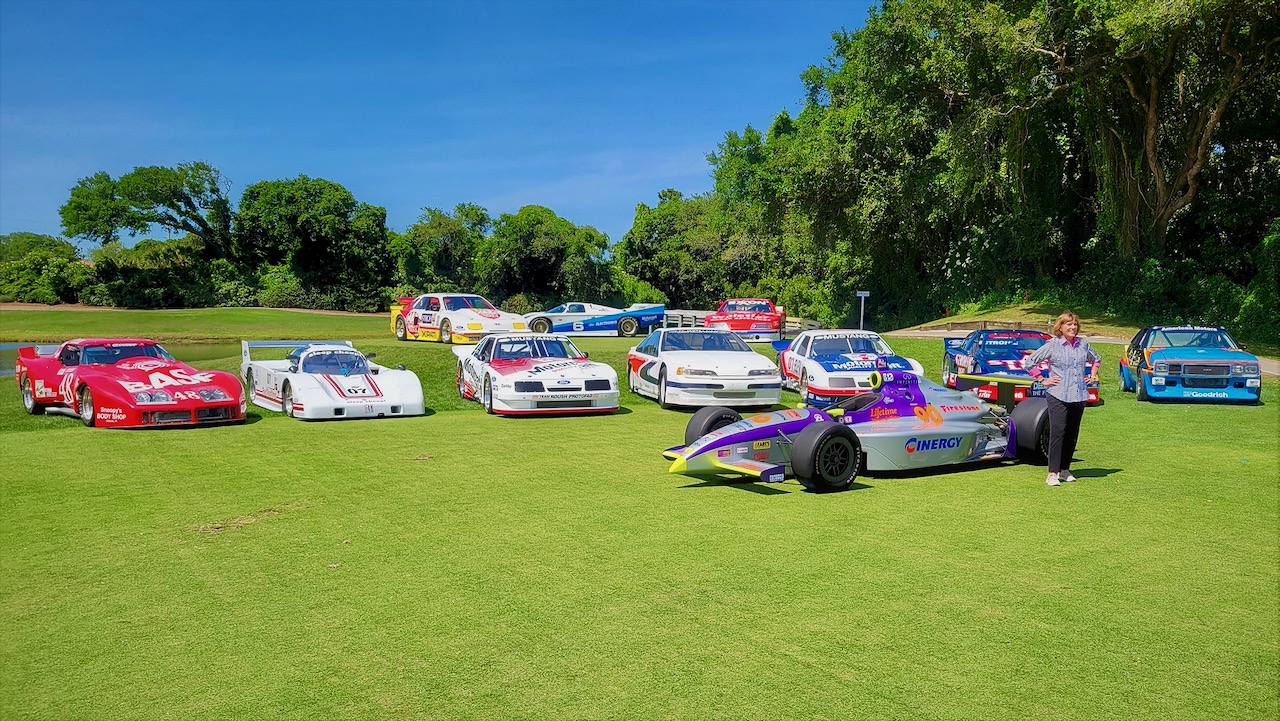 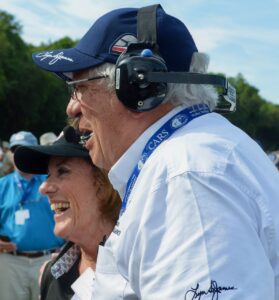 There was grace with pace last week at the 26th Amelia Island Concours d’Elegance. For pace, how about 3 Dog Garage’s ‘85 Roush Ford Mustang IMSA racer in the Cars of Lyn St. James Class? She thundered onto the show field in that Mustang that secured her first Daytona 24-hour class win in 1987, with co-drivers Bill Elliott and Tom Gloy. After some gentle grassy burnouts, she stopped next to Concours founder/chairman Bill Warner, right,  and whooped, “That was so much fun, could I do another lap?”

Car owner Ross Myers was just as happy that St. James, who he called a “phenomenal figure” in racing, got to drive it. “When she started, it was a man’s deal, and I admire her so much because she is so feisty and she never gave up,” he said. “If she got in a seat, she could go fast. When people gave her a chance, it did not matter if it was IMSA GT, IndyCar, land speed, she would give it her absolute best and she was fast.”

The 2020 Concours was the last big public event in Florida before the world shut down due to COVID-19. This year’s event was the first big concours held, moved from March to May in the hopes that more people would be vaccinated. Held under sunny hot skies, the concours saw a crowded show field on fairways at the Golf Club of Amelia Island next to the Ritz-Carlton, Amelia Island. 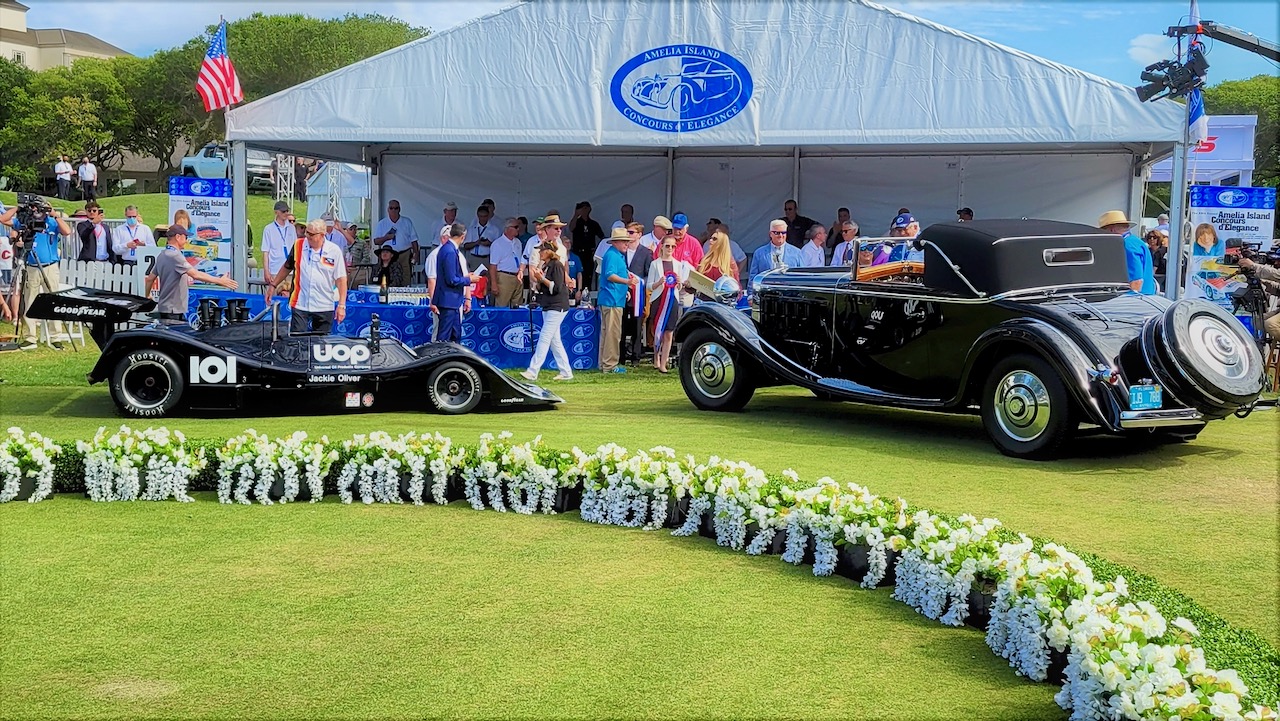 Grace and Pace came together at the end, as seen in Charles and Jill Mitchell’s elegant ‘26 Hispano-Suiza H6B Cabriolet, crowned Best in Show Concours d’Elegance. Bought new by the King of Tunisia, it was re-bodied in 1932 in its current design at France’s Henri Chapron Works. “It’s just elegant, it’s raw elegance. It feels great,” Charles Mitchell said. “This is our first show ever!” Low and mean is the best way to describe James Bartel’s black knee-high ‘74 Shadow DN4 Can-Am racecar winner of Best in Show Concours de Sport. A championship-winning racer driven by Jackie Oliver, he said he was overwhelmed to win. “I never expected a contemporary race car to win at Amelia, just didn’t expect it,” Bartel said, holding his award. “There is nothing pretty about it. It is all a sinister, mean, serious car.”

One corner of the display of 240 classics was devoted to eight Shadow Can-Am racecars as well as open wheelers. Racer Don Nichols conceived the Shadows as highly aerodynamic, with “flat-out speed,” Bartel said. The Shadows on display included a ‘70 MKI, ‘71 MKII, ‘72 MKIII, ‘73 DN2 and ‘74 DN4 Can-Am cars. There was also a ‘76 Shadow DN6B F5000 and Formula One car. But it all began with the knee-high ‘70 Shadow MKI prototype with such advanced thinking from Nichols and designer Trevor Harris as front and rear pop-up air brakes and wind-cheating venturi channels that wrap around rear wheels. Test driver George Follmer had to lie almost prone with a small steering wheel between his knees. 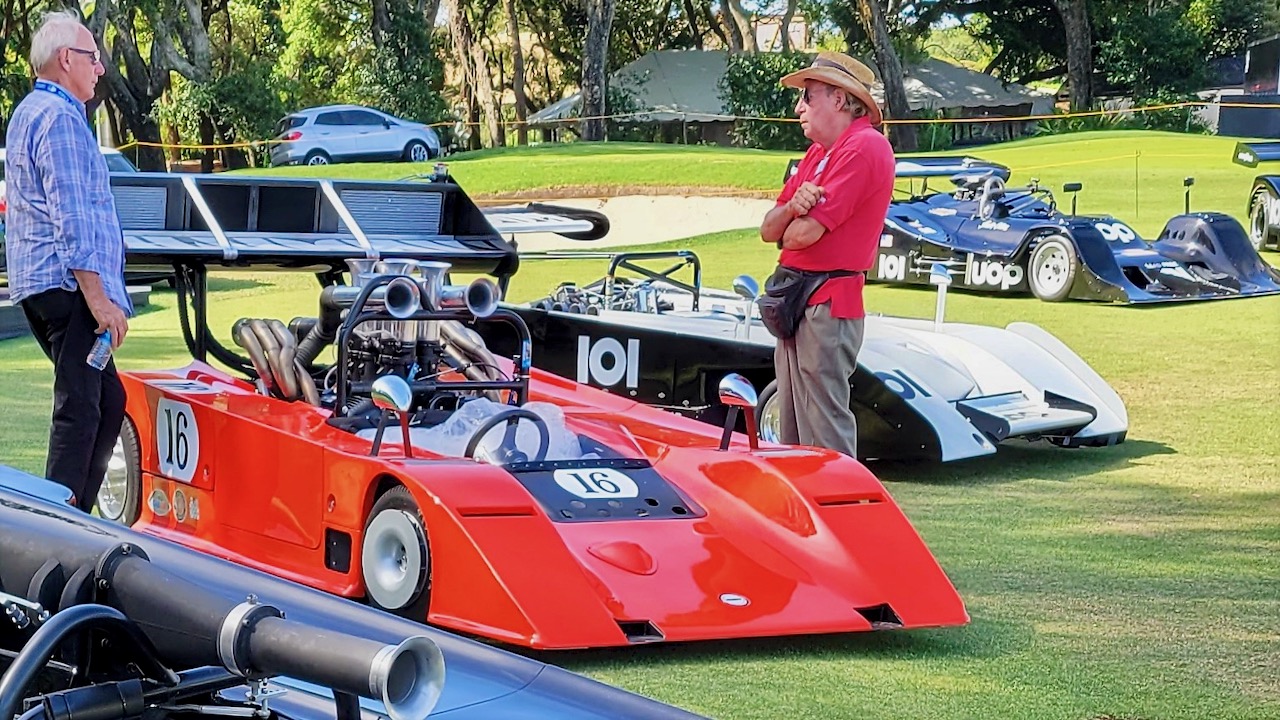 “They envisioned having a car that was aerodynamic and just flat-out fast like nobody else,” Bartel said. “… They never got to try the active aero because it was outlawed. They started in 1968, and were finishing it in the middle of 1969 when the FIA said no moveable aero.”The car will be displayed next year at Daytona’s Motorsports Hall of Fame of America, the air brakes popping up on demand for fans.

Some past favorites made appearances again, such as Andre Dubonnet’s sleek ‘38 Hispano-Suiza Xenia. The sixth-annual Amelia Concours Best of Show award winner, headlined a featured class of 10 “Hissos” that included a ‘12 Alfonso XIII LWB Torpedo Sport and T-15 Alfonso XIII, and one of the last of the elegant line – a ‘37 J12 Berline Le Tourneaur et Marchand coupe with a 575-cubic-inch 12-cylinder engine. One of the most expensive cars of the time, it’s now in the National Auto Museum, from the George Harrah collection. 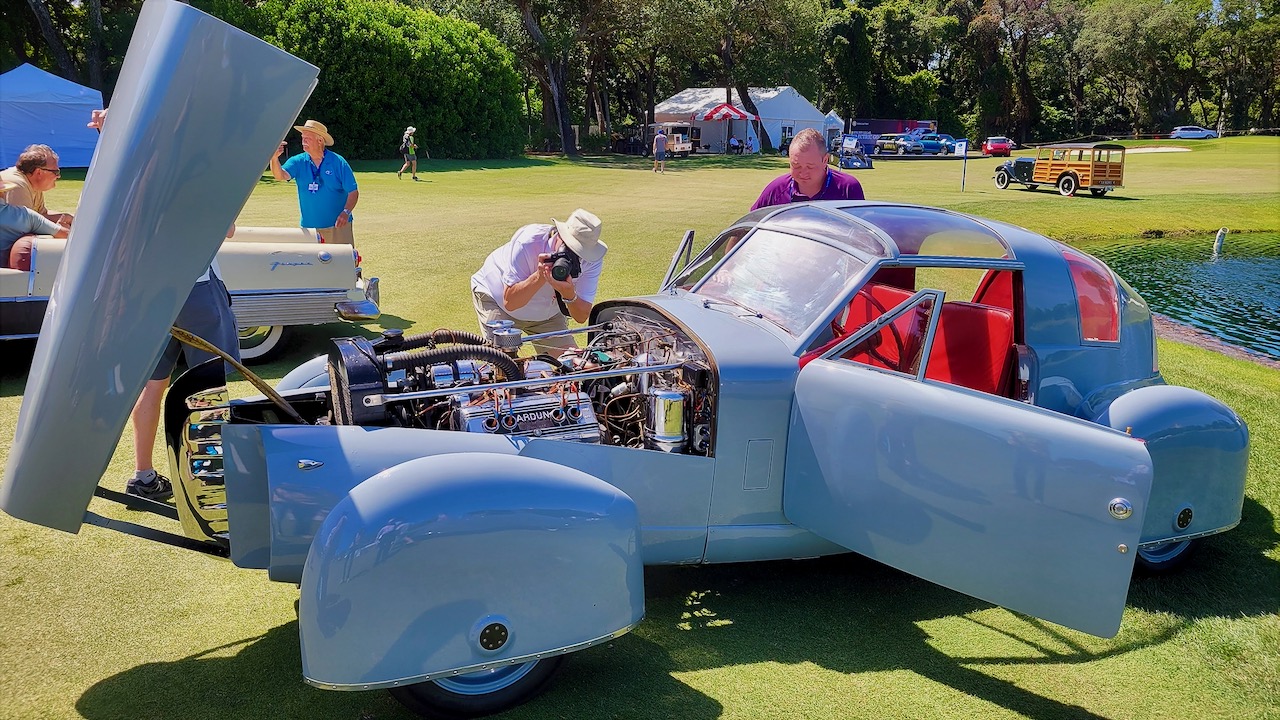 One car that turned a lot of heads was the Tasco Special, Gordon Buehrig’s design study prototype featuring the first application of T-Tops, and powered by a unique dual-carb Ford Flathead V-8 with Ardun OHV conversion heads, engineered and manufactured by Zora and his brother Yuri, Arkus-Duntov at their small shop in Queens, NY. That was before Zora became Corvette Chief Engineer. 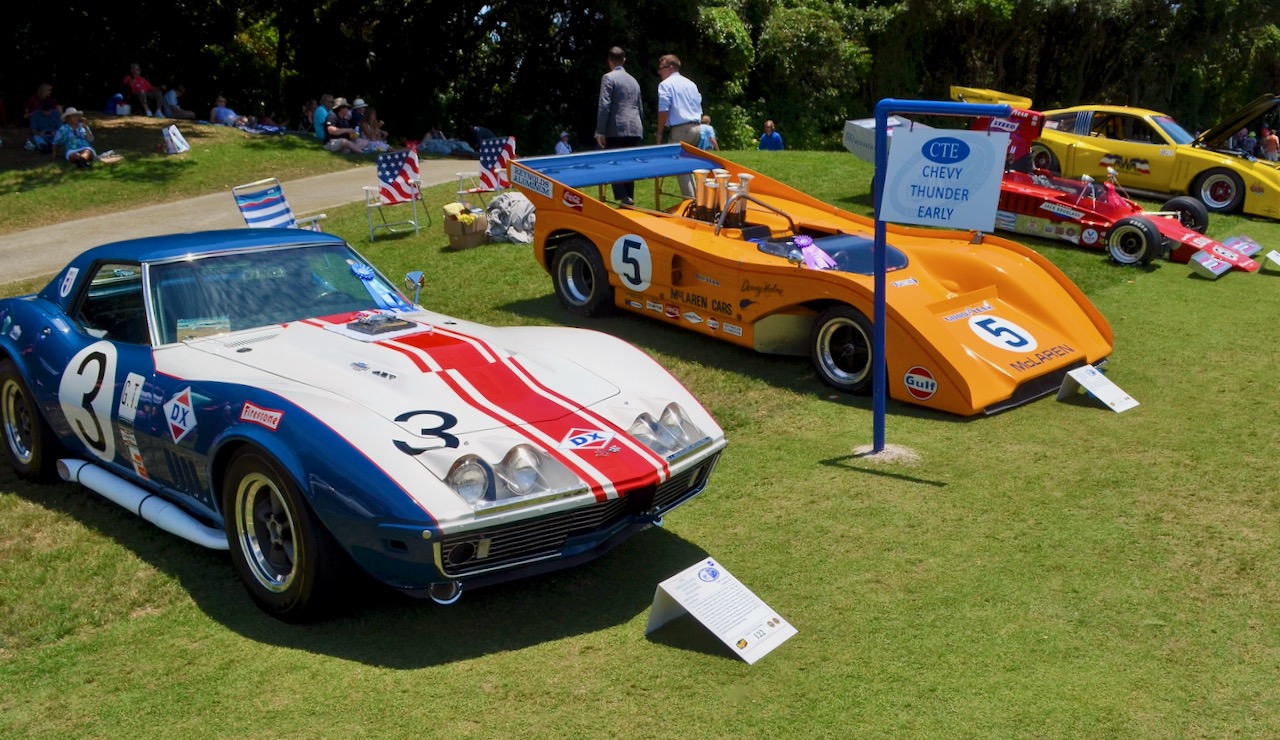 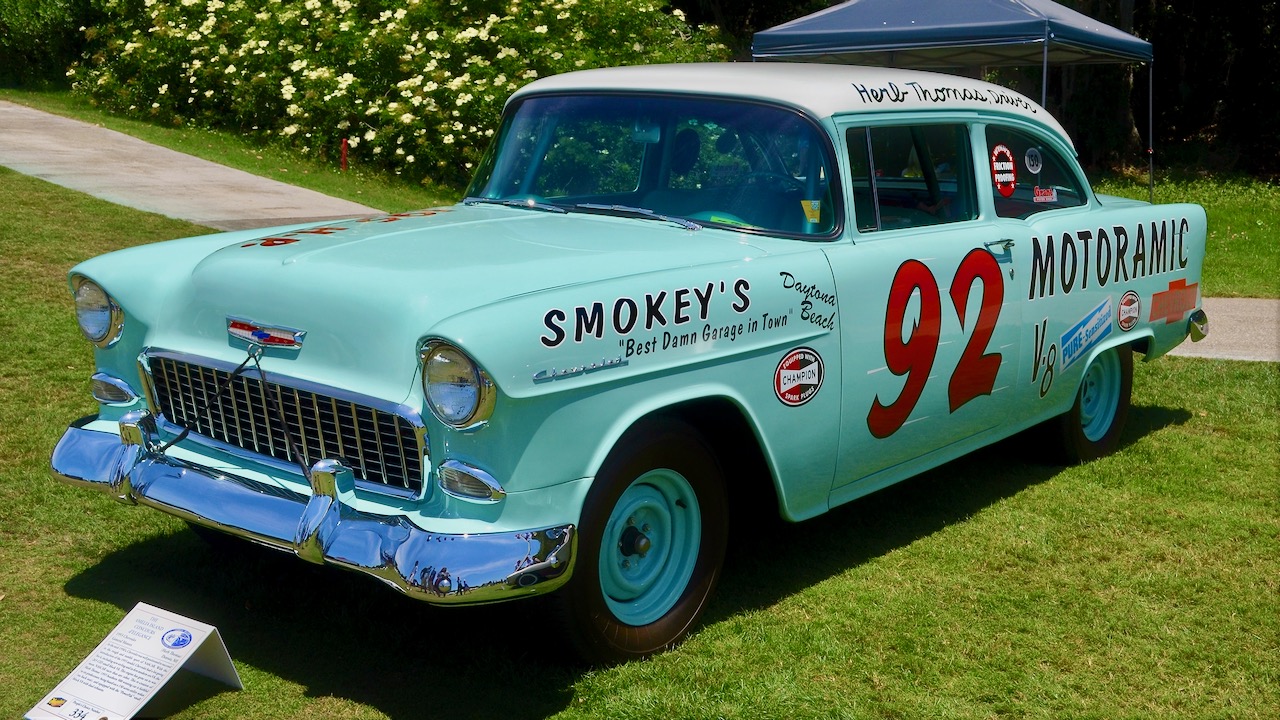 Another winged warrior there also had radiators in its wing, parked in the Chevy Thunder display next to a ‘73 Lola T330/F5000 and ‘71 McLaren M8F Can-Am racer. The only one of its kind, Roy Woods modified the ‘78 Chevrolet DeKon Monza with twin turbochargers and the special rear wing for George Follmer, resulting in 1,100 horsepower. Last raced in 1980, it sat in Follmer’s Porsche dealership untouched for years before it was sold, never run again. It will be racing again at August’s Rolex Monterey Reunion. 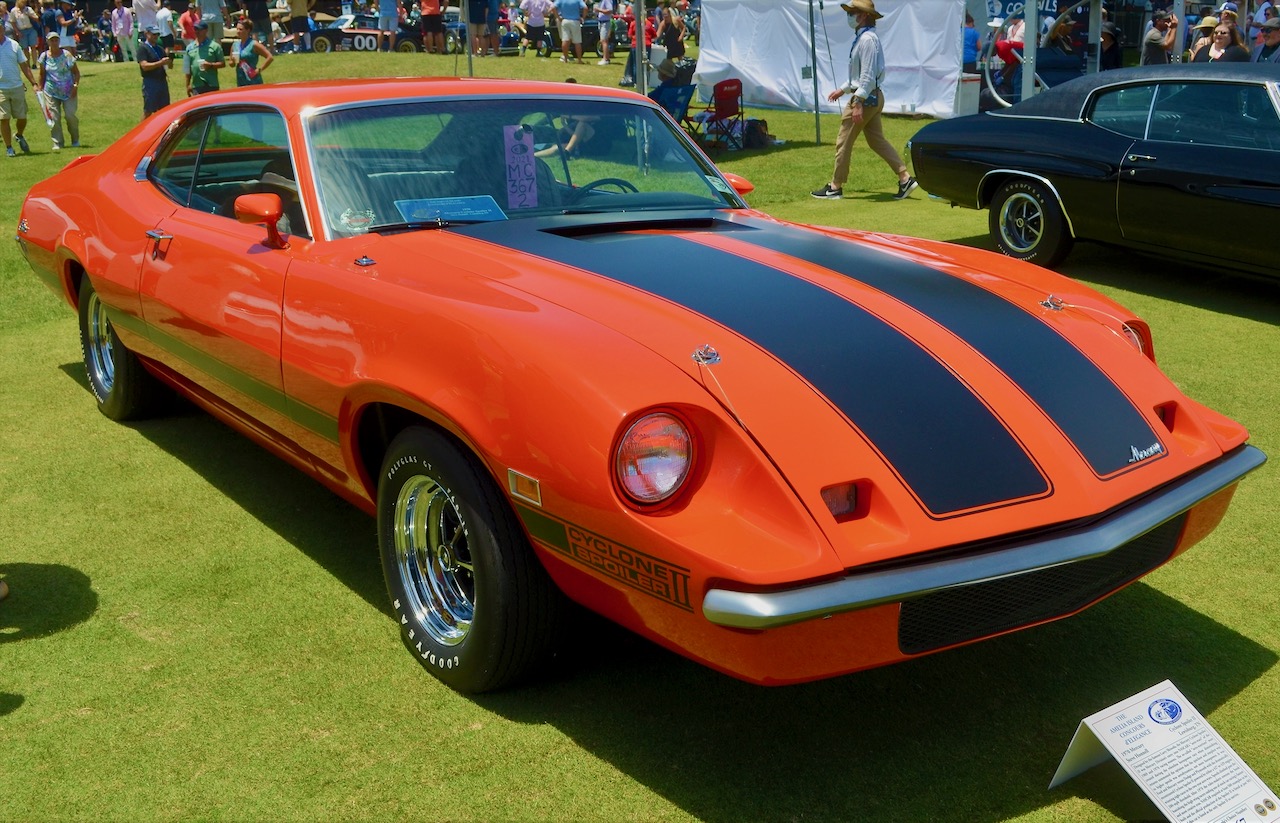 There was also a Muscle Cars of 1970 Exhibit featuring the radically-streamlined ‘70 Mercury Cyclone Spoiler II with sloped nose, scooped headlights and tail spoiler. It and the Ford Torino King Cobra were designed by the legendary Larry Shinoda and his staff at Ford’s Special Design Center and built at Kar-Kraft to beat the winged ‘70 Plymouth Superbird, (one shown nearby) on NASCAR’s super-speedways. The planned production run never occurred; this the only survivor of two made. 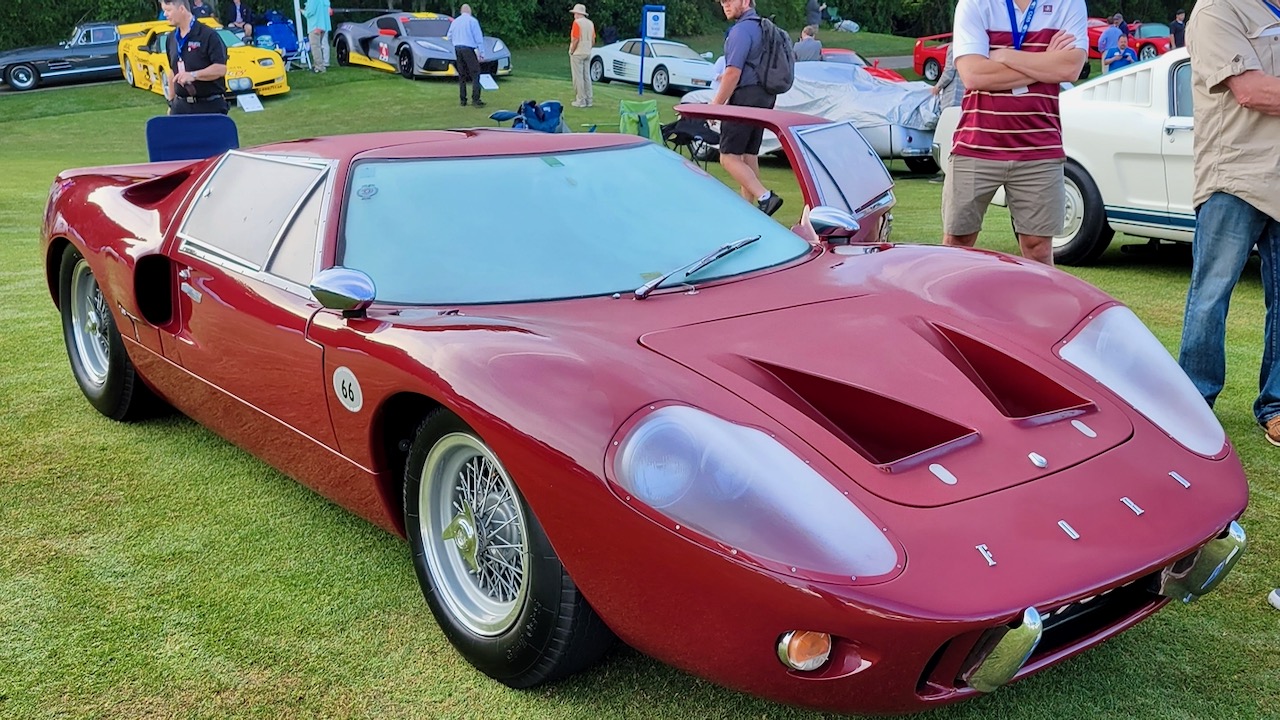 Another Ford that looked like it should have racing history, but didn’t, was the sleek and very low ‘68 Ford GT40 Mark III owned by Gary Bartlett. He took it on the road tour into Fernandina Beach the Friday before the Concours, then showed the rare two-seater on the show field – rare because it is one of only seven Mark III Road cars built at FAV in the UK, and not an endurance racer. Inside, its gearshift was moved to the center console, for driver convenience, compared with the Mark I Road Car and GT40 racecar’s door sill mounted shifter.

The Supercars of the 1990s Class included a ‘94 Toyota Supra Mk IV, ‘86 Ferrari Testarossa used in TV’s Miami Vice, and a ‘88 Porsche 959S. Gioel Molinari’s Redshift 75 Collection brought a ‘99 Mercedes-AMG CLK GTR, cleaning the lift-off nose and tail on that street-legal 604-horsepower V-12 version of the FIA GT Championship racecar before the show started. Its mid-mounted 6.9-liter V-12 has 604 horsepower and can propel it to 214 mph! 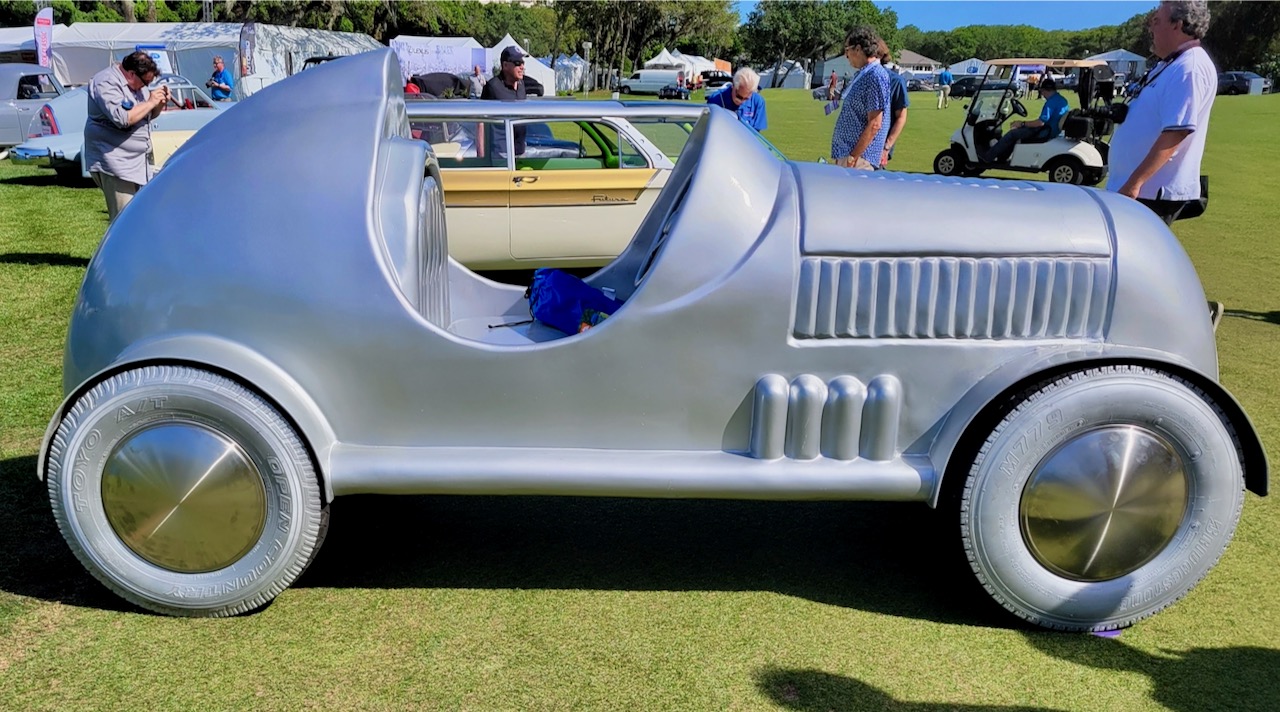 Across the field was the Weird & Wonderful Class, which included the ‘09 Monopoly Speedster – a life-size silver game piece from the Lane Motor Museum that won the Meguiar’s People’s Choice Award. TV’s Chasing Classic Cars host and collector, Wayne Carini showed the Corvair Futura Waimea, one of three designs from Kaiser Aluminum that was made from three Corvairs. Besides its green interior, it had ‘63 Pontiac Bonneville stacked headlights, a single central driver’s seat, and two bench seats. 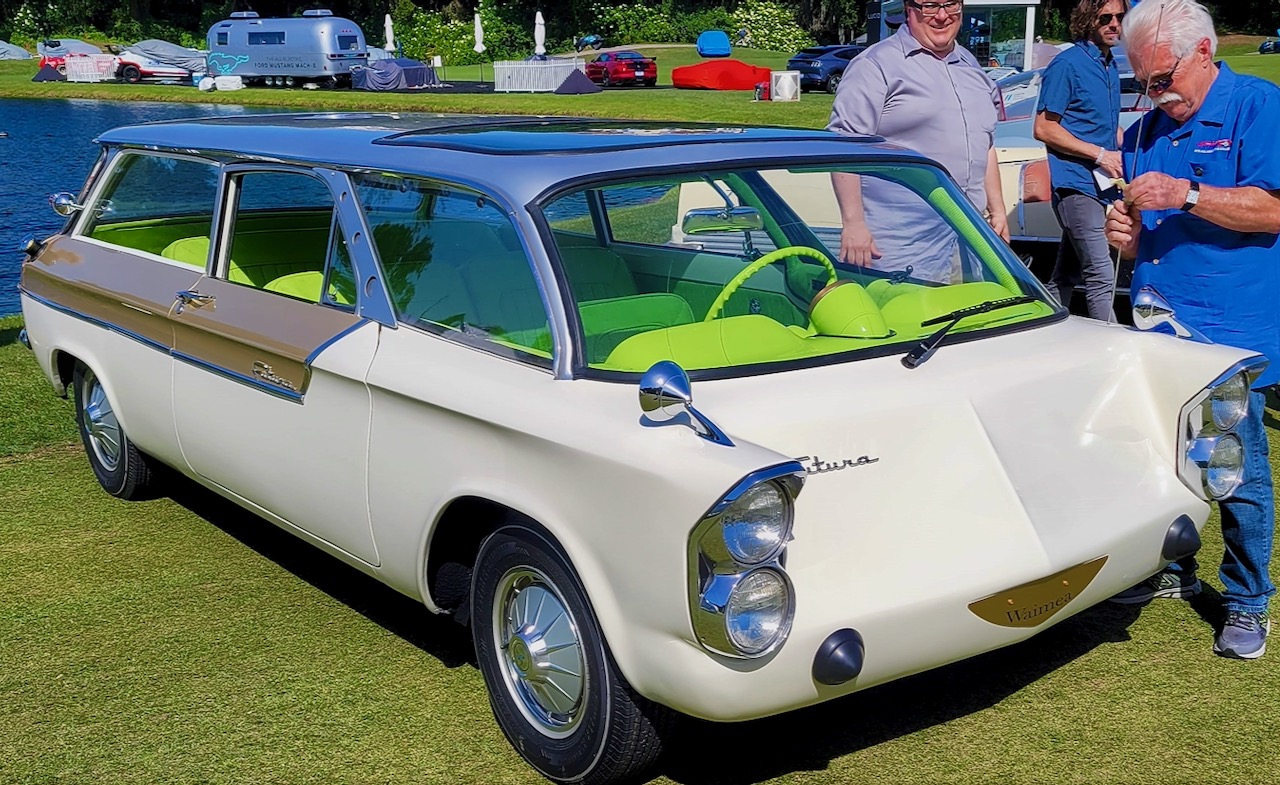 “It was a thought process of building a minivan, with a driver transporting people around in a small station wagon-type car,” Carini said. “One of the engineers at Kaiser ran with the idea because he knew the company wasn’t going to do it, and built it in his garage. It’s kind of funky and kind of weird, but we love weird cars.” 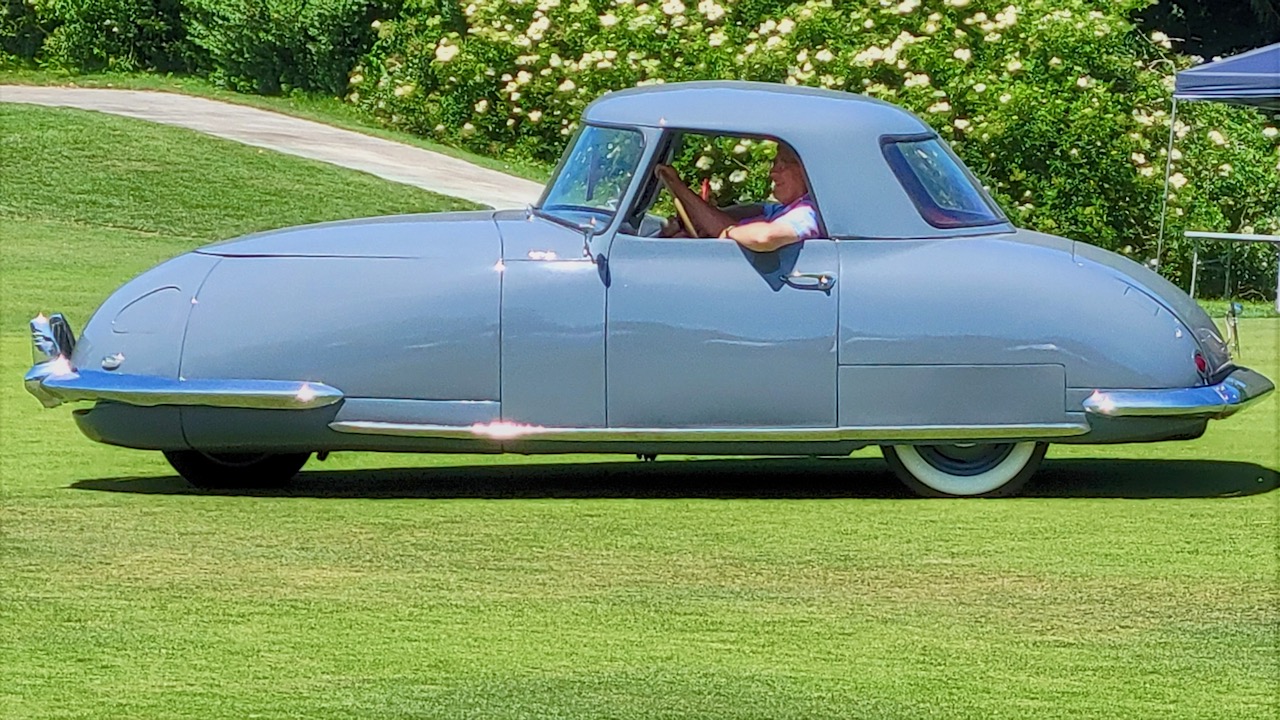 Myron Vernis brought his bullet-shaped, 3-wheeled ‘48 Davis Divan, one of only 16 ever made. Glenn Gordan Davis’s company went under when he was convicted of securities fraud. “They usually just smile,” Vernis said of people’s reaction to it. “It was the Tucker of the West Coast. … It was a great car and really cool, and it was designed by Frank Kurtis, who was a great racecar designer, and that’s why the three-wheel concept on this works.”

The It’s Electric Class, Best in Class winner was the grandest design – Mark Hyman’s ‘05 Columbia XXXV Open Drive Brougham, an elegant carriage that saw him drive it at one point from its high front seat in top hat. Geoff Hacker’s ‘54 Woodill Wildfire was back again. One of the stars in the 1964 film Johnny Dark – Next to it was Tom Chandler’s curvaceous and elegant two-tone blue ‘53 Maverick Sportster, one of seven built by Sterling Gladwin, who wanted a boulevard sports car. Under its neo-classic shape and long bonnet is a Cadillac V-8 and chassis. One of only three survivors, it won the Buddy Palumbo Award. “It is one man’s dream. He wanted to create a Southern California boulevard car for the rich and wealthy,” Chandler said. “It’s all Cadillac mechanical, very stock Cadillac… This is the only other one restored besides his prototype in California.” 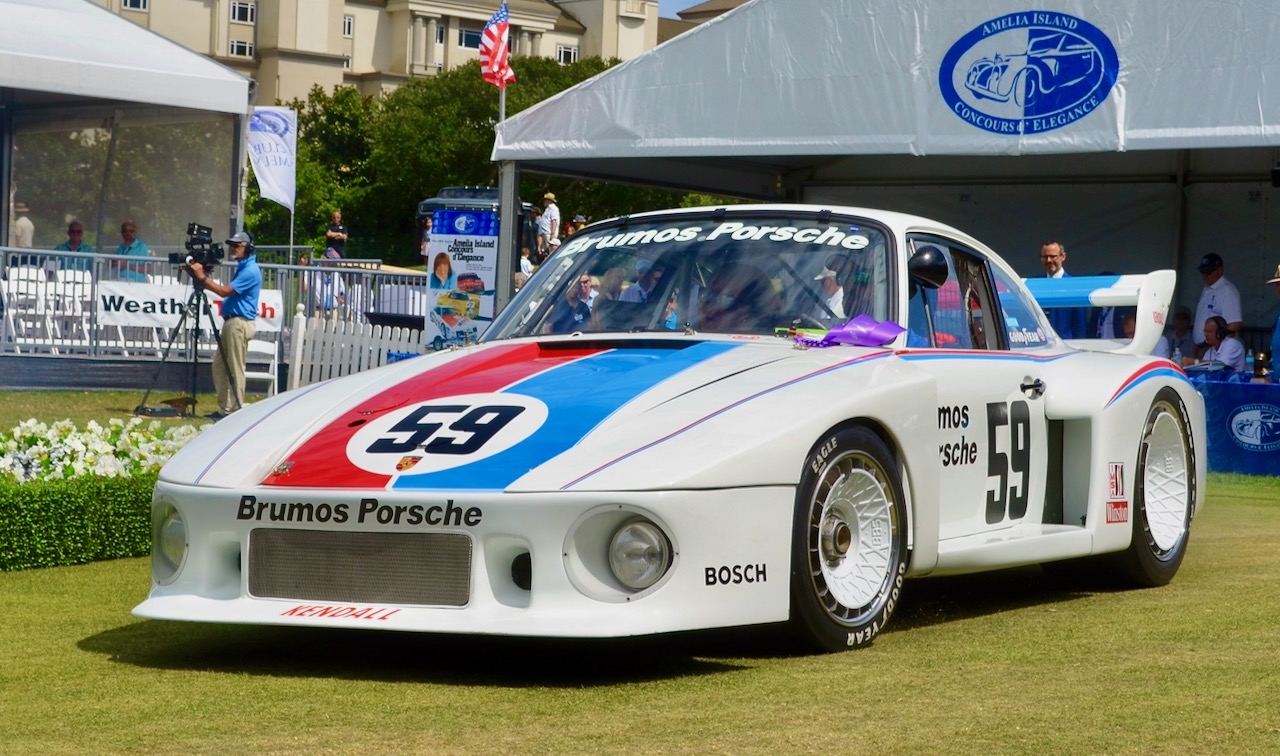 Sleek, winning muscle was represented by a class of a dozen Porsche 935 racers to show its winning ways from 1976 through the final victory in the 1984 12 Hours of Sebring. The Haberthur Meccarillos Cégécol Racing Team’s ‘78 24 Hours of Le Mans-winning Porsche 935 was there as well as the ‘79 Le Mans-winning Kremer K3. So was a local icon – The Brumos Collection’s ‘79 Brumos Racing 935 that won eight races and the title with the late Peter Gregg.There was also a ‘20 Porsche 935-19, one of 77 modern reinterpretations of the iconic original, based on the 991 GT2 RS and built for track use only. 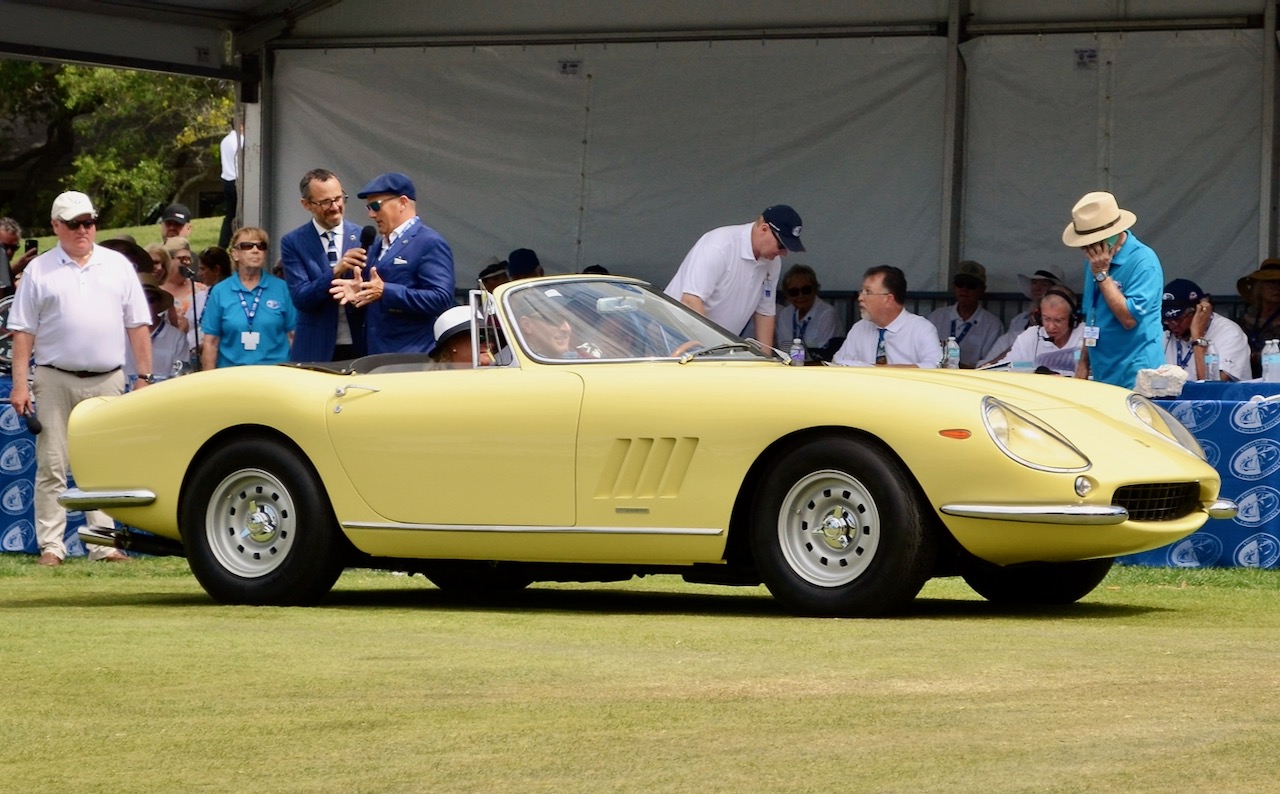 A prime waterfront site at the back of the show was reserved for what some consider the most exotic and alluring Ferraris ever – the 275 GTB/4. With a 3.3-liter Colombo V-12 and 300 horsepower, it was the first Ferrari road car with a five-speed gearbox between the rear wheels, plus fully independent double wishbone rear suspension. Best in Class was Swap Shop Racing’s 275 GTB/C (C for Competizione) Berlinetta Speciale with 330 horsepower and a 300-pound diet. The Denise McCluggage Trophy for the most historically significant postwar racecar went to Fratelli Auriana’s ‘67 Ferrari Alloy NART Spyder, above, that also appeared with Steve McQueen in 1968’s The Thomas Crown Affair. 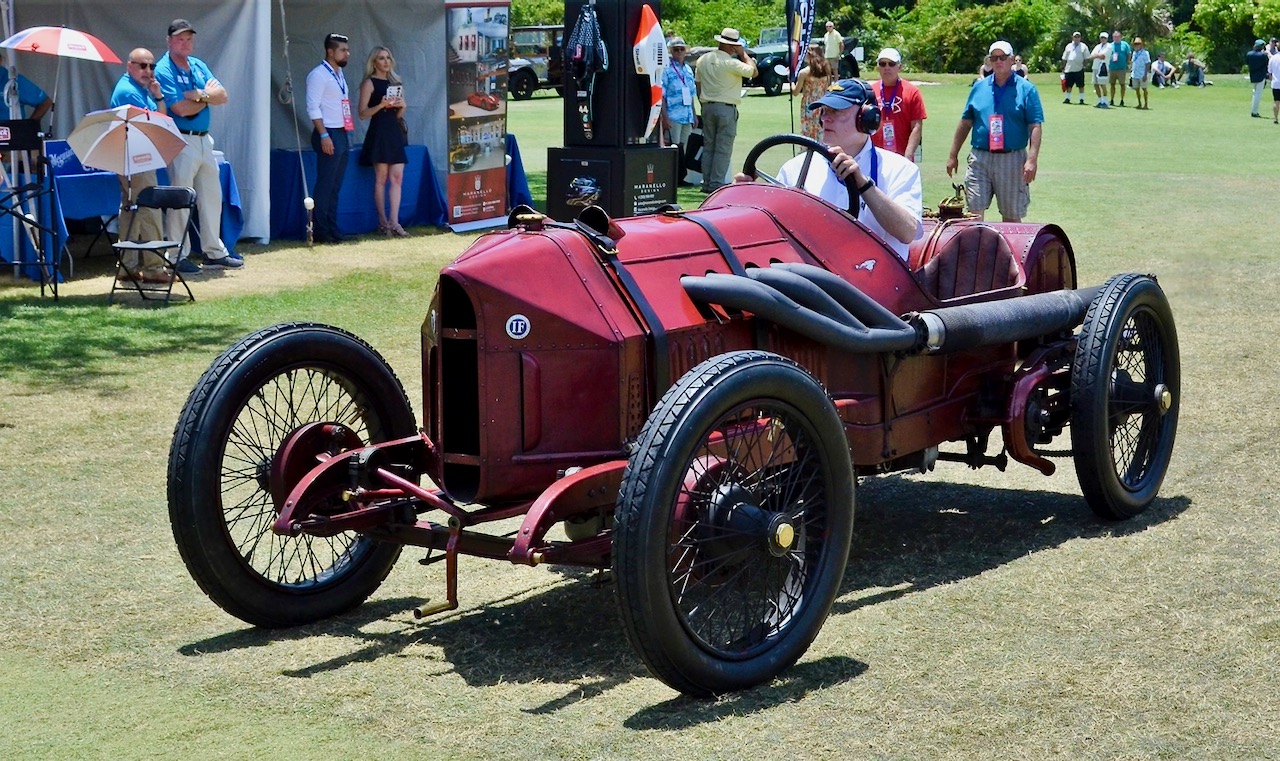 Another Italian that looked brutally beautiful was Rob Dyson’s unrestored ‘13 Isotta-Fraschini Tipo IM, with a huge 135-horsepower, 7.2-liter inline 4-cylinder engine with a single Zenith updraft carburetor. It was the factory entry in 1913’s Indianapolis 500 with Teddy Tetzlaff at the wheel, and raced the next year as well. It didn’t finish either. It was converted to street use briefly, before its owner died in 1918. Stored for 39 years, then gently preserved, it retains a nicely patinated look and its thunderous sound, Dyson wearing ear protection when he drove it.

“They built four and this is the only one left,” Dyson said. “… It’s probably the best preserved and complete pre-war Indy racecar in existence. It actually drives pretty well. You better wear goggles because the front wheels really kick up a lot of dust and dirt.” It won Best in Class – Race Cars Pre-War.

The Amelia Island Concours has raised more than $3.75 million for Community Hospice of Northeast Florida, Spina Bifida of Jacksonville and other charities since it began. For more information about the Concours, next year’s dates and a complete list of 2021 awards, please visit https://www.ameliaconcours.org/