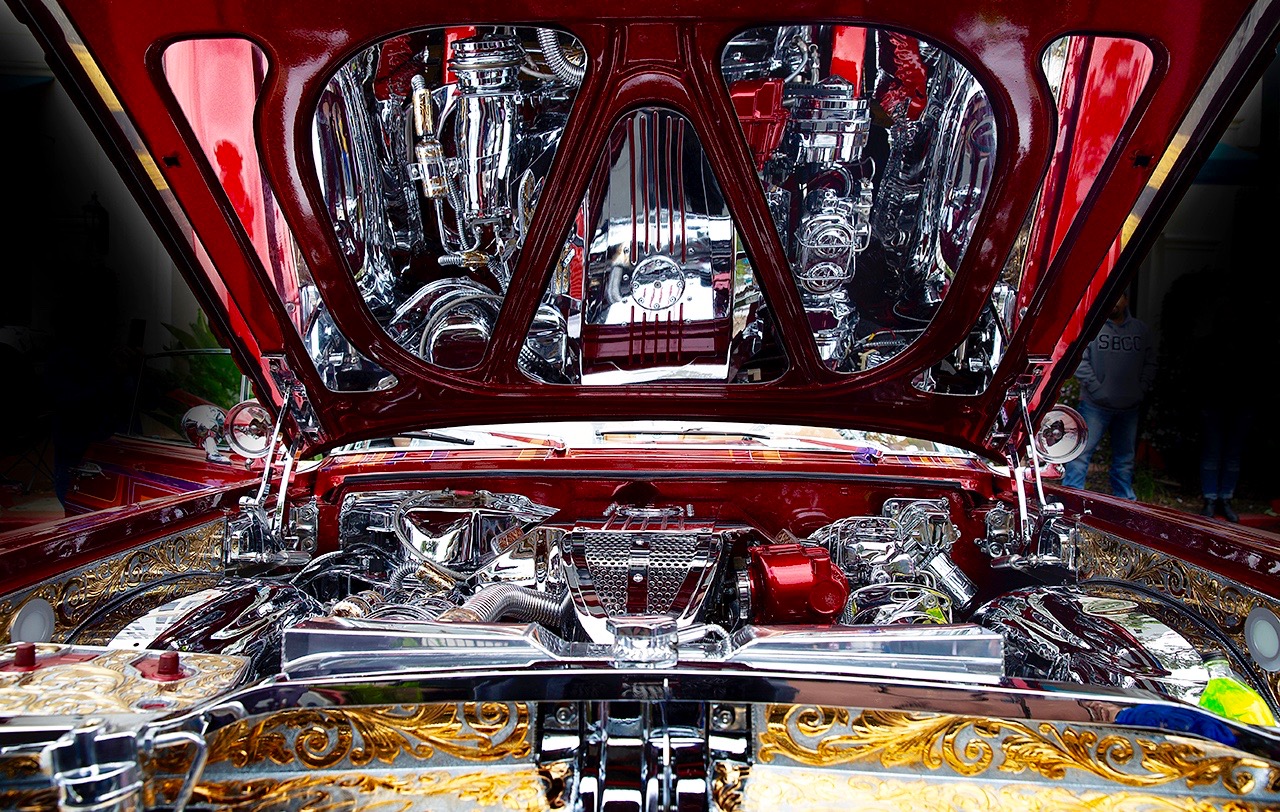 It was raining as I motored south on Hwy 101, heading to Santa Barbara and the State Street Nationals Car Show. Promoters had promised over 300 cars this year, the 20th since California car guys starting showing their hot rods, classics, sports and exotics on this famed central artery of the city they call Paradise. I parked at the North end of the 10 block State Street strip designated for the show, left my rain gear in my truck and reminded myself that it never rains in California!

On the first block where there should have been 30 cars there were three. But it was early. As I walked further south, the rain tapered-off and the show cars appeared – along with a swell of happy attendees. We had a car show– and it was a great one – in SANTA BARBARA: STREETS OF PARADISE! 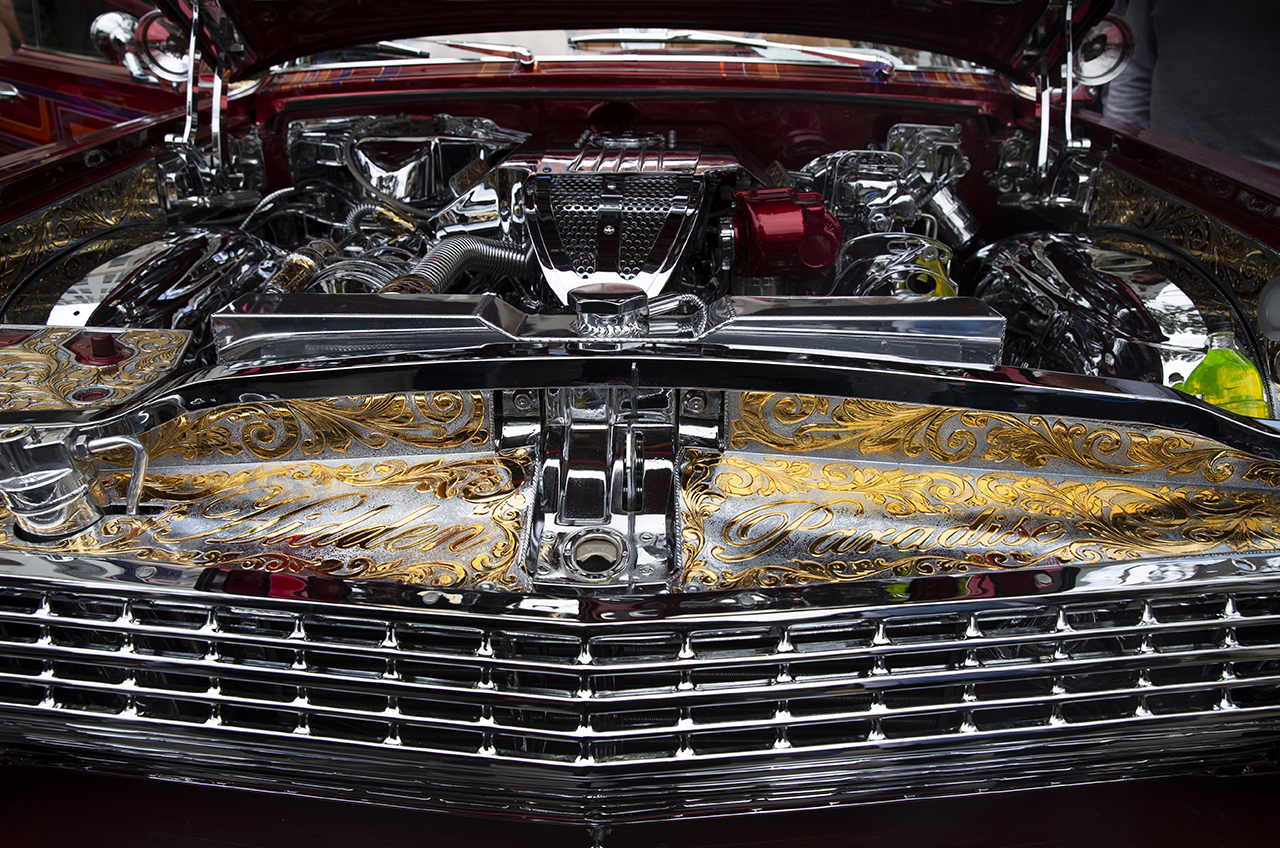 Hidden Paradise, Juan Montero’s richly engraved, chromed and metalflaked ’63 Chevy Impala, top & above, was the perfect car to represent the passion and artistry of car guy culture – in undeniable evidence – at the Santa Barbara State Street Nationals. Every inch of the Montero Impala was painstakingly honored and embellished. I can’t imagine the hours and the investment required to create a Low-Rider gem like this – but I’m sure glad there are masterful artisans out there exhibiting their automotive art. 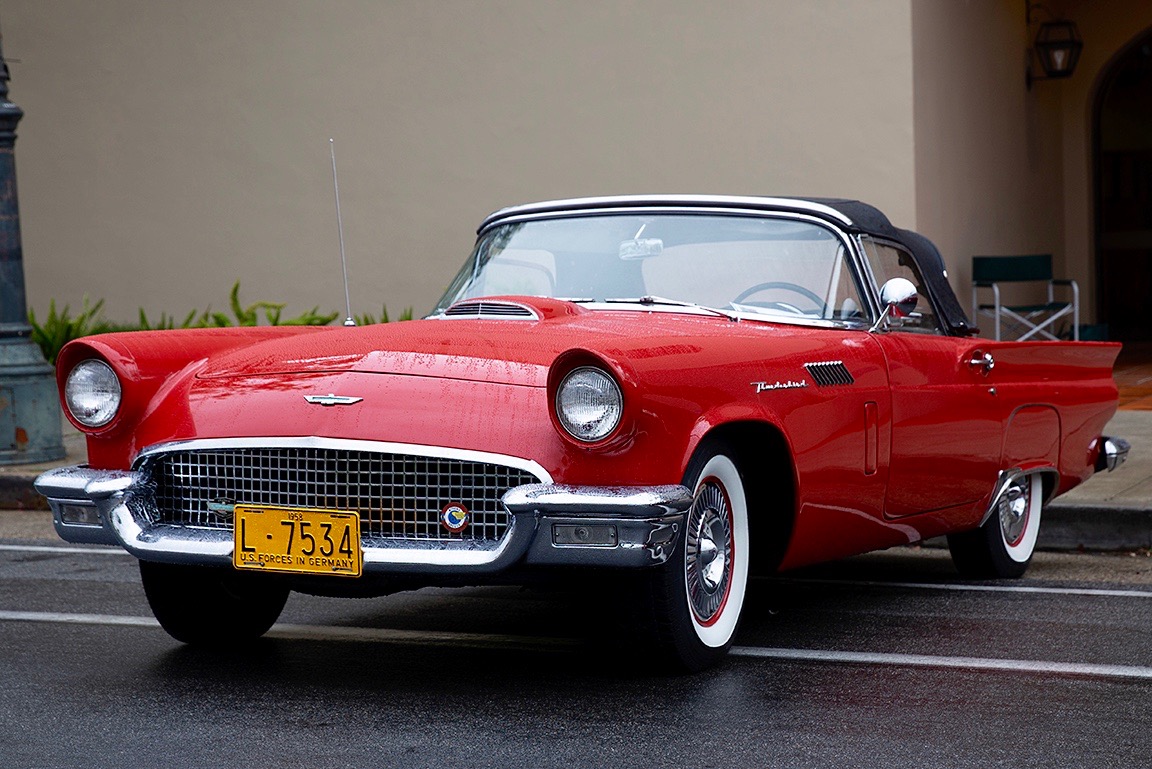 This dewy ‘57 T-Bird was one of the three cars I encountered on the first show block as the rain was fading and the event was coming alive. T-Birds are nothing new to car shows, but there was something special about Robert Burtness’ Mandarin Orange ’57. Then I noticed it: the 1958 U.S. Forces in Germany license plate. 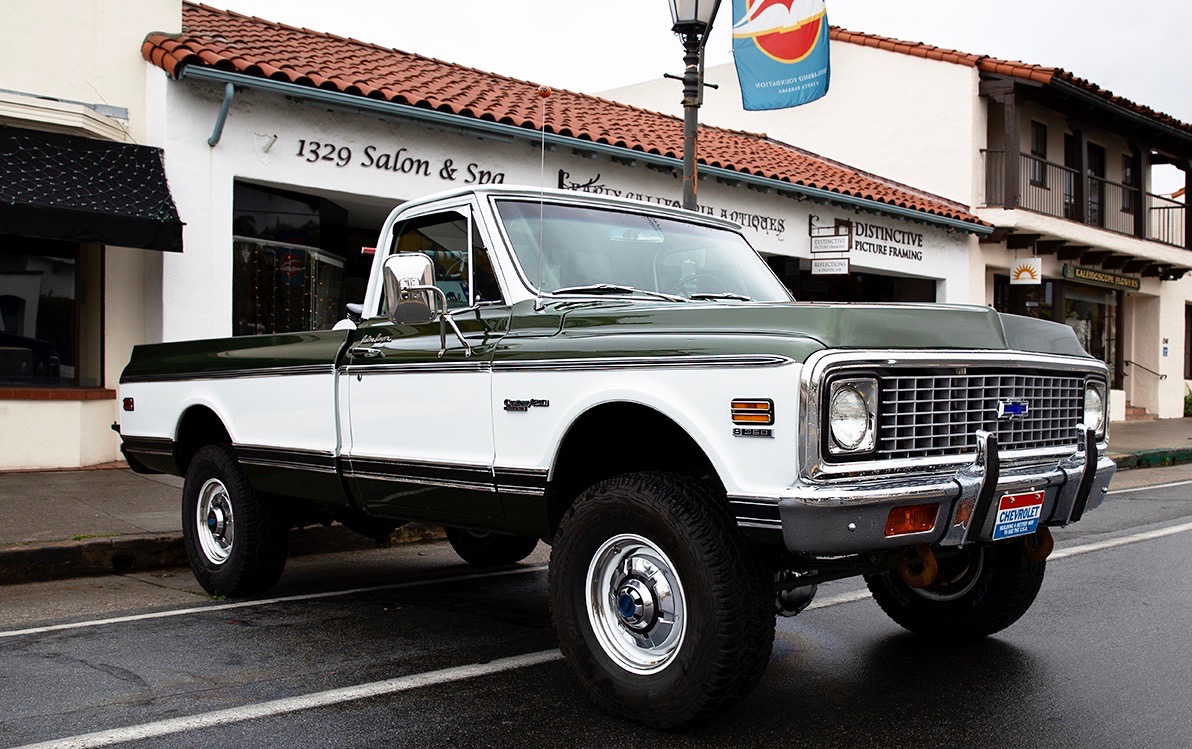 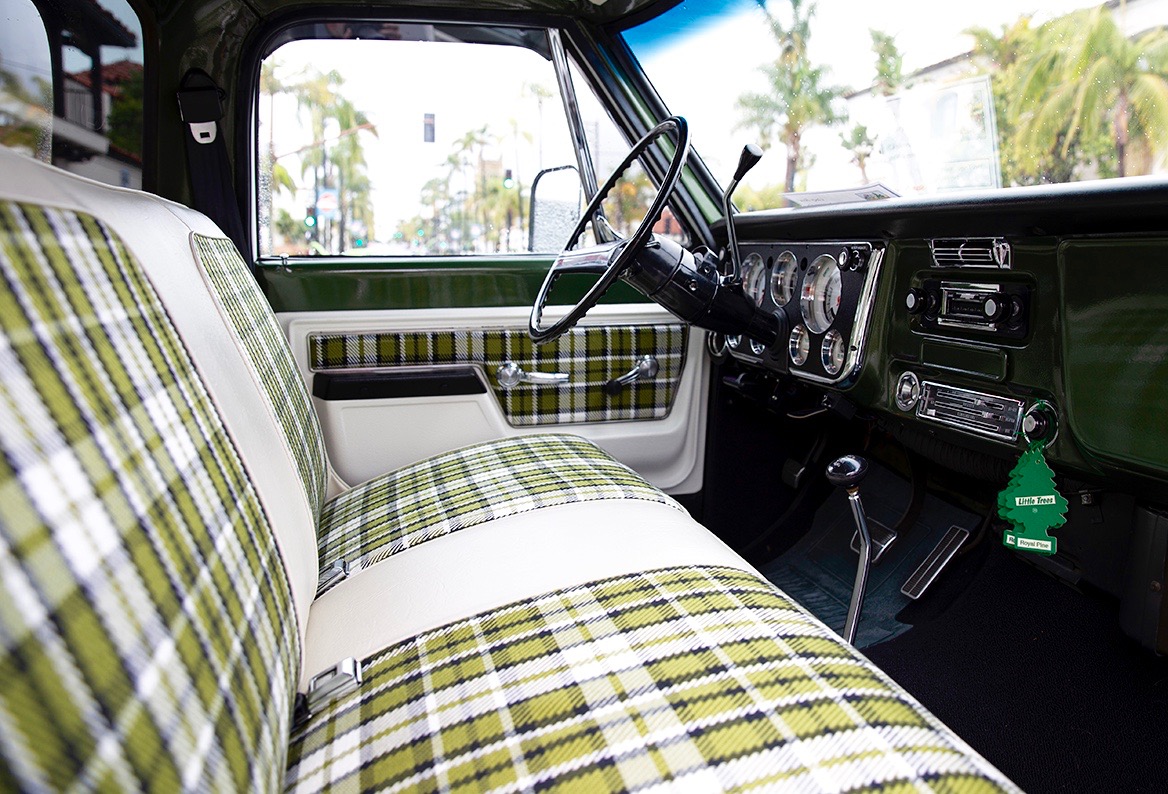 Casey Bond’s showroom fresh ’72 Chevrolet K20 pickup truck was a standout on State Street. This Custom Deluxe K20 is a full-size on-road, off-road workhorse with manners and style. It’s tagged on its doors with a Custom Camper nameplate and no doubt, many of these Fleetsides were topped with custom truck bed campers. One of the options for the Chevy K20 was the Highlander luxury tartan upholstery with parchment colored vinyl seat trim. Casey’s truck also has the optional Turbo Hydra-Matic transmission, power steering, Comfort-tilt steering wheel and air conditioning. Demand for 1970s vintage American pickups continues to grow. 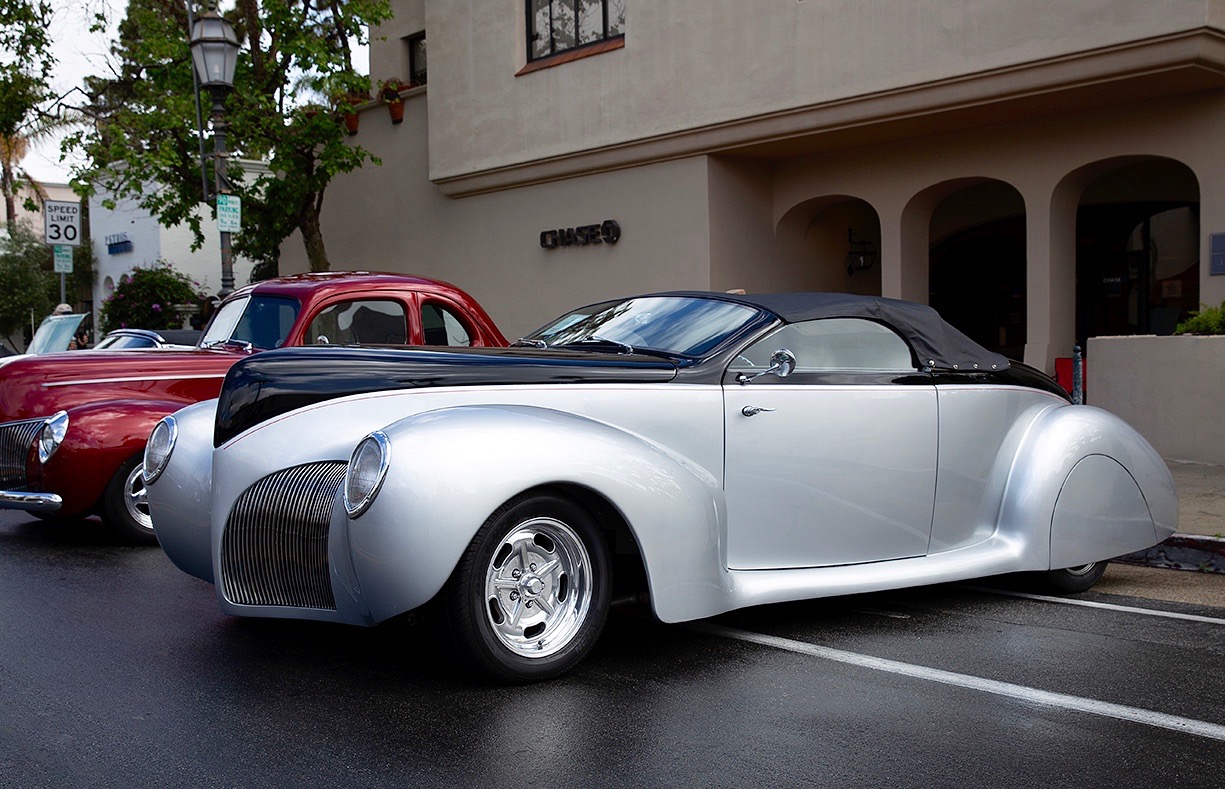 The ‘39 Lincoln Zephyr was low, raked and streamlined – right from the factory. But that was then and this is lower-longer-faster now. It’s not a stretch of the imagination that Curtis McCue’s silver Zephyr custom was previously owned by a rock star; she’s in rhythmic harmony just sitting still! 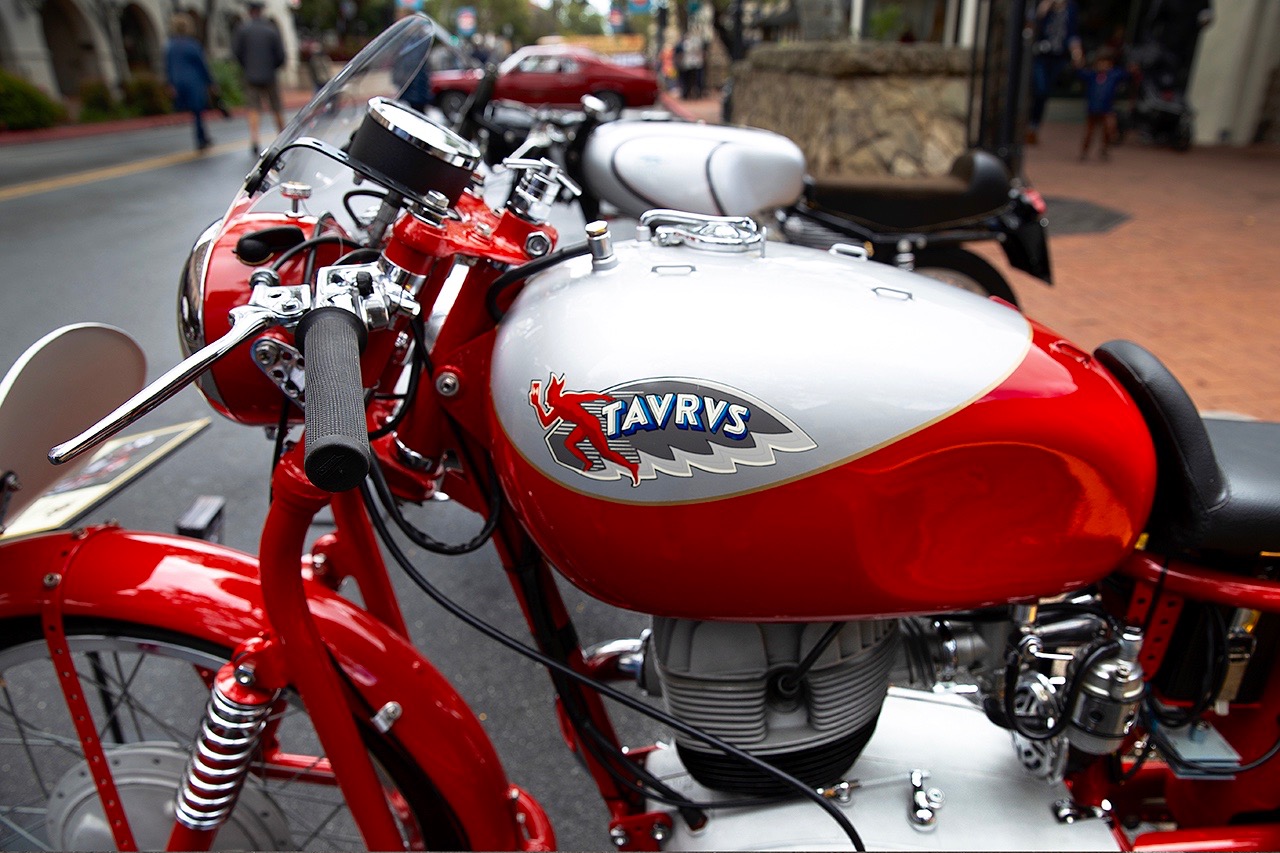 There were only four motorcycles on display at the show. But they were extra-special. This ‘56 Taurus is a one-off, 200-cc SS machine, custom built for the famous Milano-Taranto road race in Italy. It was one of two rare motorcycles trailered to Santa Barbara from the Moto Talbott Collection in Carmel Valley, CA. 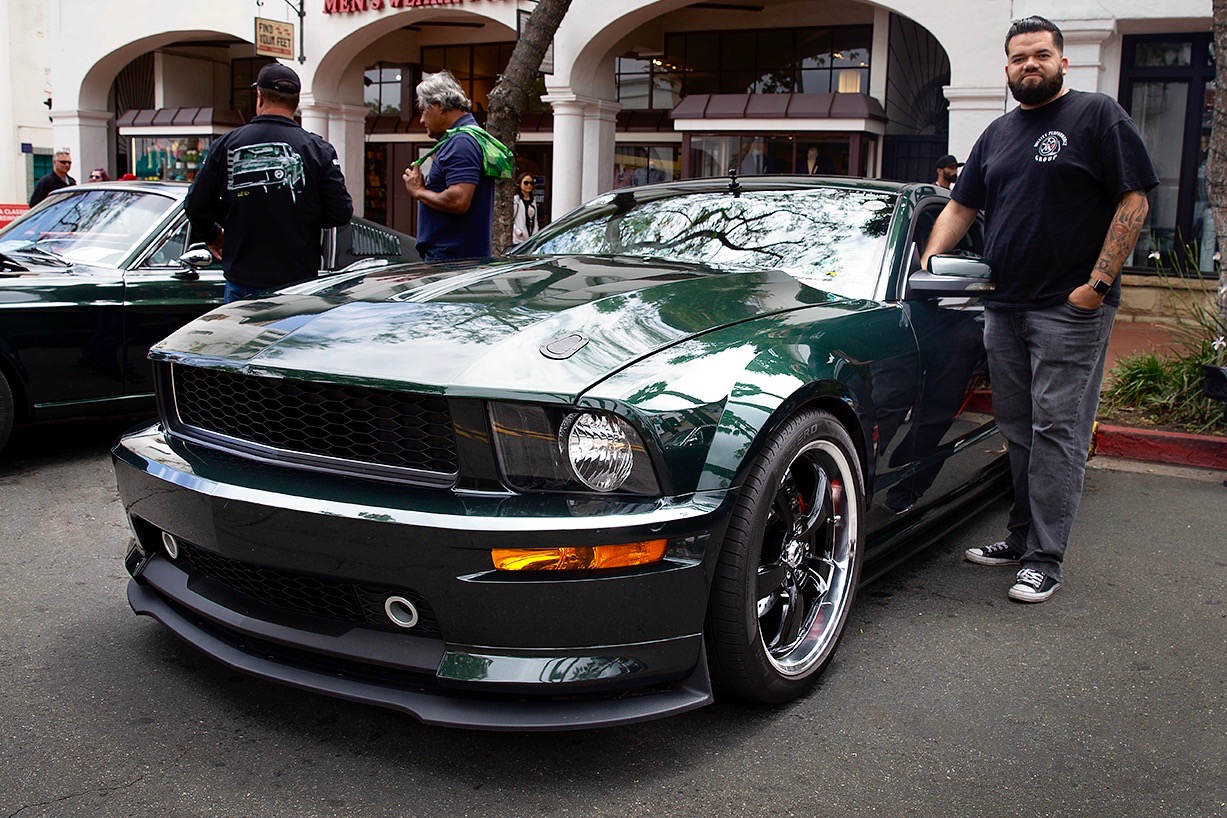 I love talking to the new generation of car guys – like Rigmar Morales of the Bullitt Performance Group – who drove his track-day-modified ‘08 Bullitt Mustang up from Long Beach, CA. You know this Bullitt hits the “Awesome” target, as it was a 2014 SEMA Booth Car. Plus Henry Ford III, Chad, Steven, Chase and Madison McQueen and Simone Shelby signed its glove box. 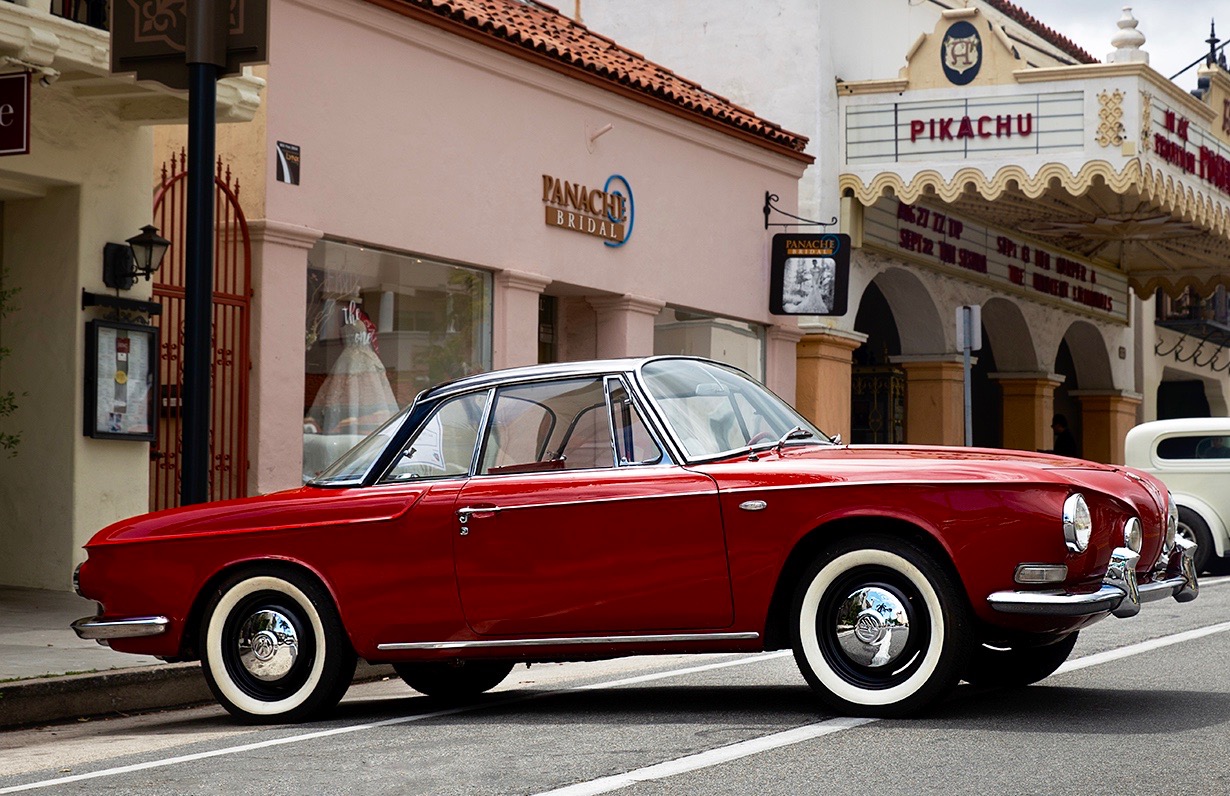 Sometimes it’s the little things that make a big impression – like this ‘63 VW Karmann Ghia owned by Bruce Hoel of Los Angeles. I tend to shoot and navigate car shows at a steady pace, so it wasn’t until I began editing my photos that I noticed another ‘little big thing’ in this picture. Can you spot it? Send us your guess via the comment window below. 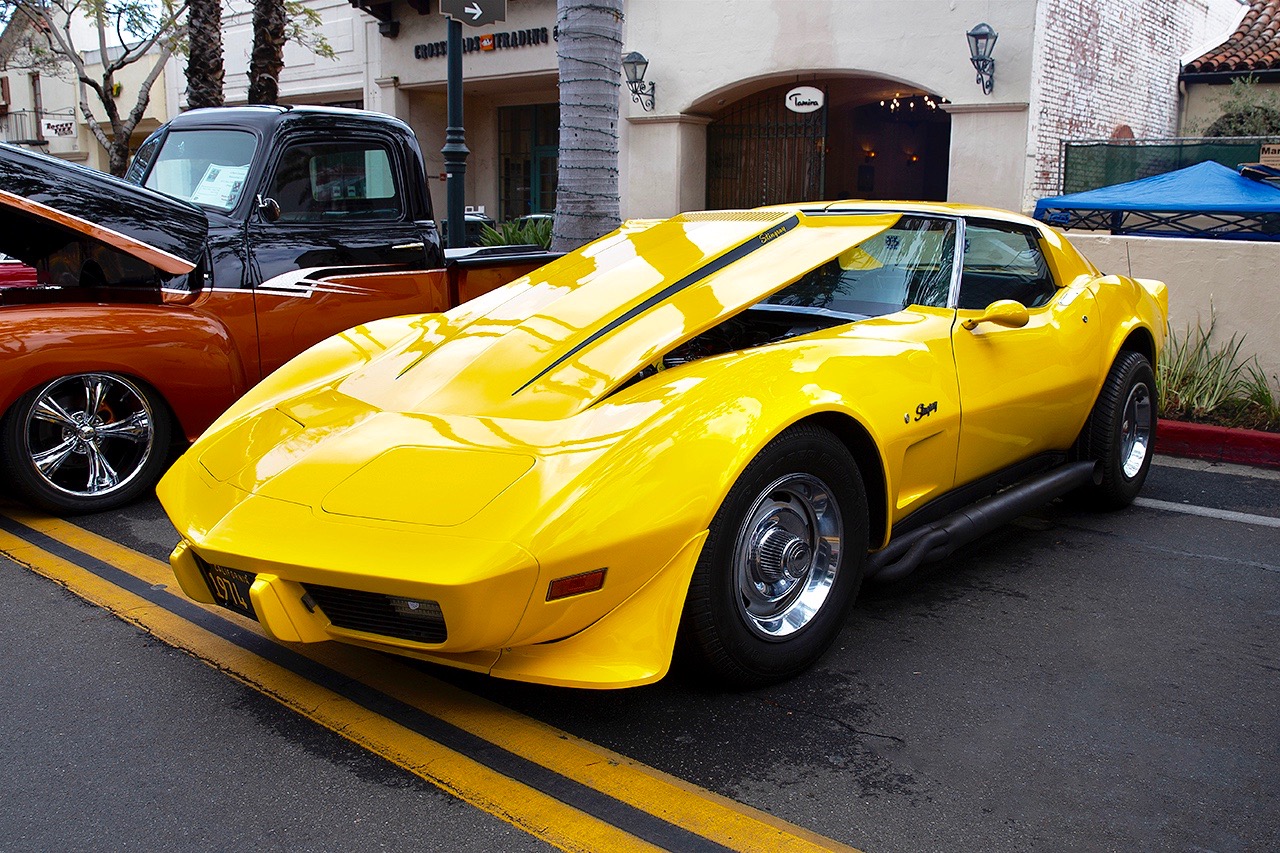 You want attention? Drive a Corvette. Not enough attention? Drive a Yello! C3 Corvette like this side-piped ’74 Stingray owned by Christian Stewart of Bakersfield, CA. There are volumes written about the pros and cons of C3 Generation Corvettes. This is an awesome C3 example. 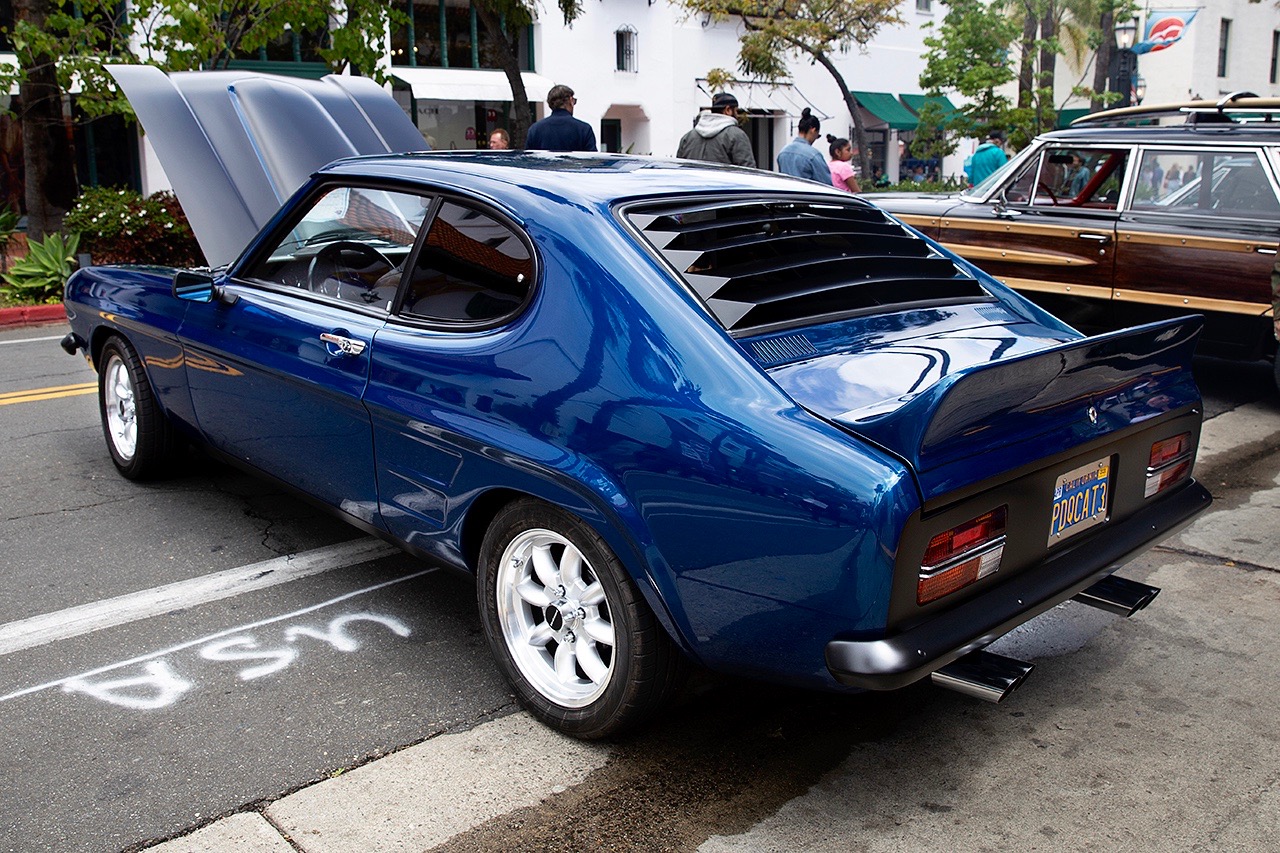 If you’ve been watching any of the Brit Boys on Motortrend TV lately you’ve probably picked up on their interest in European market Ford Escorts. Here, on the other side of the pond, those of us lacking deep pockets for a serious American muscle car may have to compromise by convincing their frugal uncle to part with his affordable Mercury Capri! With some imagination, performance parts and wrench skills you just might be able to build yourself something as cool and worthy as car gal Raylene Senke’s racy & righteous ‘73 Mercury Capri. 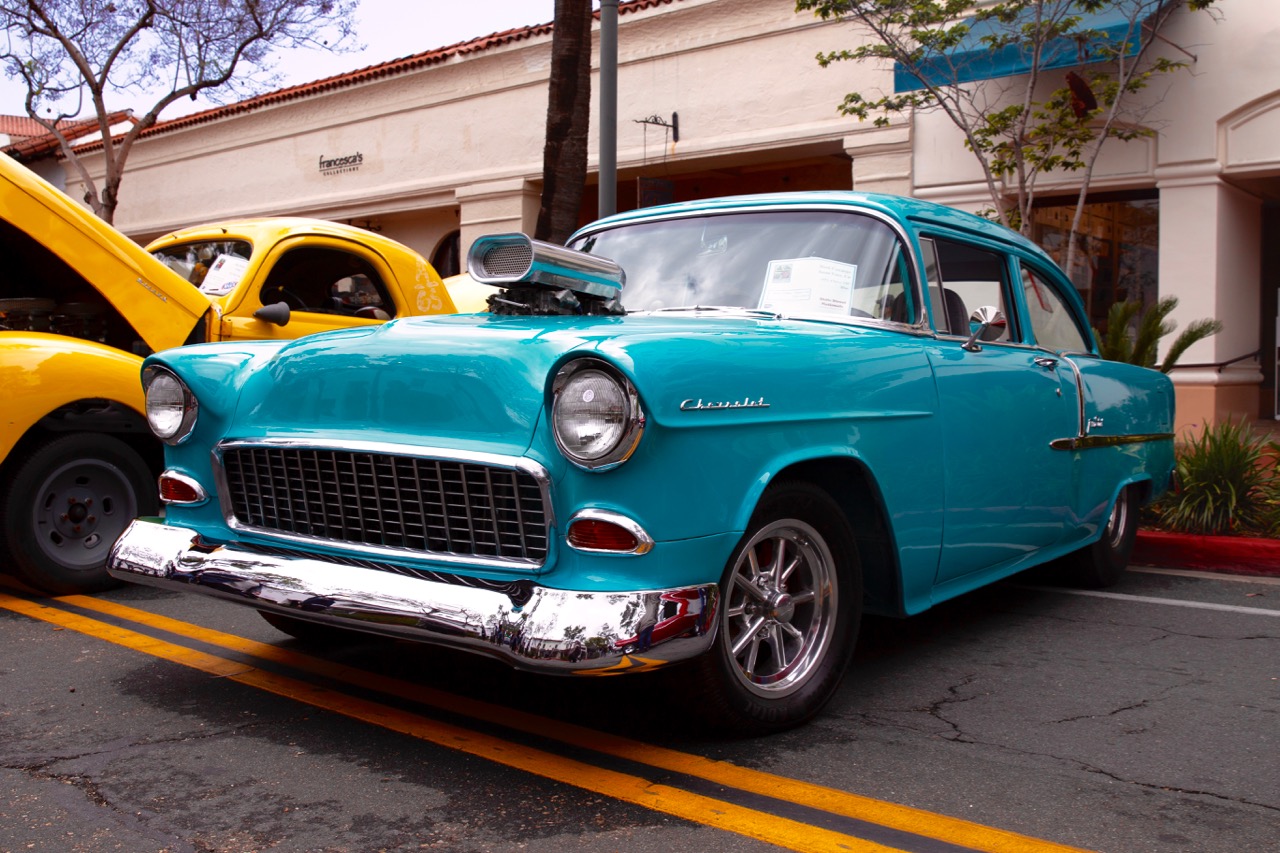 Hank Carraljo is a Valley neighbor and a consummate car guy. He’s just added another wicked machine to his “Fast, Loud, Tubbed & Blown” collection – this ‘Wanna Race?’ Pro Street ‘55 Chevy 210 Post. What’s that sticking up out of the hood you ask? Why that’s a tall & blown 468 BB. 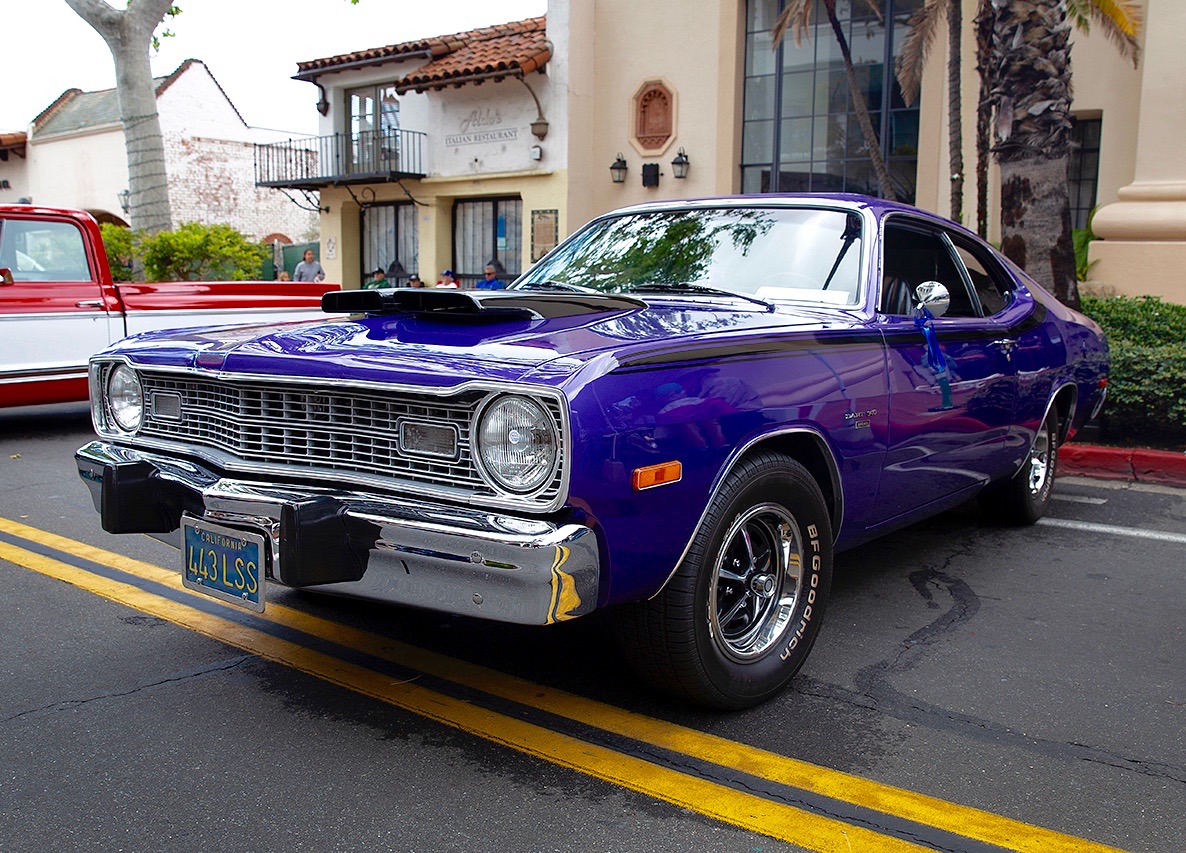 Is it me, or is there something Pursuit-Vehicle-ish about Roger Lane’s menacing looking ’73 Dodge Dart Sport 340? Maybe it’s those bad-boy bumper extenders, the laser-beam-emitter hood scoop or the Plum Crazy paint job? It is one cool ride. 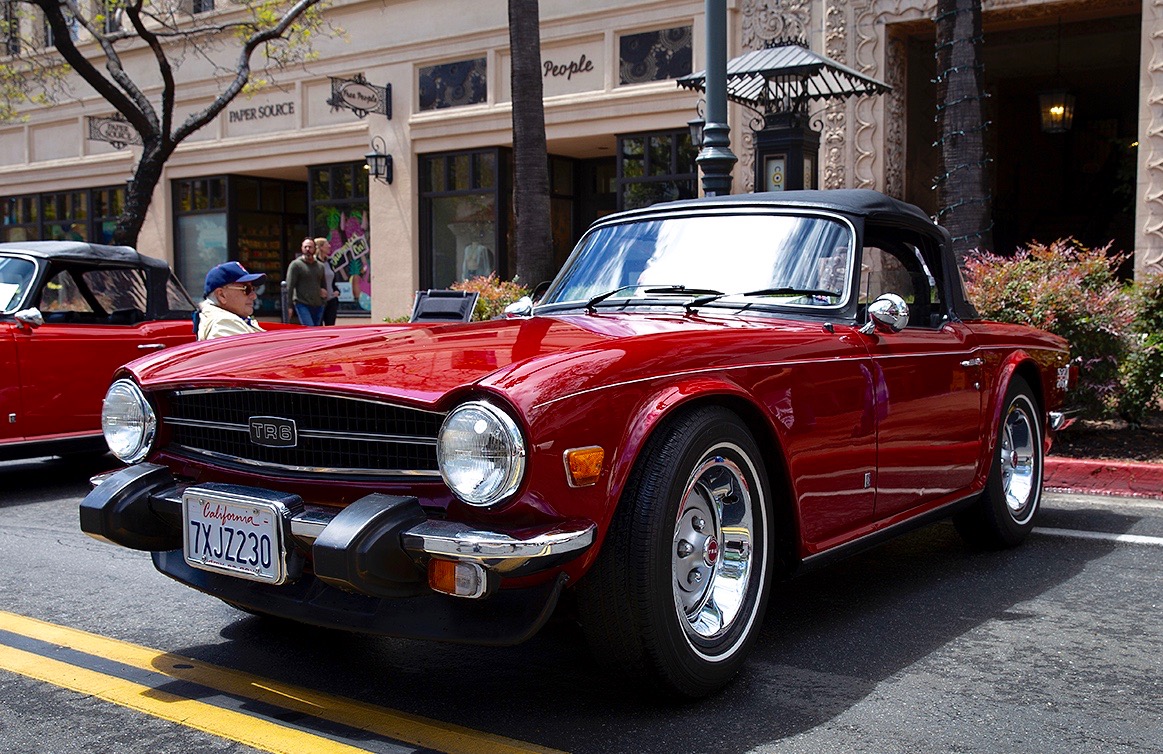 DISCLOSURE: I own a ‘74 Triumph TR6. Any information or opinions stated in this caption will be objective and truthful. What a bitchin’ car!!! Seriously, Ronald Root’s maroon ‘74 Triumph TR6 is a gem. Everything is clean and correct. In that his other collector car is an Aston Martin Vantage speaks volumes about the appeal of this leaky-Brit roadster. The show had a strong turnout from the Central Coast British Car Club, of which Ron is a member. 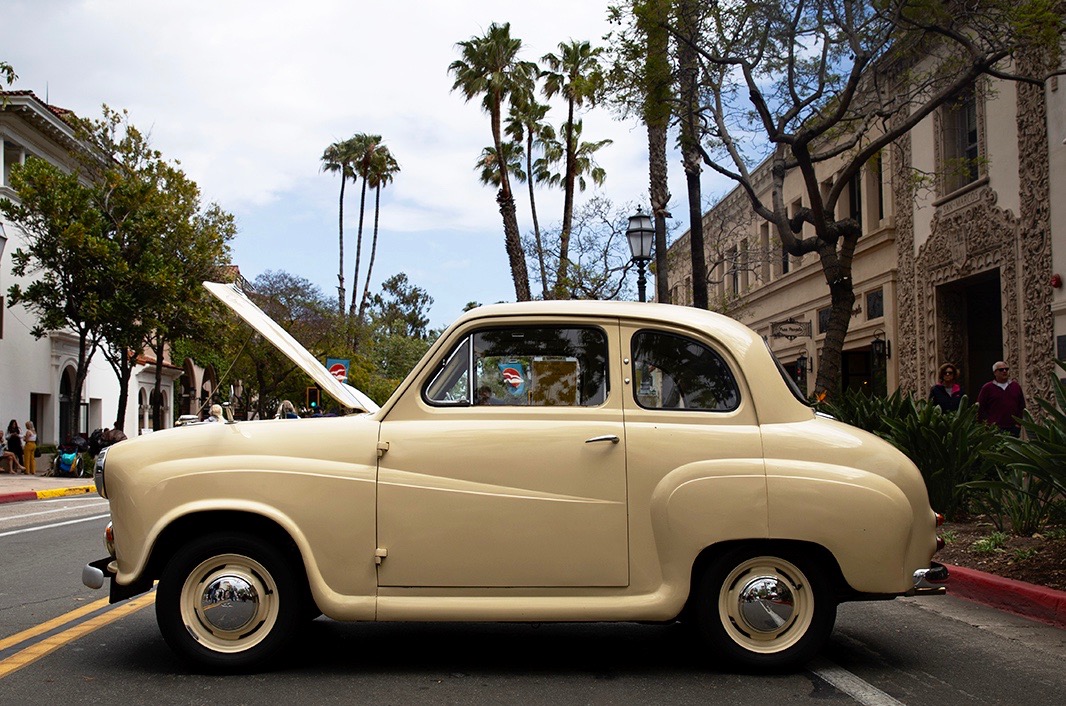 WARNING: Objects in this photo may appear bigger than they actually are! So this was one of the three cool cars I first encountered when I started my day in a light rain. The streets are now dry, the crowds slimming. And she – a ‘58 Austin of England A35 – is still dutifully alert and ready. Thank you, Bryon Brill, for bringing her to the show. And Thank you guys for checking things out here at CarGuyChronicles. Come back soon.