Skip to content
If we actually did eliminate all danger from auto racing, would we really like what was left, blogs Stephen Cox? 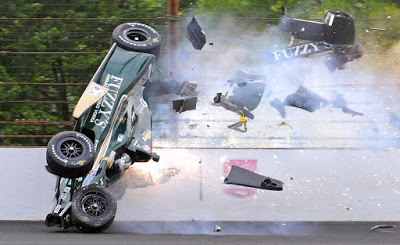 Ed Carpenter, 2015, IMS
I began driving racecars in 1985. In the thirty years since, I’ve had a total of one serious neck injury while racing. It was at Plymouth Speedway in the summer of 1995. I have not had another neck injury since. It is true that this injury has had lasting effects that I would be pleased to live without. It is not my intent to minimize the severity of neck injuries. They are not fun.

However, they are not nearly as common as some would like us to believe. As amateur road racing champion Anatoly Arutunoff told me a while back, “The HANS device is a good solution to a very, very… very small problem.” Fact is, serious neck injuries are a relatively rare occurrence. 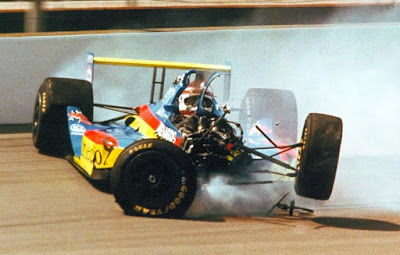 Nelson Piquet, Indycar Nationals, 1992
Likewise, following the death of Justin Wilson at Pocono last August, one would watch the public reaction and think that racing Indycars is a dangerous and potentially fatal enterprise. In fact, only four drivers have lost their lives racing Indycars this century. Compare that to the five people who died in the first weekend of auto racing at the Indianapolis Motor Speedway in August of 1909 and it becomes apparent that the sport has shown immense progress in safety over the course of its history.

But all of this safety has brought us to an interesting junction. We are approaching the point where auto racing has become so tame that the concern for physical safety is no longer a limiting factor for the driver. “I better slow down or I might get killed” is simply not a thought generally entertained by even the fastest racing drivers.

That is a drastic change in the character of the sport. Formula 1 legend Stirling Moss said in a recent interview, “I remember going to Porto in Portugal with these really fast sweeping curves screwing down a hill with trees on the side. And when you’re going through there it’s difficult not to think ‘If a wheel comes off, I’m going to get killed here.’ That’s a very daunting thought.” 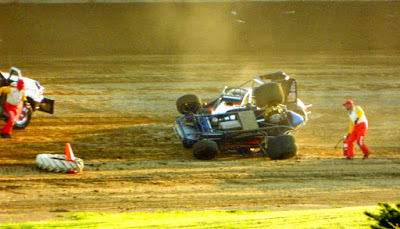 USAC, Lawrenceburg Speedway
But that thought rarely occurs to today’s drivers. Instead of personal safety, the limiting factor for modern drivers is crashing the car and tearing up equipment. This vacuum of imminent physical danger allows less skilled participants to drive beyond their abilities with minimal physical risks.

As a result, one could make the argument that the sport’s obsession with safety has in some cases actually created a new form of danger unknown to drivers of previous eras. I’m not sure it’s a winning argument, but the fact that it can be made at all is perhaps its own lesson.

Now don’t get me wrong. I’m all for safety: Helmet, triple-layer Nomex, neck restraint… I wear every gadget they make. But from a broad perspective, racing just isn’t very dangerous anymore. And, that’s a good thing!

Stephen Cox is a racer and co-host of TV coverage of Mecum Auctions (NBCSN), sponsored by:
http://www.boschett-timepieces.com/    http://www.mcgunegillengines.com/