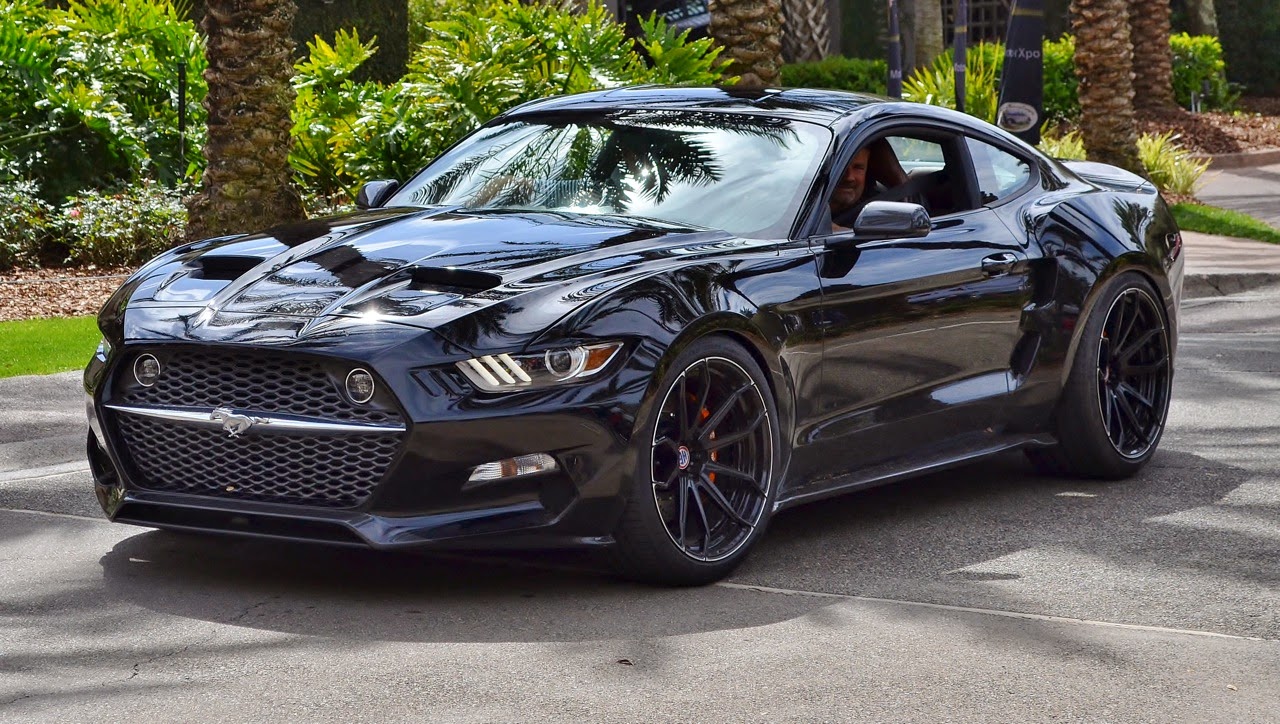 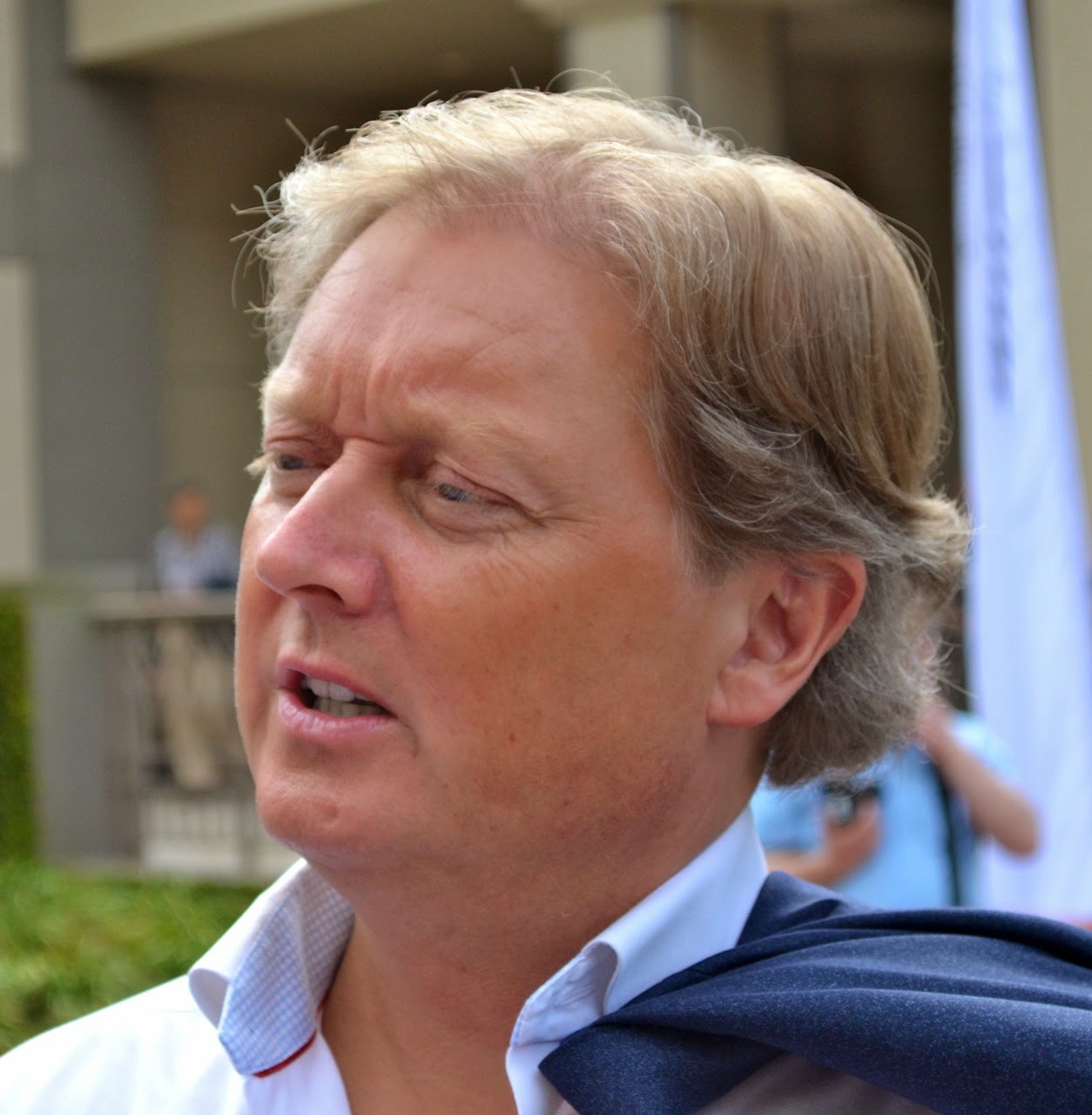 As Ford was teasing the sixth-generation Mustang, Fisker was thinking of how to give it more “pure emotion,” he said. The result is the Galpin Fisker Rocket – Galpin Auto Sports, Henrik Fisker and an apt name for a 725-horsepower Ponycar. They unveiled it at the Los Angeles Auto Show: a low-volume carbon fiber-bodied super-Mustang. Then I became one of the first to drive production model No. 1 at its premiere at the 20th annual Amelia Island Concours d’Elegance.

Fisker designed the BMW Z8, coachbuilt Tramonto and Latigo CS (a rebodied Mercedes-Benz SL and BMW 6-Series), Aston Martin DB9 and V8 Vantage, luxury plug-in hybrid Fisker Karma and Aston Martin Thunderbolt, also revealed at Amelia.
Galpin Auto Sports is part of a 69-year-old automotive empire in California that includes multiple dealerships as well a Van Nuys-based customizing and personalizing service. Galpin’s President Beau Boeckmann said the Mustang has been his favorite car for most of his life. He said he thinks Ford’s design team “nailed it” with the 2015 model, but he wanted to do
something really special with it. 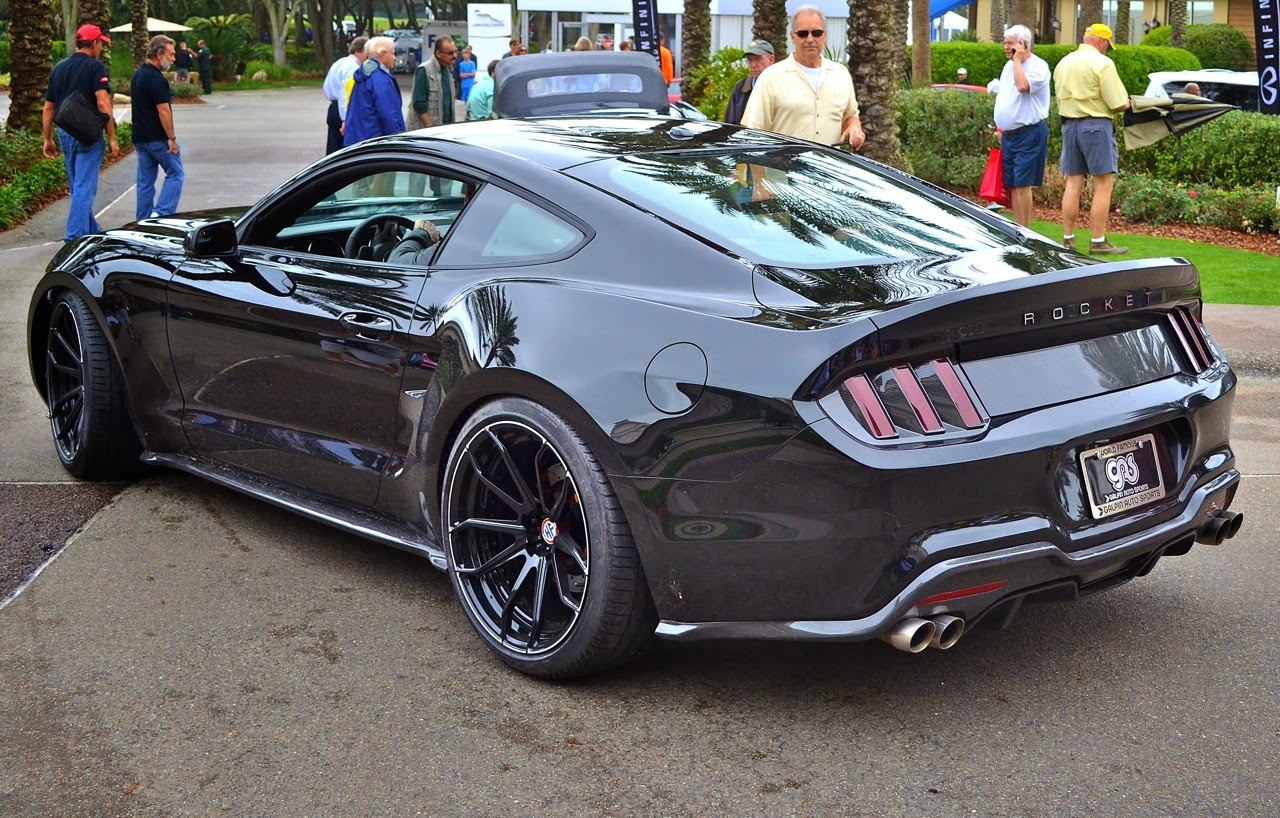 When Fisker was design director for Aston Martin from 2001 to 2005, Ford owned it. He and Boeckmann first crossed paths because Boeckmann was an Aston dealer. Fisker said he has always loved American muscle cars and told himself that some day, “I’ve got to do a Mustang.” Fast forward to August, when Fisker approached Boeckmann with sketches.

He started with photos of the new Mustang and did drawings. They secured a 2015 Mustang in October and scanned it, then overlaid his design on top of it, making sure the crush and bumper points were preserved. The Rocket design was modeled full-size in clay in a week because “I need to see it” – seven weeks start to finish. 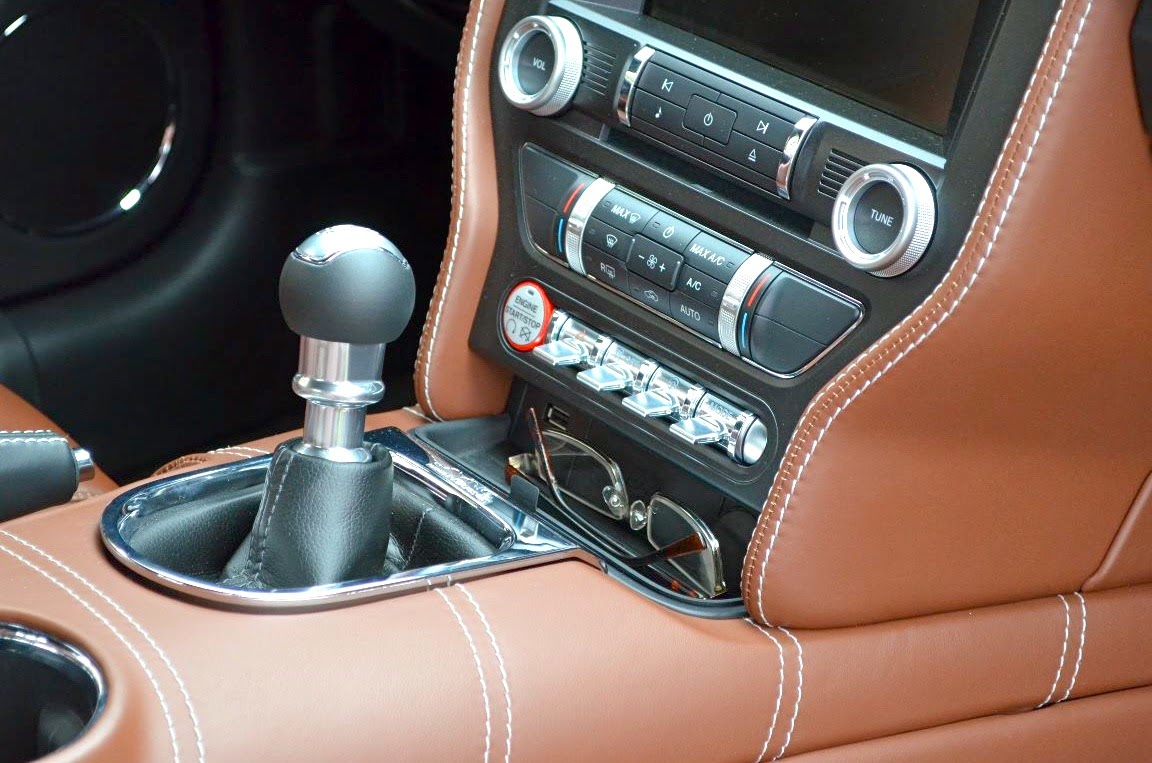 One look at the Rocket and you see recognizable Mustang, obviously inspired by some of the hottest vintage Shelby GT500s. Then realize that all bar the roof and glass is new, done in carbon fiber crafted by GFMI Metalcrafters.

The Ford grille is there, but a longer and wide-open hexagon shape filled with a carbon fiber mesh. It’s split by a polished aluminum blade with running horse in the middle, like a 1960s Mustang, and two high corner fog lights. There’s a prominent lower air dam with intake.
“The nose is a little longer to kind of drag it down and give it a more aggressive look,” Fisker said. “You want to show the muscle; you want to show the power with the power dome and all the intakes.” 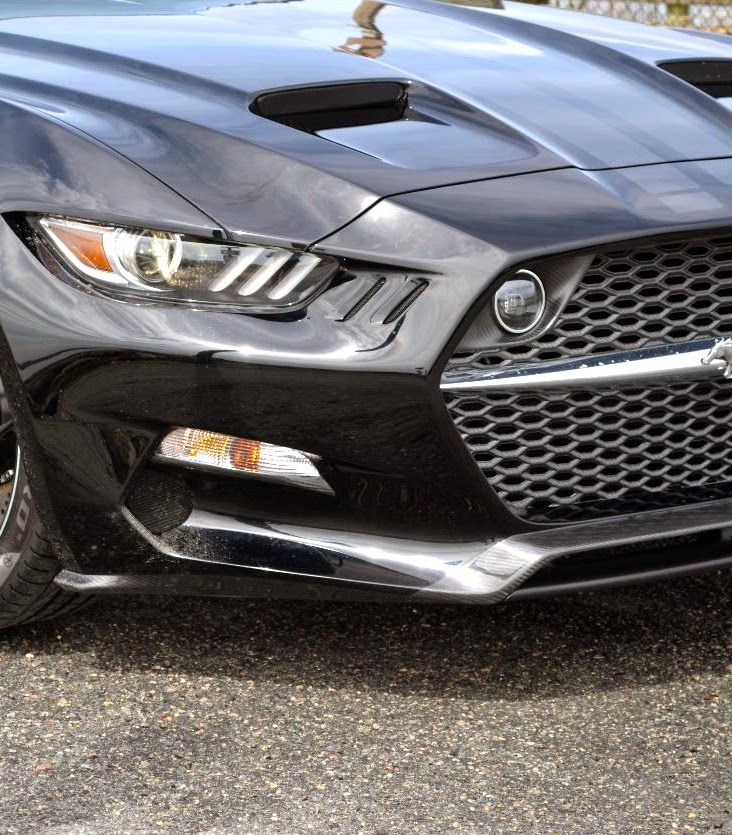 The Mustang’s glaring headlights with three-bar running lights remain, but with a hood that flows into the nose along with two functional slits. The hood also gets carbon fiber strips – places where the black paint isn’t laid on, leaving the weaved structure visible – cool but subtle on a black car. The lower lights fit in scooped brake inlets. The long hood gets twin scoops reminiscent of the ‘73 Mustang. The front fenders get more serious flares and neatly frame P275/35ZR21-inch Pirelli rubber on semi-gloss black slim-spoke HF wheels that show off the 15-inch cross-drilled disc brakes with orange Brembo calipers.

Doors retain their channeled look over a deeper carbon fiber sill. The rear gets twin side scoops before a more radically shaped wider fender with defined shoulder curves reminiscent of Mustangs almost 40 years ago. These sculpted flared fenders neatly frame P325/30R21s in back, their upper lines converging on an integrated rear spoiler with the “Rocket” name in chrome. 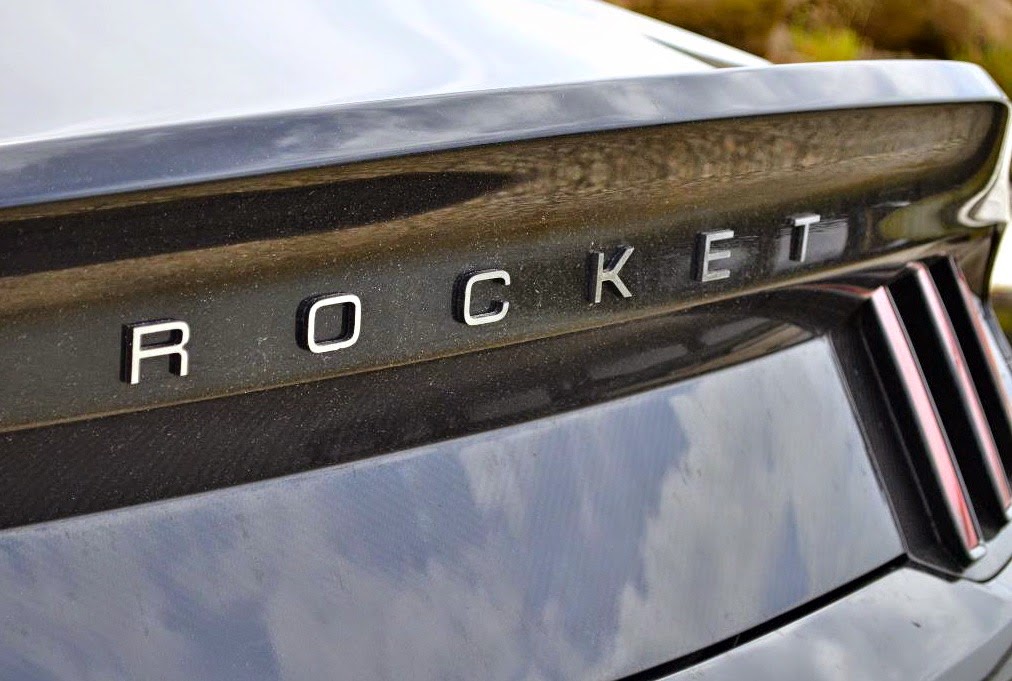 “The whole body was redesigned and the front and rear fenders are wider. I kept it narrow in the waist and really moving it out toward the back, giving it some more aggressive rear fenders which really is reminiscent of the ’68 Mustang,” Fisker said. “I pulled the eyebrows down over the headlamps since we used the original headlamps. I covered them in a carbon fiber cover, and I slimmed out the tail lamps to make it a little more futuristic.” 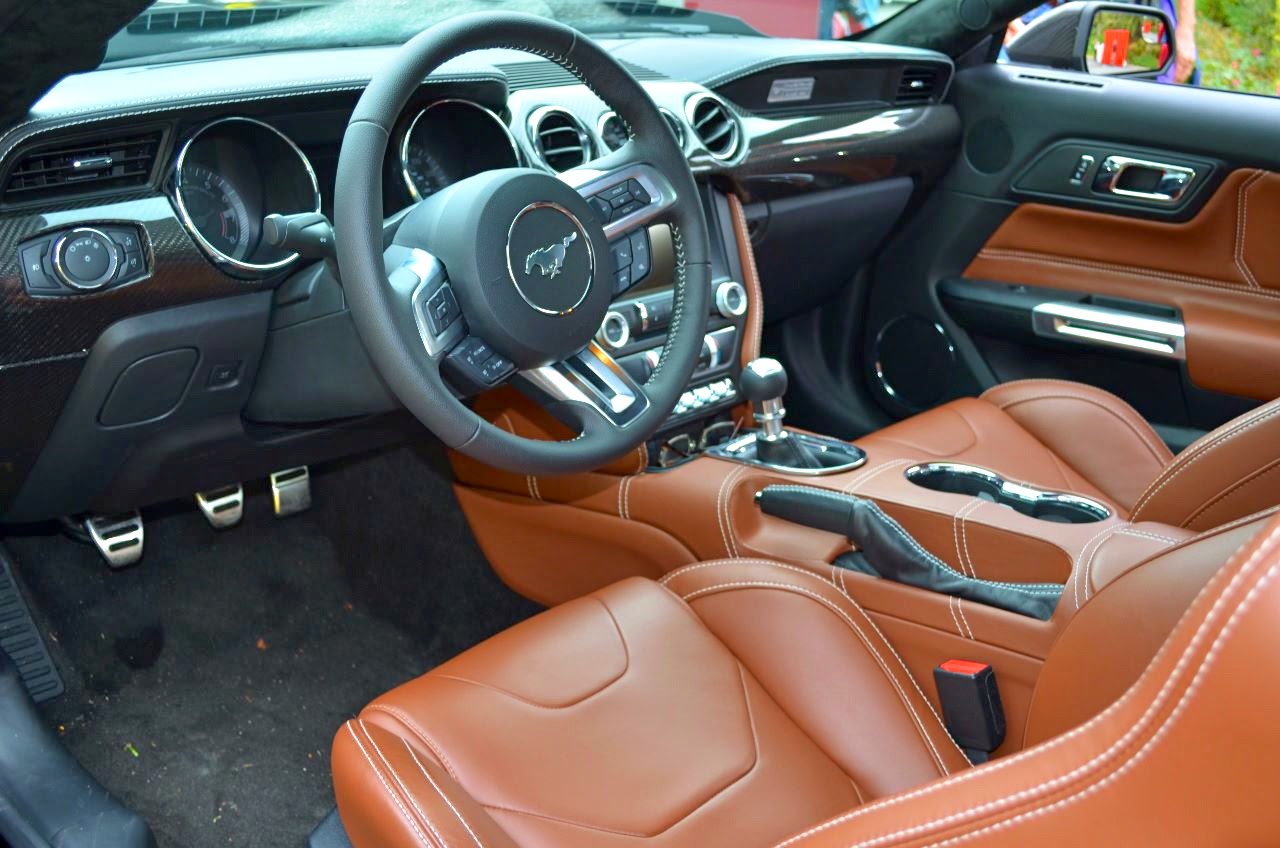 The interior gets a serious dose of hand-finished Italian leather under suede-lined A, B and C pillars, headliner and interior panels, but remains stock Mustang GT, Fisker said. “The Mustang has a great interior so we really didn’t feel like there was any reason to change it.” There are sculpted leather Recaro bucket seats, stock three-spoke Mustang wheel with a thicker leather rim and contrasting stitching. The stock gauges with color LCD trip computer live in a carbon fiber surround under a hand-stitched leather cowl. The dashtop is done in beautiful black leather with contrasting stitching, while the doors, center console and center stack get supple brown leather with double rows of white stitching. 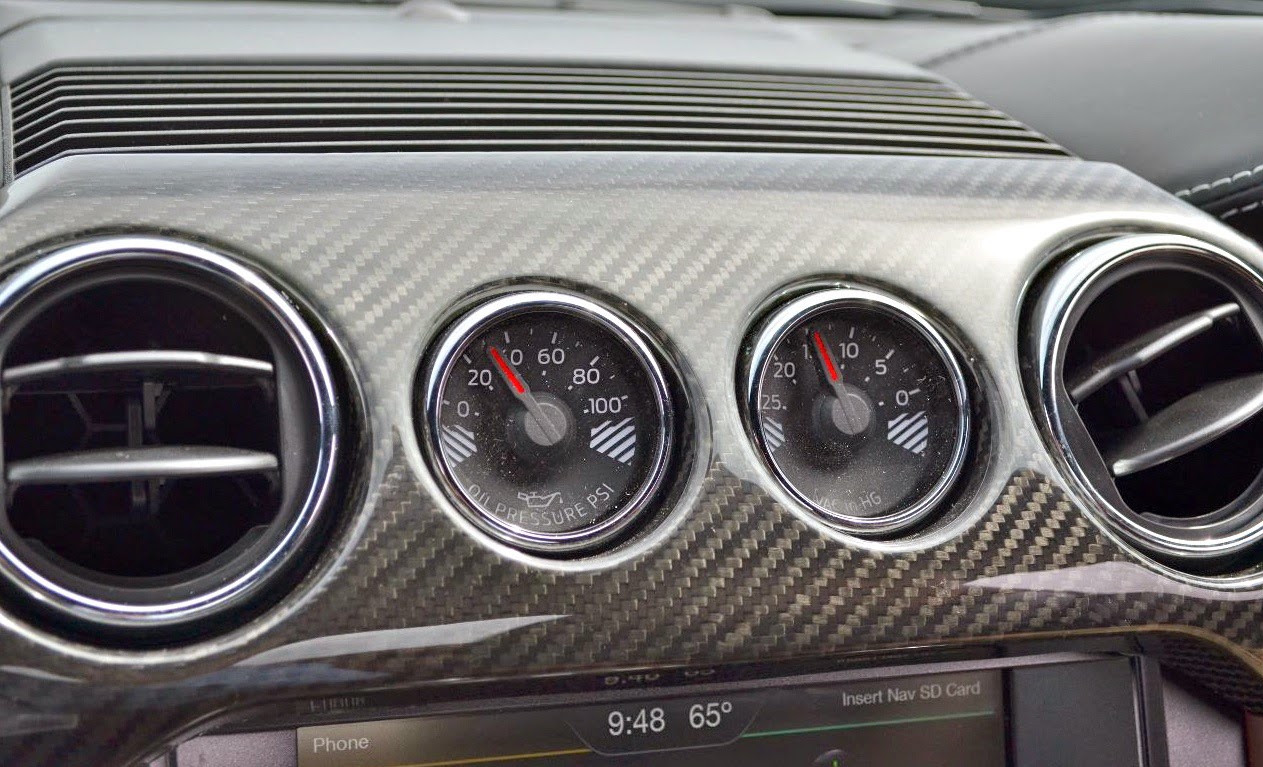 Dash center, the Mustang’s two air vents are split by an oil pressure and boost gauge inset in a carbon fiber panel. The aircraft-inspired toggle switches at the base of the center stack handle driving and steering mode, traction control and warning flashers, next to the red-lit start/stop button. They are stock. The overall feel is high-rent and beautifully crafted with a comfortable driving position easy to find.

Under that handmade carbon fiber beats the heart of a Mustang – a five-liter DOHC 32-valve alloy block V-8. Galpin adds a chromed Whipple supercharger and Bassani cat-back exhaust system with quad tips. Ford’s optional Mustang performance package is there – larger radiator with oil cooler.  Blip the throttle and the engine growls, with a hint of impatient supercharger whine. The six-speed Mustang manual felt just fine with 225 more ponies galloping through it. Throttle tip-in is immediate. “You can always make one-off cars that have 1,000 horsepower, but may not be drivable,” said Fisker. “ It was important for us since we will make a few that it was still drivable very day.” 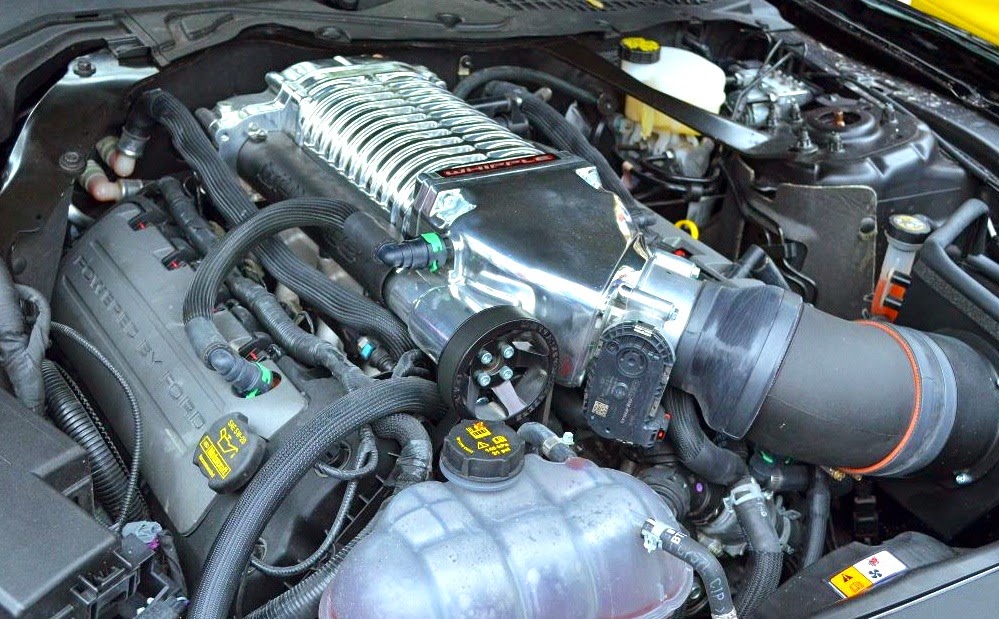 We had one shot at a speed run, and were pushed back in our seat to 60 mph in 4 seconds and 100-mph in 11. The engine snarls, you hear an intake rush and the supercharger whine – so beautiful. That exhaust system is vocal as you exercise the engine. Get it over 2,500 rpm under load and it starts to growl, and 3,000 rpm was boomy if you let it run there for a stretch. Back off and there’s delightful exhaust crackles and overrun pop. The gearbox action was clean with just a slight notchiness. Fifth gear is just fine for cruising, and passing power is just a supercharger whine away. 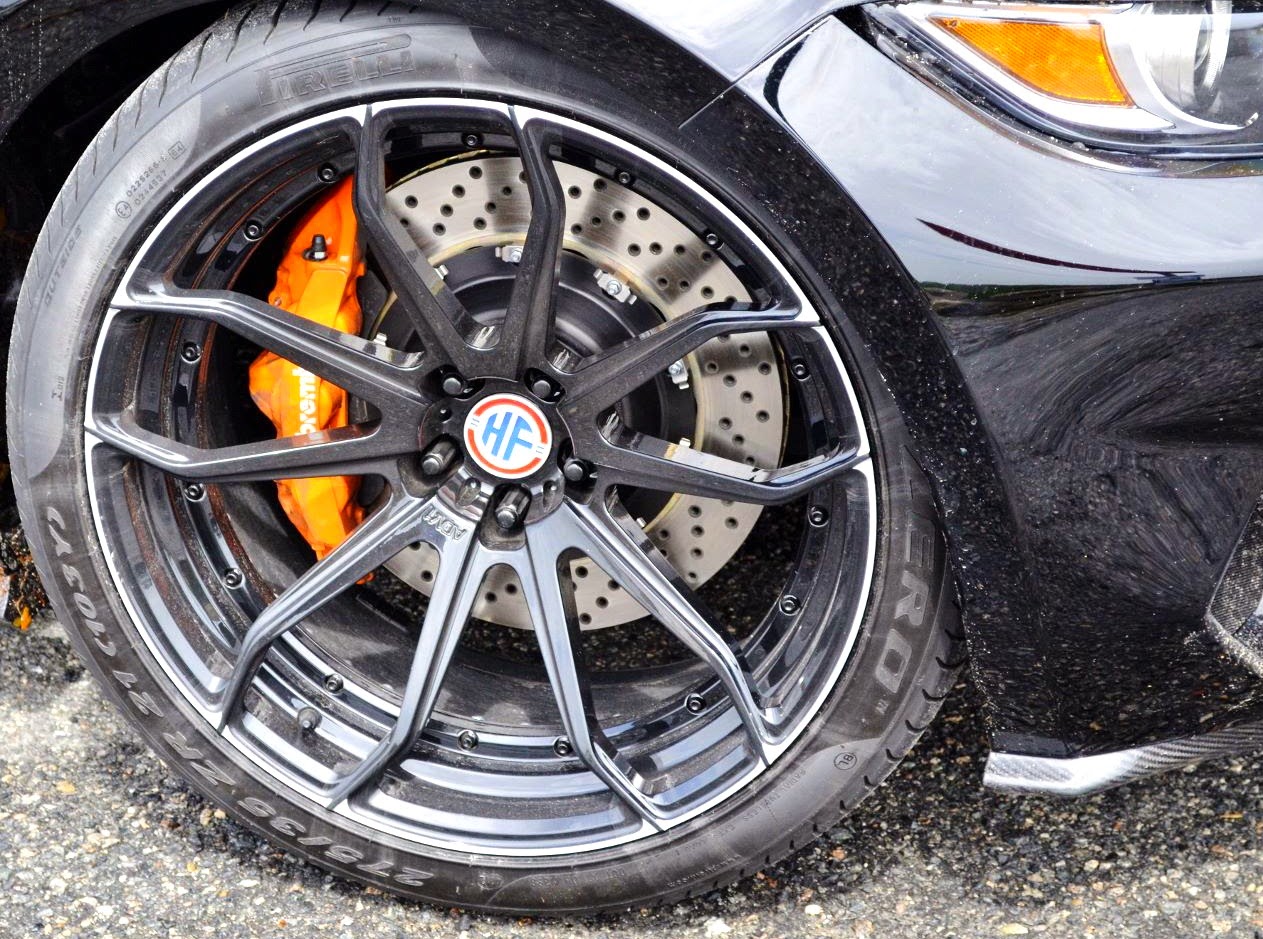 The Rocket rides on fully-adjustable double-ball-joint MacPherson struts with stabilizer bar up front, and Ford’s new integral-link independent rear with coil springs and stabilizer bar. It’s been retuned and felt firm, but was supple enough on the coastal roads we drove it on. It didn’t beat you up on bumps. Alas, curves were non-existent on the test route bar some traffic circles. The car’s electronic stability control is there to help, and so is a 3.73 ratio TORSEN rear differential.  The Brembo 6-piston brake calipers had 15-inch rotors front and rear, and offered a progressive bite, solid pedal feel and very sure stops. The adjustable-effort electric power-assisted steering, set in Sport, had a firm feel with just the right touch of effort with those sticky gumshoes all around. It felt well screwed together. 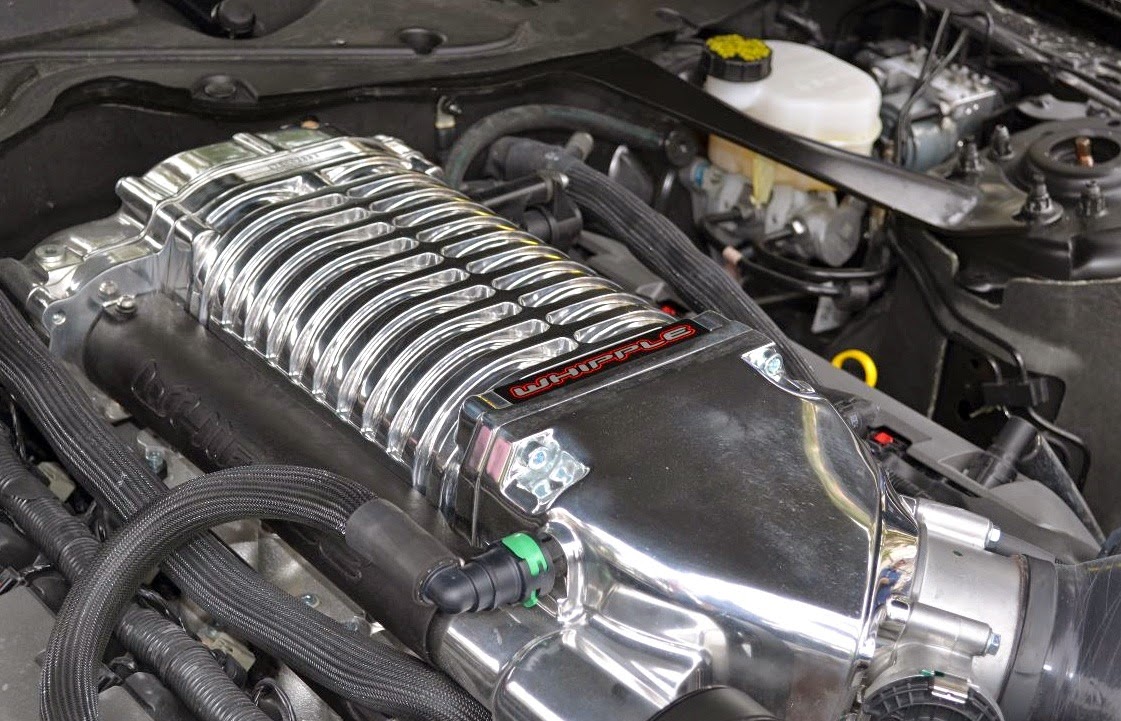