ROD and CUSTOM’s Pat Ganahl brings back a blast from the past: RETRO RODDING: ROADSTERS RULE!

This feature derives from http://carguychronicles.com/hot-rods-customs-cruisin-angelos/ In it, among the many bright-colored photos of then-contemporary 1970s and early-1980s hot rods, I showed these three black roadsters gathered under one light, stating that “…this was just the beginning of the retro-rod movement…” It took a couple of days, but this jogged my memory. It was almost a bad memory, but let’s just call it a weird one.

What I remembered was that, not long after the photo shoot at Angelo’s in early-1982, I asked Tom Courtney, Dick Pickerel, and Tom Leonardo if I could get their three throw-back roadsters together one evening in a large, empty parking lot somewhere in Orange County, to photograph them and do a story not only explaining and illustrating what this “new” retro-rodding trend was, but also showing three different ways you could do it. The results: RETRO RODDING: ROADSTERS RULE!

So we did. I had to work quickly to capture the evening light–best for black cars – shooting details on all three, mostly on black-and-white film. I had each of them fill out my brief tech sheet. And I wrote a four-page story. I should reiterate that I was freelancing at the time, so I shopped what I thought was a good, newsworthy story on three cool and/or historic cars to the rod magazines of the time, including Street Rodder and Hot Rod. They all rejected it. Too soon? Apparently so. 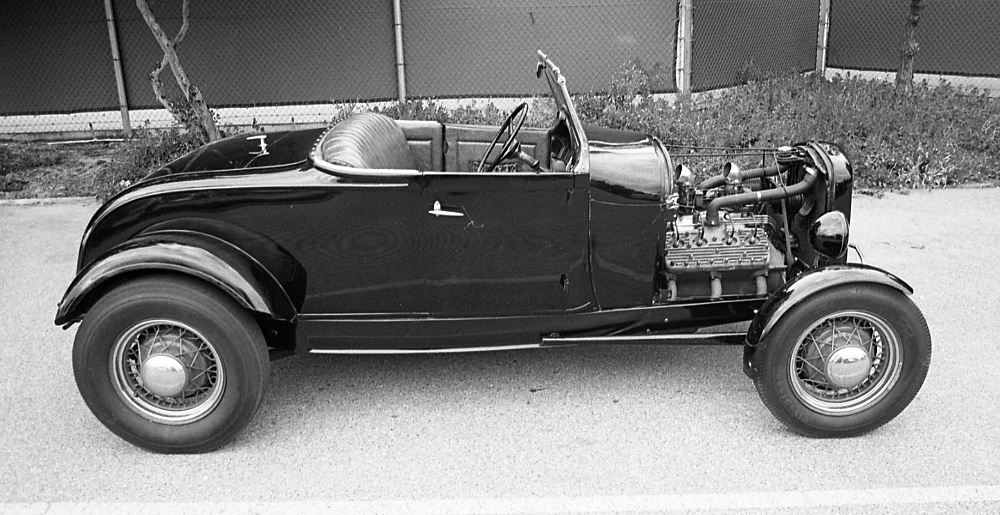 It wasn’t because the article or photos were bad. It just wasn’t what was happening – yet. So it took me a while, digging through my files, to even finds the envelope. But I did. It had proof sheets and negs of four rolls of B&W film, several 5 x 7 prints, three tech sheets, and a typed-out 4-page story, complete with penciled edits–what we’d call a rough draft. So, since I am finally my own boss, I decided to run it here. The cars are definitely cool, and the story is still quite pertinent. Hot rodding today has reached a wonderful level of inclusion. So I’m going to present the article (and photos) just as I wrote it in 1982. That’s nearly 40 years ago. Keep this in mind. Some of the tenses are wrong. I’ll give a little update at the end.