Longtime friend Bill Kolb is probably best remembered in the enthusiast community as the 1960s poster boy for Ford’s Total Performance and Win On Sunday; Sell On Monday marketing concepts. His close friends often called him, “Mr. Monday! We bonded after I did a story on him and his Lightweight 427 Galaxie in 1963 and we’ve been friends since. Remembering Bill Kolb, Jr., 1941-2021. 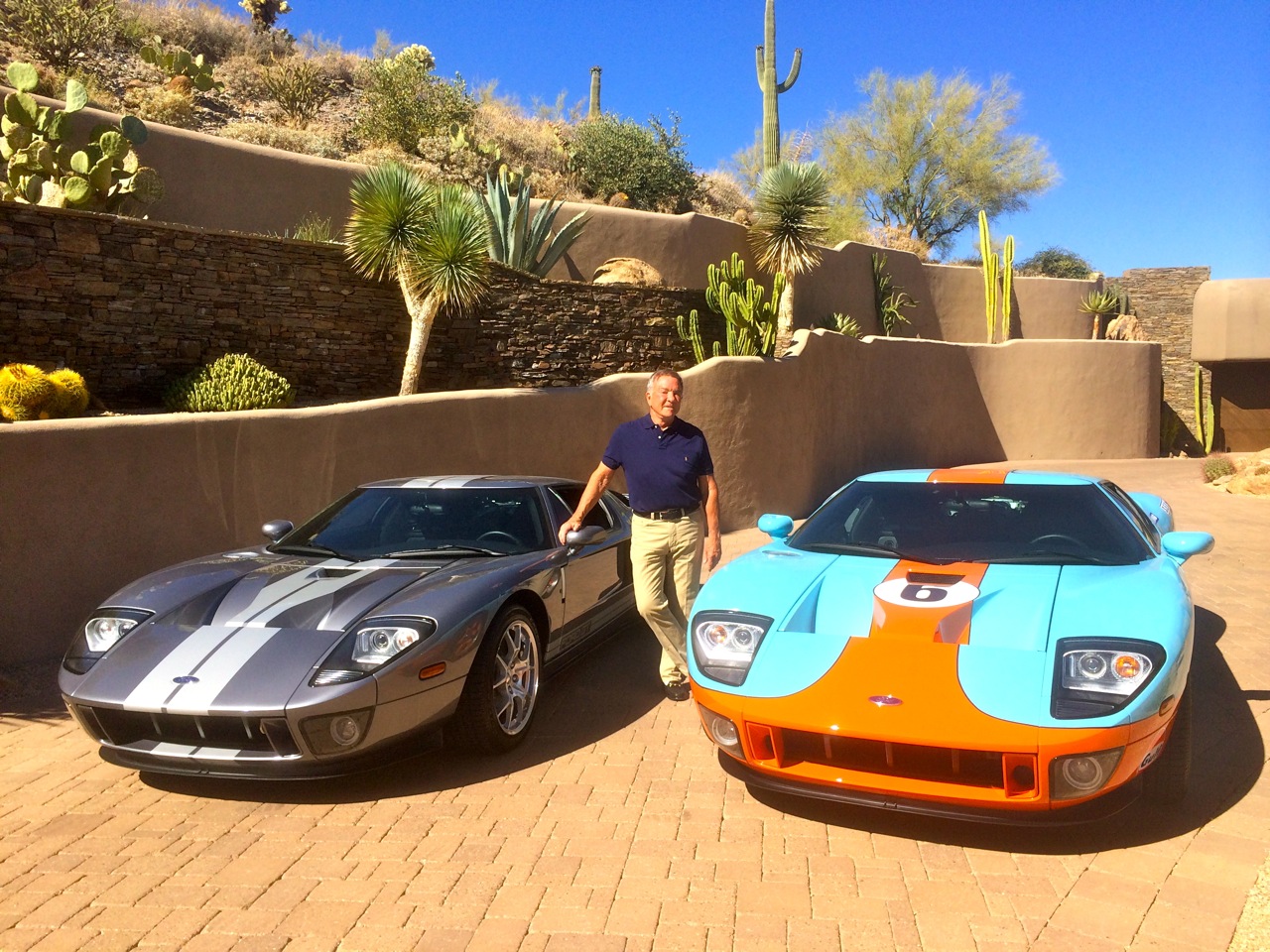 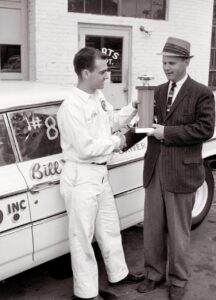 Bill Kolb, Jr. passed away quietly at home in Carefree, AZ, on Friday, December 3, 2021, comforted by his wife, Maryann and family. Bill was 80 years old and spent his entire adult life in the automotive retail business, and building, racing and marketing specialty cars. He was the dealer-principal at White Plains Ford, (White Plains, NY), Bill Kolb, Jr. Ford, (Blauvelt, NY); he and Maryann were dealer principals at Bill Kolb, Jr. Subaru (Orangeburg, NY).

In 1963 he campaigned a factory 427 Lightweight Galaxie; in 1964 a 427 Fairlane Thunderbolt Super/Stock in the Northeast states, both sponsored by Larsen Ford in White Plains, NY where he was employed as High-Performance Sales Director. His next venture was more entertainment than Eliminator! 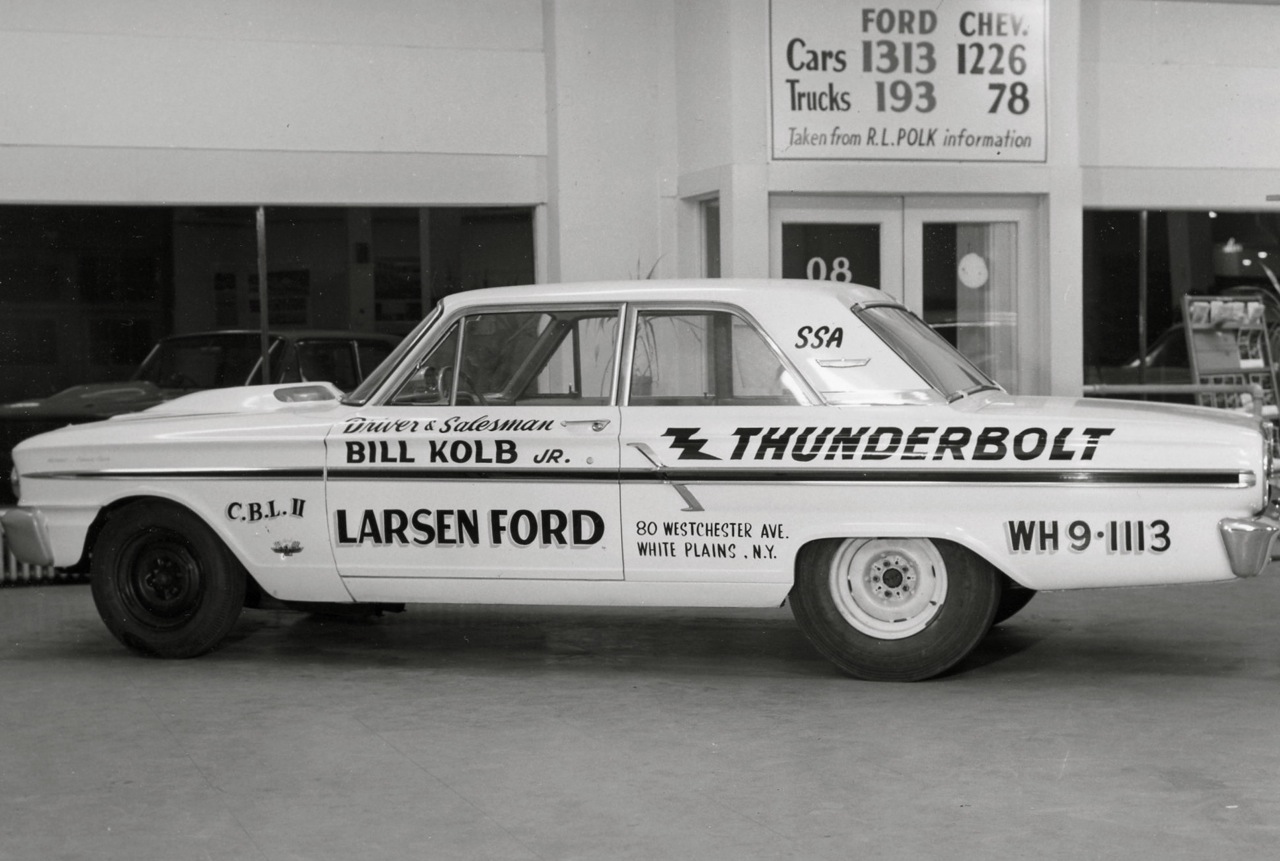 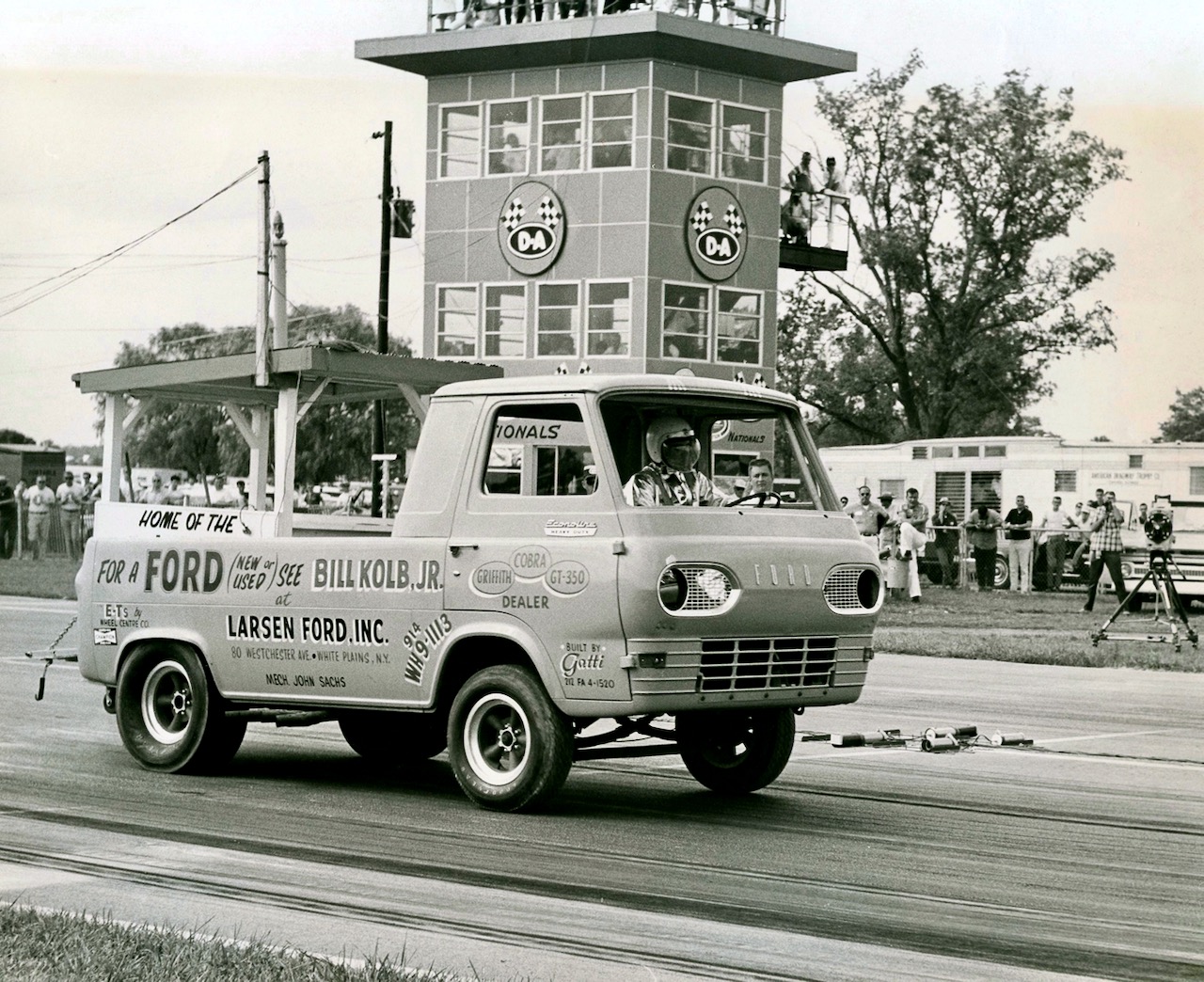 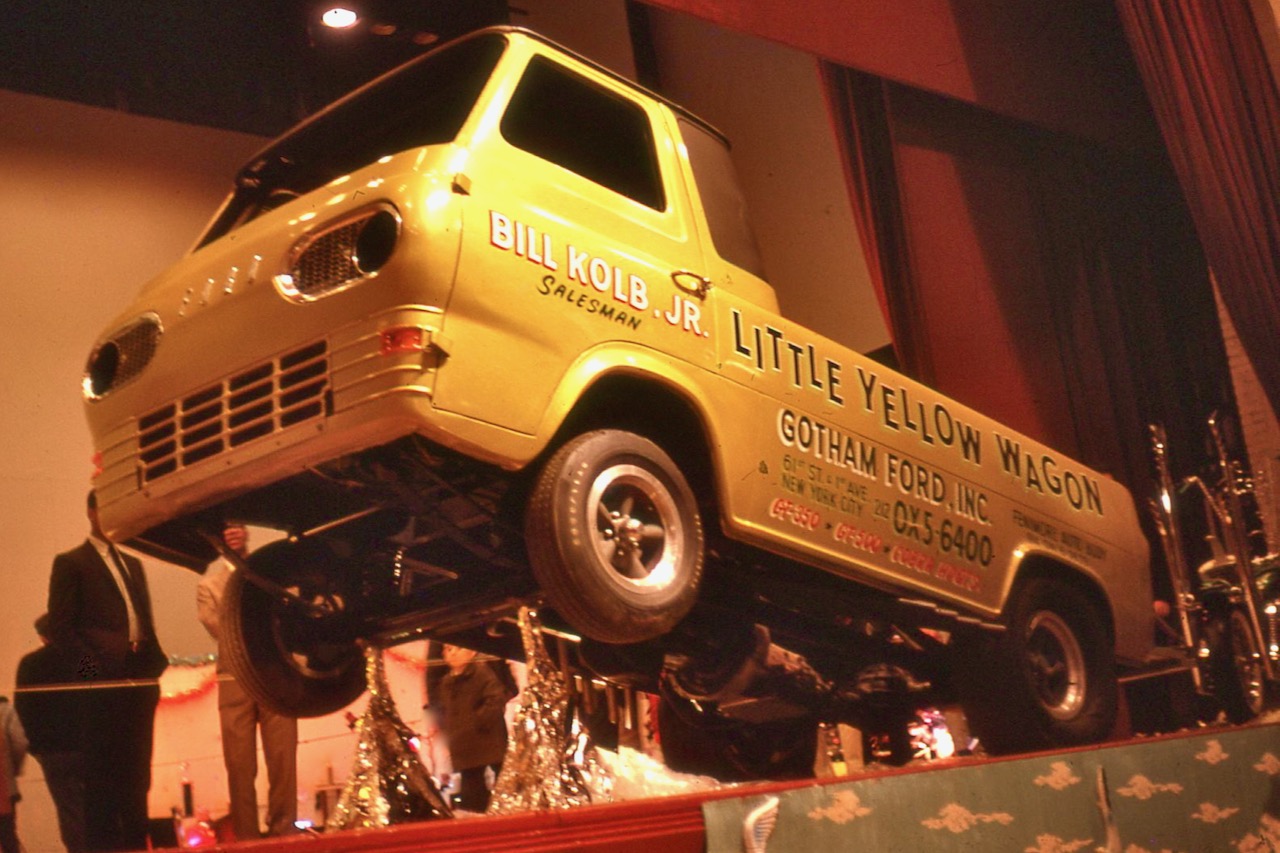 Enter the Little Yellow Wagon, a raucous 427-powered “billboard” capable of running the entire quarter-mile on its rear wheels. It actually proved to be a more effective sales tool than previous Super/Stock racecars. Kolb and his ’65 Ford Econoline pickup joined the ranks of wheel-standing exhibitionists, headed by Bill “Maverick” Golden who, driving his Dodge Little Red Wagon, pioneered the genre. The Little Yellow Wagon was powered by a Hilborn-injected 427 side-oiler built by Tasca Ford’s John Healey. It was mounted on a sub-frame behind the cab.

Partnered with longtime friend and top Ford tech, John Sachs, Kolb returned to Larsen in 1975, purchased the dealership and renamed it White Plains Ford. Between 1975 and 1981, White Plains Ford was one of the top performing stores in the New York District. 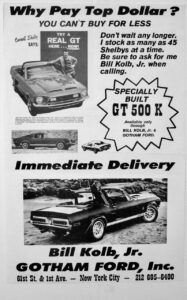 A close friend of Carroll Shelby, and Lee Iacocca when he was Vice-President of Ford’s Car and Truck Group, Kolb, at Iacocca’s direction, set up a unique Shelby dealership within Gotham Ford in New York City. It was the first dealership-within-a-dealership selling and servicing only Shelby automobiles! Kolb became a member of Ford’s Dealer Council for Performance Cars – the only salesman to be part of this group. He then became a key player in Ford’s Shelby marketing programs when Ford hired him to be national spokesperson for the Shelby dealer network.

Between his time at Larsen and Gotham Ford dealerships – 1965 to 1970 – Kolb sold more Shelby Cobras, GT Mustangs and GT40s than anyone else in the country. Documented by SAAC (Shelby American Automobile Club), Kolb’s Shelby sales records, including the most 427 Cobras (18), are legendary. 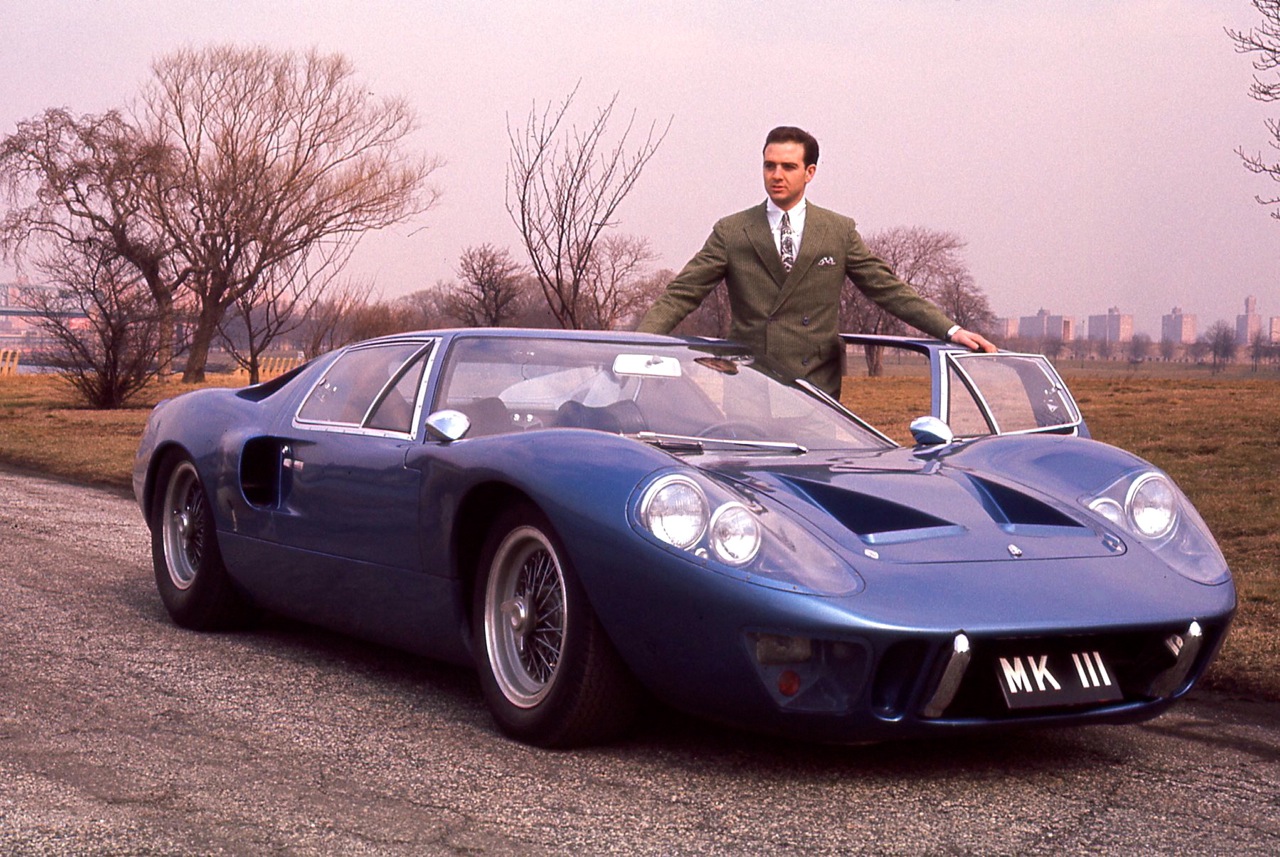 Martyn Schorr, one of Bill’s oldest friends and, in 1967, editor of Hi-Performance CARS Magazine, recalls the time that he and Bill spent a day test-driving the prototype Mark III GT40 (M/3 1101) around New York City. It had been left in Bill’s care at Gotham Ford after being displayed at the New York Auto Show.

“In April 1967, Bill Kolb called and asked if I wanted to have a little fun test driving a GT40 road car, Ford’s first real Supercar. I thought of taking it to Lime Rock or another track. He had other ideas saying, ‘road testing should be done on the road.’ 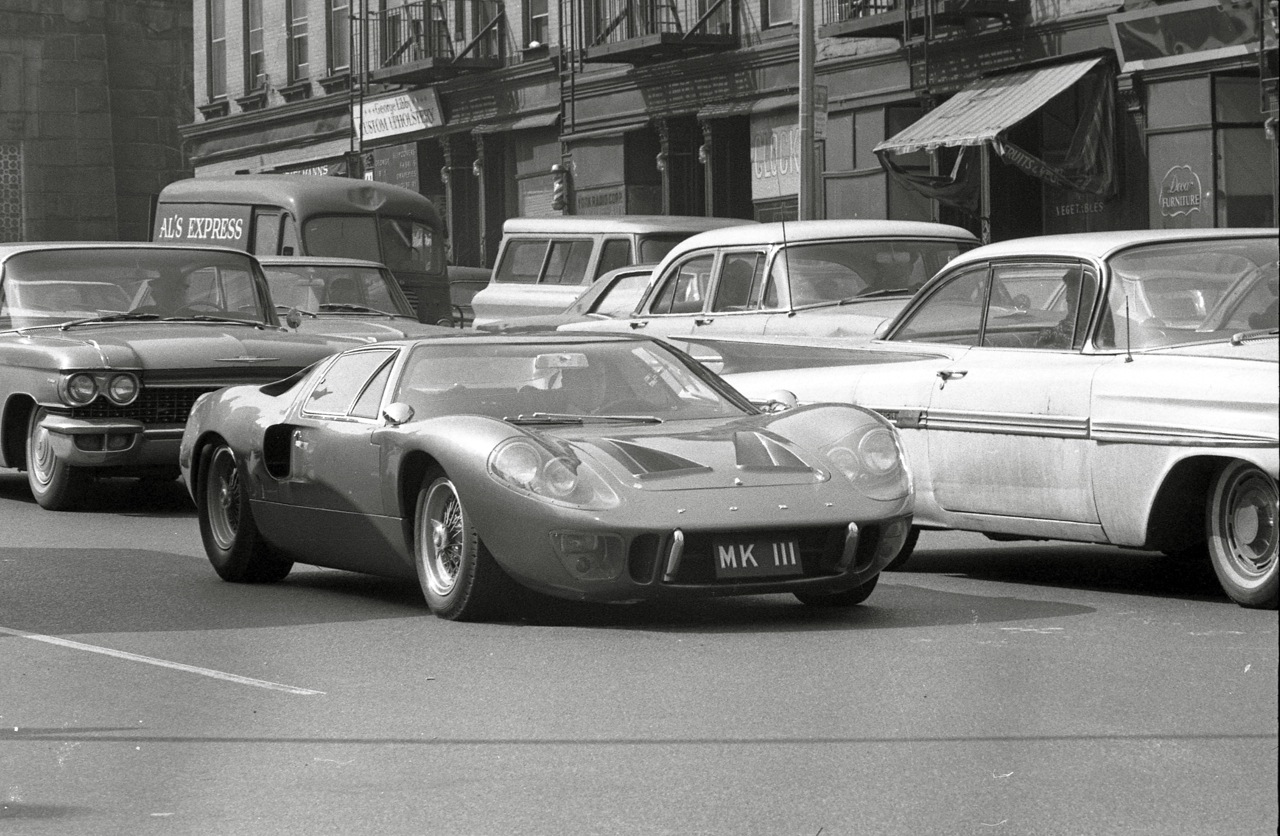 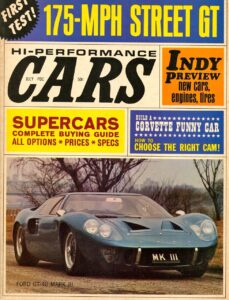 “We ended up dodging New York City taxis, delivery trucks and the occasional Police car, and frightened woman, children and puppies! It was a glorious day. How Bill and I stayed out of jail that day still mystifies me. Our only real challenge was trying to pay tolls on the Triborough Bridge since the GT40 didn’t have roll-down windows! It ended up being the cover story of the July 1967 issue of Hi-Performance CARS.

In 1984, Kolb enhanced his relationship with Ford as a manufacturer. The company was called Spoilers-Plus and Kolb produced aerodynamic styling and ground-effects kits for slow-selling vehicles like the Ford EXP. The line was expanded to include bolt-on restyling components for Mustangs and Thunderbirds. Spoilers-Plus became the first aftermarket company to sell aero-enhancing body kits to Ford and its dealer network. 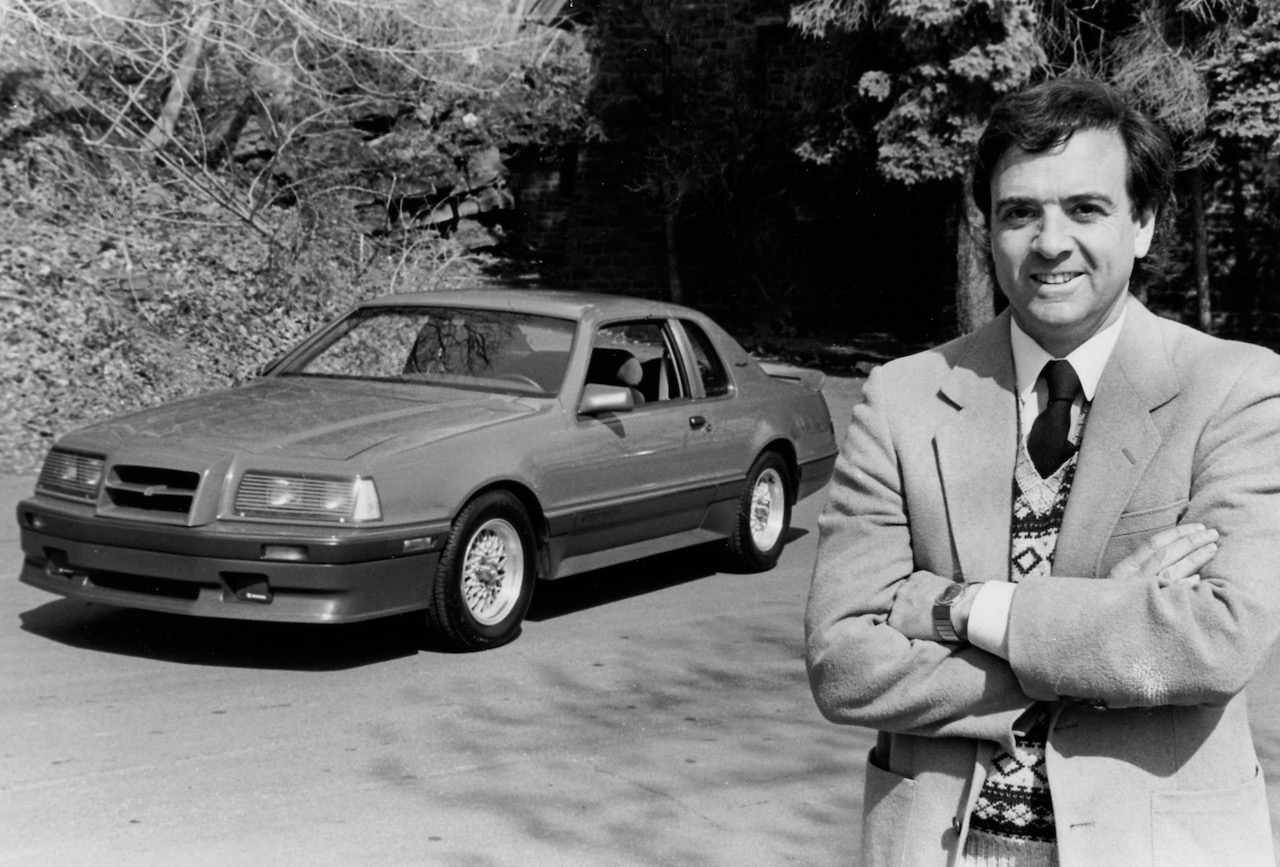 Kolb’s Spoilers-Plus front air dam was on Bill Elliott’s 1987 Daytona 500 winning Thunderbird, averaging over 176 mph and setting a record. After the race, Elliott sent Bill a note: ‘Thanks for the air dam, it has the record’, signed Bill Elliott.”

Total Performance has always been a way of life for Bill Kolb, Jr. who parlayed a passion for racing and high-performance cars into a legendary career. Masterful at building and marketing specialty vehicles, he kept his decades-old Ford connection alive with Tungsten Grey and Heritage model ’06 Ford GTs. He drove them as long as possible until being sidelined with health issues. 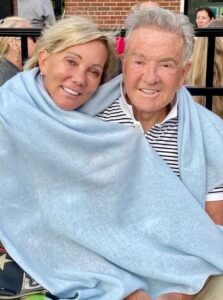