Skip to content
Our Mike Matune was on the field with 100 select cars and motorcycles, celebrating divergent eras and types. 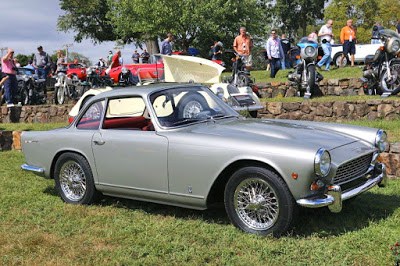 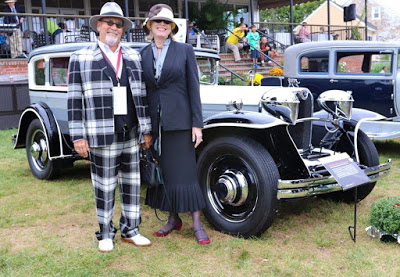 The Radnor Hunt Concours d’Elegance in Malvern, PA again entertained and informed Concours goers with top attractions. Here we have Alan Anspaugh’s ‘60 Triumph Italia 2000 GT. These were built at the behest of the Italian Triumph distributor who envisioned TR3 chassis wrapped in Italian coachwork. While the results of Giovanni Michelotti styling and Vignale’s coachwork are impressive, it was another concept with great intentions wiped out by market forces. In the end only about 330 of the planned 1,500 were built.

When we think of traditional “Concours Fare” we think of highly-styled cars of the classic era combined with art and fashion. A ‘32 Ruxton Model C Four Door Sedan certainly fits the bill. While only a blip on the automotive timeline, the Ruxton made a splash with FWD allowing a lowered profile to set off a distinctive striped paint scheme. Owners Celesta Pappas-Bosés and Scott Bosés dressed to complement their car. 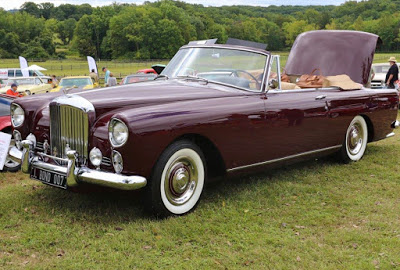 But high style wasn’t confined to the classic era as shown by Marlene & Gene Epstein’s ‘62 Bentley S2 Continental Sport. Combined with its impressive top-down style, it has an array of high-end appointments to provide fast, luxurious touring. Included are things like bespoke luggage and a custom picnic hamper. Perhaps unique to this car, there are heated vests that plug into the dash, allowing comfortable motoring even as temperatures drop! 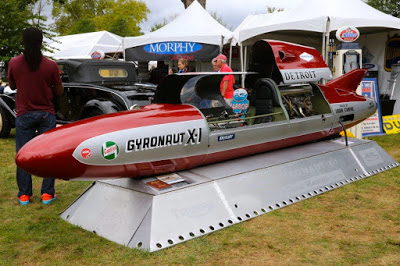 The motorcycles featured included BMW’s, Police bikes and Land Speed Record machines. Sandra & Steve Tremulis brought the instantly recognizable Gyronaut X-1. The car’s history reads like an automotive who’s who: styled by Alex Tremulis with a body constructed by Vince Gardner and a chassis by Logghe Stamping. Along the way racing names like Maynard Rupp, Roy Steffey and John Marsh left their fingerprints. Powered by two Triumph vertical twins, it carried Bob Leppan to a World’s Fastest Motorcycle record of 245.667 MPH. at Bonneville in 1964.   Unfortunately, deteriorating salt conditions have led to fewer and fewer races at Bonneville in recent times.  For more information on plans to remedy the situation, please visit http://www.savethesalt.org/ 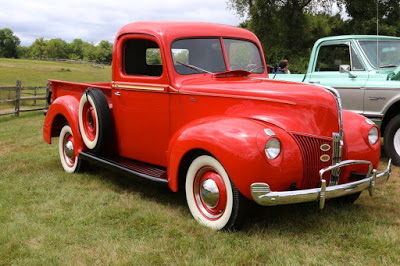 Perhaps more out of the realm of traditional “Concours Fare” was the addition of pickup trucks to the Concours show field. Today the pickup is a bedazzled boulevard cruiser but its origin lies in a more utilitarian place. They were once the domain of farmers, tradesmen and other commercial users. Vince Tague’s ‘40 Ford V-8 pickup displays that point in time with its simple, minimally adorned, body lines. 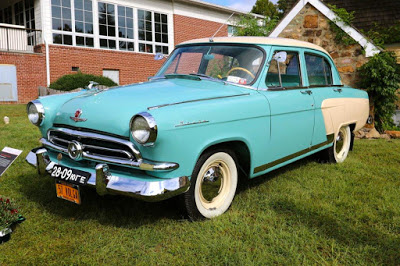 A Concours can also give you a chance to compare and contrast what was happening in the automotive world in different parts of the world.  Here is the former Soviet Union’s version of automotive luxury, a ‘57 Volga Gaz-M21V, owned by Dimitri Shevetsov. This was the largest, most luxurious car produced in Russia for consumer consumption and was the conveyance of the rich, powerful and famous. 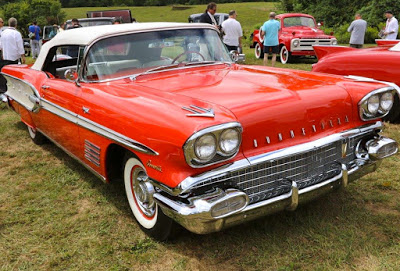 Now compare the Volga to George Weaver’s ‘58 Pontiac Bonneville. Like the Volga it sports two tone paint and white sidewall tires, but similarities seem to diminish after that. Weaver’s car is a highly optioned convertible with a Tri-Power V8. Included options were power windows, a tissue dispenser under the dash and a radio that could be removed and used as a portable. The interior sports four bucket seats.  Chrome accents abound.  Size wise it dwarfs the Volga. Clearly Americans had a different take on what was considered a “necessity” in their car design. 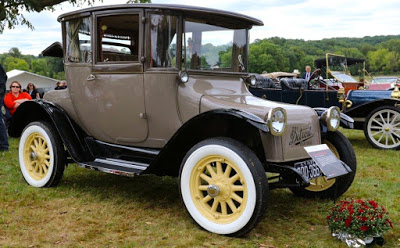 Occasionally, the same concept is used to solve a different issue at another time. With all of the emphasis on electric and hybrid cars today, remember that they are not a new idea. Detroit Electric was a successful manufacturer of electric cars in the early part of the Twentieth Century. Richard Amuso’s ‘23 Detroit Electric 97B Brougham uses fourteen six-volt batteries to power the car to speeds of about 20 mph with an 80-mile range. It is said they found acceptance among women of the time as they were quiet and didn’t require hand cranking. The electric car of the time, however, fell out of favor when speeds and distance expectations of the automobile increased. Today they have returned to favor as a potential solution to environmental issues. 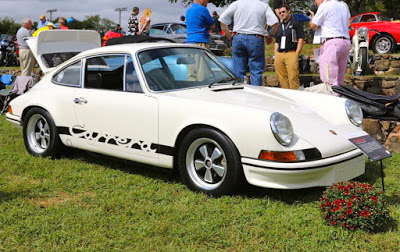 The “Homologation Special” category has been around for a while and a number of manufacturers have produced them, perhaps none as well as Porsche. A Homologation Special is a street version of a car made with certain options and in such a configuration so as to fulfill production requirements for race components. Steven Midgett owns this ‘73 Porsche 911 Carrera 2.7 RS. Porsche produced about 500 with bigger engines, upgraded suspensions and various aerodynamic improvements. In order to lower weight, normal production components, unnecessary for racing, were left off. It wouldn’t be the last time Porsche sold a limited run of cars with less equipment for more money! 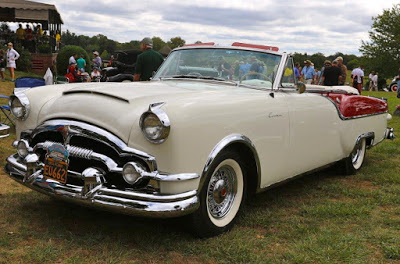 Radnor Hunt recognized and celebrated the cars of Packard this year. A marque now gone from the American automotive lexicon, it once occupied a lofty position in the industry, known for styling, luxury and engineering excellence. To illustrate the point, here is David Markel’s ‘53 Packard Caribbean Convertible. These were limited-edition cars with highly distinctive styling and finishes. Just some of which includes wire wheels, leather upholstery and special paint. With an over-$5,000 price tag and limited 750 unit production run, they weren’t common. 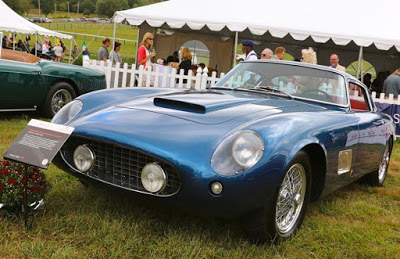 In 1959, three sports car enthusiasts in Texas sent Corvette chassis to the Italian coachbuilder, Carrozzeria Scaglietti. The plan was to duplicate a concept used extensively by Ferrari, whereas a sleeker, lighter racing body covered a production chassis. The cars would then take on Ferrari’s own 250 Berlinettas.  Alas the effort fell victim to politics; in Italy where Ferrari was not too happy with “his” coachbuilder doing a competitive car and in the U.S. where GM’s anti-racing philosophy put the kibosh on the project after just three examples had emerged. Today we are left with a striking shape as proven by J. W. Marriott’s example. 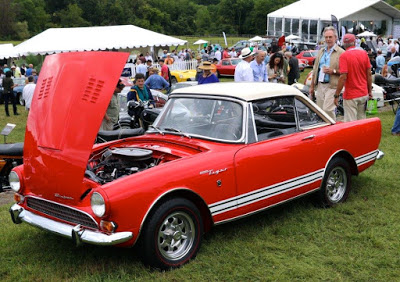 Rob Barnes Sunbeam Tiger is an early example of a Type II Tiger, after production had shifted to cars powered by a Ford 289-inch V8. Raced early in its life, it has migrated to the show field. The aluminum wheels, side stripes and red-striped tires help tell us it is a car of the 1960s. For those of us who are aficionados of the Total Performance era, Car Guy Chronicles’ Editor Marty Schorr’s new book , Ford Total Performance: Ford’s Legendary High-Performance Street and Race Cars, due out in November, promises to provide a perspective on those heady times from someone who lived it. The book is available for pre-order on Amazon at http://www.amazon.com/Ford-Total-Performance-Legendary-High-Performance/dp/0760348588