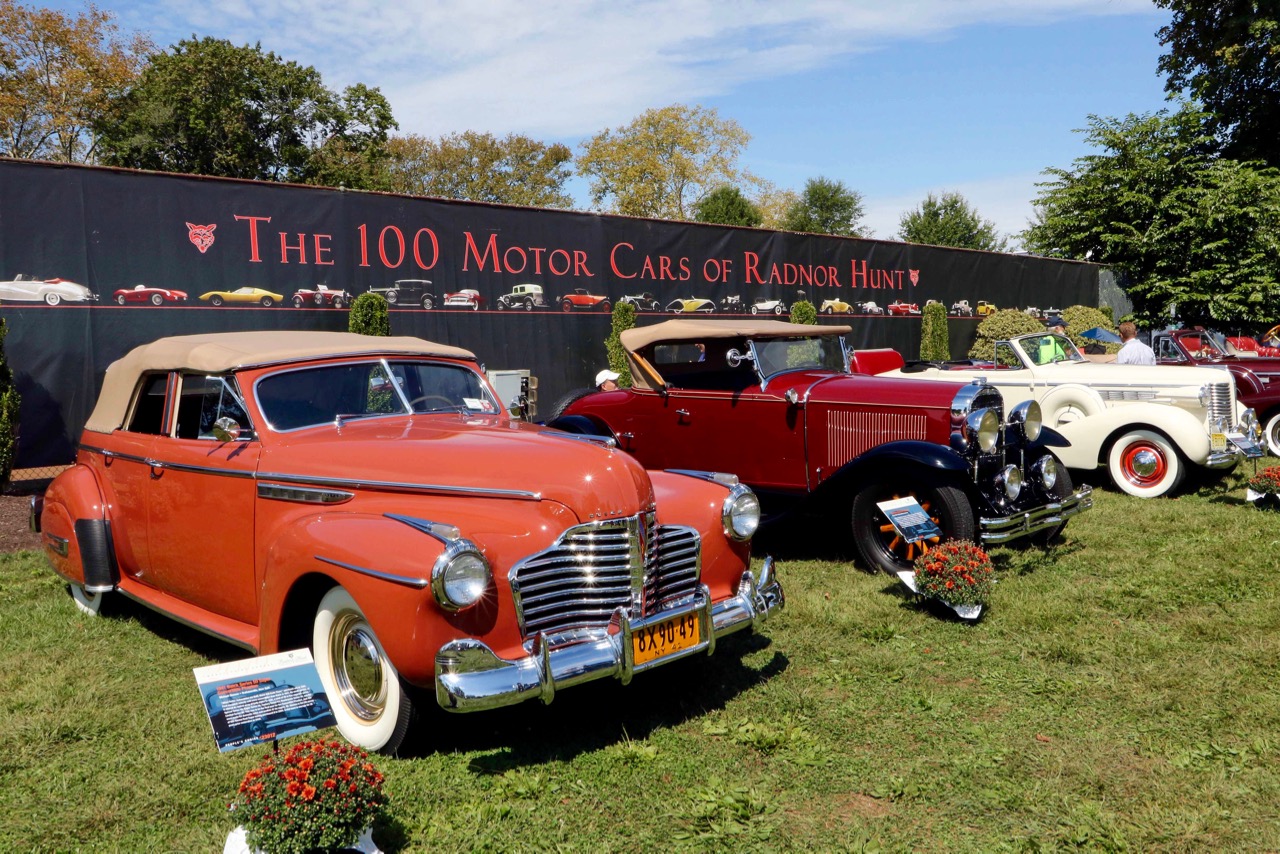 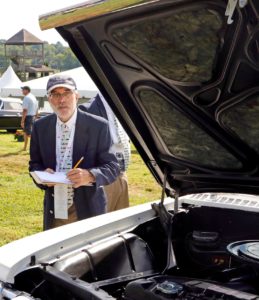 Each year the Radnor Hunt Concours has signaled the beginning of Fall and this year was no different. For the 23rd year, Founder & Chairman, Mike Tillson, his staff and volunteers have brought together 100 exemplary historic motorcars, along with an impressive display of motorcycles. The Concours capped a three-day celebration of motoring events, all for the benefit of the Thorncroft Equestrian Center – https://www.thorncroft.org/index.php – that provides therapeutic horseback riding experiences for children and adults with mental, emotional and physical disabilities. This year’s featured marque: RADNOR: BUICKS IN THE HUNT! 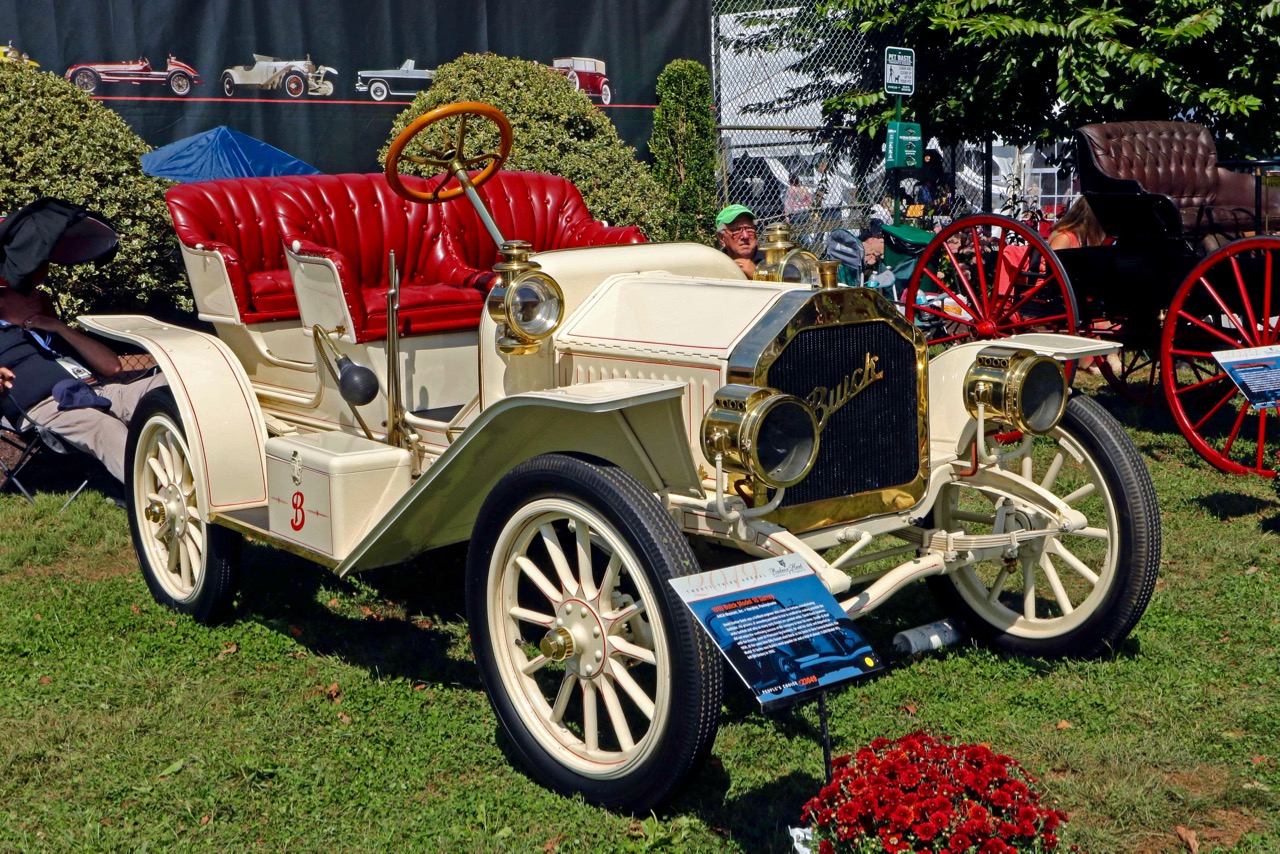 Founded by David Dunbar Buick, the brilliant Scottish born engineer, Buick became the largest selling car in America at the time. Its size and reputation for superior engineering caught the eye of William Durant who took over the company and used it to form the basis for General Motors. The AACA Museum’s ‘10 Model 10 Surrey is painted white as were a lot of early Buicks. Legend has it that the reason for this was because David Buick made his initial fortune when he invented the process for annealing porcelain to iron, revolutionizing the bathroom fixture business! 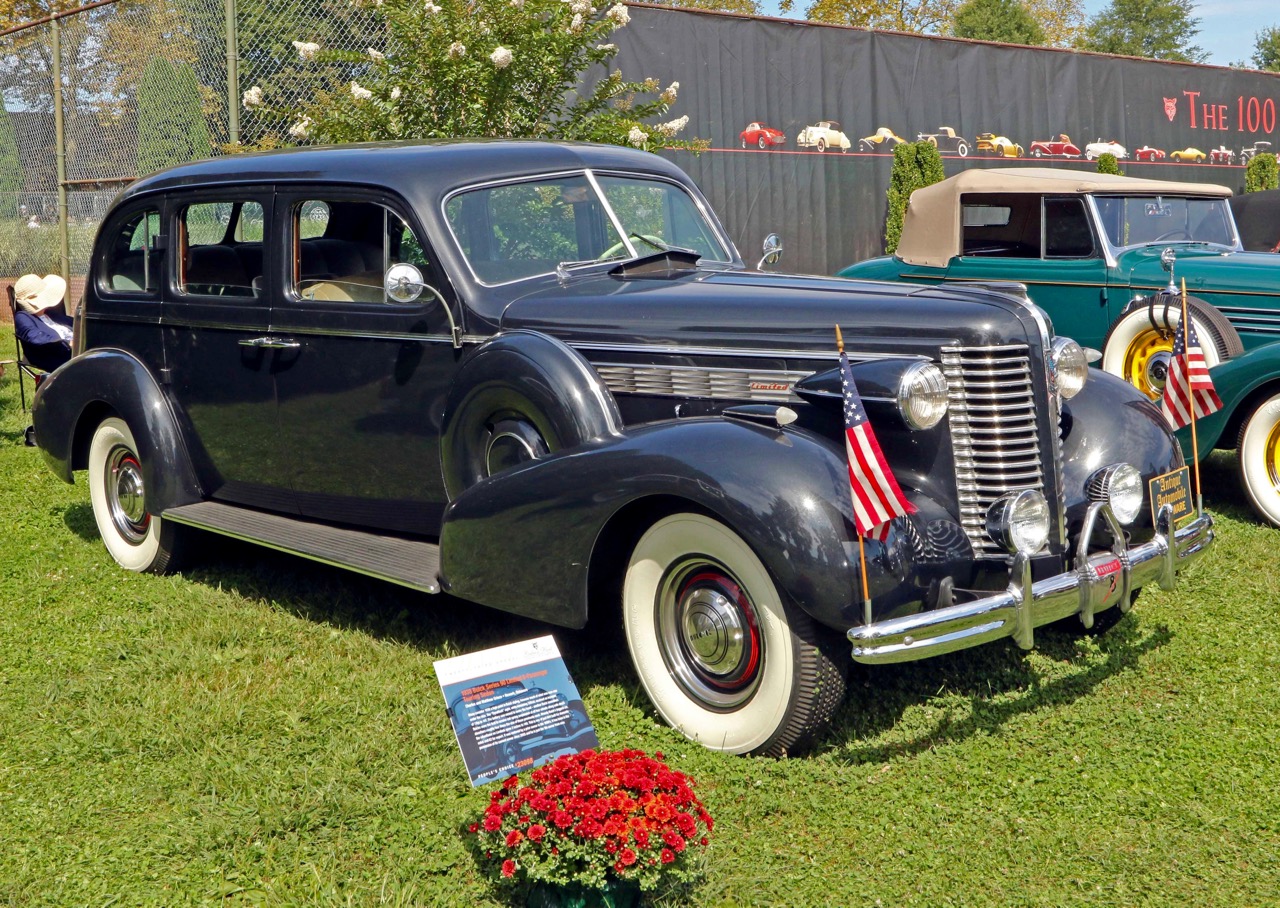 Walking through the show field was like taking a trip down Buick Memory Lane. Over forty examples adorned the pastoral Radnor Hunt grounds. This striking ‘38 Series 90 Limited 8-Passenger Touring Sedan was shown by Charles & Matthew Grieco. It showcases that combination of styling and engineering excellence that characterized Buick products over the years. The styling is distinctive yet understated. Under the skin, the car’s mechanics sported advancements like four-wheel coil-spring suspension, a longer wheelbase and larger shocks for a smoother ride. 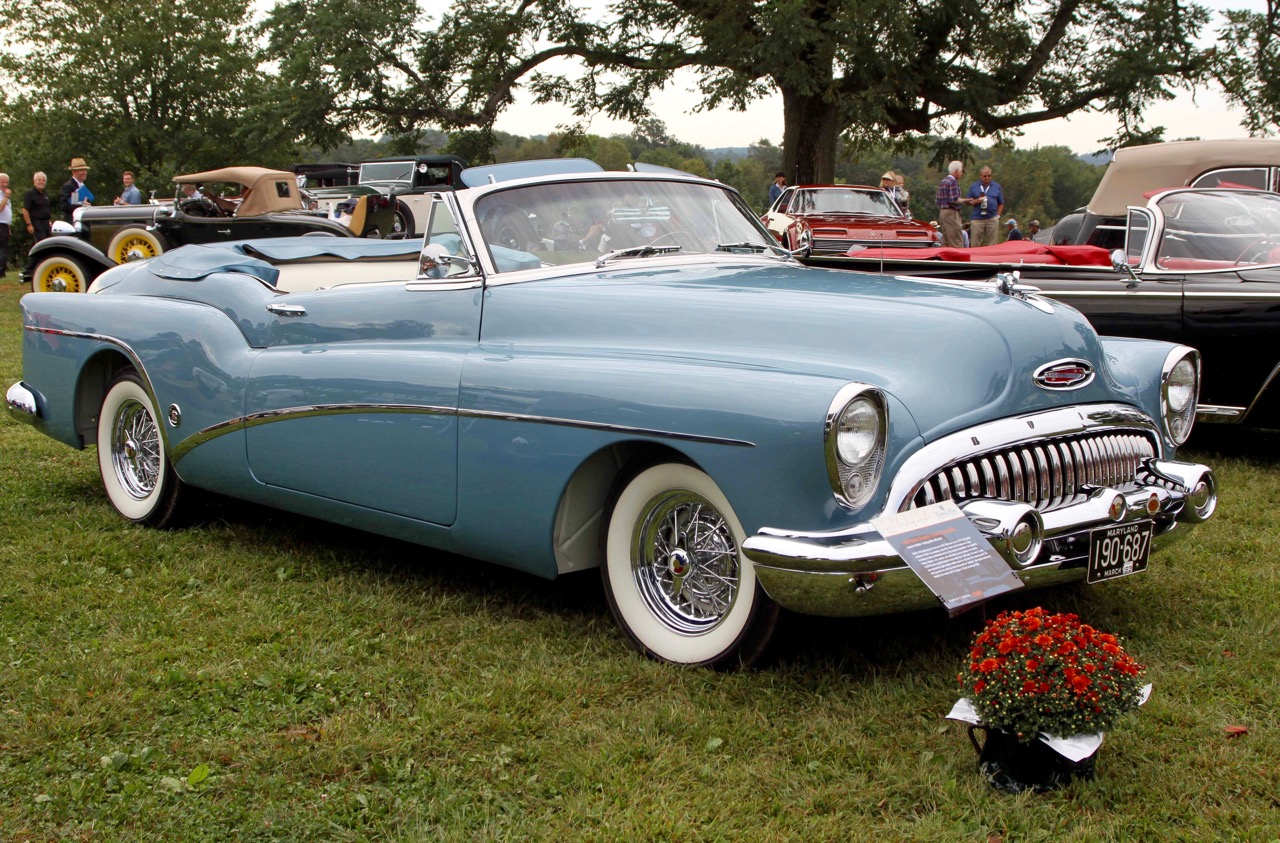 Buick pulled out all the stops to celebrate its 50th anniversary in 1953 with their unique Skylark convertible. The styling was distinctive, and every modern convenience was included. In keeping with their reputation for engineering, the car also sported Buick’s first modern OHV V8. The Skylark convertible epitomized the optimism of the early-1950s. We thank Lawrence Macks for bringing his fine example for all to enjoy. 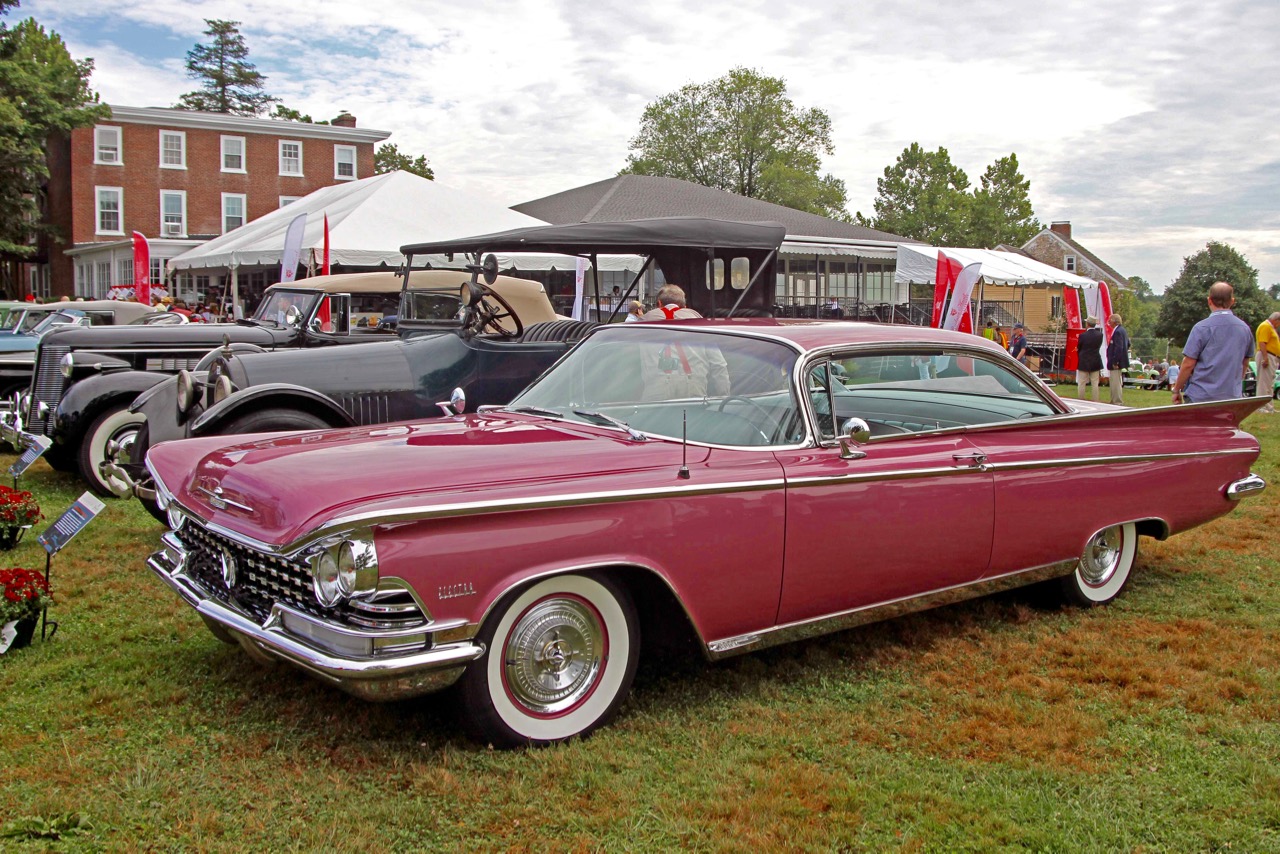 As the 1950s progressed; the open road beckoned. Automakers responded with ever lower, longer, wider and more powerful offerings. Cars sprouted fins that seem to grow ever larger. Styling became more distinctive and color pallets expanded. Indicative of all of these trends is the Hallowell’s ‘59 Electra two-door hardtop coupe. Finished in a color known as “Lido Lavender”, it bears testament to life in the Eisenhower years. 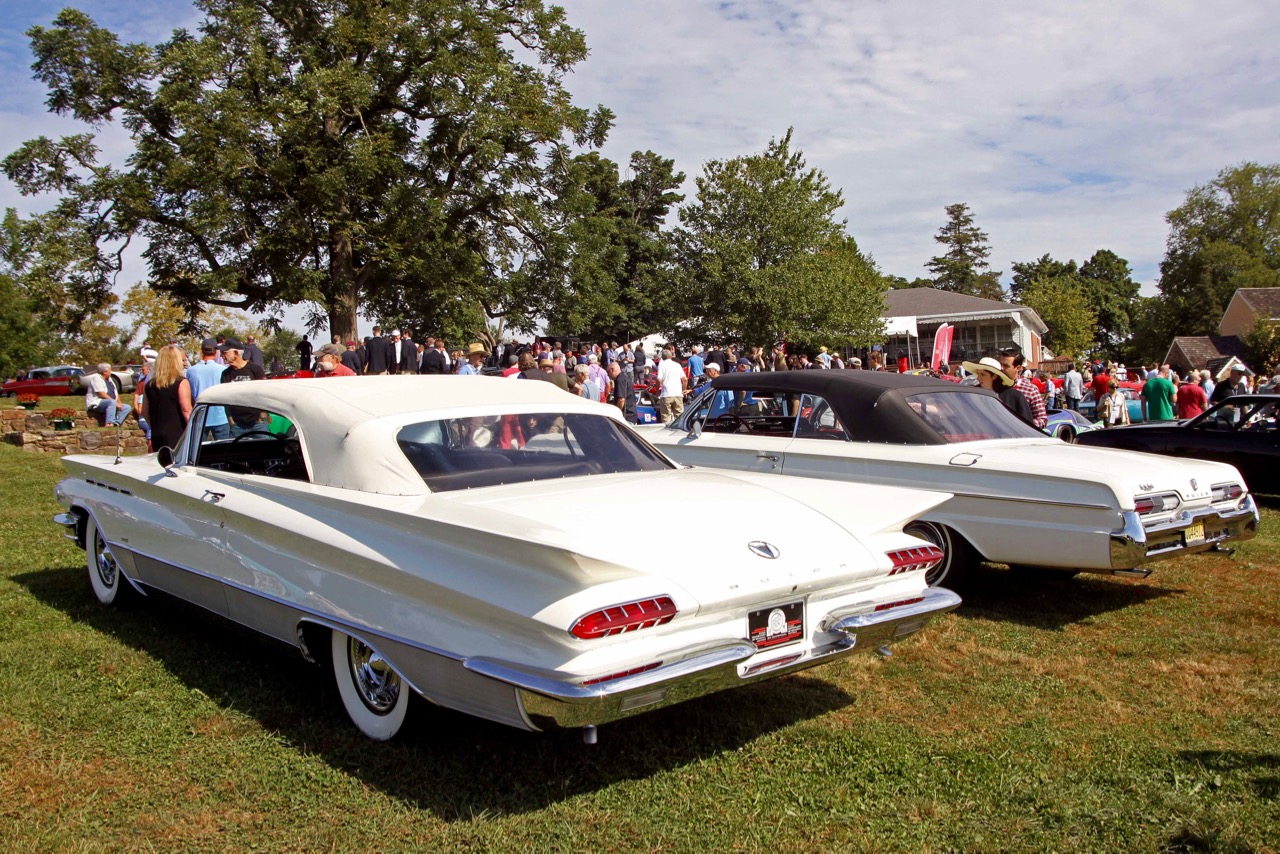 Take this shot in for a moment: Two Buick convertibles in an idyllic setting bathed in bright sunlight and you get a better idea of why the Radnor Hunt Concours is a great way to spend a Fall afternoon. Closer is Richard Sills’ ‘60 Electra 225 convertible. Originally constructed for Buick General Manager Harlow “Red” Curtice by GM Styling, it has numerous custom touches as a restyled rear, distinctive Buick emblem and stylized Ventiports. Behind it is Ronald Rinaldi’s ‘62 Invicta, a very original, much honored example (AACA Senior Car & Gold Senior Car with the Buick Club of America). 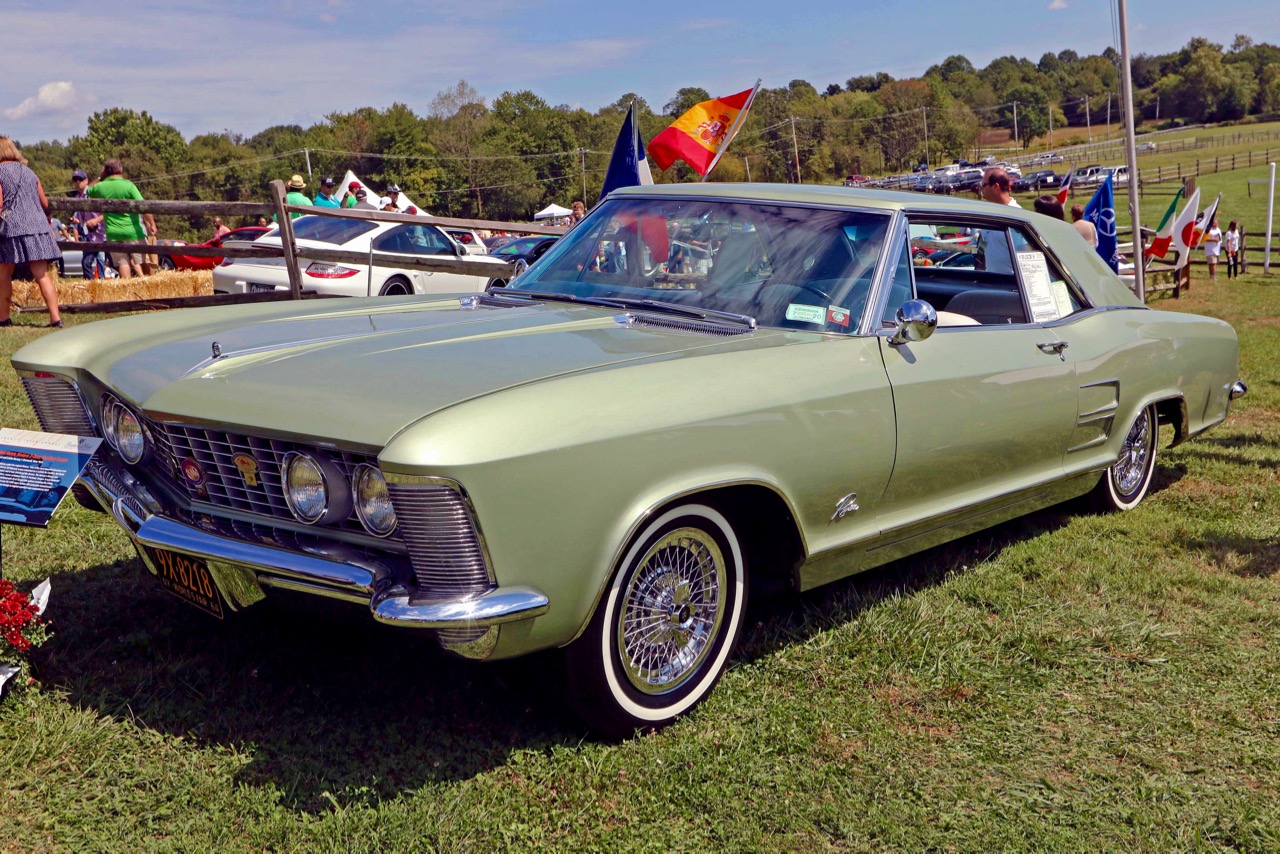 Ford owned the personal luxury space in the marketplace with its Thunderbird for a considerable time. That was until Buick introduced its Riviera. Styled by Ned Nickles based on a concept from Bill Mitchell, the Rivera would be called “one of the most beautiful American cars ever built” by no less a styling luminary than Sergio Pininfarina. Linda & Richard Harvey’s ‘64 example was originally built for a Buick dealer. Its window sticker lists 30 separate options and is accompanied by an additional sticker detailing a dozen more dealer-installed options. 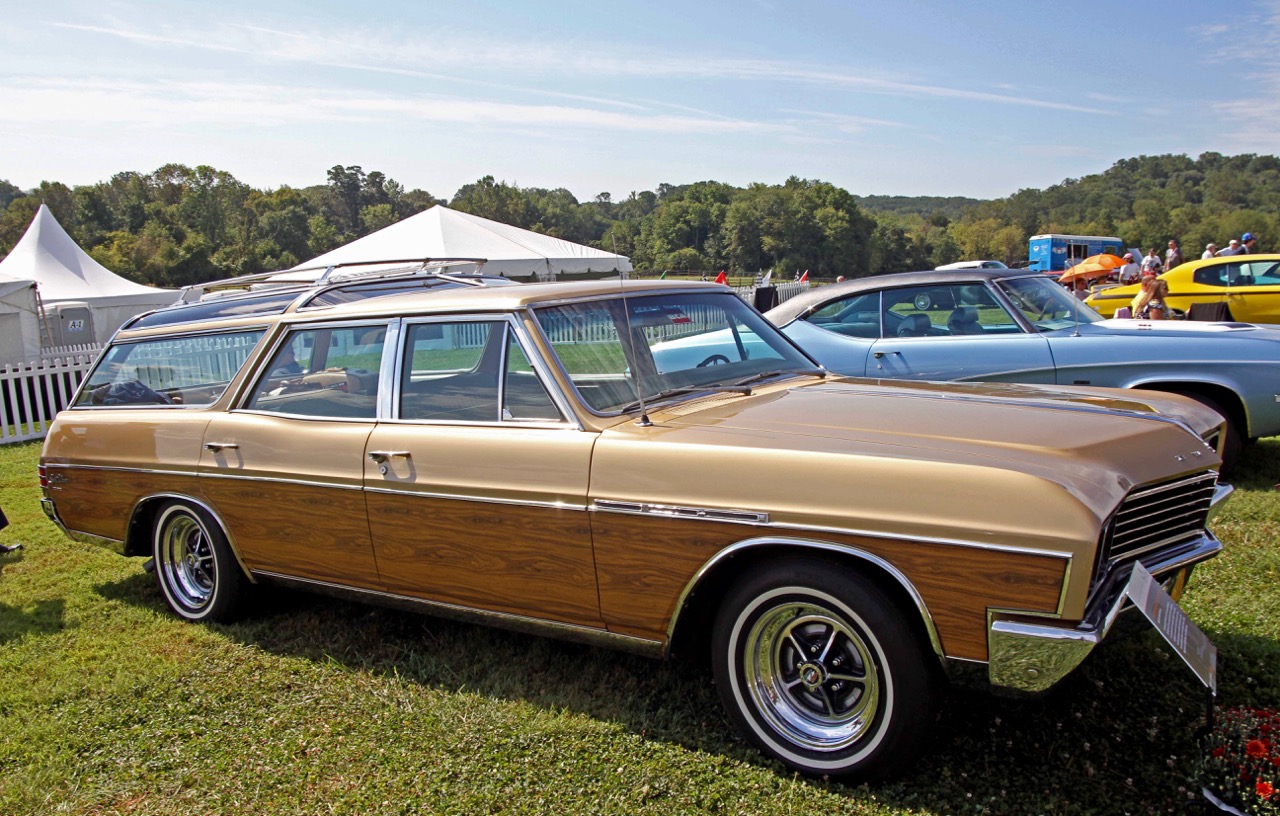 Replaced by the minivan and the SUV, there is still something very nostalgic about a station wagon. These were the family haulers of the Baby Boomers. Many remember those long vacation trips ensconced in these. Despite the name SportWagon, they exhibited little of the performance or allure of their hardtop and convertible siblings. Stanley Sipko’s ‘67 example sports GM’s “Vista-Glass Skyroof” which raised the rear bodywork and installed windows to expand and brighten the interior. 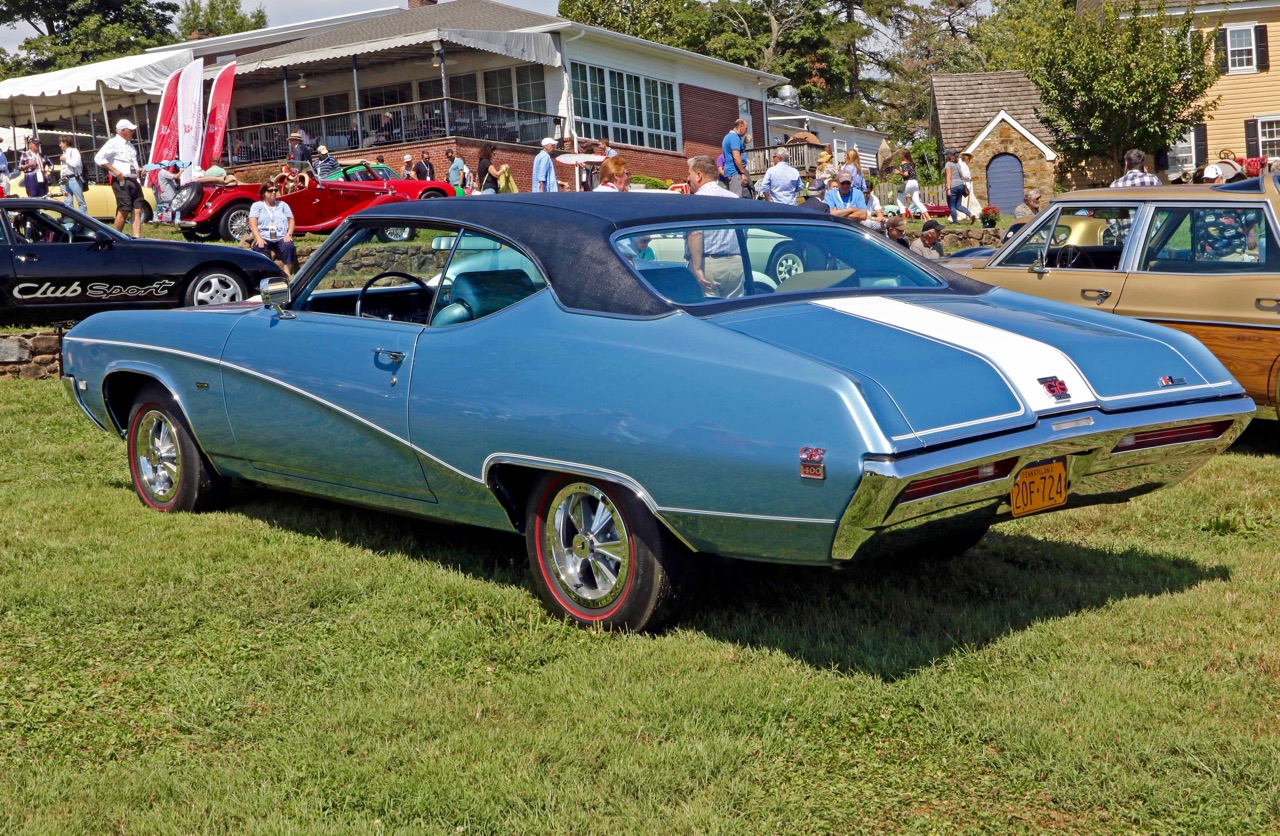 New York’s Motion Performance is best known for its 427 & 454 Baldwin-Motion Chevys. Less well known is its work on other makes. A full-service speed shop with a Clayton dyno, Motion modified just about any nameplate back in the day. Duane Heckman’s ‘69 Buick GS400 coupe sports Motion goodies. Outside you see Motion badging, body stripes and performance wheels and tires. Under the hood is a much-modified 400-inch Buick V8 pushed to over 430 horsepower. 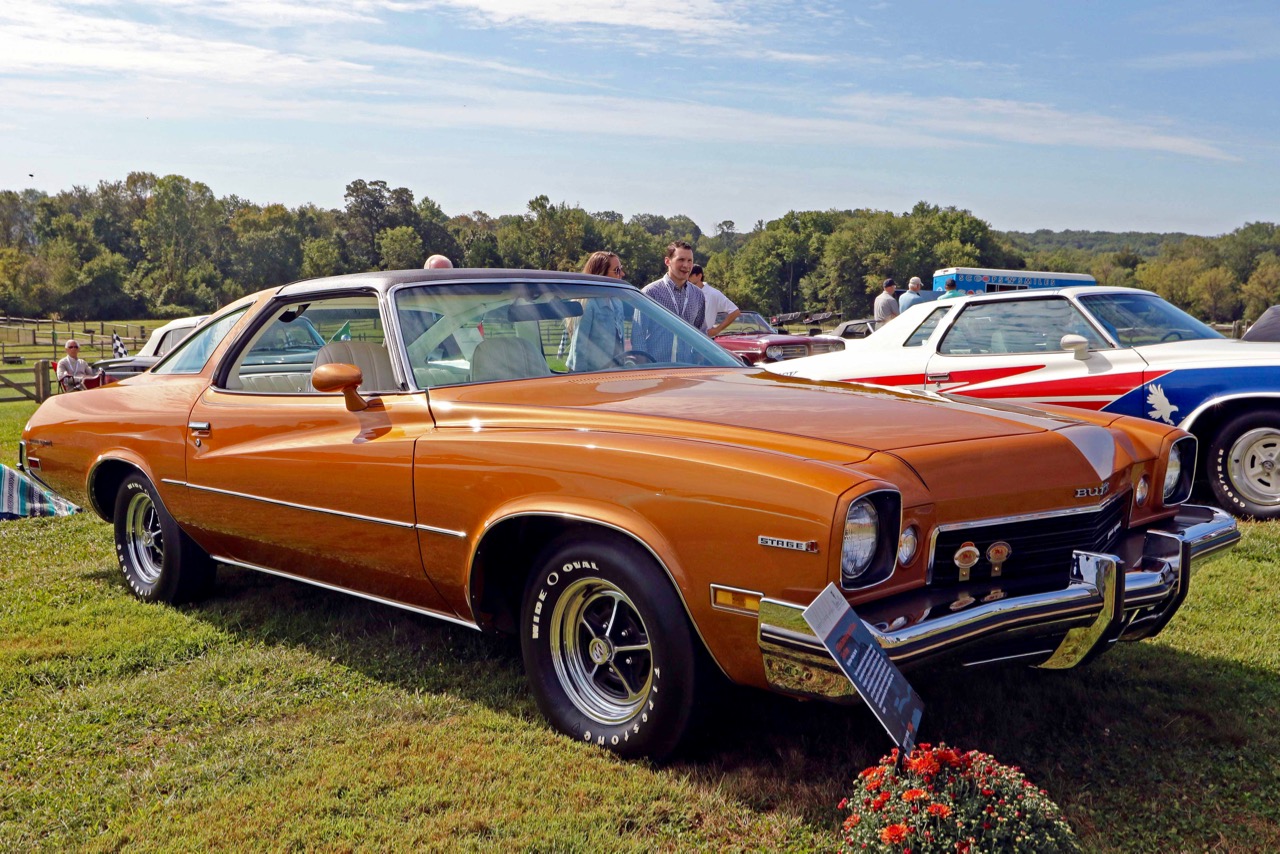 The American Muscle Car era died a slow death at the hands of emission controls, rising insurance rates and the Arab Oil Embargoes. Buick ushered out the era with its ultra-quick ‘73 Century Gran Sport 455 Stage 1. Phil Roitman’s GS is a fitting tribute to this last-of-the-line effort. Sporting a four-speed and Stage 1 455-inch engine, it served as a dealer demo. Roitman has another ’73 GS455 Stage 1 Century that he actively drag races. 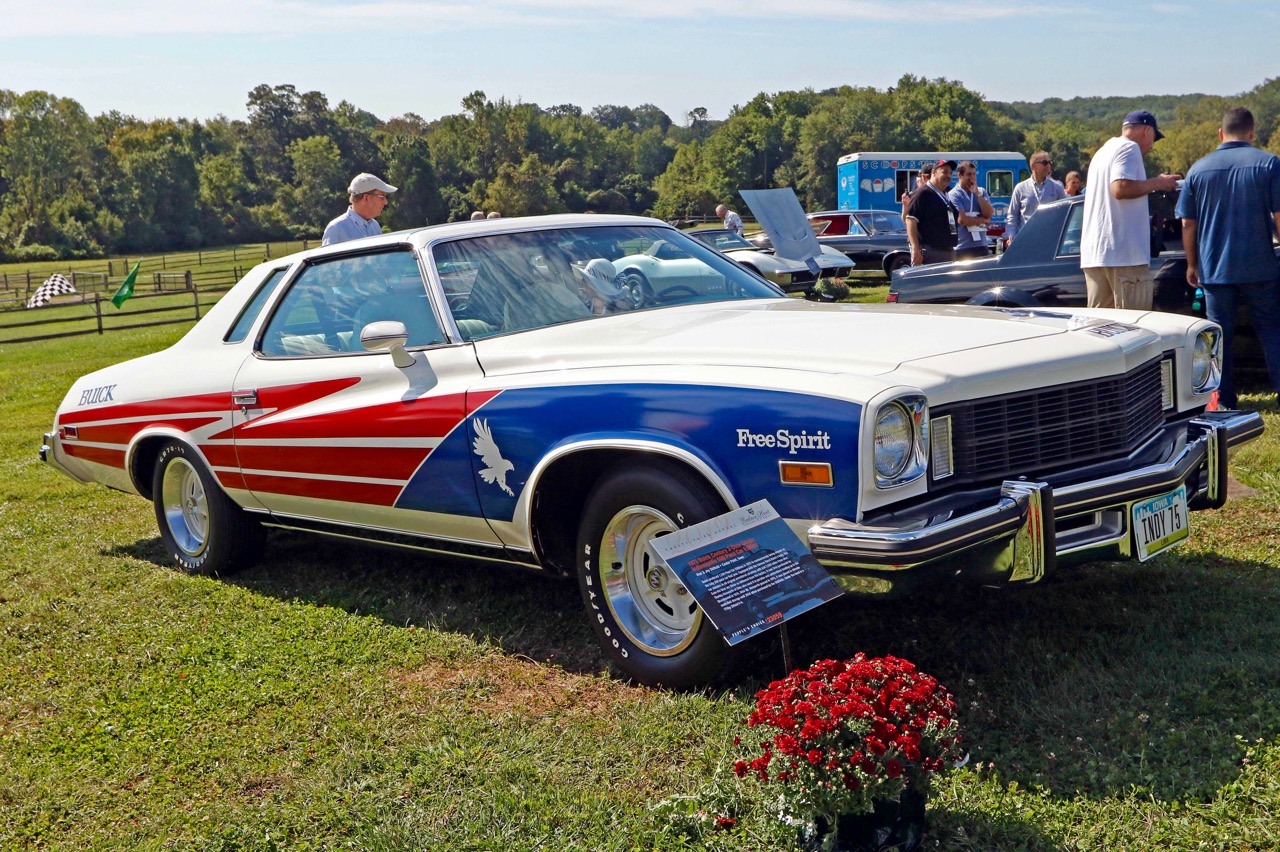 By 1976, Detroit’s idea of performance was stickers, badging and striping! That year, Buick was selected as the Indy 500 Pace Car. To celebrate, they sold about 1,300 versions of this car, which were little more than a bedazzled standard Buick coupe. Launched in America’s Bi-Centennial year, it was purchased to participate in parades and other outings by its original owner. Following his passing, it sat in storage until being acquired by Joy and Alan Oldfield in 2004. Displaying just 3,000 original miles, it is something of a time capsule. 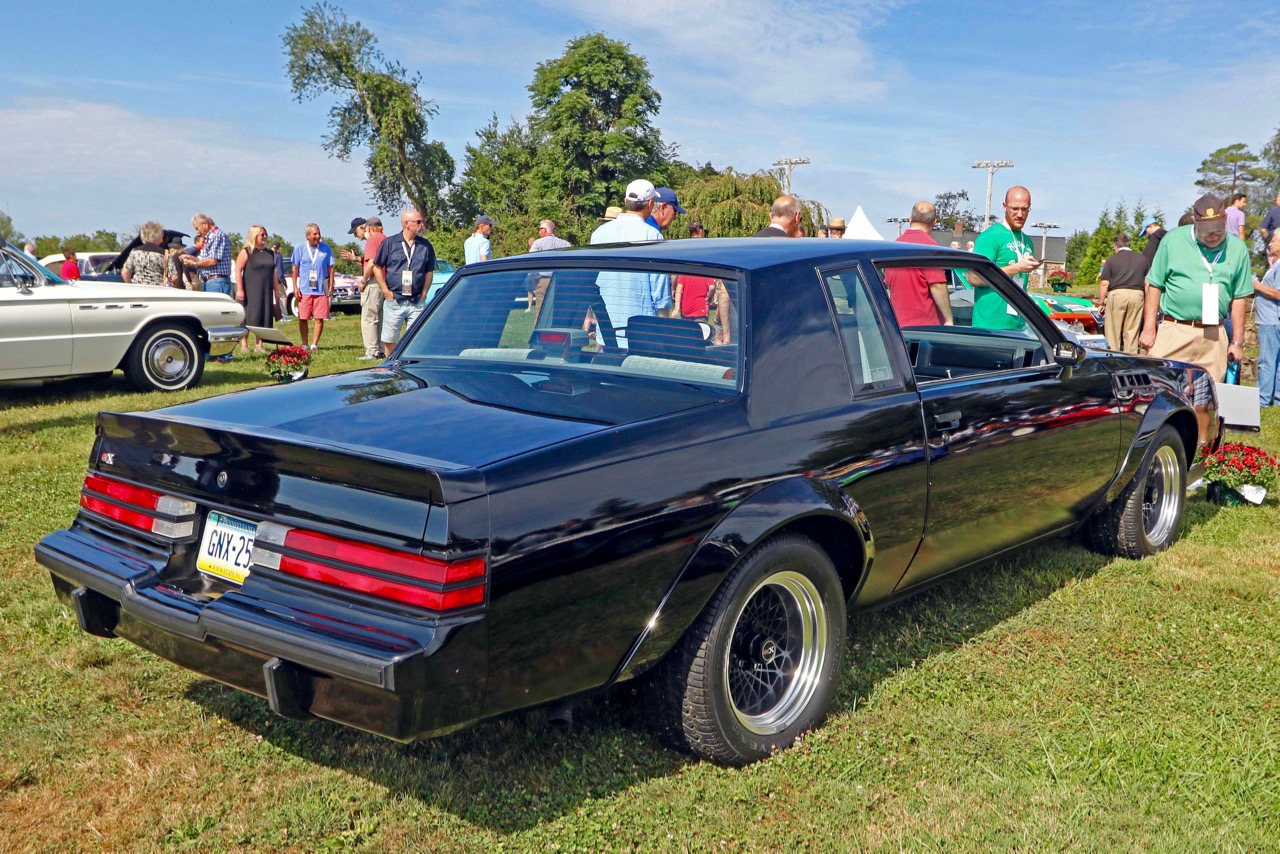 As the 1980s drew to a close, performance returned to fashion in Detroit. Buick turned to outside suppliers ASC (American Specialty Cars) and McLaren Performance Technologies to help create the GNX. Based on an ’87 Grand National, power for the GNX came from a modified, intercooled, turbocharged V6 pushing through a four-speed automatic transmission. Visually the car used an all-black color scheme over the lines of its RWD “G” body to state its purpose. The results recalled those bygone days of 1960s-era performance. It was the quickest production car in 1987, posting superior quarter-mile times than Corvettes, Mustangs, Camaros and even Ferraris. Unlike any other GM car that year, it was saddled with a Gas Guzzler tax! Ron Mukalian’s GNX is one of 547 built and is a survivor, displaying a little over 1,000 miles on its odometer.

The Radnor Hunt Concours is one of the premier events on the enthusiast automotive calendar. For more information, please visit https://radnorconcours.org/