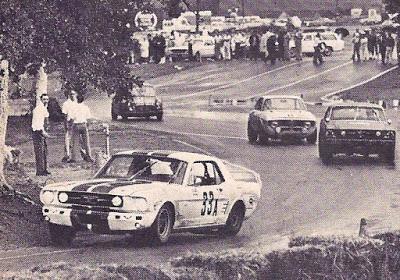 John McComb ordered a new car for 1967. The choice was easy. Given his success in the 1966 Group 2 Mustang, he ordered a new notchback for 1967 to pick up where he left off with the Shelby program. The ‘67 Mustang was the model’s first major redesign and the car gained both size and weight. McComb didn’t care for either.

“Even though the ’67 car had a wider track, it was a heavier car, so I don’t really think the wider track helped,” McComb said. “The ’66 car was just a very reliable, quick car. I always thought the ’66 was better than the ’67 anyway.“ 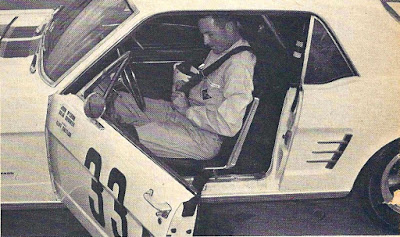 While awaiting delivery of the new car, McComb pulled his old mount out of the garage to start the new season. It still ran strong, competing at the Daytona 300 Trans-Am race on February 3, 1967 and in the 24 Hours of Daytona the following day. In March, McComb returned to familiar grounds and took second in the amateur A/Sedan race at Green Valley, and again participated in the Trans-Am event the following day. The car’s final race under McComb’s ownership was the Trans-Am at Mid-Ohio Sports Car Course on June 11th.

His new racecar became available just days later and McComb sold the #12 Group 2 Mustang to Keith Thomas, a Kansas native who had shown considerable ability winning club races throughout the region. Thomas campaigned the car against stiffening competition in the A/Sedan Midwest Division, ironically finishing second in the championship hunt only to John McComb’s new car.

This gave the #12 Group 2 Mustang a unique place in road racing history. Not only did it claim a share of John McComb’s A/Sedan championship by scoring points for McComb early in the 1967 title chase, but it also clinched second place in the same series in the hands of Keith Thomas. By virtue of Thomas’ runner-up standing in the series, the car earned a second invitation in the AARC at Daytona where it scored yet another top five finish. 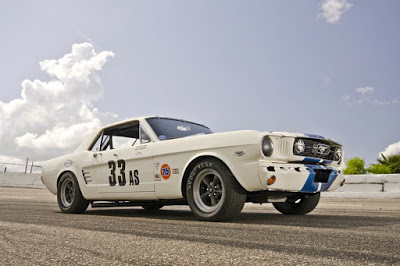 Keith Thomas continued driving the #12 Group 2 Mustang in 1968 and 1969, finishing third in the series both years. Although the car was now well past its prime, Thomas set a new A/Sedan track record while winning at Wichita’s Lake Afton Raceway. He continued to rack up wins at places like Texas International Speedway, Oklahoma’s War Bonnet Park and the SCCA Nationals at Salina, Kansas throughout the late-1960s.

Now sporting a new livery, the car ran a limited schedule from 1971-73, after which it was retired from auto racing. The car traded hands later that year and again in 1978, each time distancing itself a bit more from its proud past while being repeatedly repainted and renumbered. Finally, in 1984, the car came into the possession of car collector Gary Spraggins. By this time its true identity had been lost and Spraggins was unsure of its provenance. He bought the car anyway.

Spraggins recalled that the Mustang had been repainted in “school-bus yellow” with black Le Mans stripes. There were no Shelby markings to be found anywhere on the car, but still Spraggins suspected that the vehicle might be something special. He noticed several items that were unique to Shelby GT350Rs, including the Cobra intake manifold, the Holley 715 carburetor and the A-arms that had been relocated to lower the car by one-inch. Mechanically, everything about the car screamed “Shelby” although no one really knew for sure.

The moment of truth came when Spraggins took the car home for a closer inspection. “When I raised the trunk lid up, of course, the inside of the trunk area was black, but you could see the Le Mans stripes overspray down in there,” Spraggins remembered. 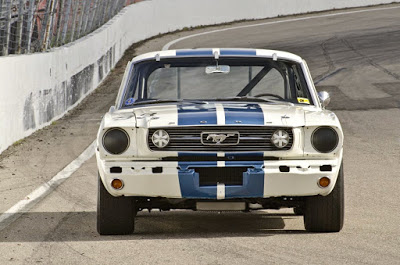 “Oh, man, I knew what those colors represented – Shelby cars. And I got some paint remover and lightly put it over the black Le Mans stripe on the trunk and wiped it off, and there was the prettiest blue Le Mans stripe there. It’s like, oh, my gosh!”

Spraggins immediately wrote to the Shelby American Automobile Club, describing the car and asking if the VIN could be verified as a Shelby product. The response came on November 12th.

“Looks like you’ve found one of the original Shelby 1966 Trans-Am cars,” the letter began. “Your car was originally sold to Turner Ford in Wichita, KS. I think they may still be in business…”

SAAC national director, Rick Kopec, signed the letter. And so did Carroll Shelby.

Spraggins could barely contain his enthusiasm and quickly set to work restoring the car to its original 1966 livery and condition, not realizing that an aging John McComb had also entertained the idea of finding his old mount. He just didn’t know where to look.

“I was very excited at that time that I had found a needle in a haystack,” Spraggins said. “Nobody knew anything about these cars, so in order to track down the original driver – you know, John McComb – I just started calling information in the Wichita area.” 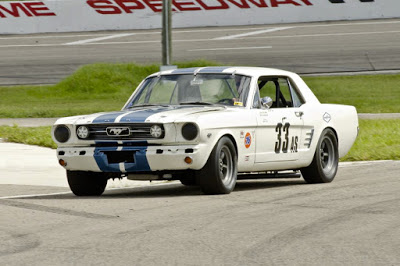 On a hot summer afternoon in late-July 1985, the telephone on John McComb’s desk rang again. On the other end was car collector Gary Spraggins calling with the surprising news that his famous #12 Group 2 Mustang had been found. When McComb saw photos of the newly restored Mustang, he said, “My immediate reaction was, ‘That’s my car!’ What a super job you have done on it.”

When asked to critique the restoration and help them convert the car to its precise 1966 condition, McComb confessed to a pair of secrets that he’d kept for nearly 30 years.

“We cheated in two places on the bodywork. One was on the lower front valance where the license plate goes. We took those two little tabs off and opened it up a little. We also opened up the front fenders just a little. We rolled the inner lip around a welding rod to give it more strength for nerfing. We never got caught on either one.”

Eventually, even Carroll Shelby was reunited with the newly restored #12 Group 2 Mustang at a car show in the mid-1990s. He recognized it instantly. “This was the last year I was really interested in racing,” he lamented to Mustang Monthly.

“We had won Le Mans in 1966 and then the Trans-Am series came along. A lot of our good guys had moved on to other things because we had been winning for so many years.”

When it came to North American road racing, the Group 2 Mustangs were Shelby’s last stand. Largely forgotten by car collectors worldwide, these amazing racecars won the first Trans-Am title for Ford and were among the most dominant sportscars their era. They left an indelible imprint on the American road-racing scene of the 1960s. Then they simply disappeared.

Standing at the car’s freshly repainted rear fender, Shelby crossed his arms, took one last glance at the #12 Group 2 Mustang and gave a long sigh. “After 1966, we were concentrating on building volume. Unfortunately, the racing programs didn’t have much priority after this.”

NOTE: All photos are courtesy of Mecum Auctions. The driver in the cockpit photo is owner/driver John McComb preparing for a race in the late-1960s.

Stephen Cox is a racer and co-host of TV coverage of Mecum Auctions (NBCSN), sponsored by: http:/www.mcgunegillengines.com/   http://www.boschett-timepieces.com/index.php