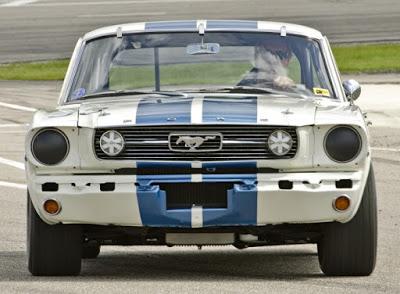 On a hot summer afternoon in late August 1966, the telephone on John McComb’s desk rang. On the other end was automotive design engineer Chuck Cantwell of Carroll Shelby’s legendary racing shop, calling with the surprising news that Shelby had a Mustang Group 2 racecar for sale.

McComb was delighted since his prior inquiries at Shelby had been met only by rejection. He had raced MGB sports cars for years but his first taste of Ford V-8 power came while driving Peter Talbert’s notchback Group 2 Mustang earlier that summer in the Trans-Am event at St. Louis. McComb and Talbert were leading the race until an exhaust pipe came loose, forcing them to settle for third place. But McComb was already hooked. The car was more powerful than anything he’d ever driven. He wanted one of those Mustangs.

In the summer of 1966 McComb had called Shelby American to purchase his own Group 2 Mustang, only to be told by Cantwell that none was available. Only 16 would be built that year and all were spoken. That was  until an odd and tragic coincidence occurred. Ford race driver Ken Miles, for whom one of the coveted Group 2 Mustangs had already been reserved, was killed in a practice crash at Riverside International Raceway on August 17, 1966. 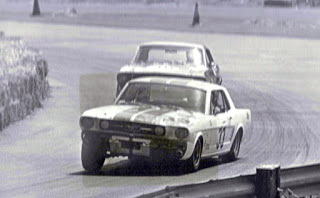 A few days later McComb became the new owner of a Shelby-built Group 2 Mustang. It was designated chassis #12 by Shelby American. Although it would compete with various race numbers painted on its door over the years, the car would be remembered as chassis #12 of only 16 Group 2 notchbacks built in 1966. It was one of the rarest Shelby Mustangs built.

The previous winter, officials at the Sports Car Club of America had announced the formation of two new national championships for sedans. The first was to be an amateur series comprised of more than 50 events culminating in the American Road Race of Champions Invitational. The second was the Trans-American Sedan Championship, later known simply as Trans-Am.

Ford Motor Company, in the midst of its famed Total Performance program designed to dominate every aspect of auto racing, took an immediate interest in the new series. Shelby’s Mustang GT350 was the perfect choice for competition. It was a proven, off-the-shelf racecar ready for action. Unfortunately, it was a rear seat delete car that had already been homologated for B/Production
class racing. The Trans-Am series would require four seats, original glass and a steel hood.
The GT350 wasn’t eligible.

Ford took their problem to Carroll Shelby, whose team chose to simply re-apply most of the GT350 fastback’s modifications to another model of Mustang rather than re-invent the proverbial wheel. The Mustang GT notchback was selected as the base car for the new Group 2 racer and Chuck Cantwell’s team went to work. 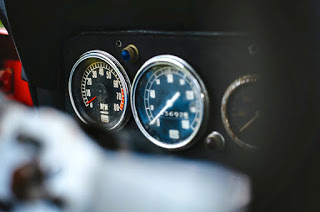 All 16 of the cars that would eventually become 1966 Group 2 notchbacks were delivered from the factory in a Wimbledon White paint scheme, with GT fog lamps and black interiors. They were equipped with 289/271 engines, 3.89 rear ends and four-speed transmissions. And most importantly, all carried a Ford-designated vehicle identification number. Ford intended to win the Trans-Am manufacturer’s title and did not want their Mustangs mistaken as aftermarket products from Shelby American.

Once in Shelby’s hands, the Group 2 notchbacks were race-prepared in virtually the same manner as the GT350R, making them mechanical mirror images. The first Group 2 car was tested at Willow Springs International Raceway and found to be nearly as quick as the GT350R despite the fact that the notchback configuration carried a significant aerodynamic penalty compared to the more slippery fastbacks.

On Monday, August 29, 1966, John McComb took delivery of his new Mustang in Wichita, Kansas. He raced it the following Saturday at Continental Divide Raceway in Castle Rock, CO.

The car was fast. Too fast, it seemed, for its new owner. McComb found himself engaged in a bitter struggle with the Dodge Dart of Ron Grable – the eventual national champion – as well as with his own racecar.

The Group 2 Mustang produced far more horsepower than anything McComb had ever driven. He struggled badly in Turn 4, the slowest corner on the circuit, and failed to garner any real speed along the backstretch. He could catch Grable, but he couldn’t find first gear quickly enough to pass him.

“It wasn’t the car’s fault, it was the driver,” McComb recalled. “It was so much car for me that making the shift for the turn coming onto the straightaway, getting it down into first gear, was more than I could do.”

With only two laps remaining in the event, McComb rolled the dice. He revved the engine hard in the center of Turn 4, forced the shifter into first gear and popped the clutch at nearly 6,000 rpm.

It worked. He was finally able to tap the incredible torque of the Shelby-tuned 289 engine that produced some 370 horsepower on the dyno. In spite of the high revs and the less-than-graceful downshift, the engine held together. McComb’s little Mustang rocketed out of the turn like a meteor and sailed past Grable’s Dart. He did the same thing again on the final lap and won the race by 20 car lengths!

It was an upset victory in every sense of the term, but the greatest upset of all was yet to come. (Part 2 of 3 will be featured in the next Stephen Cox Blog).