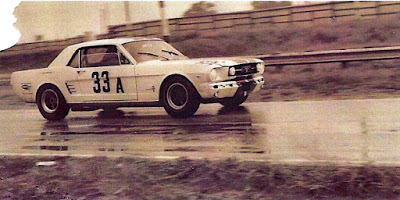 The next weekend John McComb was racing again. The Trans-Am Series Six-Hour Pan-American Endurance Race was to be held at Green Valley Raceway in Texas. The sanctioning body mandated a second driver for each team due to the length of the event. McComb chose veteran Brad Brooker, a successful club racer who had logged plenty of miles in the Group 2 notchback’s nearly identical twin, the Shelby GT350.

Run entirely in a downpour late on Saturday evening, September 10, 1966, the Pan-American race would become an epic battle that still stands as the #12 Group 2 Mustang’s greatest triumph. 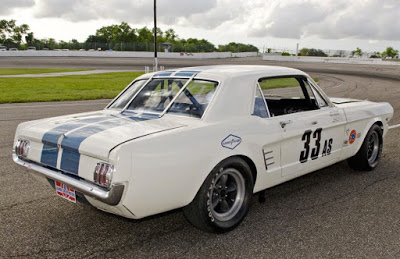 Built in 1959 and sold for housing development in 1983, Green Valley Raceway was a glorious tribute to the golden age of American road racing. The main straightaway, which doubled as a drag strip, offered plenty of racing room while the backstretch, which doubled as the return road for dragsters, was far too narrow. The two straights were barely 20 yards apart and – unbelievably – there was no guardrail separating the two!

A massive hump on the main straightaway would occasionally send the faster cars airborne. So while cars on the front stretch were lifting all four wheels off the ground, cars along the backstretch would hit blistering speeds of more than 100 mph in the opposite direction just a few feet away.

The attitude of the race fans was equally liberal. Old photos still exist showing a mother and her children sitting on a picnic blanket only yards from the Green Valley track surface with no fence, rail or safety barrier to protect them. On the other side of the course, three inventive race fans set up shop along the fastest part of the main stretch. They parked their station wagon just yards from the track surface, erected a six-foot construction scaffold, leaned a ladder against it and watched the weekend’s activities from atop their new perch. 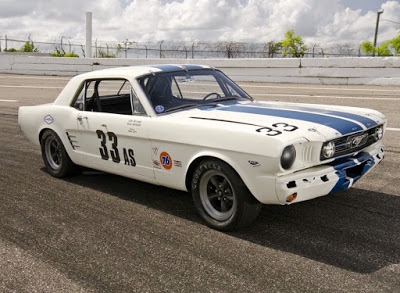 This was American road racing at its peak and any airfield, drag strip or country road could be turned into an instant racetrack. Such innocent enjoyment would be outlawed in later years, but in the autumn of 1966, no one worried over such things. People just showed up and watched the race as they pleased in true liberty, and the sport blossomed as a result.

McComb arrived at Green Valley Raceway to find the course lined with trees that created a haven for spectators but a constant menace for drivers. During a practice session the day before the Pan-American race, Russ Simon’s Alfa Romeo went off course and wrapped itself neatly around one of them. What remained of the Alfa was slowly towed down the backstretch under a red flag, serving notice to other drivers that this track was raw and unforgiving. 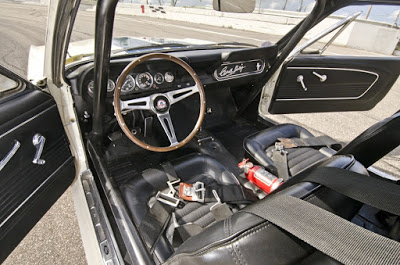 McComb also found that Ford had unpleasantly targeted him and other Mustang privateer teams. Fearing that a private team might take the Trans-Am title, Ford directed Shelby-American to prepare their latest version of the notchback Group 2 Mustang and enter it in the race to ensure that a factory-backed team clinched the title. The Ford-backed Shelby car was to be driven by Don Pike and John Timanus.

Rain was still falling when the race began on Saturday afternoon at 4 pm. There wasn’t a dry spot on the entire circuit and the first accident occurred early in the show. Gary Dundas’ Mustang got caught up in the Turn 1 spin of Ruben Novoa’s Mustang, taking two Fords out of the race at once. Fortunately, the McComb/Brooker Mustang had gotten a good start and was running in third, well ahead of the wreck.

The field strung out even further after a lapped car suffered a punctured fuel tank and dumped a full load of gasoline on the backside of the course. The fuel mixed with rainwater and created a disaster area, sending six more cars off course.

By 7 pm the rain had become a light drizzle and cars were scurrying around the track in near darkness by the dim, yellow light of their headlamps. The track remained wet and most competitors were still using their wipers to clear road spray from their windshields. The crowd had thinned. Those who remained were donning jackets to stay warm.

Attrition eventually began taking its toll even among the fastest cars. The Ford-backed Shelby Mustang of Pike and Timanus was black-flagged while leading after its brake lights failed. The team lost several laps and fell out of contention, moving McComb and Brooker up to second.
Shortly afterward, the Plymouth Barracuda of Charlie Rainville and Bob Johnson made an unexpected pit stop to work on the throttle linkage and brake system, defaulting the lead to McComb, who had by this time distanced himself from the rest of the field. 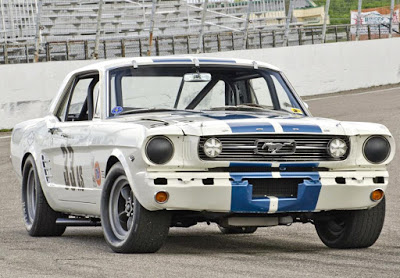 McComb’s #12 Group 2 Mustang ran solidly in the top three all day and went on to win the race by a six-lap margin over the second-place Alfa Romeo of Horst Kwech and Gus Andrey. It was a dominating win in a premier racing series against top-notch competition, including Ford’s own factory-backed effort. It was considered another upset victory for McComb’s Mustang, a win of sufficient importance to convince Sports Car Graphic to feature the #12 Group 2 car on the cover of their December 1966 issue.

Ford was impressed despite the fact that a privateer team had beaten their own entry. The win scored enough points to place the company in a dead heat with Plymouth for the Trans-Am Manufacturer title, which Ford would clinch a week later at Riverside. 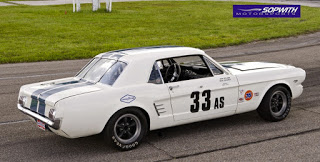 By the end of 1966, McComb’s Mustang figured prominently in American sedan racing. It earned an invitation to the 1966 American Road Race of Champions, an event reserved only for the nation’s top racing teams.

But the car’s legacy was already secure. The #12 Group 2 Mustang had scored surprising wins at Continental Divide and Green Valley in only its first two races. And more importantly, it had established its place in auto racing history by positioning Ford for its first Trans-Am championship.

Stephen Cox is a racer and co-host of TV coverage of Mecum Auctions (NBCSN), sponsored by: http:/www.mcgunegillengines.com/
http://www.boschett-timepieces.com/index.php