Skip to content
Aston Martin built just two iconic DBR2 racecars; currently valued in excess of $5 million. This spot-on aluminum-bodied Tribute was handcrafted in the U.K. and, unlike the original, is only street-driven. 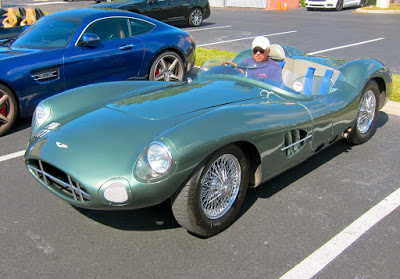 Archie Urciuoli has owned and raced British sports cars since the 1950s, including XK-140 MC and E-Type Jaguars and a Lola T70 Spyder and D-Type Jaguar racecars, This is his first Aston Martin and he has no plans to race it. It’s one of his drivers. He retired from historic road racing competition a few years ago.

The Aston Martin DBR2 was the successor to the Newport Pagnell company’s original and highly-successful DBR1 racecar. The DBR2 incorporated a number of improvements, including (ultimately) an aluminum block 4.2-liter DOHC Six, with twin-plug head, three dual-choke Weber 50 DCO carbs and dual coils and distributors. It developed in excess of 300 horsepower. It weighed approximately 2,000 pounds. 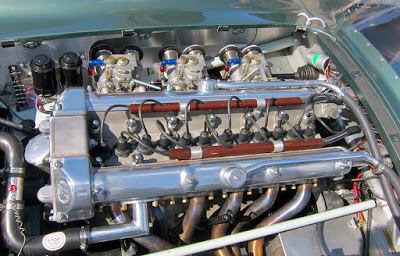 Power is transmitted through a David Brown DB4 GT four-speed gearbox to a DeDion rear end. The front suspension utilizes torsion bars and Girling disc brakes are used fore and aft.  It was the last open Aston Martin raced by the factory for 50 years, and scored numerous victories at the hands of drivers such as Sterling Moss and George Constantine. 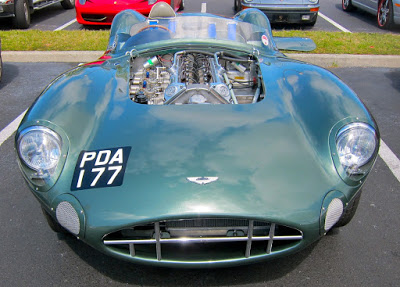 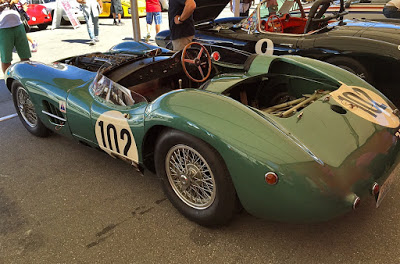 Both DBR2s were factory-campaigned “works” racecars and the first one was driven by Peter and Graham Whitehead at the 1957 24 Hours of Le Mans. It did not finish due to oil-leak issues. The second DB2/2 was more successful. Roy Salvadori drove it to victory at Silverstone. Stirling Moss won the Sussex Trophy race at Goodwood and followed it up with a win at the British Empire Trophy race at Oulton park. In the U.S., DBR2/2 posted a win at Riverside Raceway, followed by wins in 1959 at Nassau Speed Weeks with Moss and George Constantine driving. Original DBR2/2, owned and raced by Gregory Whitten, above, in the pits at Laguna Seca, photographed by Stuart Schorr. 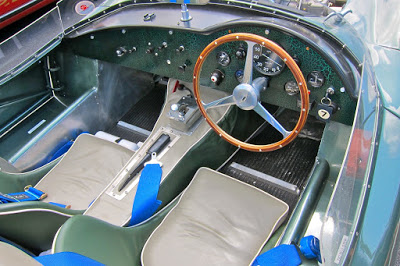 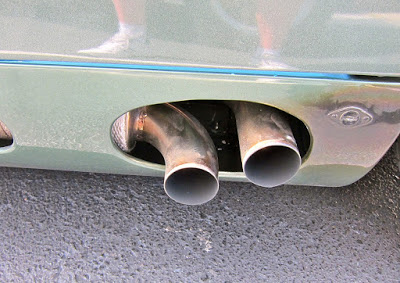 Aston Martin built two DBR2 factory racecars and both have survived. This faithful DBR2 replica was constructed in the U.K. by Aston Martin aficionados, Jonathan Dormer and Andrew Soar, on an ARA Racing chassis. Chapman Classic Panels fabricated the aluminum body. After Archie Urciuoli purchased it in 2016, it was mechanically upgraded to conform to original ’57 DBR2 specifications by Jon Clerk and Lance Evans, Aston Martin specialists at Steel Wings, Warminster, PA. http://www.steelwings.com/ 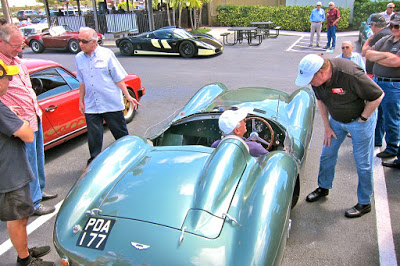 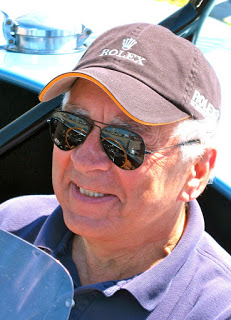 Archie is involved with The International Motor Racing Research Center (Watkins Glen), a board member of the prestigious RRDC (Road Racing Drivers Club) and one of the founding members of the Sarasota Café Racers.