Author-historian-engineer Karl Ludvigsen’s seminal tome on the history of Porsche and its road and track cars is now available in a unique four-volume mobile library. 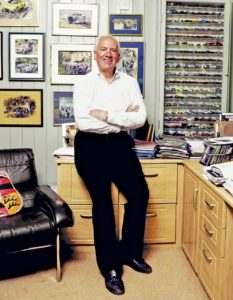 First seen in 1977 as a shoebox-shaped 888 pages, it was judged “amazing”. Relaunched in three volumes in 2003, it was found “astounding”. Now in four volumes released by Bentley Publications with 132 chapters and 2,834 pages, the new Porsche: Excellence Was Expected awaits the verdict of its global audience.

The result of a dozen years of research, interpretation and writing by Karl Ludvigsen, left, the new Excellence is profoundly transformed. “I decided that no mere update would meet the demands of the modern reader,” said Ludvigsen. “Porsche’s story is one of dramatic transformation and revival, mandating a 21st-century perspective written virtually from scratch. No paragraph of the original book escaped improvement.” 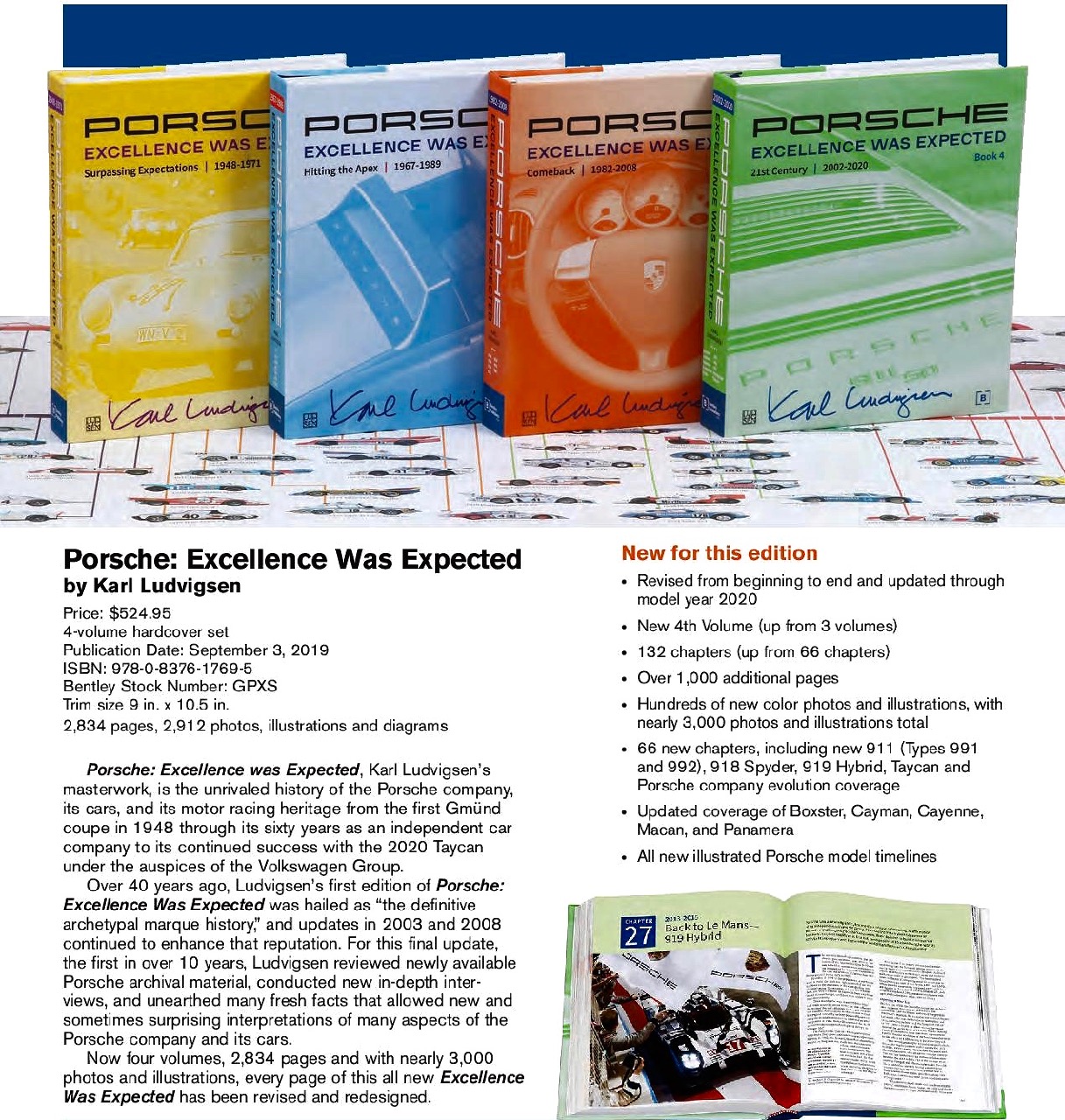 “What’s remarkable about Karl’s approach,” said Bentley president Michael Bentley, “is that he tells not only what and where but also why, how and by whom. In addition to the facts of each new Porsche model or update he explains its background, its motivation and often the changes that weren’t made—and why. Every chapter is a riveting and revealing read.” 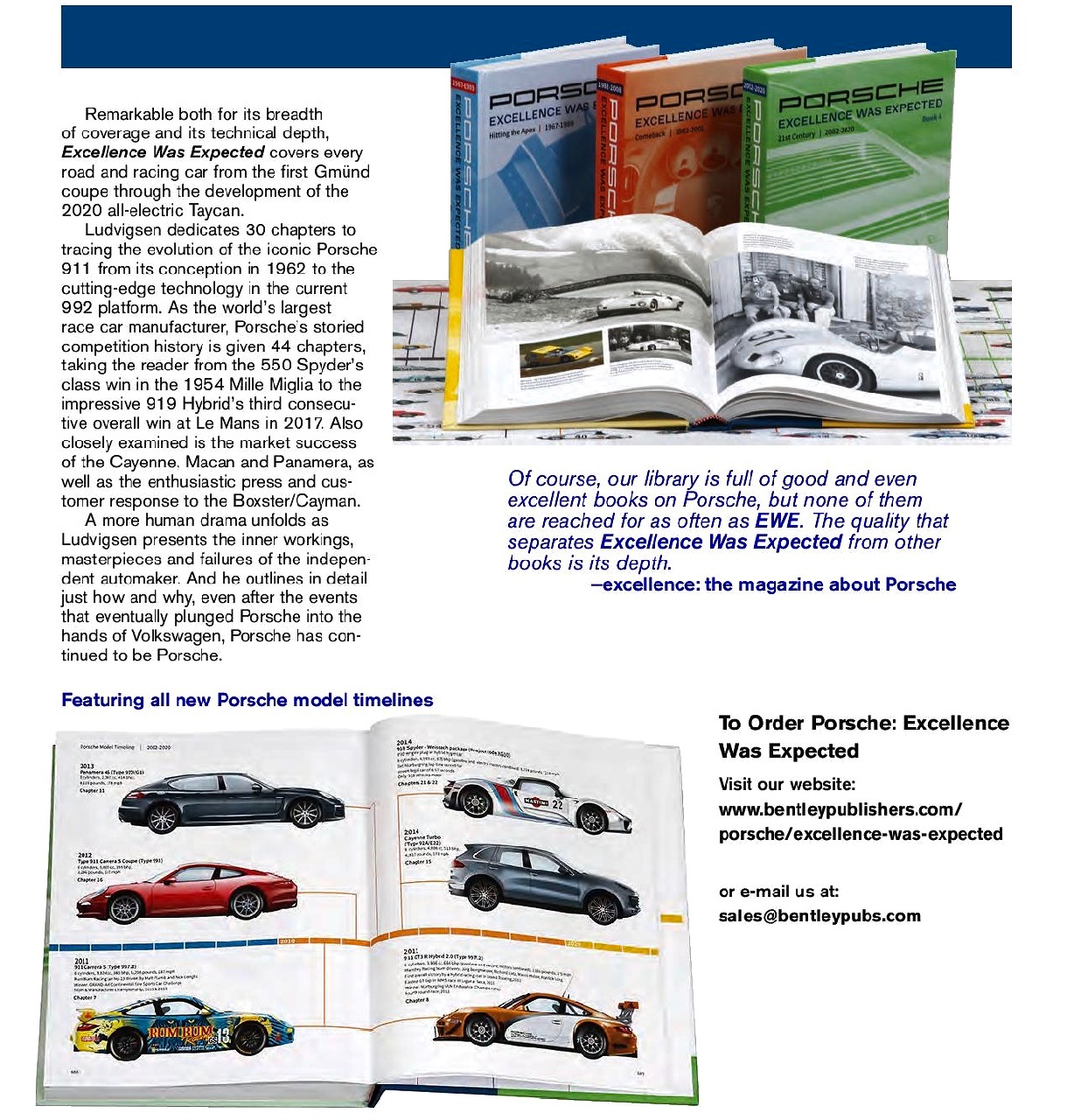 “I set out in 1974 to tell the whole story of the amazing Porsche company,” Ludvigsen explained, “not just the cars. It’s the saga of a family that became a dynasty and a company that expanded from sheds in Austria to the world’s most profitable car-making multinational. Bumps along the way were the near-death late 1970s, a dealer fiasco in America and an epic corporate struggle with Volkswagen that ended amazingly well.” 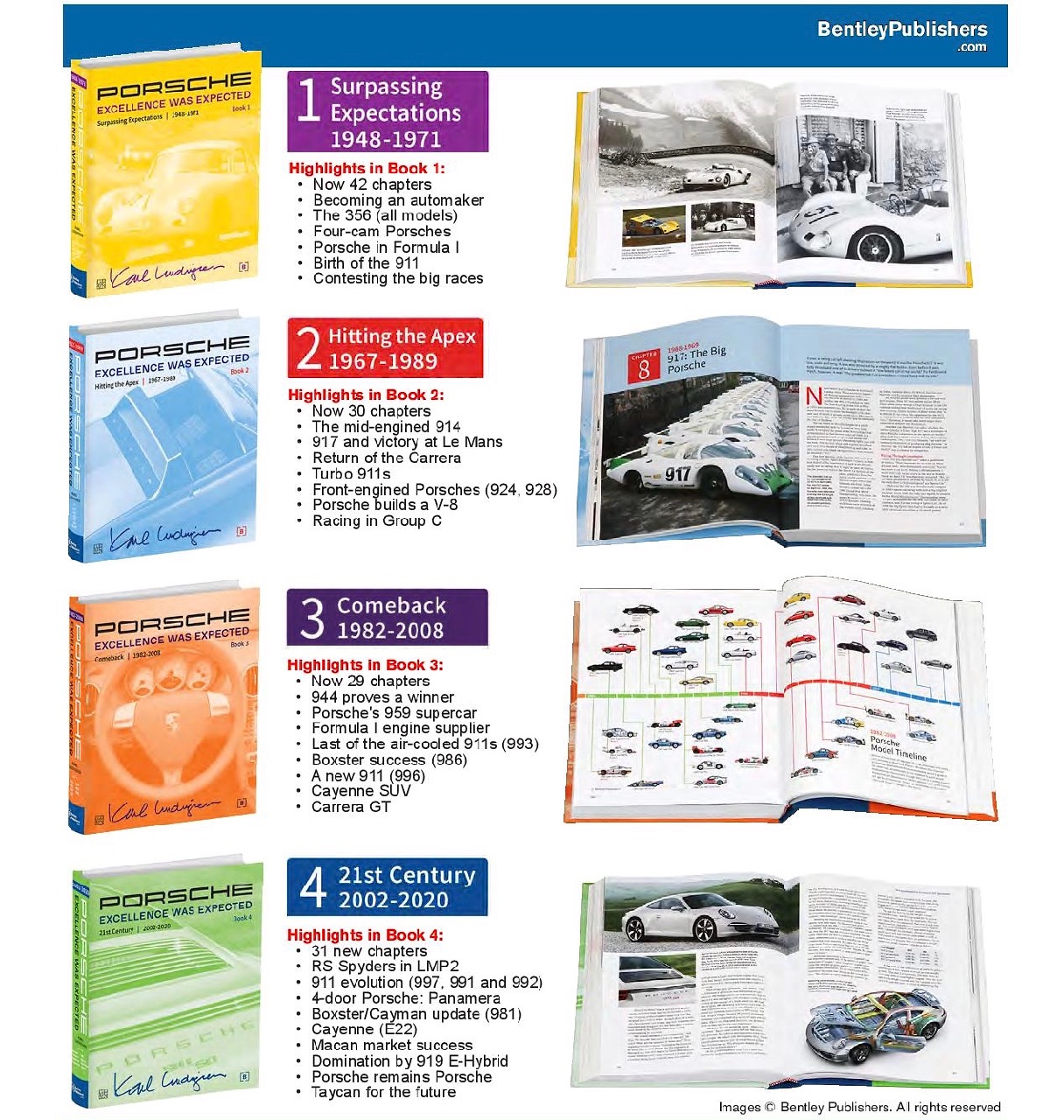 “Most dramatically, indeed sensationally,” added Ludvigsen, “ the new PORSCHE: EXCELLENCE WAS EXPECTED! reveals the full truth of the creation of the Porsche 901/911. It uncovers a secret that Porsche has successfully kept until now—that it expended time, effort and money on the creation of a larger two-plus-two passenger car as a senior model to accompany the 356 and expand its market coverage. From the failure of this project—never admitted by Porsche—came the 911.”

Author Karl Ludvigsen is among today’s most respected auto- motive historians. He has served as technical editor of Auto Age and Sports Cars Illustrated magazines, as east coast editor of Motor Trend and as editor of Car and Driver. He is the author, co-author or editor of over four dozen books about cars and the motor industry and was awarded the Friend of Automotive History award by the Society of Automotive Historians.