Skip to content
‘I want one,’ blogs Dan Scanlan, after a week of fun & sun in Porsche’s Gen Six
9114S droptop! 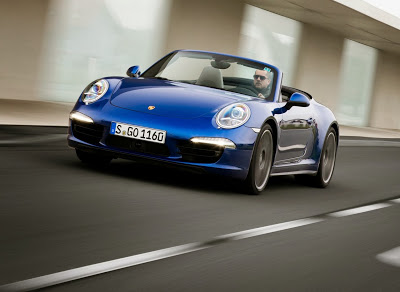 Porsche’s iconic rear-engine sports car, born off the first VW Bug and its Porsche 356 kin, hits the big FIVE-O this year. And to celebrate, I got a beautiful ‘13 911 Carrera 4S Cab with – wait for it – a remote key fob shaped like it, and painted the same Aqua Blue Metallic.

The seventh-generation 911 shares DNA with the first one, code-named 901, until Peugeot had a hissy fit. The flat six engine is in back, the gas cap is in front, the ignition is on the left of the steering wheel for those traditional 24 Hours of Le Mans starts, and it has that sleek nose/humpback shape that still says “911.” It is longer and wider (175.6 Gen 5 vs. 178.6 inch Gen 6 length/92.5 vs. 96.5 inch wheelbase), with more power and tech including electric steering. It’s also lighter. So is the newest 911 a worthy heir, or does it miss by a hair? 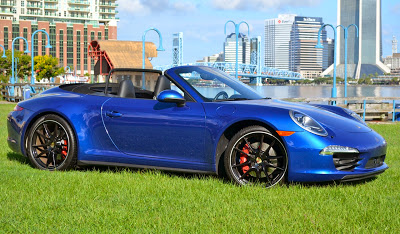 The Porsche 911 may be the only 50-year-old at the party that still looks like the same brash teenager who crashed the gate in 1964, albeit one with a comprehensive facelift and lots of time in the gym. The overall shape is the same, the black cloth convertible top designed to closely mimic the coupe’s hardtop. With that top, the car looks very low and Speedster-ish. 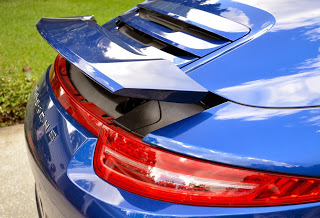 The 911 Carrera 4S has a 1.7-inch-wider rear section with halfway-to-Turbo-sized wheel arches and a new taillight panel under the tail spoiler. It connects inset dagger-shaped LED taillights with a bright thin red stripe.

The black cloth top, with solid panels and magnesium bows, opens or closes in 13 seconds while driving up to about 30-mph. Top up, it looks almost chopped hot rod in its sleekness. Down, it folds flat, its leading edge becoming the semi-hard tonneau. A small tail spoiler deploys at 75 mph and drops at 50. But don’t try to open the engine cover. The 911 Cab offers only a U-shaped collar that rises up and back to uncover cooling fans and two vital fluid caps – that’s it. All in all, this is a very muscular and slightly menacing look, especially on wide black wheels. It stopped traffic as eyes followed it downtown and at a car cruise-in, while school kids yelled “Cool car, man” as I drove by. 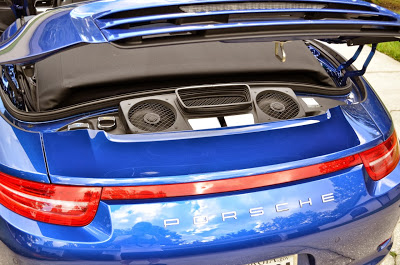 There’s keyless entry, then you step over an alloy sill plate, the word “Carrera 4” illuminated in white. You settle into a form-fitting high-back black leather bucket seat with 14-way power adjustments, power height-adjustable lumbar and heating and cooling. They were very supportive and comfortable, facing a three-spoke steering wheel with a fat stitched leather-clad rim and three alloy spokes with long, usable paddle shifters behind. Indicators light up in the upper spokes when you activate Sport, Sport Plus and Launch Control. 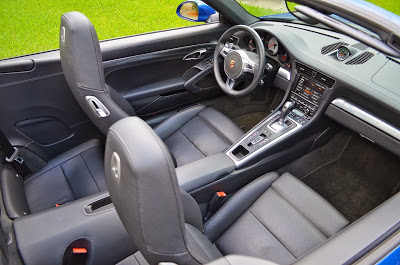 Under the nicely finished insulated top is a black leather-clad interior with aluminum accents. There’s a big 9,000-rpm tach with inset digital speedometer. To the left, a 200-mph speedometer plus oil temp and pressure gauges. To the right is a multi-function screen that can display all-wheel drive status, vehicle status, audio, telephone, navigation, map, trip computer and tire pressure. The Sport Chrono option gave us a G-force reading. The dash center is a seven-inch touch screen that shows navigation, traffic and weather, compass, fuel range, recorded lap times and a superb 445-watt BOSE AM-FM-CD-XM Satellite 12-speaker
sound system with a 100-watt sub-woofer. 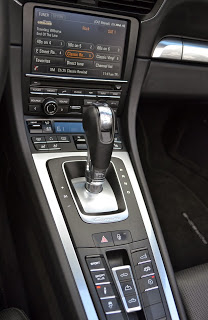 A wide Panamera-style console has buttons for rear spoiler; exhaust sound, power top/air deflector and Sport, Sport Plus, Sport suspension, traction/stability control and two acoustic options. A Sound Symposer activates an acoustic channel that directs a snarling engine intake sound into the cabin in Sport or Sport Plus. The Sport exhaust merges two exhaust lines for a less restrictive path out the Carrera 4S’s dual twin tailpipes, with a great pop and crackle when you back off the gas. It was especially cool top down in a tunnel or walled highway. And top down, wind buffeting was livable with the wind blocker up.

The Sport Chrono adds a chronometer on the dash, an elegant digital and analog clock with an orange second hand that starts running every time you unlock the car to tally total trip time. Back seats are tiny, usable for storage but not children.The small trunk is boxy and deep, good for soft luggage. 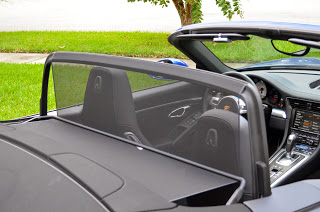 Porsche’s Adaptive Cruise Control kept distance and speed from cars ahead and used the front radar to avoid collisions, alerting the driver with sound, light and a brake pedal jolt. It will brake if you don’t! The cruise control brings the 911 to a full stop if the car ahead does, then you resume with a tap of the cruise control stalk or gas pedal.

Our Carrera 4S had launch control in Sport Plus – hold the brake, pedal to the metal and when the screen flashes “launch,” release the brake. Our 911 leaped ahead, all four wheels grabbing as we pulled .7G and hit 60-mph in a shattering 3.9 seconds and 100-mph in 10 with decisive shifts. The paddle shifters were big and easy to find when needed. For fuel efficiency, the engine shuts down at stop signs, firing up with a snarl as brake pedal pressure is eased. To save more, the clutch decouples when slowing down. Driven calmly, we averaged 21-mpg on Premium on mostly highway driving. Push hard and it was closer to an indicated 12-mpg. 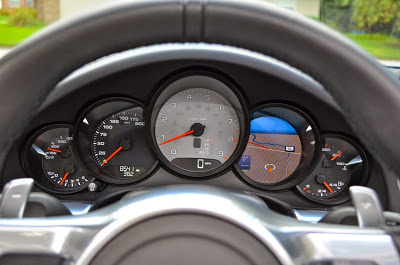 Our 4S also had Active Suspension Management, Dynamic Engine Mounts, Dynamic Chassis Control and Torque Vectoring, plus a 20-mm lower ride height. The result – a 1.05G skidpad number on the display, the 911 showing barely any body roll and no understeer as we powered around. Point and steer into a turn, put some power in on exit, and the tail stayed planted, displaying mostly rear-wheel-drive. In the wet, the rear tires could play a bit but front-wheel- drive did kick in according to the display. Even then, it never felt nervous; ready to oversteer. 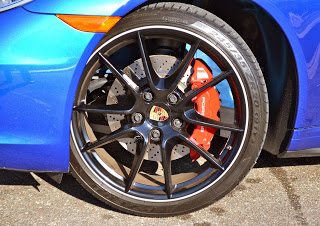