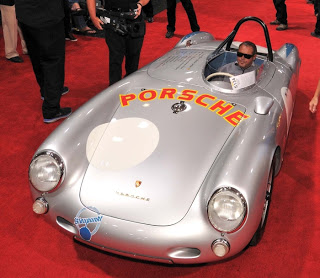 I confess that I am a muscle car guy.Can’t help it. I grew up cruising Mustangs and Torino’s on Saturday night and Sundays
at the strip. But after watching Mecum Auctions sell Porsche 550-0077, right, for over 3.7 million dollars at Monterey last weekend, I couldn’t help but be impressed with the little machine.

The 550 was Porsche’s first race-specific design. Introduced in Paris in 1953, the 550 was famously modeled after a series of home-built cars from racer Walter Glockler. It utilized a mid-engine layout and aerodynamic efficiency to squeeze the most out of a small engine. Porsche produced the first two prototypes in early-1953, using a ladder-style frame more suited to an early 20th century tractor than a modern sports car! 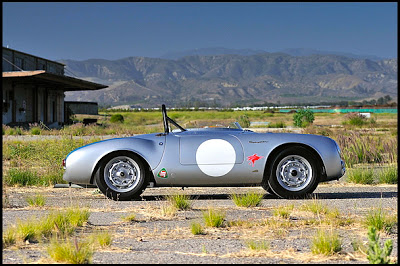 But the design took a massive leap forward with the third prototype when Porsche lowered the center of gravity by affixing the axles to the top of the frame rather than the bottom. This stroke of genius was improved further by making the center cross member bolt into place (rather than fixed by a permanent weld) to greatly simplify engine maintenance at the racetrack. The result was significantly reduced rear wheel lift under braking and superior
turn-in qualities upon entering a corner.

The new 550 scored a class win in its first outing in May 1953, followed two weeks later by a victory in the 1.5-liter Sports Class at Le Mans. The aerodynamically slippery 550 clocked 124 mph along the Mulsanne Straight despite its microscopic engine. 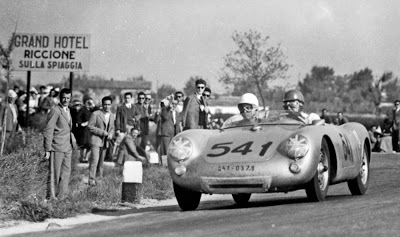 New cars were also produced in road-going versions, with many of them being imported into the USA in the early-1950s by folks such as California auto dealer and racer John von Neumann. The 550 was elite and rarely seen, with fewer than 150 produced by 1959.

One of them (chassis number 55) was purchased by actor James Dean, who was also a Porsche aficionado and aspiring racer. Dean traded in his bubble-shaped Porsche 356 for the newer 550 on September 21, 1955 and immediately entered it in the Salinas Road Race in early October. He would not live long enough to drive it in competition.

Just nine days after the purchase, Dean suffered a fatal automobile crash at Cholame Junction near the corner of California Routes 46 and 41. The highly publicized death of this Hollywood star forever sealed the unforgettable legacy of the Porsche 550, both on track and the street. 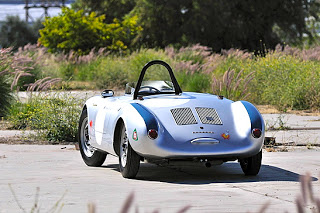 Today, 550s are among the most replicated cars in history with numerous aftermarket companies making home-built kits available for less than $50,000. Many of them have the look and feel of the original 550 with a few modern amenities to boot.

Genuine 550’s are still available as well, though prohibitively expensive. The most affordable versions are the 550As, the first cars with the improved space frame chassis. With no significant provenance, such cars occasionally come up for auction starting in the $200,000 range. Authentic 550s with a notable history sell for upwards of
one million dollars.

The most prized 550’s today are the racing versions with earlier serial numbers. The car sold at Mecum Monterey last weekend – chassis 550-0077 – is a prime example. This machine is believed to be the first racing 550 to be produced with Porsche’s improved, high-rigidity chassis designed for better cornering. It was built for Belgian racing driver Christian Goethals, who promptly put the car in the winner’s circle at the Grand Prix des Frontiers in 1956. After a successful racing career in Europe, the car was then shipped to the United States. Thomas Payne, who later became a factory driver at Shelby-American, raced it. 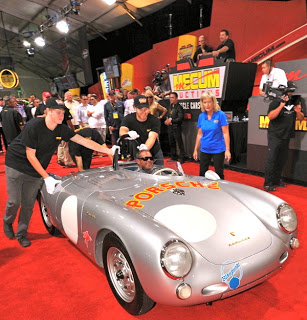 Porsche 550-0077 was one of the mega-stars of Mecum’s Monterey auction, which also included one of Nigel Mansell’s Formula One racecars and an authentic competition Shelby Cobra. The little Porsche drew massive crowds all weekend as well as spirited bidding that resulted in a sale for $3.75 million.

Despite the fact that it was desperately underpowered and introduced before a suitable engine was available for it, the Porsche 550 remains an amazing street machine with a legendary racing history littered with victories from Le Mans to the Targa Florio.

Even a muscle car guy can appreciate that!

Stephen Cox is also a racer and is sponsored by http://www.boschett-timepieces.com/