Porsche calls it the ’20 Taycan Turbo, although there’s no forced induction in this sleek four-door sports sedan. Heck, there’s not even an engine, as we know it in the PLUG-IN PORSCHE: TAYCAN TURBO, blogs Dan Scanlan. 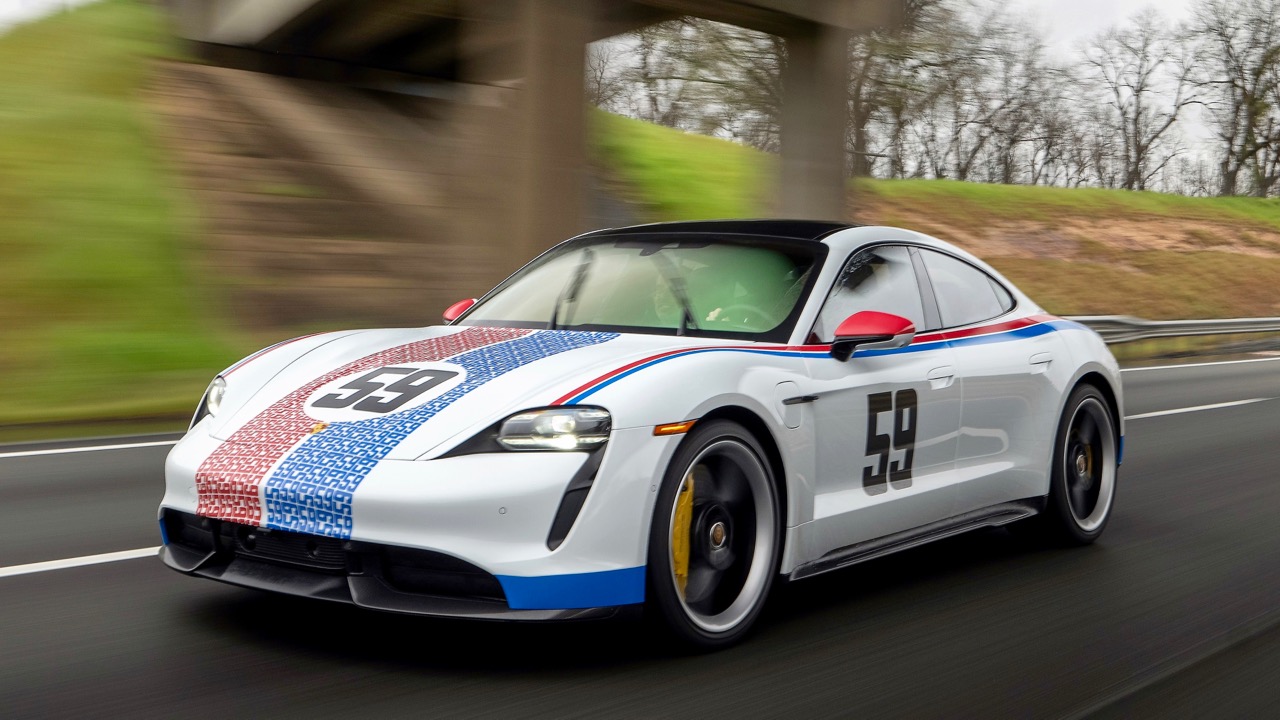 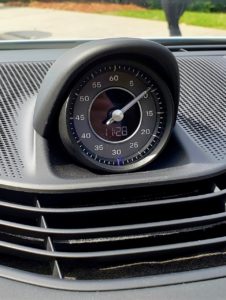 In this modern world where an electric car’s horsepower is listed as kilowatts, our Taycan tester scores into the Supercar range. It generated up to 500 kW, or 670 horsepower, with a massive 774 pound-feet of torque, and was capable of a head-snapping, launch-controlled run to 60 mph in just under 3 seconds. The ‘20 Porsche 911 Turbo has only 641-horsepower from its 3.8-liter twin-turbo flat-six, and does 60 mph a hair faster – about 2.5 seconds. PLUG-IN PORSCHE: TAYCAN TURBO S wearing Brumos Racing’s iconic No. 59 heading to the Amelia Concours. Photo: Porsche Cars NA.

Porsche rolled out special Taycans during the recent 25th annual Amelia Island Concours d’Elegance, one in red and blue with the iconic Brumos No. 59 on it; another in the red and white-striped colors of the Salzburg Porsche 917K that won 1970s 24 Hours of Le Mans; and a third in the pink butcher-cut design of the 917/20 “Pink Pig.” We could also get seat time in a white pre-production, plug-in Taycan (pronounced Tie-con) Turbo. So I did, finding out why Taycan means “lively young horse.”

The Taycan Turbo has electric motors at each axle for a combined 460 kW, or 616 horsepower in normal use. The front motor has a one-speed planetary gear with overall 8:1 ratio to a lightweight differential. The rear had a two-speed transmission, vs. direct drive in other EVs. First gear was for acceleration from a standing start. The long second gear comes in early, the shift barely heard as it lets the Taycan attain top speed via electric all-wheel drive with torque vectoring and traction management. 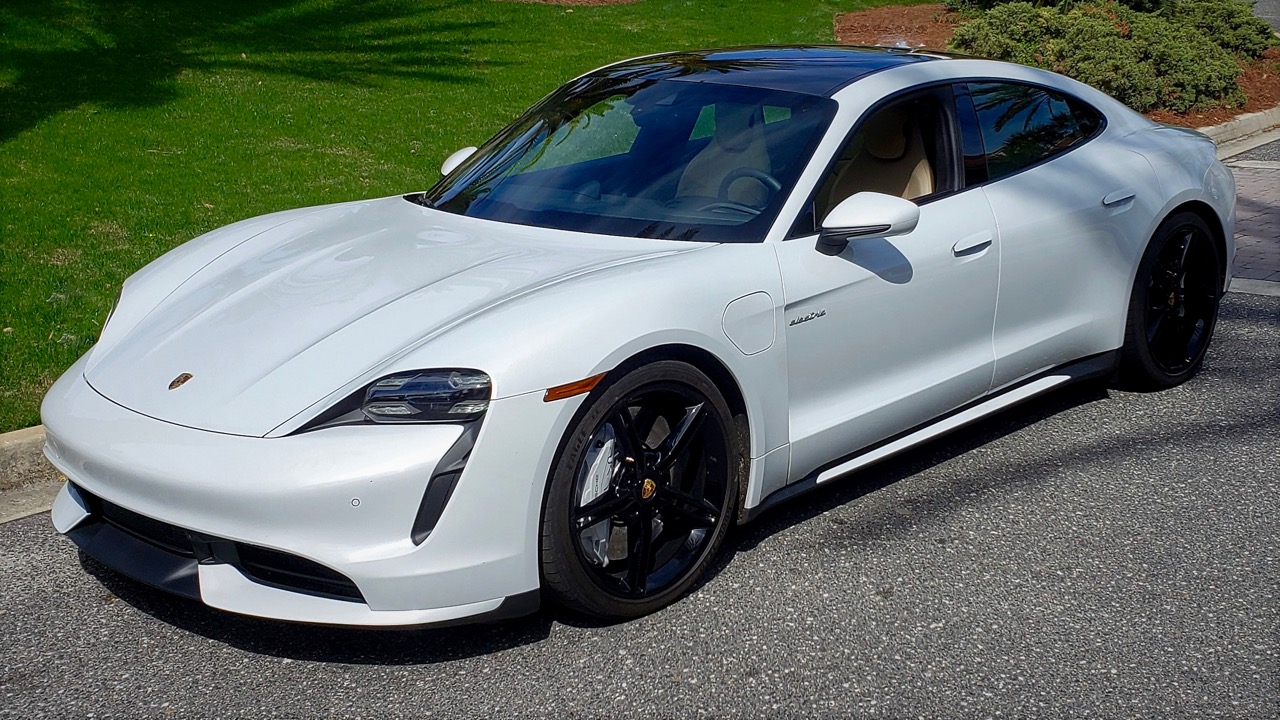 Hit it in Sport Plus, and electric torque was immediate, hitting 60 mph in just over 3 seconds. Launch control puts it in “overboost” – 670 horsepower and 774 pound-feet of torque. Left-foot brake, and it signals “Hold” on the dash. Floor the throttle and “Launch Control Activated” pops on the screen, so we jumped off the brake.

Torque hit so hard my head snapped back and bounced off the seat. It took only a surprised breath – 2.9 seconds – to see 60 mph, acceleration harder than anything I’ve tested except a 729-horsepower Lamborghini Aventador’s 2.8 seconds. I sensed a bit of wheelspin as Taycan power poured into the rubber on both launch control runs, feeling all-wheel-drive torque vectoring as the highly accurate and well-weighted steering helped easily keep us straight. It gripped hard with no torque steer. When Porsche’s co-driver asked if I felt the two-speed transmission shift; I said no, because I had been yelling OMG! A Tesla Model S Performance can hit 60 mph in 2.8 seconds, we hear. 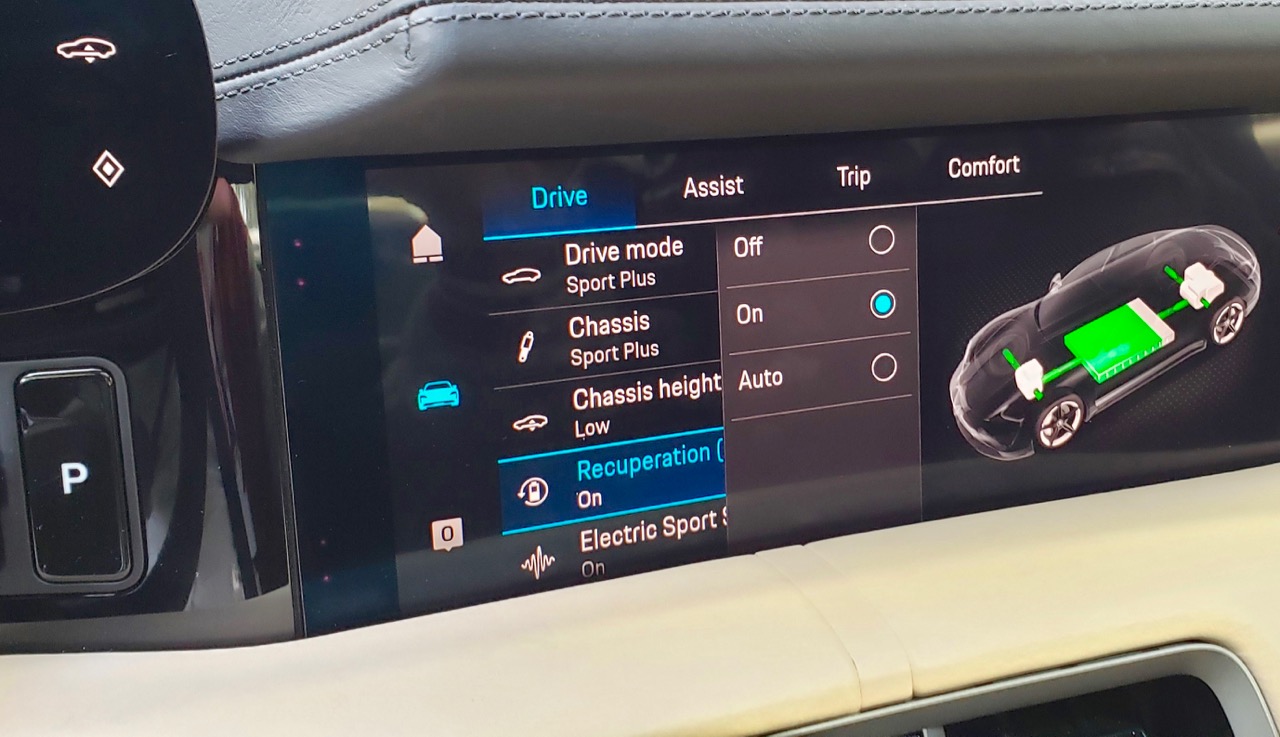 PLUG-IN PORSCHE: TAYCAN TURBO has Range, Normal, Sport, Sport Plus and Individual drive modes. Range keeps it in more efficient second gear and cuts the front motor. Normal prioritizes second gear, but grabs first if you demand passing power. Sport/Sport Plus uses both motors and first gear up to about 60 mph, and then upshifts. Our car’s Performance battery had 93.4 kWh, and it boasted a top speed of 161 mph.

The Taycan has batteries (800-volt vs. other EV’s 400) set down in the chassis for a low center of gravity. There’s fully independent aluminum suspension, double wishbone in front, and multi-link in back with adaptive air springs and Active Suspension Management. Air suspension let us raise it .8 inches to clear driveways. It drops down .4 inches in Sport (or over 56 mph) for better aero. In Sport Plus, it drops another half-inch for even cleaner running, plus downforce as the tail spoiler tips up more. It’s a very agile car that felt flat and glued to the road everywhere we went. Active Suspension and Chassis Control adjusted handling and ride based on my driving, speed and road conditions, lateral motions absorbed as anti-roll bars react in just 200 milliseconds and quell lean, feeling almost flat in corners. 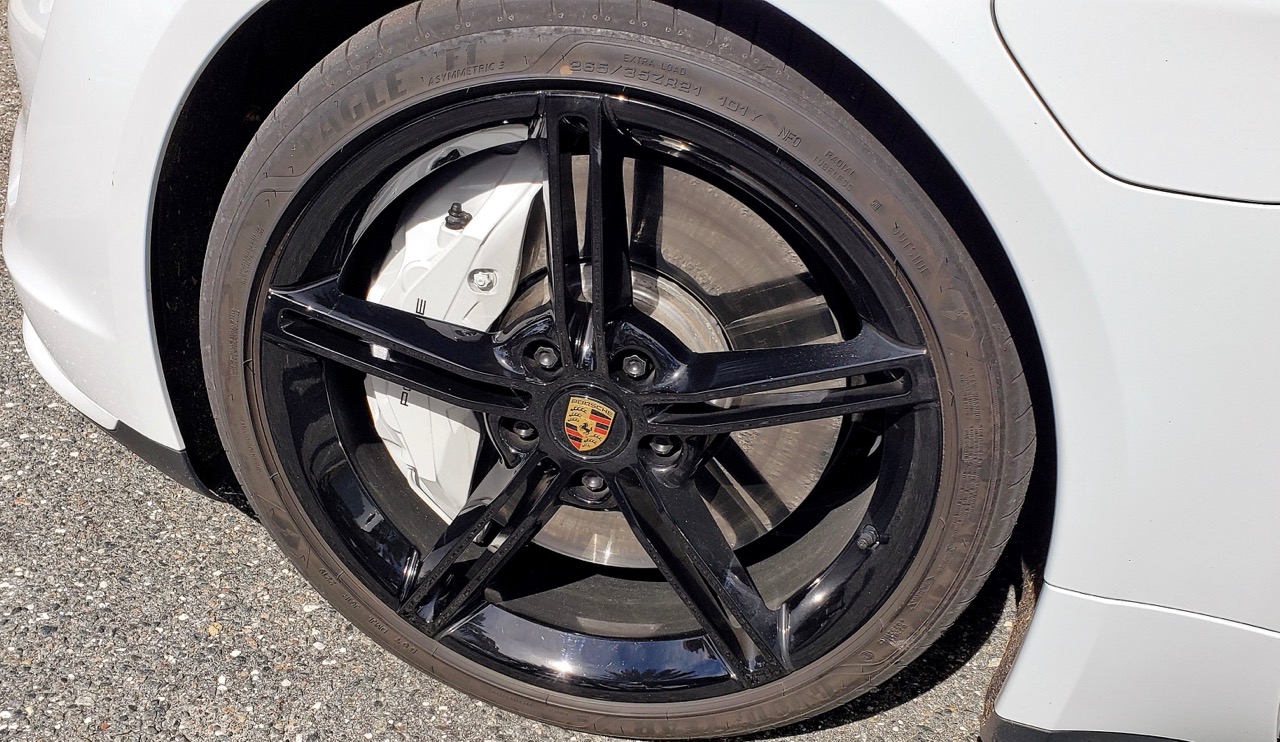 Sport Plus steering was extremely direct and full of feel. Rear-axle steering goes up to 2.8 degrees in the opposite direction to the front wheels under 30 mph to help corner. On the highway, the rears steer in the same direction as the fronts for more stable moves. The brake pedal bit cleanly and quickly for very fast and stable stops with no nosedive. It goes and moves like a Porsche, belying its 2.5-ton weight to offer serious grace and pace. 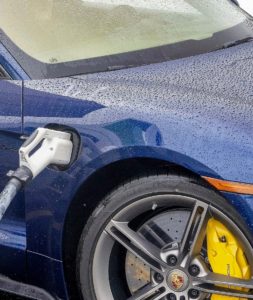 Our car’s Performance Battery Plus offered a charged range of 236 to 280 miles. Starting with a full charge, our Taycan had done about 60 miles of hard driving by the time I got it. An indicated 170-mile-range was left after my 5-mile test. It can be charged with 110 or 220-volt systems. But its 800-volt system allows a very quick 5-minute charge at a DC high-power 800-volt charging station for a 60 mile range. An 80 percent charge comes in about 23 minutes, Porsche said. You can “fill up” slower at home via 110- or 220-volts, or quickly at about 300 Electrify America DC charging stations in 42 states that handle its 800-volt system. Charging ports are on the left and right front fenders. Both can charge via alternating current, the right sides also taking that quicker direct current.

Most EVs use regenerative braking, where electric motors become generators as you back off the pedal, regeneration drag used to brake the car. The Taycan mostly only regens when you brake, designed to coast to reserve power, braking only flowing a bit back to battery. You barely feel regen when lifting off the accelerator. 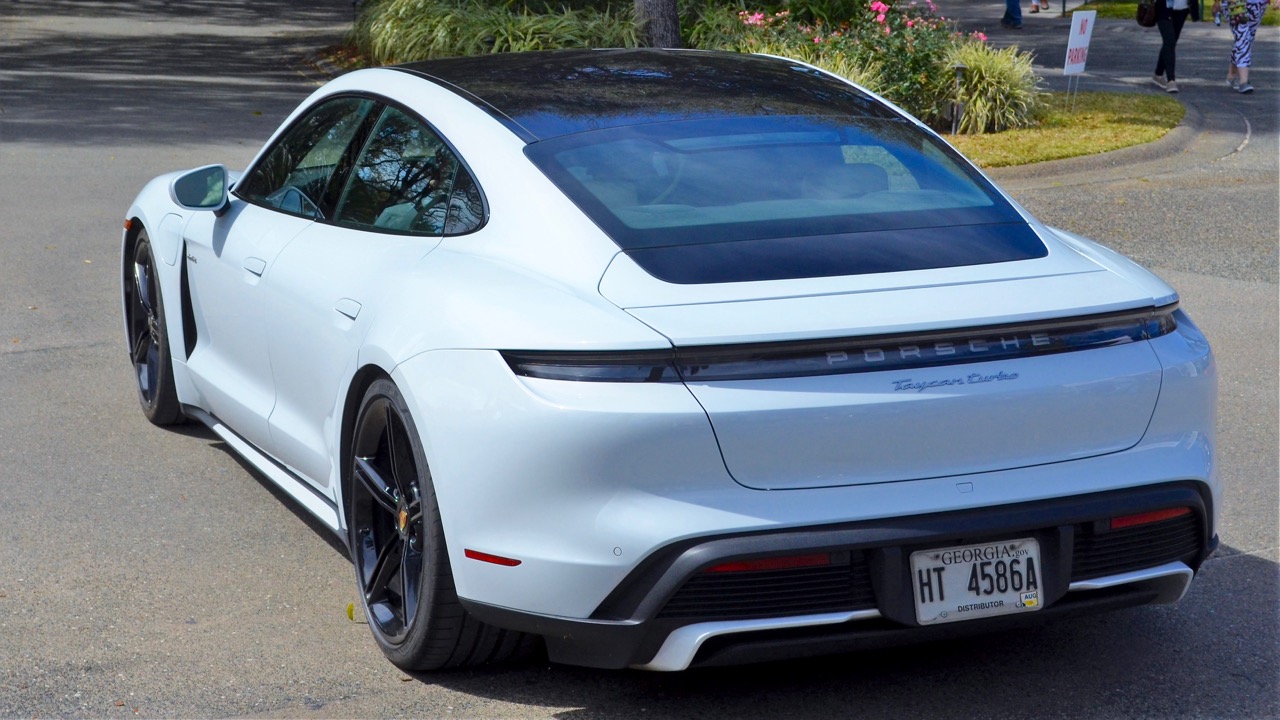 Taycan’s long curved greenhouse tapers to an almost 911-like tail with gracefully thin back pillars between sculpted fender shoulders. That 911 look continues with a near-fastback rear window and wrap-around LED taillights. An adaptive rear spoiler extends in stages, while aerodynamic trays smooth out the underside. Slim door handles are flat when not in use, then extend as needed. There’s a Panamera feel to the car, but stretched, curved and smoothed over a long wheelbase that’s two inches less than its gas cousin. The Taycan is also three inches shorter and two inches lower than Panamera. 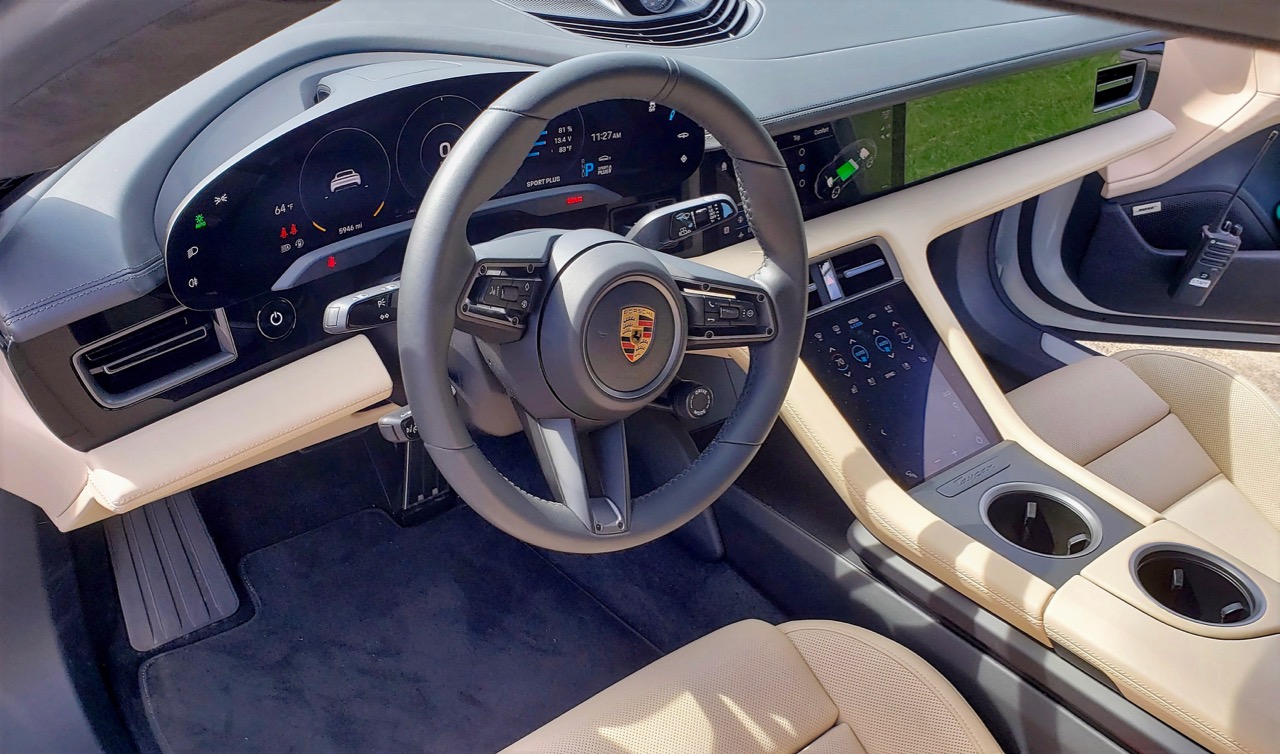 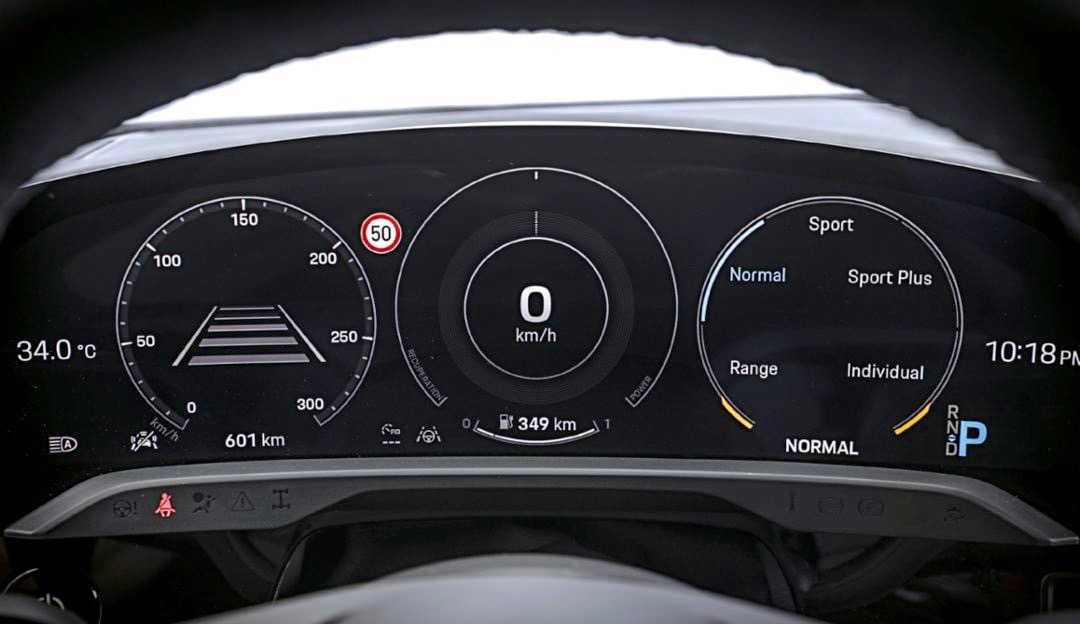 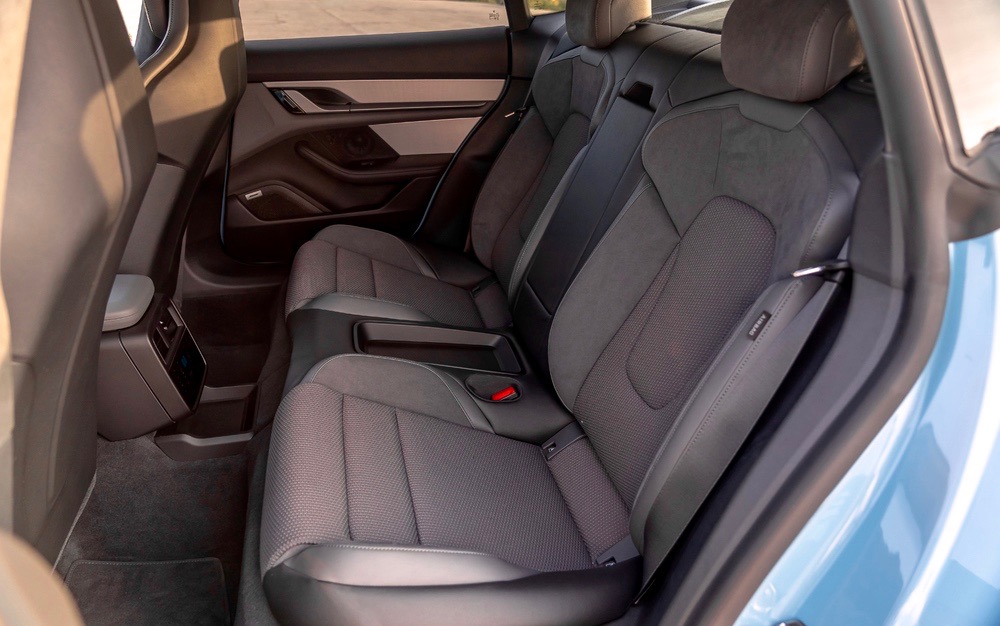 The 16-way front bucket seats were very supportive and comfortable. The Taycan was quiet at speed, no wind or tire noise heard. Switch on Electric Sport Sound, and recordings of Taycan’s inverter, motor and other moving parts play back as they would at speed, without wind or road noise. It was cool – a neat rumbling hum at idle, then a sporty sci-fi turbine-like whine that changed as it accelerated. It added to the sports car feel, futuristic yet properly sporty. The rear window is slim and bit tight on vision. The twin rear buckets seats offered minimal legroom, better to use them to augment the usable 12.9-cu.-foot trunk and tiny 911-like 2.8-cu-ft trunk up front.

Final thought: This is an electrifying sports sedan that sounds, goes and feels like what a Porsche EV should.

For more information about the PLUG-IN PORSCHE: TAYCAN TURBO and the latest luxury-sports vehicles from Porsche, please visit  https://www.porsche.com/usa/