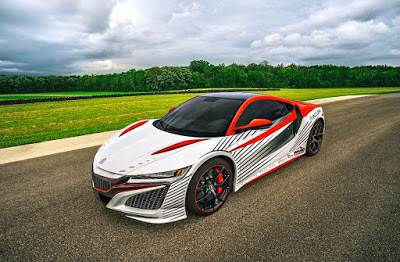 All new Acura NSX supercar will serve as the official pace car in the 93rd running of the Broadmoor Pikes Peak International Hill Climb on June 28. With a custom racing-inspired livery, the twin-turbo NSX will lead 140 entrants to the top of the 14,110-foot mountain.

“The Acura NSX is the ultimate performance vehicle, and a novel way to promote its capabilities is the iconic race up Pikes Peak,” said Mike Accavitti, senior vice president and general manager of the Acura Division. “As the pace car, the beast that is NSX has yet to be fully let out of its cage, but fans and drivers will get a first glimpse of the unique character, performance and handling it will deliver in this one-of-a-kind racing environment.” 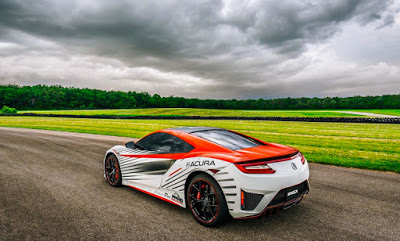 The pace car was specially prepared for the race by Honda R&D Americas, Inc., which is also leading the global development of the NSX. The supercar will be driven by Sage Marie, senior manager of American Honda Public Relations, and a two-time Pikes Peak competitor and road racer. Marie won the first Pirelli World Challenge B-Spec race in 2012 and has raced in several other major motorsports events, including the 2013 and 2014 Pikes Peak Hill Climb. 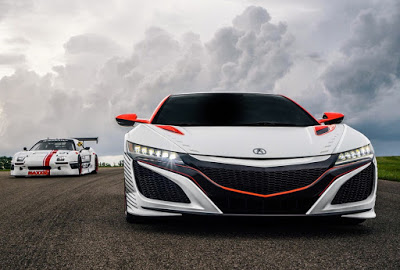 In a Pikes Peak first, Acura will install 24 cameras along the course to capture the NSX’s historic run as the official pace car with a 360-degree series of images of supercar. Fans can head to Acura’s social media channels – https://instagram.com/acura/?hl=en  https://twitter.com/acura  https://www.facebook.com/Acura  https://plus.google.com/+acura/posts  https://www.youtube.com/user/Acura  – where the images will be transformed into to an exclusive video, after the NSX heads to the top of the mountain at 7:40 a.m. MDT. Additionally, the run will be covered live on Acura social media channels.

For those able to attend Pikes Peak in person, the NSX will be available for viewing at a number of pre-race activities including the event’s media day and VIP reception in Colorado Springs on Thursday, June 25, and at the popular Fan Fest in downtown Colorado Springs, 5–10 p.m. MDT on Friday, June 26. The NSX is one of four Acura models making the Pikes Peak run, which also includes the Acura ILX and TLX sports sedans and a previous generation NSX.