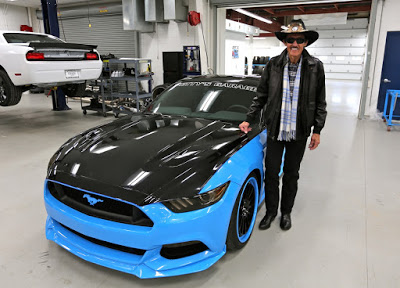 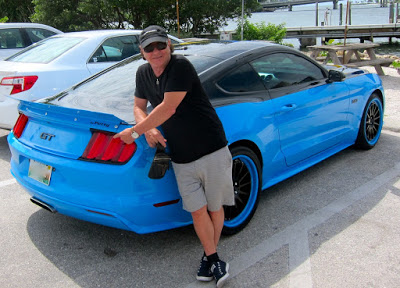 Sarasota Café Racer Brian Johnson, above, called me with an offer I couldn’t refuse. “Marty, come over to the house and we’ll go to lunch in my new kick-ass Mustang, the actual first built Stage 2 Petty Mustang. It’s vicious. You drive and I’ll pick up the lunch tab. And, please let’s stay out of jail!”

Well, we stayed out of jail primarily because we were lucky. There’s nothing stealth about his Mustang, from its in-your-face Petty Blue and black exterior to its raucous exhaust note that really sings when the tach starts to go north of 4,000 rpm. Even when you’re standing still and idling at a light, it broadcasts its intentions: Let’s run! 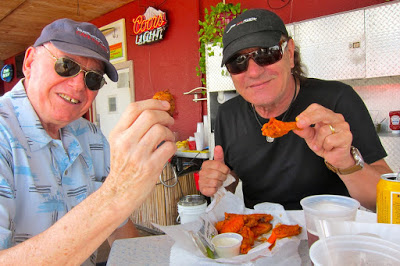 Like a road racing car, Brian’s Mustang’s first gear was useless for other than pulling out of your driveway or rolling away from a stop. The action was all in 2nd and 3rd, bouncing the tach needle off the redline; what a sweet song it sings! We drove, we ate on the water at the Old Salty Dog, above, and we drove some more. Best of all, we made it back to Brian’s house without pissing off local law enforcement.

King Richards’s potent pony was one of the more striking custom Mustangs at the SEMA Show last year, and now the ’15 Mustang is sold out. Orders are being taken for 2016 models. 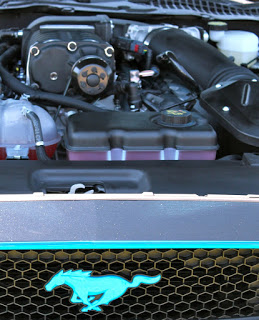 The special edition Mustang came in either Stage 1 or Stage 2 trim. While it’s called Stage 1, it isn’t the cheap seats. It gets a near full-boat of performance and visual upgrades and sports 20-inch Petty’s Garage HRE FlowForm wheels shod with Continental tires, a custom Petty’s Garage front fascia, a unique rear spoiler and center exhaust by MagnaFlow.

Extra grunt comes from a Ford Racing/Roush supercharger and cold air intake for 627 total horsepower. The interior gets custom embroidery, floor mats and Richard Petty’s signature on the dash. With 100 produced, Stage 1 Mustangs were available in any Mustang color and priced at $62,210. 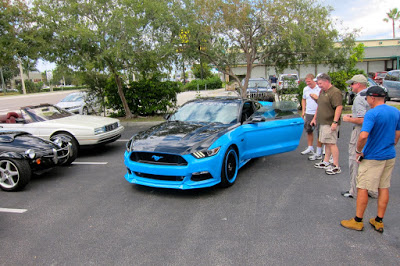 Stepping up to the Stage 2, like Brian Johnson did, got you Petty’s Garage Wilwood  brakes, HRE three-piece forged-aluminum wheels and that signature two-tone paint. Only 43 of the Stage 2 versions, priced at $92,210 and finished in a pearlescent blend of both Petty Blue and Tuxedo Black with the number 43 ghosted into the hood and C-pillar, were produced. Brian Johnson’s Mustang came in at $95,000. 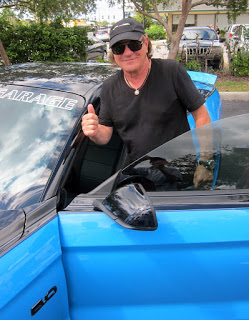 Of the 43 built and sold, rocker Brian Johnson, put his name on the first one. “This Mustang has just taken my breath away,” said Johnson, lead singer for AC/DC. “It really is one of the coolest cars I’ve ever driven. I didn’t have an American car, but I do now!”