Skip to content
Stephen Cox blogs about the most iconic of the thundering Turbo Porsche 917s.
Part IV: The Embarrassment. 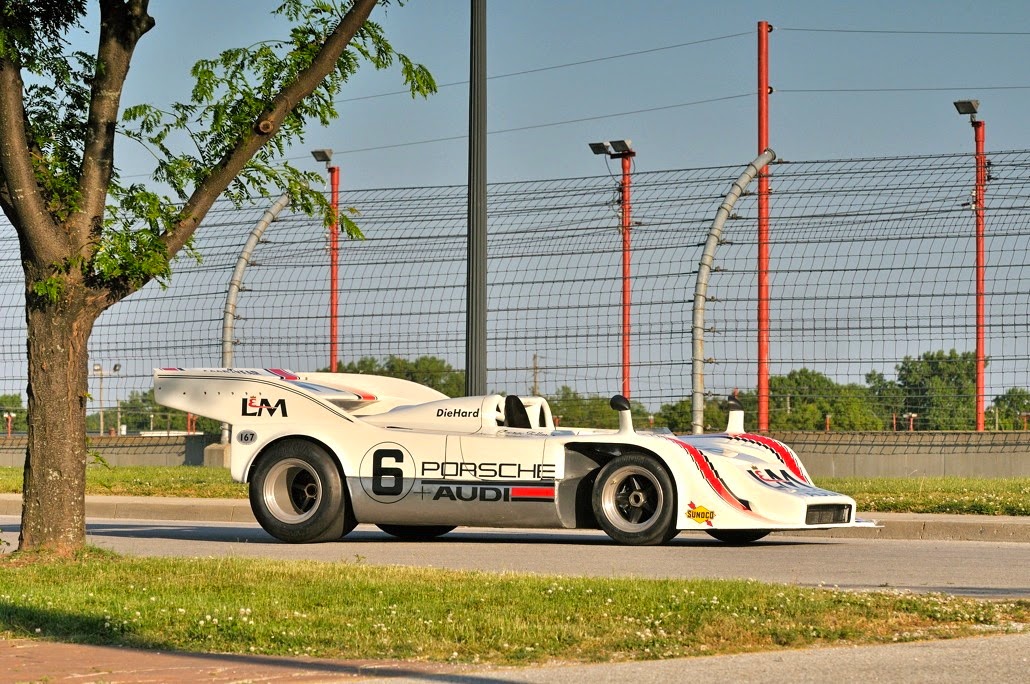 “I had a five-liter, naturally-aspirated nothing.” – George Follmer

With what appeared to be a fully developed, dominant racecar, Porsche was ready for their public unveiling. They chose the third race of the season at Watkins Glen as their moment of truth. After all, everything seemed perfect. The teething problems with the L&M Porsche’s turbocharger dump valve at Mosport surely wouldn’t happen again. The loss of the magnesium car didn’t seem to be as bad a setback as expected. The standard 917/10-003 was clearly superior to McLaren’s new M20.

Donohue’s loss was certainly disappointing, but Follmer had shown that he was fast and capable. He’d won Road Atlanta against all odds with zero seat time in the car.

Denny Hulme’s car had been totally destroyed at Road Atlanta and McLaren had been forced to build a new car from scratch in less than nine days. The new car was unproven and untested and the previous version of the same design had already suffered problems with both the crankshaft and ignition system.

The stage was set. The Watkins Glen race presented a golden opportunity that Porsche couldn’t pass up, so they threw everything they had into it. The race was to be one giant party, and its epicenter would be the Glen Motor Inn. 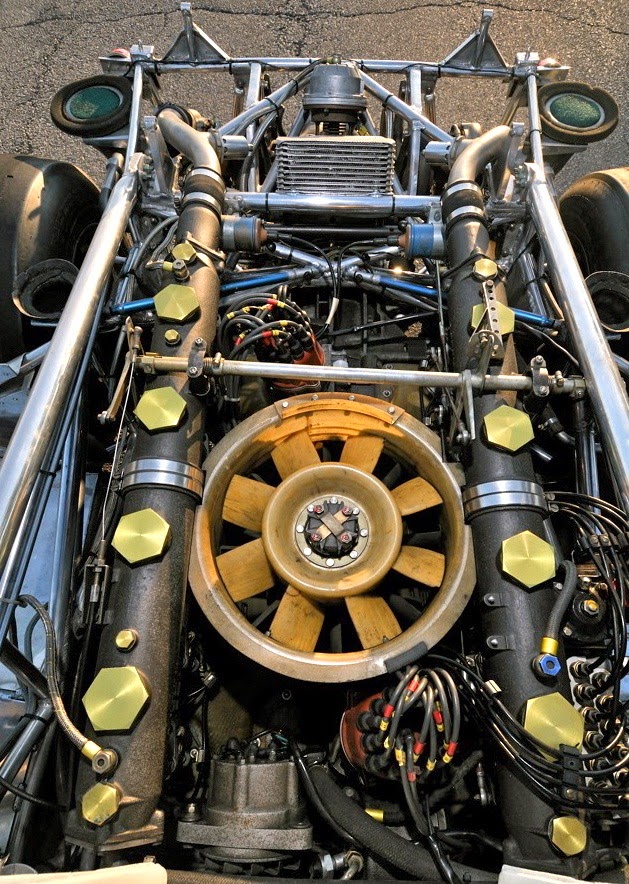 Owned by the Franzese family, the scenic Glen Motor Inn overlooked Seneca Lake and was located barely five minutes from the racetrack. Nearly all of the teams stayed there. Even today, the same family owns the motel and signed photos of all the legendary Can-Am drivers still hang from the walls of the bar.

Penske’s crew enjoyed dinner downstairs at the motel’s Montage Italian Restaurant, whose specialty was the Bravo Burger with Fontina cheese. Drinks were served at all hours in the bar area. The driver’s wives and girlfriends would hold  pool parties in the middle of the night.

Many of Porsche’s front office executives made the trip to the Watkins Glen celebration. Engineers and members of the Porsche family were flown in from Germany. The German press was invited to the event and showed up in force. Photographers and journalists worldwide were put on notice that Porsche’s new 917/10 was taking center stage at this race.

Woodard recalled, “We knew the big guys were gonna be there. But they stayed out of our way. Roger dealt with those types… but Mark wasn’t there for technical support or driver support. Maybe the Porsche hierarchy that was there made George nervous, I don’t know.”

“We were all nervous, “ Follmer agreed. “We wanted to do well and we should have done well. But we didn’t have Mark there. It was his car. He knew that car better than anybody.”

In practice it was clear that the L&M Porsche was unbalanced. It picked up an understeer condition at the entry of the corners, meaning that the front tires failed to hold traction and “pushed” forward much like a street car plowing through snow.

With an engine producing well beyond 1,000 horsepower, the L&M Porsche could easily be induced into oversteer by simply stomping the throttle at any speed. Making matters worse was the car’s short wheelbase, which made the car twitchy and gave the driver precious little time to react to whatever the car was doing.

The result was a disaster. The car understeered into the corners and flicked into a wicked oversteer condition under acceleration. Follmer struggled to stay in the top five throughout practice. Both McLarens were quicker. They set new overall track records by beating the previous times established by Formula One competitors.

Jackie Oliver’s Chevy-powered Shadow Mk3 was right there as well. David Hobbs’ Lola and Francois Cevert’s McLaren M8F were posing serious threats. Even Greg Young of the Young American Racing Team was within shooting distance of the proud Penske organization. Porsche representatives were stunned. Their car appeared to be shockingly mortal after all. 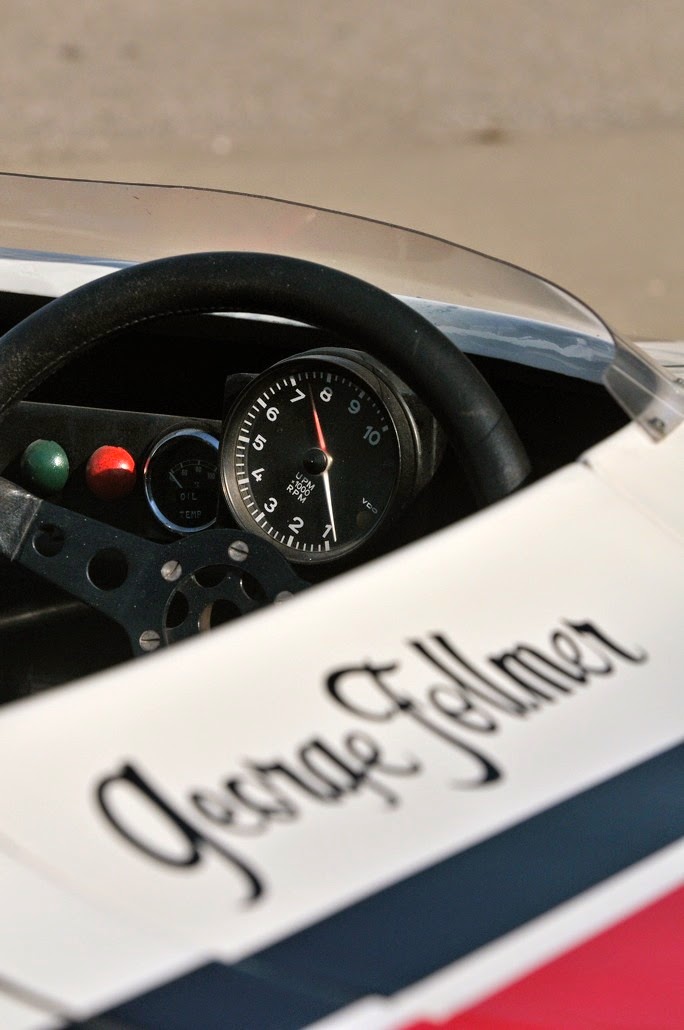 Follmer recalled the difficulties of the day:

“If anything could go wrong, it went wrong.
First of all, I didn’t know the car as well as I should have. We had a lot of understeer and couldn’t seem to get it out. We really didn’t know what to do.

We didn’t want to start experimenting because here we were with all the Porsche brass around. Woody was scratching his head because he wasn’t sure. Mark knew all these things and if he was there he would have recognized it and taken care of it.

But I didn’t know that much about it and I didn’t want to come in and act like I knew what I was talking about. I could have made it worse.”

Time trials didn’t go well. Follmer qualified Third in the 23-car field. That may have been an outstanding effort by any other barometer, but it didn’t measure up to the expectations of Porsche executives who had traveled from Europe to showcase their company with a win. To them, anything less than a win from the pole was a train wreck!

Race day – Sunday, July 23rd – was warm and sunny. Short sleeves and sunglasses were the order of the day. Most of the seats were filled. Dunlop Tires, Chevrolet, Kendall Motor Oil and many other companies had purchased signage along the top of the buildings that lined the pit lane where thousands of eyes would be trained all day.

A few of the seats immediately overlooking the pit lane were still available. Only three rows deep, most were reserved for Porsche representatives and other special guests. They were among the most coveted seats at the track. The row of multi-national flags that extended the length of pit road snapped in a brisk breeze. The Penske/Porsche pit area, in particular, was crowded with photographers and cameramen.

The green flag fell and the McLarens simply drove away from Follmer!

Then mechanical problems set in. The L&M Porsche lost considerable power. David Hobbs and Francois Cevert, neither of whom could compete with Penske at Road Atlanta, roared past while Follmer struggled frantically to determine why his engine was producing barely half its real power. The turbos refused to kick in no matter how hard he drove the car.

It soon became obvious that the unthinkable – an unscheduled pit stop – was no longer avoidable. With the most important people from Porsche watching just yards away, 917/10-003 trundled slowly down pit lane to a stop right in front of the Dunlop Tires sign.

As the rest of the field continued to put laps on Penske’s humiliated team, the rear cowling was removed and the crew searched for the problem. Once again, the turbocharger “dump valve” had stuck open and the turbo boost was simply evacuating into the atmosphere instead of pumping pressure into the engine.

Follmer said he was driving “a five-liter, naturally-aspirated nothing.”

He was in a very difficult political position. Donohue had already experienced the same problem at Mosport and would have recognized the problem instantly. Follmer did not, through no fault of his own. The car was still new to him, as were its peculiarities and problems.

Woodard used cleaning fluid to wipe the special lubricant off the dump valve, as well as the dirt it attracted. The valve began to function once again and the turbochargers spooled up perfectly. Follmer was sent back into the fray but by this time the damage was done.

The team finished a distant Fifth, two laps off the pace. They were thoroughly whipped by the Gulf McLarens of Hulme and Revson who led every lap and finished First and Second.

The team had reached its lowest ebb.

Follmer recalls, “What it was, now that I’ve had a few years to look at it, was I had too much wing. The wing should have been laid back more and it would have loosened up the rear end.
The car would have been more neutral and we would have been fine. It was just that simple
but we didn’t get it done. It was a mess. Anything that could go wrong, went wrong.”

Woodard said, “George just couldn’t get comfortable in the car. It was the worst finish for that car at Watkins Glen, in front of all the Porsche brass. That was… a bit embarrassing.”